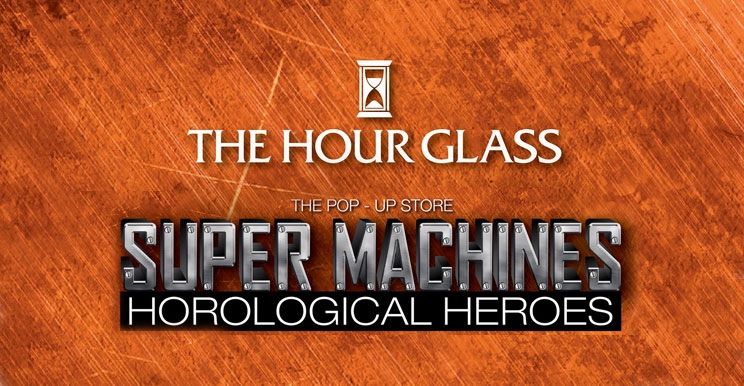 THE GENESIS OF CONTEMPORARY HOROLOGICAL CULTURE

The Hour Glass will unveil another groundbreaking project in the form of a pop-up store situated at the heart of Orchard Road at leading shopping centre, Paragon from 18th to 30th September. Themed “Super Machines and Horological Heroes”, this pop-up will stage some of the most iconic and avant-garde timepieces, paying homage to a collective of individuals who revolutionised watchmaking and watch design at the turn of the millennium.

Coinciding with the Singapore Formula One Grand Prix Race weekend, “Super Machines and Horological Heroes” will offer a unique cultural experience to both locals and out-of-town guests during the 13-day showcase at the Main Atrium of Paragon shopping centre.

“The Hour Glass is delighted to present its first global pop-up store. Our desire is to celebrate the best in contemporary horology and watchmaking of the past decade. And to do so by creating a unique temporal platform where The Hour Glass will both curate and unveil a series of exceptional avant-garde horological machines, many of which have been exclusively created for The Hour Glass,” commented Ms Wong Mei Ling, Managing Director of The Hour Glass Singapore.

She continues, “We have strategically timed “Super Machines and Horological Heroes” when Singapore plays host to the world’s most prestigious international motor sporting event – the Formula One Grand Prix. We believe this initiative will ultimately inspire and cultivate the appreciation of contemporary horology in Singapore and beyond.”

A ‘Playground’ where Inspiration Meets Manifestation

Stemming from The Hour Glass’ reputation as a pioneering stalwart in promotion and development of contemporary horological culture around the world, “Super Machines and Horological Heroes” is another manifestation of this mission.

“Super Machines and Horological Heroes” seeks to play out the virtuosity of visionary watchmakers and profiling their technically innovative masterpieces. Since the dawn of the new millennium heralding the birth of contemporary watchmaking: a period where visionaries sought to define a new path for horology with a respect for patrimony whilst shaking design conventions of what is considered high watchmaking.

Hailed by pundits as ‘Superheroes’ in the world of horology, these trailblazing brands and individuals harnessed the dexterity and technological advancement in artistic watchmaking; giving rise to these spectacular ‘super machines’.

The New Millennium: The Birth of Contemporary Horological Art

The evolution of technology and the courage of a few brave men opened a new chapter in watchmaking at the turn of the new millennium. Timekeepers further evolved from being strictly a time telling device into sculptural and kinetic works of art; or by our definition, horological machines.

Some of the significant breakthroughs as seen in the movement architecture, case, dial, interface and concepts have contributed to this phenomenon and challenged the traditional. The quest for the employment of new materials such as Silicium, touted as one of the significant materials in movement as it requires little or no lubrication, novel alloys like tantalum and magic gold (a scratch-resistant alloy created through the amalgamation of gold and ceramic) have been brought to the fold. The ingenious interplay between a watch movement and its dial as seen in the carousel inspired dial or revolving satellite movement are contemporary interpretations of the manner in which time can be told.

The blend of sophisticated aesthetics, uncompromising craftsmanship, technical innovation and ingenuity only demonstrate the chronometric excellence of these masterpieces; while maintaining accuracy and efficiency over a long period of time – an essential point that should be anchored in any breakthroughs.

These remarkable technological achievements are manifested in the pop-up through the masterpieces on display – every piece an object of beauty and passion that are created from the hands of true artisans.

“Each timepiece is an objet d’art and not just a mere object of telling time. Serving as an educational platform, it seeks to fuel exchange of views and ideas amongst watch aficionados, collectors and watch enthusiasts alike through various activities and plenary discussion,” adds Ms Wong.

Heralding a Platform of Many-Firsts:

There will be an inauguration of 21 inimitable timepieces of which 7 limited-editions are exclusively available through The Hour Glass.
These exclusives editions are Ferrari Big Bang by Hublot, Experiment ZR012 by C3H5N3O9 (an exclusive collaboration between two creative houses – MB&F and Urwerk), Bugatti Super Sport by Parmigiani Fleurier, Freak by Ulysse Nardin, Imperial Fountain by De Bethune, Poison Dart Frog by MB&F and Galet Micro-Rotor by Laurent Ferrier.

Akin to the oscars, The Hour Glass will showcase a selection of masterpieces that had garnered awards at the renowned Grand Prix d’Horologerie de Geneve (GPHG) held in Switzerland from 2006.

A Convergence of Legendary Independent Watchmakers and Artisans

In a world of mass production, it is laudable that true artisans still exist. Legendary independent grand watchmasters are the exemplars of highly skilled craftsmen honoring ancient traditions to produce only limited numbers of exquisite eponymous timepieces where every piece is painstakingly put together. The exhibition showcases some of these claim-to-fame masterpieces by luminaries such as Philippe Dufour, Vianney Halter, Kari Voutilainen, Roger Smith and Laurent Ferrier.
—————————————————————————————————————————————-
Expect a plenary session where these watch masters convene on:

In short, “Super Machines and Horological Heroes” sets the stage for a celebration of watchmaking culture in all its glory – with everything from brand showcases, to panel discussions by watchmaking luminaries, and a unique many -firsts among others.

About The Hour Glass

A specialist luxury watch retailer, The Hour Glass represents a stable of over 50 brands across 27 boutiques in ten cities throughout Asia Pacific. The Hour Glass prides itself as the watch world’s leading cultural retail enterprise, pioneering the development, promotion and appreciation of contemporary horological culture.

Monocle and Wallpaper magazines recognise The Hour Glass as Asia’s premier watch retailer. In 2008, The Hour Glass emerged the winner of the Singapore Prestige Brand Award whilst in 2010, L’Atelier by The Hour Glass – a boutique dedicated to expressing the culture and patrimony of traditional watchmaking garnered the ‘Best Retail Concept of the Year’ accolade by the Singapore Retailers Association as well as the ‘Most Innovative Retail Concept of the Year’ award by the Federation of Asia-Pacific Retail Associations (FAPRA). In the same year, Vanity Fair magazine named The Hour Glass as one of the twelve most influential retailers in the world.

In 2011, The Hour Glass broke new ground with the opening of Malmaison. Spanning over 8,000 sq ft, this multi-category emporium is a sanctuary for objects of authentic luxury housed in an elegant yet eclectic setting. Besides housing the finest of haute horology, a wide spectrum of refined objects d’art, jewellery, fragrances, collectible literature and bespoke services for the sartorially inclined, form the backbone of the exceptional Malmaison experience. Malmaison garnered the 2011 “Best Retail Concept of the Year” award which was accorded by the Singapore Retailers Association, marking the second consecutive win for The Hour Glass in the same category. 2012 marked another milestone for Malmaison by winning the “Best Shopping Experience” award by the Singapore Tourism Board. And 2013 denotes another highlight for Malmaison with the ‘Most Innovative Retail Concept of the Year’ award by the Federation of Asia-Pacific Retail Associations (FAPRA), the second win after L’Atelier.

More Passion by The Hour Glass is the Group’s third multi-brand watch concept boutique that opened in September 2012. More Passion celebrates the rediscovery of traditional craft and the culture of contemporary artisanship, particularly referencing the Nouvelle Vague design movement.

Upping the ante in the luxury retail scene in 2013, The Hour Glass introduces the globally renowned Ladurée brand of macarons in Singapore. This collaboration extends the role of The Hour Glass as the leading purveyor of luxury products and also marks Ladurée’s foray into the South East Asia market.