The Statement Of Horological Position Mid-2020: Lockdown Lows And China Saves The Show

I think it’s fair to start this article by saying that 2020 turned out to be the year none of us was prepared for. The year began with a few passing news reports of a new virus being detected in China, but generally, all was rosy, and we were set for another year of fun. It feels like that was years ago now. Most of the world has been under some form of lockdown since March. Businesses have been closed, people staying at home safely and an army of healthcare, retail and distribution workers have been fighting to keep some form of normality going in the background. 2020 was not our year, and it certainly wasn’t the year for the Swiss watch industry, either. So, let’s take a closer look at how the Swiss watch industry performed. In the same way that a company has to provide a statement of financial position (or a balance sheet), WristReview provides for you its Statement of Horological Position. 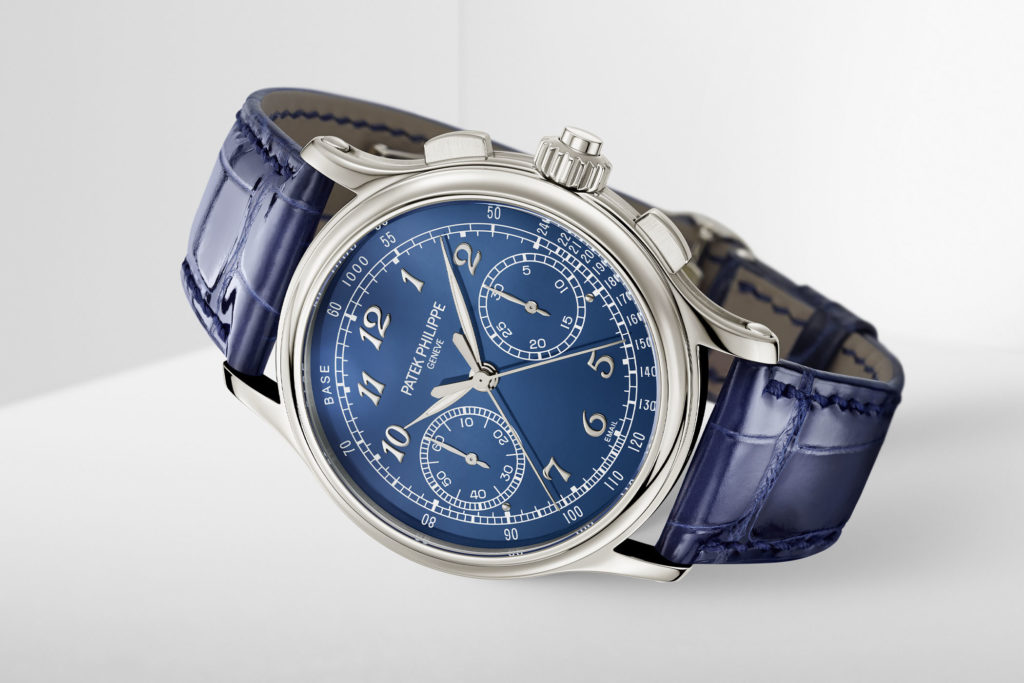 The first thing to remember about this year is that we’ll be seeing some significant drops in statistics. Several of the top players including Rolex and Patek Philippe closed their factories and halted production altogether following advice from the Swiss government. 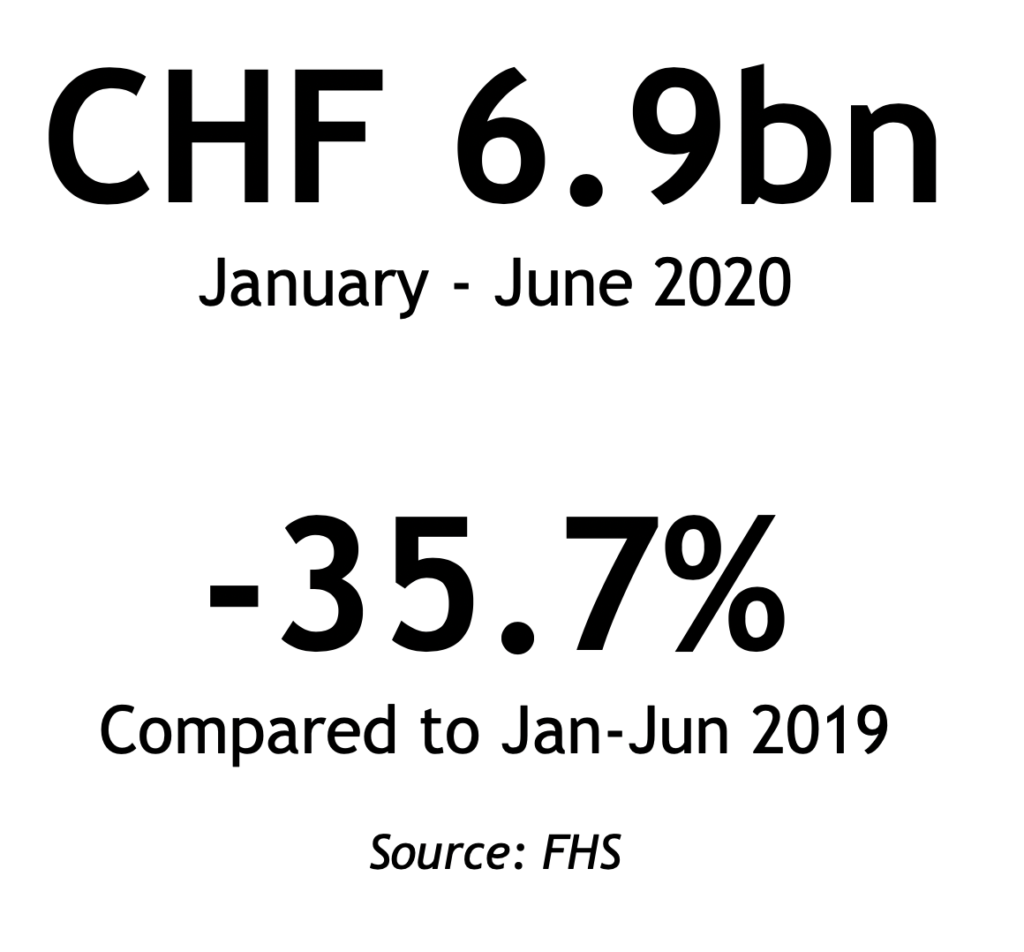 A total of 2.1 million mechanical wristwatches were exported in this period along with 3.4 million electronic watches. Compared to last year’s figures, this is a drop of 44.9%. The FHS figures do not differentiate the ‘electronic watches’ category into quartz timepieces and Swiss-made smartwatches such as TAG Heuer’s Connected model. 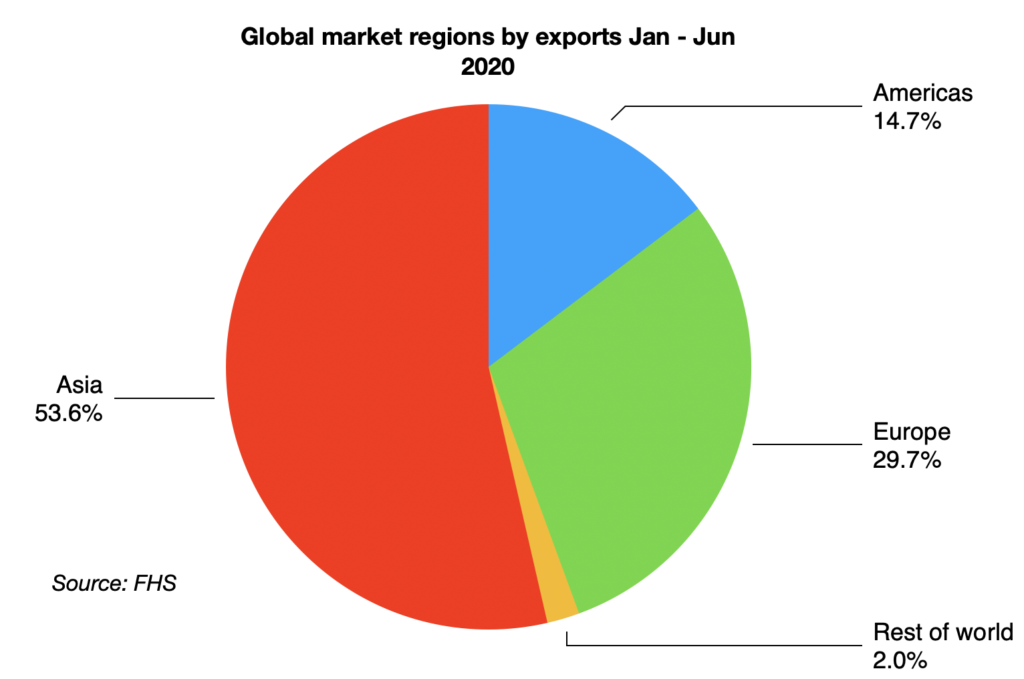 In terms of exports by geographic regions, very little changed between January-June of 2020 and the same period in 2019. Asia still has the largest market share by continent, followed by Europe and the Americas. The ‘Rest of World’ category comprises Africa and Oceana, which have market shares totalling 0.7% and 1.3% respectively. 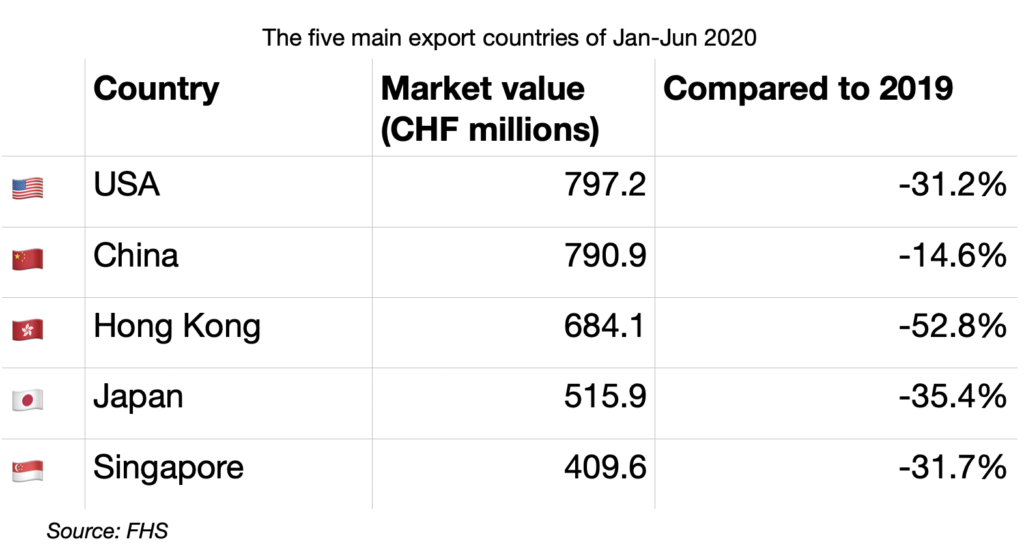 In the first half of the year, all of the five largest export nations saw a decrease in exports overall, with China having the smallest percentage decrease and Hong Kong the largest. According to the FHS figures, Hong Kong is now the third-largest export market, having dropped from being the largest in the same period last year. The USA is still ahead of China, Japan held on to its position as the fourth largest export market, and Singapore overtook the United Kingdom by 22.6 million Swiss Francs. 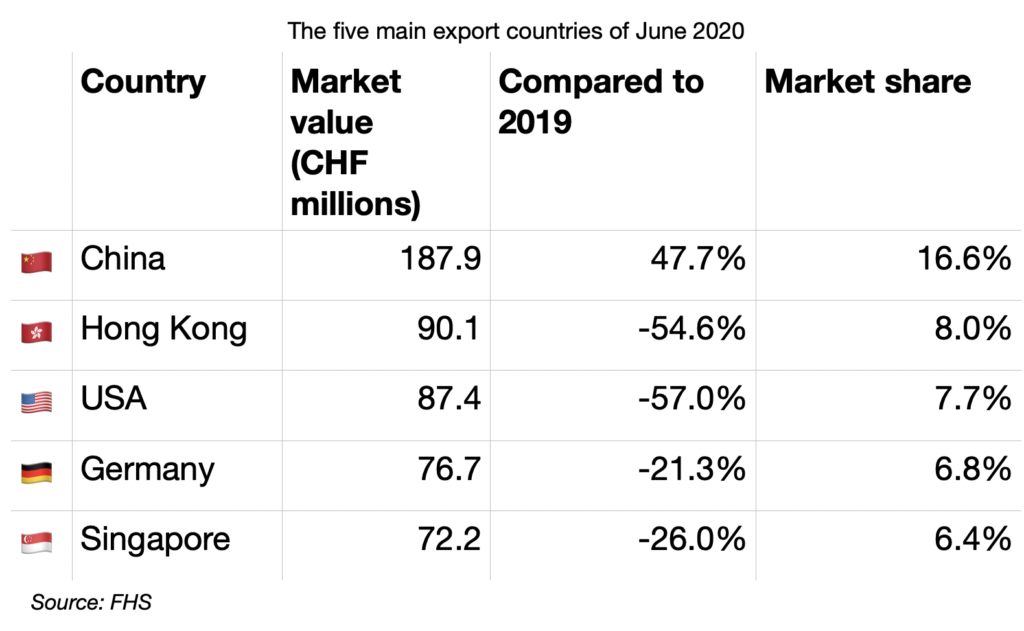 June 2020 saw a different order for the top 5 most significant export markets, with China being the only nation to see an increase in comparison to June 2019’s figures. Germany also replaced Japan in the fourth position and overall had the lowest decline in exports of the nations. 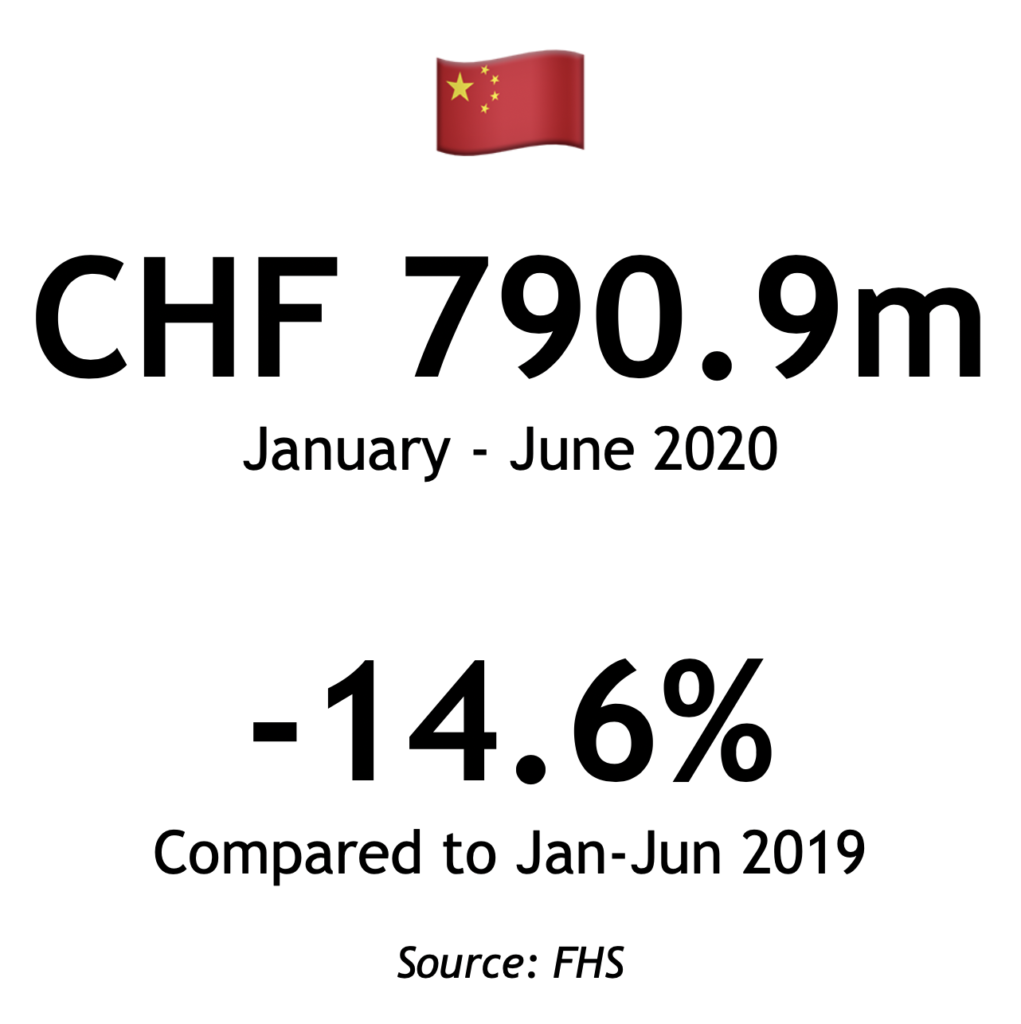 I think the main factor involved in the decline of exports over the past six months should be clear to anyone who’s not been living under a rock for the past year. In June, China was the only country of the top 5 nations to post an increase in exports, an increase of nearly 50%. The FHS explains that this could well be because of China’s recovery from the Covid-19 outbreak, meaning they were just able to squeeze in a growth while every other nation posted a loss.

Covid-19 is the most severe threat to human life at the moment. As such, all around the world governments have been advising (and forcing) people to stay in their homes. The last time people were told to stay at home on such a colossal scale in the UK, the sky was filled with German bombers.

Switzerland was one of the first nations to respond with force if I recall correctly. Early on into the European outbreak, Switzerland banned all large scale gatherings, which put SIHH and Baselworld out of action. To further demonstrate to the world just how serious the threat was (and how serious the Swiss are about tackling it), multiple watch manufacturers closed their doors for a month or more.

Nearly all the major Swiss brands closed their doors for at least a month. Rolex, Tudor, Breitling, Zenith and Patek Philippe all announced they would be closing their doors. Surprisingly, the Swatch Group never officially closed its factories, but it did limit the amount of staff on the premises at any time, which limited production. This will have resulted in a monumental backlog of work that needs to be done, and anyone currently on a waiting list will have had their delivery time pushed back by at least a couple months while the manufacturers get themselves organised in a way that allows them to work and be socially distanced as well. Generally, watchmakers themselves aren’t too cramped together, at least for the bigger brands who can afford more space, so we’ll see what this means for those when things get fully back to normal.

When it came to model releases, we saw nearly the entirety of the industry take to online advertising to show off the new 2020 pieces. Almost every brand used the internet as a replacement for trade shows, except for Rolex and Tudor which decided to delay their releases until 2021. That was until they changed their minds and decided they would, after all, release their new pieces on the first of September.

I, for one hope that this scenario has pushed onto manufacturers just how much they need to co-operate with large-scale watch press such as WristReview. We’re a unique part of the watch industry that is trusted by the audience and potential buyers to formulate opinions, but we also give constructive feedback that is very useful to watch manufacturers. We also spread the word about new timepieces, so it’s in their interest to work with us.

I didn’t want to spend too long on this topic, but as this is one of the somewhat rare times where I as an author can speak solely for myself, I wanted to say that I was incredibly disappointed in the way the MCH Group dealt with the issues surrounding Baselworld earlier this year.

If you’re not familiar with what happened, when it became evident that Covid-19 was going to have a significant impact on the Swiss watch industry, the showrunners at Baselworld decided to move this year’s show to January of 2021. This wouldn’t have had much of an effect had Baselworld not already agreed to co-ordinate its dates with Watches & Wonders Geneva show (formerly SIHH). Watches & Wonders would run in Geneva under the new banner, and then Baselworld would open the day after Watches & Wonders finished so that it was a lot less hassle to get everyone to Switzerland for the big reveals.

However, where Watches & Wonders decided to cancel their show for 2020 altogether, Baselworld chose to postpone until January of 2021. This meant that all the exhibitors both big and small (Baselworld plays host to a wide array of boutique watchmakers and jewellery brands) had their deadlines for press-releases, staffing, costing and all manner of things brought forward by three months. When we visited Chopard back in 2017, we toured their factories the week before Baselworld, and it was chaos, very professional chaos, but chaotic nonetheless. To get everything ready for the show, get the staff together, get the funding sorted and then head over to Basel and get the booths designed and built (the brands assemble and deconstruct their display stands every year, rather than leaving them up) is a massive job that simply wasn’t going to be done in time for January.

Then there are the costs of Baselworld. There, the MCH group gave the exhibitors two options: either put nearly all their funds for this year into the 2021 show with the rest going to MCH, or receive a small refund with fewer funds going to next year’s show. When confronted by several brands who were, at this point, rather upset, the MCH Group said that it legally didn’t have to refund them at all. A terrible move indeed.

As a response, all the significant exhibitors that remained (Rolex, Tudor, Patek Philippe, Chopard & Chanel) turned their back on the MCH Group and decided to form their own show. This departure was soon followed by the remaining brands from the LVMH Group (Bulgari had already stated it wasn’t returning). A slew of panicked emails from the organisers at Baselworld seemed to be attempting to reinforce with us that all is well, despite everyone leaving. The last we heard from them, the organisers of Baselworld indicated they had somewhat arranged a plan with the brands that were going, but their email came across as if they felt they were in the right all along. I can guarantee you that, while legally they were correct, they handled the situation so poorly I’m amazed it happened at all, especially considering the amount of financial losses Baselworld has suffered recently.

In the same way that I feel the Swiss watch brands should respect us as valuable gears in the engine that is the Swiss watch industry, I also think that big corporate shows should not abuse their position and make wild claims about how useful they are. They are only there because the brands fund them, and that is the end of it.