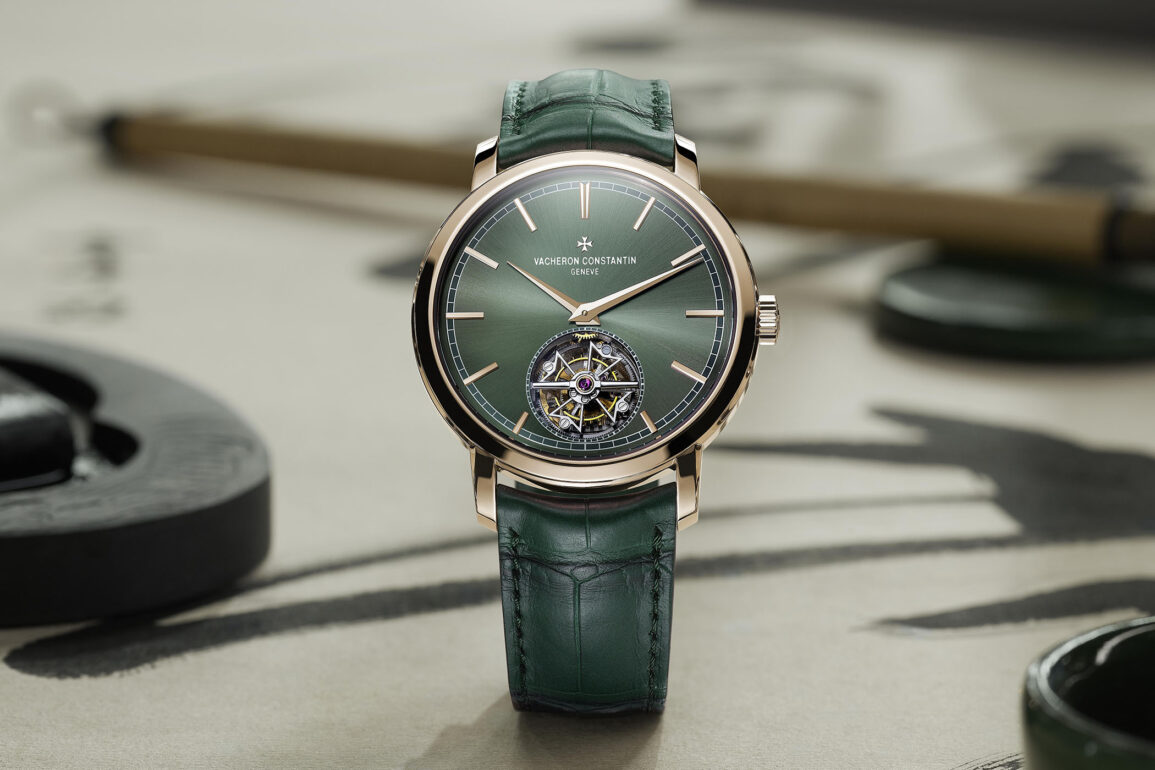 A high complication watch exclusively for the Chinese market. 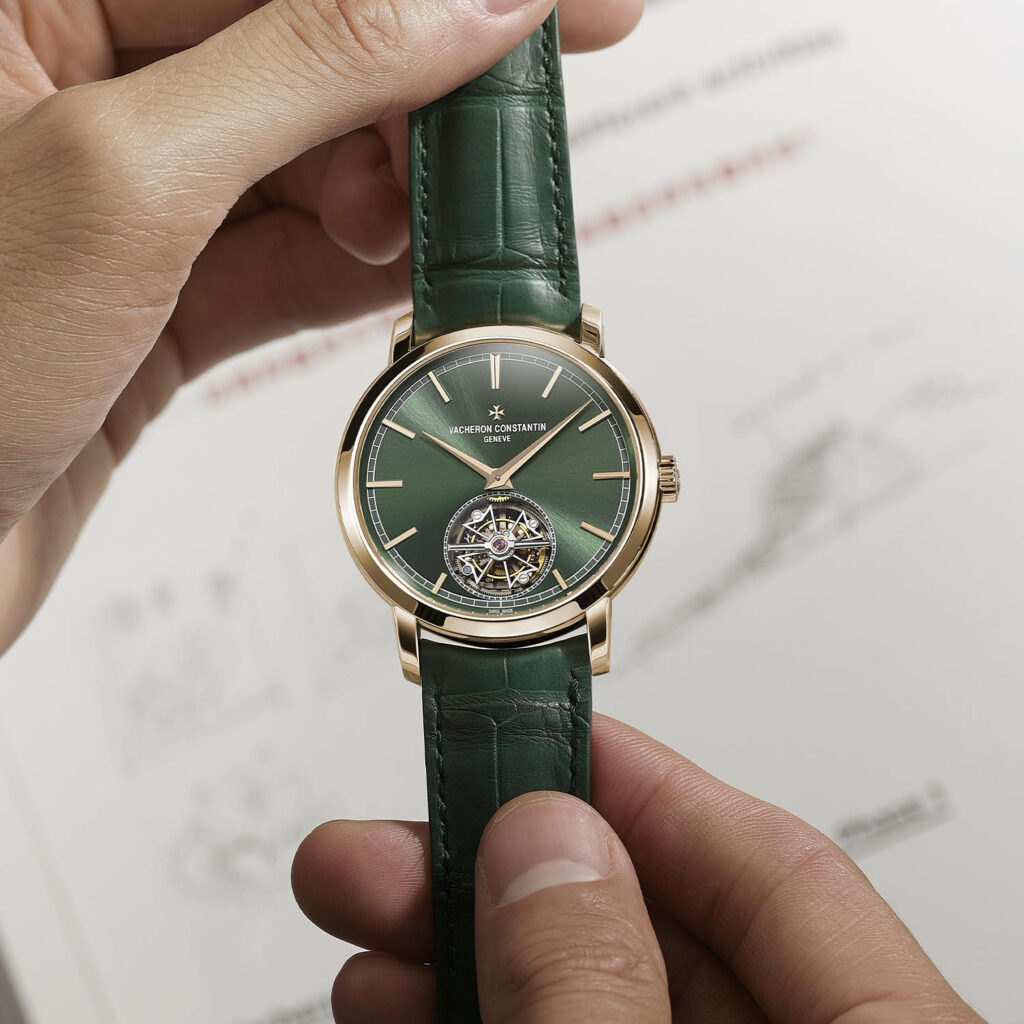 It’s pertinent to mention the old Chinese saying “A Gentleman of Jade”; which describes the most important characteristics of a gentleman, a person with elegance, dignity and a noble and virtuous character. Considering the color of the dial… which is jade, it’s not hard to determine that the same characteristic is echoed onto the watch in the form of jade color. Since ancient times, the Chinese believe that a true gentleman is noble and dignified, which is the inspiration behind the jade color of Traditionnelle Tourbillon. The gemstone jade has been a treasure of Chinese tradition since ancient times, it’s a symbol of morality throughout Chinese history. Even the green color has poetic value in Chinese literature and poetry, it’s described as gentle, soothing, and full of vigor and energy. The quality and preciousness of jade is determined by the purity of its color. The shade of green that this first high complication Traditionnelle Tourbillon China Limited Edition by Vacheron Constantin is dressed in, is known as the “Imperial Green” color and it’s considered the purest and most sophisticated shade of jade, the “jadeite” as it’s called. 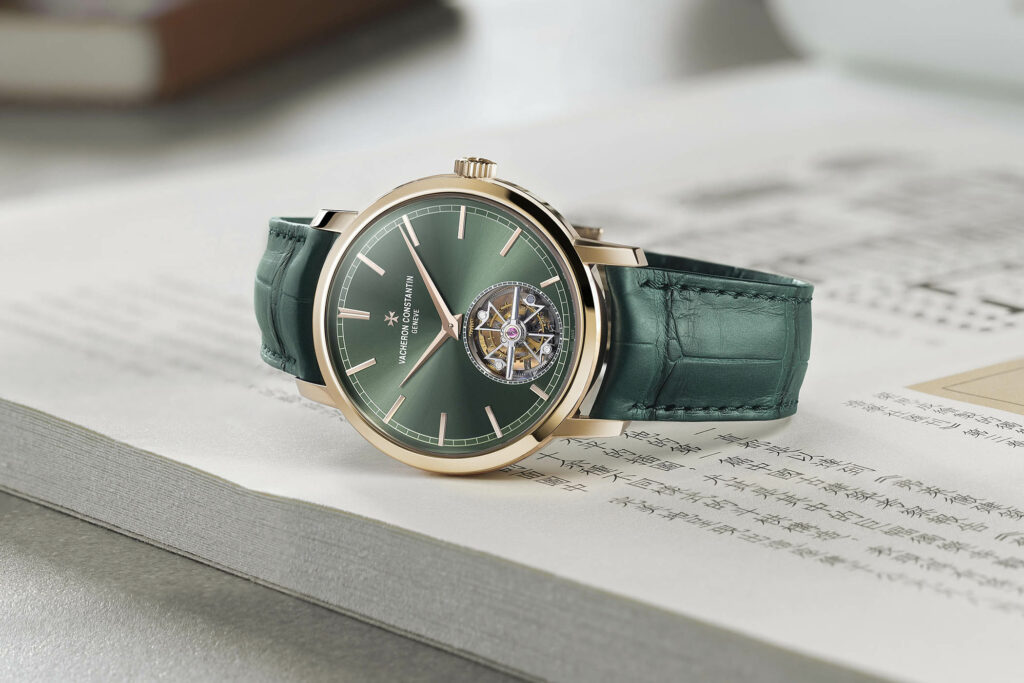 The dial is where the watch shows its true colors, Imperial green that is. Along with the sunburst finish of the dial, the Imperial green color creates a visually stunning effect when light shines on the dial. The dial harbors applied markers and dauphine hands, a railroad minutes track runs along the periphery of the dial. There’s a large opening at 6 o’clock which serves to exhibit the one-minute tourbillon, which itself resides under the bercé-polished bridge. 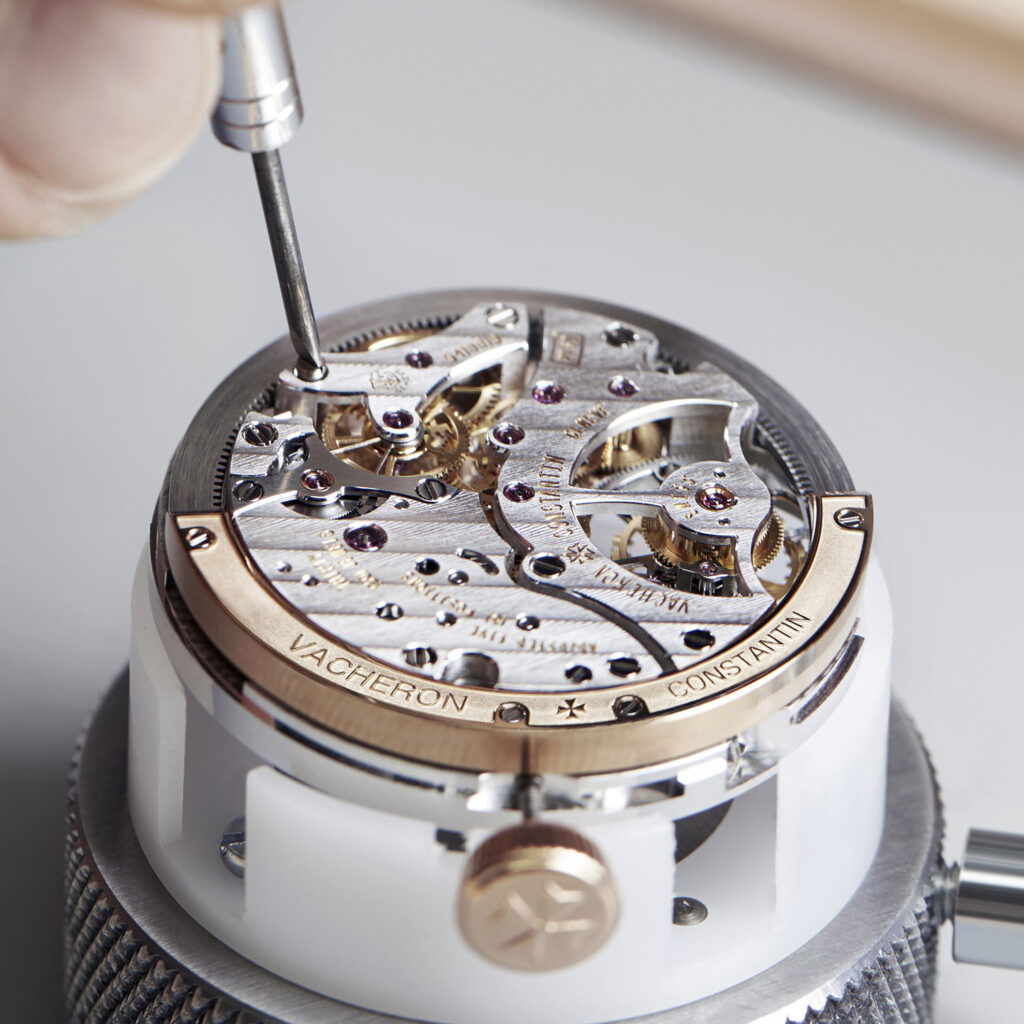 The encased movement used in this watch is the in-house calibre 2160, which is a self-winding movement. It beats at the rate of 2.5Hz, before you exclaim “it’s low!”, allowing me to deliver the good news that the power reserve is a handy 80 hours. You see, a high beat rate provides more accuracy, at the cost of a lower power reserve. As they say, you win some and you lose some. Another noteworthy thing is that this is a Geneva-certified calibre, housing an anti-gravity organ which is indeed cool. At just 5.65 mm, the movement is quite thin. They achieved this level of thinness by using a peripheral rotor as opposed to the oscillating weight. The peripheral rotor rotates around the movement’s periphery. This approach results in a thin movement. The beautiful hand finishing of the movement can be observed and admired thanks to this peripheral rotor. 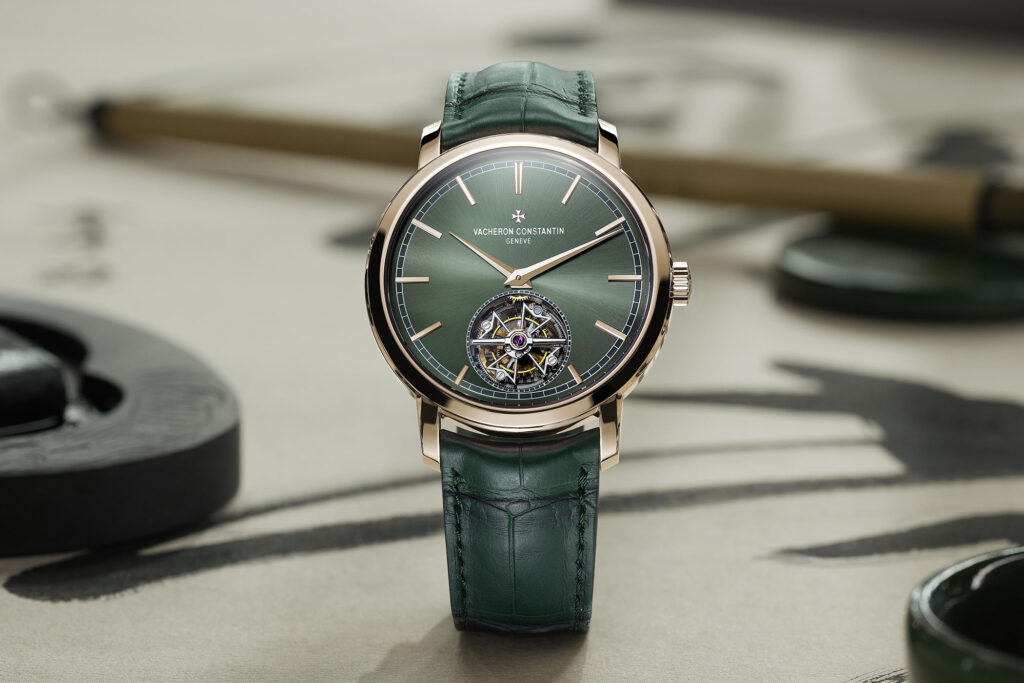 Enclosing the movement is the elegant and polished 41 mm 18k pink gold case. With straight and angular flanks and a notched case back ring, the case retains all the attributes of the Traditionnelle collection it belongs to. Flip the watch over and sapphire crystal has its presence there as well. The watch is water-resistant to 30 m. Attached with the case is the green color alligator strap with an 18k 5N pink gold folding clasp. 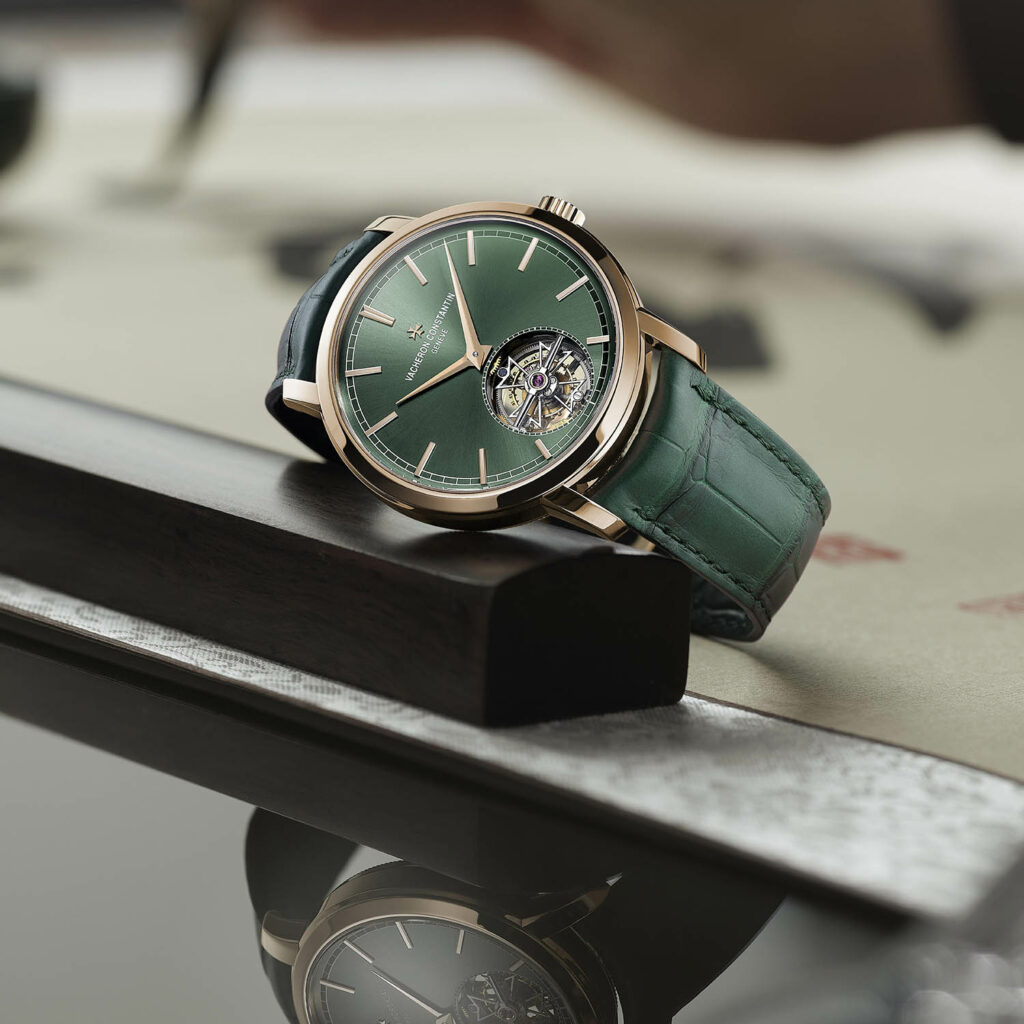 The Vacheron Constantin Traditionnelle Tourbillon China Limited Edition watch is issued in limited 30 numbered pieces exclusively for mainland China. Vacheron Constantin didn’t confirm the price of the watch yet, but it’s expected to be somewhere around EUR 150,000.