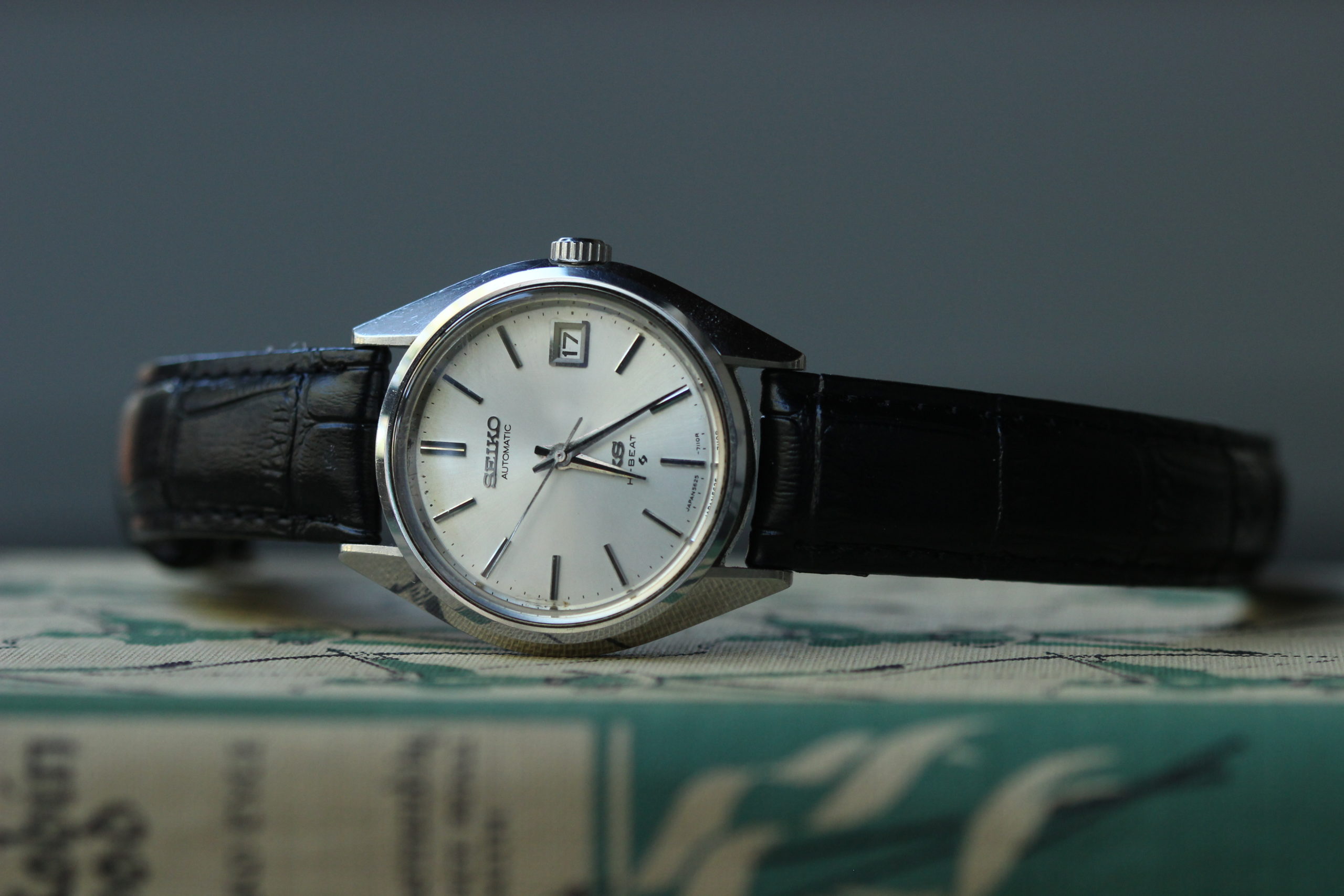 You definitely have heard of Seiko and Grand Seiko, but did you know there was another high-end Seiko that rivaled the GS range in the 1960s and 1970s? This was King Seiko and today, I’ll be giving you a breakdown of my personal King Seiko Ref. 5625-7111. 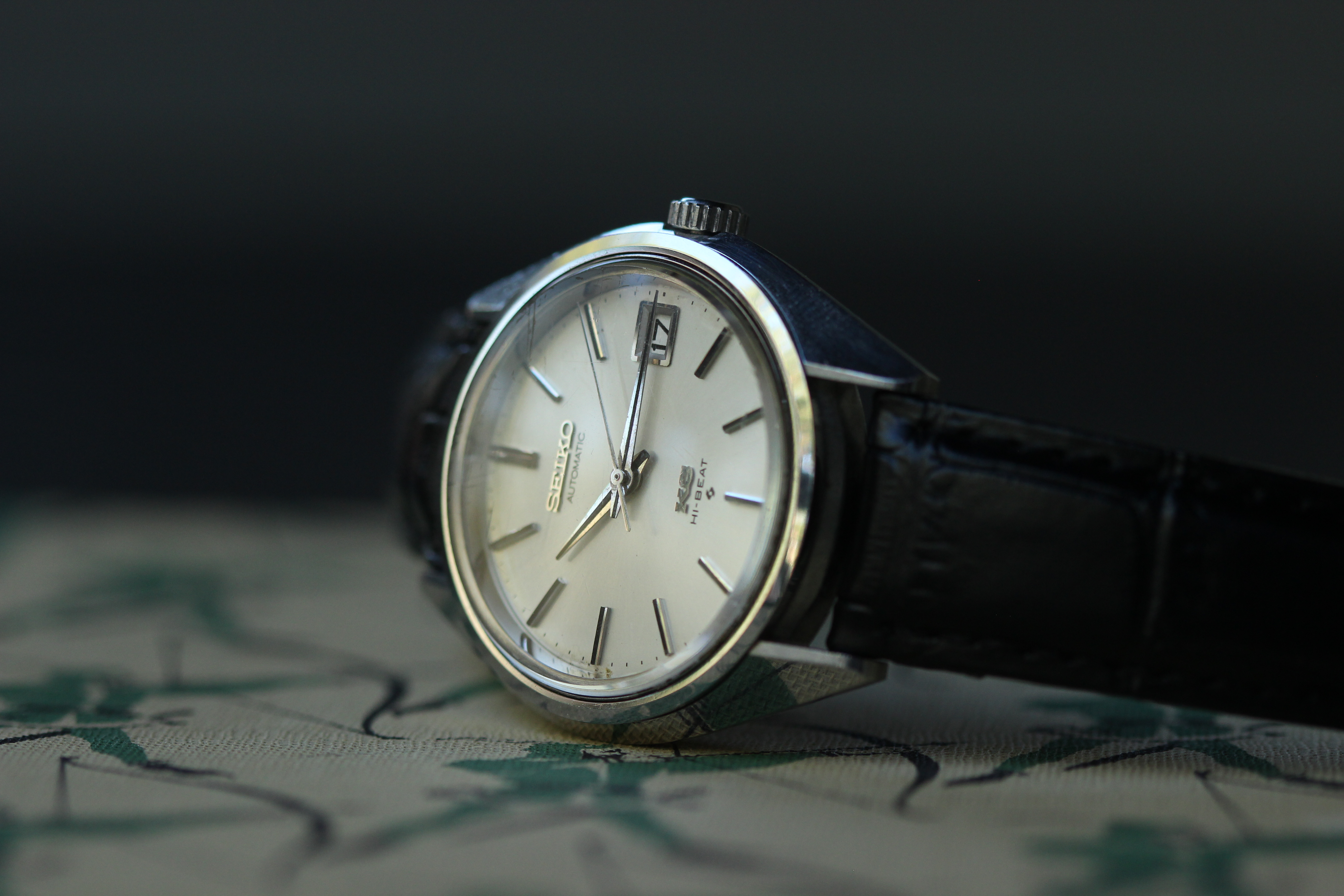 First, a bit of history. Seiko was founded by Kintaro Hattori in 1881 as an importer of foreign clocks and watches and by 1924, the Seiko brand of timepieces began production in the city of Suwa. By 1959, two factories were making Seiko timepieces, the original Suwa factory and the Daini (Daini means second in English) factory, and by the 1960s, these factories were competing against each other to produce the best Seiko possible. Suwa Seiko released the first Grand Seiko in 1960 and Daini Seiko released their watch, the King Seiko, in 1963. 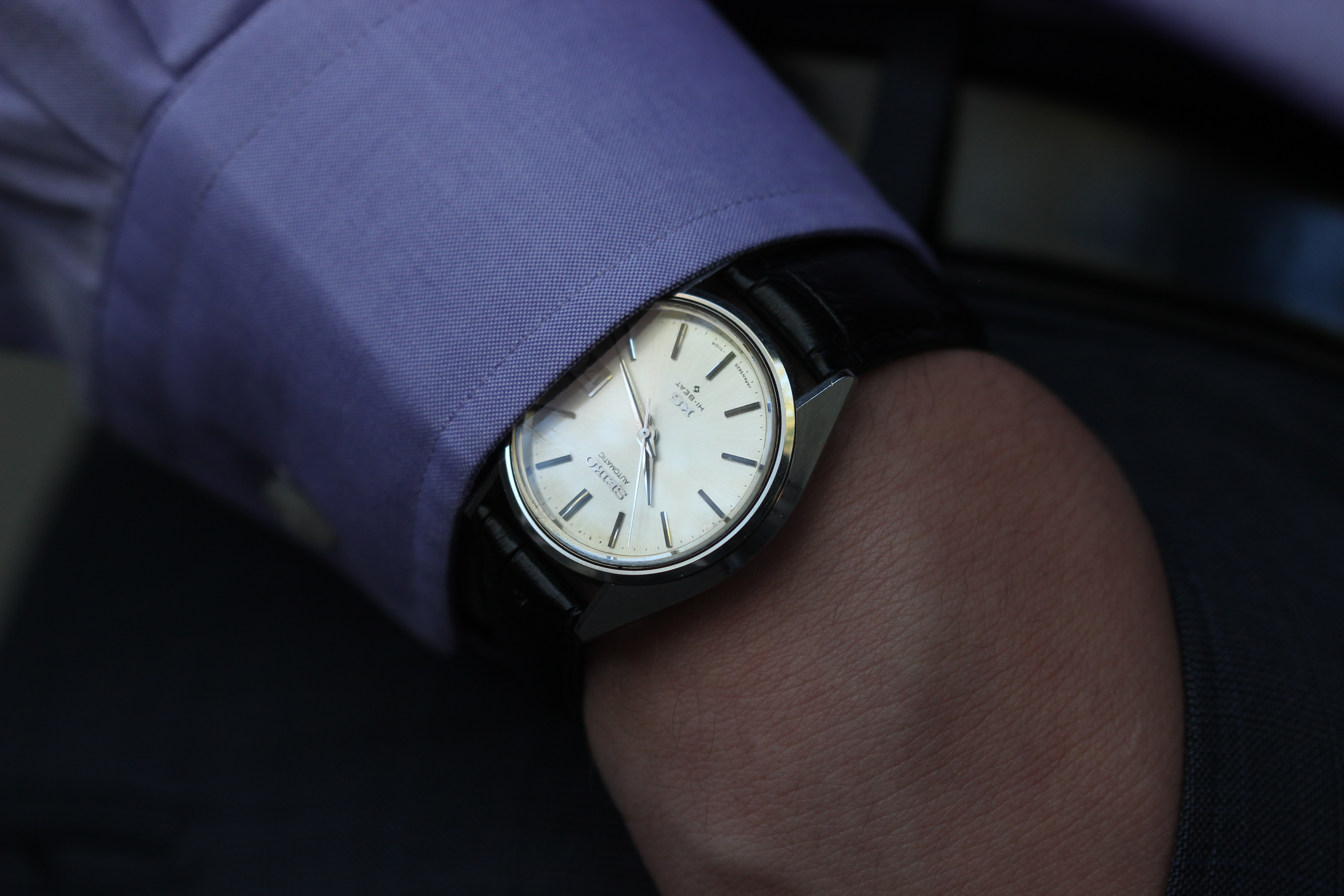 These two watches look nothing like their successors because soon after their release, Seiko’s head designer Taro Tanaka laid down his ‘Grammar of Design’ rules for all watches made at Seiko. His rules were simple but effective, much like the watches that were designed according to them. Over the years, the rules were bent but they were never broken and many modern Grand Seikos still adhere to them even 50 years later. 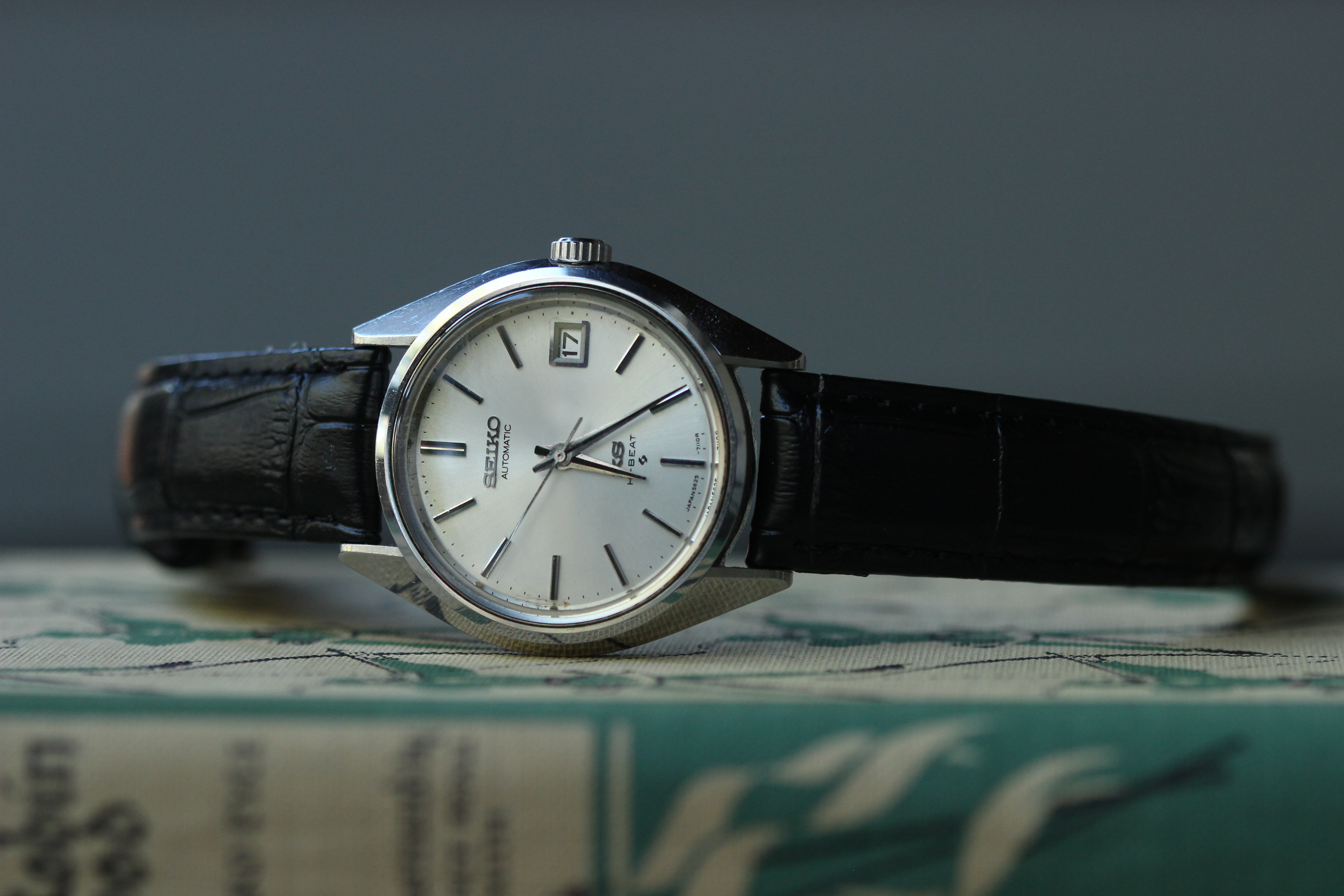 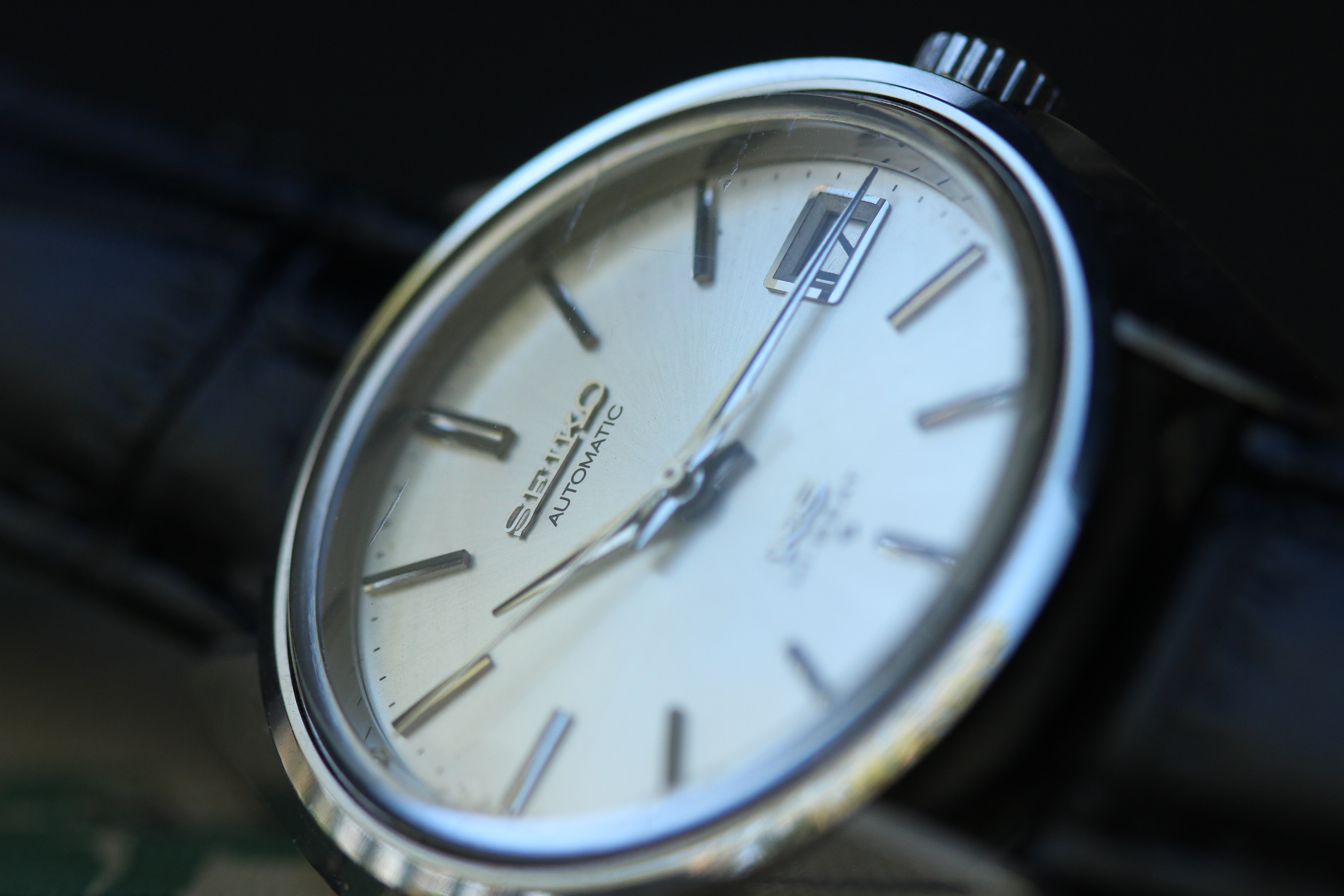 My watch, the Reference 5625-7111 was produced towards the very end of the life-span of the King Seiko in the mid-1970s, but it still has all the hallmarks of Tanaka’s design rules put in place from 1962. The long, angular lugs, the mirrored internal facing facets and the dauphine hands have all withstood the test of time and look as distinguished today as they did 45 years ago. There is a lot of watches from the 1970s that are very timeful (as in they are so 1970s that you just have to adore how dated they look) but others, like my King Seiko, are very timeless and will continue hopefully continue to look this good for many years to come. 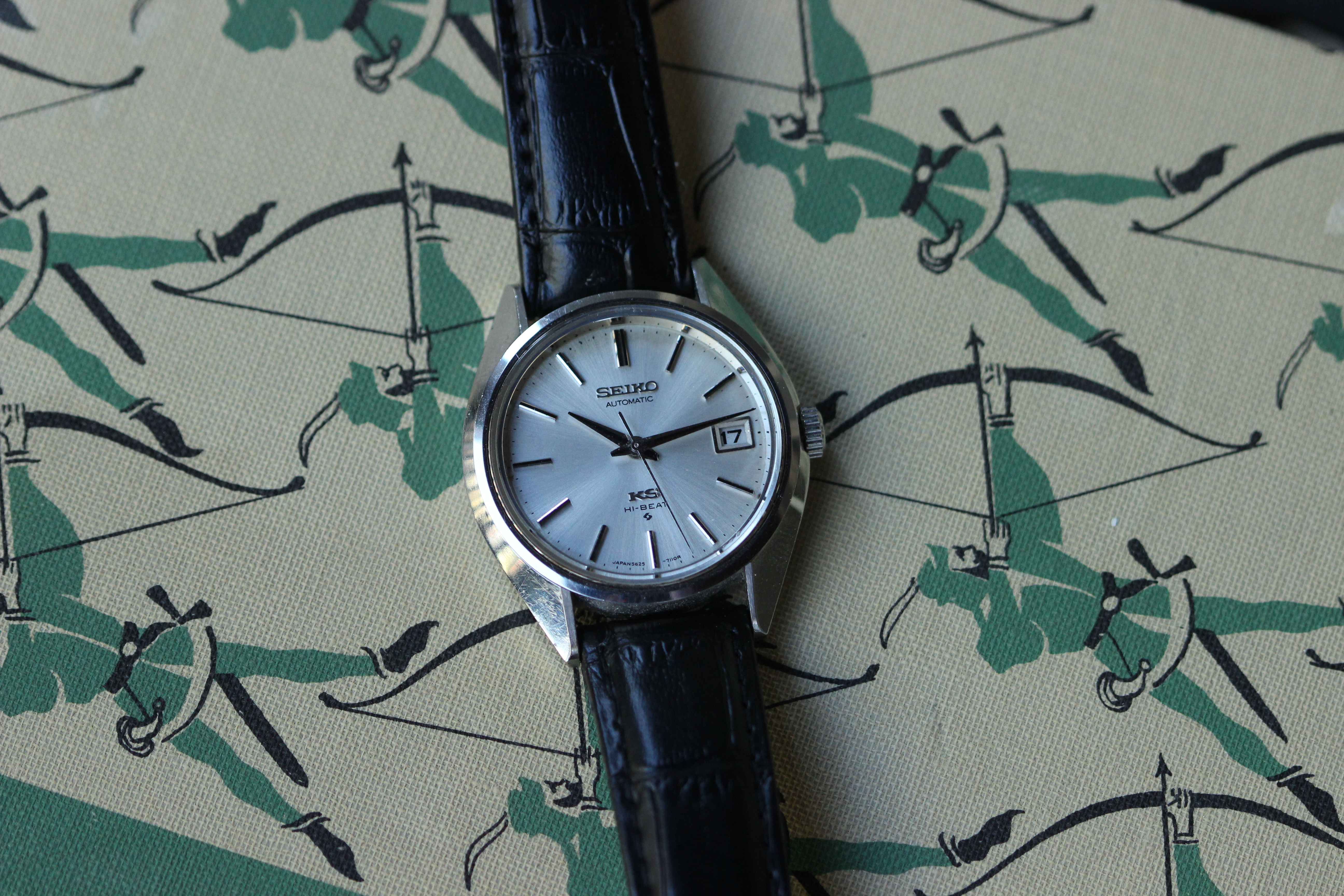 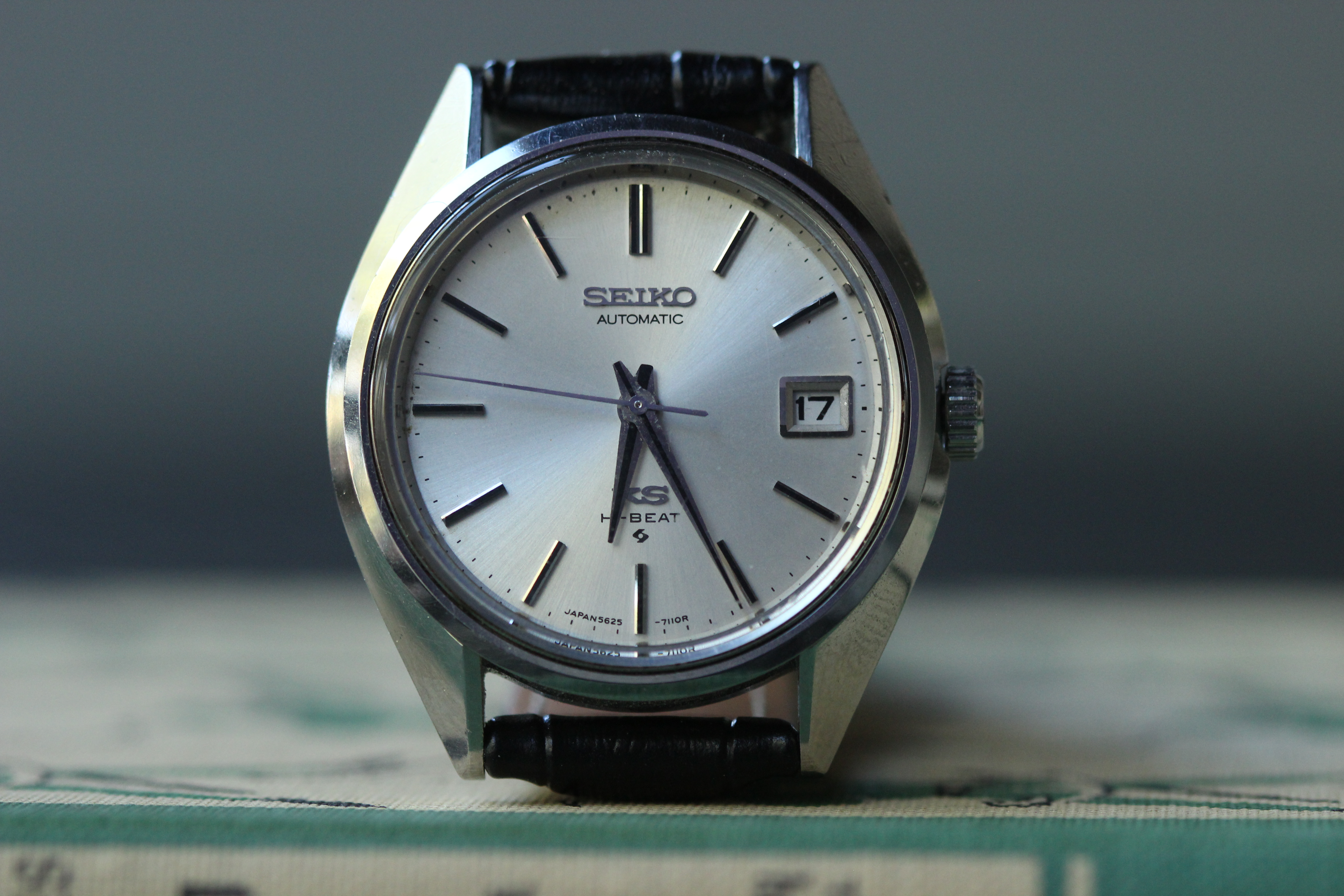 All writers should know that it is in the editing process that a story finds it’s true voice. After every superfluous has been taken away, only the essentials are left and this is how I feel about the dial on my watch. All that is left is are eleven highly polished hour markers, one date window and three hands. My watch has some slight discoloration at 12 o’clock but it’s barely noticeable and frankly a lot better than many other King Seikos I’ve seen. Having an original albeit imperfect dial, along with minimal case polishing, was very important to me when seeking out this watch as the internal facets and hard angles give this watch so much character. At 36mm, my King Seiko is what many consider to be the perfect size vintage watch, and I happen to agree. The long, angular lugs makes the watch wear a little larger than the measurements suggest, but rather than dominate the wrist, it frames the watch perfectly. 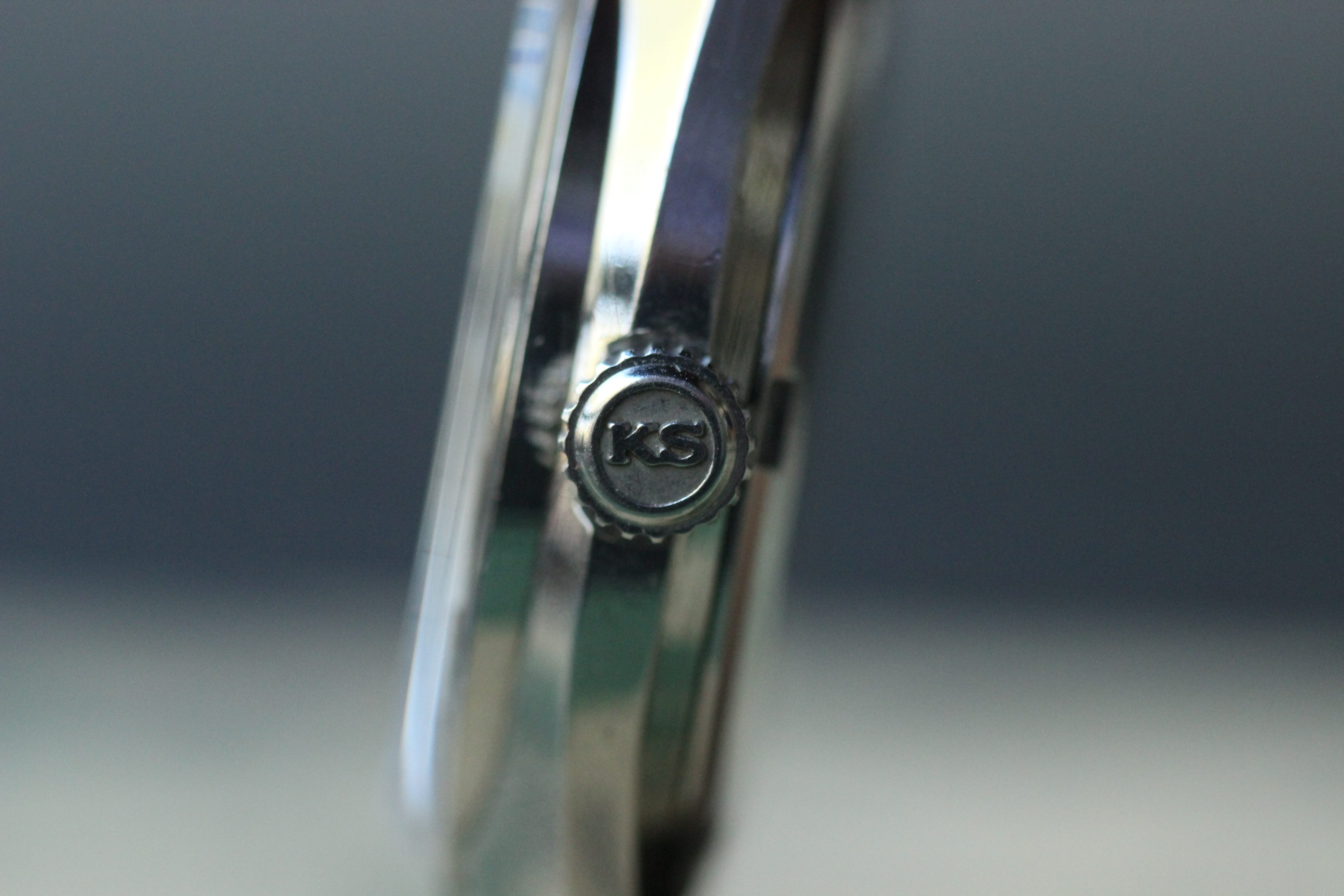 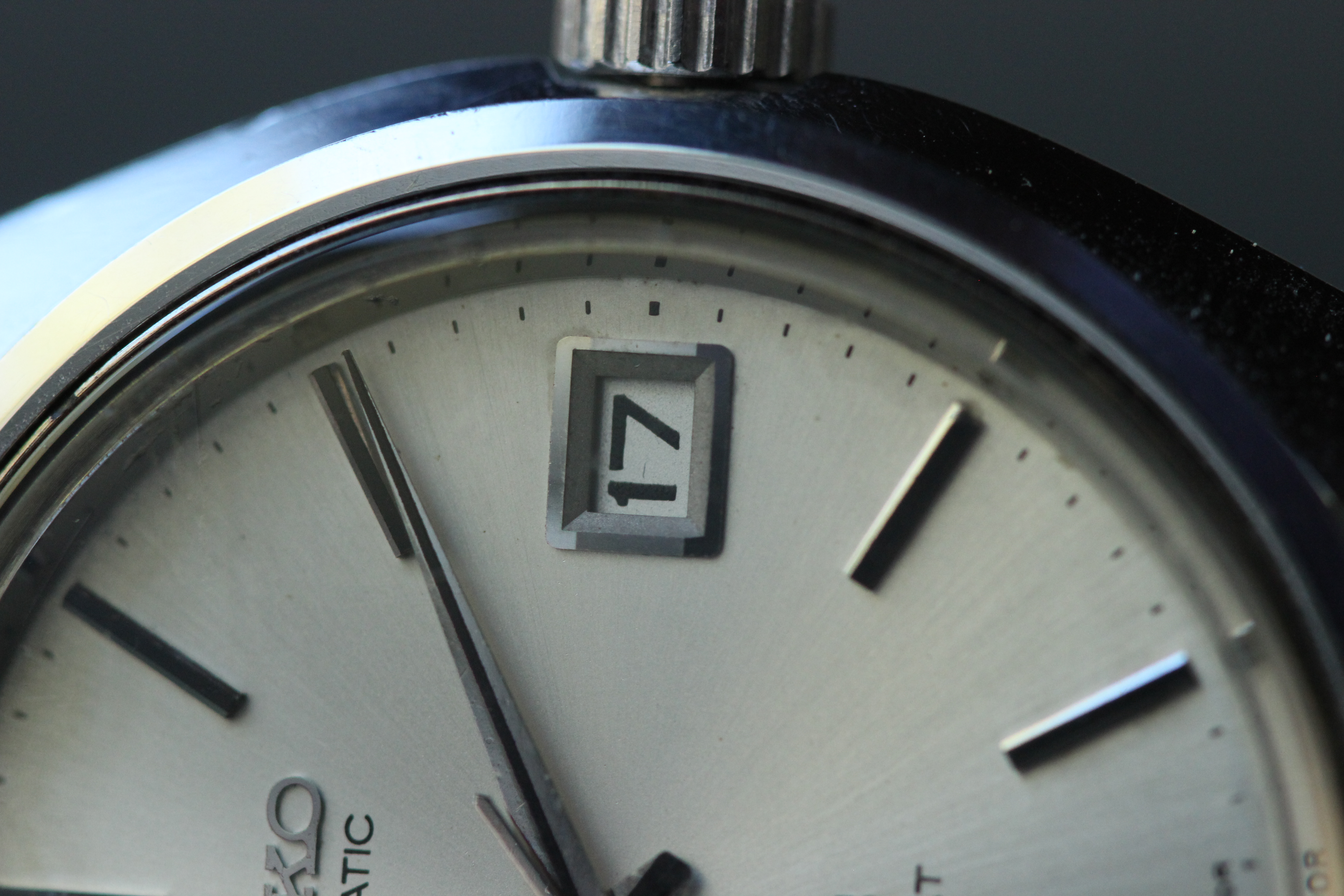 Inside my watch is the automatic Seiko caliber Caliber 5625, a 25 jewel, high beat movement beating at 28,800bph. By today’s standards, as well as a number of vintage Grand Seiko, 28,800bph isn’t high beat but for the time, it was a staggering achievement in watchmaking. I must admit, I haven’t taken my watch in ‘to the spa’ yet but even with its unknown service history, it still achieves a pretty respectable accuracy when I wear it daily. The quick set date still works perfectly after all this time and the crown has little to no ‘wobble’. 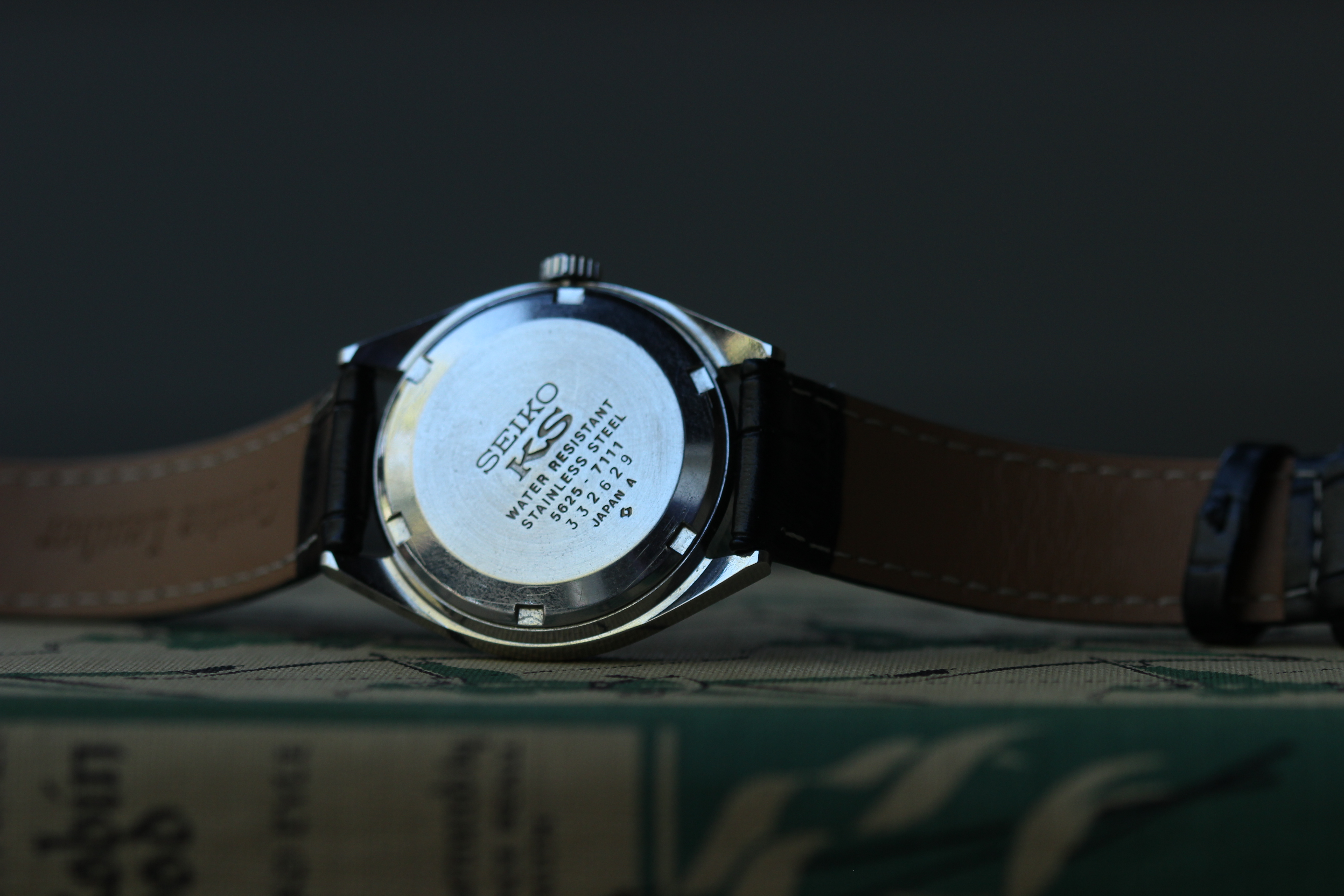 At the moment, there are only two things I’d like to upgrade about the watch, namely the buckle and the strap. There were King Seikos from the time that were sold on a stainless steel bracelet but these seem to be limited to the Japanese domestic market and are extremely difficult to find nowadays. What is more feasible is finding a more period correct strap and buckle. Right now the watch is fitted on a blank buckle on a fairly unassuming black calf strap with an alligator. Judging from period catalogs and advertisements, it seems that the King Seiko was originally sold on a kind of lizard grain strap, but I also think that an alligator strap with a small scale pattern would work as well. Finding a King Seiko buckle shouldn’t be too hard, but convincing myself that I should pay $150 for a branded piece of old metal might be. 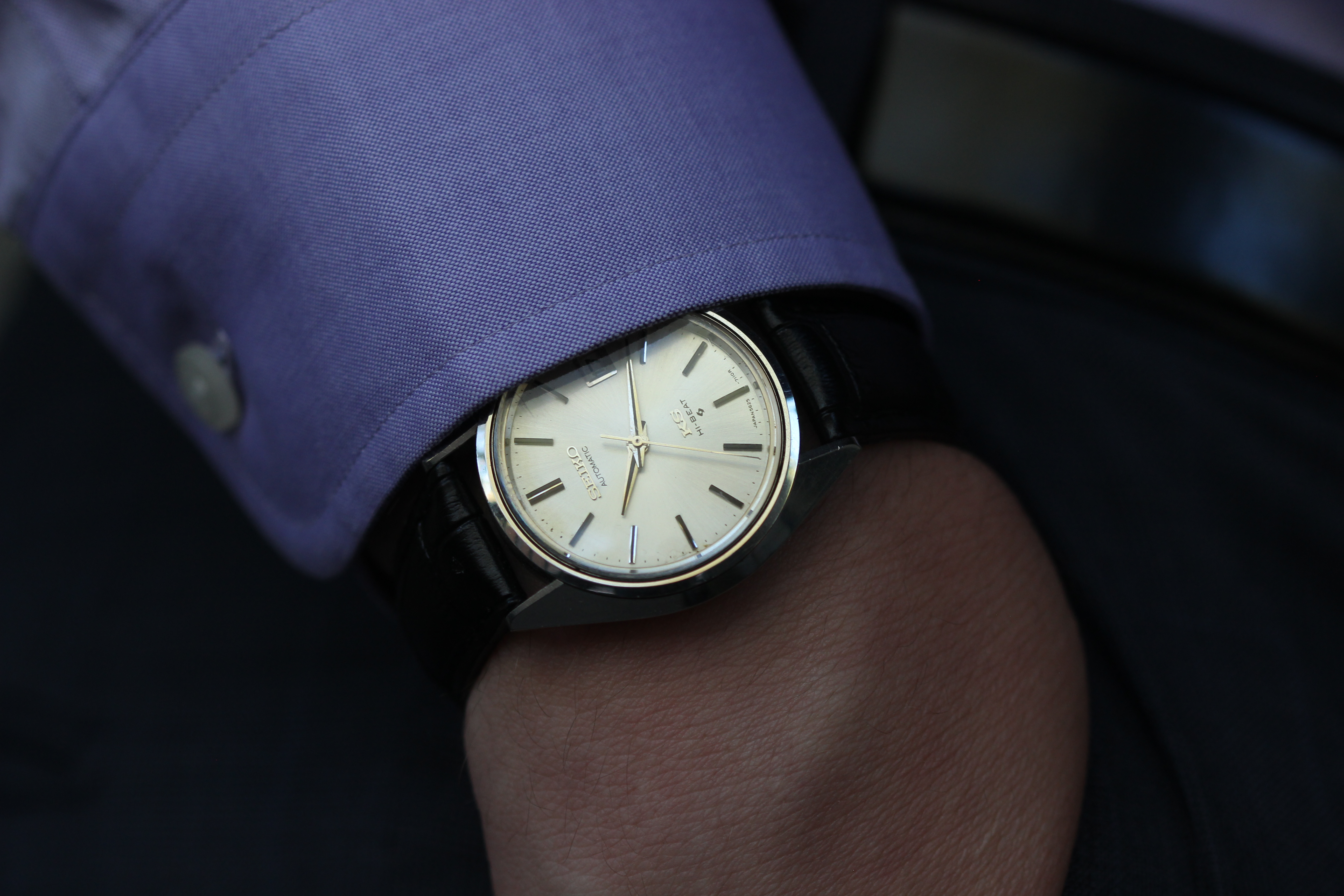 I’ve only had my watch for around 2 months now, but if you couldn’t already tell, I absolutely adore it. If you’re looking for a vintage watch that has equal amounts of style and horological chops, then the King Seiko Ref. 5625-7111 is a great pick.