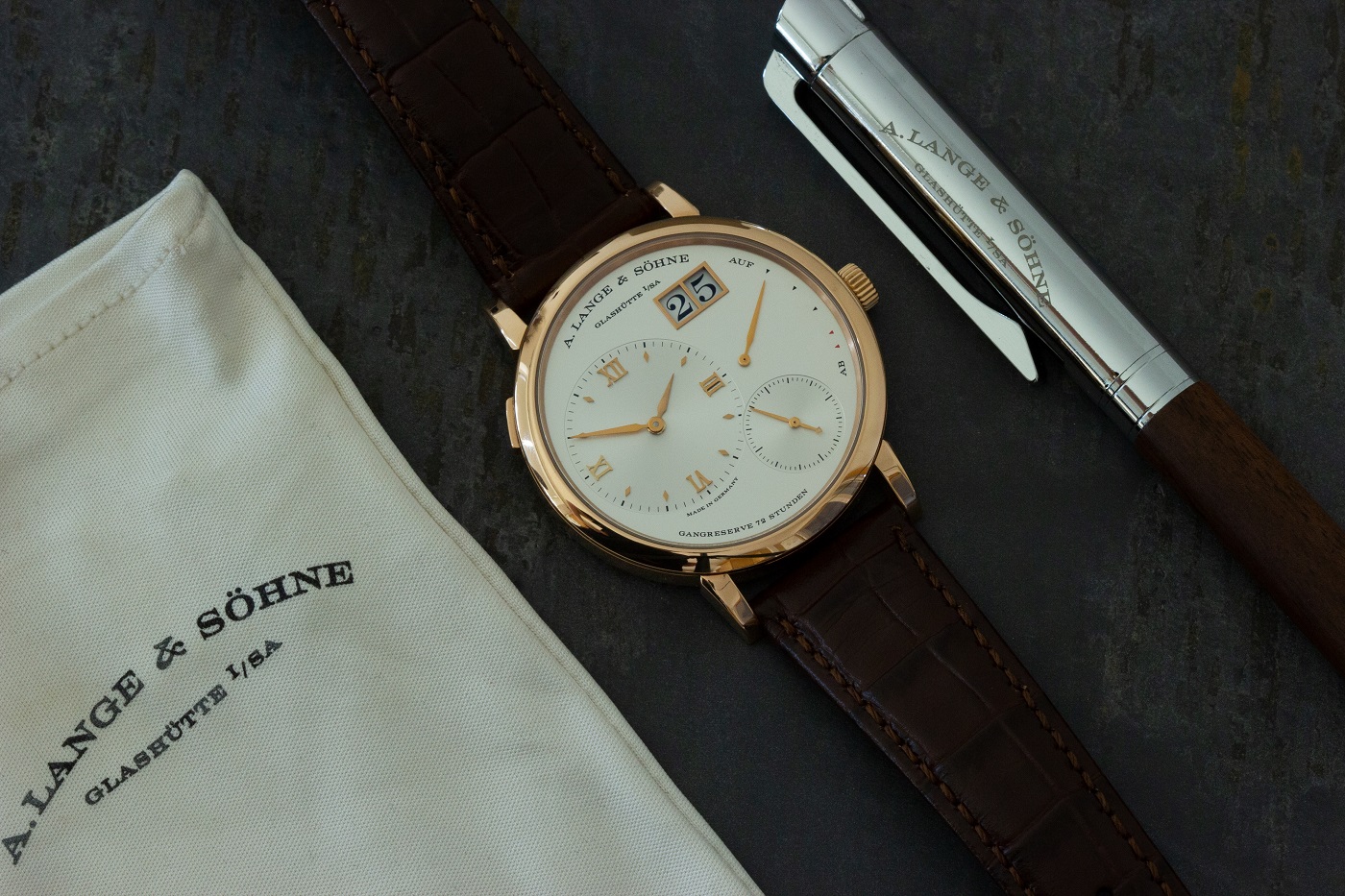 A Fortnight Review: Two Weeks On The Wrist With The A. Lange & Söhne Grand Lange 1 Watch

Not too long ago I got the chance to go one to one with a watch that is undoubtedly a grail piece for most watchaholics, the Lange 1’s bigger, younger brother, the Grand Lange 1. This watch is slightly larger than the original Lange 1, as the name suggests, the case being a precise 40.9mm in diameter instead of 38.5mm. It’s also slightly thinner, too, with the case reaching 9mm on the Grand Lange 1 and 9.8mm on the Lange 1. The difference most likely stems from the larger diameter meaning more space to use for different components, but we’ll get into that a bit more when we come to the movement. 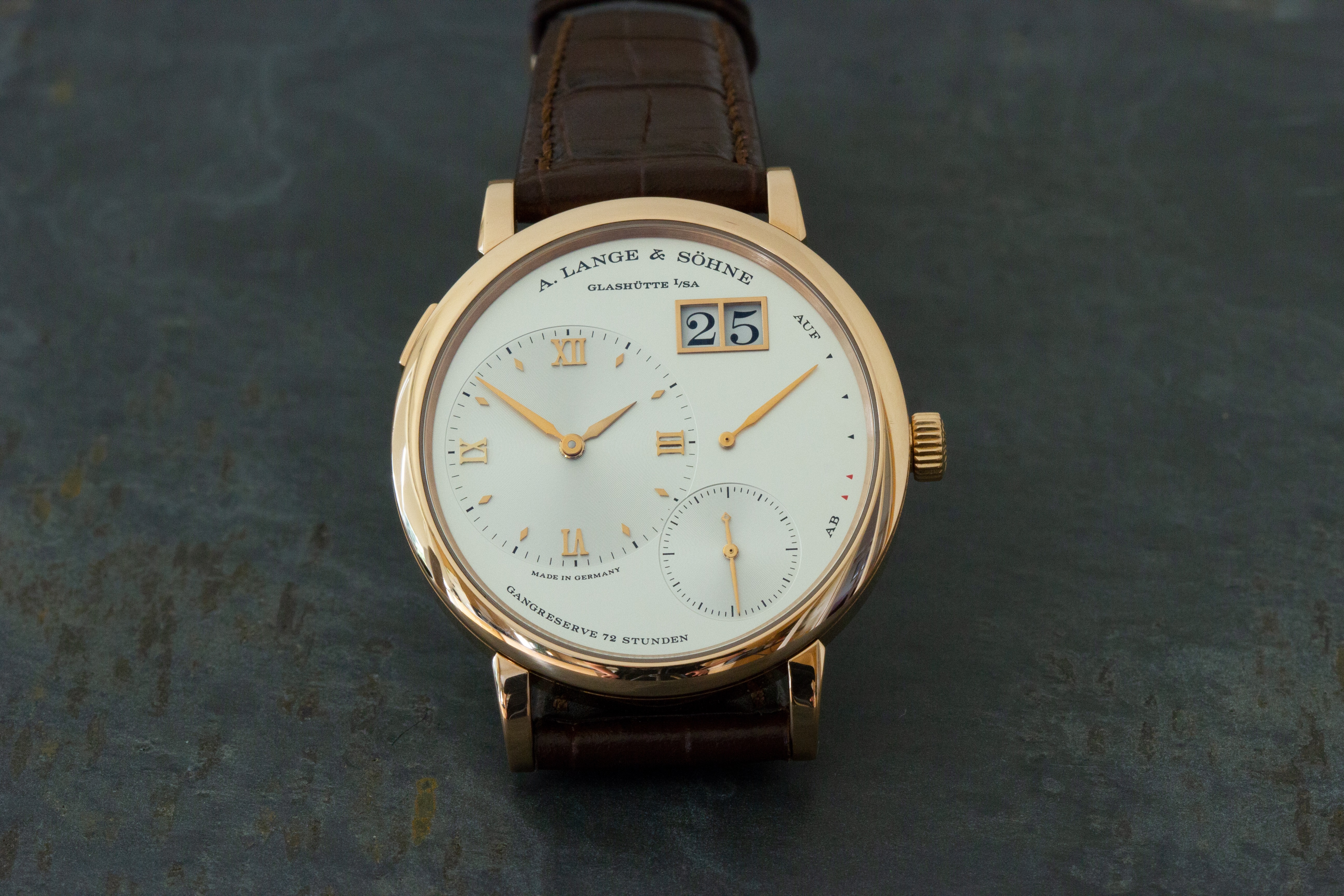 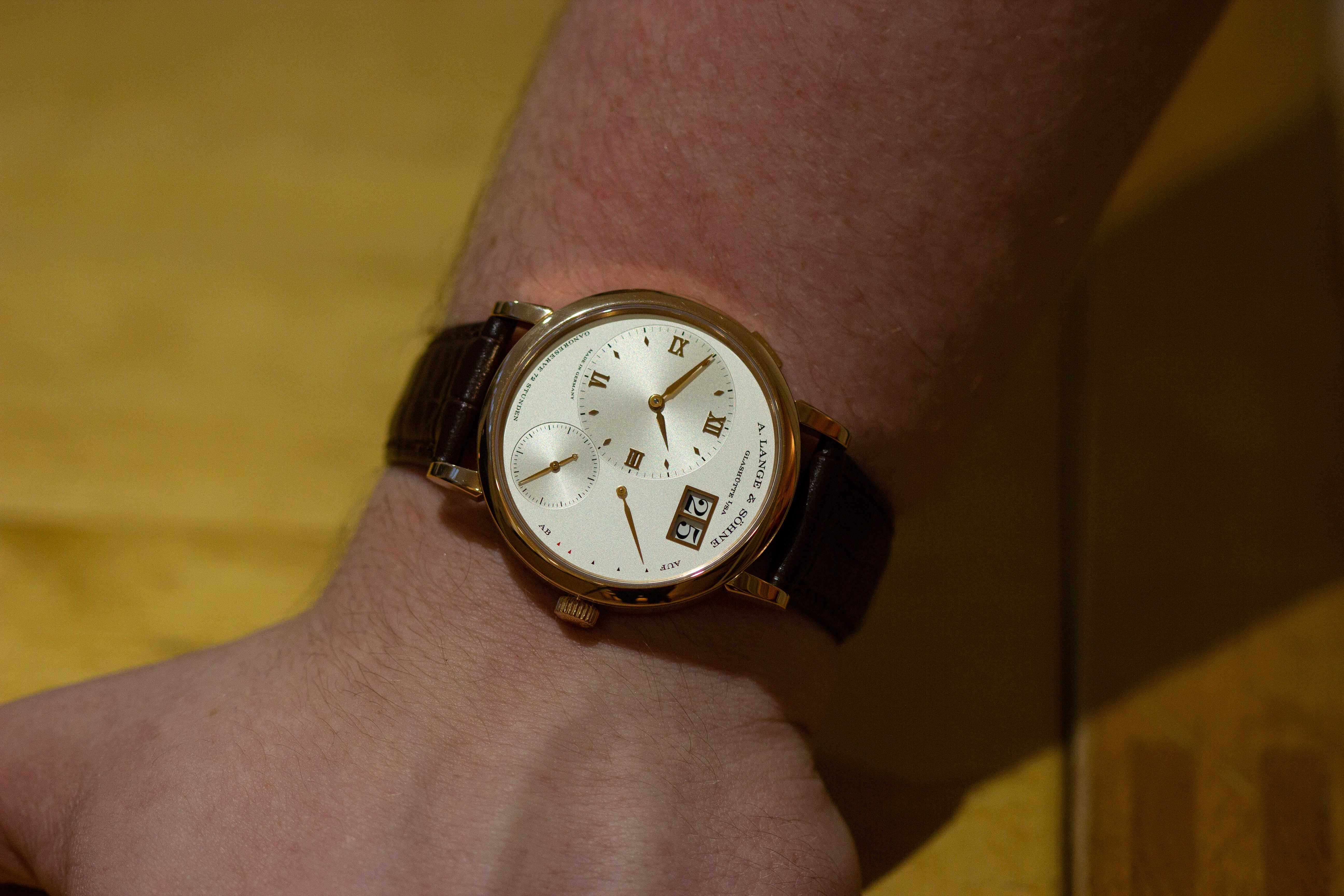 I want to start the two-week review by talking about the most important point first: the wearing experience. Okay, this, like design, is pretty subjective and I’m not expecting everyone to agree with me here. The Grand Lange 1, in my opinion, is probably the best feeling timepiece on the wrist that costs less than €45,000 new, it’s definitely one of the best I’ve worn and a highlight of the year for me. You know this watch is German right from when you pick it up, even with your eyes closed you’d know this because it’s a very solid timepiece. I’ve worn lots of luxury Swiss watches around this price point and all while they are all exquisite in their own right, all bar a couple feel dainty. The art of delicacy and finesse shows the true capabilities of a watchmaker, or does it? Because here I present you with a luxury watch that doesn’t necessarily fit that definition. 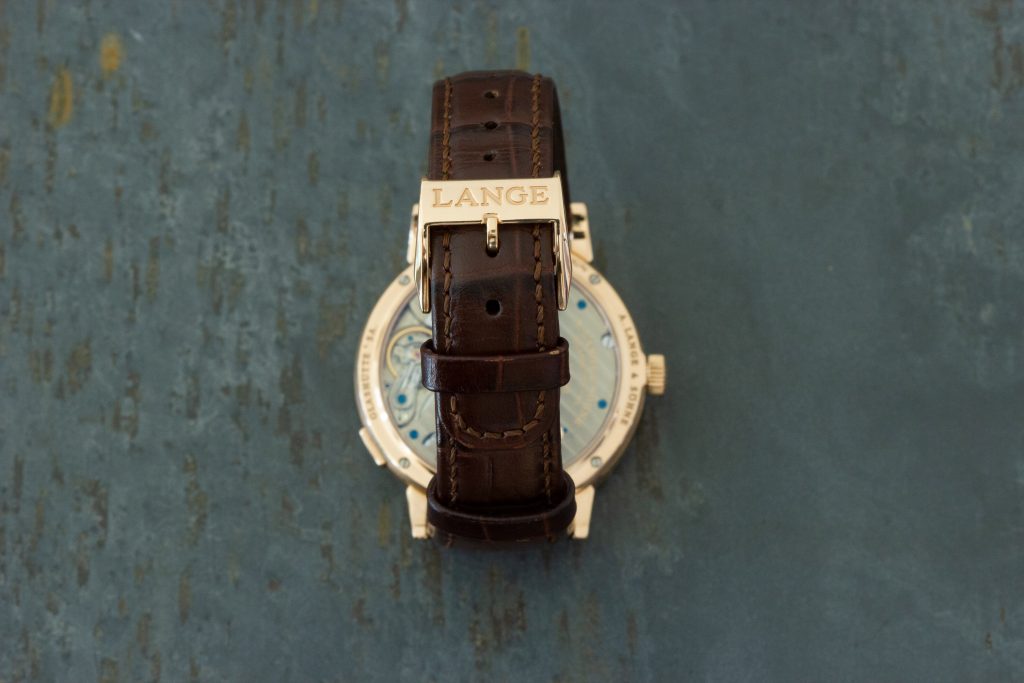 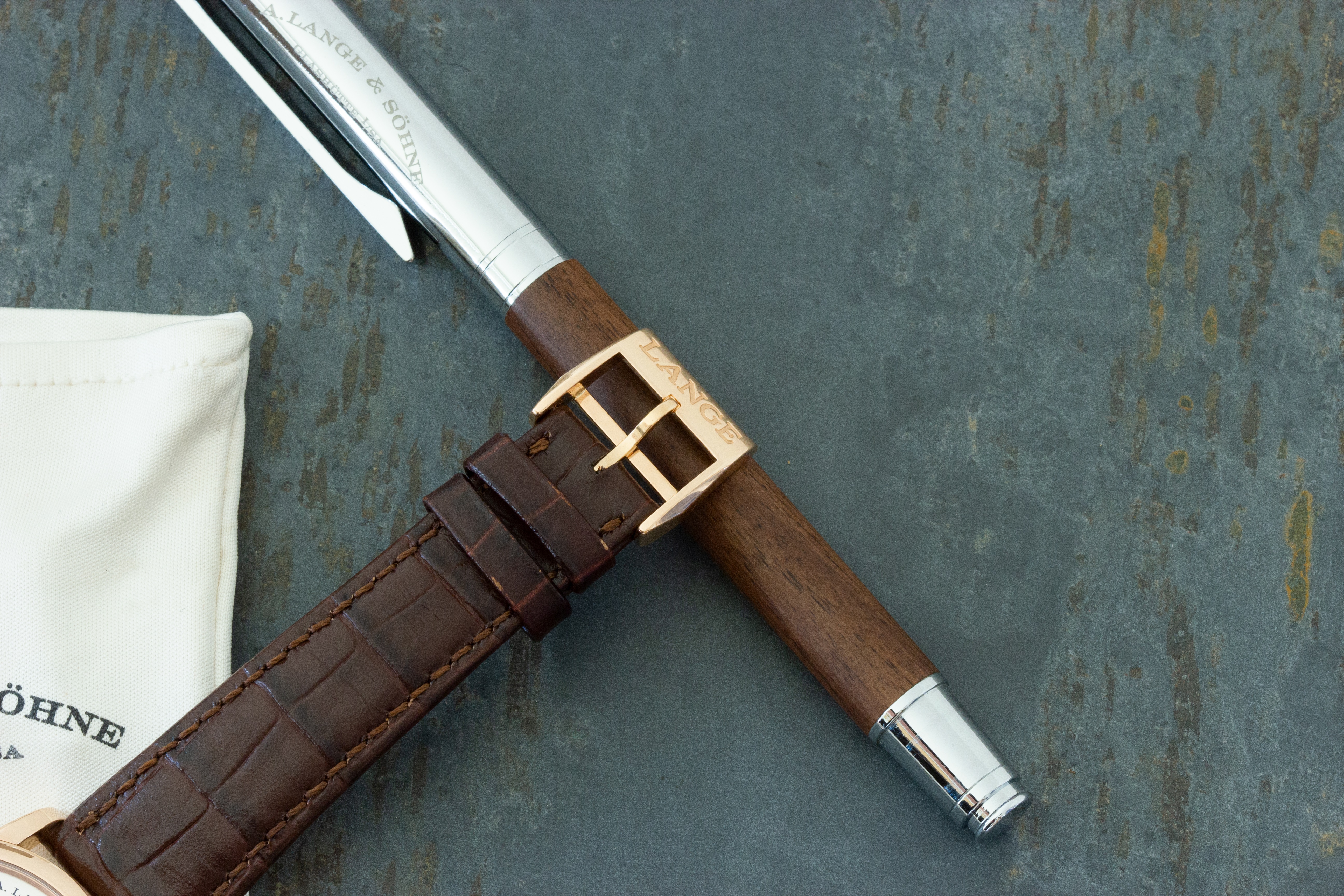 It’s heavy, the leather strap is thick, the clasp is very sturdy and the date pusher is the second best pusher experience I’ve ever had (if you’re curious, the butter smooth pusher on Breguet’s Classique Hora Mundi, but that’s way more pricey). 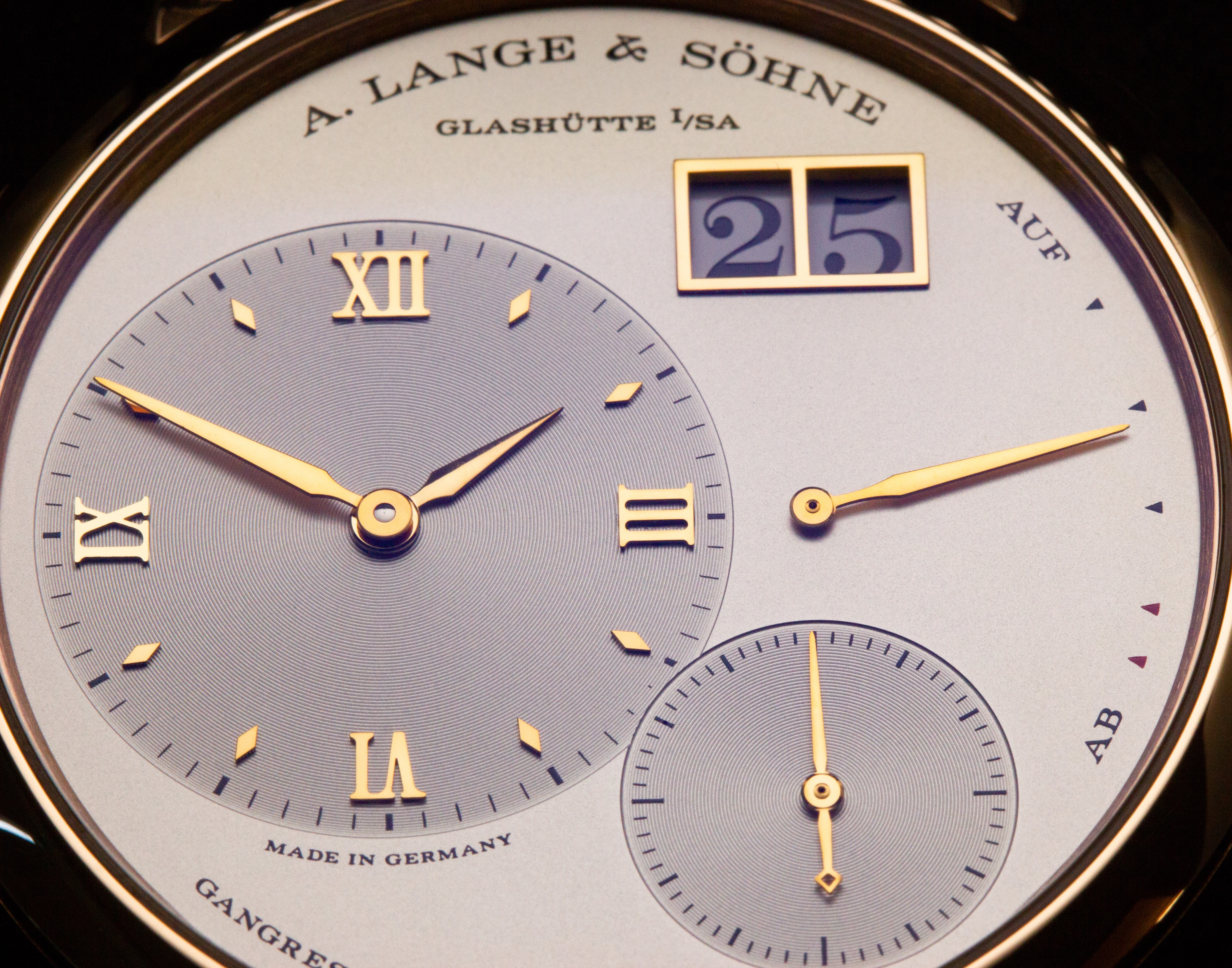 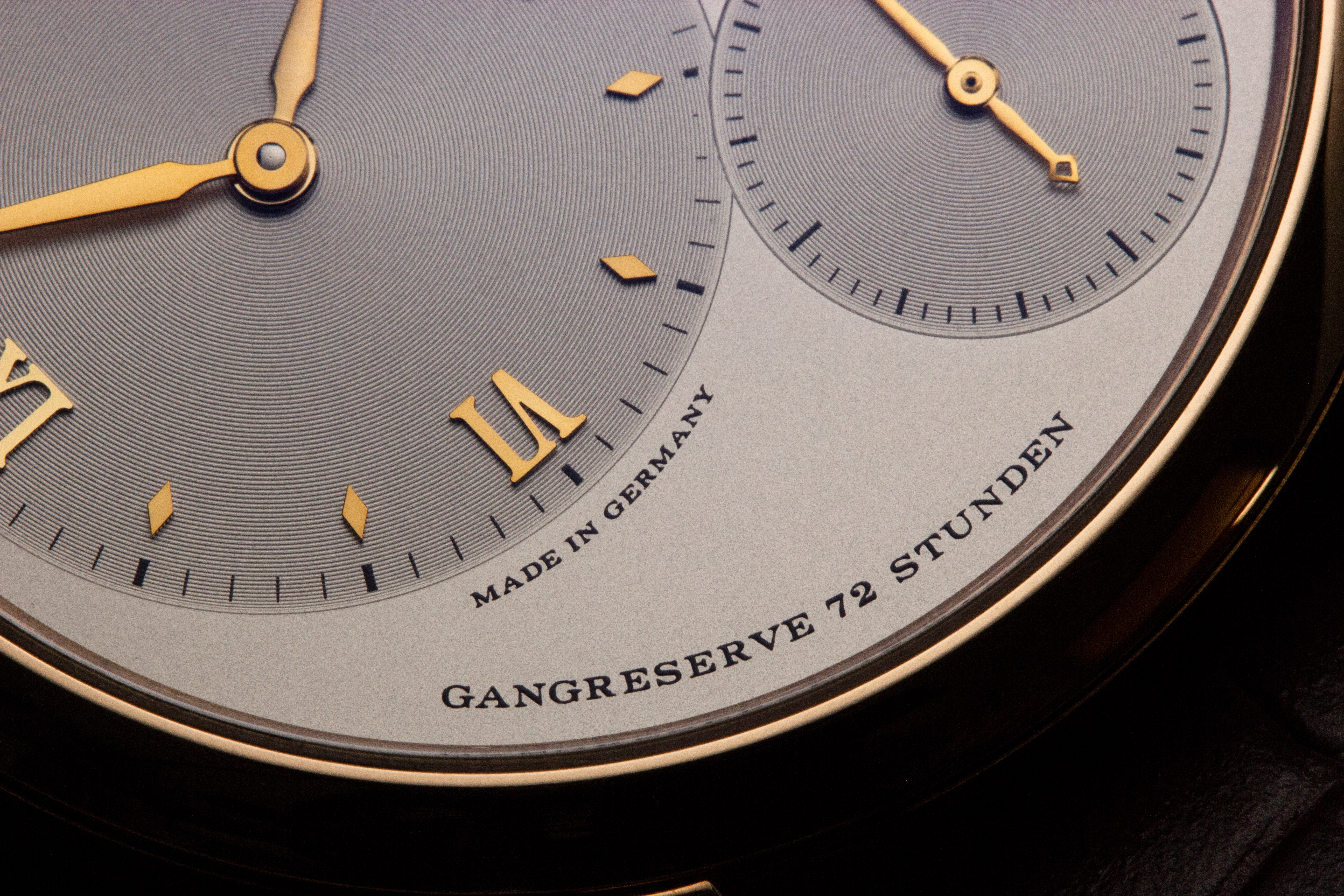 Yet, despite the large case and bigger, seemingly bulkier proportions, the watch is, in fact, elegant and subtle. It would help if you had a good loupe to be able to appreciate the circular guilloché on the dial of the argenté engraving that surrounds it, but you don’t need any magnification to be able to see the outsize date or the lancet-shaped hands. The mechanism behind that is precise and well engineered, so it works every time, all the time. I’d often set the date wrong so I could come back and depress the pusher to advance it, so I could hear the audible click from it pushing one or both of the disks forwards. The numerals are the best of any date window I’ve seen, there is no haziness here, you know this was done by hand, and it shows, they have their 3D effect if you can get the watch at the right angle. They are highlighted by a big window frame around them, which matches the case metal, in this instance, pink gold. 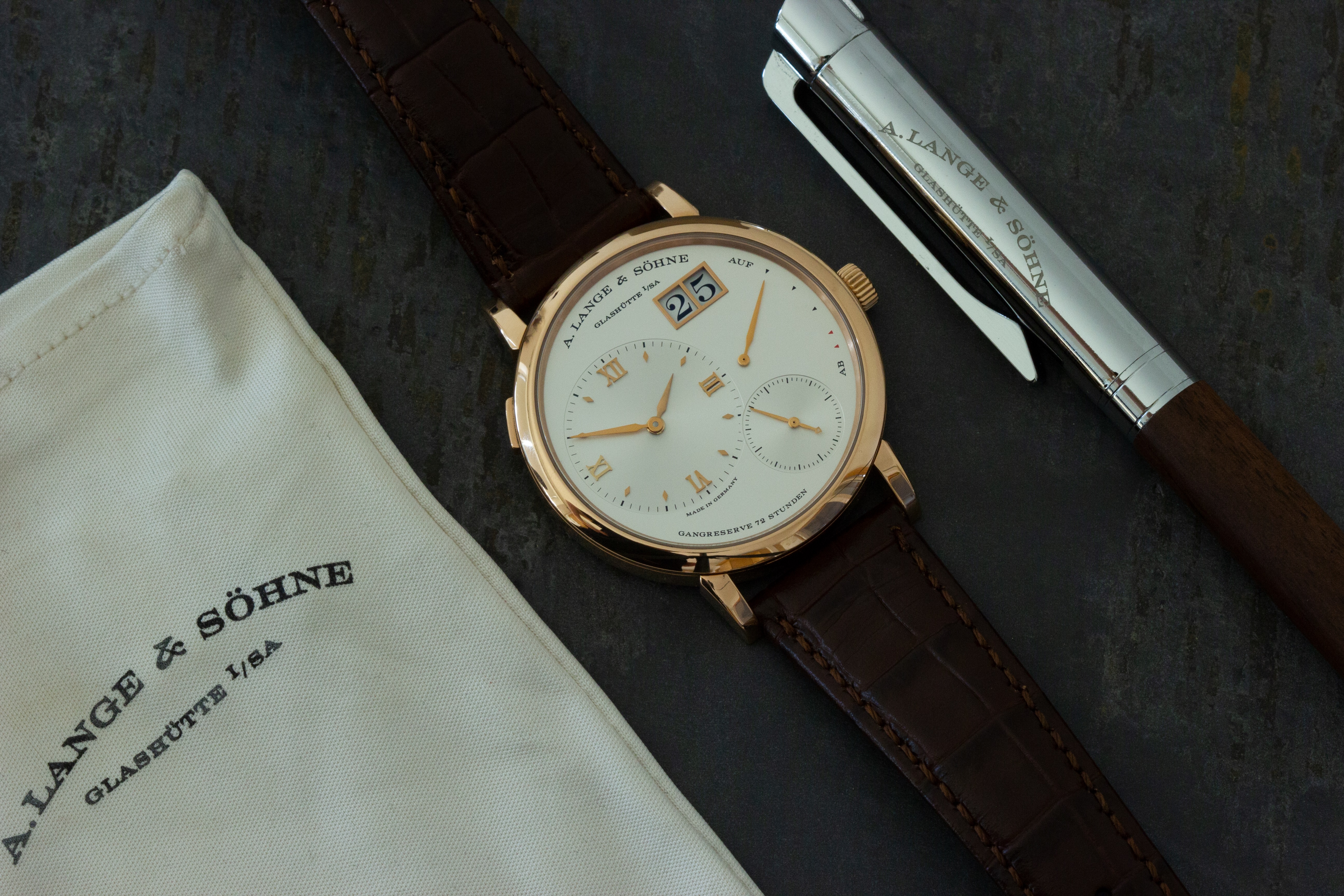 The case is solid and more substantial as well, more suited to the times with a diameter over 40mm, who said that couldn’t be dressy? It’s got a polished bezel, with a brushed case size and a polished caseback making it look slimmer than it already is. I have a larger wrist, so I don’t want a watch to be dwarfed, it wouldn’t seem right, cue the Grand Lange 1. 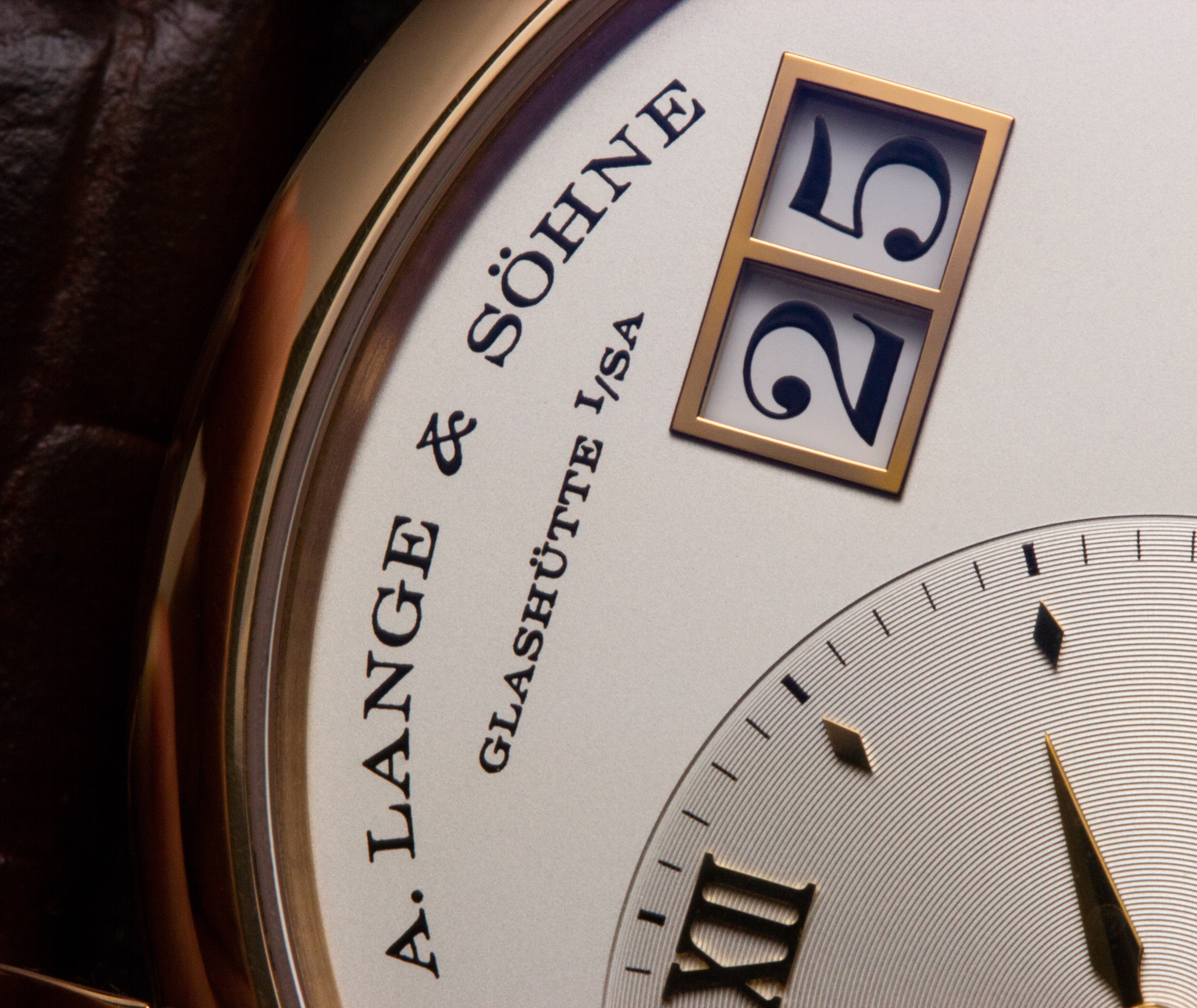 The way this watch works so well at this size, as well as the smaller size, comes down to the intelligent design. The dial uses a technique called a golden triangle (this could get a bit technical here). It starts with a right angle triangle based on Pythagorean theorem (that is, the sum of the square lengths of a right triangle is equal to the square of the hypotenuse, the longest side). However, the triangle is constructed using what’s called the ‘golden number’ which is 1.618 and is represented by the Greek letter phi ( Φ ). This works in the same way as a Pythagorean triangle, in that 1 + phi = phi², or the length of the hypotenuse, and it makes what’s called a Kepler triangle.  The three sides of a Kepler triangle can be calculated as a = 1 / phi, b = 1 / √phi and c = 1. In this case, 1 / phi = 0.618. 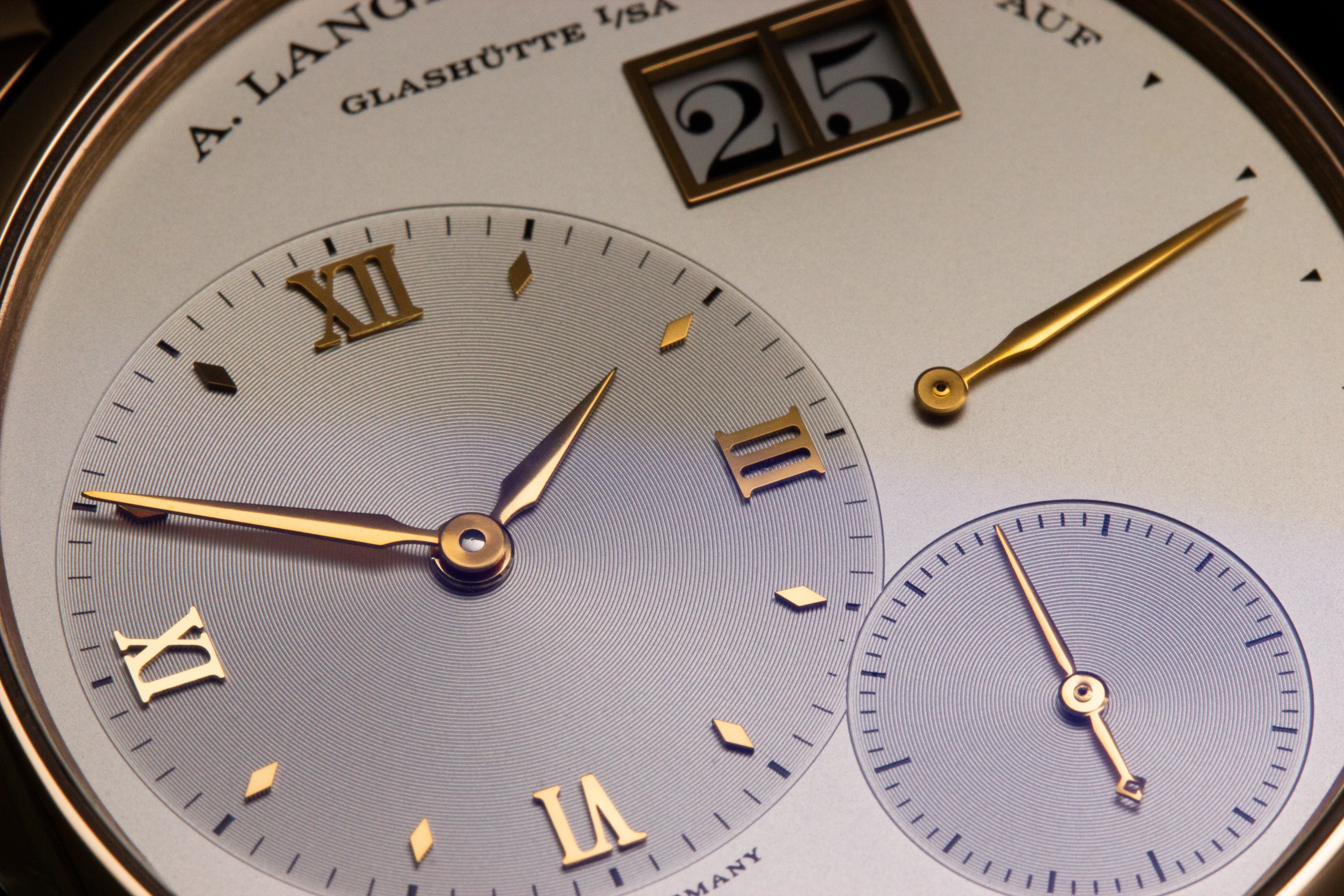 The ‘golden triangle’ which you’ll have seen on this blog before, and many others, is similar to the Kepler triangle in that it also uses a phi to 1 relationship, but this time it’s an isosceles triangle where the short length = 1 and the two longer sides = phi. As we know, the interior angles of a triangle on a plane must add up to 180°, the three interior angles for the golden triangle are (roughly) 72°, 36° and 72°. In the case of the Grand Lange 1 (and indeed the Lange 1), the triangle is lying on its side. The top of the triangle (36°) stretches from the top of the IX numeral on the hours/minutes dial and reaches out to the centre of the sub seconds dial and up to the middle of the Outsize date. This perfect triangle is Lange’s secret to proportionality in the Lange 1, and it’s why, no matter the size of the watch, it always looks the most pleasing, compare the Little Lange 1 to the Grand Lange 1, and you’ll still see that golden triangle. This makes the Grand Lange 1 one of the most mathematically perfect watches. 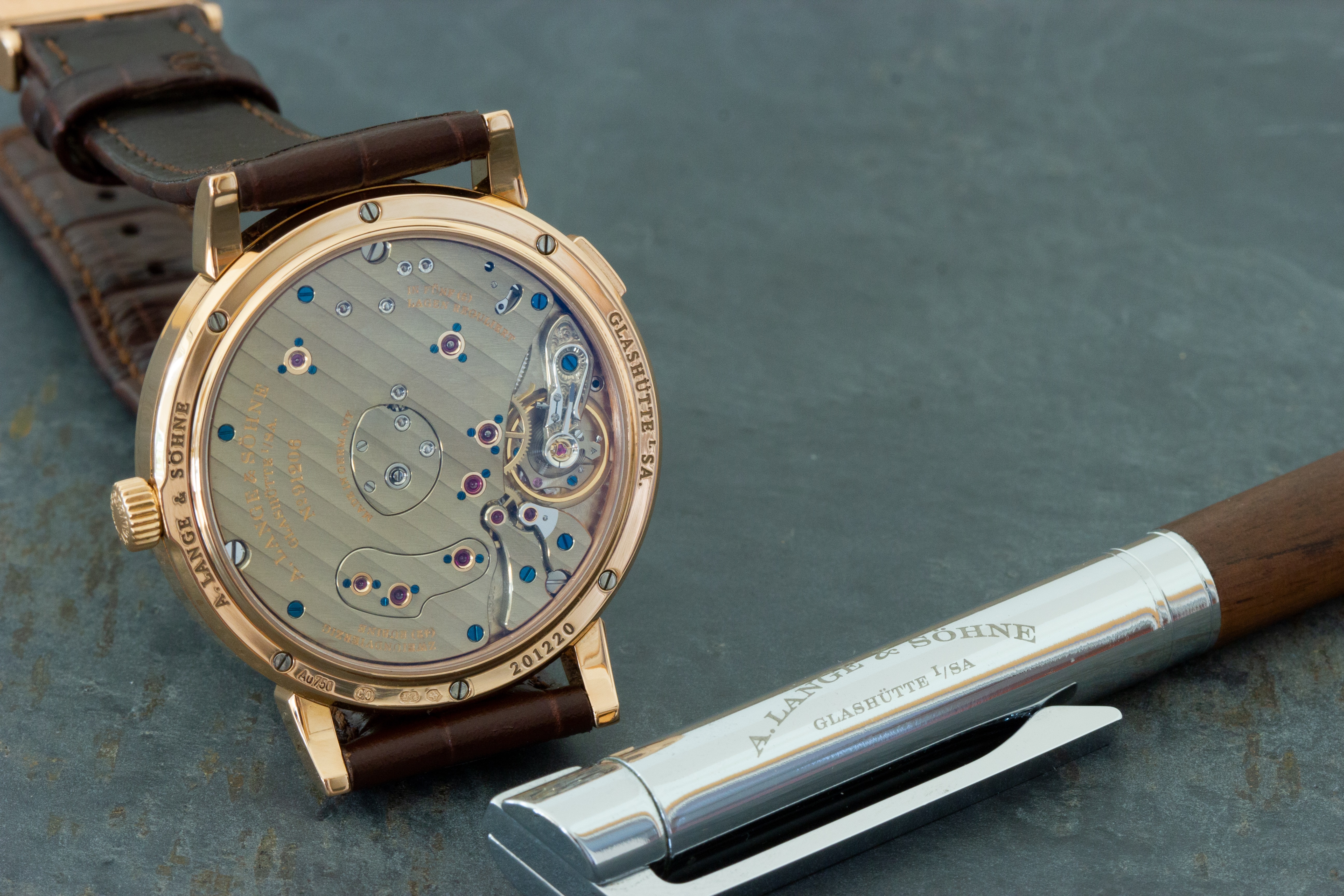 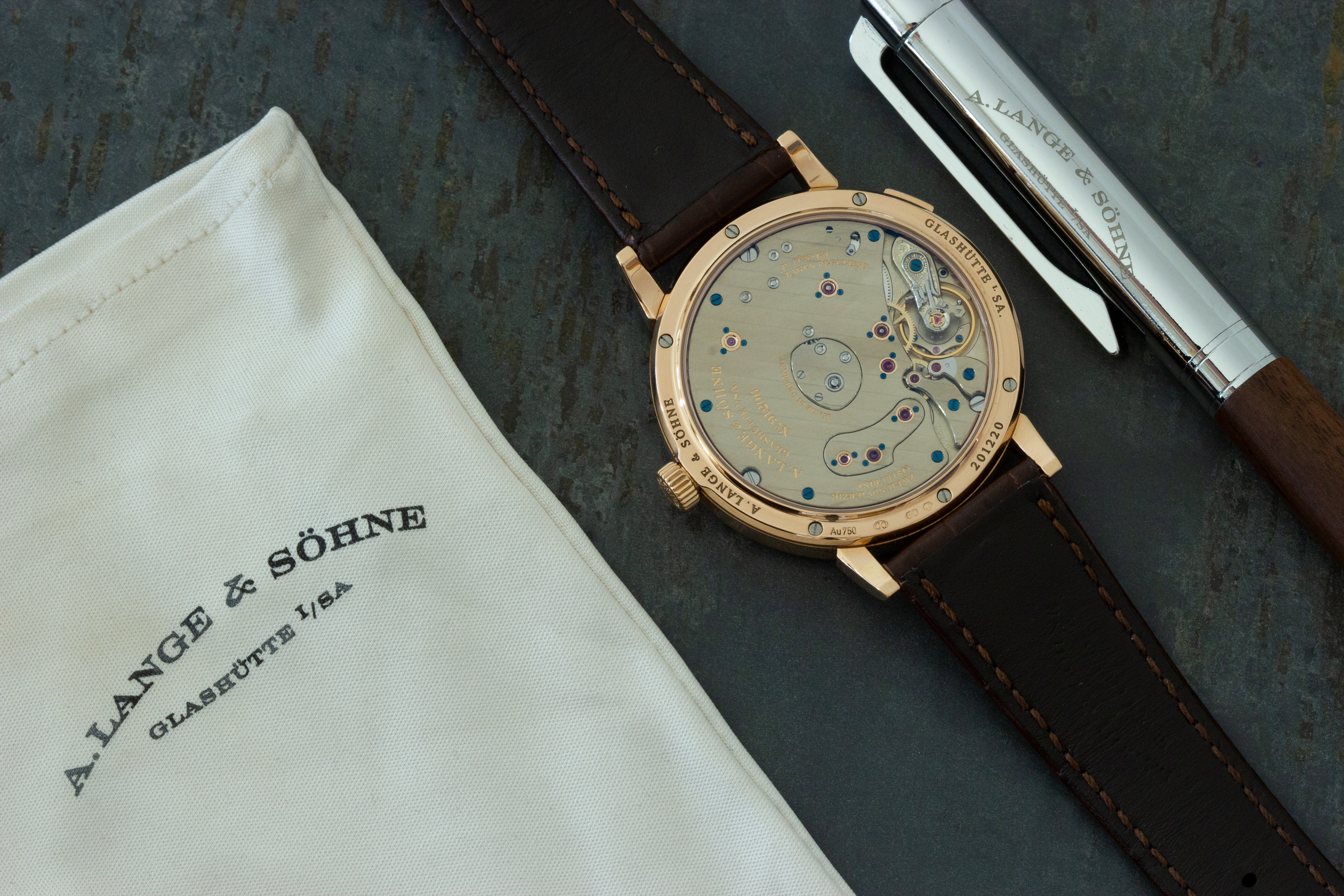 Coming down from all that crazy mathematics, let’s rest up by taking a look at the beautiful calibre L095.1 inside, or in this case, let’s take a look at the beautiful three-quarter plate of the calibre L095.1. As it’s always been on the Lange 1, most of the back is taken up by one huge plate, a traditional hallmark of Glashütte watchmaking. The baseplate is constructed of German silver, an alloy which contains no silver at all, but instead nickel, zinc and copper. You can see here how different sources of light change the hues on this wonderful material. Most of the close-ups were shot with cool hue light source diffused upwards, but where you see the watch on a lovely piece of slate I found, the light source is sunlight. This colouration changes again when viewed in person, it takes on a golden colour which, at least to my colour vision, seems quite similar to the 18k pink gold of the case.

Although there isn’t a huge amount to look at, it is exceedingly well finished with Glashütte stripes adorning the baseplate, with polished gold chatons surrounding the jewels of the movement. There angles here which have been exceedingly well polished, too. The balance cock has been hand engraved by one of the artisans, each of which has their own unique engraving pattern, so this Grand Lange 1’s balance cock will look different to the next. Sat on top of it is the swan’s neck regulator which has been beautifully polished up. On this watch, you can also see the stop seconds mechanism. A Lange & Söhne uses a variety of these on their watches, ranging from the most simple iteration seen here all the way to the zero reset stop seconds found on their Richard Lange Tourbillon “Pour le Merite”. The assembly on the Grand Lange 1 features a small arm which is pushed onto the balance wheel, thereby holding it in place, when the crown is pulled out. This isn’t the most gentle way of stopping an oscillating balance wheel, but then again, the only gentle way of stopping it is to let it run out of power. When the crown is pushed back in, the arm retracts, and the balance wheel recommences its motions. 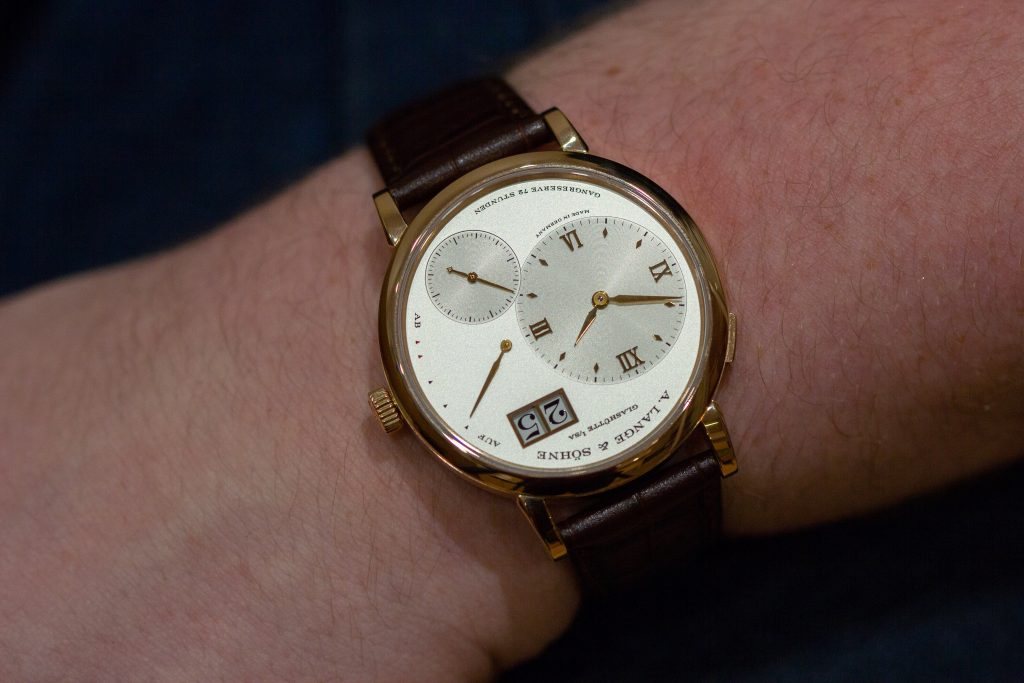 Let’s talk about the practicality of this watch. Obviously, it is no sports watch, so rough and tumble is entirely out of the question. Also, while you can wear it with your weekend clothes, you can tell that it’s not particularly comfortable with this. You could wear it with a polo shirt, but the results are similar. Really, to get the most out of this watch you need to wear it with a long sleeve shirt, but you can still keep the jeans to keep it a bit casual. From here on up to black tie, this watch sits perfectly. It just peeks out from under a cuff, looking ever so resplendent, and, because I wear the watch on my right, I can peek at just the hours and minutes from under a cuff with ease. If you’re a lefty, sorry I guess, you can see the power reserve which is nice, but unless you get the Lange 1 Daymatic which is the other way around, you’re kinda stuck here. 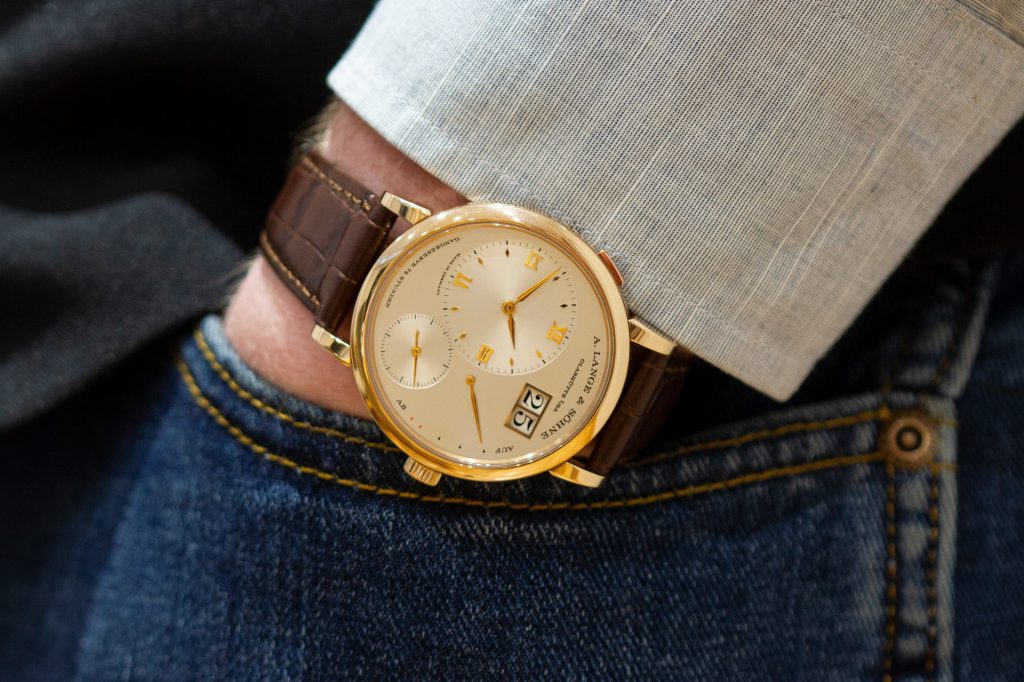 So, is the Grand Lange 1 the perfect dress watch? Well, it depends on how rigorously you take to the definition of a dress watch. If you are a hard no nonsense believer in two or three hands with nothing else, then perhaps Lange’s Saxonia Thin is more appropriate. I don’t stick too closely to the whole time only thing, I think this could well be the perfect dress watch, it provides a date, time, a power reserve and is now an iconic design. Maybe when Lange first restarted it wouldn’t have been so appropriate, but now it definitely is. Visit A. Lange & Söhne here.