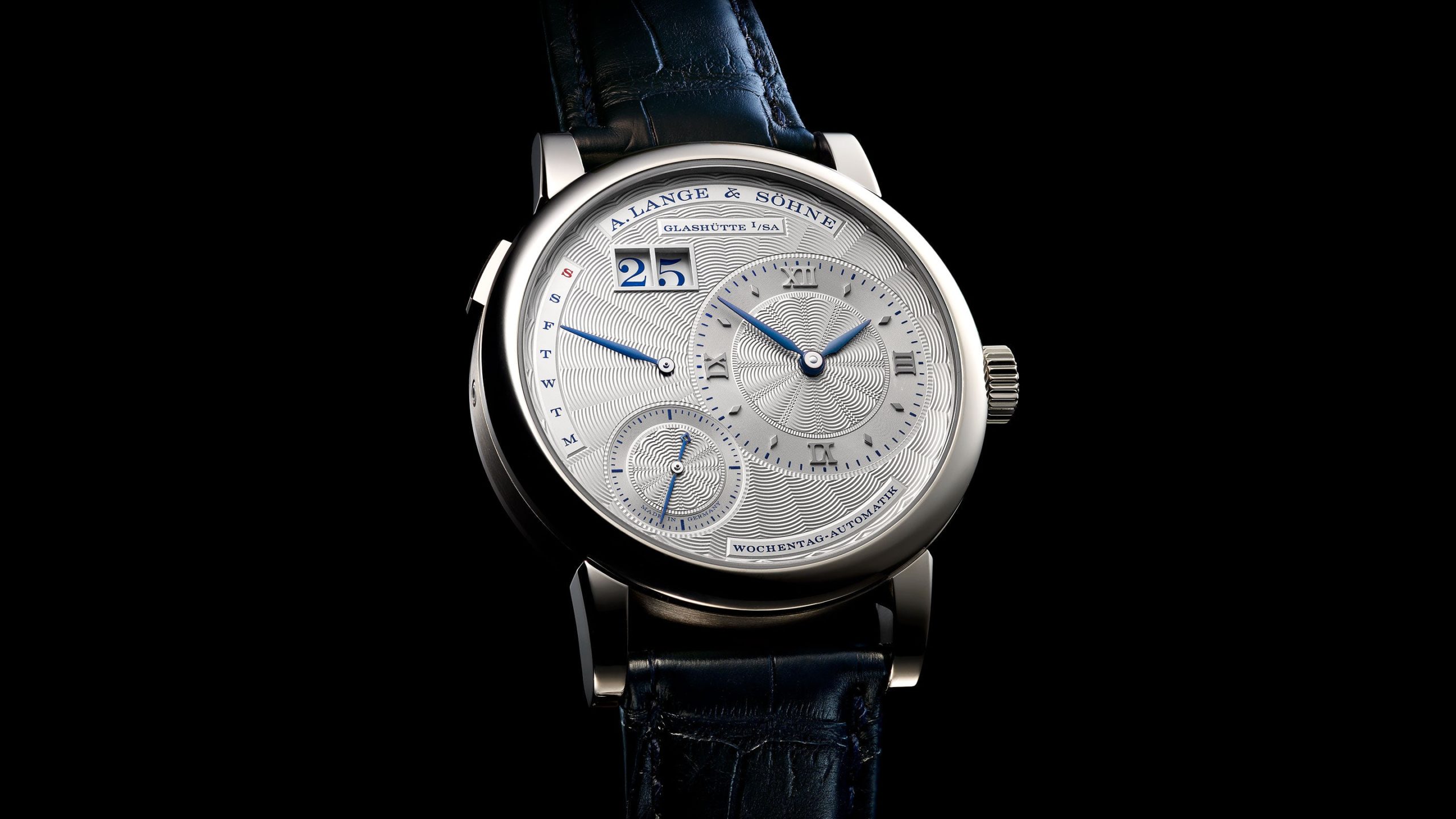 Unlike most companies I’ve seen, A. Lange & Söhne pays attention to the boutiques it has across the globe. They often get lots of special editions and host many events, as well as show off and sell Lange timepieces, obviously. For the last ten years, one of those boutiques has been located in the Ginza district of the Japanese capital of Tokyo. Famed for its bustling streets and high tech corporations, Tokyo isn’t exactly short of money, ideal territory for the boutique of a super prestigious watch brand then. 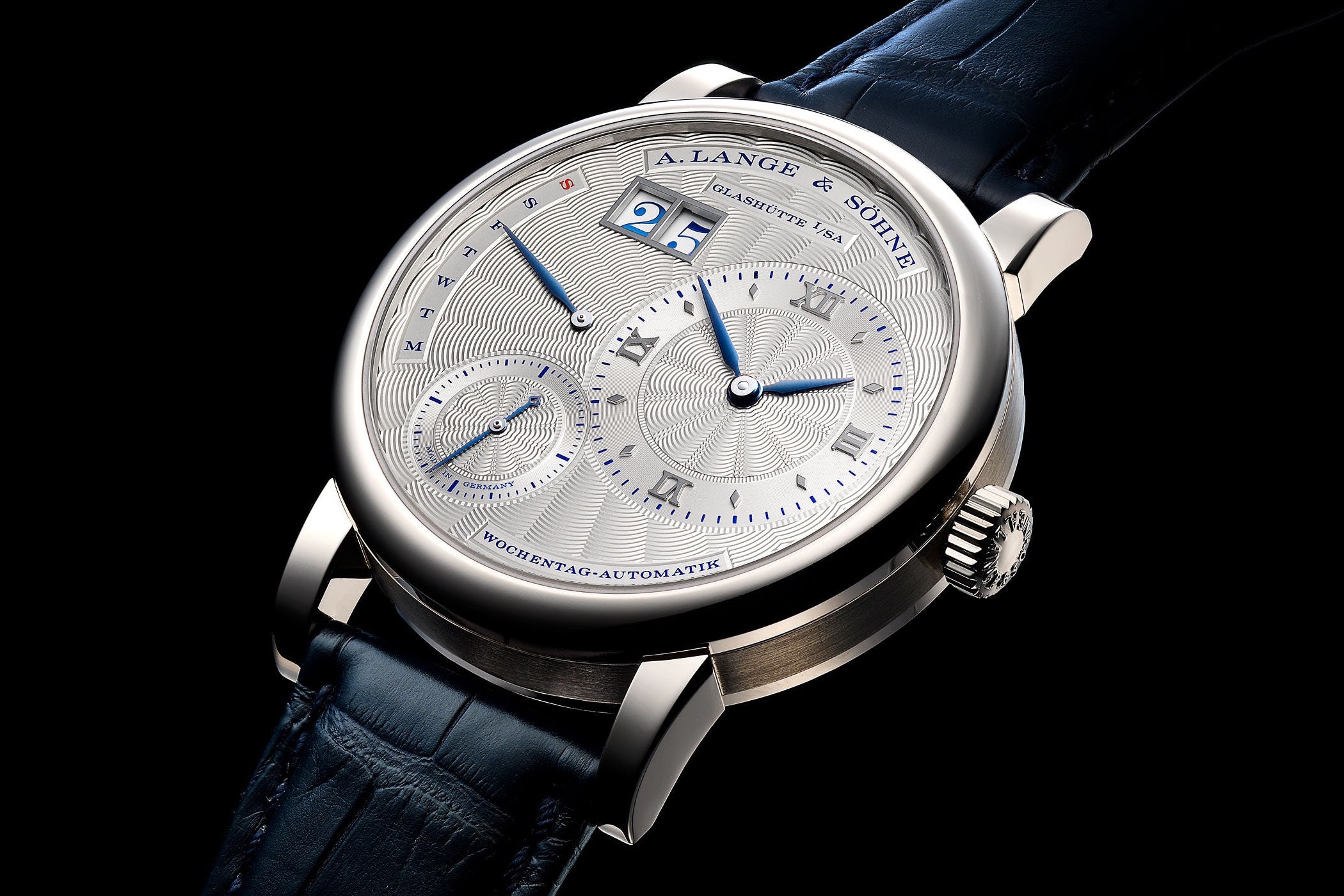 To celebrate, Lange reworked one of its more unusual timepieces, the Lange 1 Daymatic. I call it unusual for a couple of reasons: it’s one of only a handful of automatic watches Lange makes (the only other auto in the Lange 1 range is the Tourbillon Perpetual Calendar and subsequent Handwerkskunst version of that watch). Also, the dial on the Daymatic is back to front. If you look at a ‘standard’ Lange 1, the dial has the time on the left-hand side and the up/down power reserve indicator on the right. Of course, the Daymatic doesn’t have a power reserve indicator, as it’s automatic, unlike the Lange 1 which is manually wound. That means that a day of the week indicator replaces the power reserve, as well as the dial being switched around to help make the watch stand out a little. 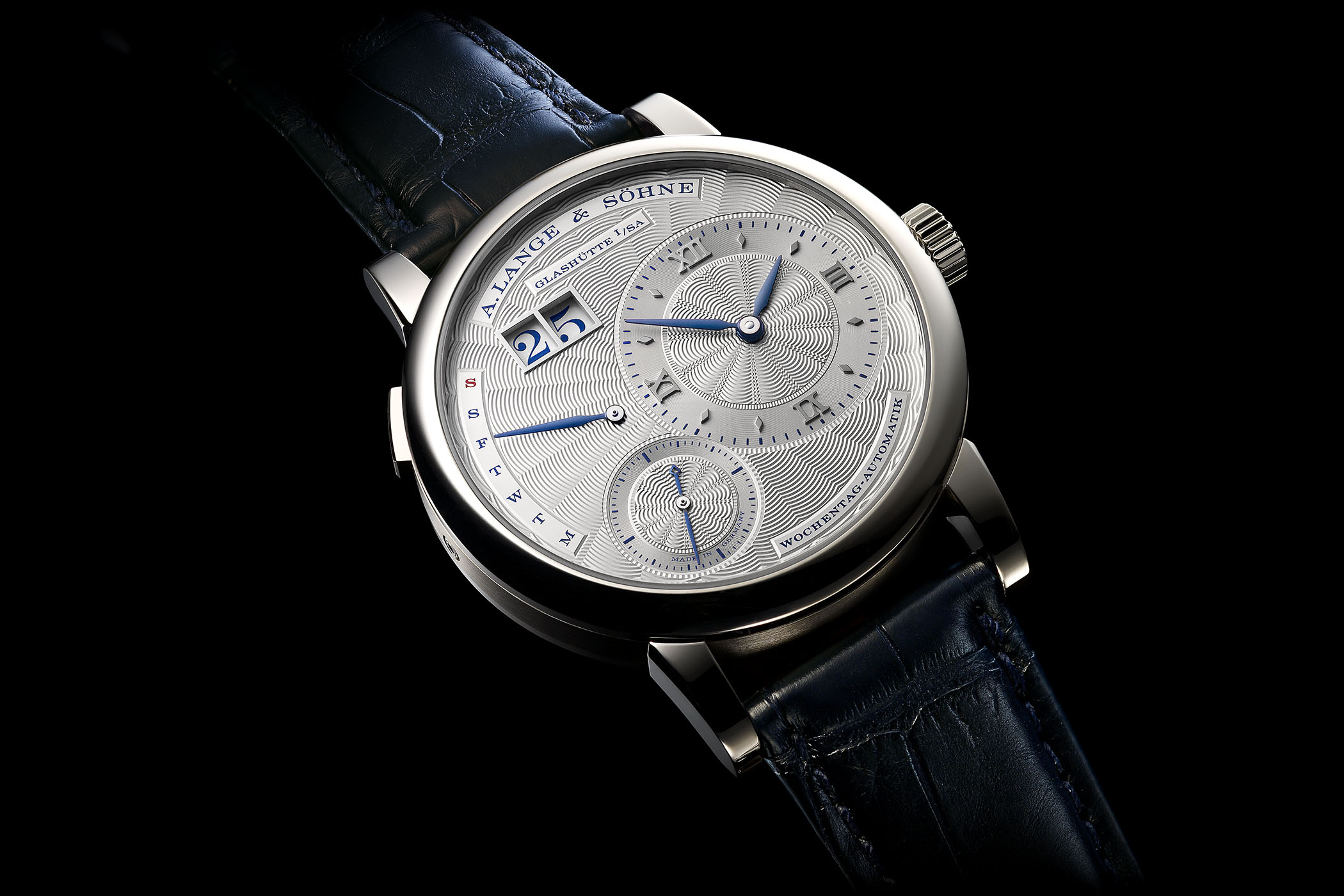 This special edition isn’t given the name ‘Handwerkskunst’ like other Langes which receive the top end treatment. However, it certainly does appear to be one. The dial has been given a lot of guilloché attention which, as you’ll have guessed, is all done by hand. Lange certainly takes no prisoners when it comes to making a special edition version of something, and quite rightly so, but I perhaps would’ve like to see a little decoration on the side of the case. I know it may seem a bit cheesy, but an engraving of the Tokyo skyline on the side might add something to the appearance. The watch doesn’t exactly lose out by not having this, though. 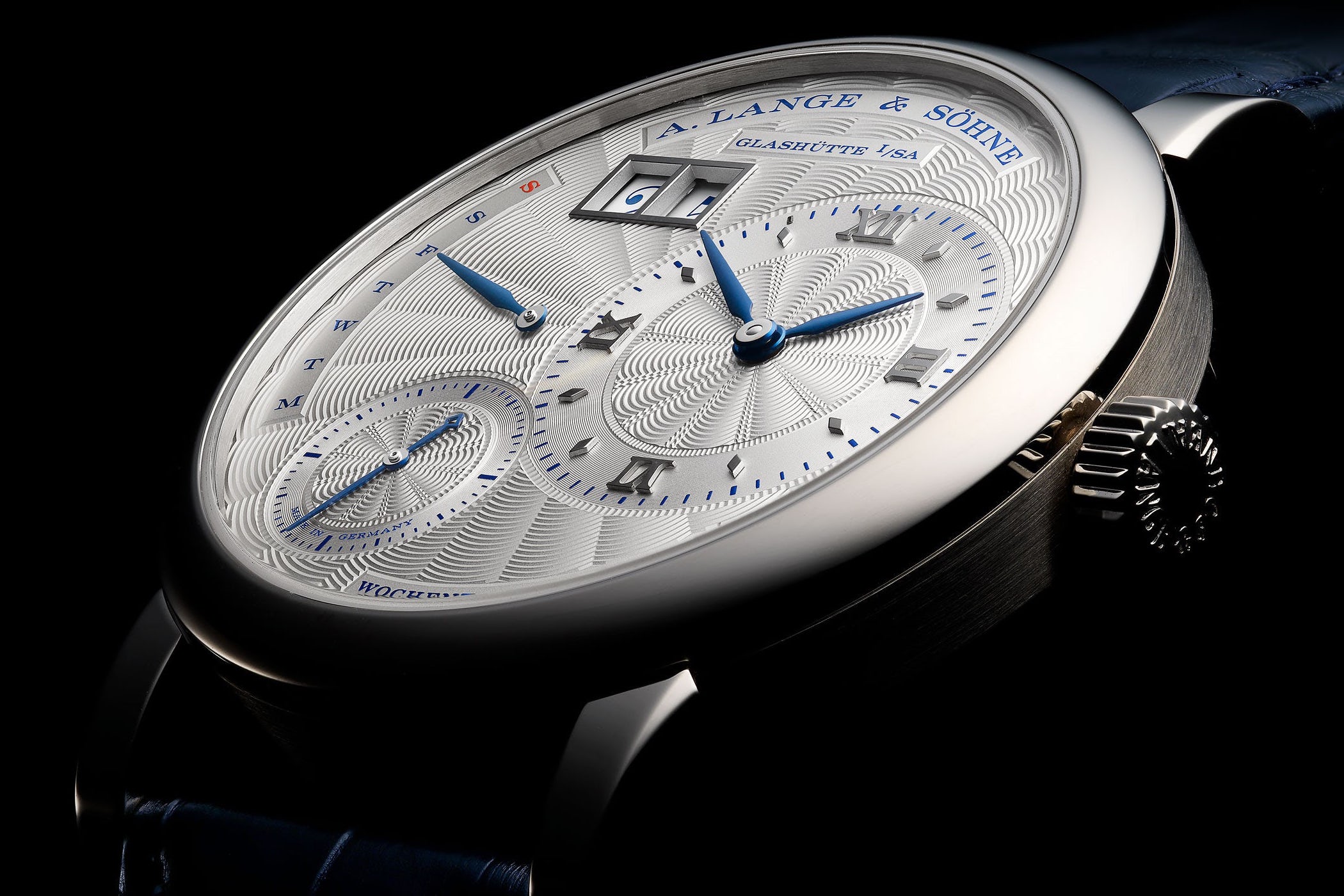 One detail on Lange watches that captivates me is the little plates with German words on them on the dials, which describe the complications inside the watch. One of those words is ‘automatik’, which is fairly obvious. The other is ‘wochentag’ which when translated means ‘weekday’, because this one displays the weekdays, naturally. Another small dial detail which you may have missed is the writing, all of it is in blue on this watch, with the exception of the ‘S’ representing Sunday, which is red. Even the numbers on the outsize date are in blue. To match the blue on the dial is a relaxing blue leather strap, one of the more adventurous colours for the Saxon watchmaker. 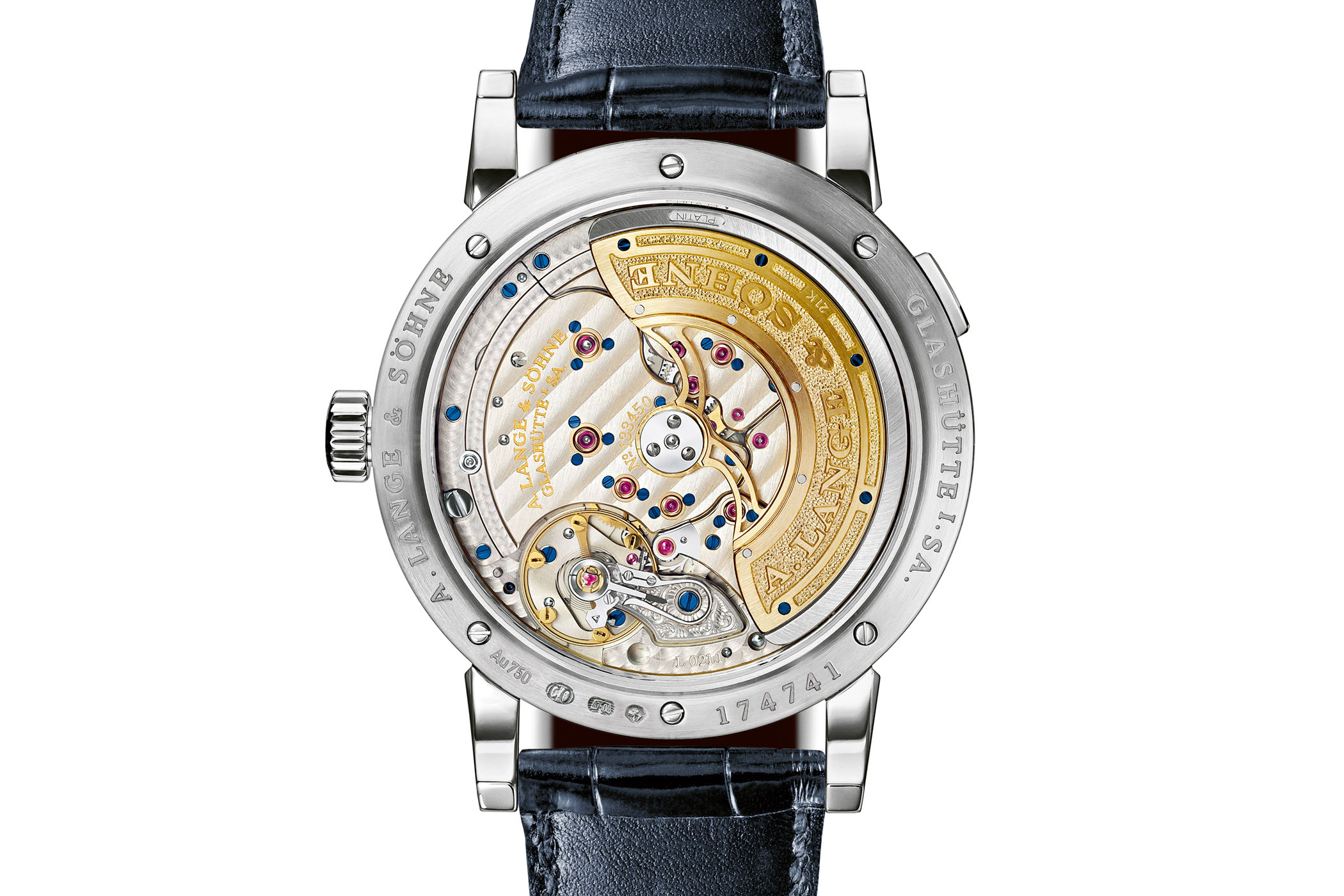 The movement inside is the same calibre L021.1 movement that is found in the other Daymatic watches; it’s supremely well decorated, I love the platinum outline on the gold rotor, just adds a little touch of class. It beats at 3 Hz and lasts for a good 50 hours when left to run by itself. All that is wrapped up in a solid white gold case which is 39.5mm across, but I wonder why it wasn’t just made 40mm?

The watch is limited to 20 pieces, which have most likely all been sold by now. For more info, visit A. Lange & Söhne online.