Most of you avid readers of Wristreview already know that I personally have a soft spot for horology that is different and breaks the mould of conventional watch making, a good example being HYT. Baselworld is the biggest watch and jewellery showcase of its kind anywhere in the world and this year I was lucky enough to get hands-on with the best that HYT had to offer and a few new releases that I cannot write about yet, but be sure as soon as I can you will be the first to hear about it. 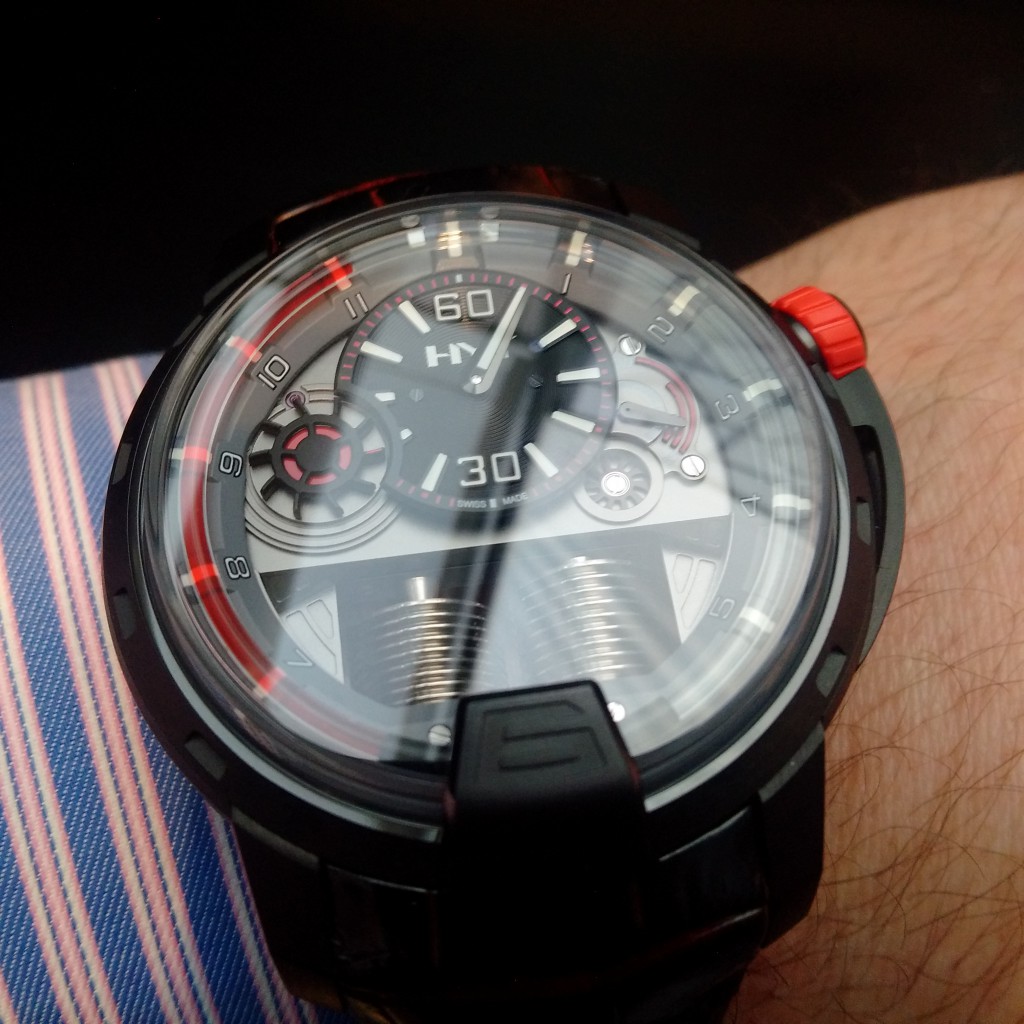 Having previously written about the Dracula it was good to finally place one on the wrist to see if the pictures did it justice, and boy does it. The titanium black DLC coated case with its blood red liquid sits menacingly on-wrist with the bellows moving slowly up and down mesmerising the wearer into its beauty. The splattering of red really popping out of the dial. 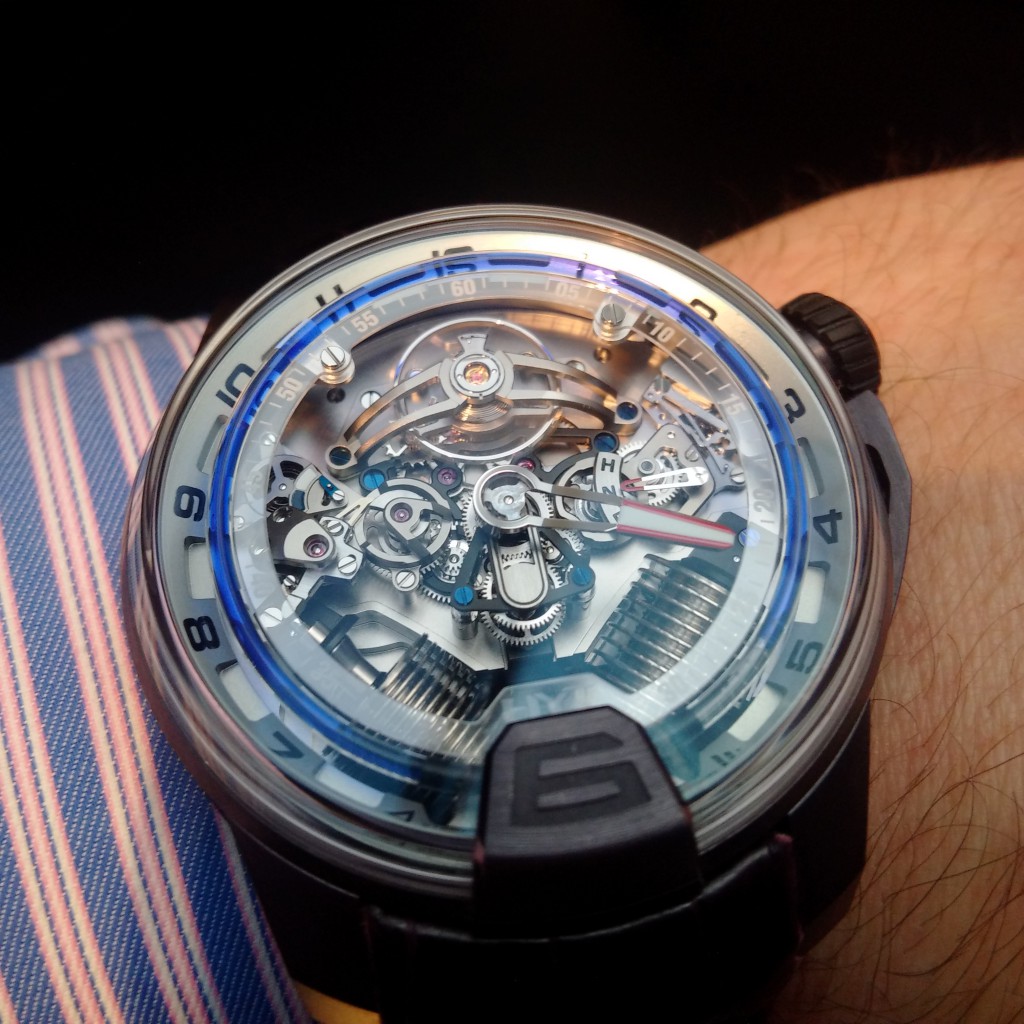 Nicked named the “FULL GUN” this stunning H2 has a titanium DLC coated case that’s been sand blasted to give a more matte look to it. Unlike the H1 this model has been open worked with the movement visible over the signature bellows now at a 45º angle. For the H2, HYT have taken away the small sub minute dial and replaced it with one single hour hand showing the minutes on a chapter ring just inside the liquid. The “Full Gun” features blue liquid to show hours which in my opinion really works and accentuates the blued screws on the movement. 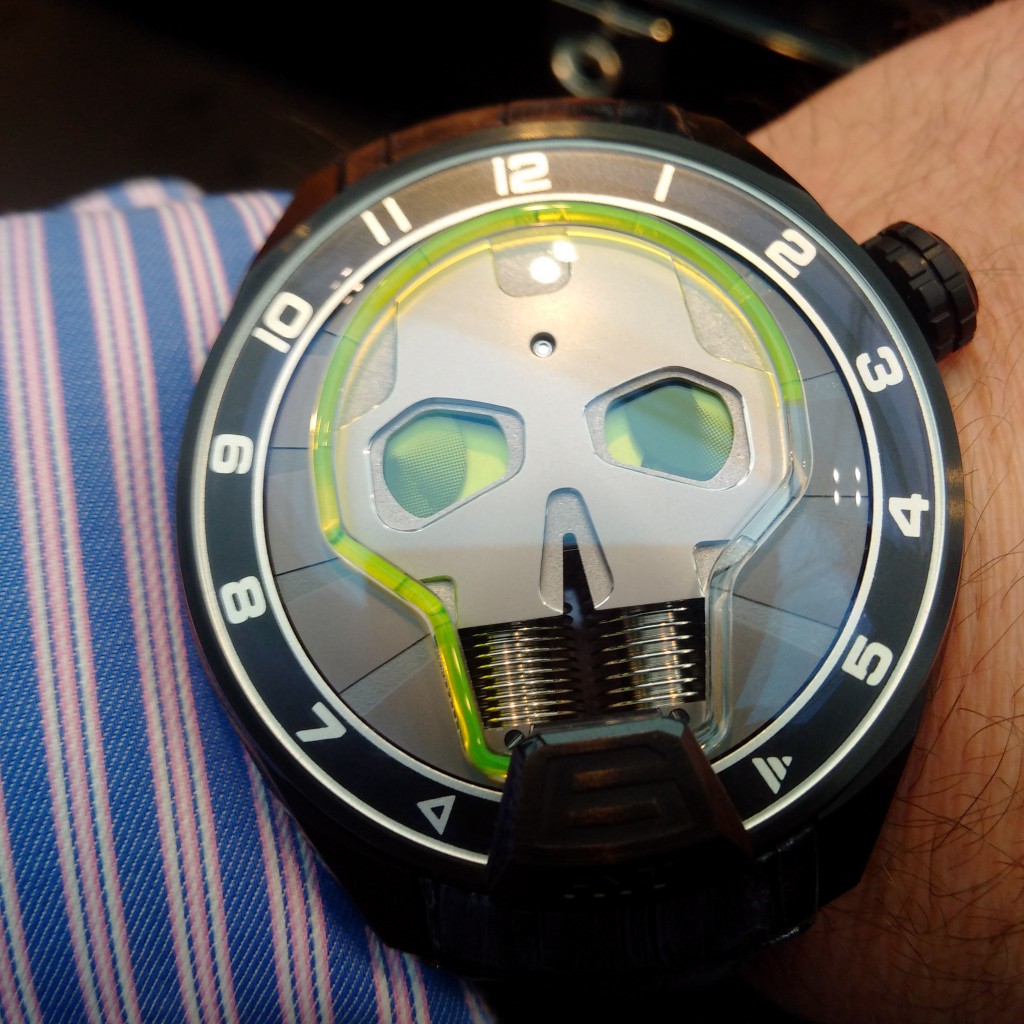 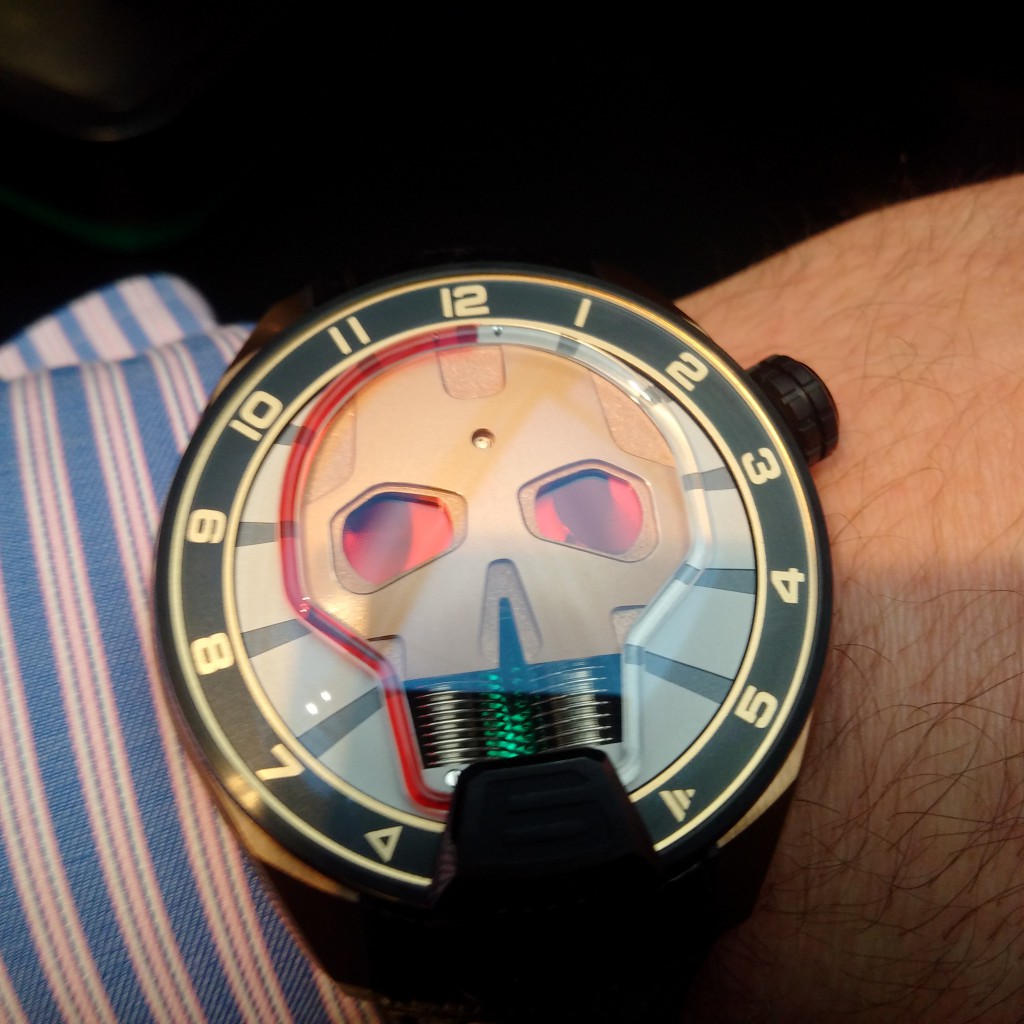 Skull Red & Green Eye – Love it or hate it, it’s here with a bang

HYT released the novelty that is the skull a few weeks before Baselworld, to very different opinions, the skulls seems to have divided people. They either love it or hate it and nothing in-between, well I think it’s a great novelty. The hours are marked round the outside of the dial with the green or red liquid following the contours of the skull, with only hour markers to show the time the wearer will never be able to tell the exact time but probably down to within 10 minutes or so but isn’t that the point of a piece like this? It’s more about fun than perfect time keeping. The right eye is the power reserve using a number of slightly different translucent inserts that gradually darkens as the piece runs close to its 65 hour reserve. The left eye hides a continuously rotating seconds indicator that’s barely noticeable. 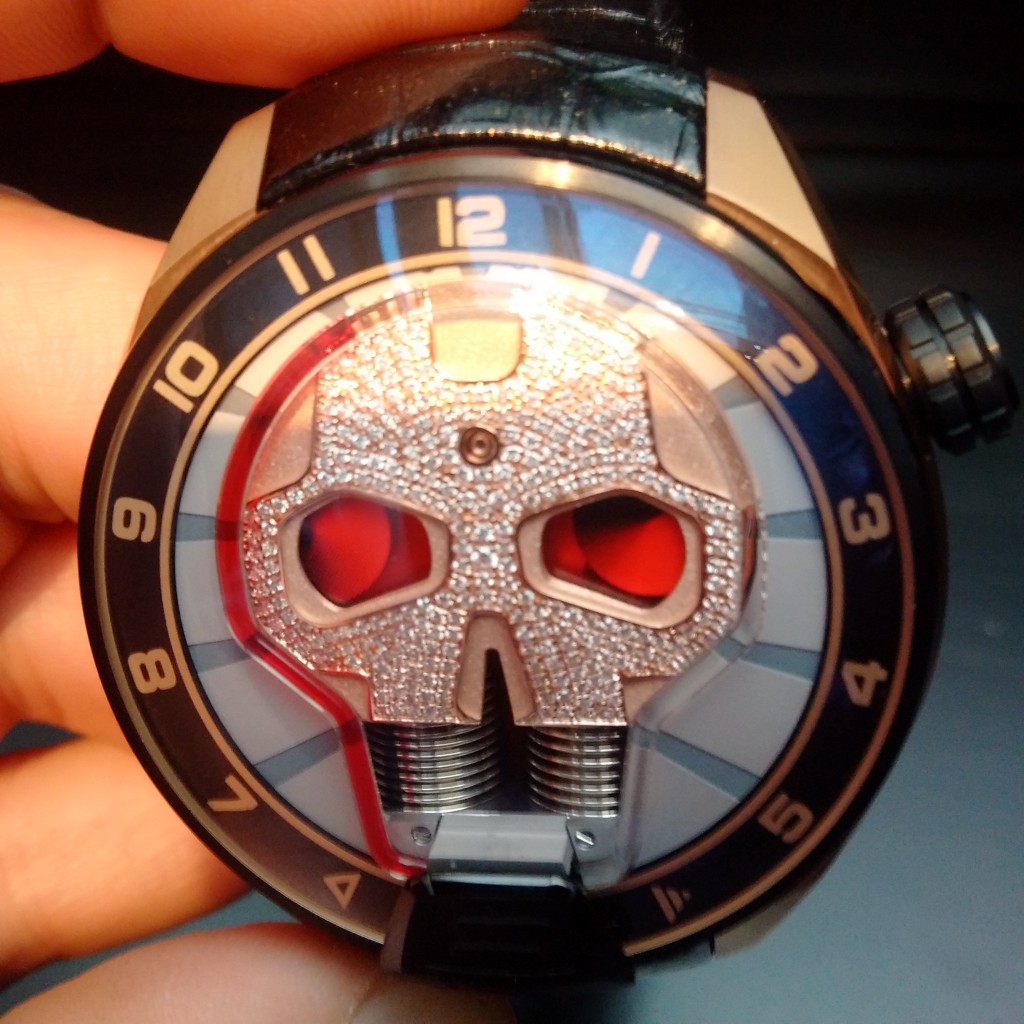 Now the Skull collection has been joined by a female skull version released at Baselworld with all the same aesthetics as this but now with diamonds covering the skull. 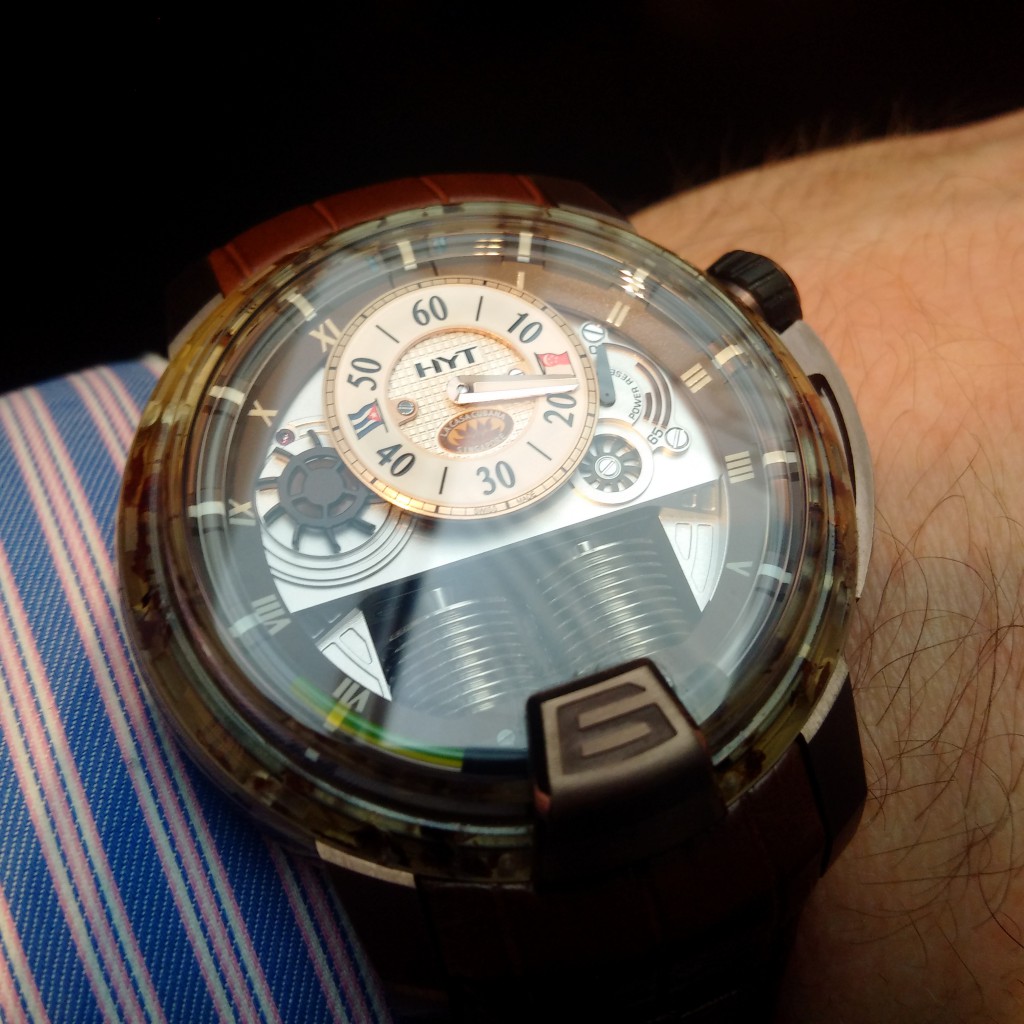 The HYT Cigar limited edition comes with its bezel inserted with cigar leaves. 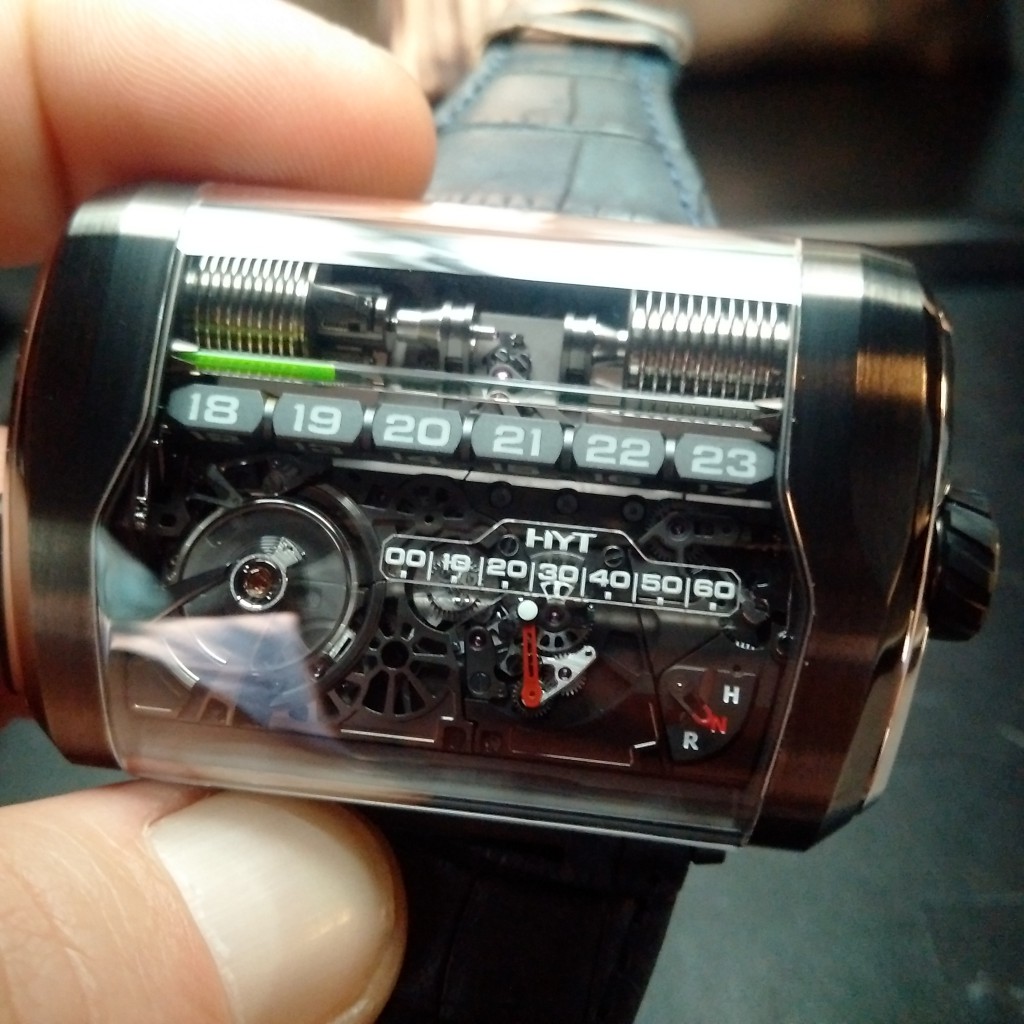 HYT released there much anticipated new model at Basel the H3 with its totally new case. The new H3 has a rectangular case with a linear liquid indicator for the hours meaning the liquid runs across the new case as opposed to hugging the outer edge. The H3 case is large measuring 62mm across, it feels wide on the wrist but not overly so. Unlike the H1 & H2 the H3 doesn’t have any hands, instead the H3 displays the time in 24 hours as opposed to 12 hour, with 6 cubes showing the hours rotating every 6 hours to reveal a new set of numbers 0-5, 6-11, 12-17 and then 18-23. This is viewed in conjunction with the liquid indicator bar just above them which moves thanks to the help of HYT signature bellows mounted either end of the capillary, in short like a cascading rock pool the bellows move the liquid, when the liquid reaches 60 it retracts and in turn move the hour block round to the next 6 hour segments, so all in all a marvel to watch.

I could have stayed for hours looking at and trying on the HYT pieces but sadly appointments at Basel are limited to 30 minutes, so I definitely made the most of it as you can see. These new pieces shown here will be released April/May this year so I will be reviewing them as soon as we are permitted to. For more info, please visit hytwatches.com

John Galt caught the horology bug back in 2010 on his first visit to a London watch show and has snowballed since; John has become an avid writer and blogger of timepieces of all kinds, from everyday timepieces to modern Luxury Haute Horology, his favorite brands being HYT and Greubel Forsey that push the bounders of modern watch-making. John keeps a keen interest in the UK watch scene with their many emerging brands and timepiece’s. John Galt currently contributes watch related articles for online publications in the UK and USA. You can follow John on Twitter @johng73 Read his articles here.