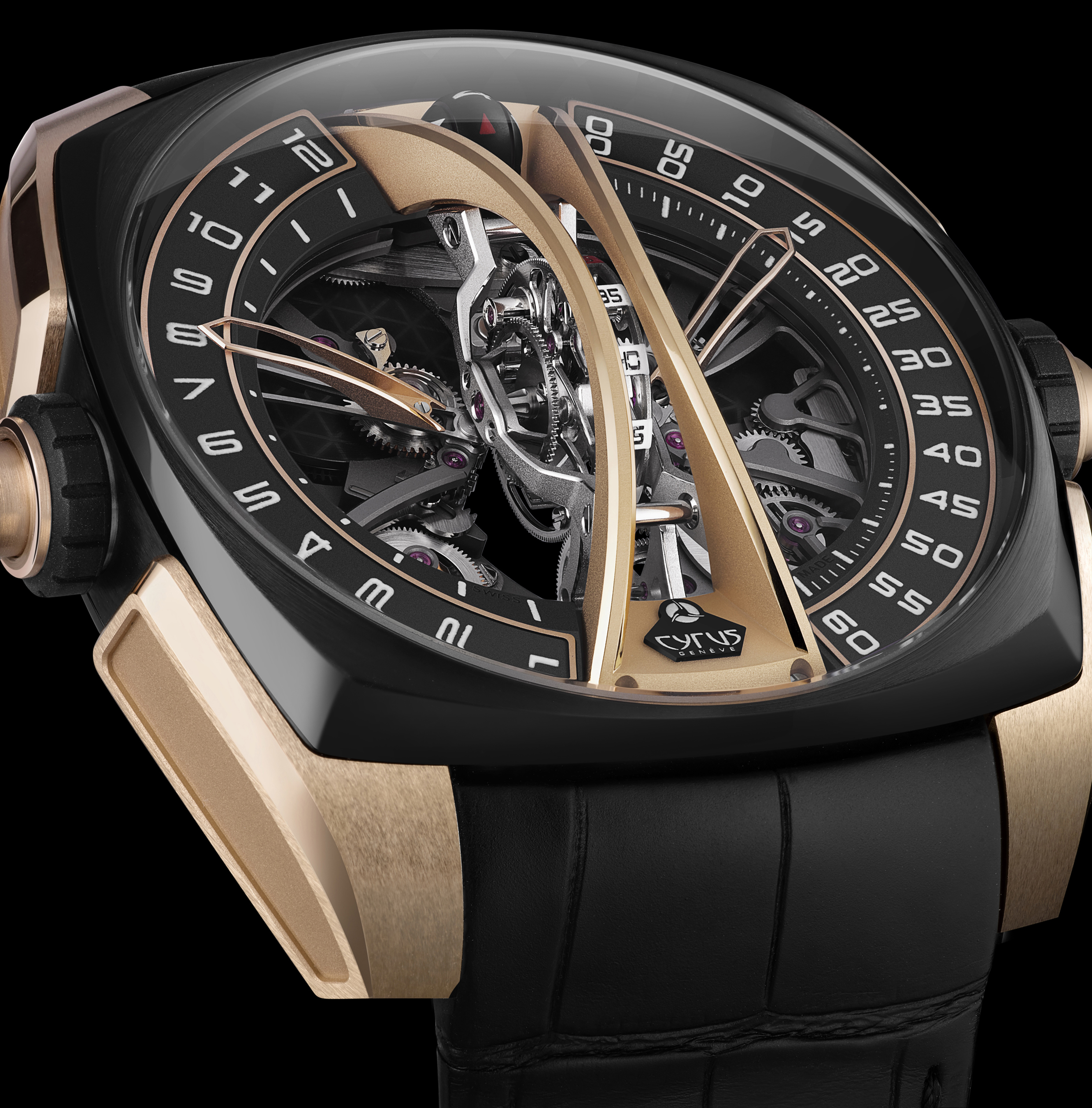 Although Baselworld is over, there’s no rest for the weary journalist as we soldier on bringing you all the best watches we can along the way. This time, we shift our focus to a very small and relatively obscure independent watchmaker called Cyrus. Based in the watchmaking centre of Le Locle, Cyrus watches are extremely unique creations, worked on by master craftspeople. The three new watches presented are just some of the evidence of how formidable this watchmaker is.

The odd name, Cyrus, comes from the ancient king, Cyrus the Great. Under his rule, the world saw the first Persian empire rise. This would be the largest empire the world had seen at the time, stretching from the Dardanelles to the Indus River which flows through China, India and Pakistan.

The Klepcys Vertical Tourbillon was introduced in 2018 and was Cyrus’ first crack at the complication. The idea being that a vertically mounted tourbillon will overcome the forces of gravity experienced while the watch is being worn, as a traditional tourbillon is laid flat where its functions are somewhat limited. In this watch, it’s mostly hidden under a big central bridge, but it is there and looks fit to be in an ultramodern architectural building, like some high-tech water wheel perhaps. Incidentally, the inspiration for this bridge design was Leonardo Da Vinci’s ingenious self-supporting bridge. 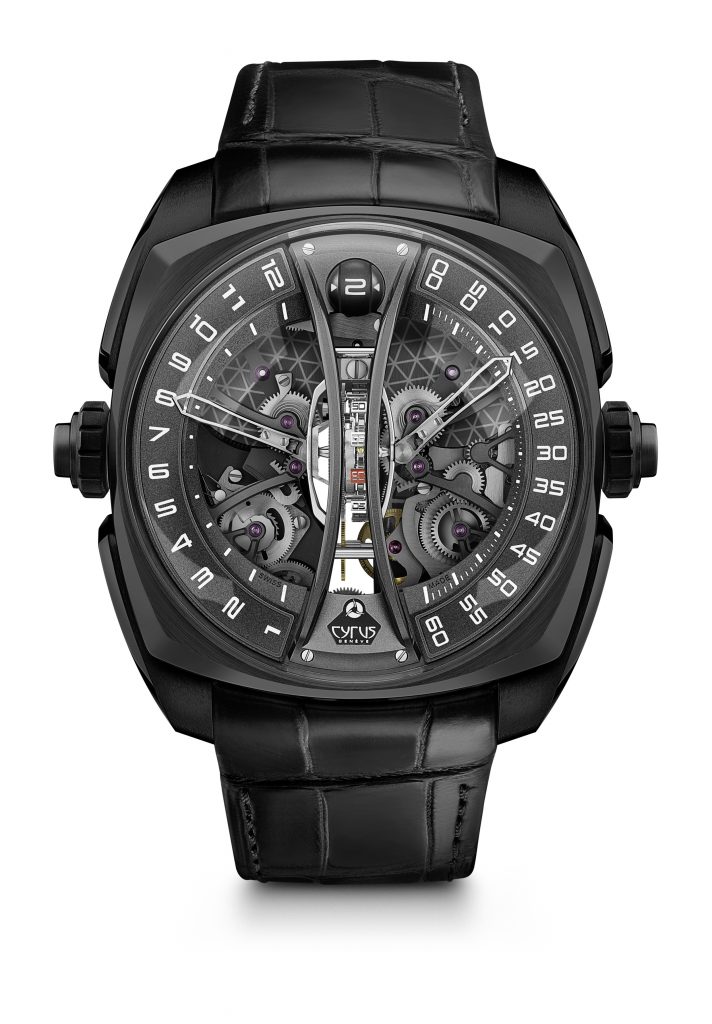 The display of the passing time is unique as well. Two retrograde hands either side of the tourbillon indicate the time, the left-hand shows hours and the right-hand shows minutes. Finally, small blocks on the tourbillon’s edge cage allow you to see the seconds, with the 60 seconds marker highlighted in red. You might have noticed the small sphere in between the bridge components. This sphere, decorated with microbillé (shot peening), indicates the number of days remaining in the power reserve excitingly, the power reserve is a meaty 100 hours. The dark grey galvanised bridges are also decorated in this manner to give a modern feel to the dial contrasted by the exposed retrograde systems which are a mixture of brushed and mirror polished. All this sits under a curved sapphire crystal which is 1.2mm thick. The mastermind behind this masterpiece is an unsung hero of the watch world, Cyrus’ technical expert and watch developer Jean-François Mojon. 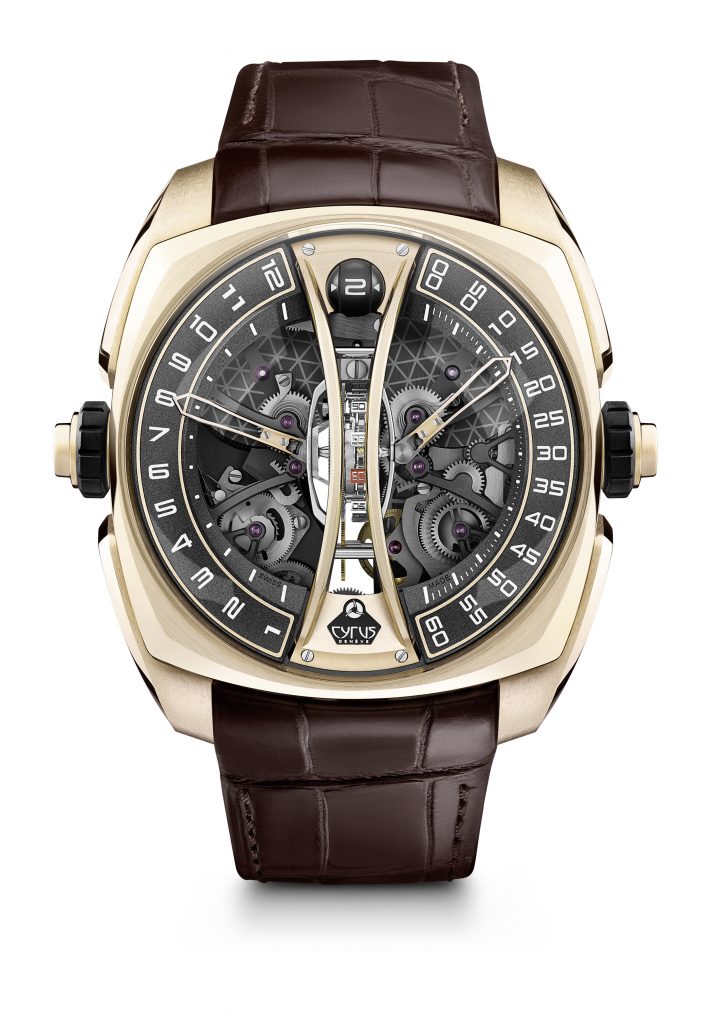 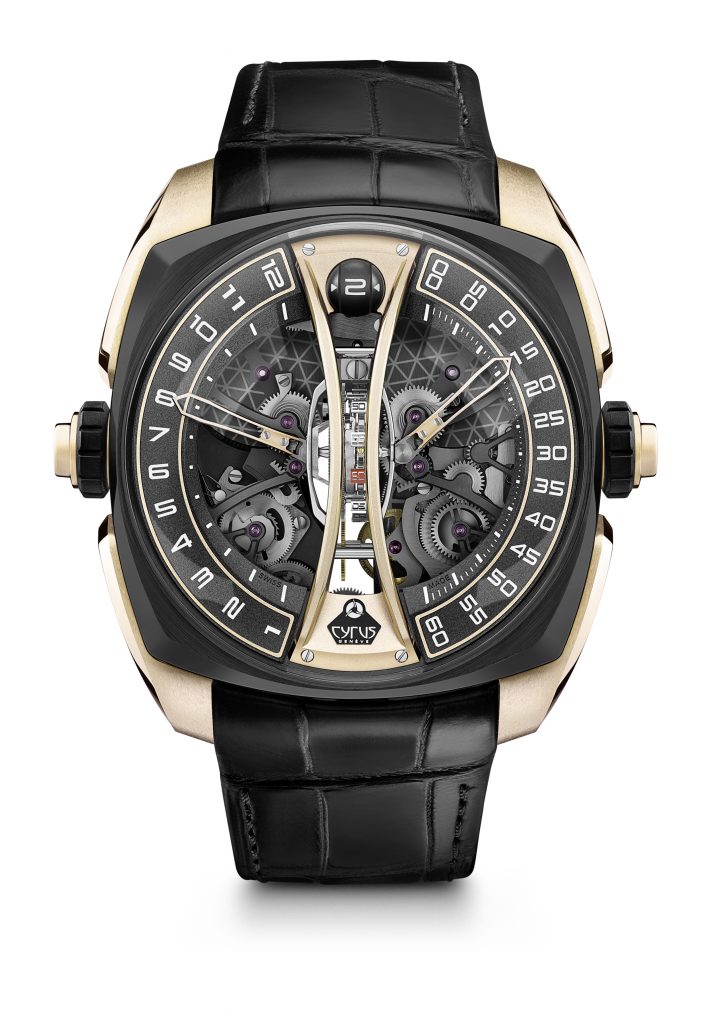 I think these new watches could well be contenders for the title of ‘coolest watch of 2019 so far from an independent’. It’s a bit of a long title, sure, but there’s something special about a watch from a maker you’ve barely heard of and certainly never seen. When that watch is a vertical tourbillon with retrograde indications, it’s something else entirely. I hope Cyrus sees this; I’d like to talk finance. Here are the specs:

New redesigned case made up of 26 parts

Available in the following materials:

Bezel: titanium black DLC on the titanium and two-tone versions, and in 4N 18K rose gold on the gold version

Crown at 3 o’clock: in position 1, winds the movement; in position, 2 adjusts the time

Crown at 9 o’clock: hour increment by pushing the button

Sapphire crystal on dial: anti-reflective treatment on both sides, domed and tailor-made, thickness of 1.2 mm

Case back: transparent with anti-reflective sapphire crystal on one side, fastened with screws customised with the Cyrus logo

Skeleton dial showcasing the finely decorated elements of the movement placed in a symmetrical position:

– Two parallel barrels at the top (between 12 and 9 and between minutes 00 and 25), rhodium plated with engraved triangle motif

– The cams are mirror-polished

Central tourbillon enhanced by a three-dimensional bridge comprising two brass arches with a gold “microbillé” finish, or black DLC treatment, depending on the version, with bevelled, polished edges

Retrograde hour arch to the left with Arabic numerals and white indices, with edging variants as per the minute arch

Number of parts of the complete movement: 344

Number of parts of the tourbillon cage: 52

Central tourbillon on vertical axis at a 90° angle

Clasp customised with the Cyrus logo

Limited to 5 examples of each case type.