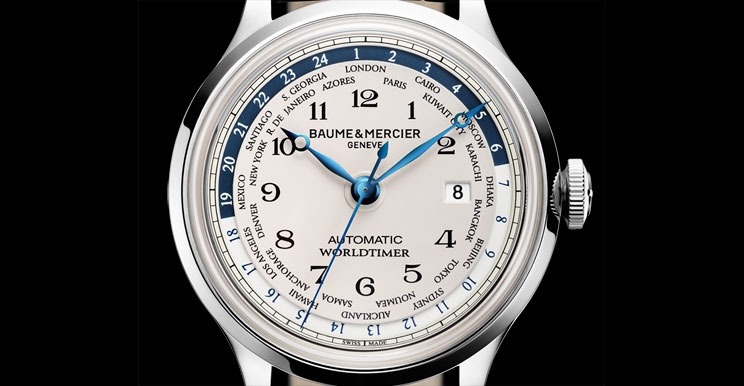 Travel has been at the heart of the house philosophy from the very first years of the Frères Baume timepiece trading post, founded 183 years ago by Louis-Victor and Célestin Baume. These visionary, well-informed businessmen intuited the importance of conquering new markets outside Europe. This world-encompassing approach is undeniably part of the Baume & Mercier heritage, and has given rise to this latest creation, the Capeland Worldtimer. 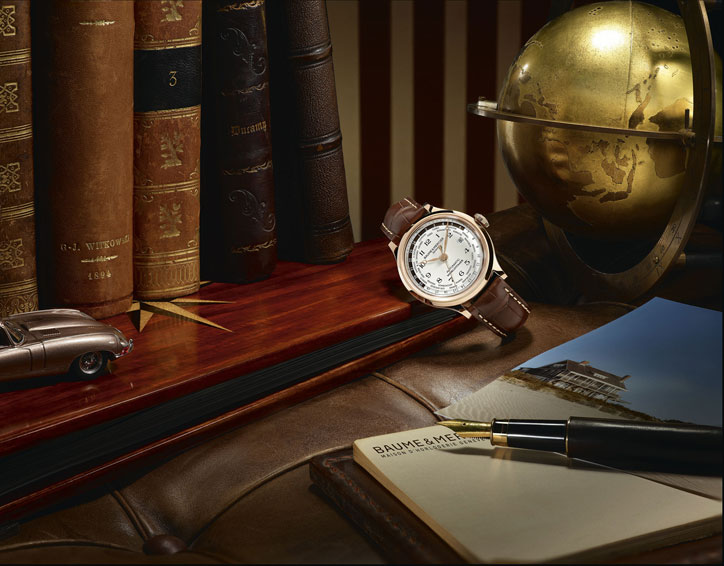 Aware that the bounds of the universe were far beyond the valleys of their native Jura, the Baume brothers established a branch in London in 1851. Then, under the name « Baume Brothers, » they expanded their business to the entire British Empire, opening a subsidiary in Philadelphia in 1876 and creating a vast sales network stretching from India to Africa, including Australia and New Zealand, Singapore and Burma. 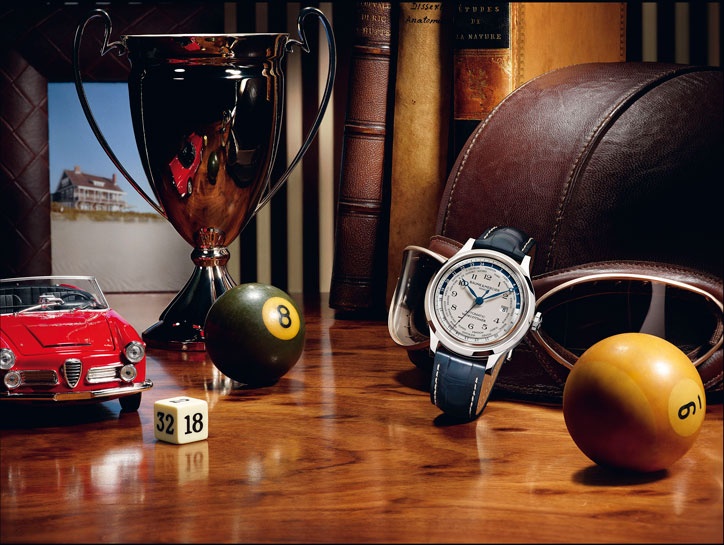 Today, to honor this rich past and passion for travel, Baume & Mercier presents the Capeland Worldtimer. Globe-trotters and international businessmen will appreciate reading – at a glance – the time in the 24 cities chosen to represent the times zones of the world, thanks to the exquisite complication within the watch. To know what time it is in Beijing or at home upon arriving in Rio de Janeiro has never been so easy!

The signature pebble-shaped watch case offers a fully identifiable vintage design. The 44 mm model is available in 18K red gold or polished satin-brushed steel with a restrained but easy-to-read dial in ashen gray or off-white, with a subtle tone-on-tone refinement. 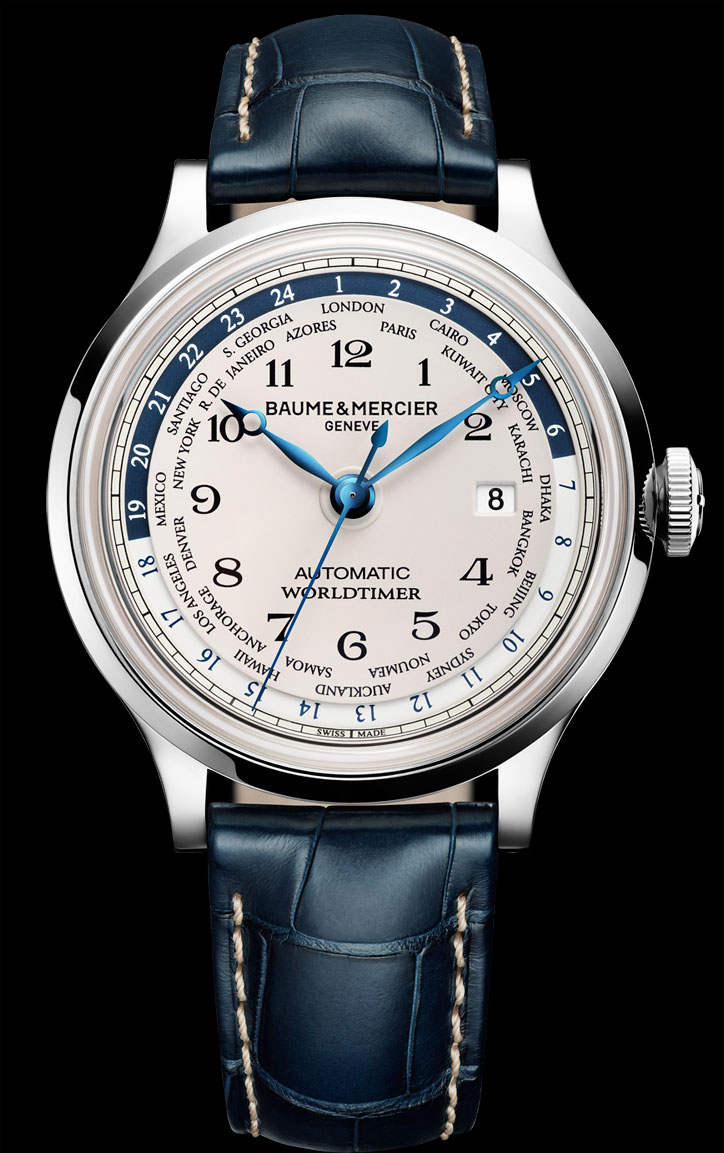 This model’s self-winding mechanical movement can be seen through its sapphire case back. It is surprisingly easy to use.
To display the local time, just select the name of the city corresponding to the time zone where you are, and turn the 24-hour ring until the digit representing the current time is facing it. With the crown in the suitable position, simply adjust the hands. Once these quick adjustments are made and the crown is in place, it is easy to see what time it is all over the world with a simple glance at the Capeland Worldtimer. 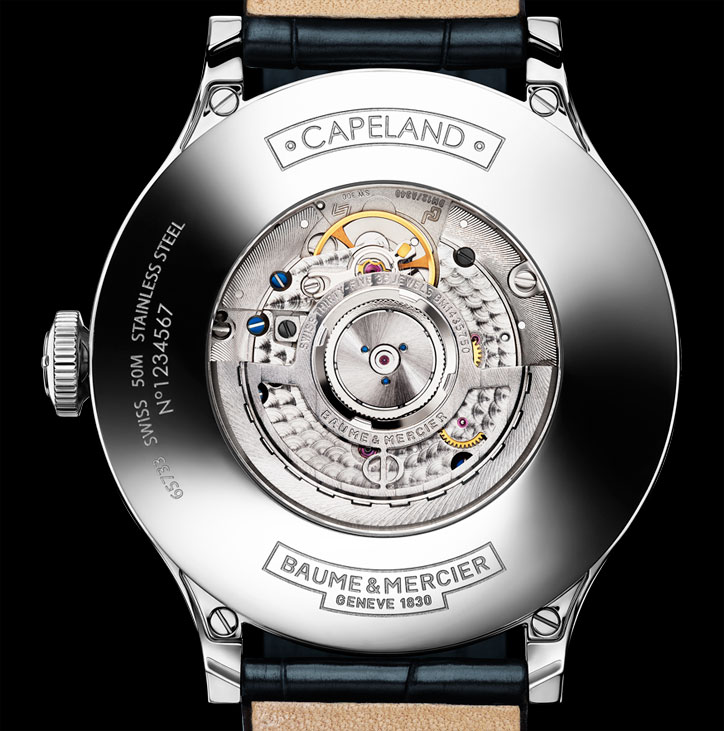 The concept of splicing the world into twenty-four time zones, each covering 15° of longitude, was ratified during the Washington conference of 1884. With the expansion of such rapid means of transport as train travel in the second half of the 19th century, the concept had become a necessity. Today, the vast majority of the world’s countries have adopted this method, facilitating commercial exchanges through the decades. However, because of particularisms such as national borders, time zones have taken on a very irregular appearance on a map. A simple way to situate them is to associate them with universally recognized world capitals. 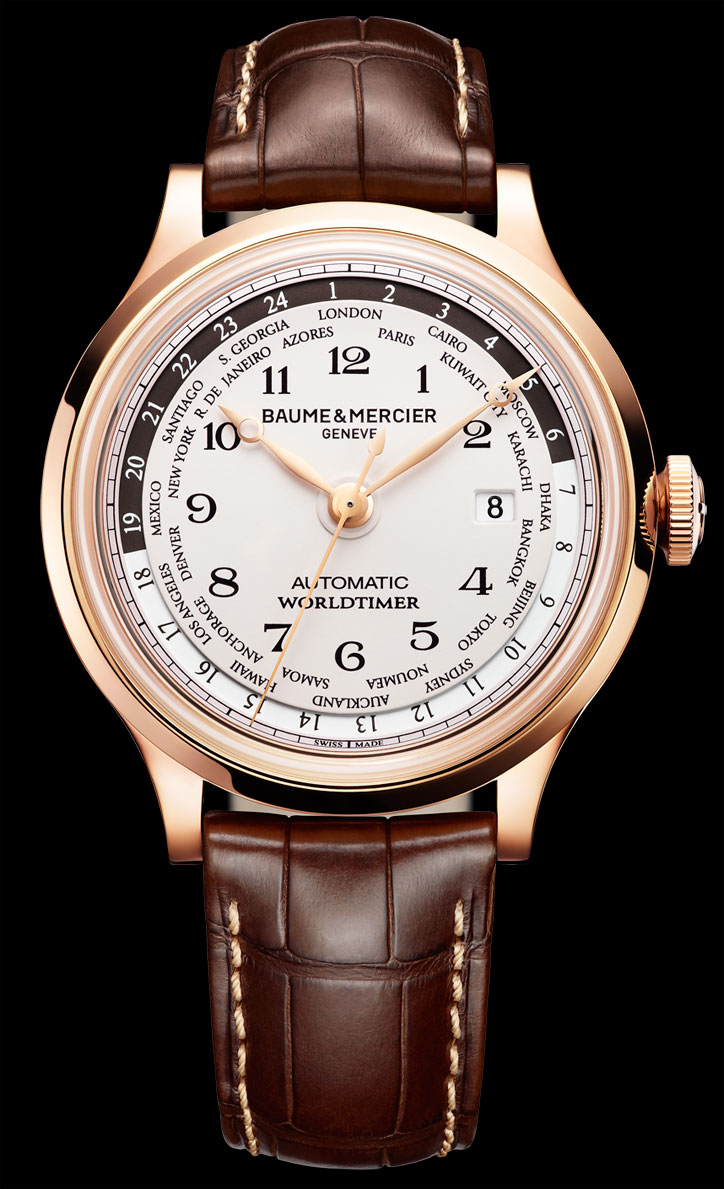 The new 44 mm Capeland Worldtimer in 18K red gold, of an exceptional timelessness, will appeal to fine watch enthusiasts as it contains a self-winding mechanical movement renowned for its precision and endurance. The delicately manufactured movement, featuring premium fittings visible through the sapphire case back, displays the time simultaneously in the twenty-four time zones, and gives the date in an understated open counter at the three o’clock position. Practical and to-the-point, this fine timepiece is mounted on an elegant, understated brown alligator strap in the same tone as its 24-hour ring.

This satin-brushed steel watch with its subtly timeless shape is presented in the very contemporary 44 mm dial diameter. Its off-white dial makes it easy to read the local time, as well as the time in all twenty-four time zones of the world. This polished piece will delight craftsmanship connoisseurs, who will appreciate the superb mechanism of this self-winding caliber, visible through the sapphire case back; the quality of the blue alligator strap, in a shade matching the 24-hour ring of the watch; and the simplicity of the adjustment, making the world’s time zones visible at a glance.