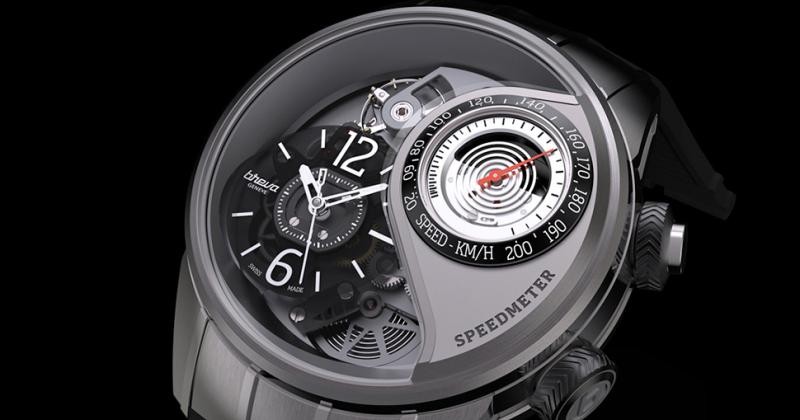 Breva Génie 03 – Practicality Aside, A Brilliant Design For A Miniature Anemometer In A Wristwatch

When it comes to creating a purposeful and visual piece of horological machinery, the Breva team is one of the best currently out there.

Since their previous examples, the 01 and 02, the Breva team has conceived interesting or should I say unique mechanical complications to fit into a wristwatch. For this latest out output under the Génie series, the complication of choice is a wind speed measurement devise. 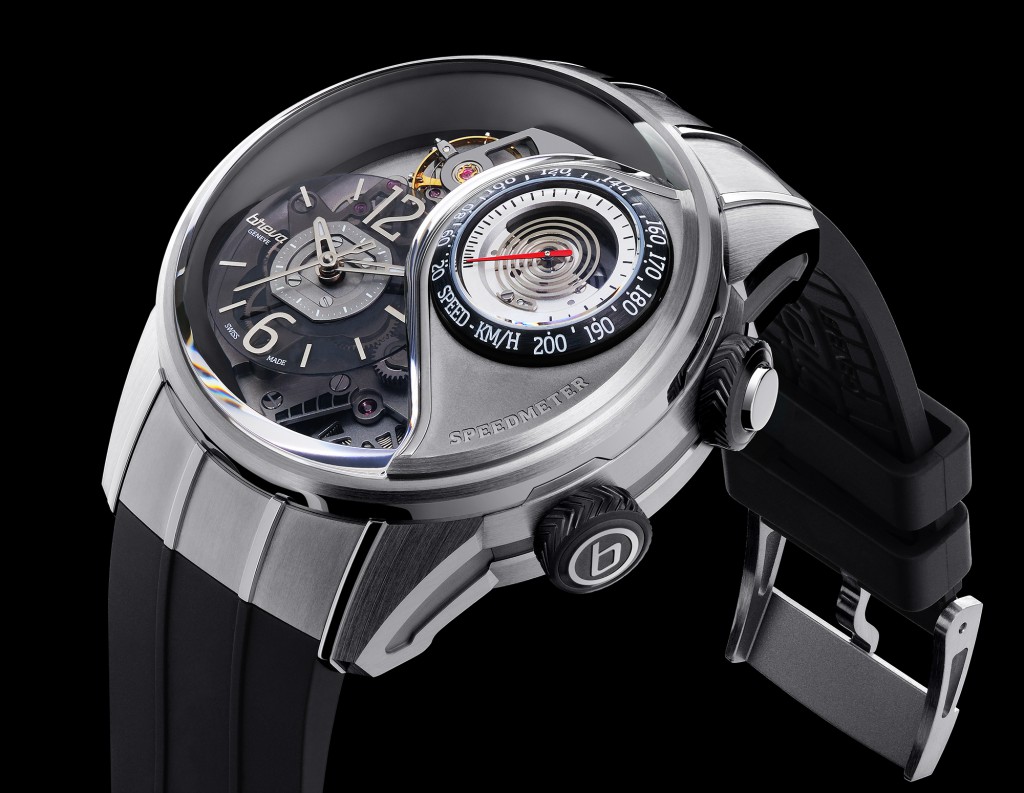 These are some interesting facts about the watch.

First, the mechanical speedometer that measures wind speed, functions independently from the timekeeping mechanism. This special mechanism is patented by Breva.

Second, the engine that moves the watch function on this watch is a new movement, the caliber BRE03.000, Breva’s first in-house designed and manufactured movement. Interestingly, this caliber has been designed to be installed upside down, exposing the balance wheel, escape wheel and mainspring barrel via the transparent dial.

Third and final interesting fact is the price. This is by far the cheapest of the Génie series despite the mechanical intricacy of the watch design. Even at a suggested retail price of 48,000 Swiss Francs, it is still not a bargain from my point of view.

The watch is fairly sizeable. It has a diameter of 44.7 mm (excluding the crowns) and a height of 15.7 mm (with the speedmeter mechanism secured). Despite the size, with curved lugs with a lug width approximately 23 mm, the watch should be able to sit comfortable on the wrist without any lug overhang. Although I have not gotten the chance yet to inspect the watch in person, other watches that I have come in contact with similar size and lug design such as the Omega Ploprof and Seiko Emperor Tuna suggest that the 03 would also offer a similar wrist experience. Moreover, the use of titanium G5 watch the casing provided the necessary lightness to make the size more bearable.

Both the front and back are covered by sapphire crystals with anti-reflective coating. The watch has a water resistant rating of 30 m (100 ft). Even with the Speedmeter mechanism deployed, it is dust resistant. The strap is rubber with a titanium buckle.

Although the water resistant rating is only 30 m, the watch comes with screw down crowns at the 2- and 4 o’clock positions. The crown at 4 o’clock engages the time while the crown at 2 o’clock has the release button for the speedmeter mechanism. 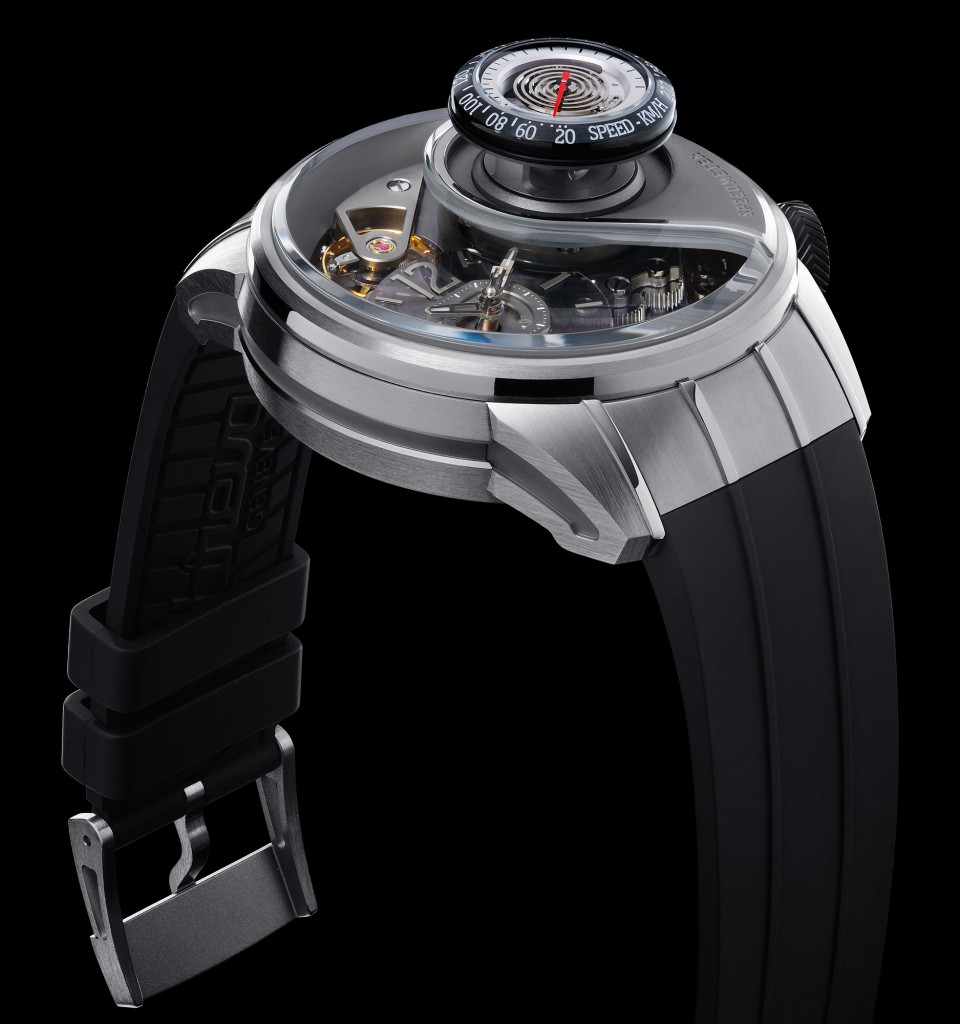 When this button is pressed, the speedmeter mechanism raises up 6 mm from the dial, exposing three titanium-alloy Robinson cups. These cups catch the wind and give a velocity reading. So as not allow the miniature anemometer to spin out of control, when wind speed reaches 50 kph, the cups disengaged. Instantaneously, the cups start working against a spring, allowing the device to keep on measuring between 20 and 200 km/h without actually spinning. One just needs to read the wind speed directly on the scale provided on the speedmeter.

From a practical point of view, the small miniature anemometer is just a curiosity piece. I doubt it any storm chasers will find this watch any useful in their work. Let’s face it, would you want to put a 48,000 Swiss Francs watch in harm’s way?

Under the Beaufort Scales (international Wind Speed Rating), at 20 km/h, it is classified as a Force 6 or Strong Breeze category. At this rating, if taking measurement at sea, it is defined as large waves (3 m), probably some spray. If the measurement is on land, it is defined as large branches move, wires whistle, umbrellas are difficult to control. As the wind increases in speed, the conditions worsen exponentially.

The ability of the seals on the watch to withstand small particles or water is something that I would like to see being tested. What I have seen from YouTube and other reviewers was the use of compressed air canisters to test the effectiveness. Unfortunately, compressed air canisters consist of dry air. Hence, it could not stress the mechanism at a level as natural air with moisture and particulates would.

Call me a skeptic but I need proof.

Having said all that, putting aside practicality, I will still give this watch thumbs up for a brilliant design of setting a miniature anemometer in a wristwatch. For more info, please visit breva-watch.com