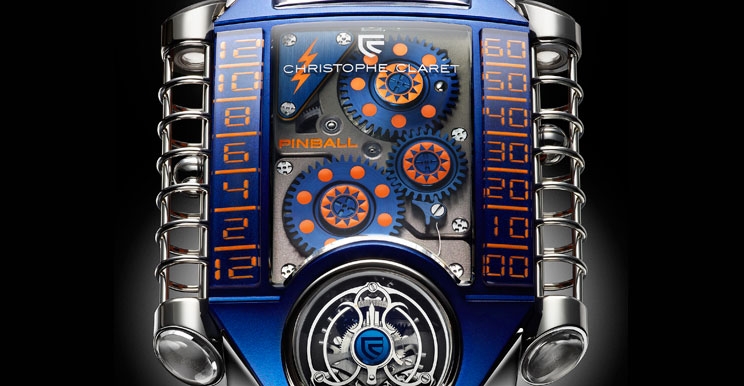 A unique piece for Only Watch 2013
Christophe Claret is on the ball!

To mark the fifth Only Watch charity auction, Christophe Claret presents X-TREM-1 Pinball, a unique timepiece designed to reflect that most precious of children’s activities: Play. Taking its inspiration from pinball machines, Pinball is a highly distinctive interpretation of Christophe Claret’s X-TREM-1 with its tiny metal balls indicating hours and minutes through new, grilled sapphire tubes. The Le Locle-based watchmaker has also reworked the appearance of the movement so it resembles the inside of a pinball machine: Bumpers, slingshots and balls are all evoked inside the highly visible mechanism. Even the cool blue and bright orange colours reflect the Pinball concept. The Manufacture is dedicating the X-TREM-1 Pinball to Only Watch 2013, the charity auction to benefit research into Duchenne muscular dystrophy, held in Monaco on September under the patronage of HSH Prince Albert II. 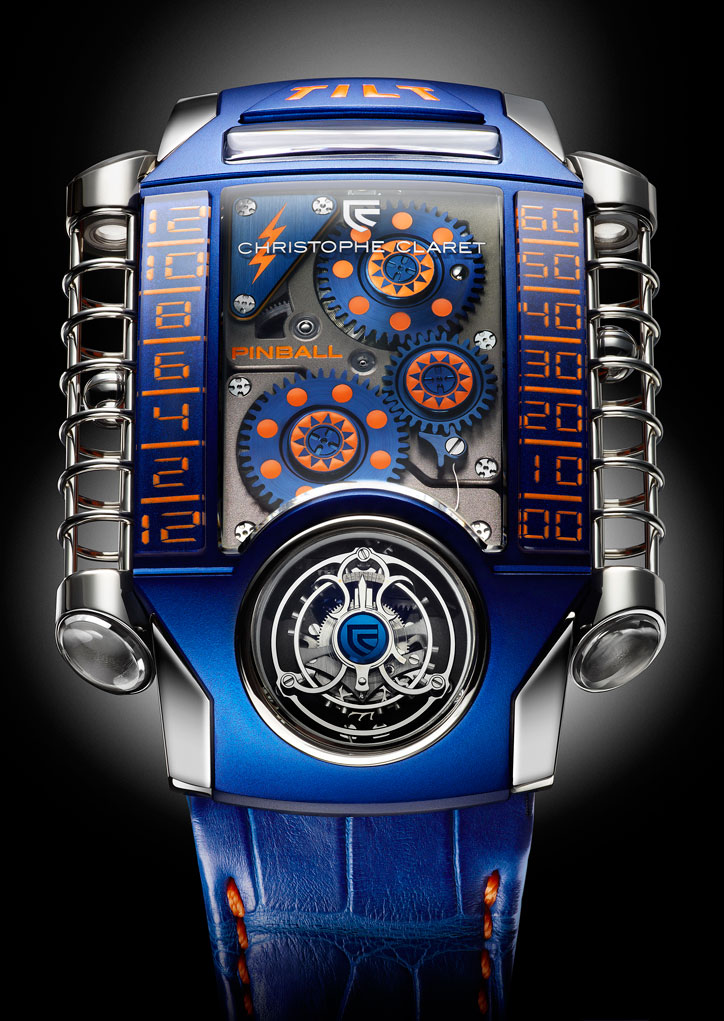 By auctioning this truly unique piece, which took several months to develop, Christophe Claret is paying tribute to both children suffering from myopathic disorders and to the Monaco Association against Duchenne Muscular Dystrophy (AMM) whose fundraising and research aims to help such children.

This is an exceptional watch for an exceptional event! Christophe Claret and all those who work at the Manufacture typically approach the creation of each piece as a collective challenge, to be realised through passion and perseverance, along with considerable emotion and vision. We are proud to have been able to extend this commitment to a truly great cause. We sincerely hope that our work will strike a chord with collectors and that the X-TREM-1 Pinball’s sale at auction will succeed in raising as much money as possible for the AMM.

The X-TREM-1 Pinball is the result of an exclusive concept of displaying the time unveiled by Christophe Claretin 2012.X-TREM stands for: 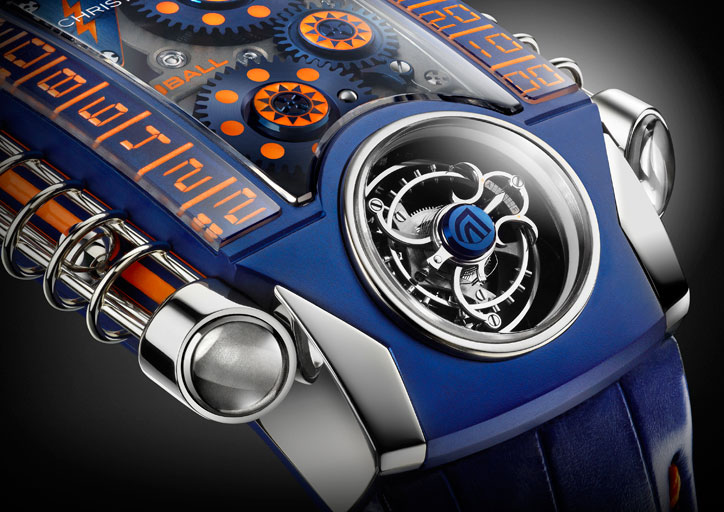 Each stage in the production of the X-TREM-1 Pinball represented a bold undertaking. High strength, ultra-light titanium was used for the three-dimensional curvex mainplate and the bridges, a world first for such a complex calibre. The flying tourbillon is equipped with double ceramic bearings to maximise reliability and is inclined at a 30-degree angle in order to make it even more clearly visible to the wearer. The bright blue with orange highlights in the dial blends harmoniously through to the strap.

The mechanisms in the dial are reminiscent of the playfield of a pinball machine. It comes to life when the watch is wound thanks to the small ball-like circles located on the two ratchet wheels. The ratchet wheels and the crown wheel have been transformed into pinball bumpers, while a pinball-style slingshot has been placed at 10 o’clock. The hand-wound movement is powered by two barrels, the first reserved for the tourbillon, the second for the mechanism powering the hours and minutes. The case is made from white gold with palladium and Perunal-type aluminium, a state-of-the-art material used especially in aviation. The deep blue colour was obtained through anodisation.

In another bold move, the hour and minute display uses a magnetic levitation system. Christophe Claret has succeeded in introducing a magnetic field – the sworn enemy of watchmaking mechanics – into the very heart of the watch. The system comprises two tiny steel spheres (hollowed out to reduce their weight), which move inside two small mesh tubes (base in white gold, mesh in stainless steel), and mounted on the right and left of the case. These balls are invisibly pulled by two miniature magnetised carriages, which in turn are pulled by “cables”. The cables are incredibly strong and flexible, made from hundreds of Dyneema nanofibres all contained within an ultra-high-strength polyethylene gel. Thinner than a human hair (4 hundredths of a mm in diameter), these cables are capable of withstanding tensile forces of up to a kilo.

The spheres, which levitate inside the tubes, have no mechanical connection with the movement. This only serves to enhance the sense of magic. This patented technology was developed in partnership with the School of Business and Engineering Vaud (HEIG-VD), in Yverdon-les-Bains, Switzerland. The magnetic fields have been focused so that they have no effect whatsoever on the movement apart from the task assigned to them. 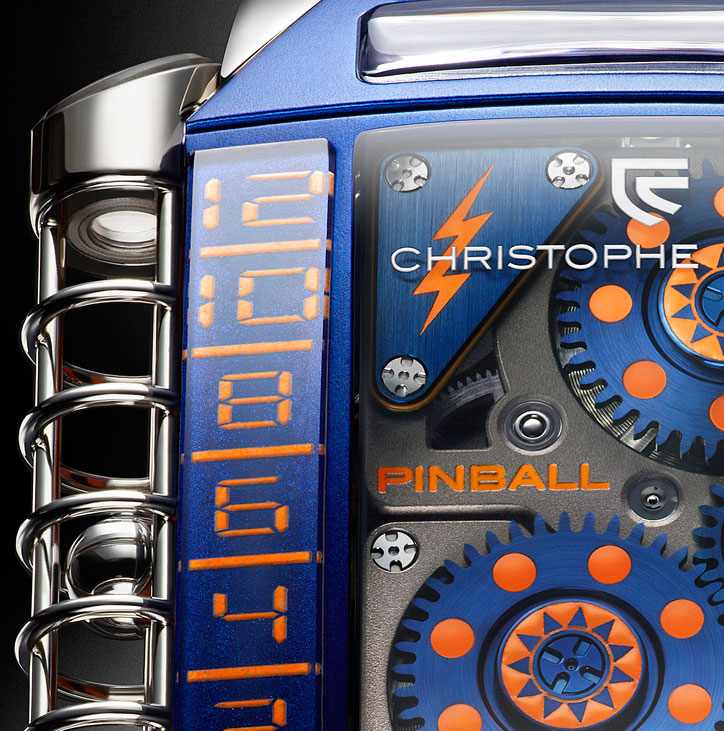 Particularly worthy of note is the finishing of this timepiece, which also meets the extreme demands of the Claret Manufacture. X-TREM-1 Pinball has been given sophisticated custom touches to evoke the colourful world of pinball machines. Christophe Claret has taken great inspiration from this game, particularly in terms of its interactive and mechanical aspects. This playful watch serves as evidence that the watchmaker has never lost his childlike joie de vivre.

On the dial side, three ratchet wheels and a bridge reminiscent of those found on old electromechanical consoles can be seen through the sapphire crystal. Set off perfectly against a blue background, the three-dimensional orange decorations match the numerals on the graduated hour and minute scales, as well as the stitching on the strap. The push-piece used for rapid time correction, positioned at the top, is inscribed with the word TILT, another nod to pinball machines.

For all its cutting-edge horological sophistication, X-TREM-1 Pinball is still a watch designed to inspire the heart and soul. And therein lies its common bond with the Monaco Association against Duchenne Muscular Dystrophy.

Unique piece for the 2013 Only Watch auction

Display regulation escapement:
The tourbillon movement and the time indication gear trains each have their own independent energy supply to optimise the power reserve

Tourbillon rotates once every 60 seconds

Seconds displayed on the tourbillon cage
Open barrel acts as movement state-of-wind indicator: when the movement is fully wound the spring is centred in the barrel

Distinctive features:
– Use of magnetic fields in a mechanical movement
– No mechanical connection between the display and the movement
– Fine adjustment system for the retrograde display return-spring

Hour and minute displays:
Hours and minutes are indicated by two 4mm-diameter hollowed spheres weighing 0.100 grams that move past sapphire scales marked with thin orange Super-LumiNova graduations beneath the sapphire

Pusher: Fast time adjustment is via an integrated pusher on the middle at 12 o’clock

Bows: Winding and time-setting via rotating “bows” that fold under caseback