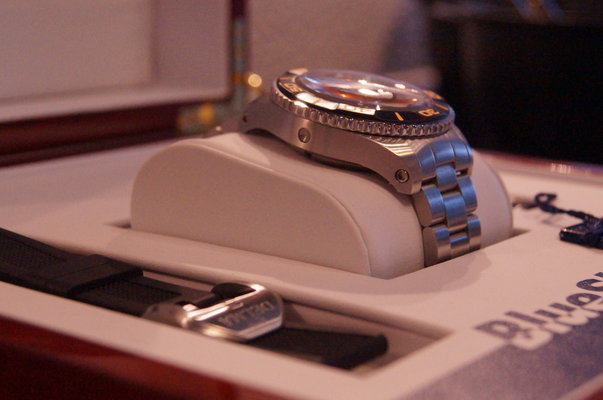 “Delma has relaunched a heavyweight of a very special type: the Santiago Blue Shark Limited Edition diver’s watch. In the 1980s, Delma Watch Ltd. brought out a line of diver’s watches in Florida, which belong to the company’s classic models to this day. The latest model will seduce even professional divers with its view into the depths.”

I usually don’t mention the watch boxes in my reviews because I don’t wear them on my wrist. But this is by far the biggest box I have seen for a watch.  It comes in an exclusive mahogany wooden box.  I had expected it to come in a waterproof box or something.

The Blue Shark at first look has a lot of the same details that a diver should.  As you look closer you can see they have massaged the design down to something that is their own take on a diver while keeping everything you expect. 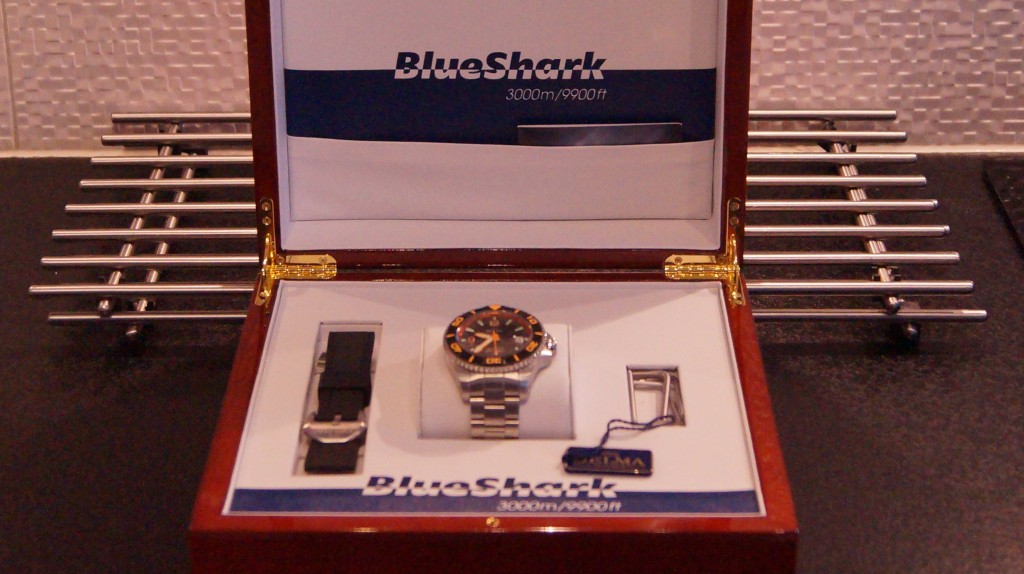 The Santiago Blue Shark has a 47 mm wide case and a height of 18.5 mm is the overall dominating feature of this watch.  It’s hefty, tall and sharp.   The stainless steel case is comfortable for a rugged watch.  It feels also very sturdy and well manufactured.  Looking at the watch from the side, you can see that most of the height comes from the bezel and mid-case, as the case back is slightly thinner. 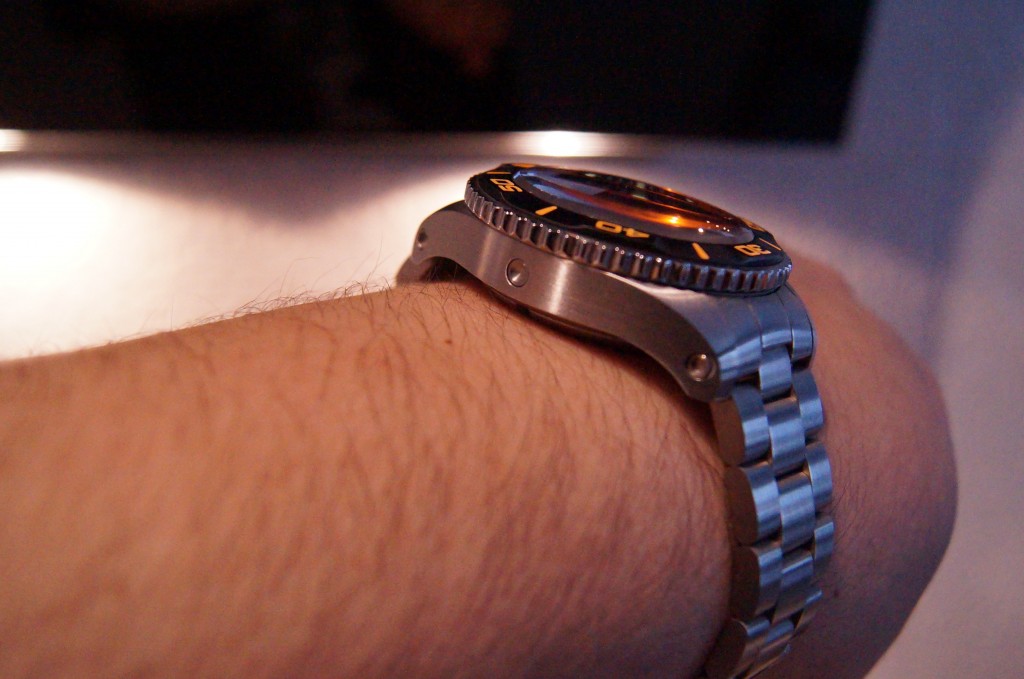 The whole surface, and case for that matter, has a clean satin brushed finished, which is very appealing and soft.  The case also features a helium release valve for prolonged deep dives. Coming off at 3 is a large, and polished screw down crown with Delma logo.  The case back of the Santiago Blue Shark is a solid steel screw down type.  In the center is an etching of a Blue Shark, and around it are some details about the watch. 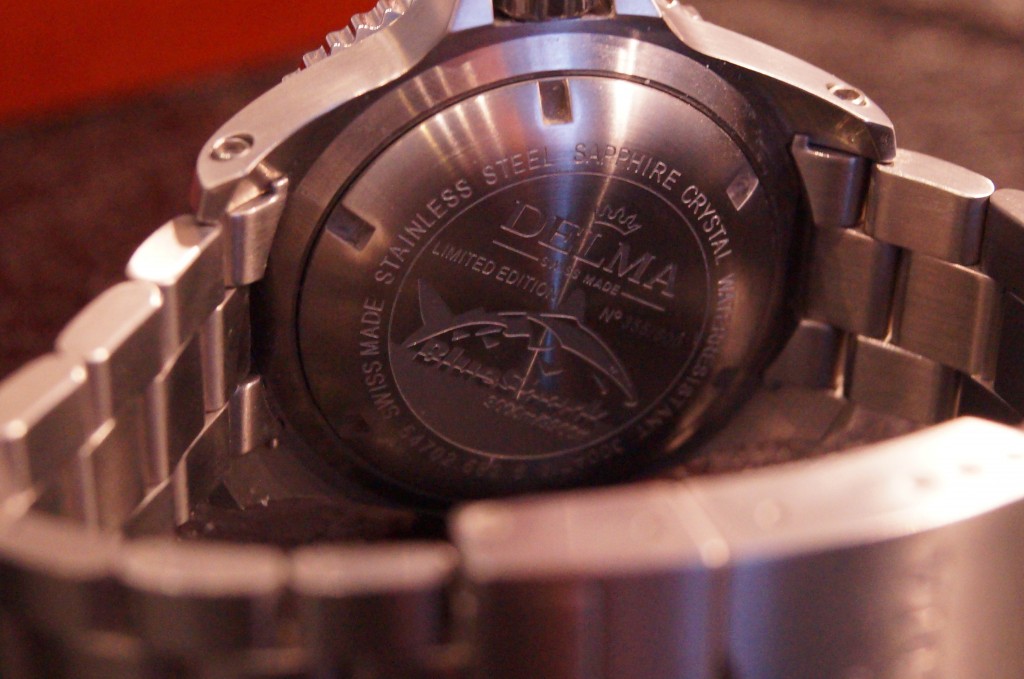 The black PVD bezel clicks very solid in one direction, and is thick making it easy to adjust.  The bezel insert of the Blue Shark features orange numerical minute markings at 10, 20, 30, 40 and 50 minutes, with hash markers at all other minutes and triangular marking at 12 position. Overall the entire case has a nice matte look throughout. 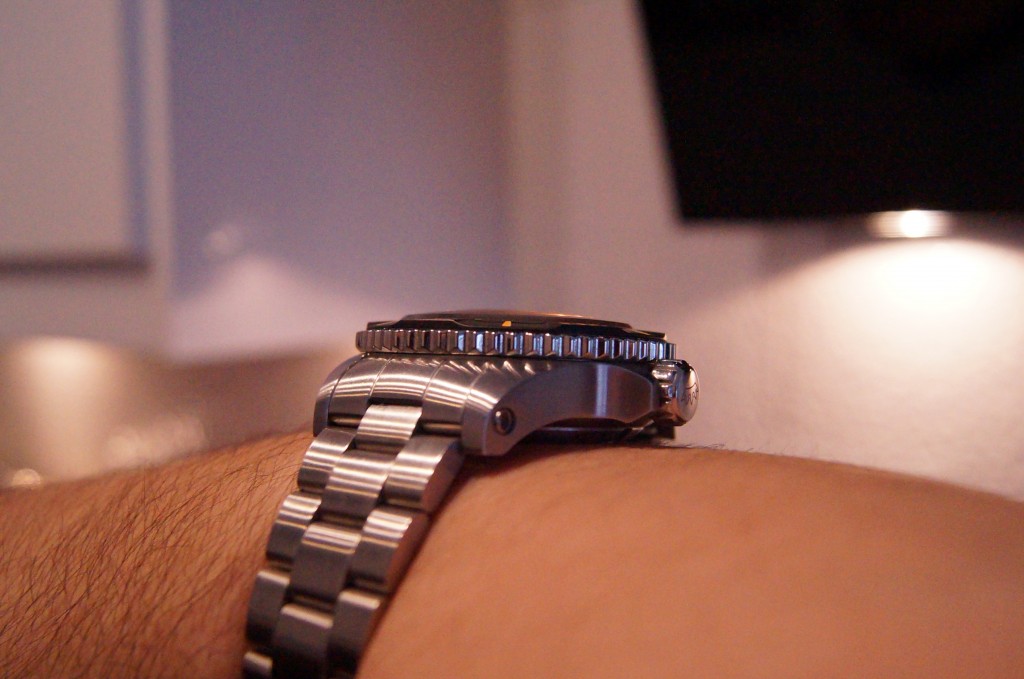 Sitting beneath a domed sapphire crystal with AR coating, the dial of the Santiago Blue Shark is designed with legibility in mind and incorporates a very nice textured finishing.  Orange Arabic numerals are placed at the 12, 9, and 6 o’clock positions, and thick hash markers fill in the gaps at the other hour positions. 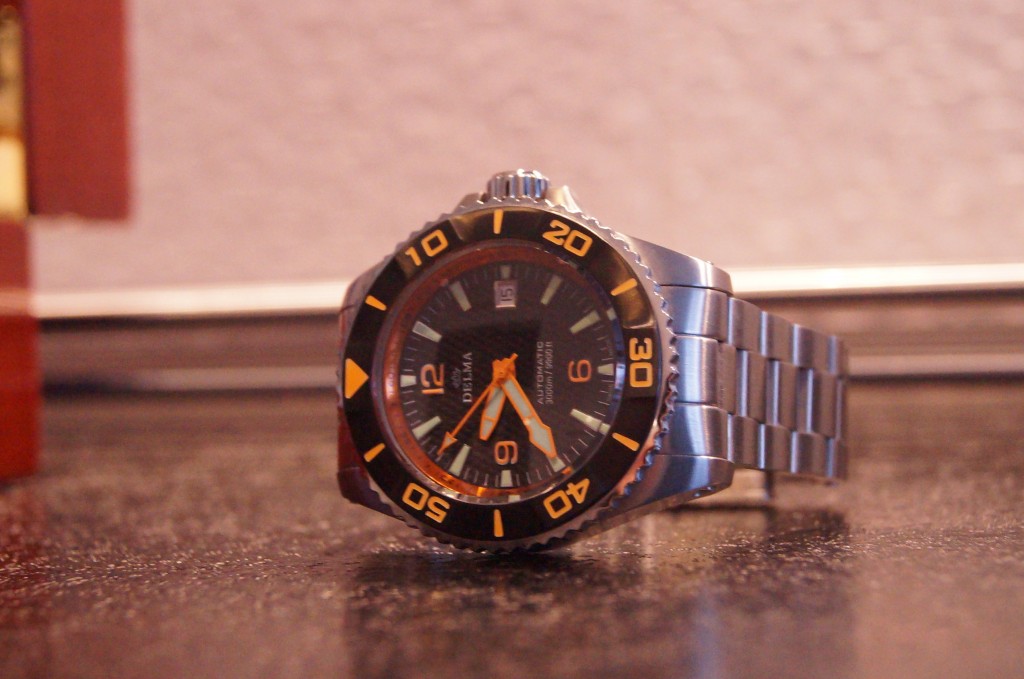 The second, minute and hour hands are all retro styled, and are white and orange, which goes very well with the rest of the orange on the watch.  There is also a date window at the 3 o’clock position, featuring black text on a white background. I almost forgot that the inner ring is in a monochromatic orange colour, which is a nice addition to the polished crown and bezel edge.  Otherwise, all that is printed is a Delma logo below twelve,  “Automatic, 3000m/9900ft” above six and “Swiss Made” below six. 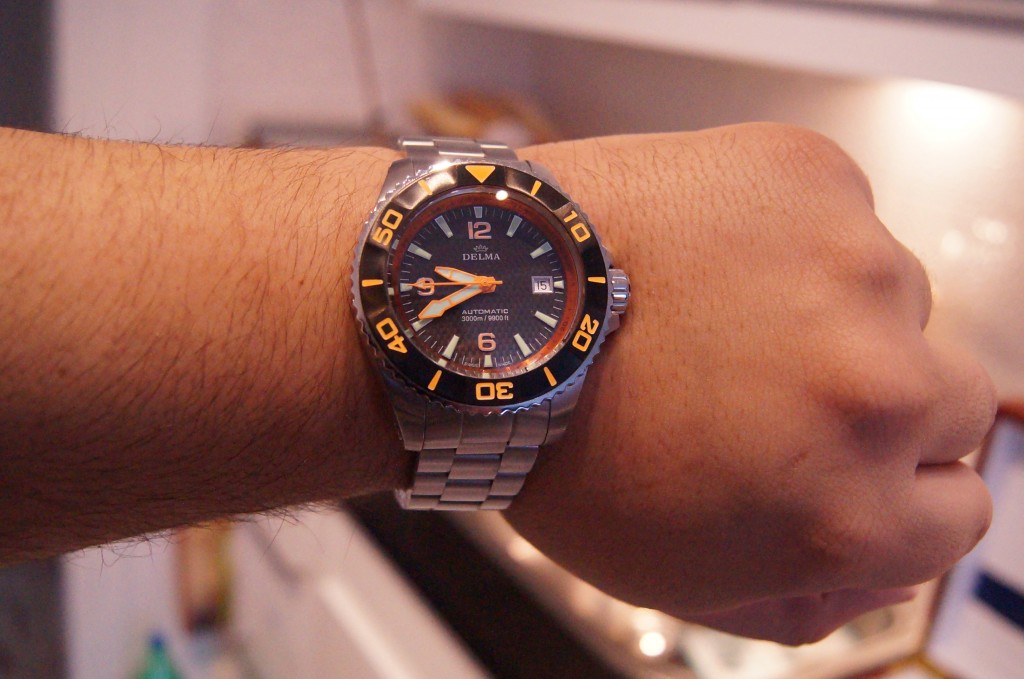 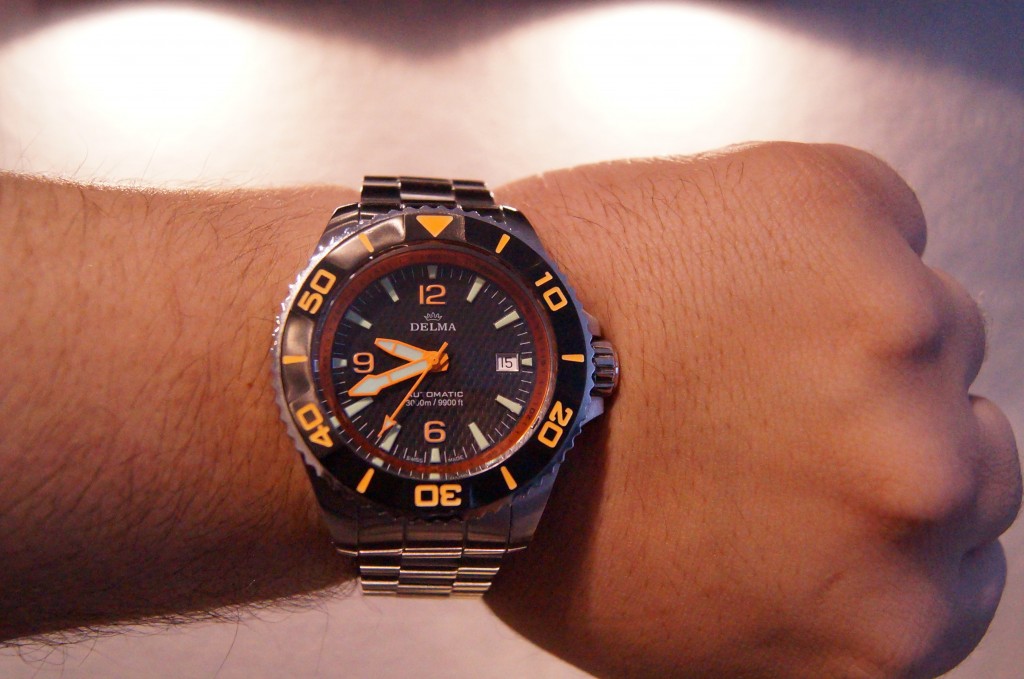 The Santiago Blue Shark is powered by the Swiss Made ETA 2824-2 Automatic. This 25-jewel movement features hacking, hand winding, date, 42 hours of power reserve and a frequency of 28,800 bph. This is a well-liked and reliable movement that we’ve seen several times before. The movement is well known to be accurate and a precise workhorse. And as stated before the watch is water resistant to a depth of 3000m/9900ft. 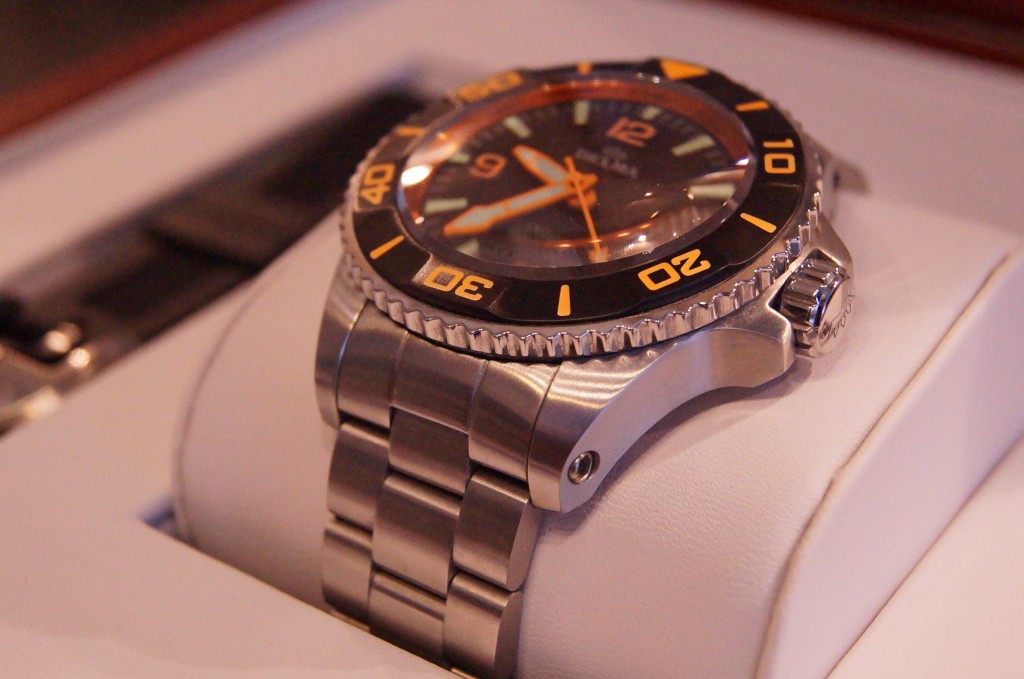 The Santiago Blue Shark comes with one metal bracelet, a rubber strap and one very handy allen/hex screw tool for unscrewing the watch lugs or adjust the length of the bracelet via removal of links.  It features solid links and endpieces that aren’t polished give it a nice, non-flashy look.  The bracelet on this watch is very understated which I appreciate. 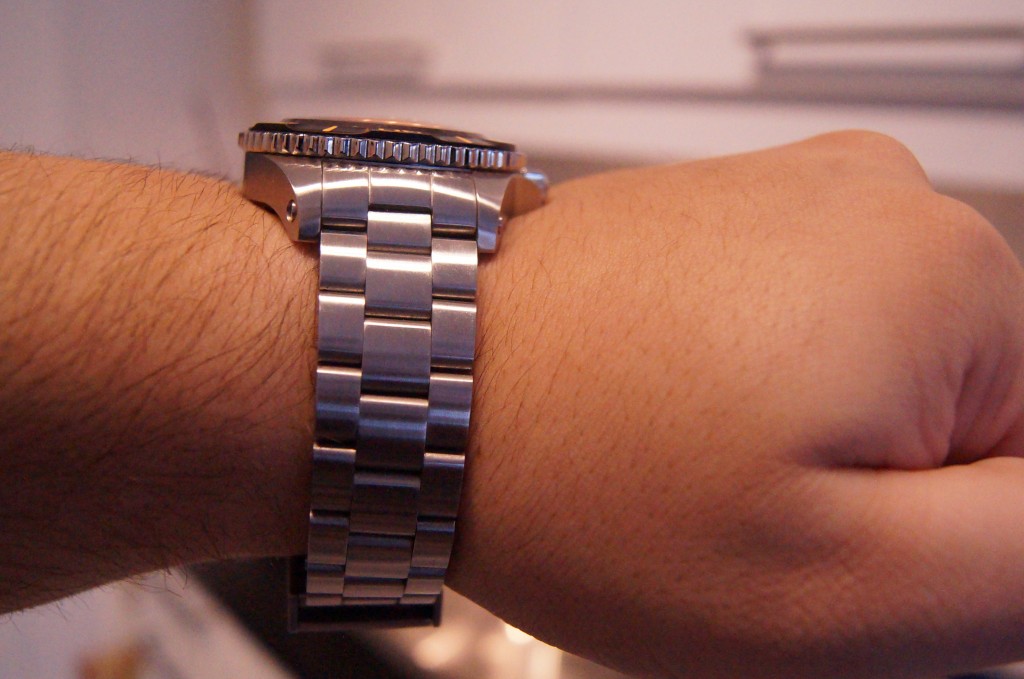 Being such a large portion of a watch I always expect a comfortable bracelet.  The Santiago Blue Shark has a traditionally designed diver bracelet that I expected to be average on the comfort scale. But I am very disappointed that the bracelet does not feature a diver-extension, as a real tool diver usually does. 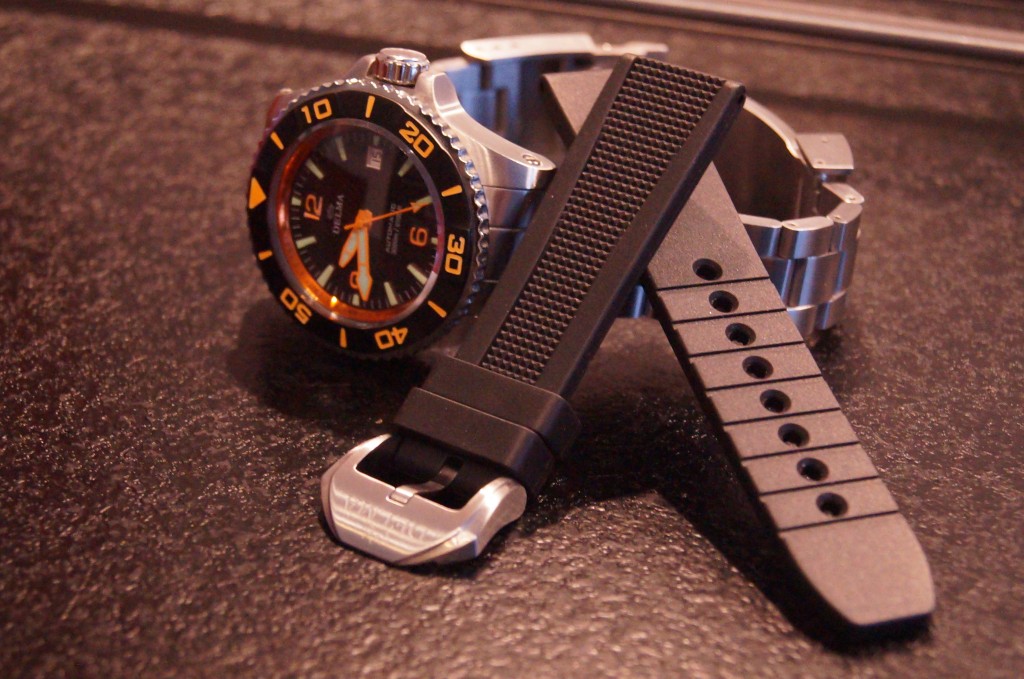 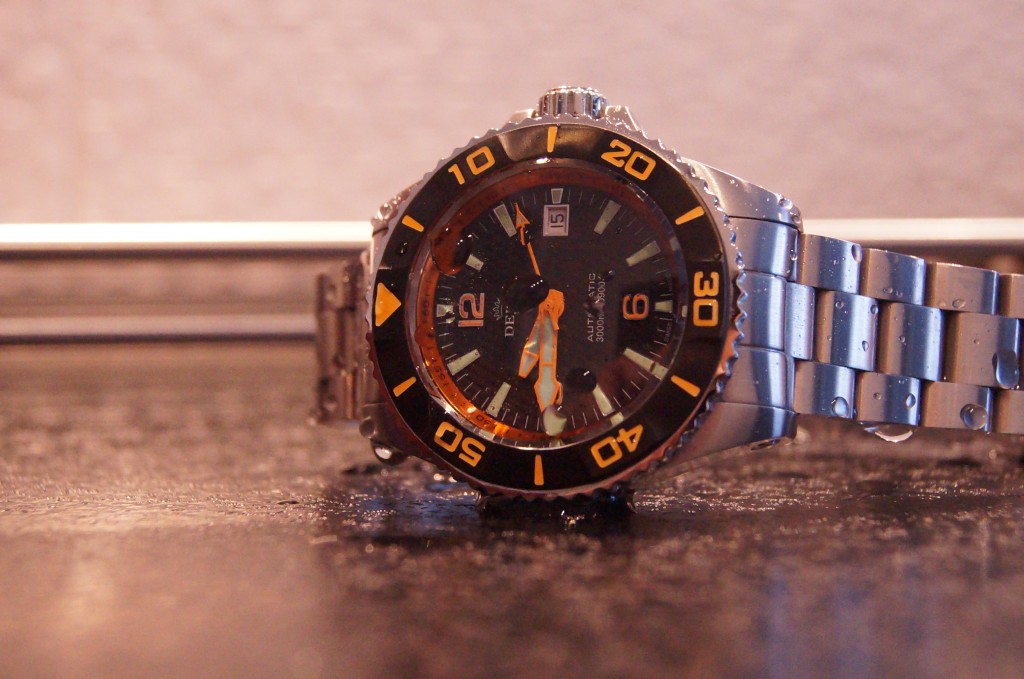 But what’s most important about the Santiago Blue Shark, isn’t really whether it reminds us of a shark, but rather how the design and aesthetic of the watch has been executed.  Its bulky look and feel make it a sturdy watch that can be used in extremes even if you are only heading to the office for the day.  If you want only one watch that can go pretty much anywhere with you, this is the one to choose.  The Delma Santiago Blue Shark is available in a limited production run of 500 pieces.  The PVD version comes for USD 2,300.  You can find more information on delma.ch

Watch collector, aficionado and an Event profile in the Swedish nightlife. He launched Watchgeek back in 2011, which is now known as WristReview and is one of the most widely read watch blogs on the Web. He quotes ’WristReview is a site to help people find, explore, discover and enjoy wristwatches.’  His passion for horology jump started in his early teens, when he was given his first mid-range wristwatch which was an Omega Seamaster. Since then he has always been in love with wristwatches! Besides WristReview, he also writes for a number of publications. P.S. He is also a huge fan of The Man of Steel/Superman. Read his articles here.