A Fortnight Review: 2 Weeks On The Wrist With The Graham Chronofighter Vintage GMT Watch

Graham 1695 is a Swiss brand with historic English heritage. The name comes from George Graham, a renowned English watchmaker from the 17th Century and the year comes from when Graham joined the Guild of Clockmakers in London. Graham died centuries ago but his name was reborn in the 1990s when Eric Loth bought the rights to the names of English watchmakers and launched Graham 1695 and Arnold & Son. Arnold & Son focuses on haute horology whilst Graham makes modern sports and pilots style watches with a unique twist. 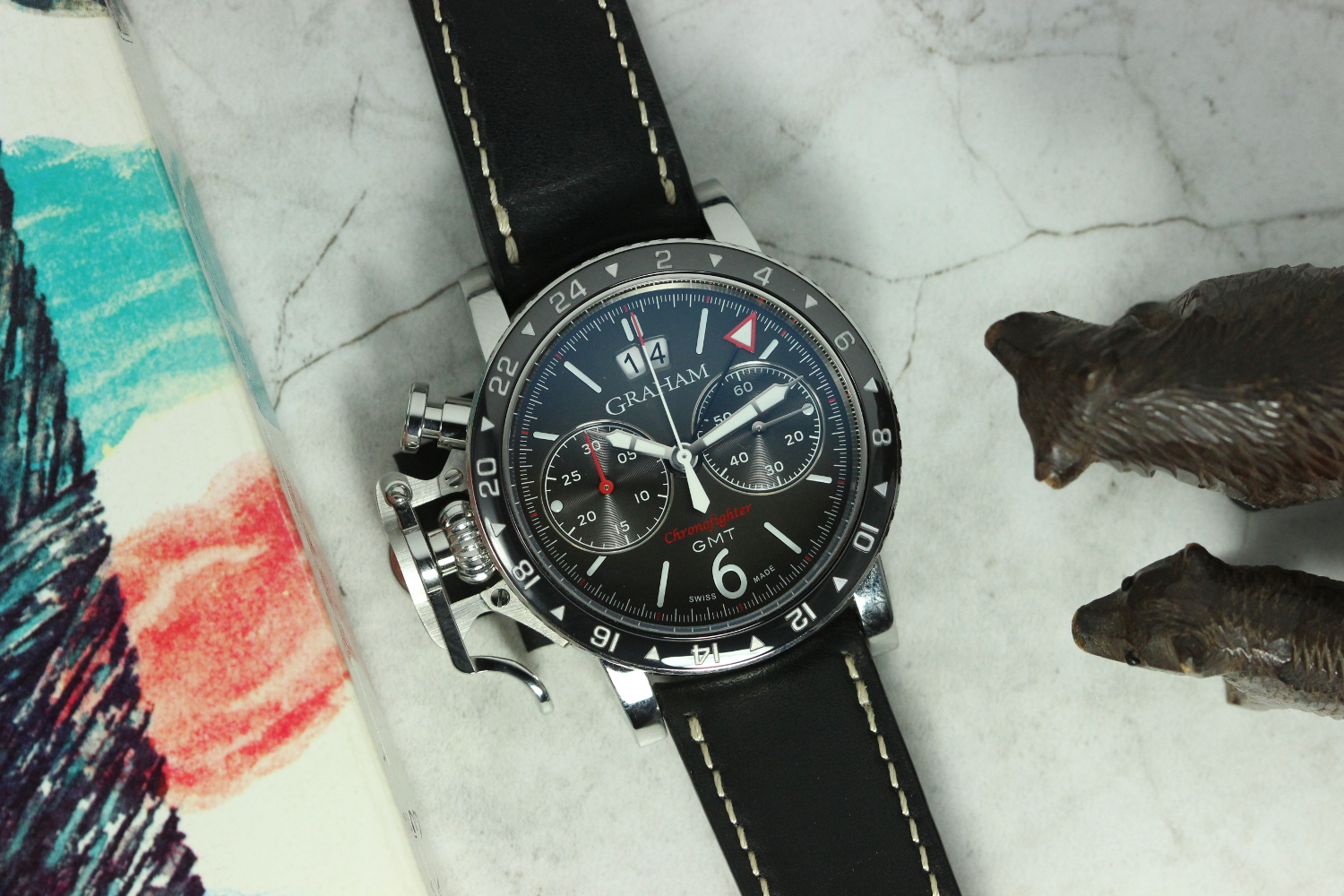 The Chronofighter range dominates Graham’s line-up and mostly consists of pilots/racing watches. In my opinion, there is nothing designed today that looks like the Chronofighter. I’ve seen left-handed watches and left-handed chronographs, but I’ve never seen a left-handed chronograph with a trigger activation. The layout is disconcerting when you first wear the watch, especially for me being a left handed who has forced himself to get used to right-handed watches. The trigger/crown guard adds several millimeters to the left hand side of the watch so my initial thoughts were that it would be quite ungainly on the wrist. Yet after a few days of wearing the Chronofighter, I was happily squeezing the trigger at every opportunity and hardly noticed the extra metal. 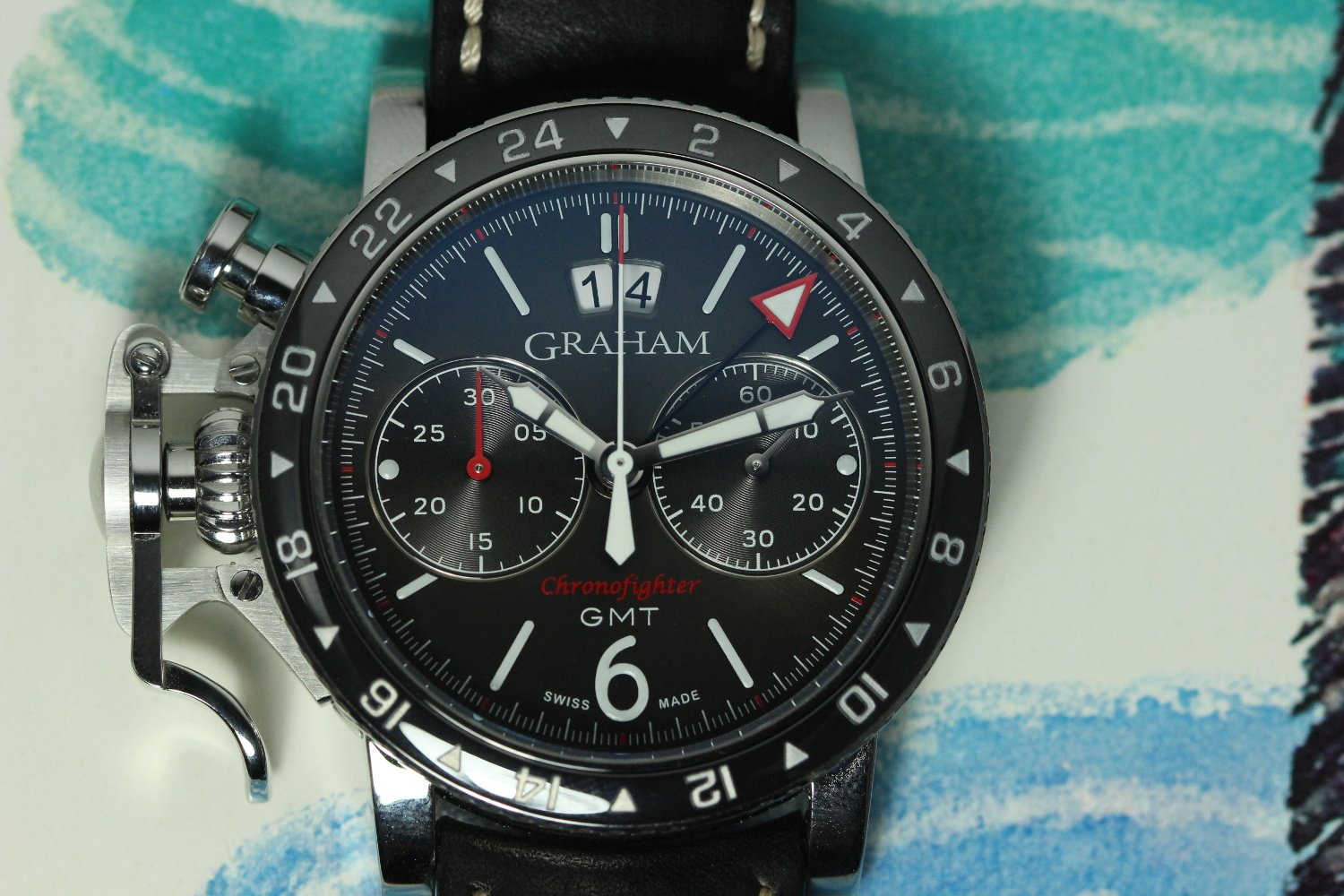 The layout of the Chronofighter chronograph is the inverse of a regular right-handed chronograph; the bottom pusher/trigger starts and stops the chronograph, with the top pusher resetting it. The trigger emphasizes this change in layout wonderfully and it felt very natural and comfortable to use the chronograph this way. As the trigger is so different in design from a standard pusher chronograph, I can understand why no-one uses it, but from a ergonomic perspective, it’s marvelous achievement. It is worth noting that as I’m a lefty wearing it on my right wrist, I don’t know how it would feel on the left wrist. As someone who has had to contort their wrist into weird shapes to activate a standard chronograph (whilst still being able to see the dial), the layout of the Graham was much appreciated. 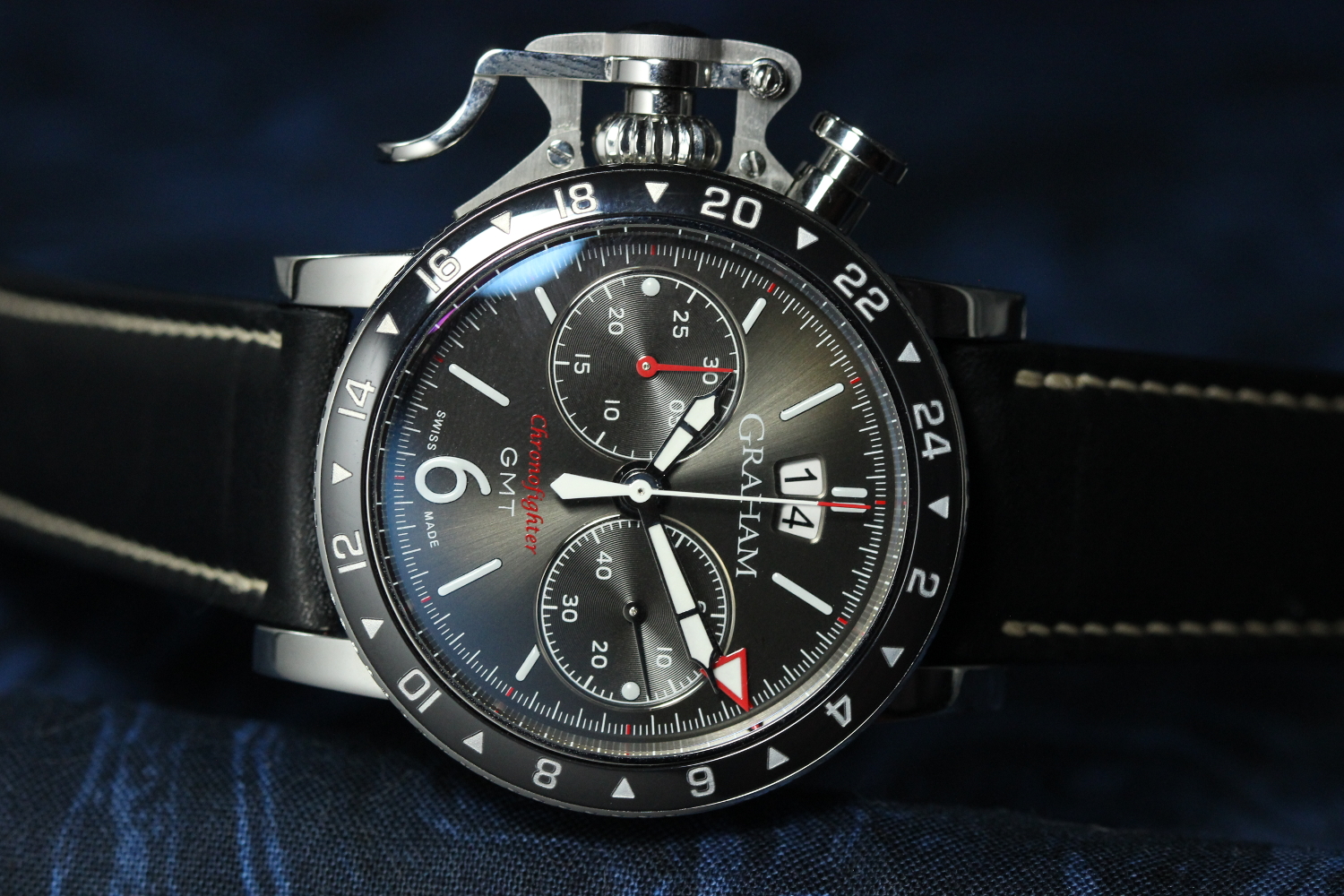 The one major downside to the crown guard/trigger design is that changing the crown positions can be a little tricky. The trigger and guard sit in the usual place where I would look to place my fingers and the bezel overlaps the case by a millimeter or so. Because of these decision choices, getting the tip of my finger behind the crown to set the hands was a struggle at times. The crown itself is large and has deep knurls, so once it has been pulled into position, winding and setting the time felt good. 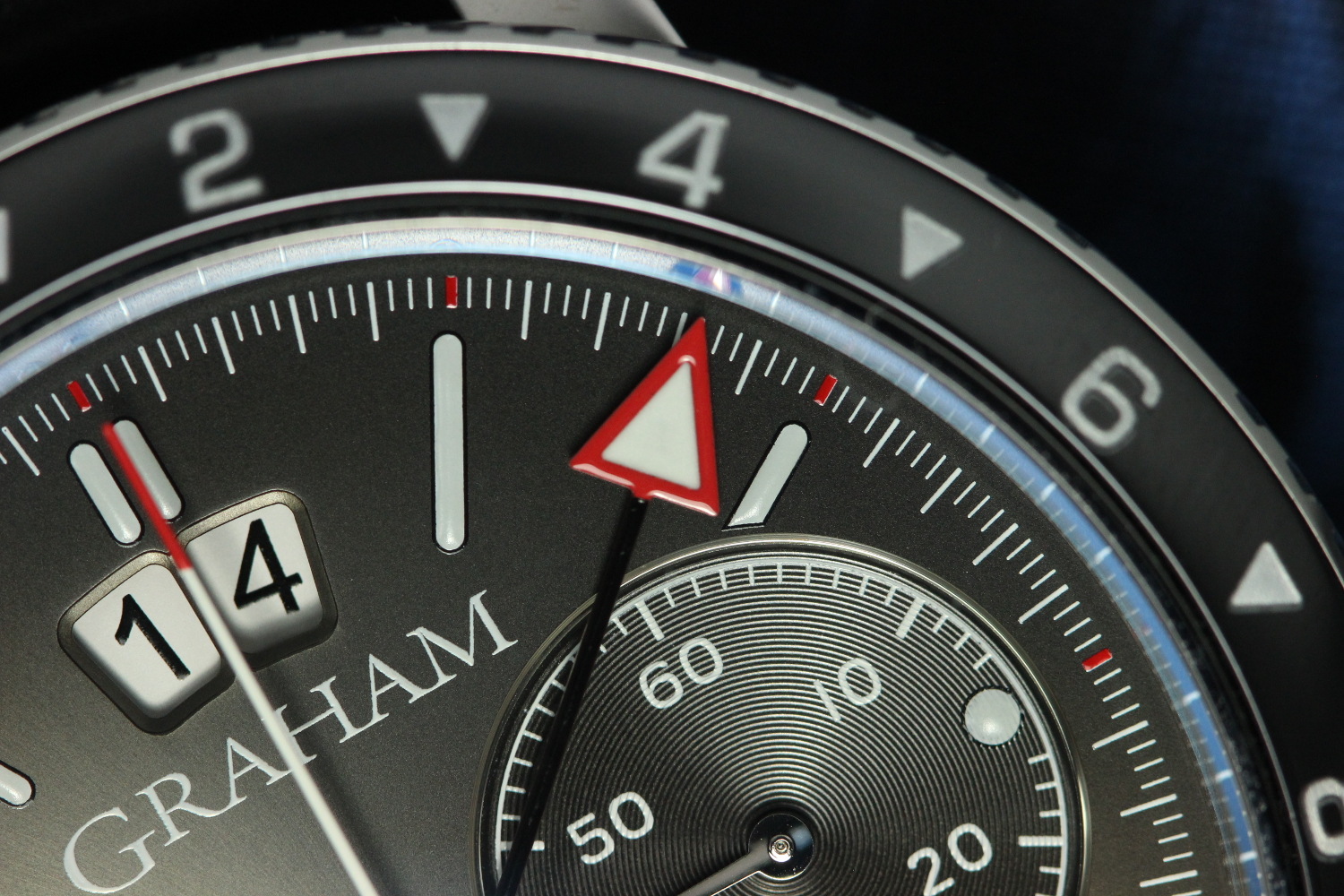 The GMT hand is large and obvious, two of the most important traits of that complication, and it pairs well with the black ceramic unidirectional bezel. The 24 click bezel is well designed and stands high up from the case so is easy to grip and turn. I really liked the slanted grooves that ran along its perimeter as whilst they add no functionality, they just look good. Sometimes looking good is enough. Like when setting the time on the hour and minute hands, the GMT hand is a little trick to set due to the overlapping bezel, but apart from that I had no problems with it during my time with the watch. 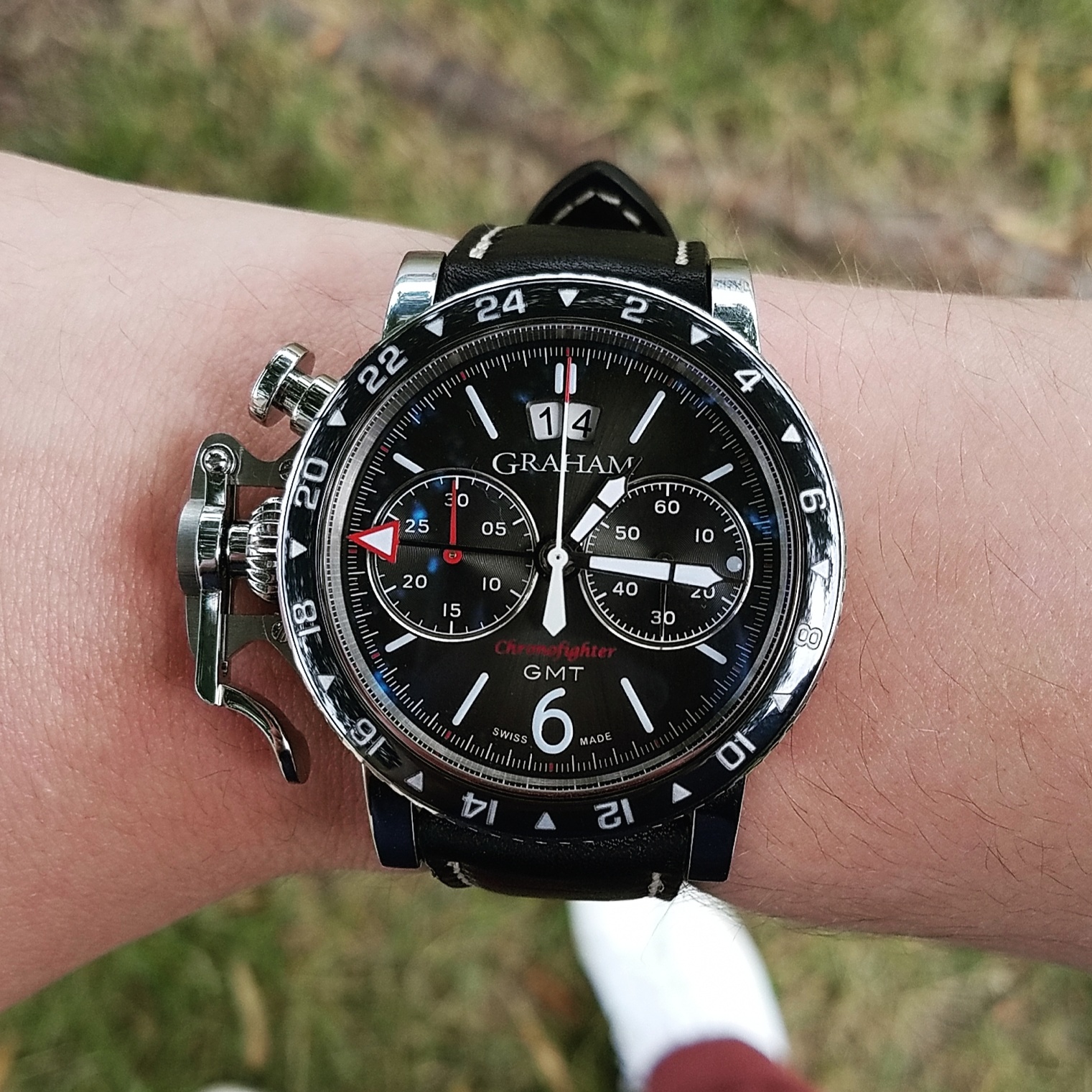 At 44mm, the Chronofighter is large. 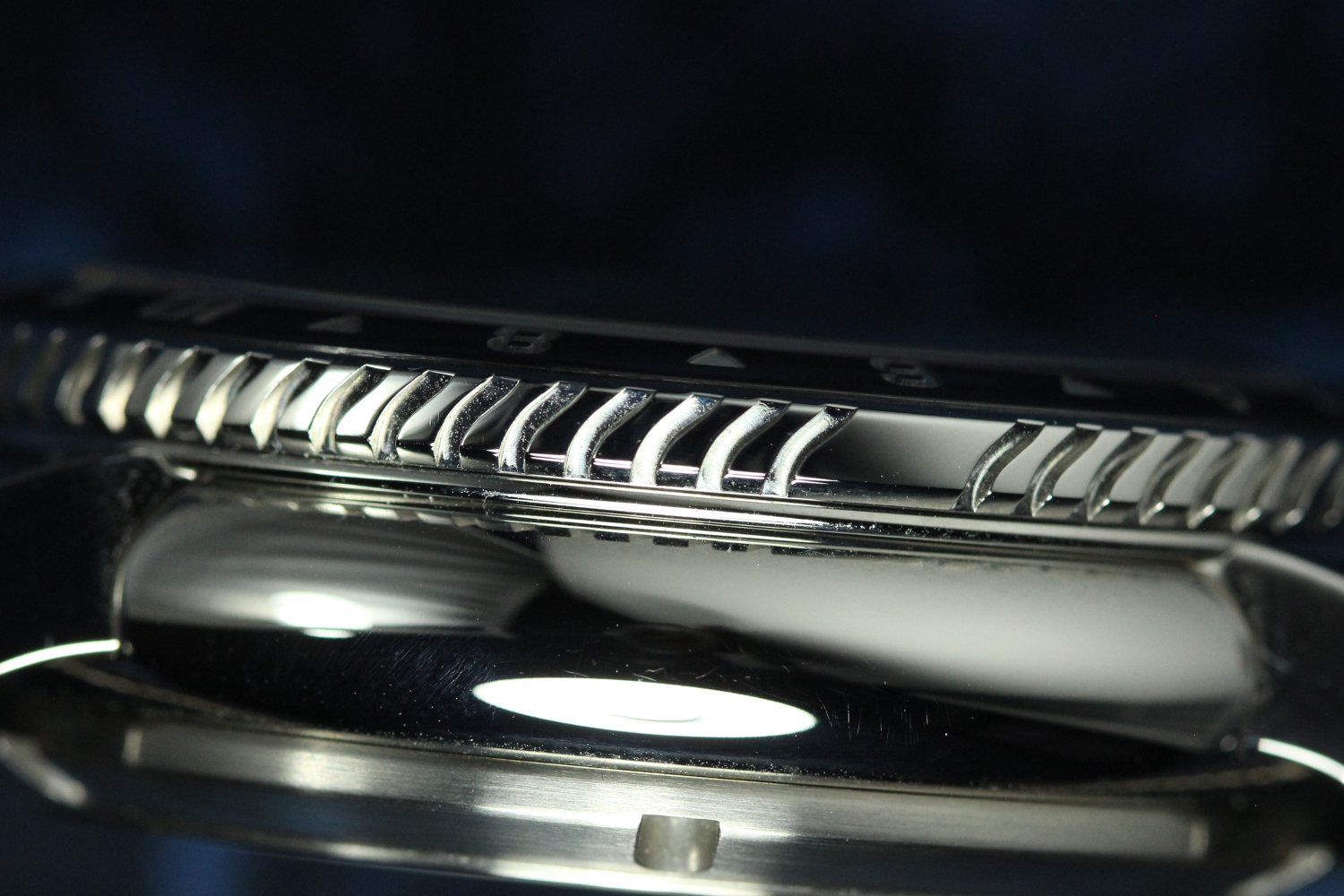 The trigger adds another 8 millimeters to the left hand side and the thick bezel makes it sit very tall on the wrist, yet despite the heft, it wears smaller than you would expect. The short lugs ‘shrink’ the case to have a more manageable wrist presence, but don’t expect this to fit under a tight shirt cuff. 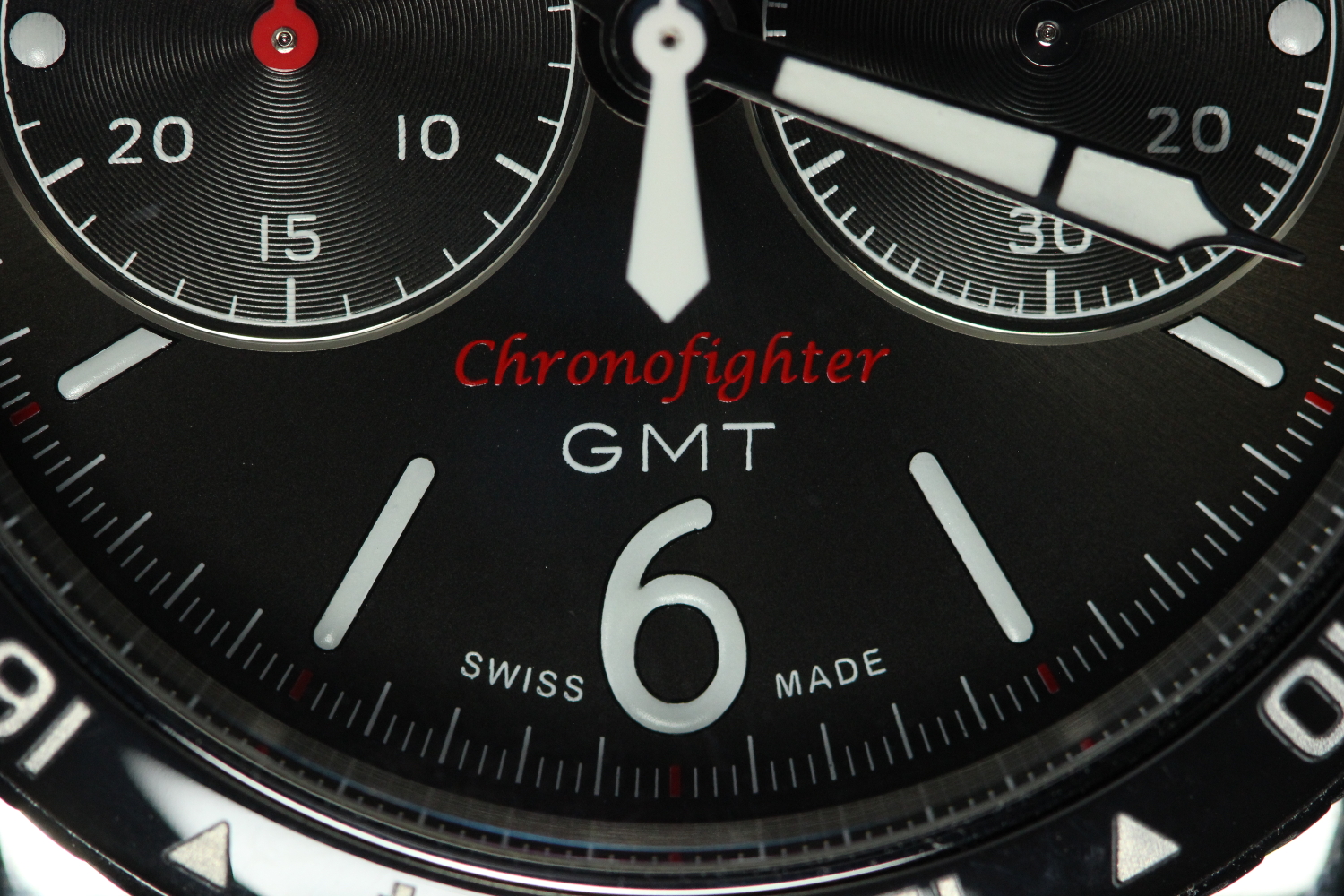 Whilst this is called the Chronofighter ‘Vintage’ GMT, it is not a ‘heritage’ watch like the Tudor Black Bay or the new Omega Seamaster 300. The vintage elements present (the cathedral hands and the double date window) are overshadowed by the contemporary case size and modern feel of the watch. It looks more vintage than some of the other Chronofighters, which experiment more with hour marker design, but the Vintage GMT is a modern watch, through and through. I would be really interested to see what a ‘true’ heritage watch from Graham would look like, even though they have no watches from earlier in the 20th Century. 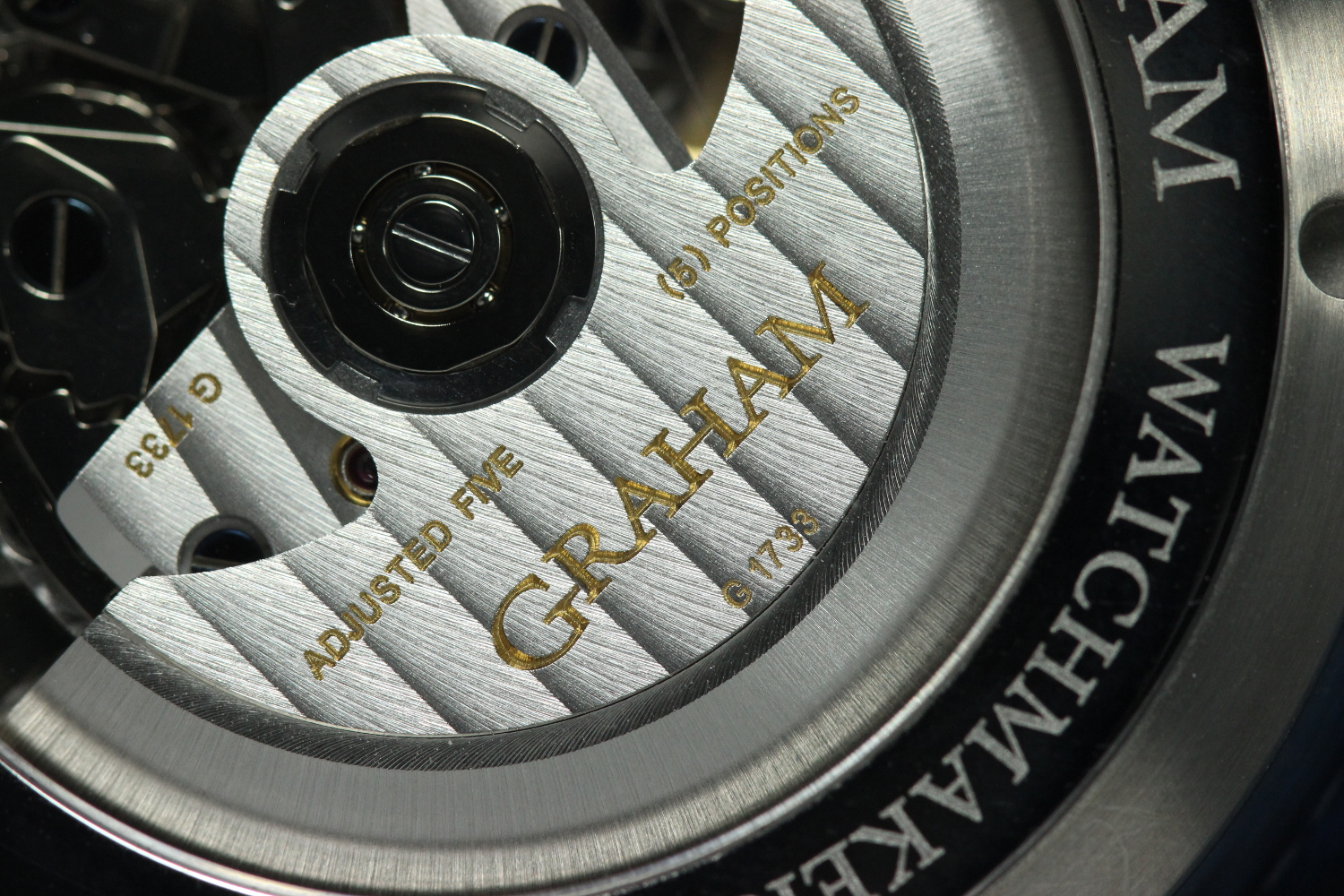 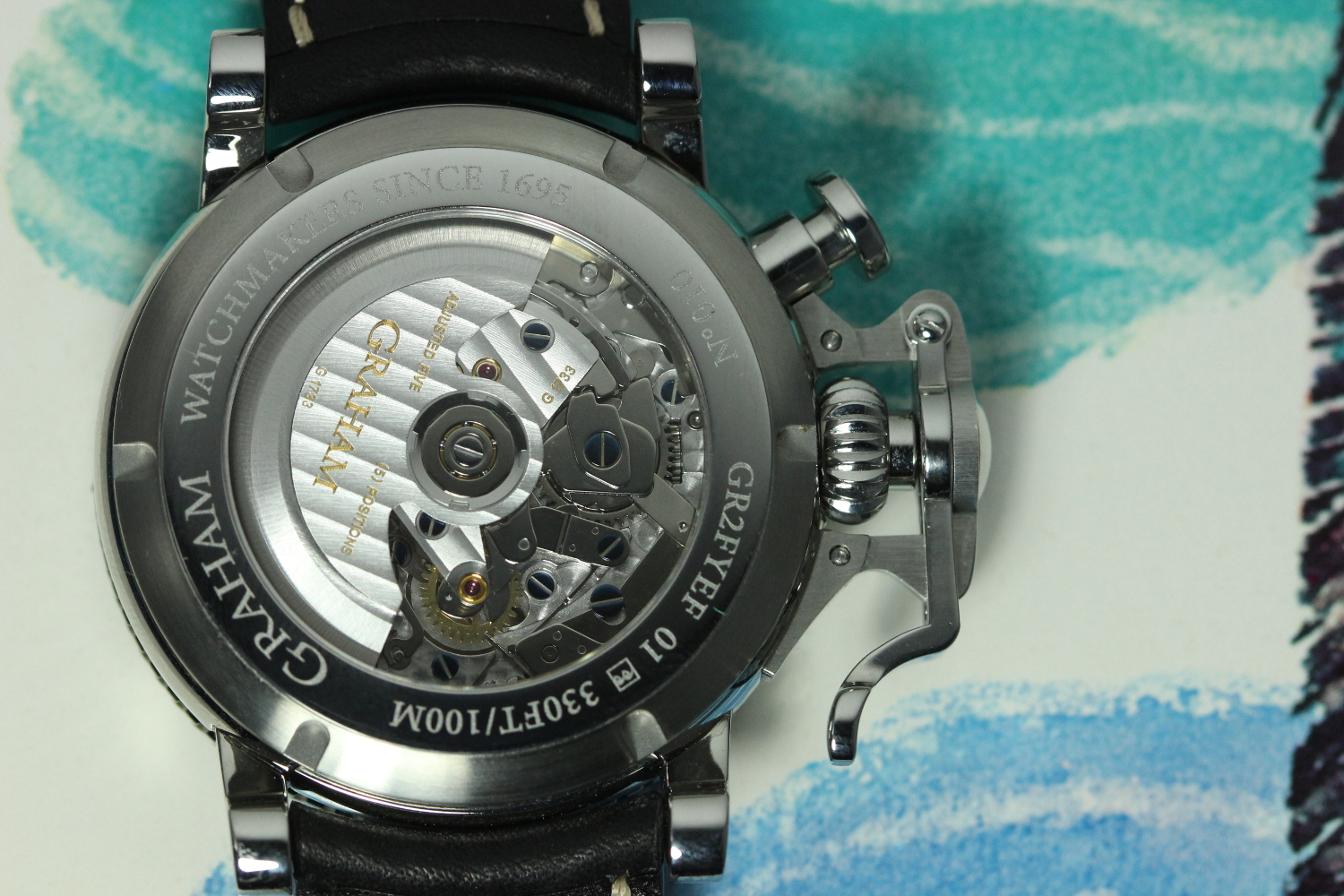 Inside the watch is the Graham Caliber G1733, a modified ETA Valjoux 7750 with added GMT module and customized rotor. It has an 40 hour power reserve and beats at 28,800bph. The 7750 is a real workhorse of a movement and it was reliable during my time with the watch, although I would have preferred to see a column wheel chronograph movement over a CAM. The ease in which the chronograph can be activated with the trigger is high and I imagine it would have been perfect when combined with the feather-light touch required to start a column wheel. The movement is decorated with the traditional Geneva stripes on the rotor, along with a perlage finish on the base with a few blued screws thrown in there for good measure. I have seen more impressive decoration on watches in this price range but decoration is never the be-all or end-all of a watch. 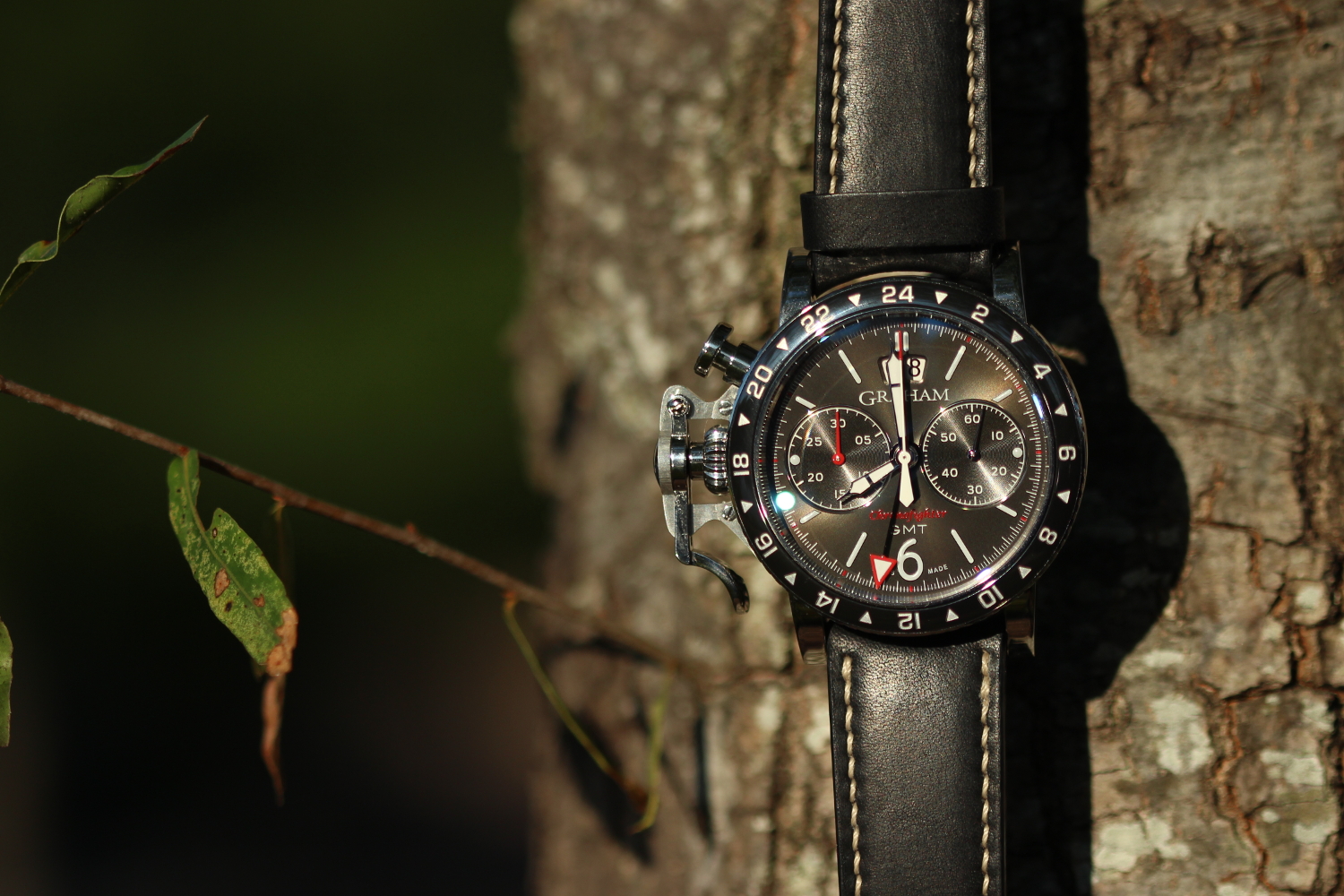 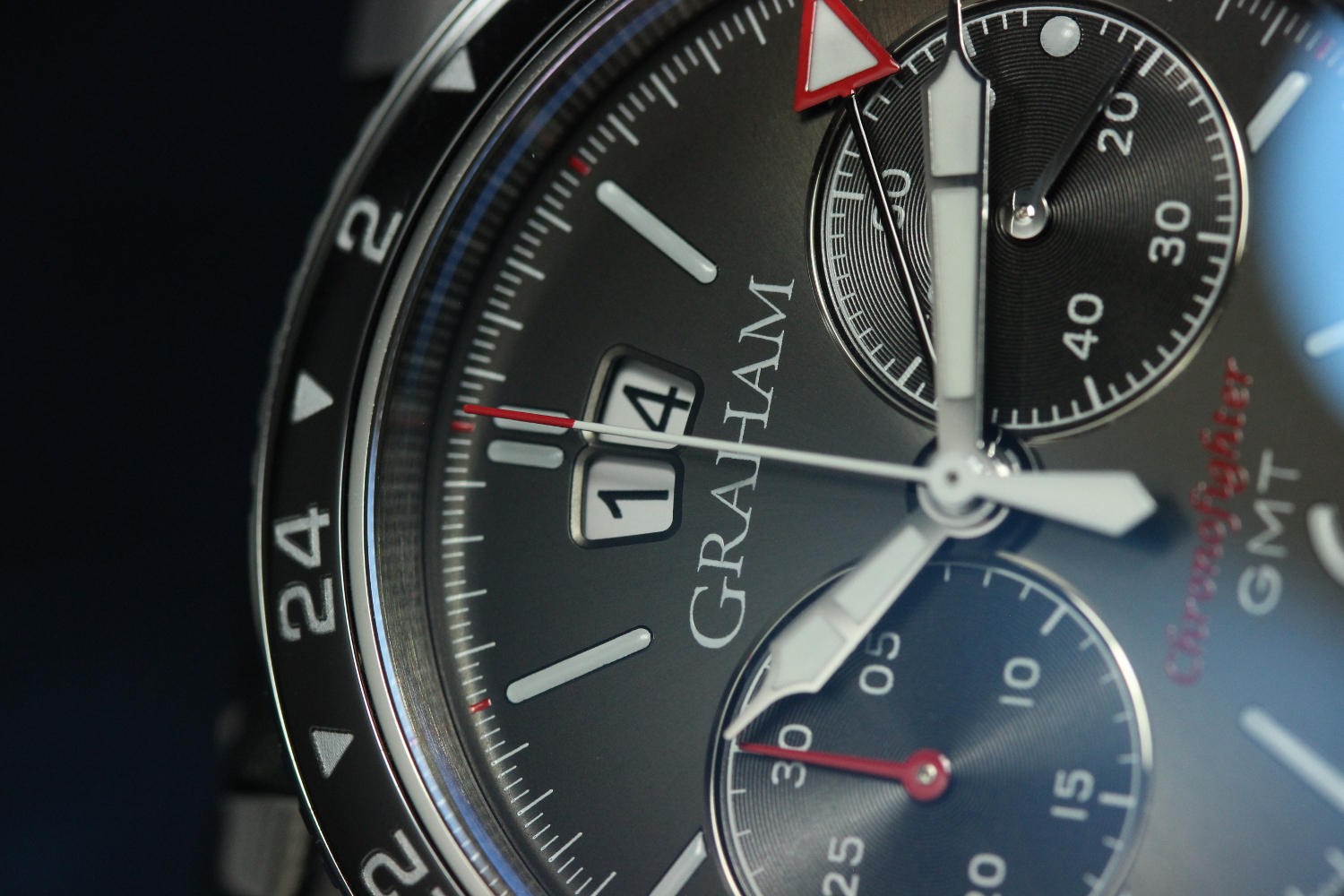 After two weeks with the Graham, I really was enamored with the unique design and functionality. There were times when the size was a bit large for my particular mood and I was constantly worried about scratching the gigantic, over-sized buckle, but by the time I sent it back, I wanted more time with it. It may not be perfect, but the Graham Chronofighter Vintage GMT offers a unique chronograph design that you can’t find anywhere else.