A Fortnight Review: 2 Weeks on The Wrist With The Omega Seamaster Planet Ocean 42mm Watch

We do like to do hands-on here at WristReview, in fact, it’s probably the only reason we are here is to handle all the fine watches we possibly can and then report on them. We’ve been on a couple of trips this year and there could well be more to come, but between them is this, my two-week account of wearing a Planet Ocean watch. Admittedly it’s not the latest model, it’s a 2016 pre-Master Co-Axial calibre timepiece (which is actually going on sale soon at the time go writing), but I figured we could still talk about it, these can be had for a steal if you are prepared to shop around a bit. Edit: This particular watch was actually made in 2015, not 2016 as stated. 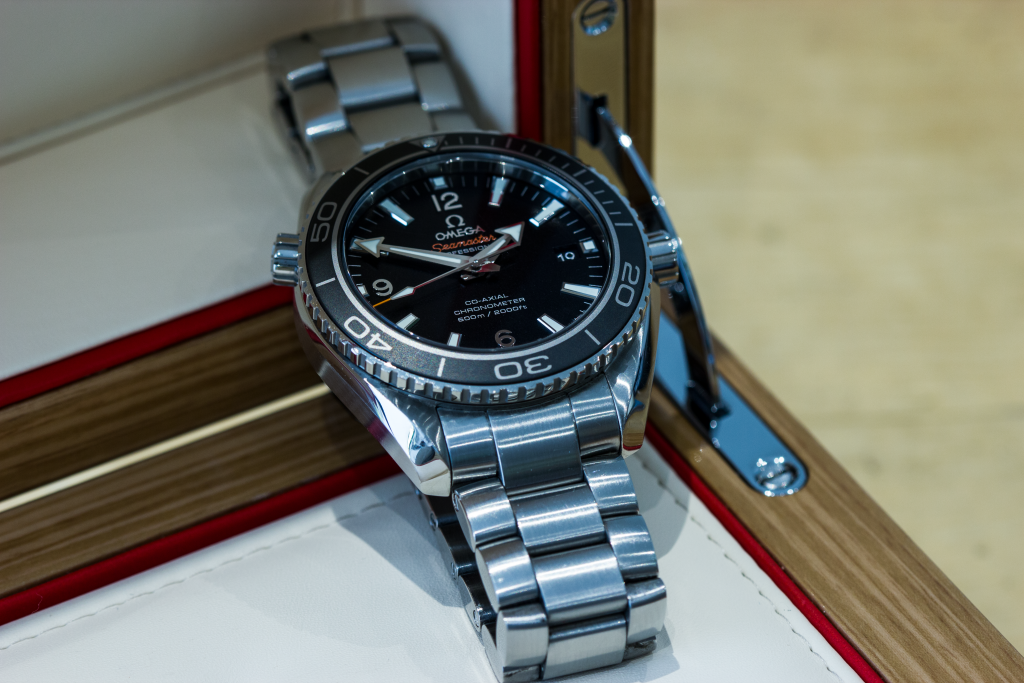 Let’s start with the basics and that’s how it feels and wears on the wrist. I was chatting with the previous owner of the watch about this and we agree that those who blindly state their Submariner is of a much superior quality to this without actually trying it are wrong. Sorry folks, the jury’s out in this one and it’s a lot more equal than you think. Granted, if you take the ageing design of the Seamaster Diver 300 (aka the Bond Seamaster) or the quite hit and miss Seamaster 300 as seen in Spectre, then it’s a bit more tricky. We still feel though that the Planet Ocean is pretty much the pick of the bunch when it comes to the Seamaster range. It’s quite large, it’s modern and it uses some interesting things on the new models such as the Liquidmetal bezel and the helium escape valve. 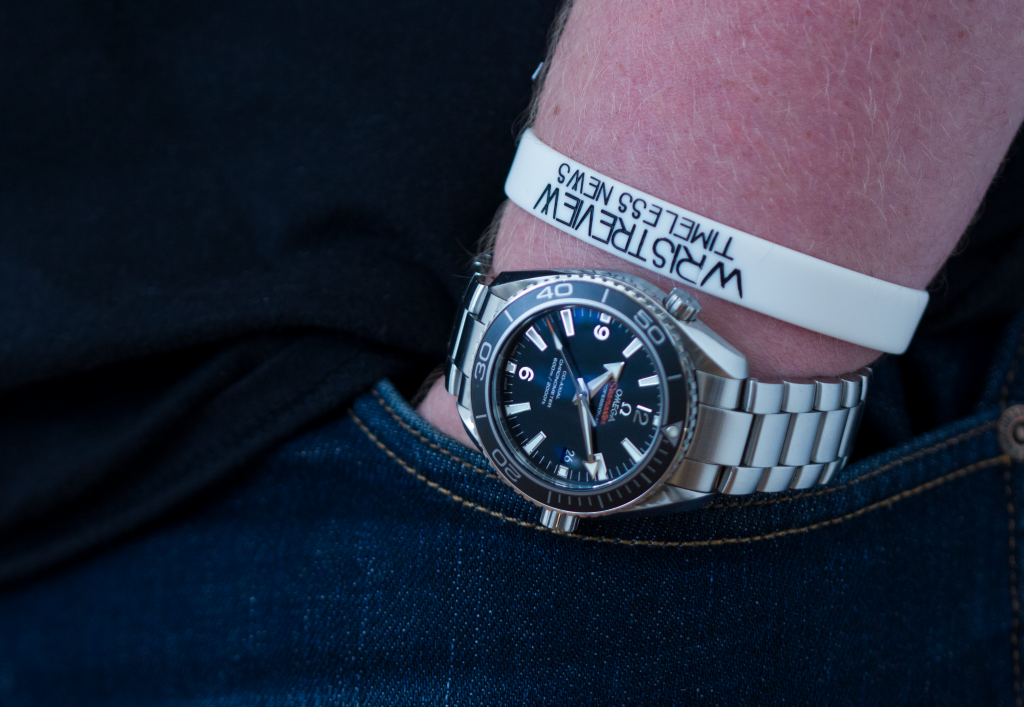 For a 42mm this watch is big, on my 7.5” wrists it’s more like a 45mm watch, in fact I’ve worn 44mm-45mm watches that are actually smaller than this. This is down to a few things, first off is the thickness of the watch and the bracelet, if you’re familiar with the Bond Seamsters you’ll know that they’re quite large usually, but thin as well, almost like a pancake on the wrist. This bad boy is the opposite of that and you can tell of the extra thickness by the fact that if you look through the sapphire caseback you can see the movement is not flush to the crystal like it is on, say, the Aqua Terra. When I measured it with a pair of callipers it came in at 16.3mm thick, over 3mm thicker than a Submariner. It also weighs in at a hearty 190 grams on the scales. Trust me, this watch plays with the light and fools you into thinking it’s larger than it actually is. 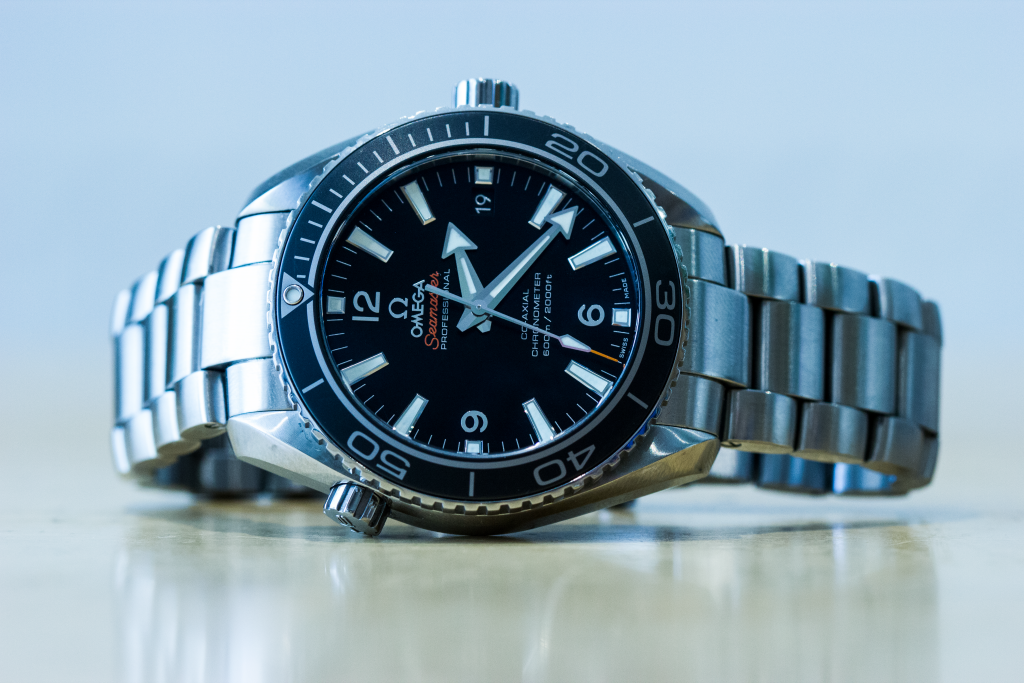 This watch is made up of many elements, all of which have different finishing styles that come together to make it sparkle under the correct light. Starting with the case, look at the bracelet and the sides of the case which are brushed. Now, look at the edges that flank the case and the grips on the crowns which have been polished. Under the sun these parts glimmer in an eye-catching way, it’s amazing to think really how many meetings they had to decide which parts should be brushed or polished. Looking at the dial, the first thing you’ll notice is that this is the older style without the mirror-polished ceramic. The second thing you’ll notice are the huge broad-arrow style hands, made of 18K white gold they stand out and are very easy to read at a quick glance. The length of the hands is appropriate for the size of the watch as well, thankfully, not like some other watches with weirdly short hands that take years to be sized correctly for the case. They’re also coated in blue SuperLumiNova, apart from the minute hand and the dot on the bezel which are green, but all colours fade to turquoise if left for a while, becoming indistinguishable in colour. I also like how the ends of the markers and the hands are bevelled at an angle, this allows a small nearly square beam light to be reflected back to the wearer, making the watch dial sparkle under the correct lighting (I noticed it seems to do so everywhere other than in direct sunlight). 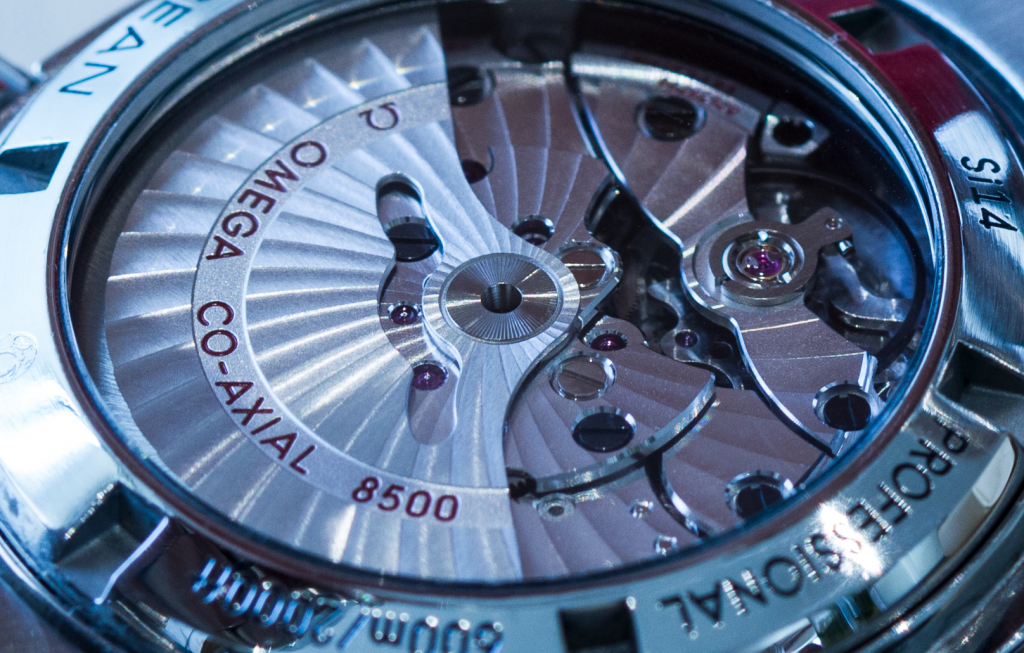 Let’s talk about the movement inside the watch now, shall we? Inside this watch is the venerable Omega Calibre 8500. I could go on and on and on singing praises about this movement, and I know that most who have owned watches with this calibre inside them will as well. But let’s go a little more in-depth than saying “it’s good” and leaving it there. As an Omega watch, it has the Daniels Co-Axial escapement in it, a complicated system where the benefits are heavily debated. If done correctly the Co-Axial escapement system removes sliding friction of the pallet stones over the escape whee’s teeth. Long story short, this is supposed to make the escapement system almost like a sealed-for-life unit, except it’s been oiled up so it actually has the same service interval as the rest of the watch. The rest of the movement is fantastic though, it’s got 60 hours of power reserve on it from two barrels, Omega’s Si14 escapement is in there too, meaning you can enjoy the benefits of their silicon escapement technology. It’s even been finished rather well and looks very smart under the caseback, if exactly like the other Omegas out there. It’s accurate too, when last tested it was running at +1 second per day. 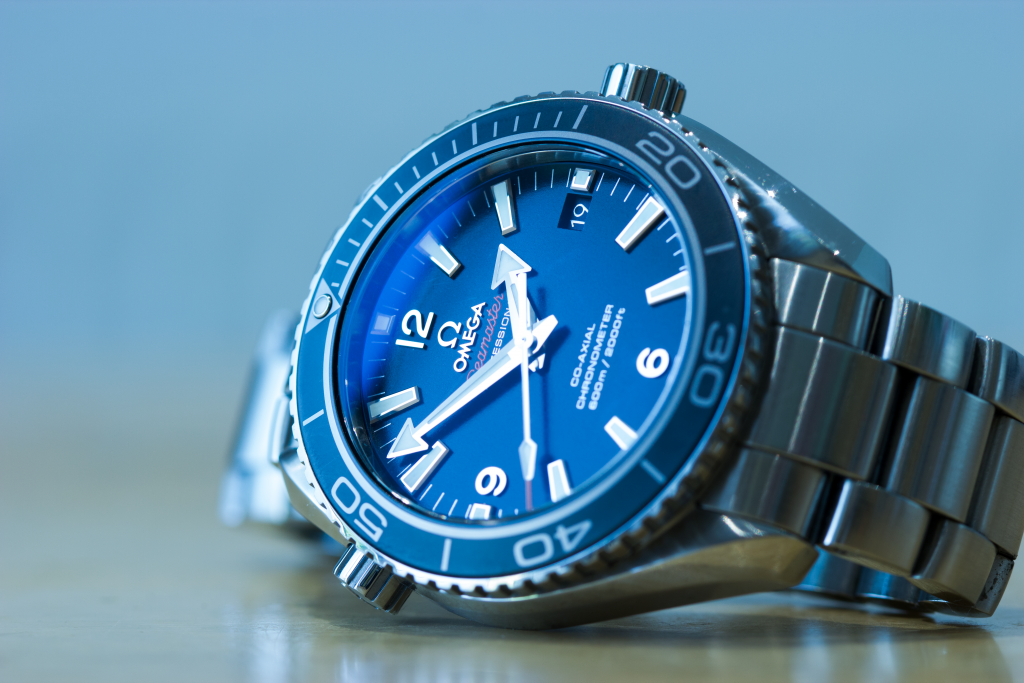 So, all’s well that ends well I guess? Well, nearly. You see, as fantastic as the watch is, you can’t help the feeling with it that you are always comparing it to the Submariner wherever you go. You will find it hard to walk down the street somewhere where there’s a Rolex AD and not go and look at the longingly, I even caught myself doing it. That seems to be the biggest problem that Omega is experiencing right now, it’s the whole ‘I can do it too!’ feel of most of their watches right now that bugs me, in fact, pretty much the only watch right now that isn’t trying to show off too much is then PloProf, and that’s because it’s enormous anyway. It’s a great watch undoubtedly, but it’s got a few issues. There’s no micro-adjustment on this particular watch (brand new ones are getting this, however), there’s just the diving extension. The matte ceramic bezel is pretty polarising, as is the infamous Helium Escape Valve, both crowns of which are very easy to adjust by the way, but I think the screw down crown for the movement is slightly too tall for the subtle crown guards and the case is slightly too thick. 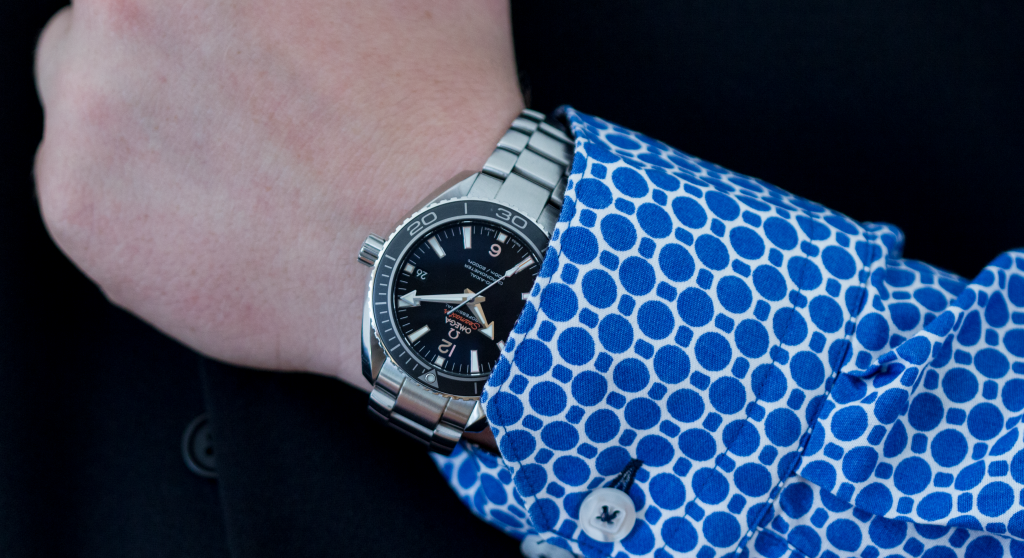 Still, the Planet Ocean is a hell of a watch, even in its smallest form. I can’t finish off without talking about the crystal itself, one Omega’s best parts that nearly everyone agrees is better than Rolex, and most other watchmakers to be honest. The crystal is coated with an antireflective coating on both sides, which makes it disappear in all lights, you can only see it at the most extreme angles. Also, the crystal is domed, but it doesn’t distort the dial, this is something Omega has been doing for a while as well. In order to achieve this the crystal has to be the same thickness all the way through the curve which is not an easy feat, considering it’s sapphire crystal. 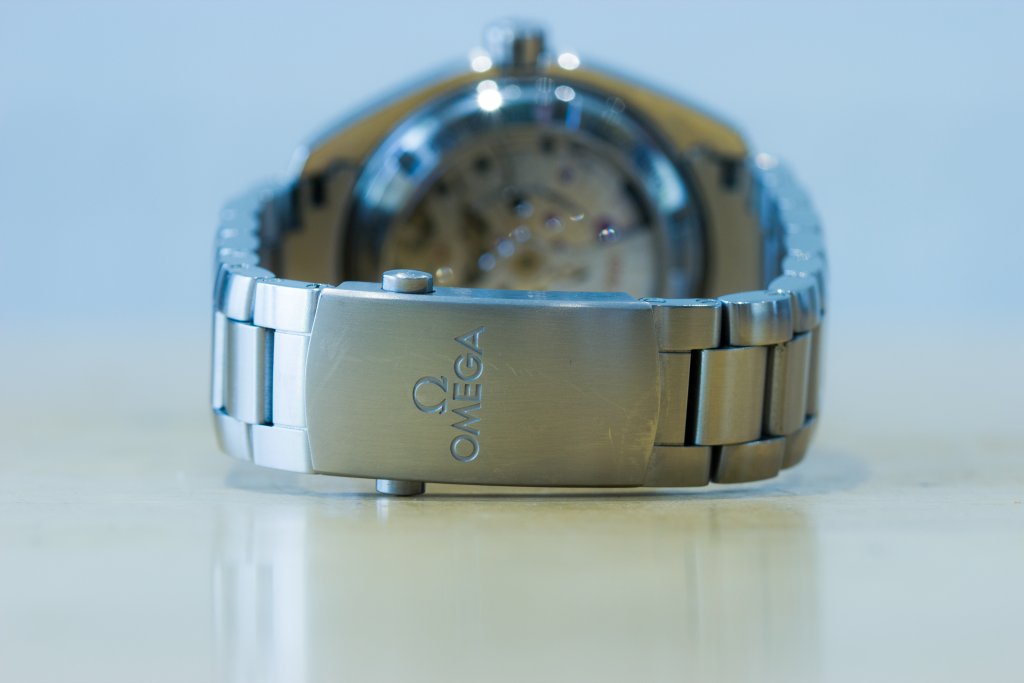 I couldn’t possibly finish without mentioning how well Omega’s new style boxes look and feel. Gone are the tacky red leather-clad ones that fade and dry out in the cupboard, replaced with new Zebrano style veneer which is lacquered to a mirror finish. The Omega plaque on the front is now a push-button release system to allow you to open the box where inside you’ll find cream leather has replaced the old felt style fabric. This is one of those things Omega does well, getting a leg-up over the competition in places where it doesn’t seem to matter, yet it ends up playing out well for them in the end. I refer you to the legendary Bond Seamaster bracelet which gave the Crown company something to think about. While some do not care what the box looks like and I understand that completely, it’s great to look at and shows that a little extra thought went in to that initial reveal, presentation is everything remember. 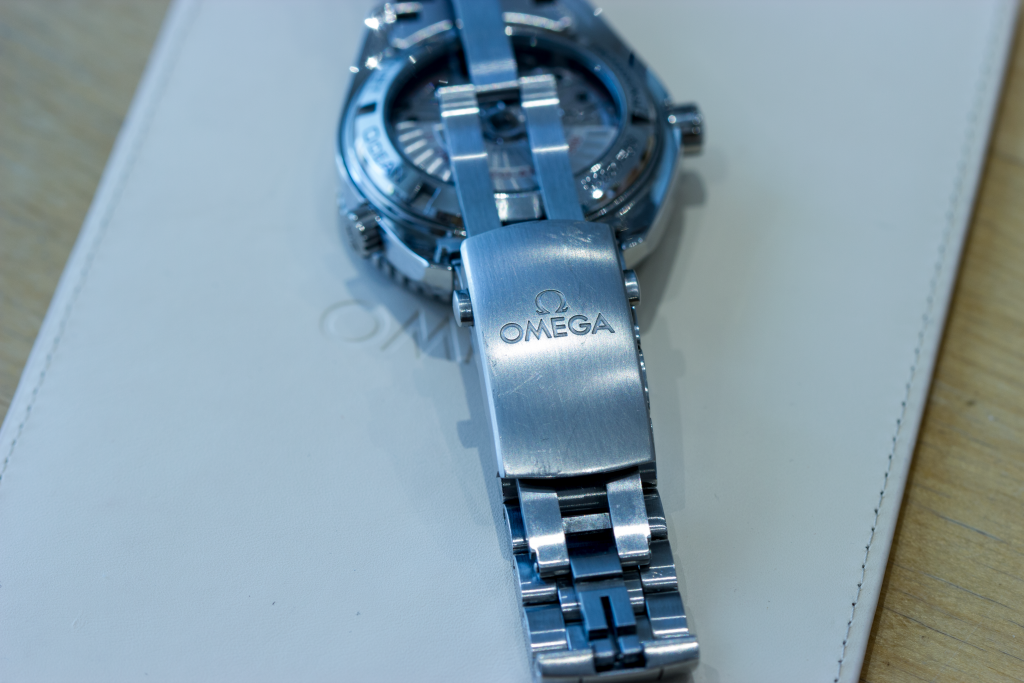 We like this watch, a lot. If you don’t want a Submariner, get this one instead, or the new Planet Ocean. Just be aware that any extra complications will make these watches much thicker in the case, so if you have a tiny wrist it will easily dwarf it even though the bracelet doesn’t overhang at all from the ends of the lugs. Mind you, they are keeping their value quite well at the moment on this pre-owned market.