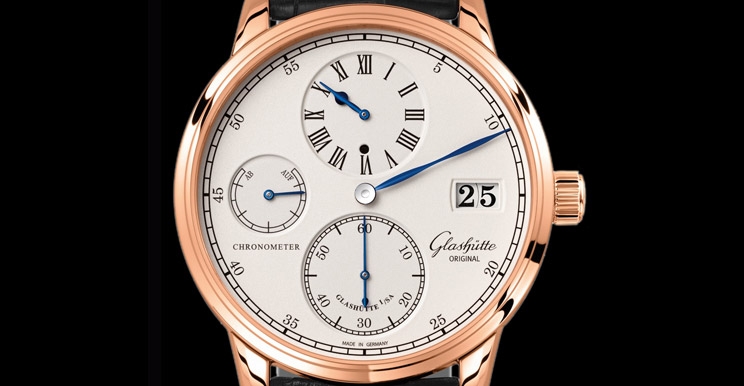 A successful symbiosis of aesthetics and precision

Aesthetics. Elegance. Perfection. These words are brought to mind at first sight of the Senator Chronometer Regulator from Glashütte Original. The new timepiece unites the classic regulator display with an officially certified manual winding chronometer movement in a satisfying and successful way.

In the past when one spoke of a regulator one referred to a particular kind of pendulum clock. These clocks were used on the one hand by watchmakers in their workshops to set the precise time and to monitor the accuracy of smaller clocks. On the other hand they were also used in scientific research, where they served as an extraordinarily precise time measurement standard. To make it easier to read the time the hands were placed on different axes on the dial: the dominant position was taken by the minute display at the centre, while the other indicators were smaller and positioned in off-centre areas of the dial. 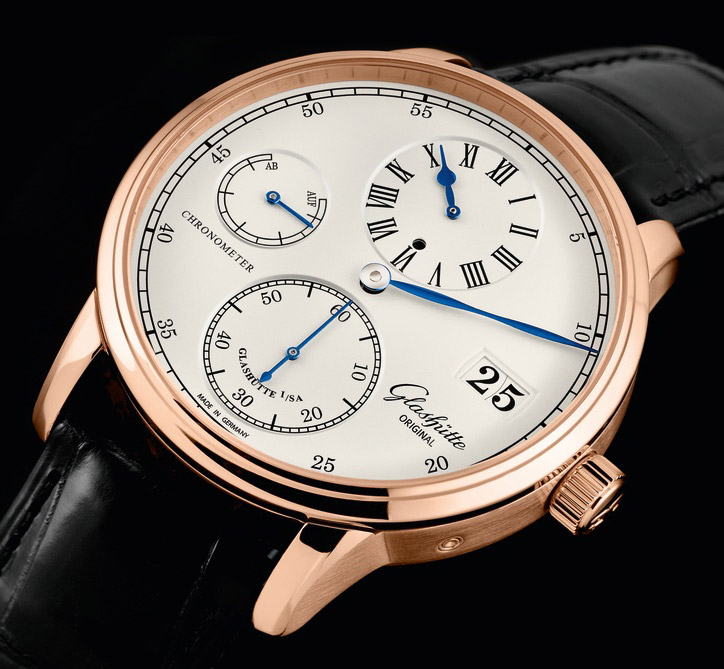 For the new Senator Chronometer Regulator, Glashütte Original took this special arrangement of the displays and reduced it to a size appropriate for a wristwatch. The dominant central position on the lacquered silver-grainé dial is occupied by the blued minute hand with its polished eye. On the central axis above and below the minute indicator are the smaller hour and seconds displays. Setting the pace at the periphery is a finely drawn minute ring, engraved and galvanised in black, as are the Roman numerals that lie beneath the hour hand’s path.

The characteristic Glashütte Original panorama date display has been placed at 3 o’clock. The deep black numerals are printed on ivory coloured discs and blend perfectly into the overall dial design. The date change takes place precisely at 12 midnight; this feature was developed by the watch’s designers and first appeared in Calibre 95. To make it easier to set the time with respect to the date change, the manual winding Calibre 58-04 has been fitted with a day-night indicator. From 6 in the morning until 6 in the evening, the small circle in the region of the hour display is white; from 6 pm until 6 am it is black. This elegant timepiece is framed by a 42 mm polished case in warm, shimmering red gold or, alternatively, in a white gold version. 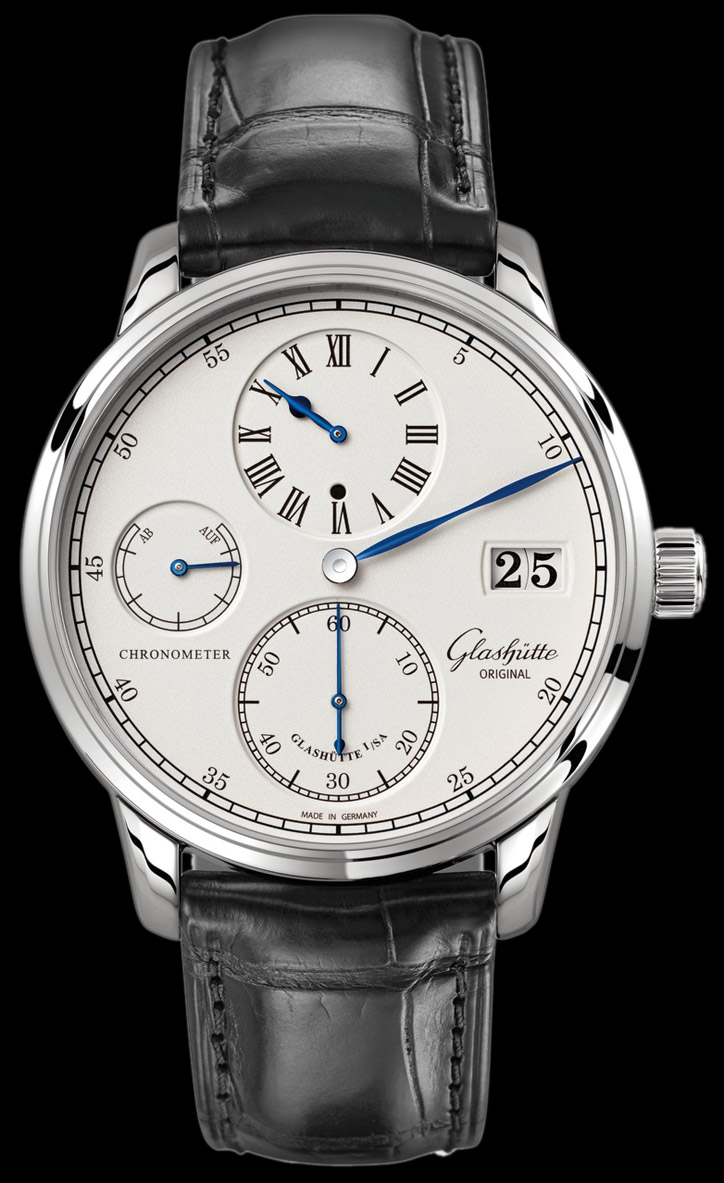 The precision of a watch is expressed by the quality and sophistication of its movement. The Senator Chronometer Regulator is driven by the manual winding Calibre 58-04, which is based on the manual winding Calibre 58-01. The movement permits the precise coordination of minute and seconds hands. Using a novel second-zero-stop-mechanism, it becomes much easier for the wearer to set the exact time. When winding the crown, the time display is stopped, the second hand jumps to zero and remains there. At the same time, the minute hand is also moved to the next full minute index. When one winds the crown to set the time, the minute hand always rests only on the full minute indices. This means that the correct relationship of the displayed seconds and minutes remains assured. A power reserve display positioned at 9 o’clock on the dial indicates the energy remaining in the manual winding movement. 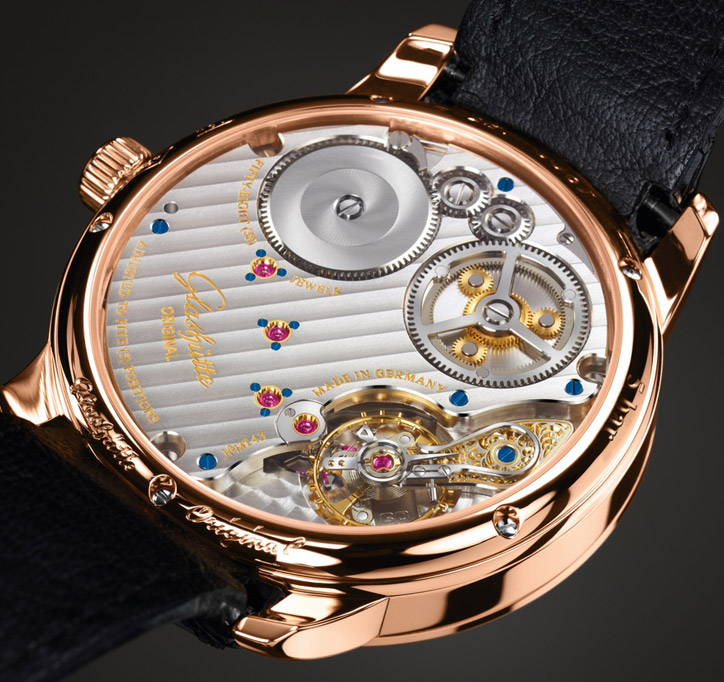 The Senator Chronometer Regulator is officially certified and bears a certificate from the German Calibration Service (DKD). Unlike the similar tests performed by the COSC in accord with the Swiss testing standard, which specifies that each movement (without its final case) must be tested in five positions, the entire watch is tested during 15-days in Glashütte.

The sapphire crystal case back enables one to observe and quietly enjoy the sophisticated movement. The most eye-catching features of Calibre 58-04 aren’t only its bi-colored engraved balance-cock, but also ist spring barrel and its winding wheel with a visible planetary gear-train for the power-reserve display. Bevelled edges, polished steel components, blued screws and the swan neck fine adjustment are easily admired, as are the characteristic Glashütte three-quarter plate with Glashütte stripe finish.

Both Senator Chronometer Regulator models are complemented by semi-matt black Louisiana alligator leather straps in a classic style with a double foldover clasp. 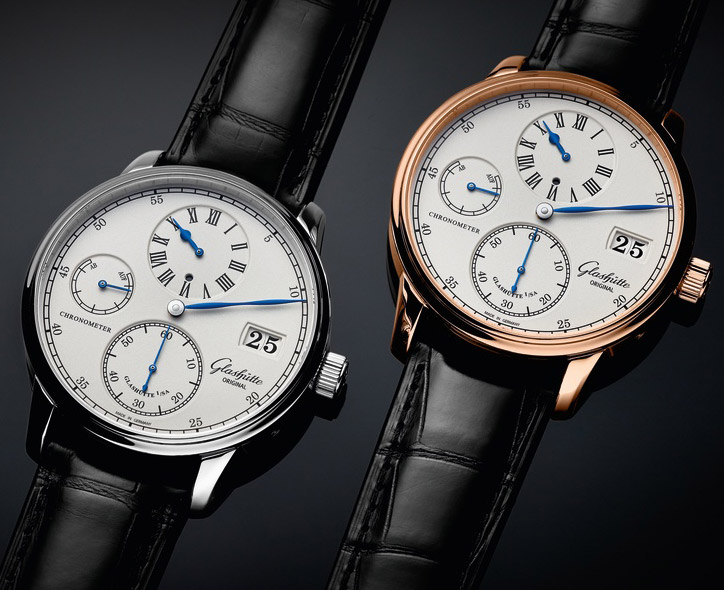