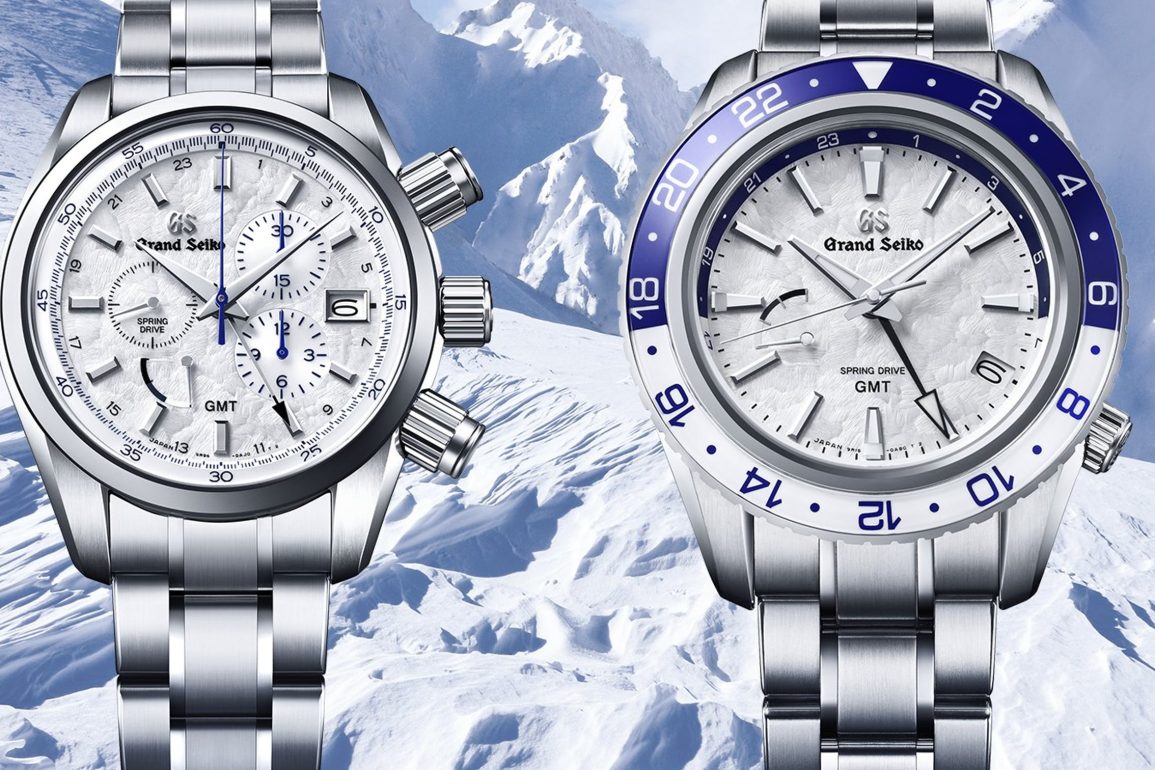 Grand Seiko is well known for emulating the Shinshu winters on its dials and this new pair of limited edition sports watches is no exception. We have a GMT and chronograph GMT that celebrate two different anniversaries – the 20th anniversary of the first Grand Seiko GMT and 15th anniversary of the Spring Drive Chronograph. Textured dials have become a hallmark for the brand and winter/snow is a common theme. Shinshu, Japan is where Spring Drive watches are produced and the atelier is surrounded by snow-covered mountains. Perfect inspiration. 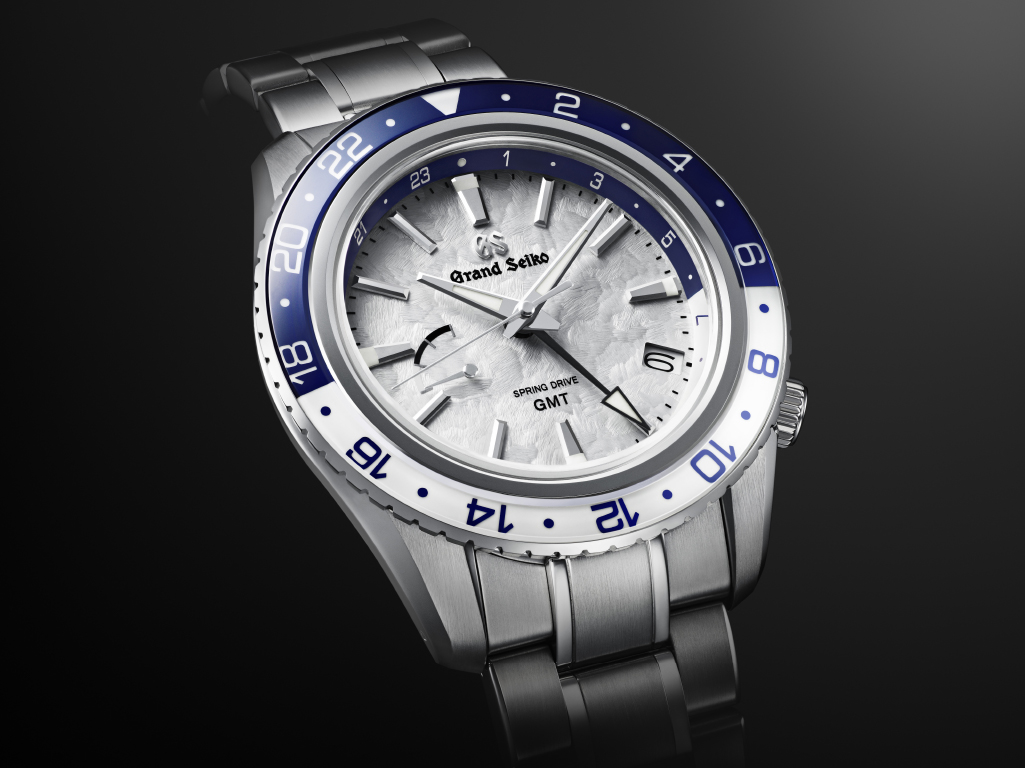 The first Grand Seiko GMT debuted in 2002, which was two years before the Spring Drive movement. The new GMT SBGE275 celebrates this milestone, but ironically with a Spring Drive (9R16) running the show in lieu of an automatic. The stainless steel case is 44mm in diameter with a thickness of 14.9mm, so we’re talking about a rather bold watch. There are brushed and polished surfaces, which flow seamlessly into the three-link steel bracelet with deployant clasp. The prominent bezel has a sapphire insert with white/blue halves and a 24-hour scale. In-house LumiBrite covers the white half with the numerals remaining dark for contrast, while the blue half remains dark with its numerals glowing through for a day/night effect. An internal ring at the outmost perimeter matches this in style and color (minus the lume), and fills in the odd numbers as the bezel displays even counterparts every two hours. The screw-down crown is positioned at 4 o’clock and the triangular GMT hand can be independently set. Water-resistance is rated at 200 meters and the watch is magnetic resistant to 4,800 A/m. A dual-curved sapphire crystal protects the dial and there’s an exhibition case back. 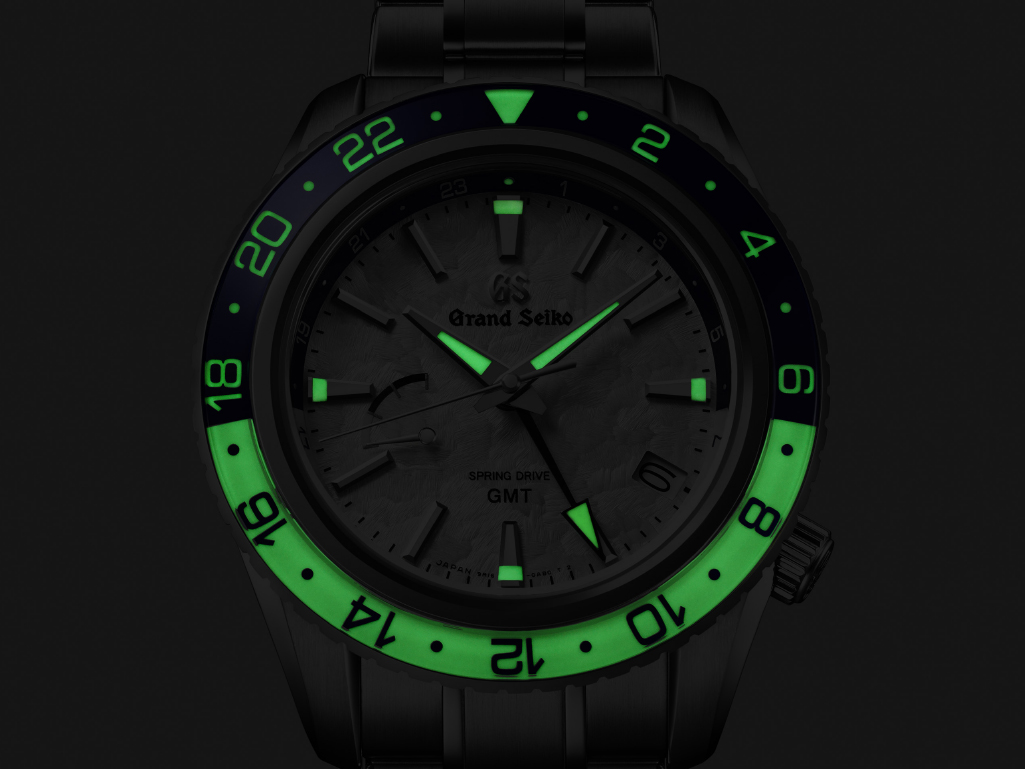 If you hike around the late winter landscape of Shinshu (central Japan), you’ll get a firsthand look at the dial’s inspiration. The pattern of snow from strong mountain winds is well represented behind the sapphire crystal, which is a bit rougher and wild compared to the muted Snowflake dials. The hour and minute hands, along with the applied indices are faceted and Zaratsu-polished, exhibiting the best of Grand Seiko. The hands (including the GMT triangle) and indices at 12, 3, 6 and 9 o’clock are also filled with LumiBrite. The Spring Drive 9R16 powers the watch with a hybrid electric/mechanical design. It combines a conventional mainspring with an electric regulator, resulting in a smooth gliding seconds hand and increased accuracy. How accurate? +/-10 seconds per month, which is more accurate than many mechanical movements PER DAY. It has a 72-hour power reserve, which is shown via a power reserve indicator between 8 and 9 o’clock, 30 jewels and automatic winding. 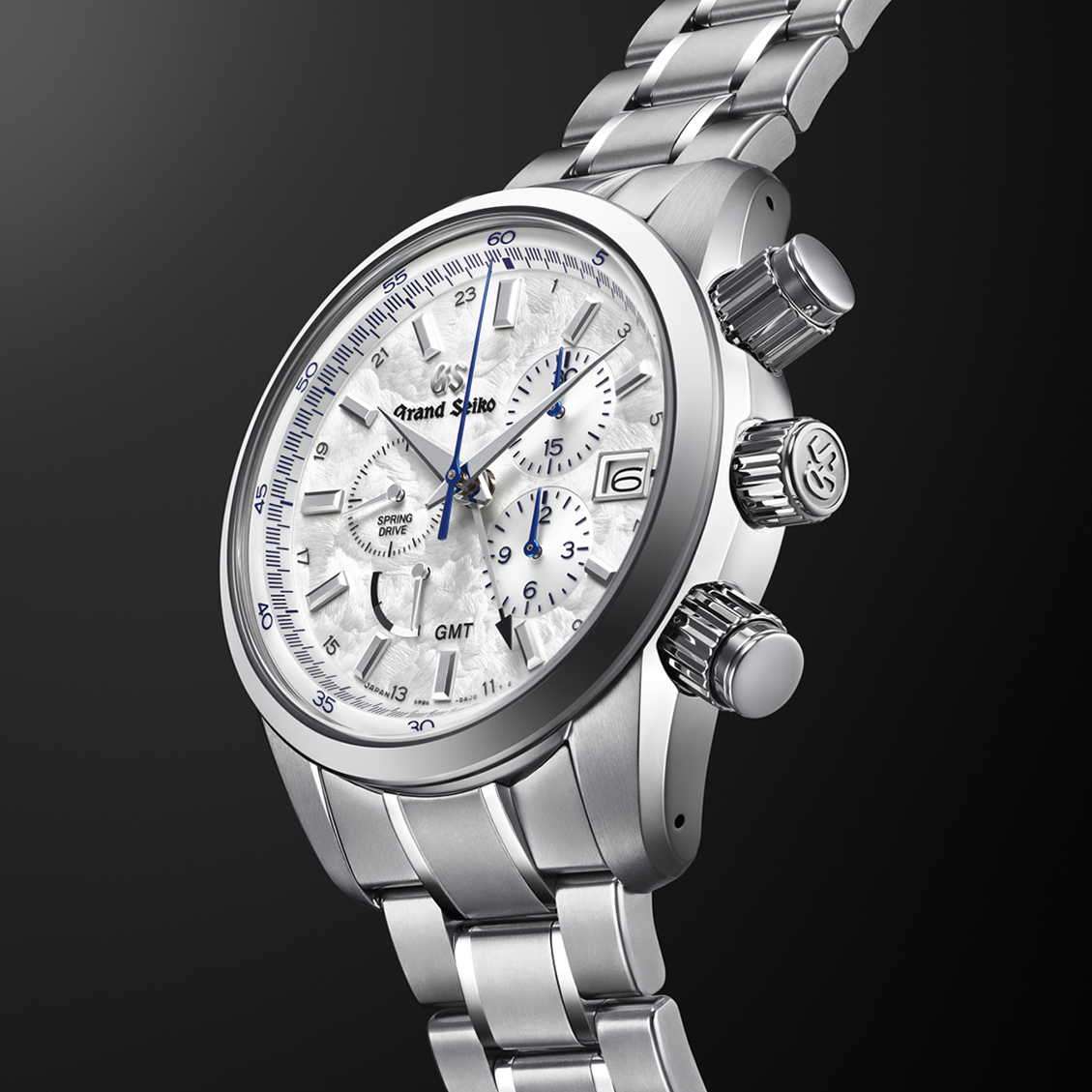 The new chronograph celebrates the 15th anniversary of the first Spring Drive Chronograph. And yes, it’s powered by the Spring Drive 9R96, not an automatic (which would’ve been an interesting twist given the Spring Drive in the GMT SBGE275). It’s a large piece as well, coming in at 43.5mm in diameter with a thickness of 16.1mm. However, the case is titanium this time, significantly reducing overall weight. The dial has the same snowy theme as the GMT SBGE275 and the power reserve indicator has shifted down, now between 7 and 8 o’clock to accommodate the sub-dials. Those are uniquely arranged with the 30-minute and 12-hour counters stacked on the right side with the date window tucked in at 3 o’clock. The small seconds is positioned at 9 o’clock. This has a GMT function as well, so either model is great for frequent travelers. There are the usual faceted and Zaratsu-polished hands and indices, and the chronograph hands are blued. The 60-second scale is on an inner ring at the perimeter (no tachymeter on the bezel). A three-link titanium bracelet, identical in style to the steel GMT counterpart, perfectly matches the case. There’s a dual-curved sapphire crystal and water resistance is rated at 100 meters. Unlike the GMT, this one is void of lume. 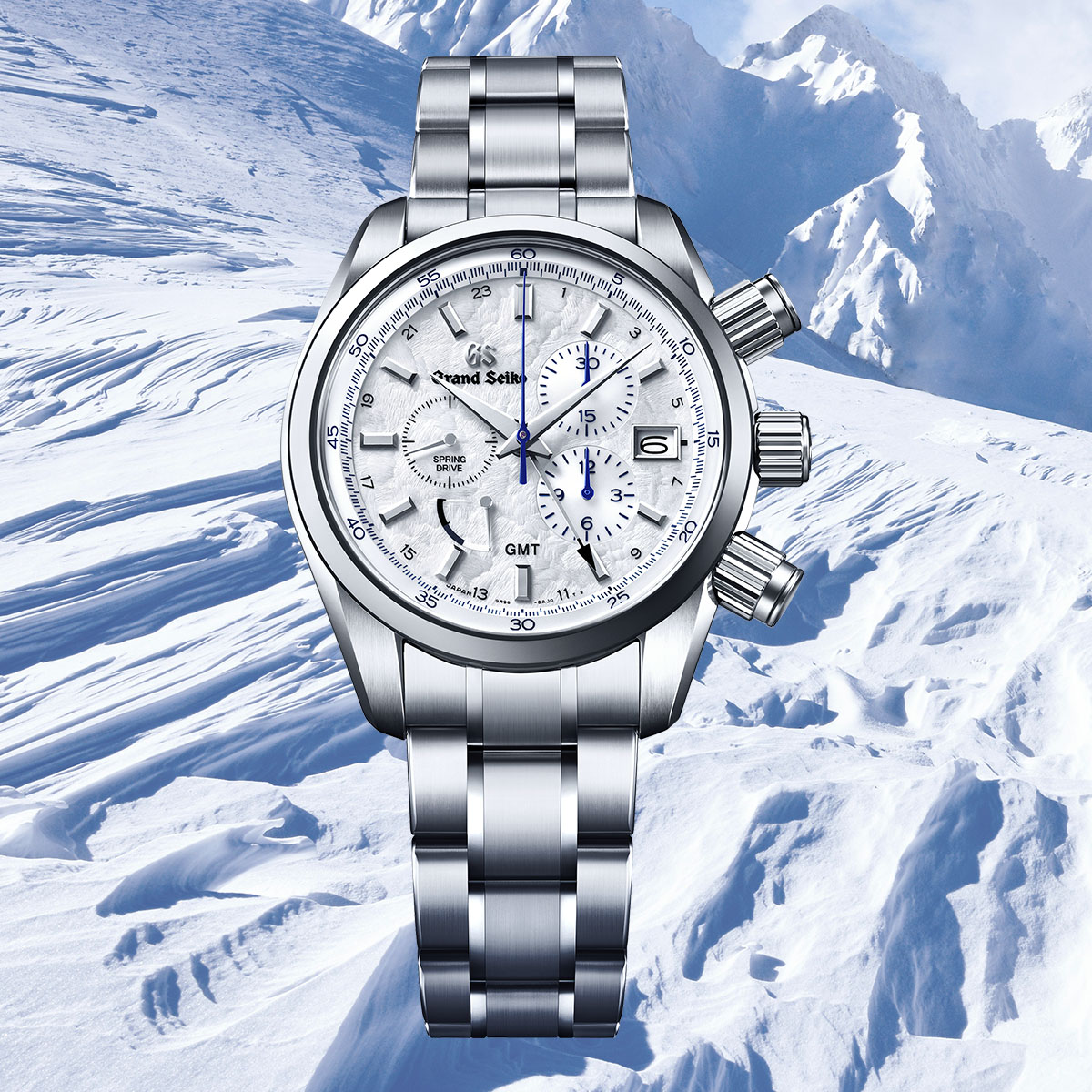 The exhibition display back reveals the 9R96 Chronograph GMT Spring Drive, which is again accurate to +/-10 seconds per month. There’s an 18k yellow gold Grand Seiko lion emblem on the rotor, which indicates high accuracy. It has 50 jewels, a 72-hour power reserve and automatic winding. It’s a well-evolved movement from the original that launched 15 years ago (9R86) with even better accuracy. A design quirk with the new chronograph is on the right side of the case – the crown and pushers are a bit too oversized. I personally like the look, but I can see it being a bit much for some, especially on an already oversized piece.