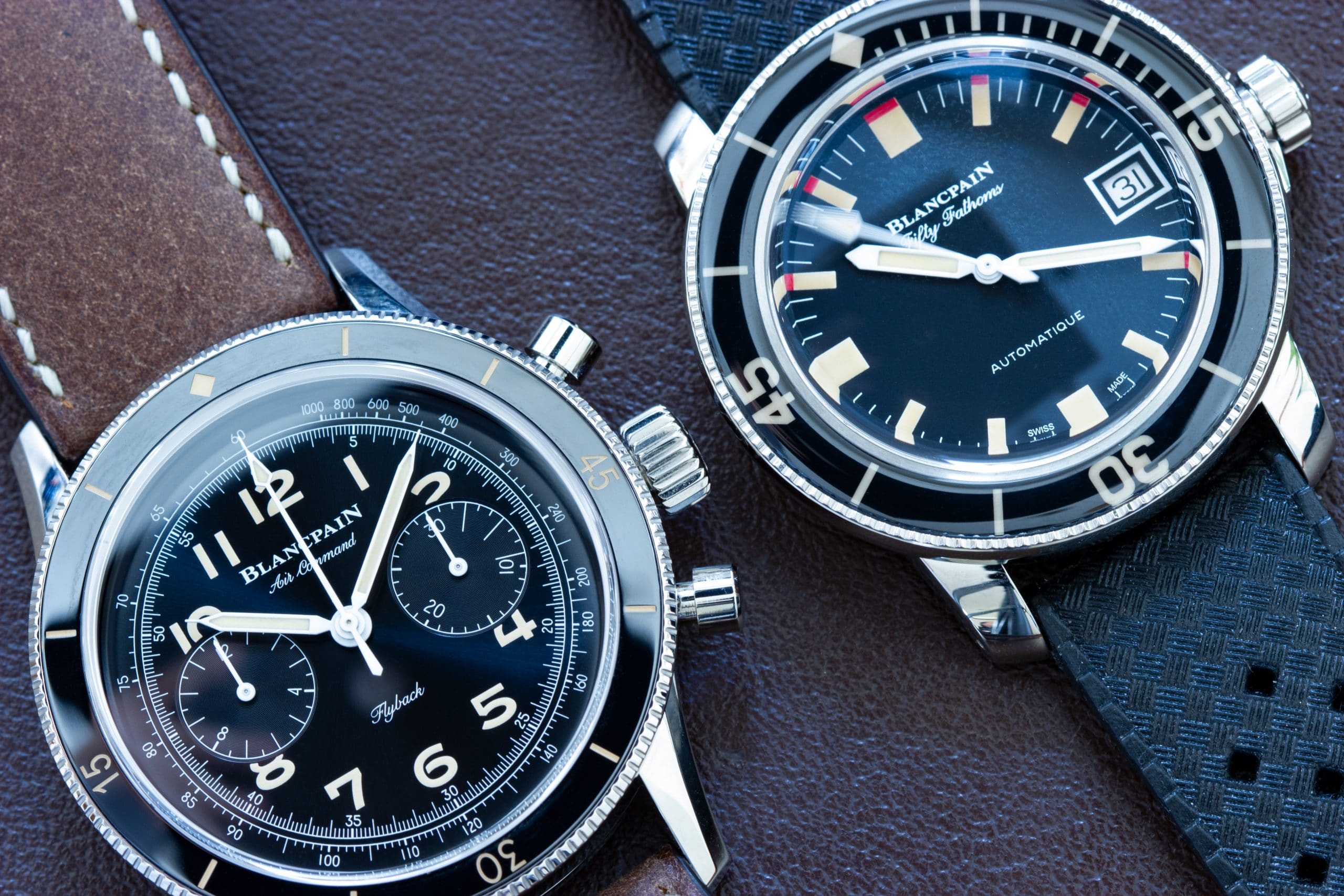 You may wonder how a brand can be both a big name and underrated at the same time, somehow, Blancpain manages it. Though they are well known in the field of watches, most people still don’t consider them when making their lists of the ‘best’ brands, and that simply isn’t fair. Blancpain watches are fantastic, to remind myself how fantastic they are I recently took a trip to their boutique in London to see two new watches from their 2019 collection: The Fifty Fathoms Barakuda and what is quite possibly the coolest watch made in the 21st century: the Air Command.

“So, what exactly is this ‘Air Command’ thingy? Aren’t Blancpain watches more associated with the depths of the sea?”, well, you’re absolutely right. Blancpain is most notable for its Fifty Fathoms watches, which have been the gold standard in dive watches since 1953. These watches back in the day were the best of the best, and were made for the best of the best as you had to be a member of the armed forces to get hold of one. That meant the publicly available Rolex Submariner became much more popular than the Fifty Fathoms, but that doesn’t mean that Blancpain was a write-off, a small company that missed an opportunity. 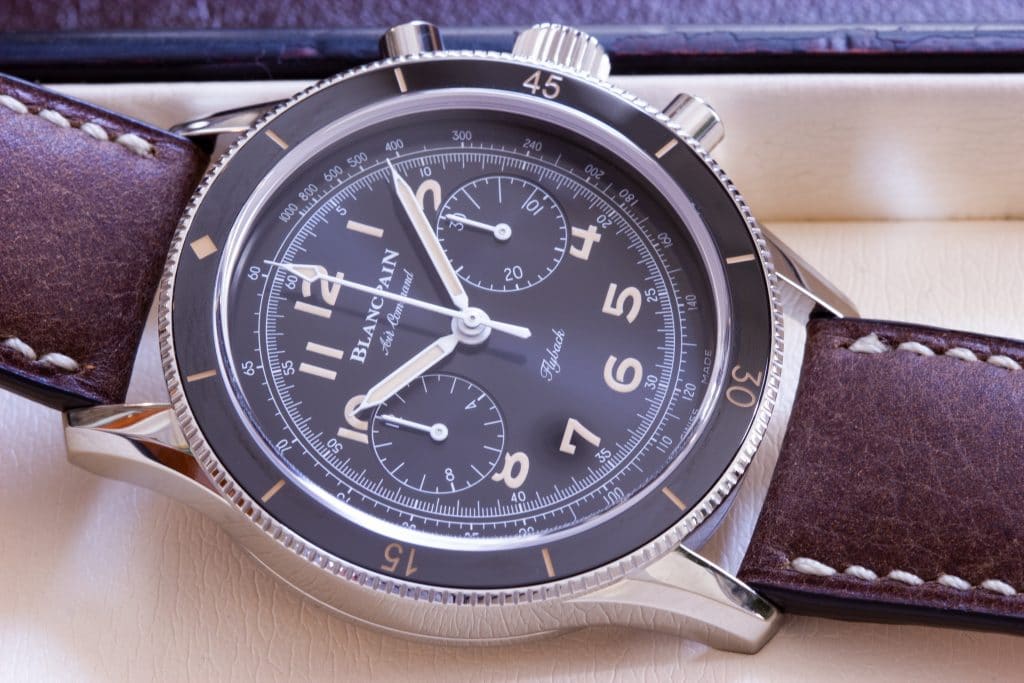 Blancpain’s notoriety for precision equipment garnered it the attention of the US Air Force, which was very interested in having a signature watch of its own. Let us not forget that for the past two decades other countries have had their own signature watches, from Britain’s WWW (Wrist Watch Waterproof) series to Germany’s infamous B-UHR watches to France in the 1950s with the Type 20 watches. Sadly, the Air Command never really took off (no pun intended. Okay, pun somewhat intended) and very few were made, and they command high prices at auction. So, to remind us of their past and that they did at one point almost have a super-duper sky owning wristwatch, Blancpain has taken the time to re-issue its vintage, and it’s done it correctly. 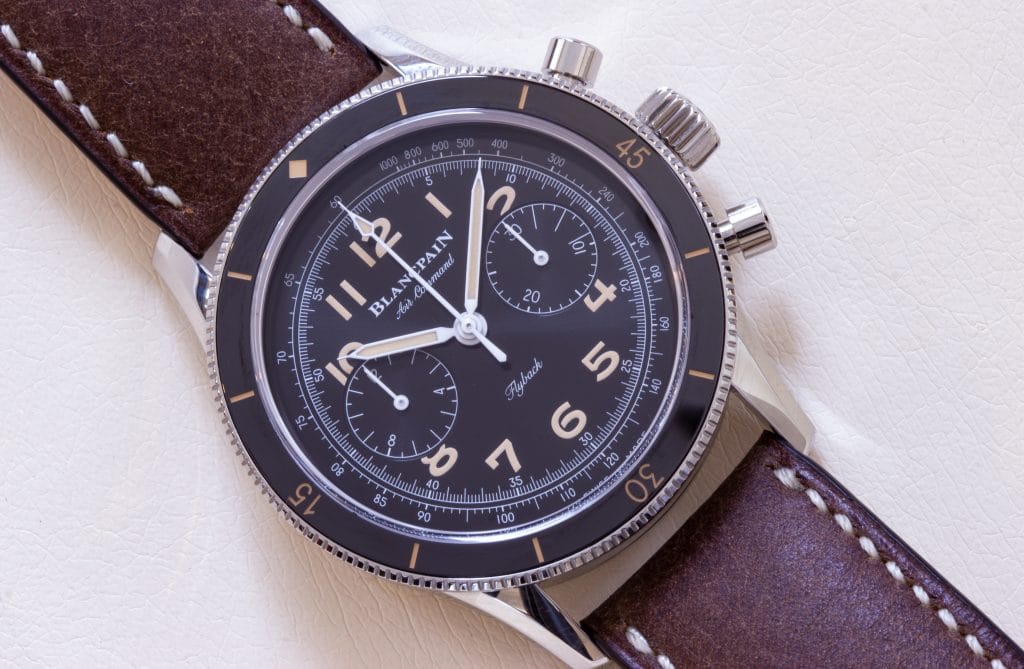 When I say correctly I mean they’ve taken the design, and they haven’t played around with the layout or changed that much. Sometimes we see watches that are supposed re-issues but have changed to incorporate a new movement or some such, and it’s not quite the same. While the Air-Command’s lineage is obvious, it hasn’t shied away from the face of modernity. The bezel is made of ceramic to resist scratches, the running seconds have been removed, and Blancpain has even refrained from including a date window to keep the design as original as possible. 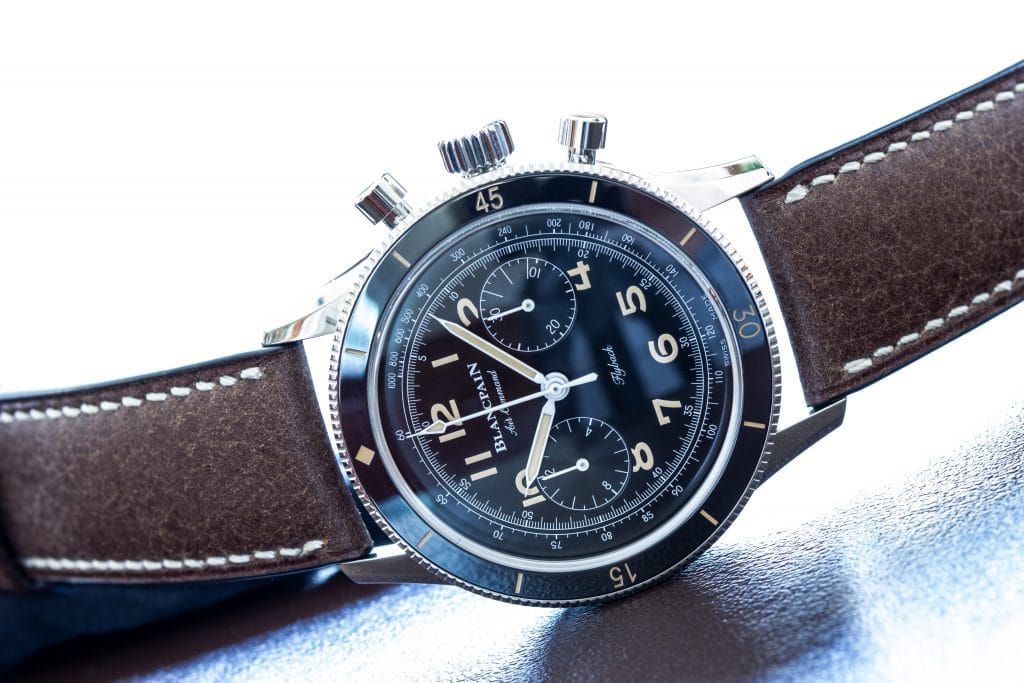 The case measures 42.5mm x 13.77mm and is very wearable. It’s not as heavy as you might expect, if you’ve ever tried a 45mm Fifty Fathoms you’ll know that despite the girth of the watch it isn’t particularly weighty, at least on the fabric strap. This watch is the same in that regard, it looks large and feels solid, but it’s not unwearable in any sense. I also appreciate the design of this watch, it’s a vintage design that’s been made contemporary, and it’s worked remarkably well. There are subtle details on the dial which impress, too. For instance, the dial has a sunburst polish and is not entirely black, but you’d never notice without the correct lighting. To me, it appears as almost an extremely dark blue in the right light, and that’s not a reflection of the boutique interior, which is predominately white. 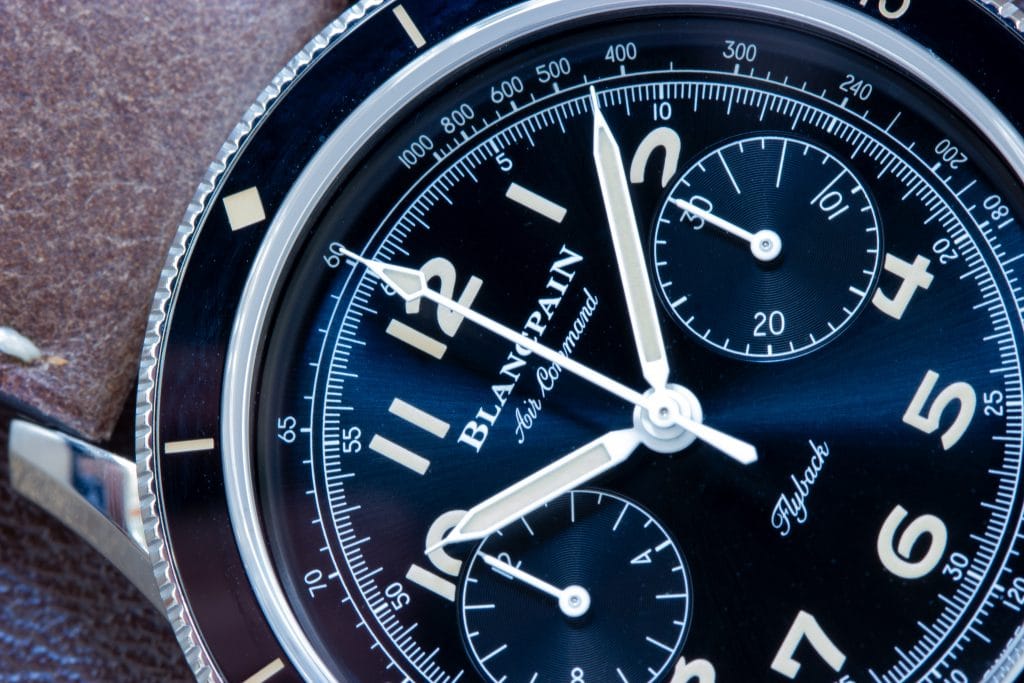 The hands are white-painted, rather than polished silver, and they and the markers have ‘fauxtina’ SuperLumiNova, that is, lume that is coloured as if it has gained a patina. The bezel markers include this orangey-brown colouring as well. The word ‘Flyback’ is subtly written on the lower portion of the dial, another slight change from the original. 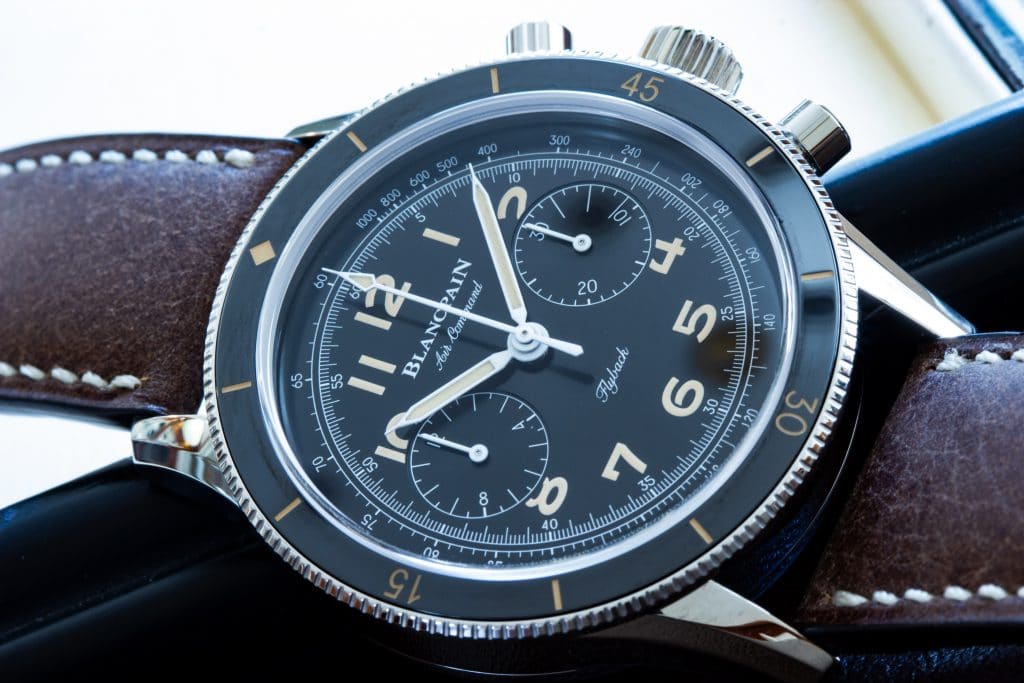 Around the back is a thoroughly modern calibre called the F388B, it’s a self-winding high-beat calibre that has a column wheel built-in and offers the flyback function demanded by pilots back in the day. The chronograph when running, can be reset without needing to be stopped first, allowing timing to continue uninterrupted. Because this calibre runs at 5Hz, it’s also more accurate than most watches on sale today. 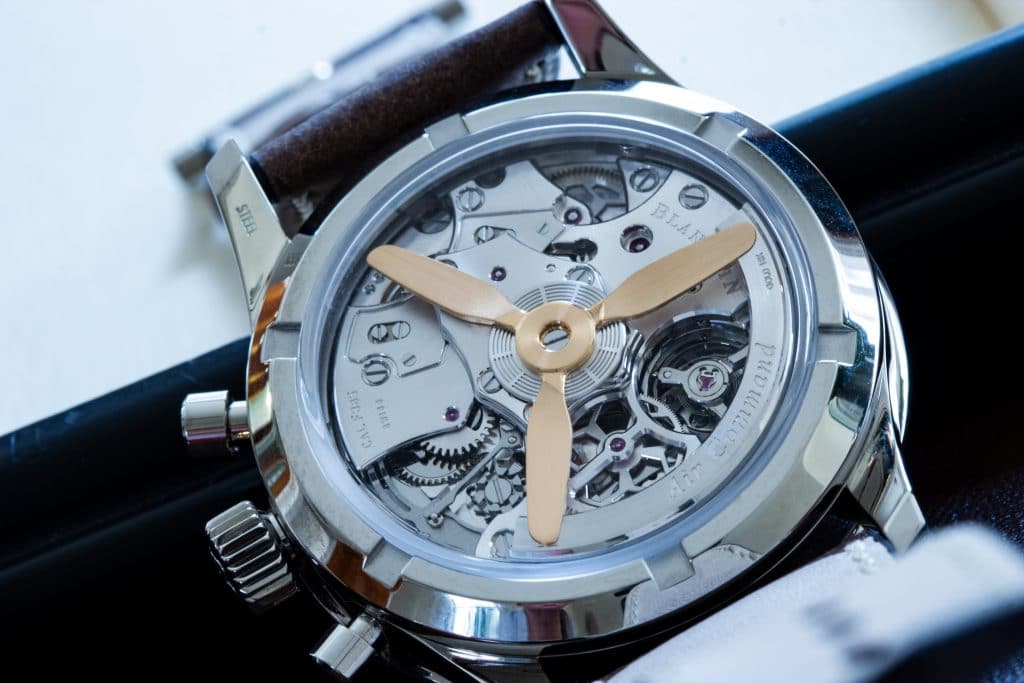 The F388B is also well decorated. Sure, there’s no super fabulous hand-engraved animals or geometric patterns, but it’s not like they’ve forgotten the movement. A subtle stripe polish spirals outwards from the centre of the movement and from underneath my favourite feature which is, of course, the gold propeller shaped rotor. No words are needed to describe that. The leather strap is of high quality as well as you’d expect, and the watch will cost 18,500 Swiss Francs and is limited to 500 examples worldwide. 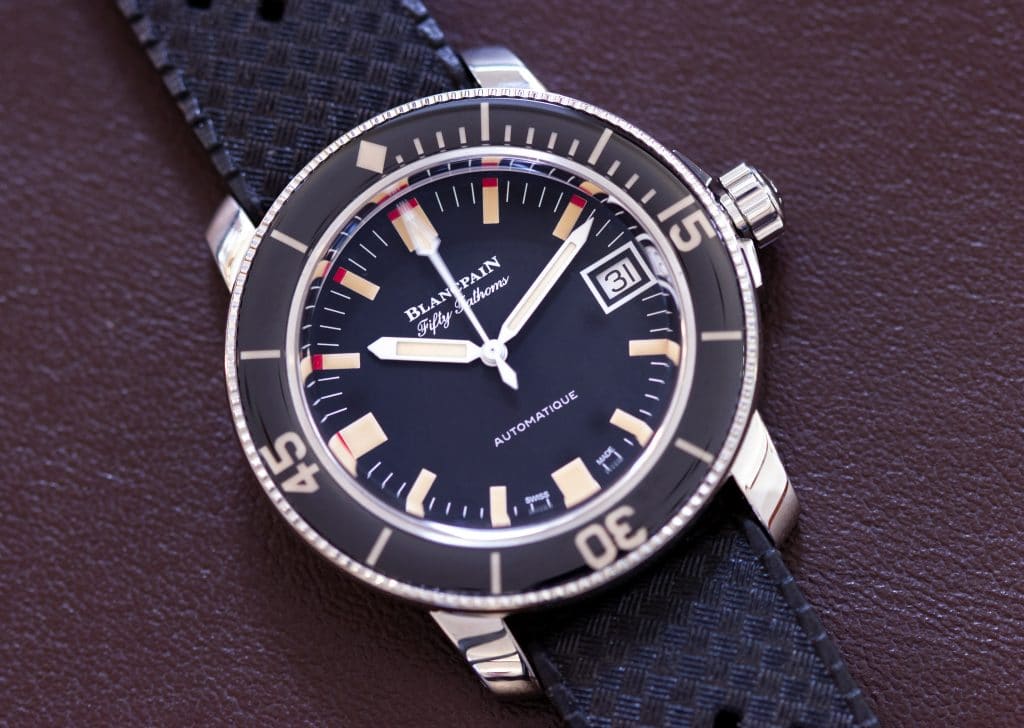 The re-edition of this watch is very handsome, like the original. Thick blocks of have replaced the hour markers on the dial which are usually small and pointy, and the lume has been given the same vintage brown tint as the Air Command. The original Barakuda was produced for the German Navy (Bundesmarine) and via their aquatic supplier named Barakuda. That watch was particularly notable for its use of red at the base of its markers on the dial. The re-edition watch also features the two-tone markers, and you can see them in a few of the photos. The domed crystal edges mean that the markers are obscured at angles, but I love that. I also love the domed sapphire crystal bezel with lume in it, a standard feature of all Fifty Fathoms watches bar the Bathyscaphe range. 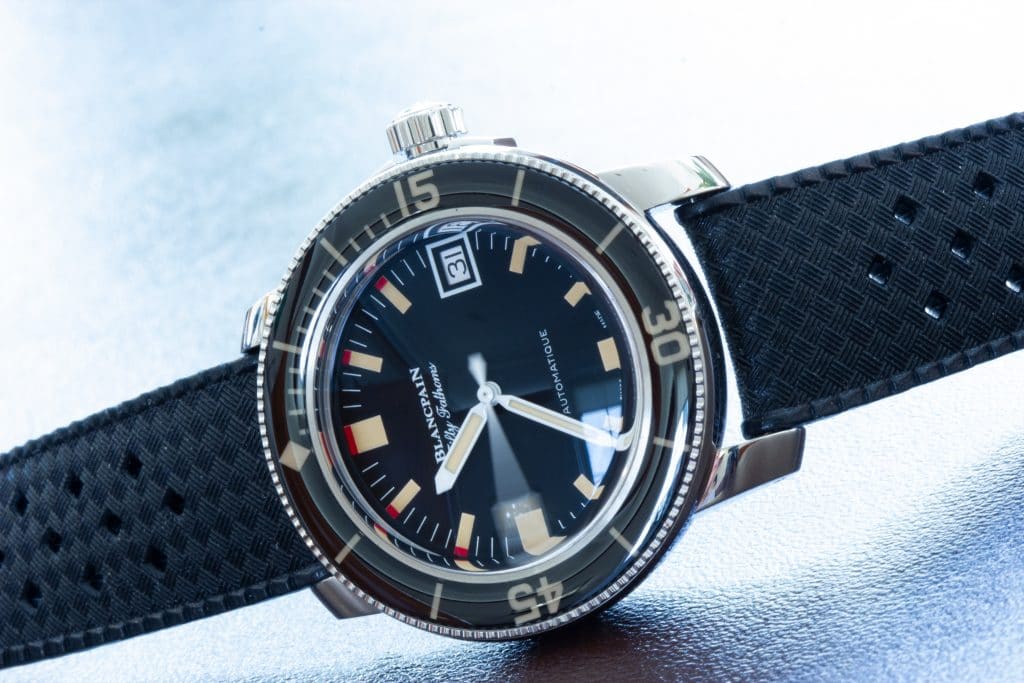 The steel case is 40.3mm in diameter, quite small compared to the standard 45mm seen in this range. At the boutique, Blancpain had out a titanium model in 45mm as well for size comparison, but I neglected to take photos of that one. Let me just say, though, that the smaller size is noticeable and welcome in some cases. This is a much friendlier watch to wear and could even be worn well as a daily, perhaps with a button shirt in some cases. 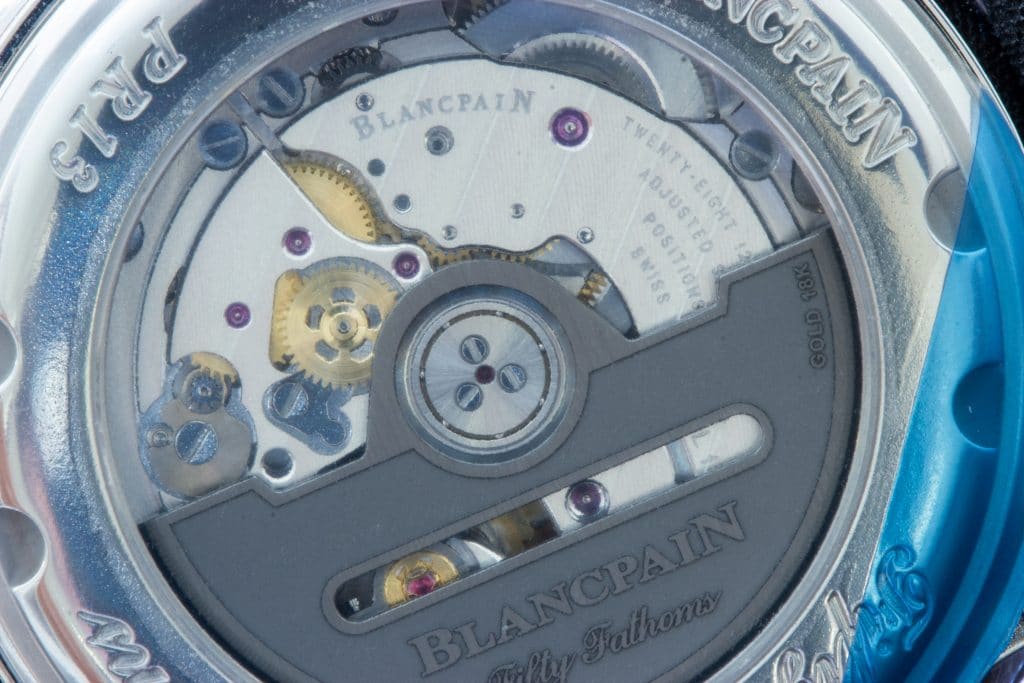 Around the back is the automatic Calibre 1151, a movement visible to the user but obscured slightly by protective plastic for us. I was a little surprised that there wasn’t the characteristic nautilus rotor like we’ve seen on other Fifty Fathoms watches, and I miss it in this case. The power reserve is 100 hours and, as you guessed from my photos, there is no hacking for the balance. Blancpain’s known for solid movements, and this is undoubtedly another one. 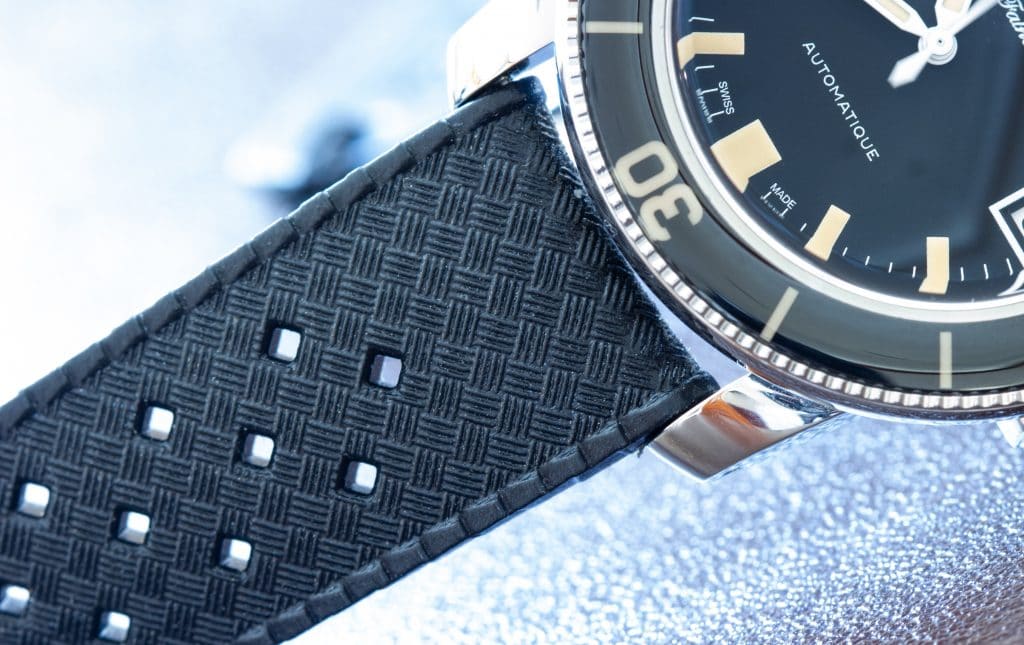 Finally, the rubber Tropik strap is slim and flexible. Compared to some straps I’ve tried, it’s extremely bendy, which means it fits the wrist well. Just bear in mind that the pattern on the strap means it will collect dust fibres and dirt quite easily when worn as a daily. The cost of this one will be $14,100 and, like the Air Command, the Fifty Fathoms Barakuda is limited to just 500 examples worldwide.