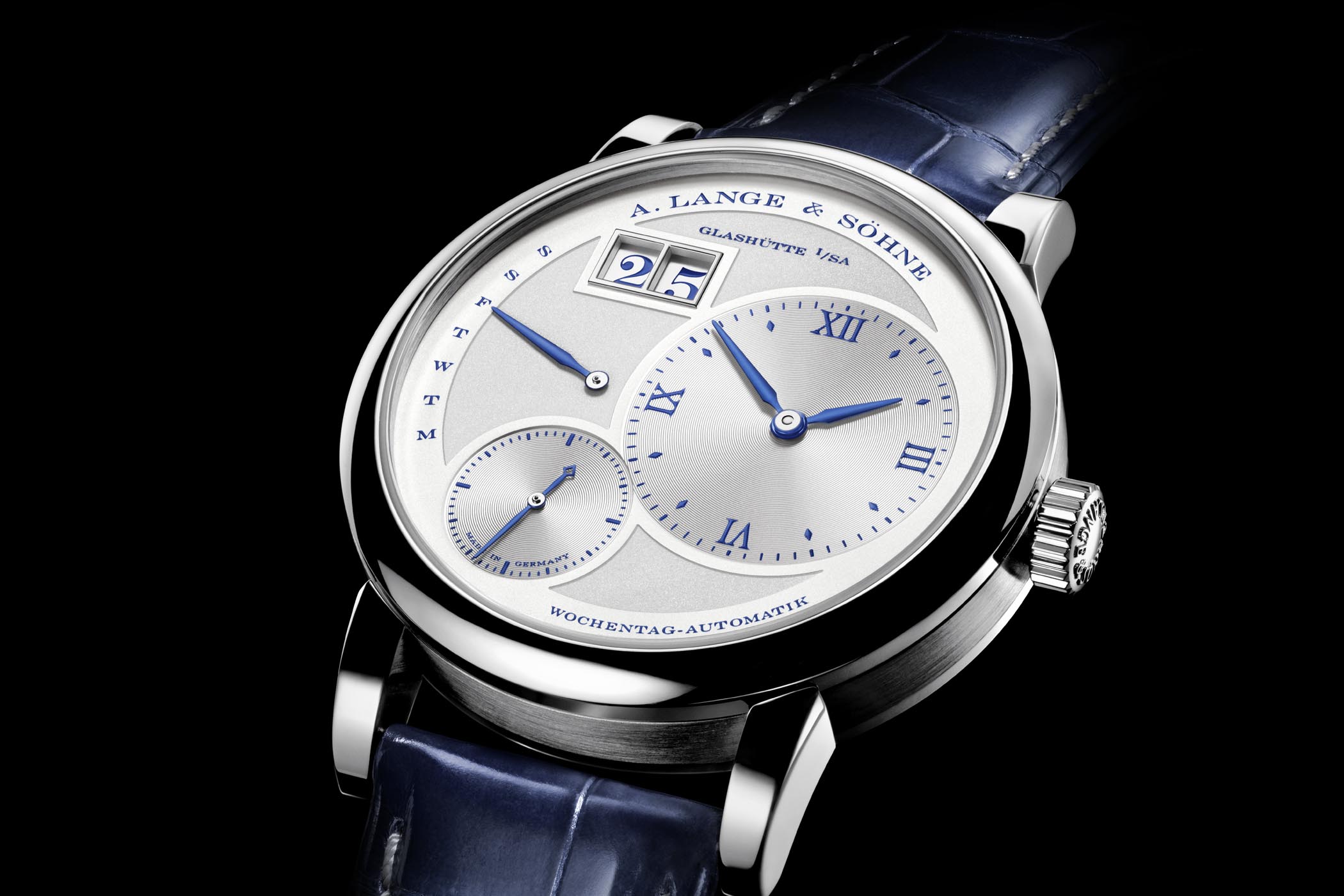 Introduced in 1994 the Lange1 is celebrating its 25th birthday this year. In this regard last week, we showed you the A. Lange & Söhne Grand Lange 1 “25th Anniversary” edition, the 7th installment of the 10-watch collection that celebrates the important landmark. And today, we are delighted to present the 8th tribute piece from the special collection, the Lange 1 Daymatic “25th anniversary”.

Lange 1 can easily be considered as one of the most daring dress watches out there. It was and is still instantly recognizable for its off-centered dial arrangement, which creates a bold and elegant statement at the same time. The Lange 1 Daymatic follows the design ethos of the traditional Lange 1 but with a slightly altered layout. First up you have the two circular displays for the hours/minutes and the running seconds which have been placed on the right instead of left. Further to that, the beautifully framed big date complication has been moved to the left to be positioned at around 11. And finally, as the name suggests you have a day indicator neatly integrated between the running seconds and the date. Also, like the previously released “25th anniversary” watches the face of this watch has been presented in silver and is well completed by blue highlights. 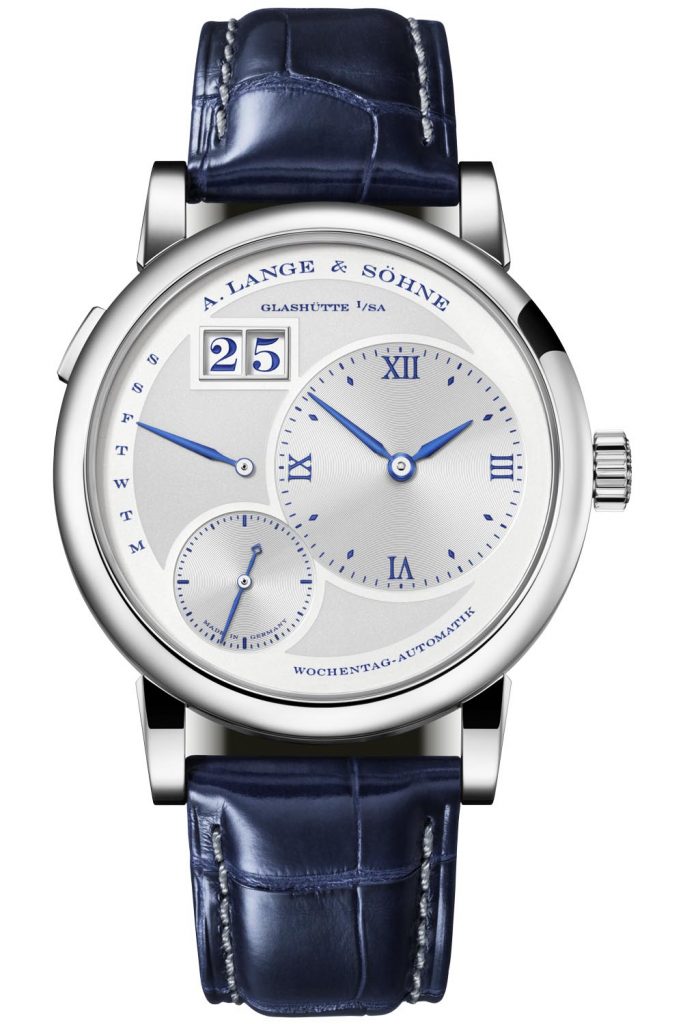 The case on this watch is crafted solid white gold, giving the watch a modern and elegant vibe. It measures a modest 39.5 mm in diameter which is a great size for a dress watch. It has been finished to a high standard like any other Lange and features a nice mix of brushed and polished surfaces. Water-resistance is marked at a low 30 meters and both front and back of the case feature a sapphire crystal. 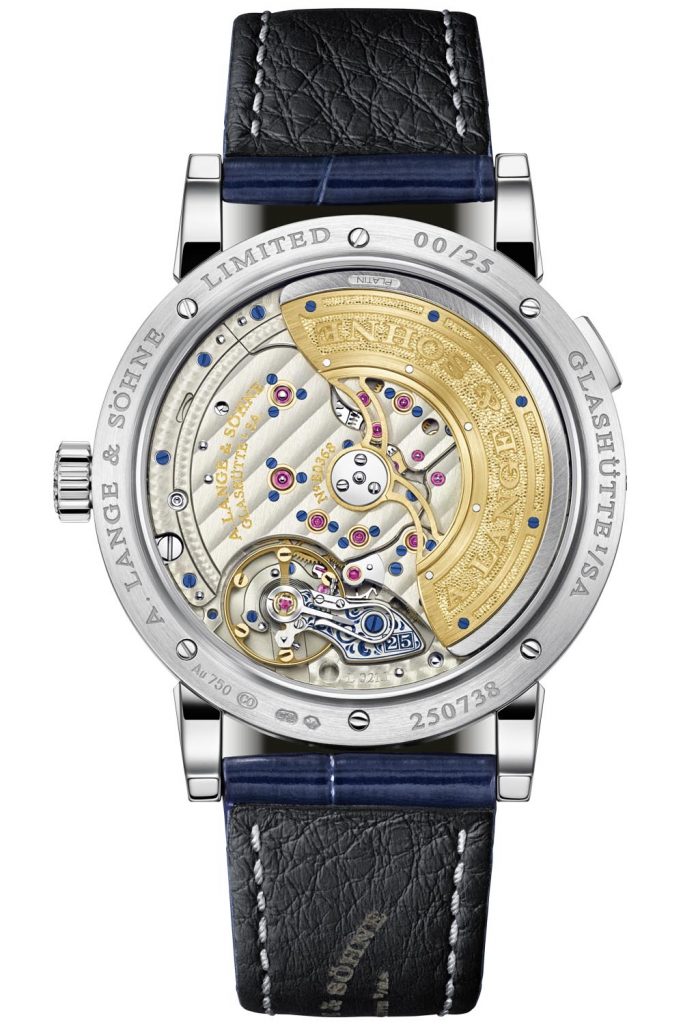 Powering this watch is A. Lange & Söhne’s in-house calibre L021.1. This is an automatic movement that operates at a frequency of 3Hz and offers a power reserve of 50 hours. The movement is visible through the exhibition case back and is a treat for the eyes. It features Glashütte ribbing on the bridges, blued screws, gold chatons, a gold-colored rotor and a beautifully decorated balance cock with the number 25 deeply engraved to signify the limited nature of this watch.

The A. Lange & Söhne Lange 1 Daymatic “25th anniversary” is yet another fitting tribute to an iconic watch. The watch would come attached to a blue alligator leather strap, is limited to just 25 pieces and would retail for EUR 44,200.