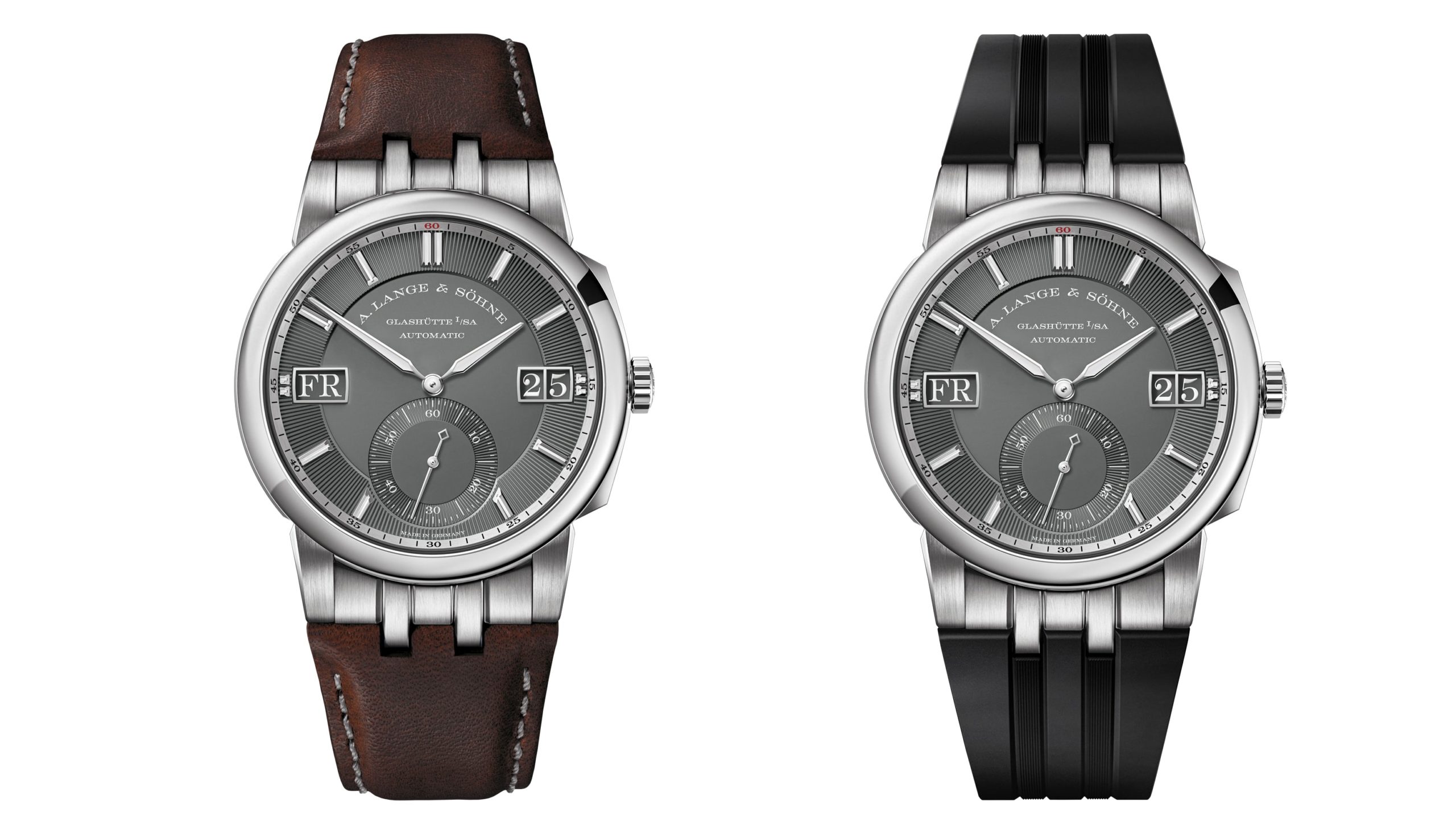 The newest range of watches from A. Lange & Söhne is now set to double in size with this new version of the controversial sports watch. Late last year, back when we could move freely, the Saxon brand invited several aficionados, including yours truly, to Glashütte to see the unveiling of the brand new sports watch from A. Lange & Söhne, the very first sports watch from them. I liked it, and was subsequently able to get a Fortnight on the Wrist with one a couple of months ago and was impressed even more. Not so impressed that I could suddenly afford to buy one, but impressed nonetheless. 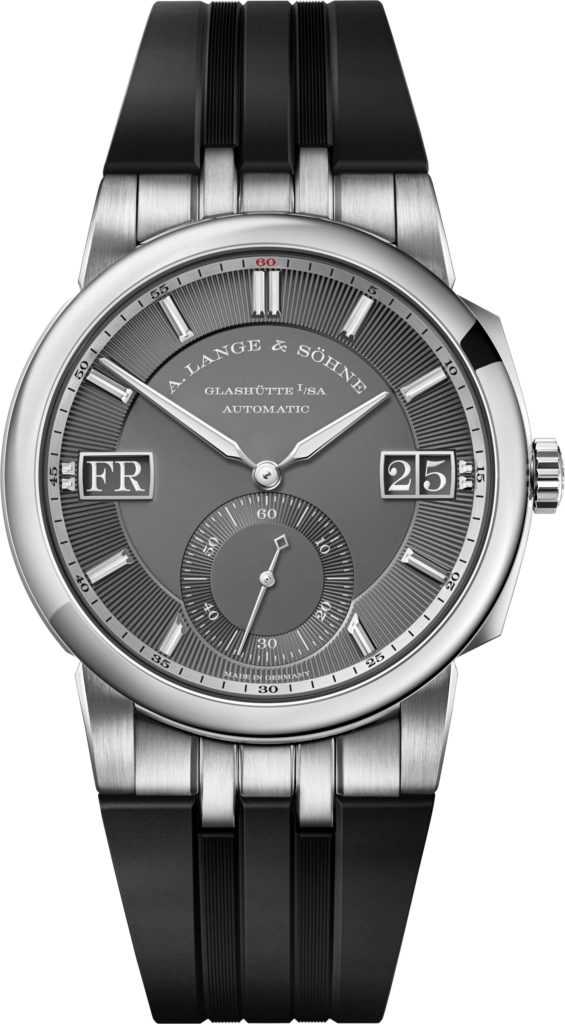 The new version looks pretty smart on a black rubber strap with grooves cut in it that seem to follow on from the lugs. The bracelet on the first Odysseus was comfortable and refined, made up of several links with polished and brushed surfaces it looked every inch a luxury bracelet. But, reading through the comments from you guys, our readers, it seems that the bracelet makes it a little too chunky for an A. Lange & Söhne. I’d argue that their watches are chunky anyway, but with a finesse nonetheless. This new watch needed a rubber strap, not only to compliment the looks and diversify the range but also to keep the weight down.

At 154 grams, the steel version was more substantial than a Rolex GMT Master II, but I have a feeling this new one, presented in 18k white gold, might be able to top that. If it had a white gold bracelet as well, then I suspect that the new Odysseus would be no use as a daily wear but a great stand-in for a dumbbell in the gym. The case proportions haven’t changed, it’s still 40.5mm in diameter and a slim 11.1mm thick, but with the added density of a gold case and gold pin buckle, it promises to be a heavy beast nonetheless. A. Lange & Söhne’s watches have a heavy solidarity to them, and that’s just the way we like it. 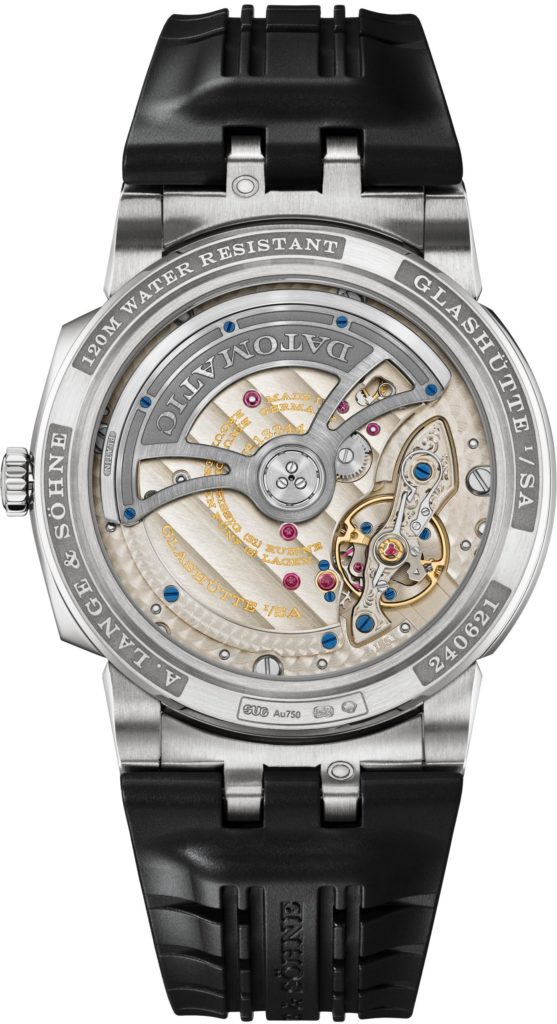 The movement inside the case, the calibre L155.1 DATOMATIC, is nearly identical to the current steel Odysseus. The only difference between them is the colour on the day and date disks, which is now grey to match the elegant guilloché dial on the new piece. The L155.1 DATOMATIC is crafted from German silver with heat blued screws and polished gold chatons. The platinum-edged rotor has been cut away so that we can see more of the Glashütte ribbing on the three-quarter plate that covers the movement, a hallmark of the region. The day and date functions are controlled by the subtle pushers on the side of the case. Although in the press photos, they stand out, in real life, they blend into their surroundings thanks to a careful mirror polish.

This movement has a few firsts for A. Lange & Söhne in it as well. Since they’ve never made a sports watch before, they’ve never needed a full balance bridge until now; a balance cock would do. Now, though, they’ve incorporated a free-sprung balance onto the bridge which protects the delicate mechanism in case of a physical shock. I wasn’t allowed to test it, but I’d hope that the movement is more rugged than those found in the Odysseus’ Swiss rivals at this price point. If it could be both as attractive (if not more so) and more robust than them, then it would make a better proposition than any nautically themed watches. 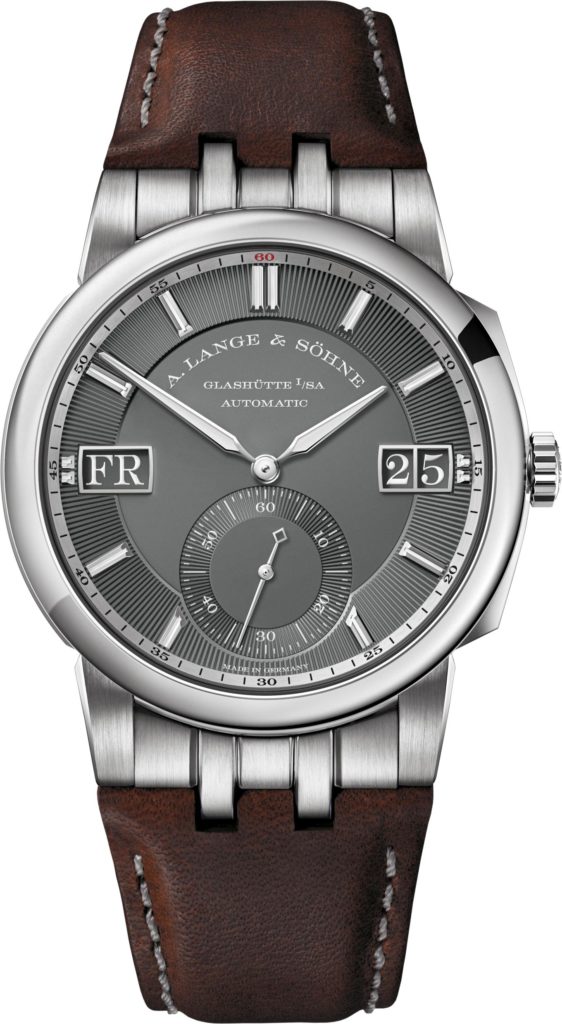 The new white gold Odysseus has a striking dial, with a sunburst-style guilloché radiating outwards on the hour scale and the track for the seconds on the subdial. At the centre is a glossy, matte surface to provide some calm in this sea of textures. A touch of colour is provided in the form of red 60 printed on the inner flange ring

The new Odysseus will come in two variants featuring either a rubber strap or a leather strap, depending on your personal taste. A. Lange & Söhne isn’t offering any disparities in its pricing for them, the price of the new white gold Odysseus is €41,500.