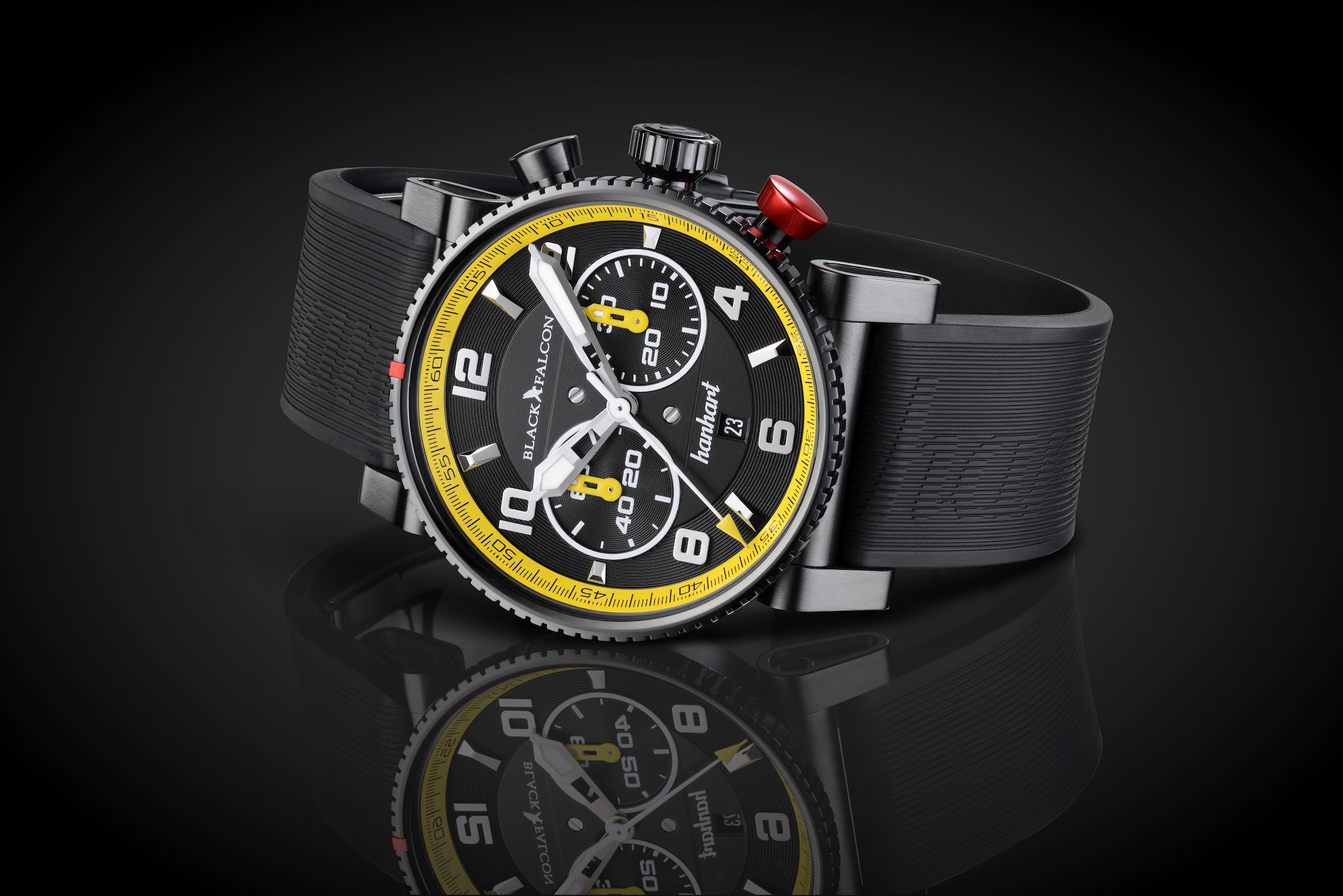 When Venturing beyond Swiss territory, German watches can easily be considered amongst some of the best possible options out there. They are solidly built with a nice fit and finish, offer competent technical specifications and at many instances are a better overall value compared to their Swiss counterparts. Hanhart is a German watch brand located in the Black Forest region of Germany and specializes in making high-quality chronograph timepieces. Their latest watch is a limited edition racing inspired chronograph called the Primus Black Falcon which is a result of brands collaboration with a young motorsport company known by the name Black Falcon. 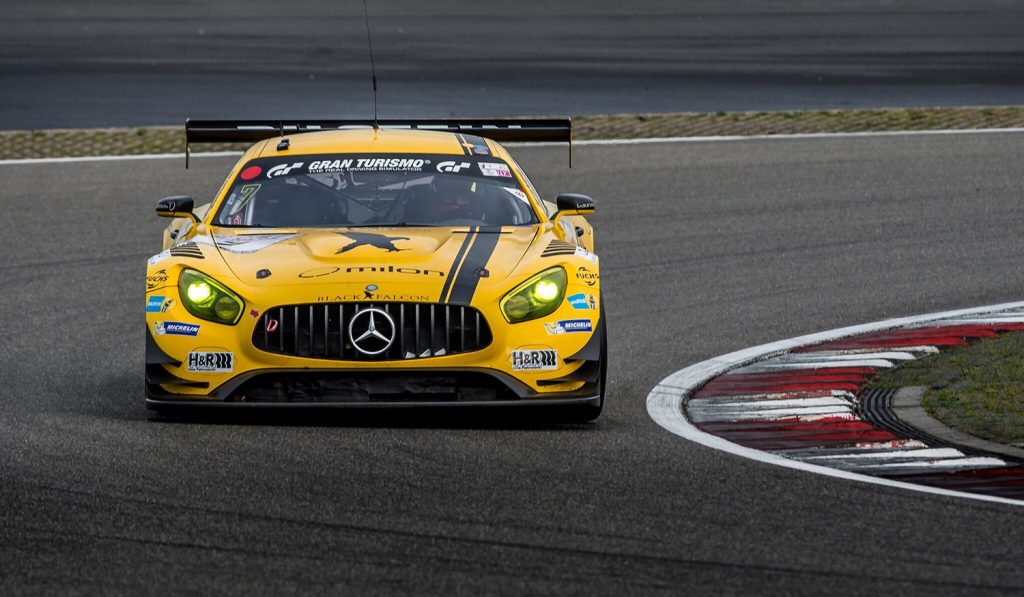 Black Falcon was founded in 2006 and while it has only been 12 years since their inception they have gone ahead to establish themselves as one of the most successful car racing teams worldwide, winning over 160 races in the last few years alone. And as timing plays a crucial role in any racing event what better than a sporty chronograph to celebrate all those victories. 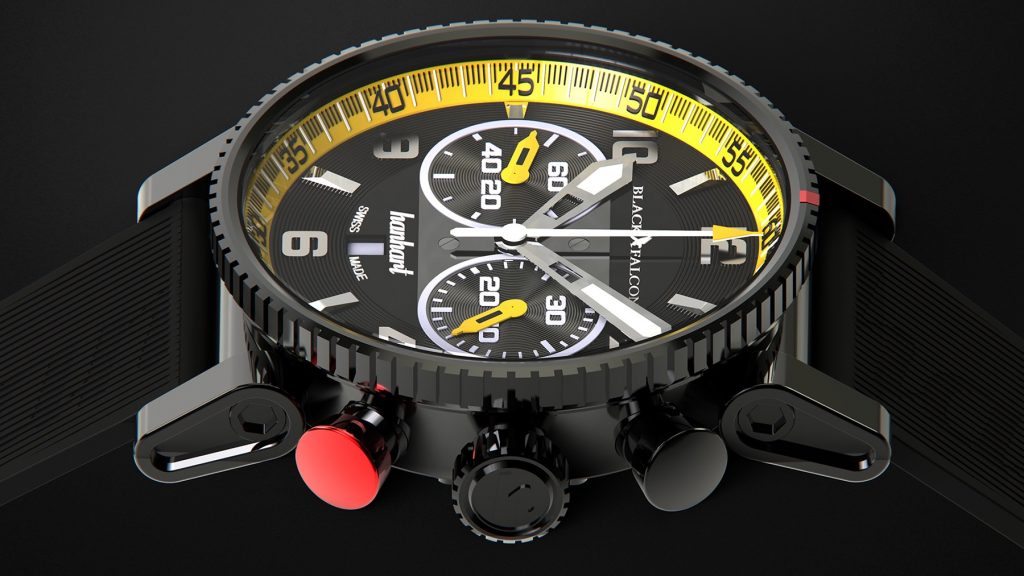 Featuring a bicompax layout, the dial on this watch is neatly laid out with a high focus on legibility and some nice motorsport-inspired touches. The hour markers are a mix of polished Arabic numerals and faceted indices and have been applied to give a sense of depth to the dial. The minute and chronograph seconds track have been presented in the form of a sloped chapter ring which along with the chronograph hands has been painted in yellow adding a nice splash of color to the dial and also highlighting the racing theme of this watch. The two sub-dials at 3 and 9 are meant to track chronograph minutes (a maximum of 30 minutes) and running seconds respectively and are nicely sized making them easy to read. There is also a date window which has been neatly executed by placing it above the numeral at 6 instead of cutting into it, hence keeping the symmetry of the dial intact. Finally making the watch special and showcasing the Motorsport ties of this watch is the ‘Black Falcon’ branding just below 12 which replaces the Hanhart logo now repositioned above the date window at 6.

Belonging to the Primus family, the Black Falcon shares its case design with its siblings being 44mm wide and 15mm thick. That said, don’t let those dimensions dampen your spirit as Hanhart has showcased some clever engineering skills here by giving the angular lugs some flexibility to move up or down. This allows the wearer to adjust the watch as per their wrist size and is also something that gives this watch a unique identity. The stainless steel case has been fully DLC Coated which gives the watch a stealthy look and also complements the colored accents really well. Being a chronograph, the case is flanked by two extra pushers at 2 and 4 to operate the chronograph functions, with the pusher at 4 painted in red which has been a distinctive trademark on Hanhart watches since 1939. On top of the case is a fluted bi-directional friction bezel with a red marking which once again is a signature element of Hanhart watches and can be used to measure lap times.

Powering this watch is Hanhart’s automatic chronograph caliber HAN3809 which is basically a modified Valjoux 7753 movement with a customized rotor having a skeletonized Hanhart logo. The movement beats at a frequency of 28800 bph offering a power reserve of around 42 hours. The sapphire crystal exhibition case-back gives a nice view of the complicated internals, but we certainly think that the movement is a little industrial looking and Hanhart could have done a better job in decorating it. 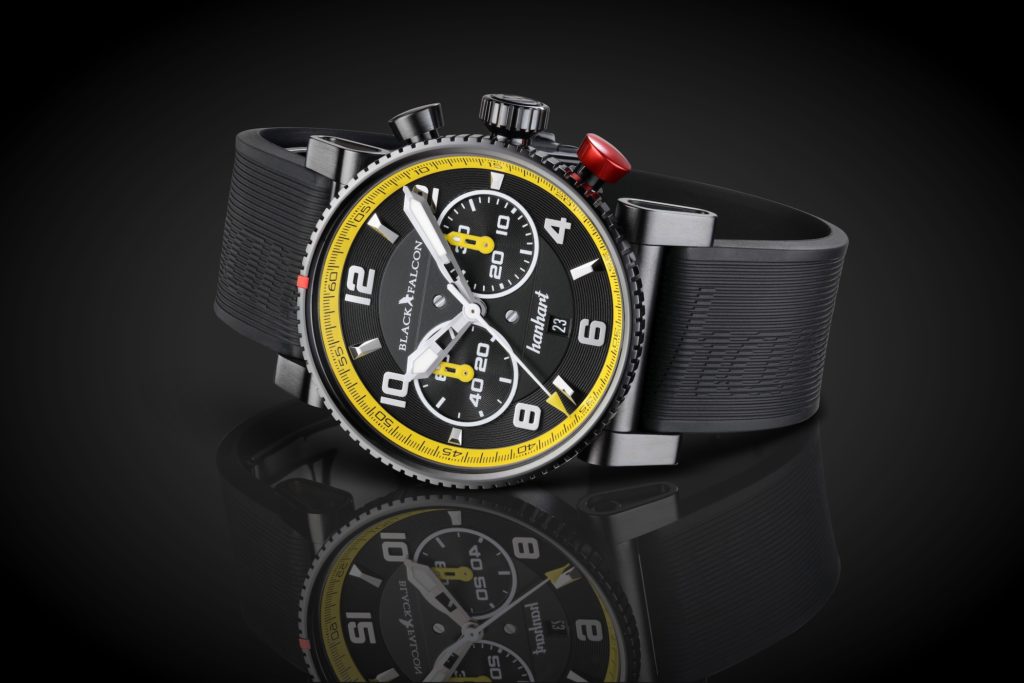 The Hanhart Primus Black Falcon is a bold looking modern chronograph influenced by the world of motorsports and targeted towards all the Black Falcon fans out there. So, in case you are among one of them act quickly as only 111 pieces of this watch would ever be made. Every watch would come fitted with a black vulcanized rubber strap and would retail at a price of EUR 3,290. Visit Hanhart here.