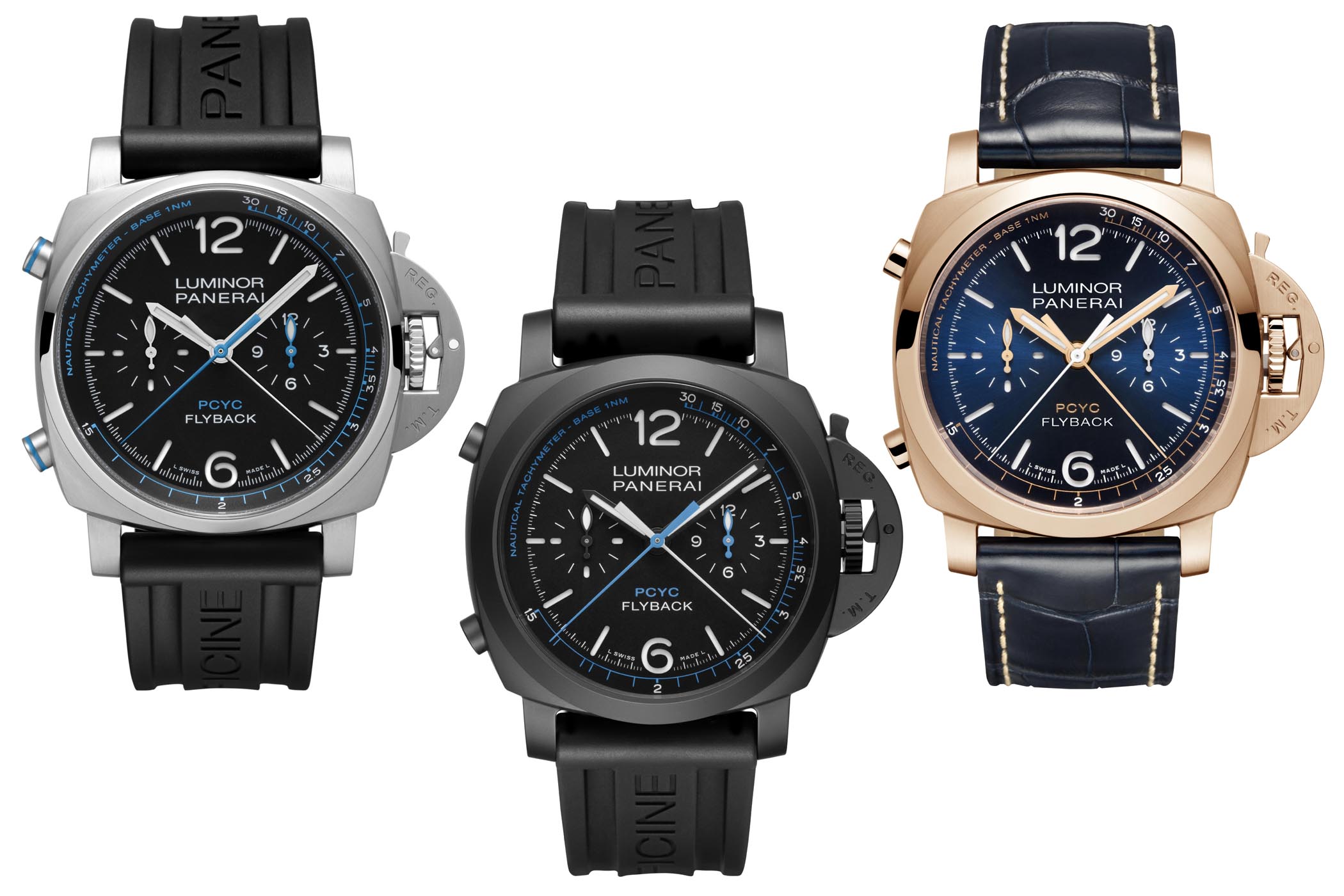 Having been the official supplier of watches to the Italian Navy, Panerai has a rich marine history, which also makes it easier to explain the brand’s affinity towards water sports. Panerai has been a big supporter of yacht racing for a while now and has released quite a few watches inspired by the sport in the recent past. For 2019 the brand is continuing its association with the water sport by introducing three new nautically inspired Panerai Classic Yacht Challenge chronograph watches (Ref. PAM00764, PAM00788, and PAM001020). Featuring a 44mm case, these new watches combine a bold modern design with a nice dose of functionality. But before we look at what separates them from each other, let’s have quick look at what common between them.

As mentioned above all the three watches come with a 44mm cushion styled case which is an integral part of Panerai’s design ethos. The right-hand side of the case is flanked by the brands signature crown assembly whereas on the left-hand side you have 2 pushers at 10 and 8 which can be used to start and actuate the flyback function respectively. The dial has a sandwich style construction with the main dial being cut out to expose the layer of super luminova beneath it. This helps in giving the dial a nice sense of depth and also makes it a breeze to read the time when one happens to be in a dimly lit environment. The hour markers are a mix of cutout batons and Arabic numerals at 12 and 6, whereas the chronograph minutes/seconds have been presented in the form of printed hash marks on the outer periphery of the dial. Powering these watches is Panerai’s Caliber 9100, which is an automatic column wheel based chronograph movement with a flyback mechanism and operates at a frequency of 4 HZ, offering a power reserve of 72 hours. Technical details aside what makes this movement special is that it leads to an interesting dial layout by allowing to track the chronograph minutes and seconds through the centrally mounted hands along with nicely balanced bicompax setup to track the elapsed hours and running seconds at 3 and 9 respectively. Finally completing the dial is a nautical Tachymeter scale which has been graduated in knots instead of the km/h or mph scale found on motorsport-inspired watches. With shared information out of the way, let’s now look at the three watches individually. 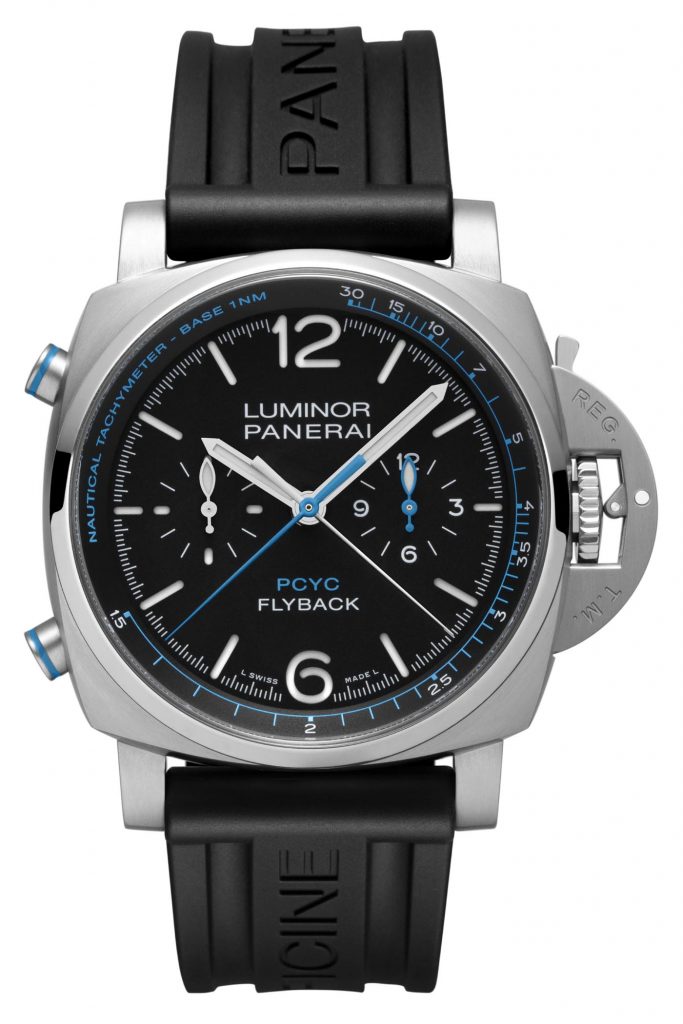 This PAM00764 can easily be considered as the sportiest of the new Luminor Yachts Challenge Trio. It features a case made out titanium which is not only stronger but also significantly lighter as compared to stainless steel, making it a great choice for a sports watch. Another interesting detail worth mentioning is the blue accents which have been used throughout the watch to segregate the chronograph functions from standard timekeeping functions. So you have the hour, minute and running seconds hand rendered in polished metal whereas the chronograph minutes, hours and the tachymeter scale have been presented in blue. The blue color coding also extends to the case wherein the chronograph pushers feature a blue circular ring. The case is water resistant to 100 meters and features drilled lug holes should you wish to change the black rubber strap that watch comes fitted with. The PAM00764 would retail at a price of EUR 12,000. 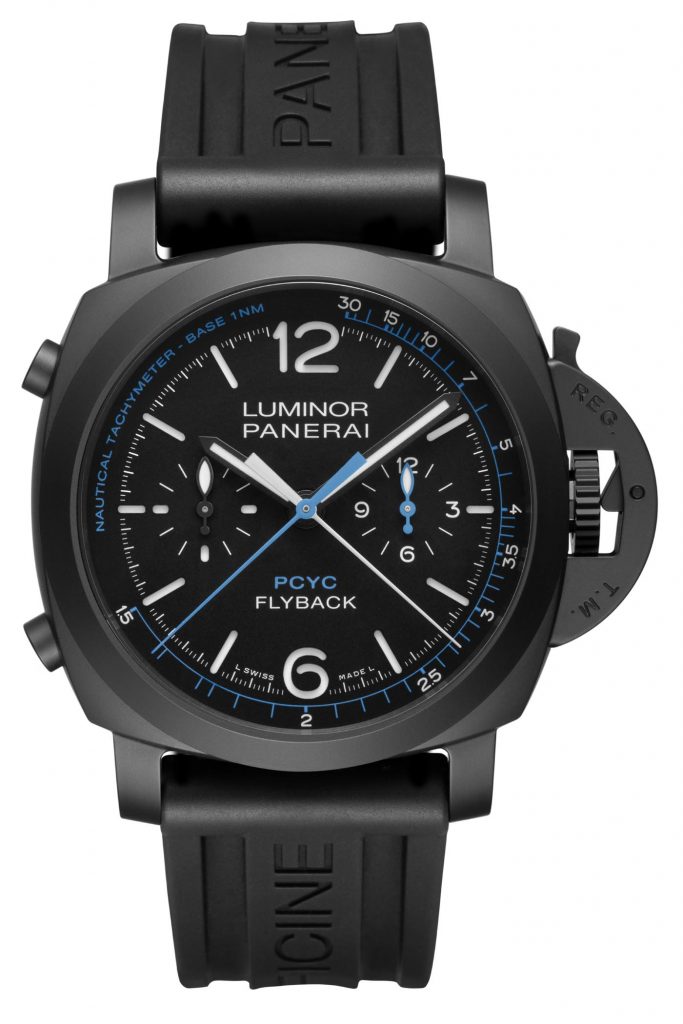 The PAM00788 is technically the same watch as the PAM00764 and is also quite similar as far as the dial layout, but still manages to look significantly different courtesy of its all black case. The entire case (including the trademark protected crown mechanism) on the PAM00788 has been made out of matt black ceramic and this gives it a stealthy look combined along with the black rubber strap. The blue highlights are still present but seem to stand out better against the matt black dial and case. There is also a subtle difference in the dial implementation wherein the tachymeter scale has now been printed on the dial itself as opposed to being printed on the outer flange as seen on the PAM00764. The PAM00788 is also water resistant to 100 meters and would retail at a price of EUR 15,500. 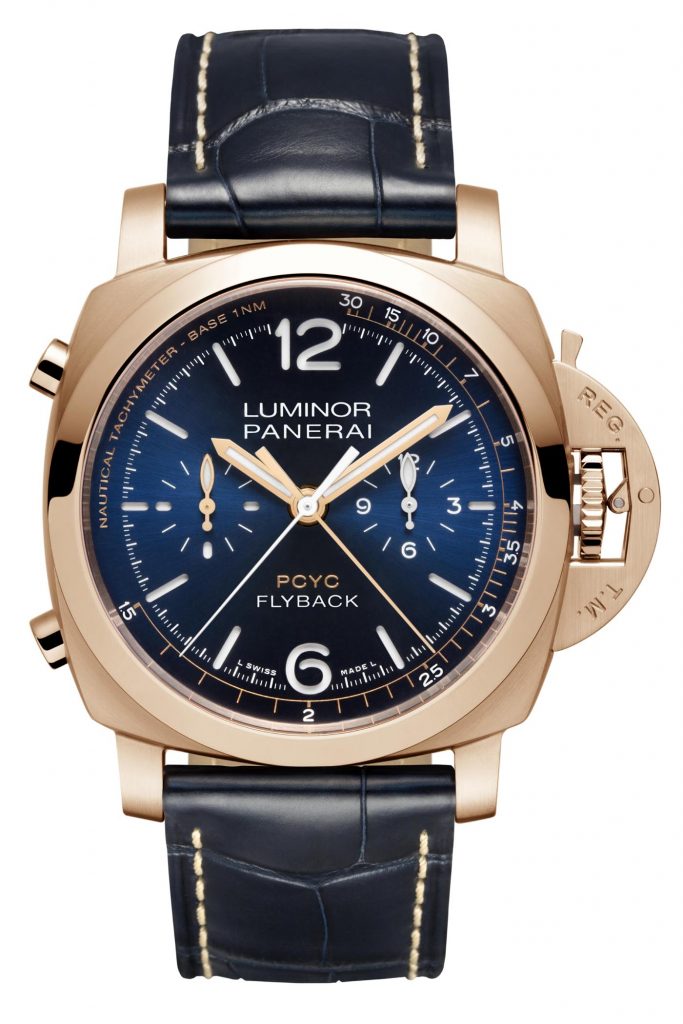 The PAM001020 takes the sporty aspects of the previously discussed models and blends them with some nice dressy elements. Firstly, the case on this particular reference is made out of brushed and polished 5NPT gold which gives the watch a warm appearance. Next up is the sunburst blue dial which is a big departure from the matt black dial on the previous models, but looks stunning providing a nice contrast against the gold case and also ties in well with the marine theme of the watch. Interestingly, the chronograph indications on the dial of the PAM001020 have also been rendered in a golden color to match the color tone of the case. The case on this watch is water resistant to only 50 meters and features a sapphire exhibition case back as opposed to the closed case backs found on the PAM00764 and PAM00788. The PAM001020 comes attached to a nice looking leather strap and would retail at a price of EUR 27,500.