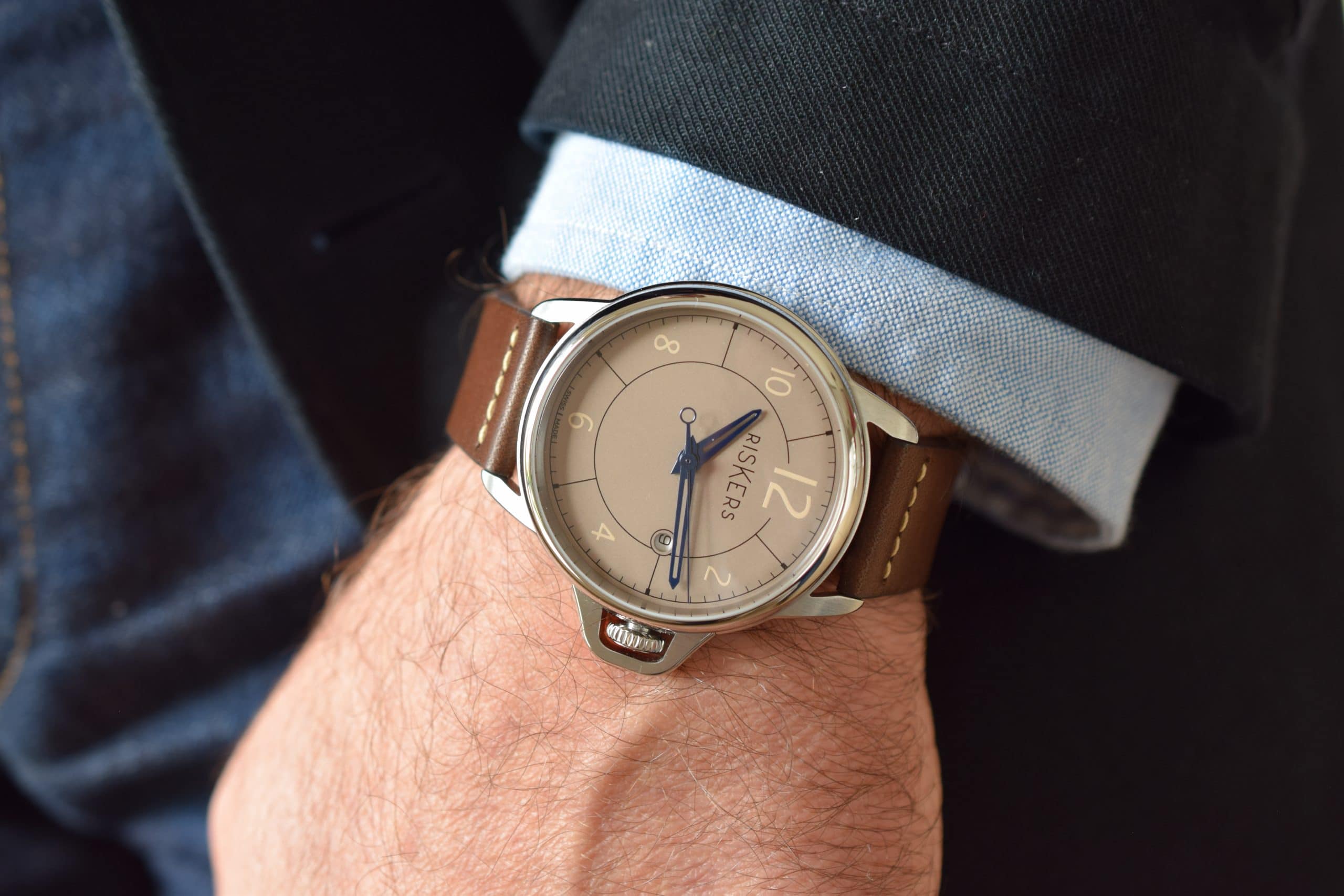 With a rapid surge in the number of microbrands, these are great times for the budget-friendly watch enthusiasts out there and we are certainly one them. While we at Wristreview certainly love talking about the big boys out there, we are consistently looking for watch brands that offer a great bang for your buck. So, on that note, we would like to present Riskers, a new French watch brand that celebrates bravery and has just gone live on Kickstarter with their First watch which is inspired by trench watches worn by soldiers during World War 1.

Inspired by the acts of bravery and heroism committed by ordinary people Riskers was created with the intent to pay a tribute to all those people who risk their lives to safeguard others. To create their first watch the brand has gone back to a time in history when wristwatches, as we know of them today, were rare and time-telling was taken care of by pocket watches which was not at all a bad thing but a little too cumbersome to handle for someone who is battling it out in the field. As a solution to this, trench watches, which are a big design influence for the new Riskers watches were created by soldering lugs to the sides of a pocket watch so that it could be strapped easily onto a soldier’s wrist and they could do their job without getting distracted. Now that we are over with the background let’s move on to the watch itself. 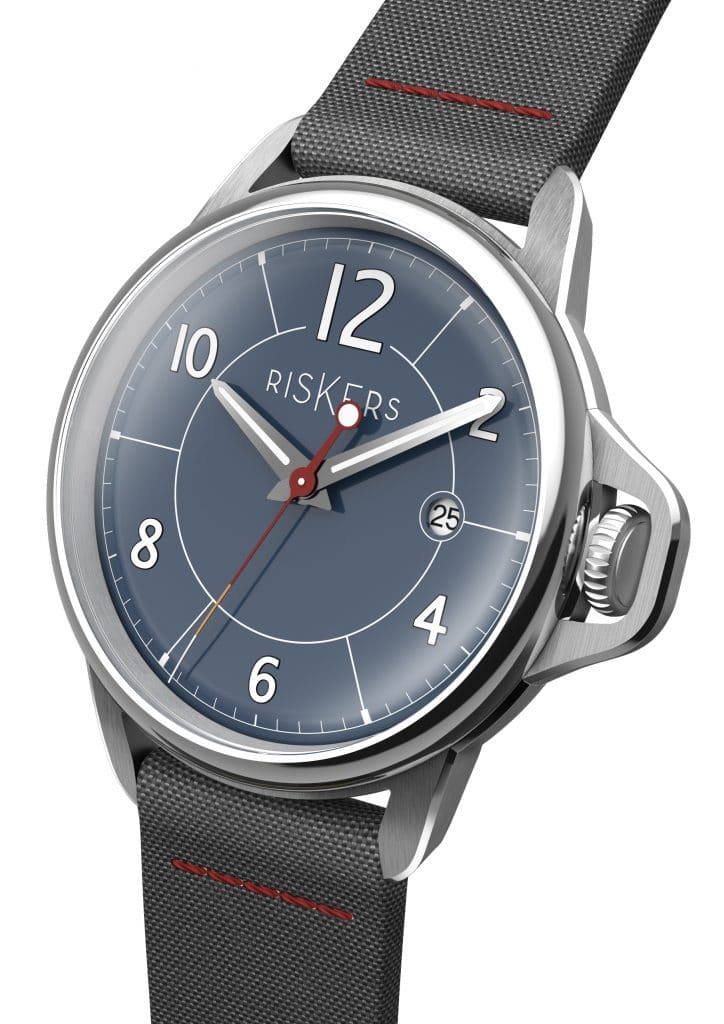 The most attention-grabbing aspect of the new Riskers watch is the case which has nice military appeal. Constructed from stainless steel it has a diameter of 43mm and a is 12.35mm thick, a combination that should result in a ton of wrist presence. The case is dominated by satin-brushed surfaces that give it a rugged tool watch like vibe but at the same time, the polished bevels on the sides provide it a sense of sophistication. 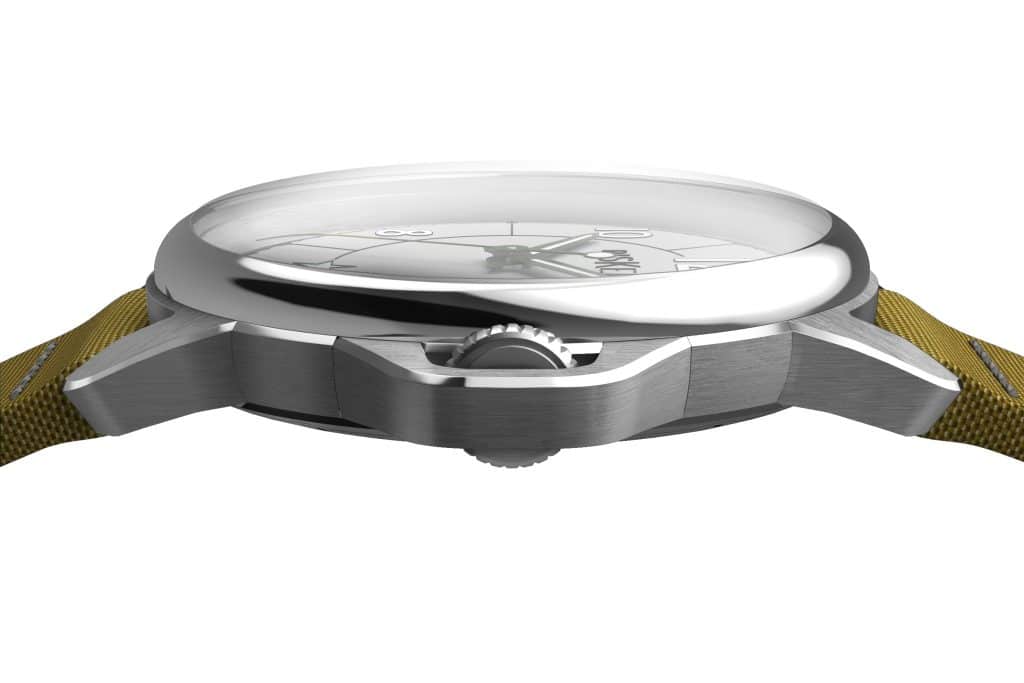 While not exactly similar, the lug structure has an interesting design that is reminiscent of the wired lugs found on trench watches from the past. Another visually engaging detail is the uniquely designed crown guard that draws heavily from the historic pocket watches and provides enhanced protection by encompassing the entire crown. Sitting on top of the case is a domed sapphire crystal and the case back has been kept closed to support the 50-meter water resistance. 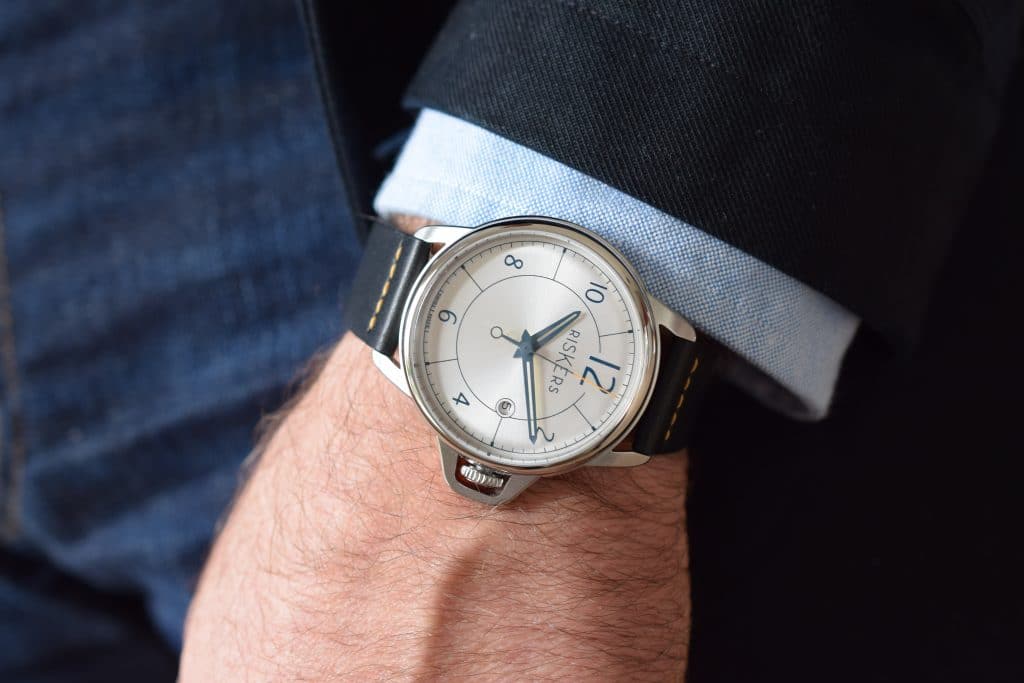 Just like the case, the domed dial emits a nice vintage vibe and is the brand’s take on military watches from the past. It has a sector style layout and comprises of two sections. The inner-circle consists of the hand stack, company branding and a circular date window at 3. The outer circle features alternating Arabic numerals with an oversized numeral at 12 and a minute track that connects the two sections at intervals of 5 using thin elongated lines. Time can be read using the rocket style hour/minute hand and a simple stick with a circular counterbalance for seconds. Overall the dial layout is clean and highly legible just like a military watch should be. While we are discussing the dial, it is worth noting that Riskers is using the same dial layout with slight design tweaks to create 4 new watches with different flavors and interestingly all watches support a noble cause in real life. 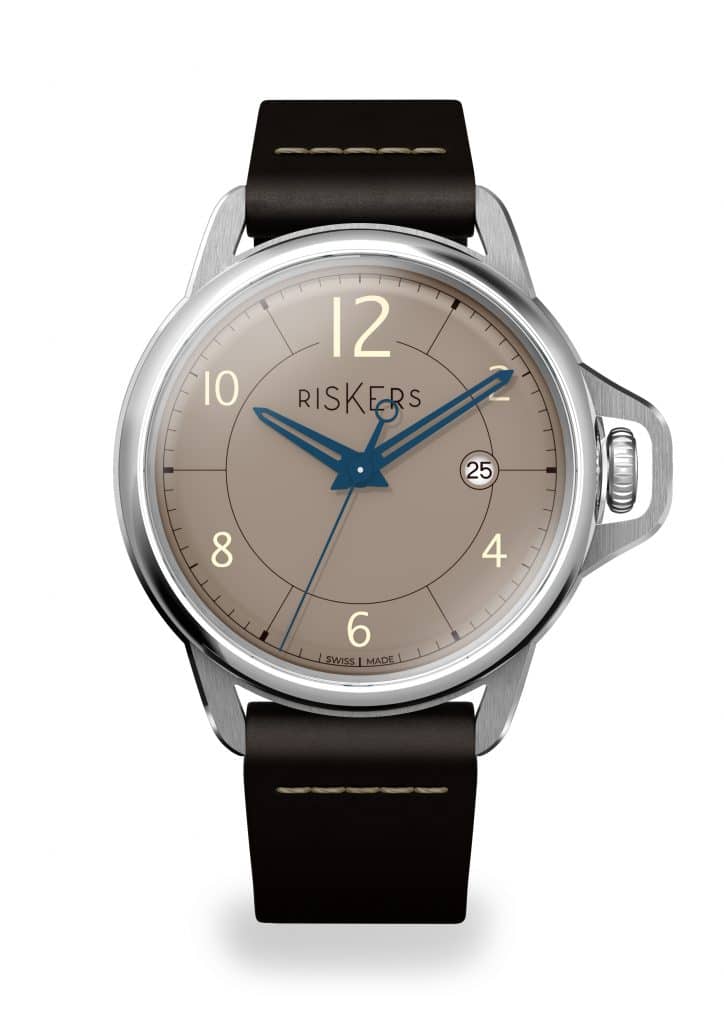 So, first up is the Prolog 1 that features a warm Taupe colored dial with applied numerals. The hands are skeletonized and thermally blued and it comes attached to a brown leather strap. This watch supports the L’Œuvre Nationale du Bleuet de France, an association that helps, veterans, war widows and soldiers wounded in peacekeeping operations. 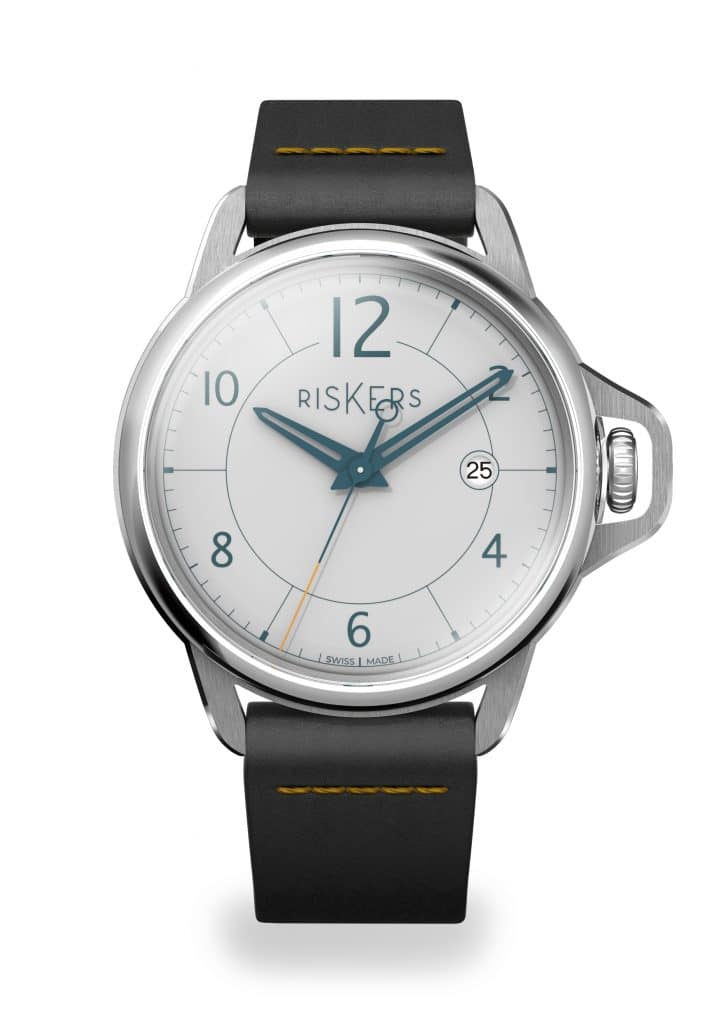 Next up is the Chapter 1. This one features a more subdued silver dial which has been nicely complemented by printed blue numerals and a blued openworked handset. There is a nice splash of yellow color which can be seen on the tip of the second’s hand and the stitching on the grey leather strap. This watch supports the NGO Enfants du Mékong (Children of Mekong) run by Guillaume d’Aboville. 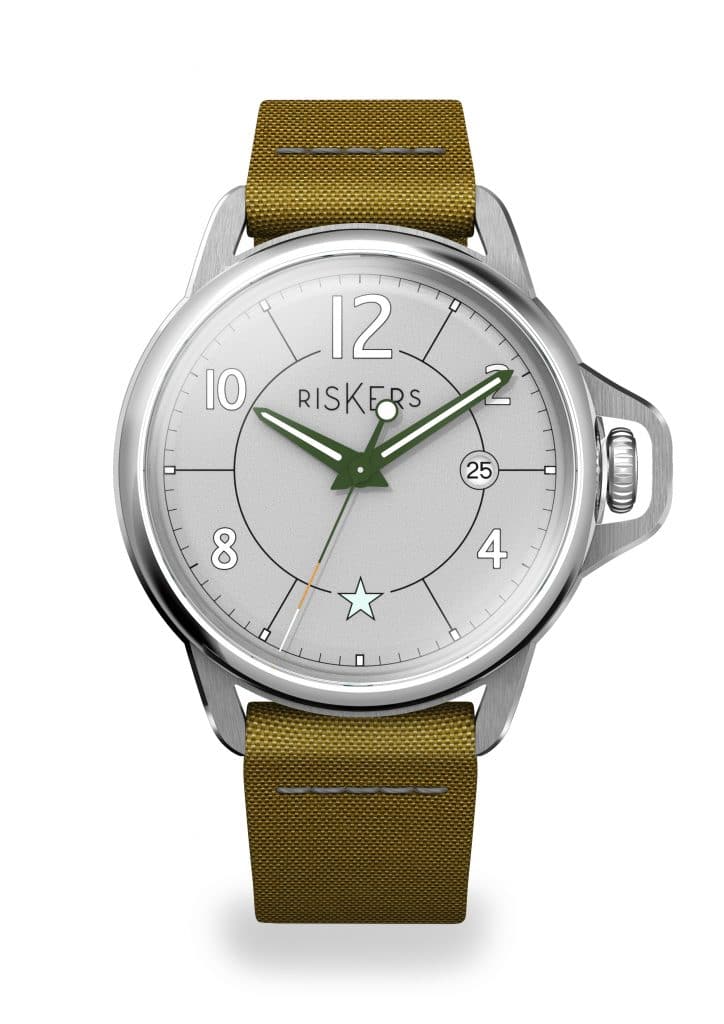 The third watch from the new Risker collection is the Chapter II which is the result of a collaboration between Riskers and a military brigade called “Troupes de Montagne” aka Mountain Troops. This one bears the most tactical look out of the lot courtesy of its sand-blasted grey dial with olive green accents. The indexes on this piece have been painted with Superluminova for enhanced low light visibility and it comes attached to a rugged beige canvas strap with grey contrast stitching. The cause supported by this beautiful model is ‘Entraide Montagne’, a non-profit organization that supports the families of the mountain troops. 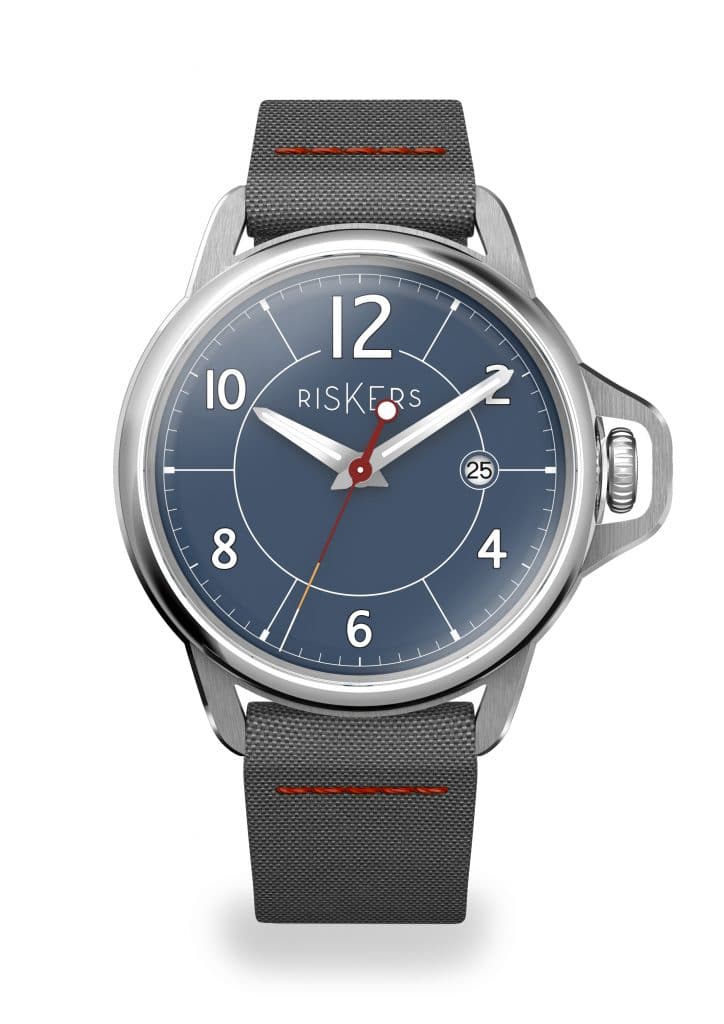 And lastly, we have the Chapter III. This variation comes with a nice deep midnight blue colored dial and has applied numerals like the Prolog1 which have also been coated with Superluminova for improved low light visibility. The hour and minute hands have been rendered in silver and the second’s hand has been presented in a mix red, yellow and white. This watch supports the NGO Douleur Sans Frontière (Pain Without Borders). 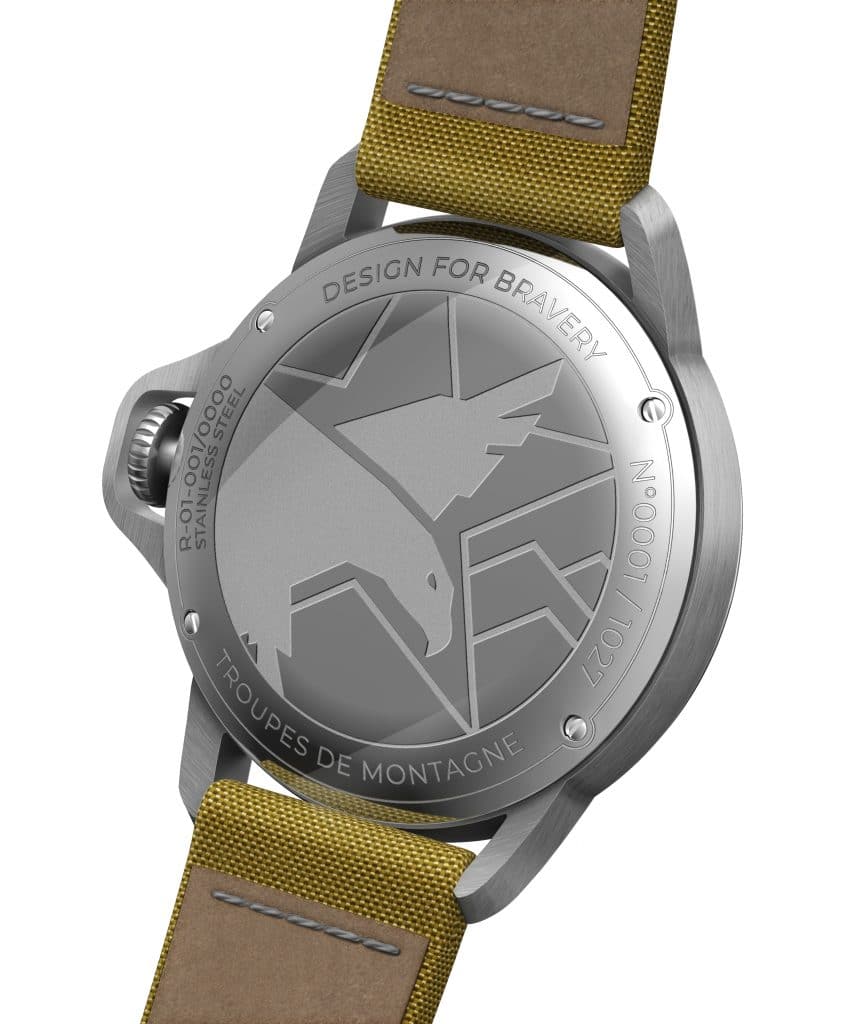 Powering these new watches are Swiss automatic and quartz movements. The Prolog 1 and Chapter 1 would be driven by the Self-winding STP 1-11 movement. This is a clone of the ETA 2824-2 and operates at a frequency of 4 Hz offering a power reserve of around 44 hours. For the Chapter II and Chapter III Riskers has gone with the Ronda 715 Quartz movement which is highly accurate and helps keep the cost low.

As of writing this article, Riskers has already gone live with its Kickstarter campaign. The price for the automatics has been set at EUR 1,190 whereas the quartz models can be picked up for EUR 490.