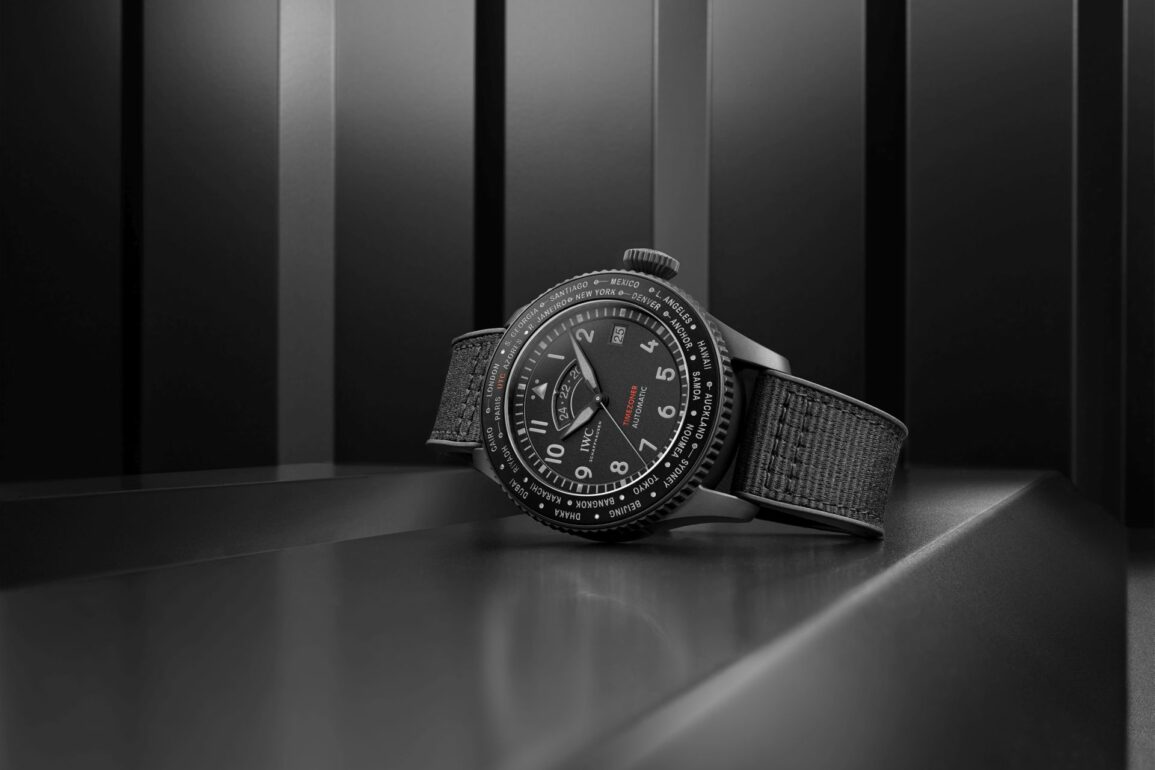 IWC gives two of its finest the TOP GUN treatment.

For me, IWC watches are a bit hit or miss. Well, to be honest, they miss more than they hit. I don’t know what it is about them, but they just present themselves wrongly to me. I don’t feel the excitement from most of their watches that I think I should. Naturally, there are some exceptions to this (I’m not a heartless monster after all). I like their perpetual calendar models, mainly the Portugieser and the long-gone Portuguese range. I also tried on a Portugieser Chronograph ref. IW371605, which I felt and looked great, so there’s hope for a relationship between IWC and myself yet. 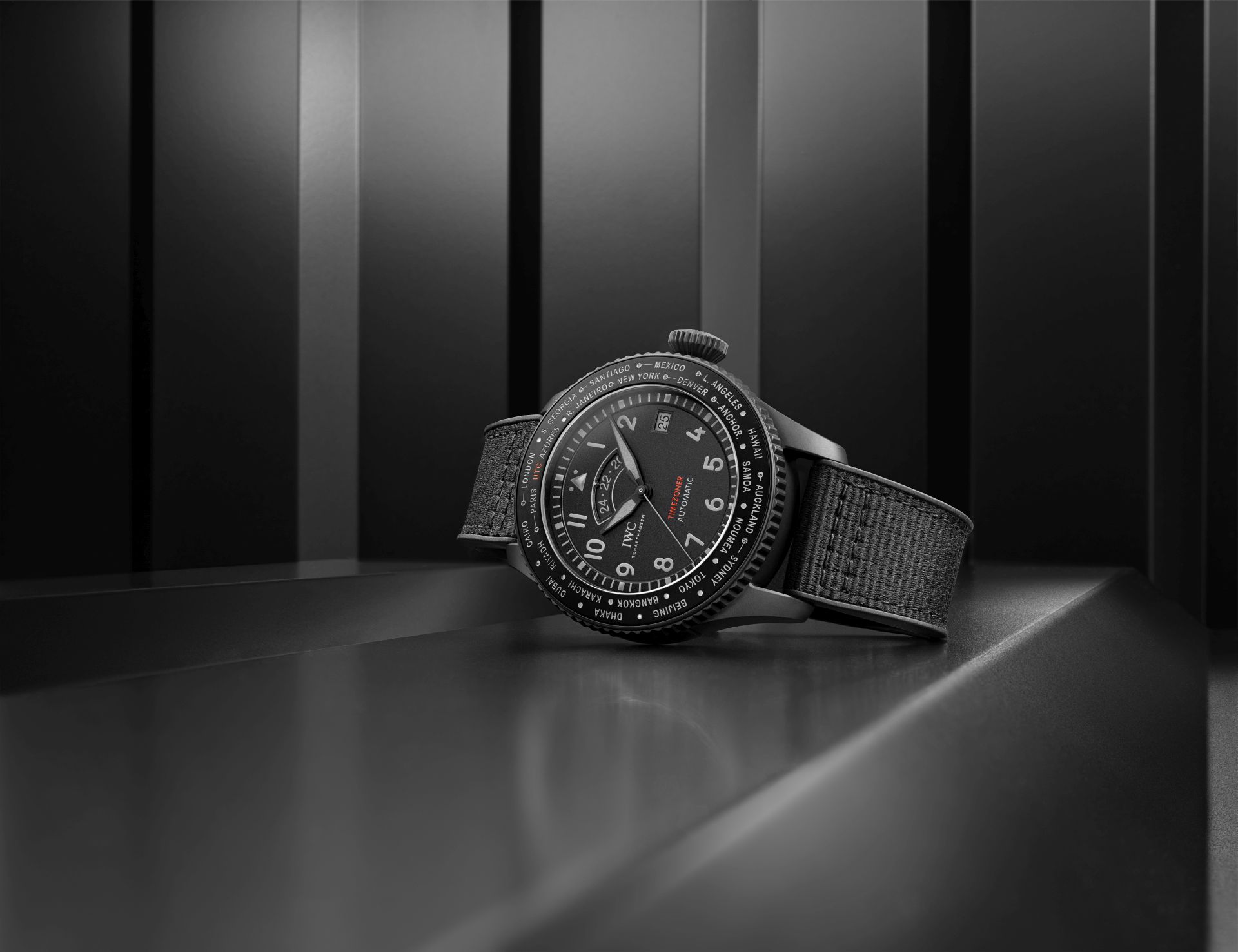 Two new watches also look, to me, quite promising. They’re both TOP GUN editions of existing IWC models. The first is the Pilot’s Watch Timezoner TOP GUN Ceratanium (ref. IW395505). A bit of work is needed on the naming, but it looks good. This is the first time that the TOP GUN moniker applies to IWC’s Timezoner model. 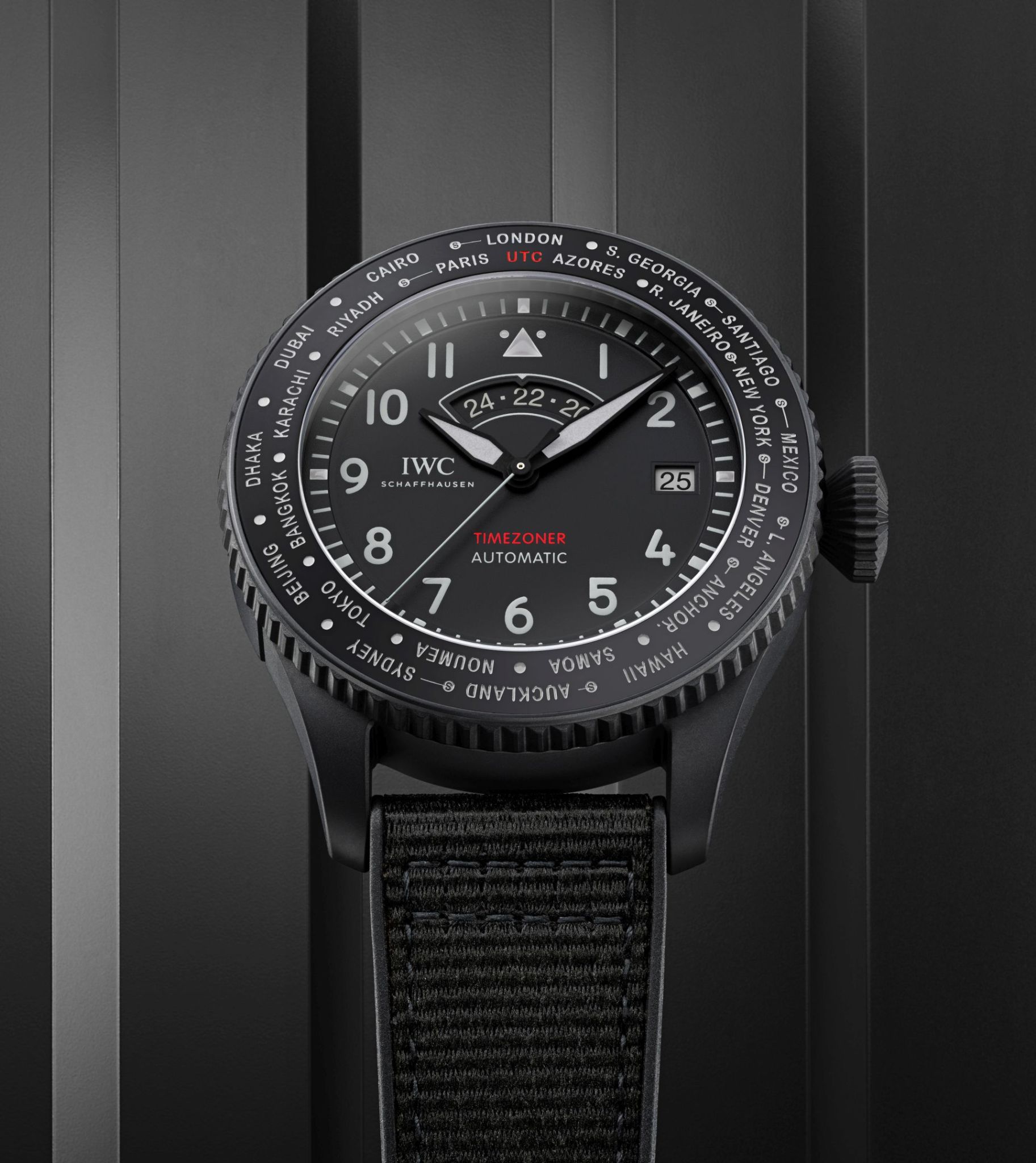 We’ve covered the Timezoner a little bit before, but just as a recap, this watch is a GMT watch, but it uses a design developed by watchmaker Micael Vogt and refined by IWC. It’s more or less like Rolex’ Ring Command bezels on the Sky-Dweller and Yachtmaster II, in that manipulating the bezel adjusts parts of the movement and dial. In this case, pressing down evenly on the bezel couples it to the GMT ring at 12 O’clock. Moving the bezel forwards or backwards (depending on the timezone you’re travelling to) also moves that display back and forth. It’s clever, and it means you don’t have to fiddle around with a crown or even take it off your wrist. There’s also a date window for convenience. 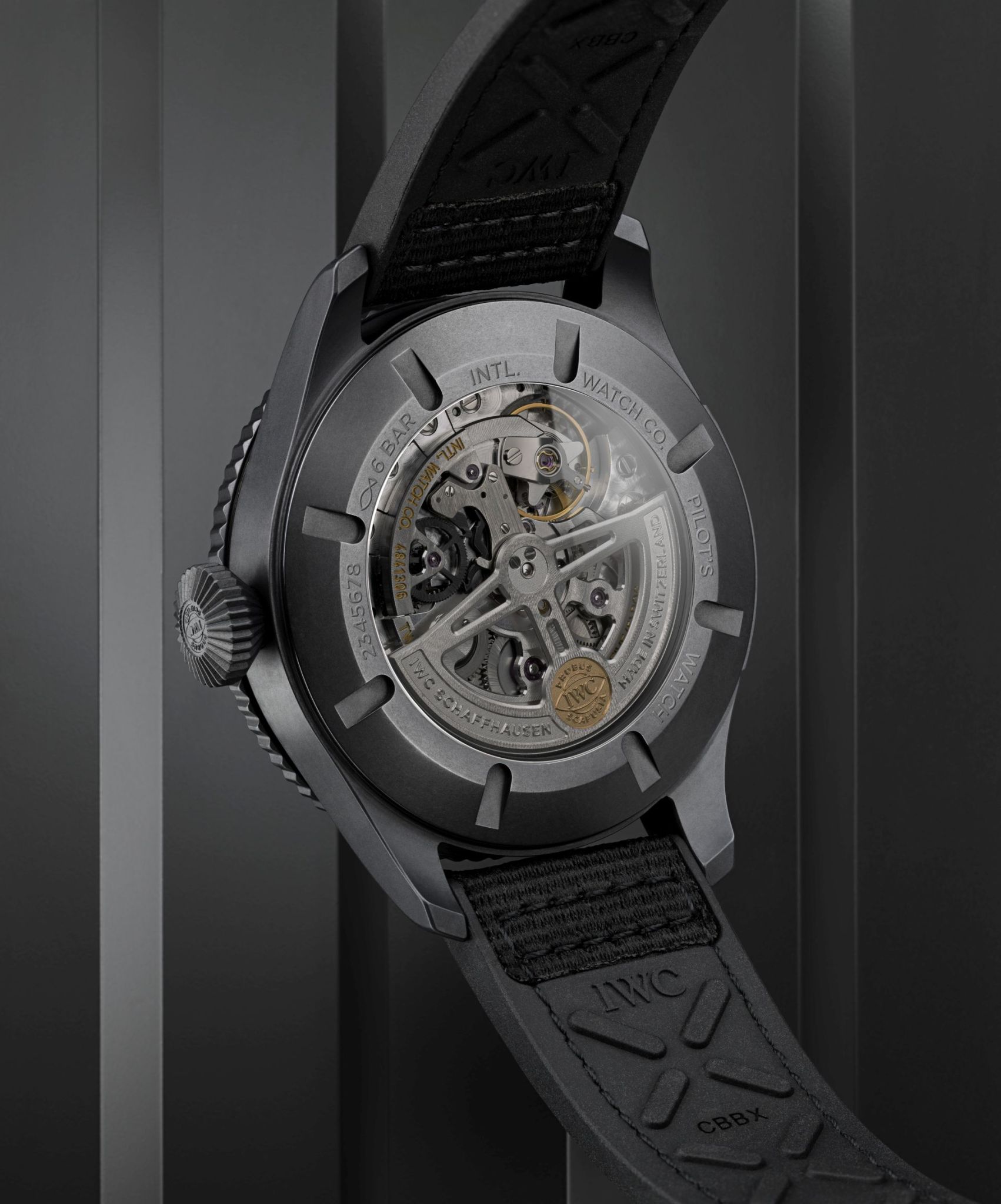 The TOP GUN edition is mostly blacked out with a matte black case and matte black dial. I’ll come back to why the cases of both these watches are special later. This watch measures 46mm x 15.1mm, handy sizing if it were going to be used by pilots as IWC intends. Inside the case is the automatic calibre 82760, an in-house movement with a 4Hz beat rate and 60-hour power reserve. It also features IWC’s Pellaton winding system, which the brand claims is both more efficient and more shock resistant than a standard ball bearing system. The watch is limited to 500 examples worldwide. 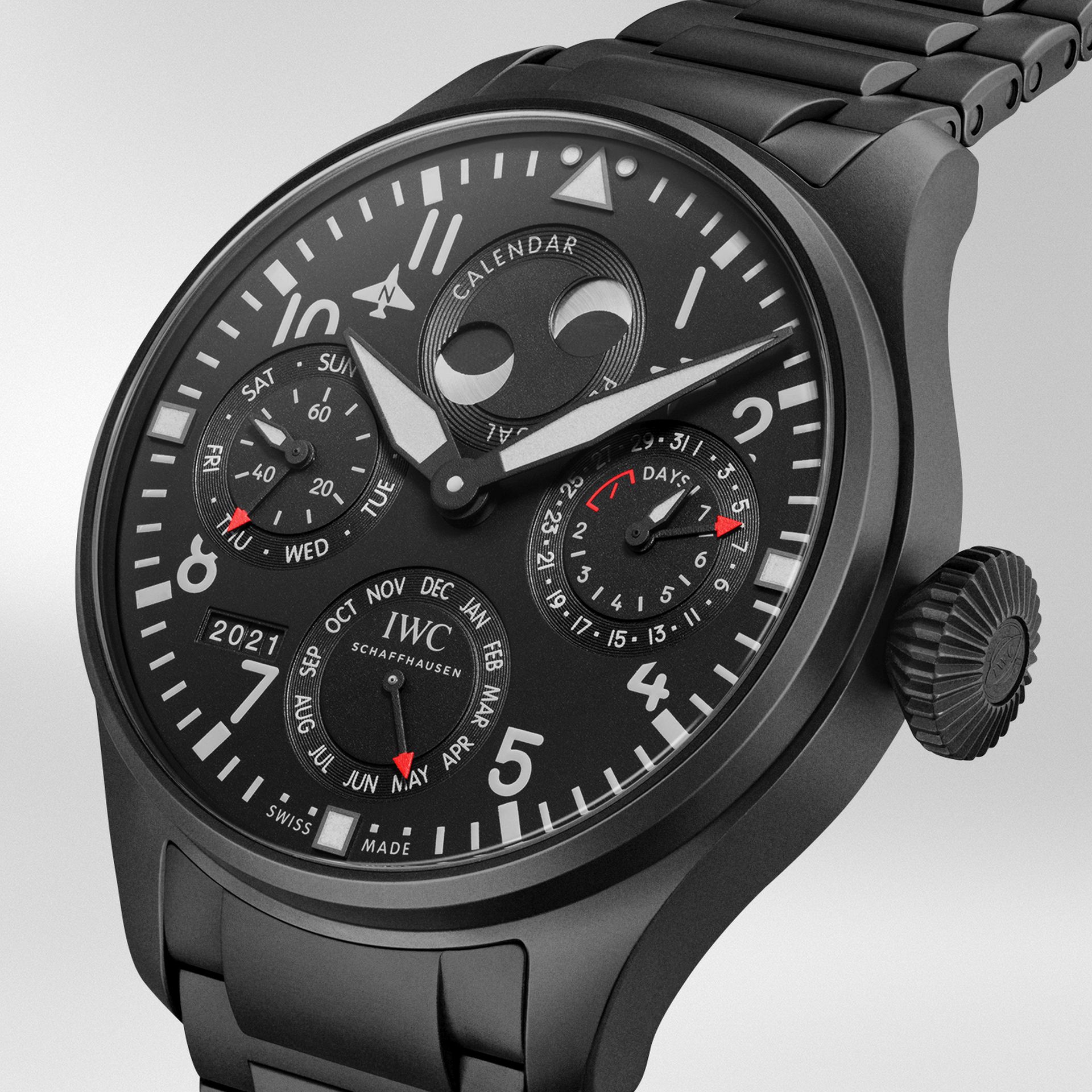 The second piece is the Big Pilot’s Watch Perpetual Calendar TOP GUN Ceratanium (ref. IW503604). It’s IWC’s classic pilot’s watch, loaded with a perpetual calendar and given the TOP GUN treatment. “That’s not exactly new”, I hear you say, and you’re correct, the ref. IW502902 already exists. But this new one’s a bit special. It’s the first time IWC has made a bracelet out of its proprietary Ceratanium material. It’s a blend of titanium and ceramic (as the name suggests) and therefore benefits from the positives of both. It’s very lightweight like titanium (roughly 30% lighter than stainless steel) while still retaining the strength of titanium. It’s also very scratch resistant like ceramic, but it shouldn’t have the brittleness either. The Timezoner TOP GUN is also made of Ceratanium, but alas, it’s not available with the bracelet.

Blacked out things are not to my taste, blacked-out cars especially, but as my recent Top 5 on black watches pointed out, there are some ‘shadow’ watches that work. This one does. I like the splashes of red around the dial too. The watch has similar proportions to the previous, measuring 46.2mm in diameter and 15.4mm thick, it’s a hefty watch, but that is primarily thanks to the sizeable calibre 52615 inside it. It has a massive seven days (168 hours) of power reserve, as well as a 4Hz beat rate. It also displays all the things you could possibly need in a perpetual calendar, including the day, date, month, year (the little box down at 7.30), the moonphase and the watch’s power reserve. This special watch will be limited to just 150 examples worldwide, and I expect they’ll be quite the hit.