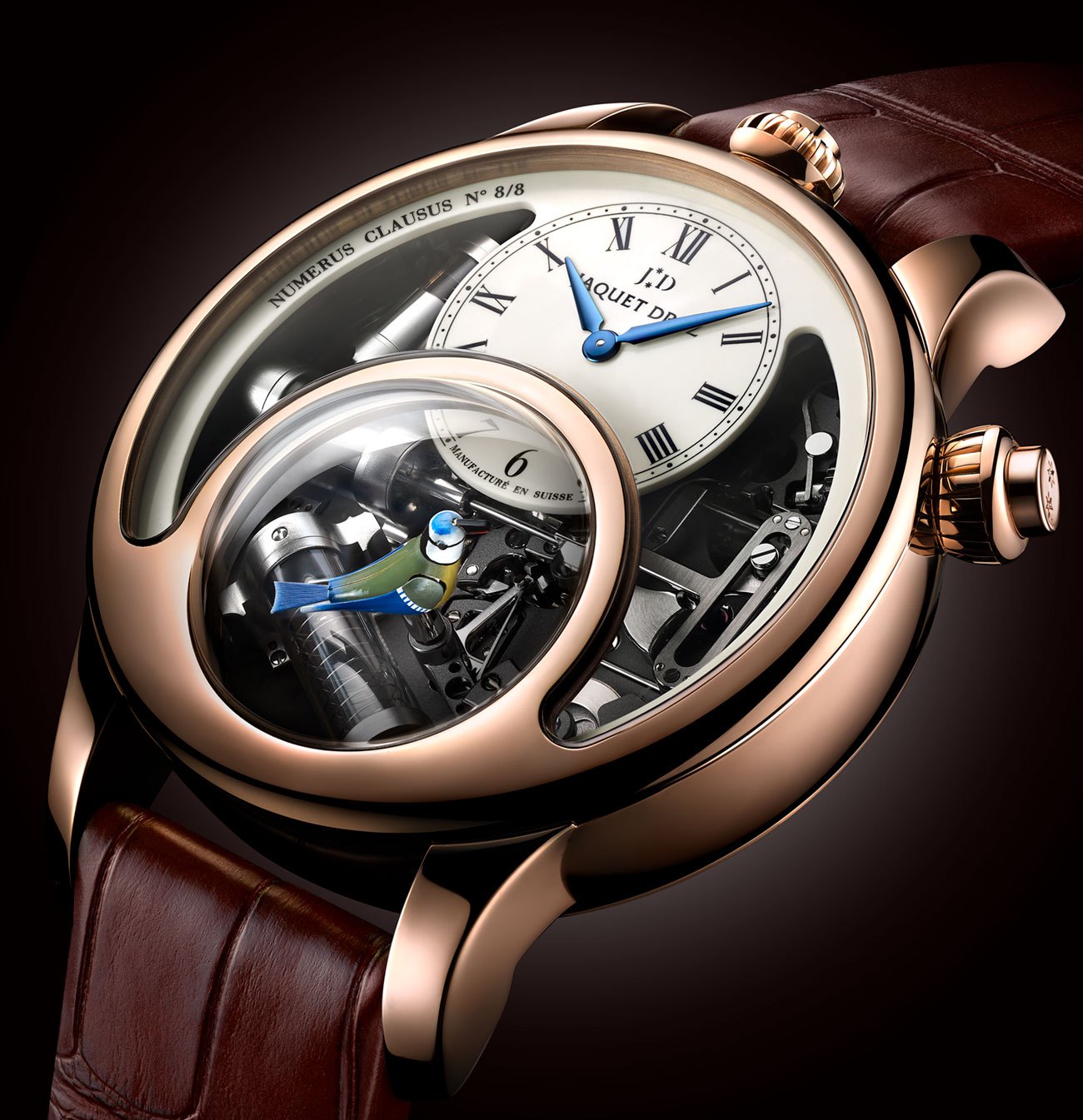 Some timepieces transcend beyond the simple function of time keeping. Some of them are sculptured into miniature art pieces. The most well-known brand that does so is, of course, Jacob & Co. From their Astronomia line to their Opera line, their watches are more than time pieces, their pieces are on a league of its own. It is no surprise then if other watches companies are seen to try to replicate this and to try transcending beyond just being a time telling instrument. One such brand is who have been doing so is Jaquet Droz.

Jaquet Droz was never just a watchmaking company. They started off making automata, many made for royalties and aristocrats and specialty clock making. Since 1738, Jaquet Droz has been known to include the influence of nature in all their works with their most famous and popular automata revolving around birds and the chirping movement. Hence it was only fitting to include that part of their DNA into their horological aspect of their brand, but it wasn’t easy. They first started with painting the bird on their enamel collection. Then they progressed by incorporating the aspect of the nature while creating a dial that depicted motion through nature. Now finally, they have reached their end goal, encapsulating a bird in a watch while being able to make it produce chirping noise, just like their automata, and it’s called The Charming Bird. 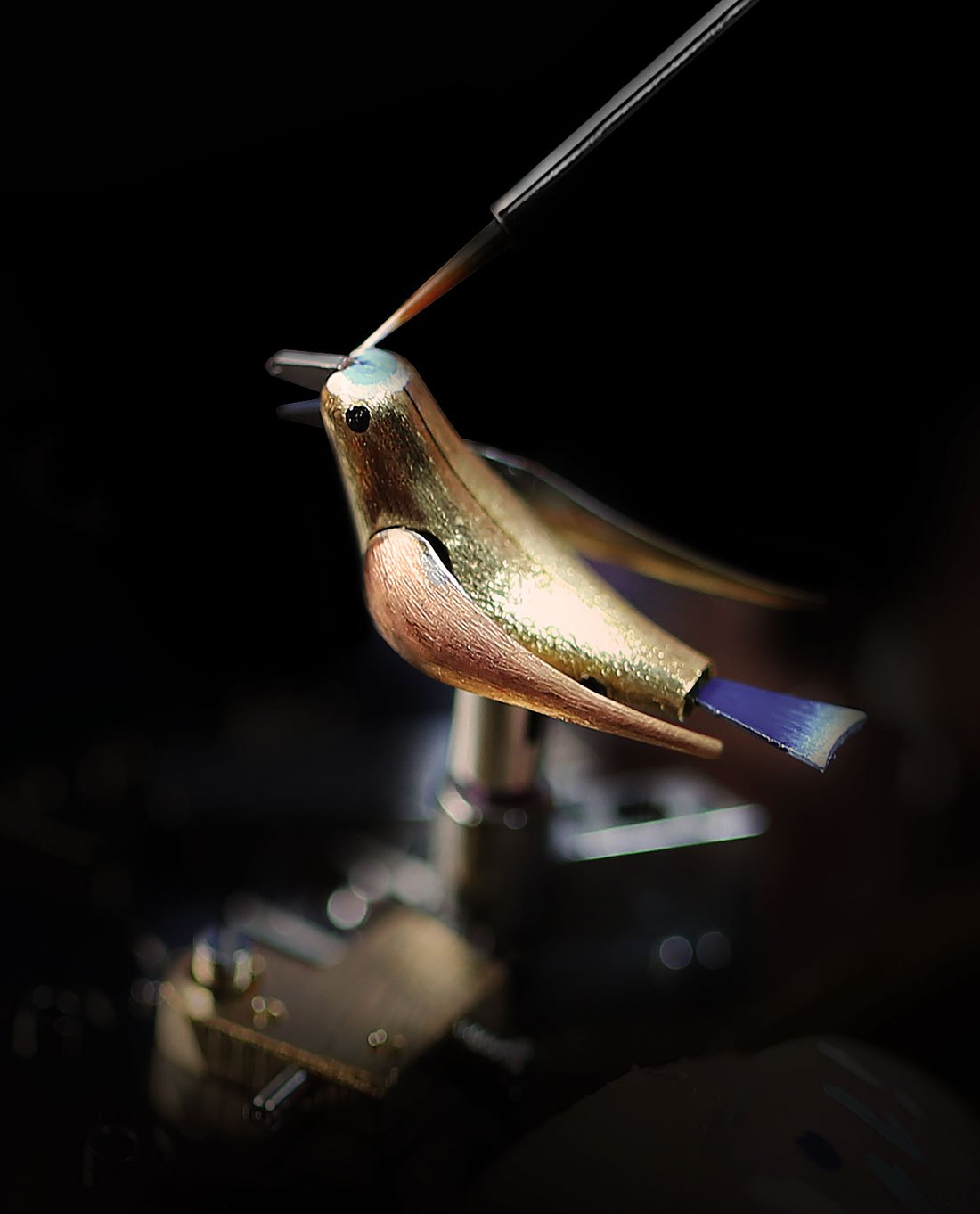 The artisans of the Jaquet Droz Ateliers d’Art spend over twenty hours handcrafting and fashioning each songbird. This is evident when you exams the bird’s feathers, its head and the exquisitely delicate engravings on the tail in an exacting stage that demands total accuracy and concentration from the artisan. The bird is ensconced in a 47 mm-diameter case with a determinedly contemporary look complemented by one of two new colours: the red gold or the white gold. A dome-shaped sapphire crystal caps the chirping bird specially conceived to enhance the effect of each ray of light that passes through it. The movement inside is Jaquet Droz Self-winding Calibre 615, made originally by Blancpain, contains 29 Jewels & has an approximate power reserve of 38 hours. 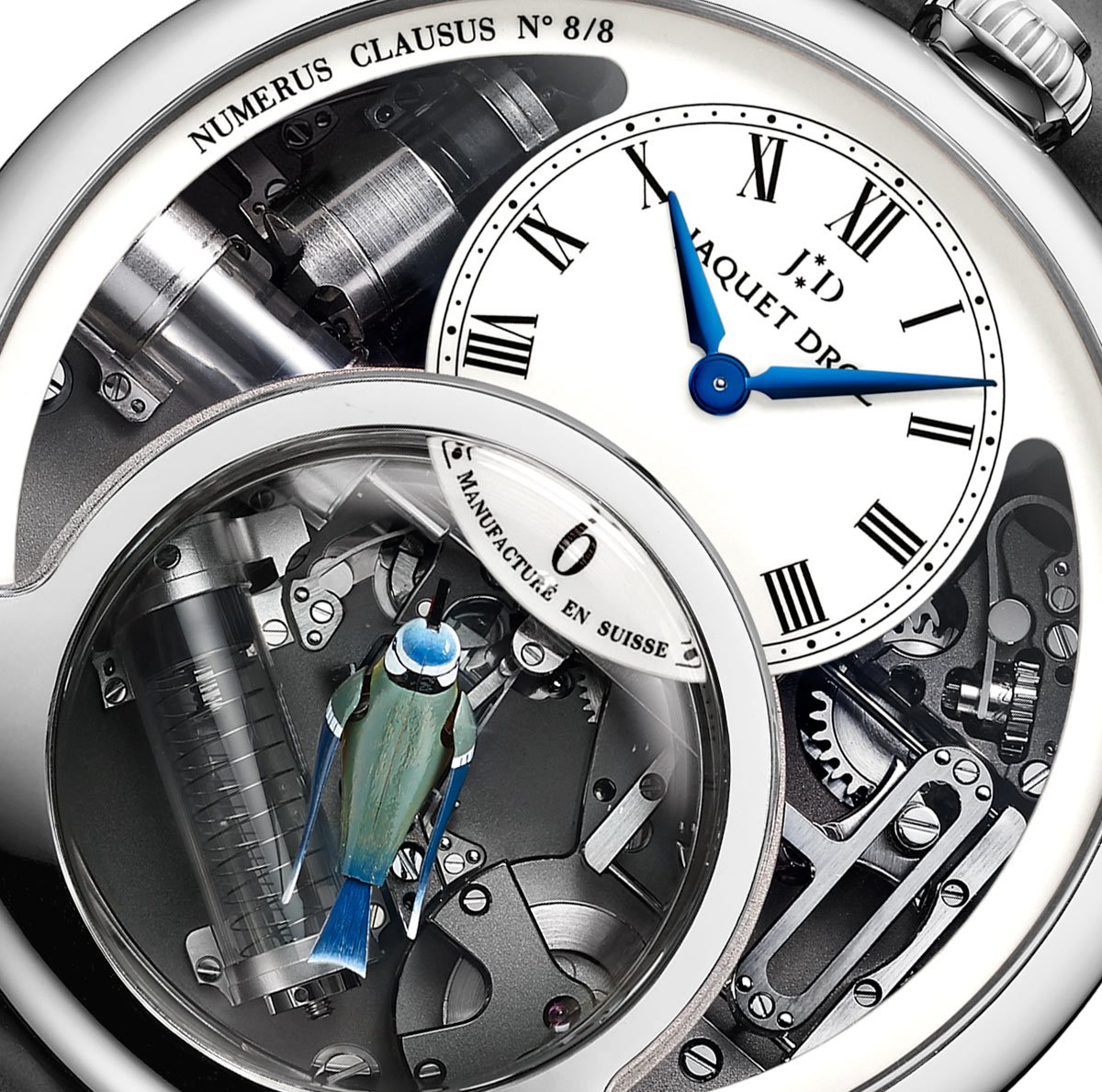 The main party trick of the watch, of course, is the bird. Upon a push of a button on the top, the bird starts to turn around while through the use of air compressed by miniature pistons, generate a bird whistling sound. New technologies were specially developed to achieve this: sapphire for the tubes and carbon for the piston. Sapphire is a mineral with strong resistance to wear and tear. Carbon is used to limit friction and increase water resistance. Tiny pistons that pump & store air produce the sound. The exact sound is dependent on the speed of the piston and the shape of the bellows opening. 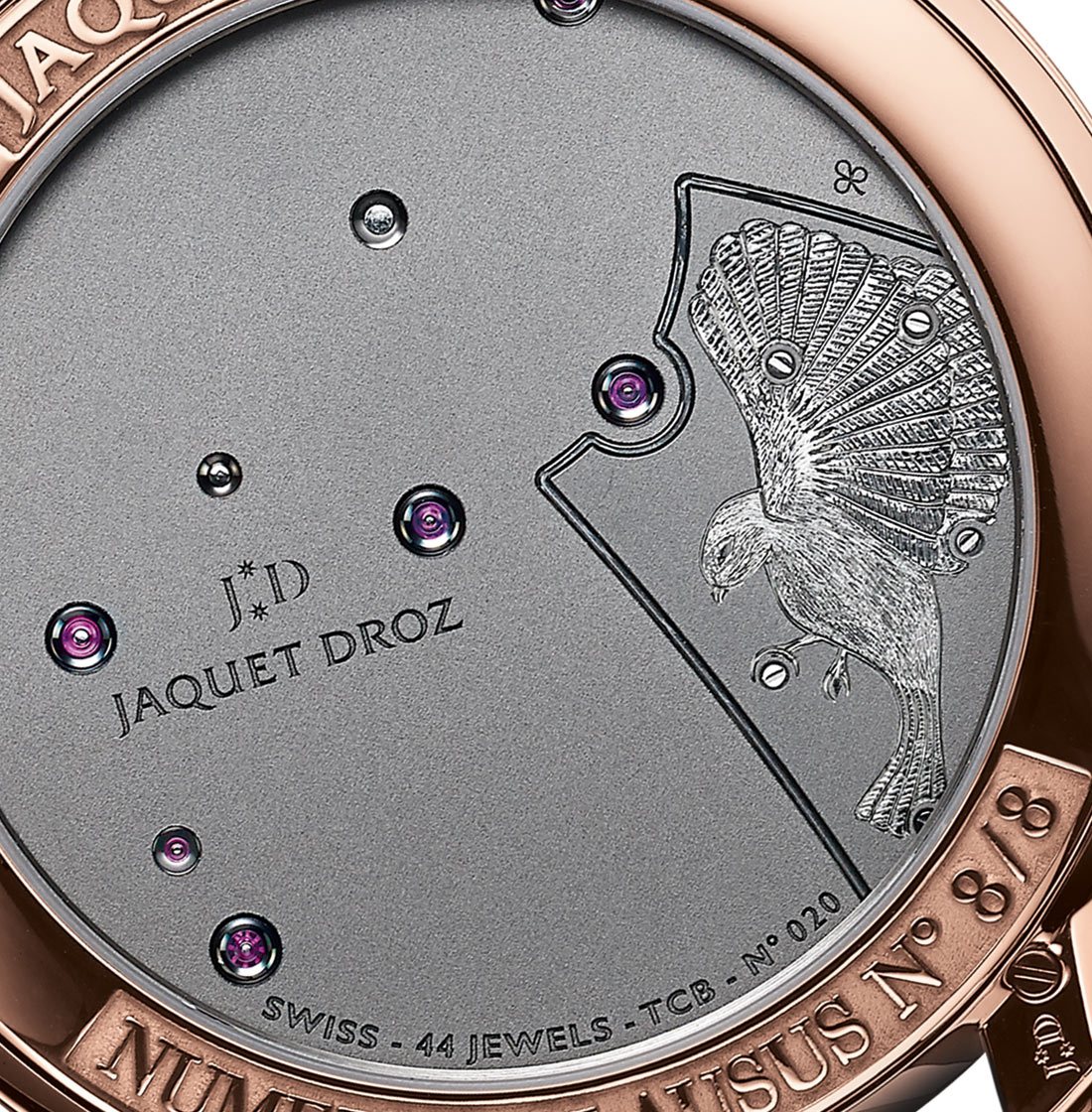 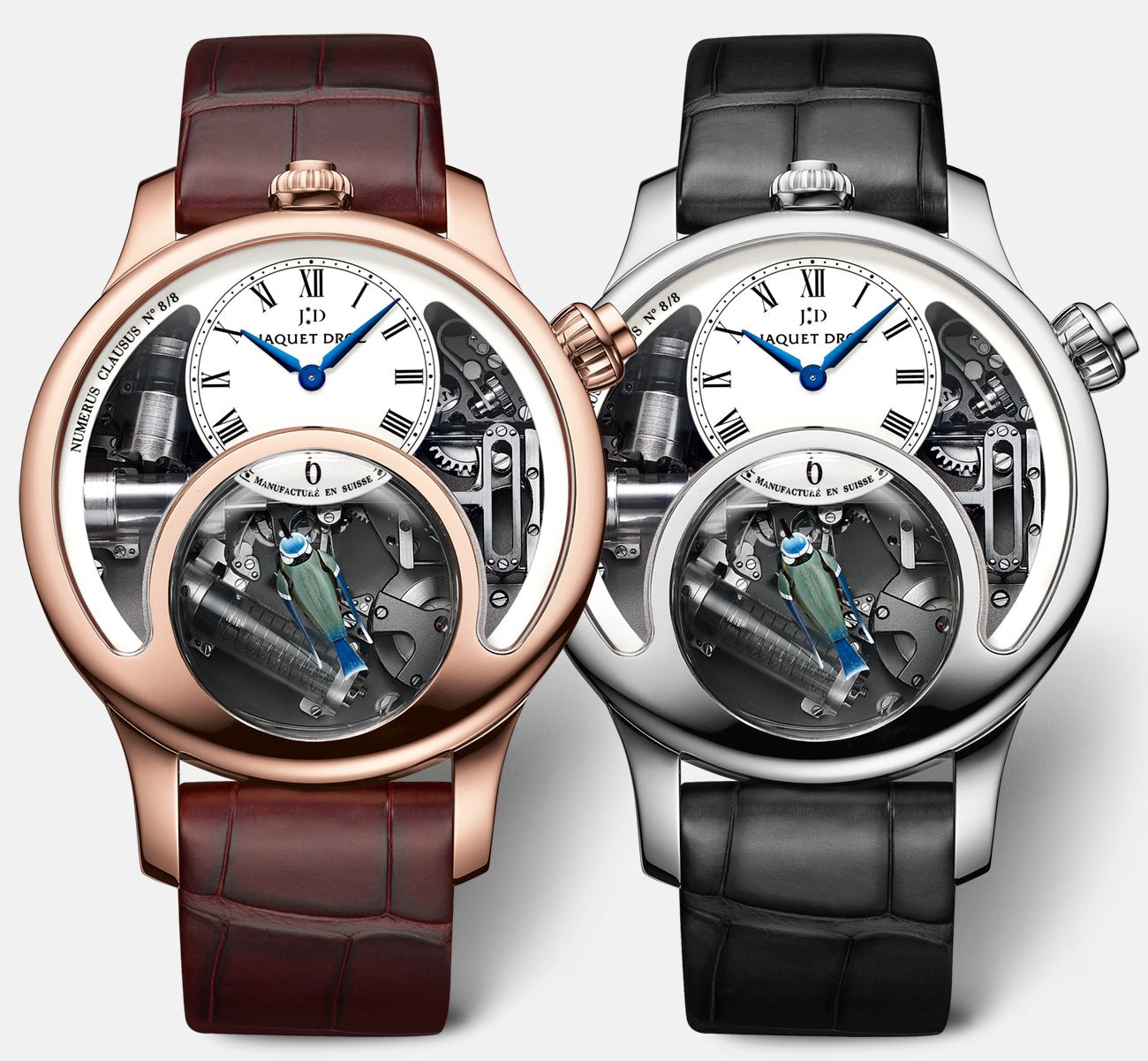 With The Charming Bird starting at $400 000 USD, the watch is seen to be more ‘affordable’ when compared to Jacob & Co’s Astronomia which starts at $550 000 USD. Upon analyzing its unique designs and innovation, it is no surprise then to understand why Jaquet Droz’s The Whistling bird won the Grand Prix D’Horlogerie. Some watches, Ironically, are like timeless art pieces. Just like a painting by Picasso or Da Vinci, you could stare at it for hours and get lost in the small intricate details they have to offer. But at the end of the day, you can’t wear a Picasso but a Jaquet Droz, well that’s up to you do decide. Visit Jaquet Droz here.