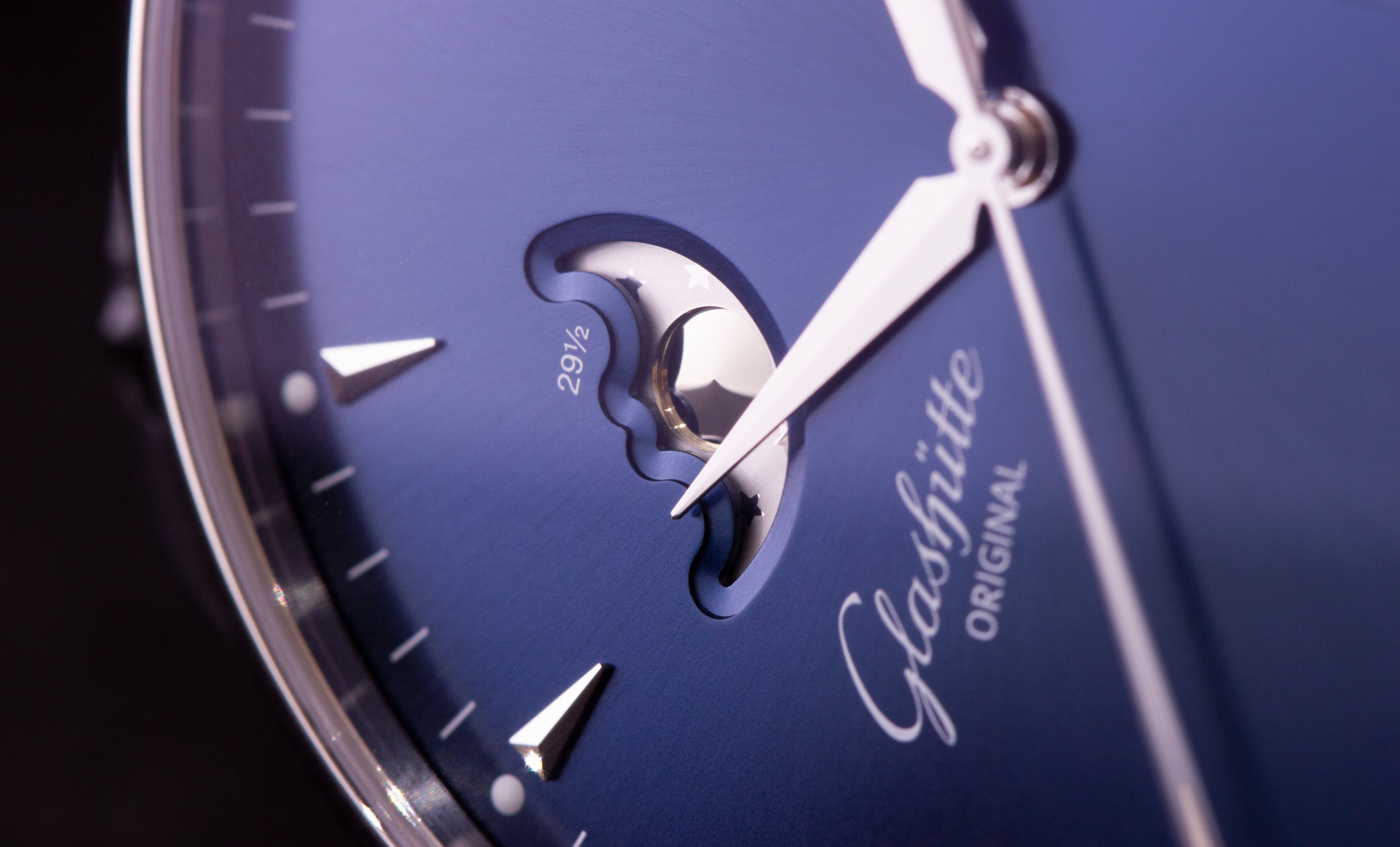 I recently had an excellent opportunity to try out a brand new timepiece from German-based watchmaker Glashütte Original. The brand introduced the Senator Excellence collection back in 2016, and at Baselworld this year it added more options which are less formal than the first editions. It was apparent to Glashütte Original that, while very handsome to look at, the first watches with their imposing Roman numerals were a lot less appealing to the younger market. To change this, they created a watch which has become one of my personal favourite dress watches, here’s my take on the Senator Excellence Panorama Date Moon Phase. While those Roman numeral versions are also available in 18K red gold, these new pieces are only available in steel for now, though I suspect a gold version may come along in the future, even white gold perhaps. 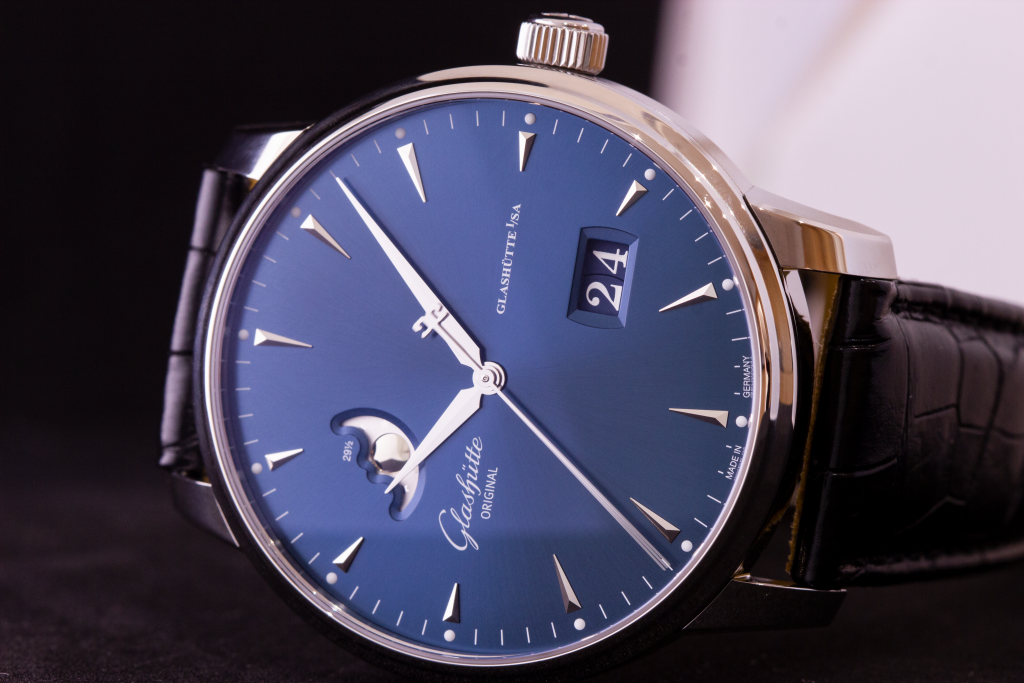 The first thing I noticed about it upon taking it out of the FedEx box was just how light it is for the size of the case. The watch weighs in at 86 grams on our patented VSS (Very Scientific (kitchen) Scales), despite this, the stainless steel case is 42mm in diameter, polished on the bezel and lugs and brushed on the sides. It would be interesting to see what the watch is like when put on the stainless steel multi-link bracelet, but then I would have missed out on the awesome leather strap. There’ll be more on that in a bit.

The dial is very clean, legible and oh-so German in design. Only the bare essentials here, there’s not much writing, and the Glashütte Original logo is quite small. Above that logo is the moon phase display. The moon phase itself is very accurate, requiring a reset only once every 122 years. It contrasts with the blue of the dial quite well, as the disk is silver, but this does make the tiny stars quite hard to make out, I know they are microscopic, but collectors of such fine timepieces enjoy examining them with a loupe. The moon itself is brilliantly polished and inverse domed in shape, this isn’t visible to the naked eye, but it does show up with a macro lens. 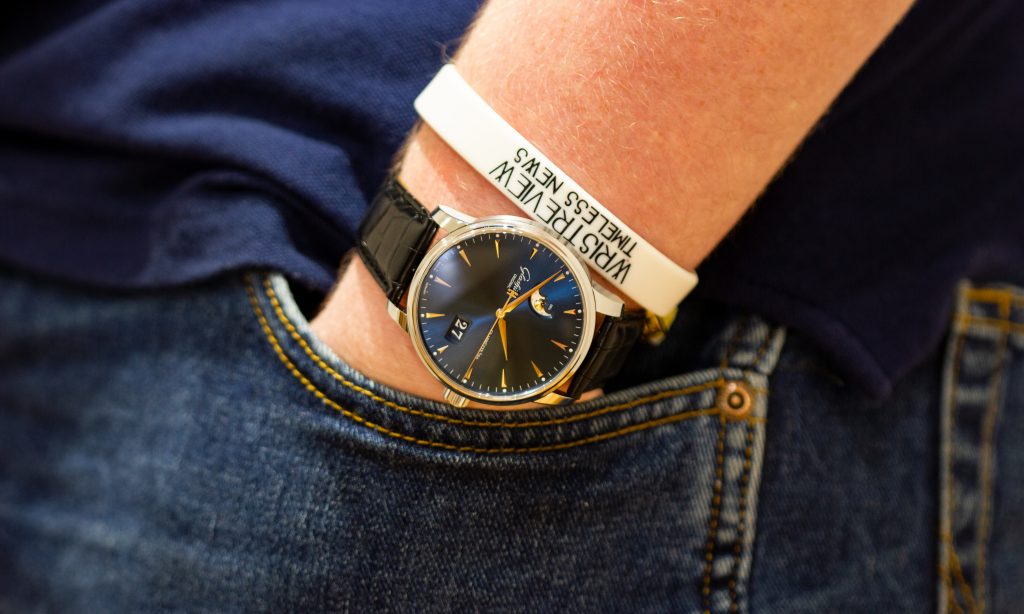 You would think that the slim hands and markers are quite tricky to read at a glance, but this is not the case. The triangular markers have been polished on all sides, so they reflect easily and show up well, had they been larger I suspect they would be trickier to see. The seconds hand is very long and thin, and it makes it all the way to the end of the painted markers. It seems trivial, but this is very much appreciated as it shows the company paying attention to its design, not all watches do have the correct length of hands. The lancet-shaped minutes hand also touches the markers while the hour hand does not. They’re both fully polished and are very attractive, providing a pleasing view. With this watch, the restrained design is where the details lie, rather than in more traditional and ornate works, this one maximises on space to create stunning effects, but it does have a couple of tricks up its sleeve. 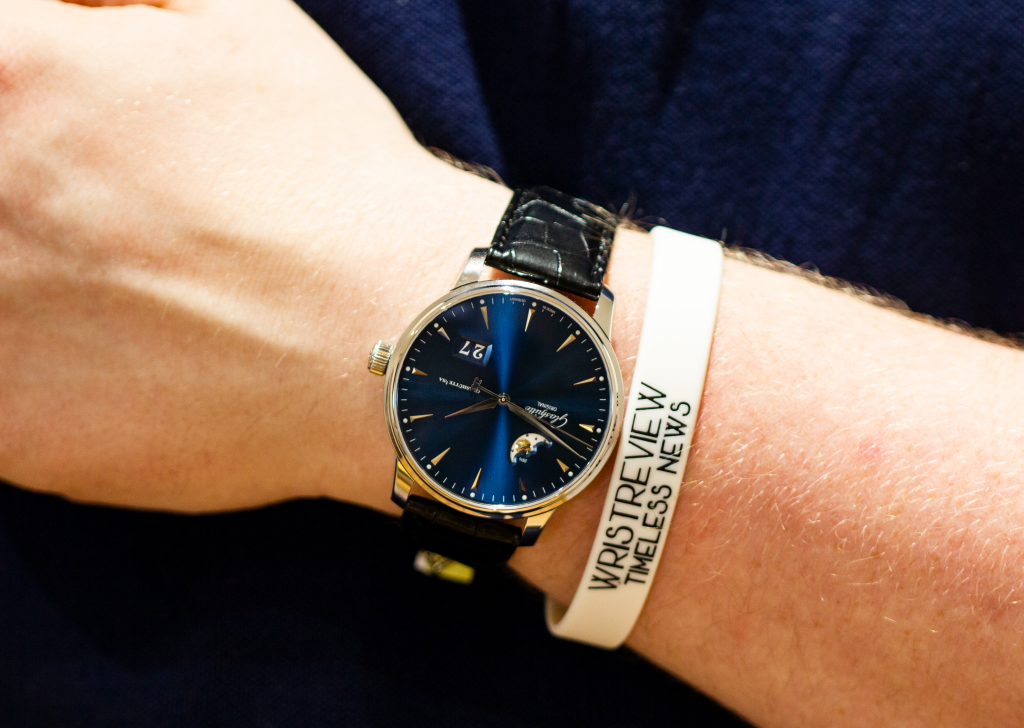 For example, the moon phase indicator is controlled and adjusted through the crown, making audible and satisfying clicks as it changes. Instead of a ridiculous pusher that requires a cocktail stick in the side of the case, pulling the crown out (the crown is not a screw down type) to its first position allows you to change the moon phase. If you turn it in the opposite direction to the moon phase, then you can quickly flick through the Panorama date. This is quite a traditional design element for this watchmaking region, but it adds a twist. Instead of layering the number disks one on top of the other, they are laid one inside the other, so there is no height difference, this is the correct way of doing it. I’m a little intrigued by the colour choice. I think if the numerals were blue on silver similar to the moon phase it could have produced more balance on the dial, or at least given a reason for the moon phase disk to be silver. I love the sunray effect, coupled with the blue dial, it pops when worn on the wrist and dressed with the appropriate attire. 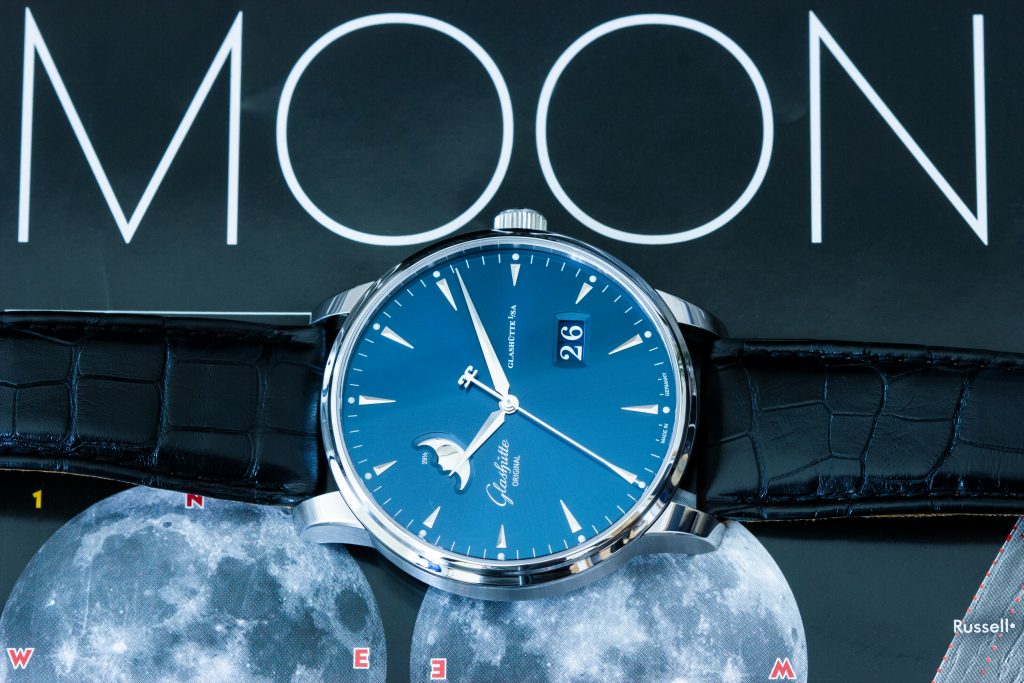 While we only had a hands on with the beautiful blue dial version of the Senator Excellence, there are two other dial versions to choose from. At the same time as the blue version, Glashutte Original also launched a version with a white dial, and also a silver dial with a different pattern to the blue and white versions with a vertically brushed finish. It’s a good demonstration of how versatile a design can be when not only the colours change but also the patterns on them as well. The dials are made in the manufacturer’s unique dial factory in Phorzheim, which they have worked with since the 1960s before coming to own entirely. 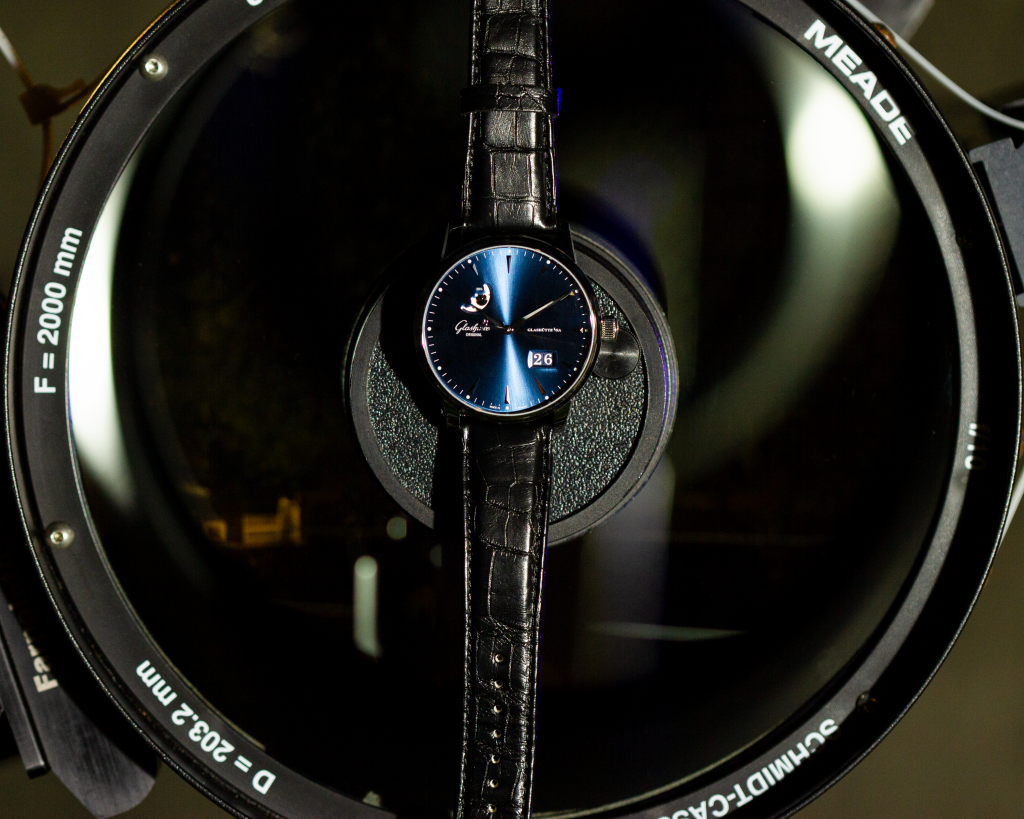 Inside the watch is the very aesthetically pleasing Glashütte Original calibre 36-04. This movement is very similar to the calibre 36-03, except for the added moon phase. The 36-04 is in-house designed and built, and is gorgeous to view. The top of the 21k gold rotor with double G logo is striped, along with the top of the traditional Glashütte 3 quarter plate, another hallmark of the region. The top of the balance cock has also been striped, while the swan’s neck regulator has been polished. The wheels have been given a very high-quality sunburst polish, and the track for the rotor has been decorated using a milling process with an attractive ribbed design that reflects light very well indeed. If I had to add my thoughts on it, I love the design but would like to see a hand engraving on the balance cock, Glashütte Original does such a good job on it that I feel this ‘Excellence’ model deserves that extra twist, but not having it does help to keep costs in check.

It’s not like this movement is all dance and no poke either. This is one of the first runs of movements to use silicone components, meaning better resistance to magnetic fields. The balance runs at 28,800 vph, a modern and accurate speed. The power reserve is 100 hours guaranteed, meaning it’ll happily sit around on those weekends you want to go off doing sporty things, and it’ll still be accurately keeping the time when you return. The movement has also been adjusted to six positions, instead of the five that most manufacturers use today. There’s also a double G stamped into the polished edge of the caseback. That’s Glashütte Original’s mark that it awards to watches which pass 24 days of testing, which includes examinations looking at position accuracy, adjustment for the six different positions, the effects of temperature, stability and testing over the 100-hour power reserve and finally water and function testing. That’s a lot of abuse for a watch to go through to get that unique guarantee, but it’s worth it and something us watch lovers will nerd-out over.

Finally, I’d like to talk about the black Louisiana alligator leather strap fitted to this watch. It’s so unbelievably supple and comfy to wear. The outside is the black alligator, while inside there is a soft material that hugs the wrist and offers oodles of comfort, meaning this is something you could wear all day without noticing, it’s light enough to do that as well. 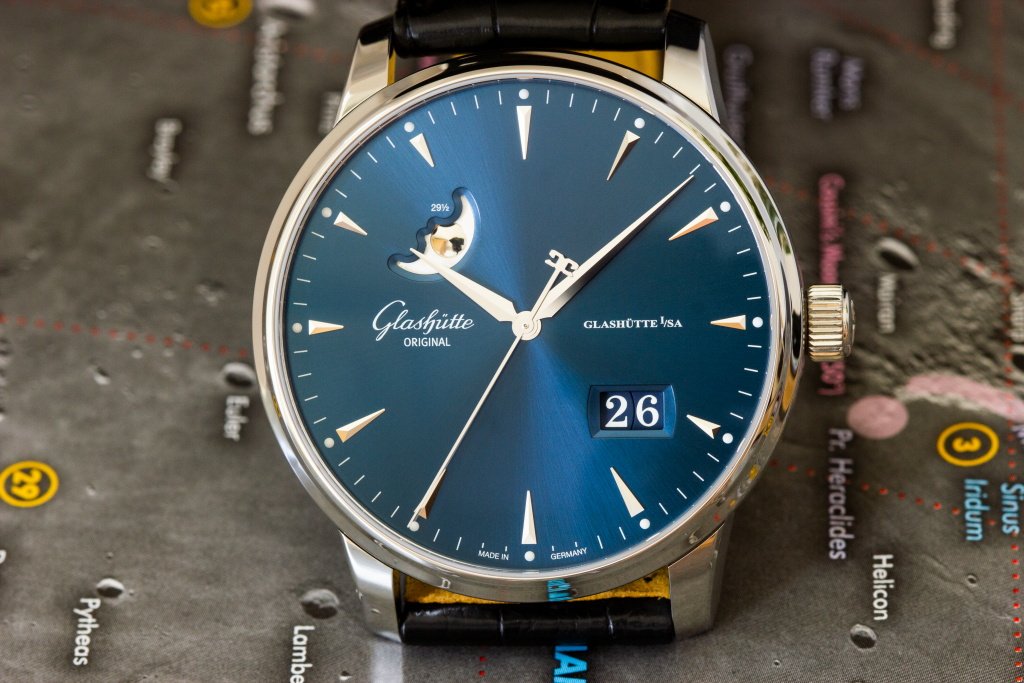 This is a watch I’d recommend to someone who is quite young, trendy in terms of fashion and looking for something that’s different from the usual boring watches on offer for similar money. Amassing a few strap options and the bracelet will allow the watch to become a tremendous one-piece collection, it’s got the fab dial, a couple of complications and a stunning movement to view as well. It’s even water resistant to 50 meters too. The price for all this horological German-ness is €10,200 for the leather strap or €11,700 for the more sporty steel bracelet. Why not both? Experience more about these rare pieces and Glashütte Original’s Watchmaking Art.

Photograph backdrop credit: The Phases of the Moon from BBC Sky At Night Magazine.