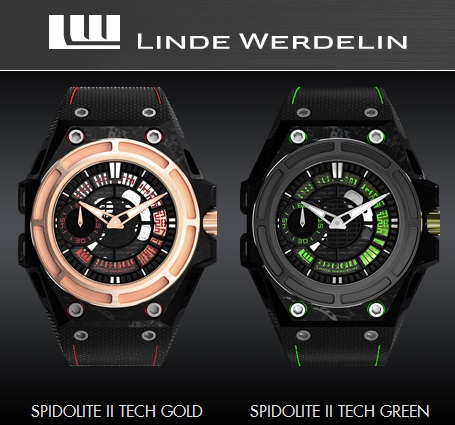 Here is the new black beauty from Linde Werdelin, who already introduced their new collection for this years Baselworld release , the SpidoLite II Tech collection. This new model is based on the regular SpidoLite II, but this is little different when it comes to what material it is made off.

The construction consists of an inner case and an outer case, which carries on the LW DNA. The inner case has been made out of ALW while the outer case has been made out of carbon. The SpidoLite II Tech Green has a bezel made out of ceramic. This makes the watch lighter and more durablie than its previous versions. ALW stands for Alloy Linde Werdelin and is made out of an metal alloy/composite that is almost 50% lighter than Titanium, and has originally been developed for the aerospace industry. The skeletonised SpidoLite II has the perfect combination between lightness and durability, this has taken two years for developers at Linde Werdelin.

Linde Werdelin has had some very interesting choose of movements, but in this SpidoLite II Tech models, they used their caliber LW04 movements, based on a movement by Concepto. Concepto is a independent movement manufacturer that is based in La Chaux-de-Fonds, Switzerland.