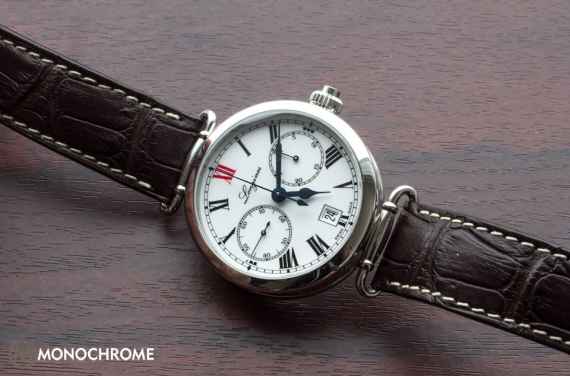 Over the past years Longines has released quite a few historically inspired timepieces like the Lindbergh Hour Angle Watch and the Weems Second-Setting Watch, which both featured in our History of the Pilot’s Watch part IV. But Longines didn’t stop there. They do have a very rich and long history, meaning many important timepieces from the past that easily qualify for a re-issue. Today we’re gonna have a look at the Longines Column-Wheel Single Push-Piece Chronograph that was released in celebration of the 180th anniversary of the brand.

Today Longines is not only known for their rich history, but also for the ‘affordable luxury’ they create. I cannot think of another brand that has so much, including in-house movements, and prices them in the range from roughly € 1.000 Euro to 6 or 7k Euro for a full gold timepiece with an in-house column wheel chronograph. If that isn’t impressive! For this review Longines lend us a very special piece that was introduced to celebrate the brand’s 180th anniversary. It is the reference L2.776.4.21.3 of the Heritage collection.

First impressions are important, that’s something we all know, and Longines did a splendid job. The Column-Wheel Single Push-Piece Chronograph ref. 2.776.4.21.3, or let’s call it the “Monopusher”, features all the classic looks that one would expect with a watch coming from the Heritage collection. The round 40 mm stainless steel case with vintage-styled lugs, is strapped to your wrist with a beautiful dark brown alligator strap. The crisp white dial features Roman numerals for hour markers and the number XII is in red, a lovely retro-touch. Around the perimeter of the dial is a railtrack for the minutes and seconds and in the center are two registers for the chronograph’s 30-minute counter and the small running seconds. Everything about this watch breathes vintage, retro, classic.

Usually we spent a few words on the brand’s history, but in this case that would simply be to much. Longines’ history goes back to 1832 and they’ve been making timepieces ever since. During the more than 180 years, Longines have created so many iconic timepieces. Many of which collectors still search for and prices increase over time. So we’ll focus on Longines’ history that is linked to this Monopusher, which brings us to the year 1913. In that year Longines introduced their first chronograph caliber for a wristwatch that is activated by monopusher: caliber 13.33Z.

This movement measures 29 mm in diameter and includes a 30-minute instantaneous counter, meaning the hand of the minute counter jumps instantaneous to the next minute, when another minute has past and the large central seconds hand passes the 60 again. This chronograph was accurate to one-fifth of a second, however this only referred to the increments between the minute markers and not to the beat rate.

In 1936 Longines create a caliber that becomes legendary, the 13ZN. Longines produced it in various versions, with one or two pushers, with a semi-instantaneous 30-minute counter or a 60-minute continuous counter. The manually wound movement also featured a fly-back function. After that more movements, including one or two chronographs, followed, but it wasn’t until 2010 before Longines introduced an entirely new chronograph that is actuated by a column wheel. In that year Longines introduced caliber L688, which was used mainly in the Saint-Imier collection, but also in several chronograph of the Heritage collection.

In 2012 Longines introduced caliber L788, again a column wheel movement, that is exclusively developed for Longines. This movement features a monopusher control of the various chronograph functions – start, stop and reset – that is integrated into the crown. According to Longines this movement is based on the the vintage caliber 13.33Z that was introduced in 1913. It was first used in the pilot’s watch The Longines Avigation Watch Type A-7, which we showed you here.

The photo of the vintage Longines, equipped with caliber 13.33Z, already shows the strong similarities between the old watch and the new 180th Anniversary Monopusher. The watch comes in a beautiful and heavy wooden box, with a thick manual and warranty papers. And again, for the price you get a great and very complete package.

Once unwrapped and on the wrist, the Monopusher looks excellent and fits very comfortable. The brown alligator strap compliments the watch and it goes very well with either casual jeans or with a suit and tie; in winner in all situations. Due to the vintage lugs, the 40 mm case wears slightly larger and has a real nice wrist presence.

As already said, the 180th Anniversary Monopusher screams “VINTAGE”, while it feels, wears, and operates and a new watch. The white dial with vintage styled markers, the vintage styled brand name and the blued steel hands all add to the vintage-style experience. The wired lugs and the monopusher, which is integrated into the crown, add even more of the lovely vintage feeling.

The proprietary movement is visible through the sapphire crystal in the case back and there you can also admire the column wheel that actuates all chronograph functions. The crown operates the winding and adjusting of the hours and minutes. Pulling the crown one click puts it into winding position, pulling a second time allows to adjust the hours and minutes. When pulling the crown, every click feels solid and also the winding feels good. The action on the single push-piece also feels very solid and I must admit that I’m positively surprised by the quality.

The dial has all the crisp white looks of  a vintage enamel dial, but it is actually painted white. On first glace you would easily mistake it for an enamel dial, but if Longines had chosen to use enamel dials that would have increased the price considerably!

The hands are not simply painted blue, but Longines went the full way and used heat blued steel hands. The difference between painted blue hands and heat blued steel hands is easily recognizable, because the heat blued steel has a certain luster to it that cannot be imitated by paint. The shape of the hands by the way, perfectly resembles the old monopusher with caliber 13.33Z. Not only the hour and minute hand, the large centrally placed chronograph seconds hand, but also the small running seconds hand and the 30-minute chronograph counter’s hand that ends in a tiny arrow.

Surrounding the dial are large painted Roman numeral for hour markers and a railtrack minute chapter ring, with slightly thicker stripes at the full hours. The Roman numeral twelve is painted red and the brand’s name is printed in a vintage styled font. The two sub dials, one for the small running seconds and the other for the 30-minute chronograph counter, feature a similar railtrack chapter ring.

At first glance the round case looks like a simple round case, that is attached to the strap by vintage styled lugs. These lugs draw much of the attention away from the polished round mid-case band and the polished bezel and case back. Both the bezel and case back protrude a bit, which makes the mid case slightly recessed. The ribbed crown with integrated monopusher (also called single push-piece) sits in the right-hand side of the case band. On the other side is a small recessed pusher that allows you to quick-set the date.

The case and lugs feel rather light. That enhances comfort of wearing, but at the same time might feel a bit cheapish. All I can say, is that it was great on the wrist.

The proprietary movement, caliber L788, self-winding column-wheel chronograph movement beats at a frequency of 28,800 vibrations per hours and provides 54 hours of power reserve. That all sounds great and when you flip the watch over to see all the mechanics it gets even better. The column-wheel is executed in heat blued steel and the large bridge that holds all gears in place is finished with circular spotting.

The rotor features the Longines logo and slightly recessed and filled with gold paint are the brand’s name and caliber reference. Considering that this is what you get for just € 3.620 (official retail price in the Netherlands, including 21% VAT), it is simply very impressive!

Belonging to a large group like the Swatch Group has its advantages. The proprietary movement was been developed and manufactured within the group, meaning a strong control over quality and supply. And also the possibility to deliver such quality in large quantities and for a very impressive price.

All together the Longines Column-Wheel Single Push-Piece Chronograph 180th Anniversary is excellent value for money! The undisputed quality and the stunning vintage style that comes back in every aspect and details of this watch, is something that I really like about this watch. It is also very comfortable on the wrist, it’s easy to read the time and simply looks great with any style, either casual or chic. According to the vintage style, hands are heat blued and they are not applied with luminescent material, thus reading the time when it’s dark requires a bed-side light.

More information can be found via the Longines website.

A big thanks goes to our friends at Monochrome, for sharing this great article with us.