The Scott Dixon was created in partnership with the two-time IZOD IndyCar Series Champion (2003, 2008) and 2008 Indianapolis 500 Winner.

This sporty, two-pusher automatic chronograph is packed with racing-refined features and offers exceptional legibility; a tachymeter scale engraved around the high-tech bezel made from stainless steel and carbon fibre; and chronograph pushers inset with carbon fibre and decorated with a chequered flag motif. 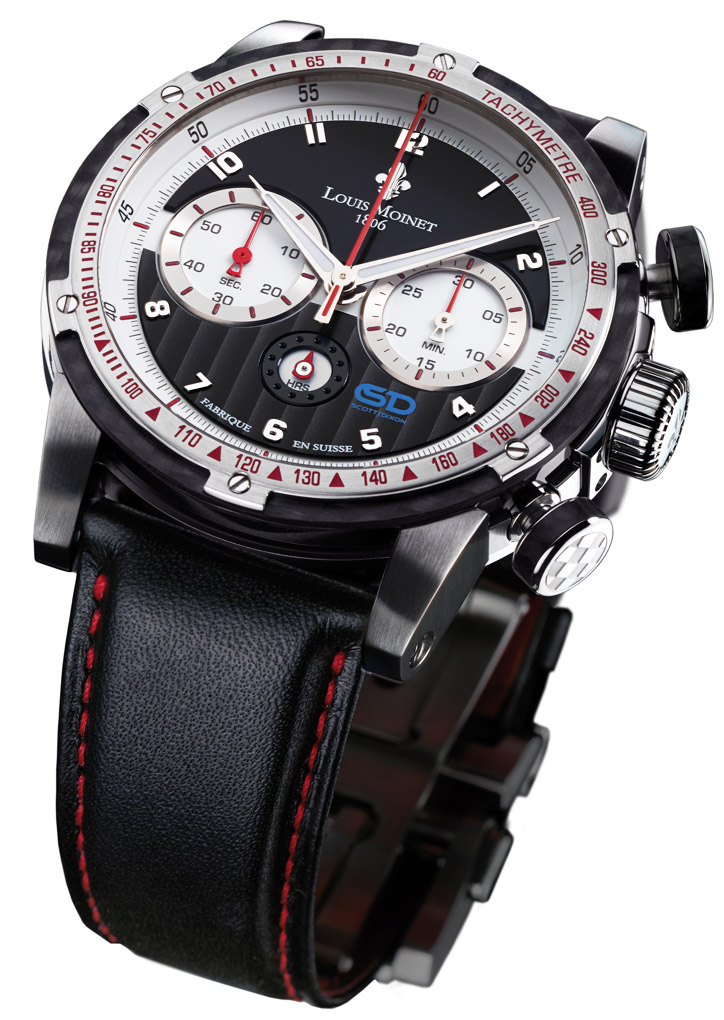 “I am very excited and honoured to be a part of the Louis Moinet family. It’s a brand with such an amazing history,” says Dixon. “The chronograph we have created is a beautiful combination of great design, innovation and precision and I am proud to wear it both in and out of my Indy car.” 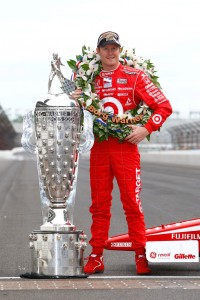 Louis Moinet CEO and Creative Director, Jean-Marie Schaller, a passionate motorsport enthusiast, is equally thrilled to have worked with the New Zealander on this timepiece.

He says: “Scott Dixon is one of the greatest drivers in IZOD IndyCar Series history and he is still at the top of his game with plenty of years ahead of him on the track.

“Scott Dixon was the IZOD IndyCar Series Champion in 2003. Since 2007 he has never been out of the top three and, of course, he was series champion for a second time in 2008, the same year in which he won the Indianapolis 500. That for me makes him a living legend.

“It has been a real pleasure to collaborate with Scott on this Louis Moinet creation and his involvement ensures that we have a fitting addition to our Legends collection.”

The Scott Dixon forms part of the Louis Moinet Legends collection, featuring timepieces developed in collaboration with an iconic figure who has made an indelible mark by excelling at the highest level in their respective field. Scott Dixon more than fits the bill.

The Scott Dixon is available in an exclusive limited edition of 365 pieces in stainless steel.

THE SCOTT DIXON IN DETAIL

The Scott Dixon has been designed with racing drivers and motorsport enthusiasts in mind. The extremely legible dial has bright counters and bold hands and numerals that contrast superbly against a black backdrop. Rhodium-plated central hour and minute hands – filled with white Super-LumiNova glowing an eye-catching green in the dark – are accompanied by highly-reflective, metallised hour indices and there is a seconds subdial at 9 o’clock.

The central chronograph hand is complemented by a seconds chapter ring (measuring intervals down to an impressive quarter of a second), 30-minute counter at 3 o’clock and 12-hour counter at 6 o’clock. The counter hands are in visually-arresting red, as is the tachymeter scale engraved on the bezel, useful for calculating speed or distance when monitoring racing performance. 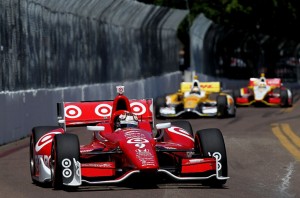 All three subdials contrast strongly against the jet black dial. The lower half of the dial features Geneva wave finishing reminiscent of the vertical grill design on historic racing cars. The dial is completed by the Louis Moinet logo at 12 o’clock and, naturally, Scott Dixon’s signature logo at 5 o’clock, in a cool shade of blue reminding us that Scott’s nickname is the “Iceman” due to his calm and contemplative manner.

The red and white on the dial are neatly evocative of the red and white IndyCars and driver’s overalls that Scott has worn with such distinction while representing the Target-Ganassi Racing team over the past decade.

Carbon fibre is also used to form the inserts for the chronograph pushers at 2 o’clock and 4 o’clock. To enhance grip, the pushers have been engraved with a chequered motif reminiscent of the iconic finish-line flag that Scott has taken 29 times to date in his IndyCar career. The pushers take the form of champagne corks for a ‘podium finish’ experience – and in the case of Scott that means a lot of bubbly: So far Scott has been on the podium 48 times in the 90 races he has completed! 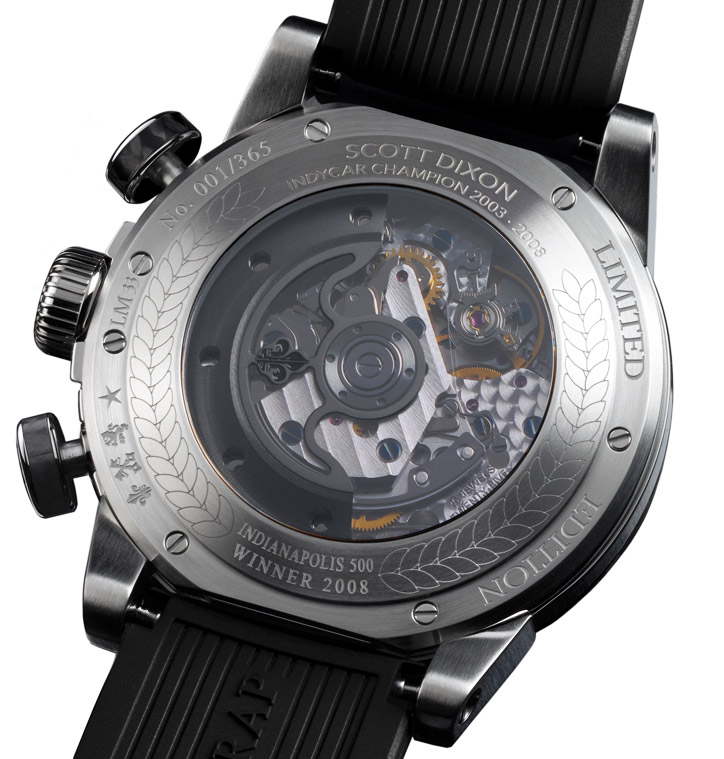 Turning the Scott Dixon over, the tinted sapphire crystal display-back reveals beautifully finished plates and bridges as well as a distinctive open-worked, black rhodium-plated, ball bearing-mounted winding rotor, the design of which echoes that of the brake discs on high-performance cars.

Around the periphery of the caseback, an Indianapolis 500 Winner’s wreath is engraved – extremely appropriate because, as the accompanying inscription reminds us, Scott Dixon was the winner of this famous race in 2008. Also engraved are ’2003′ and ’2008′, the two seasons Scott was the IZOD IndyCar Series Champion.

The Scott Dixon is available in a limited edition of 365 pieces, presented in a deluxe case with black, carbon fibre-style interior.

Born in 1980, Scott Dixon is a modern-day motor racing hero. The New Zealander has won the IZOD IndyCar Series Championship twice, in 2003 and 2008, including the Indianapolis 500 race in 2008. Since 2007 he has never finished outside the top three in the IZOD IndyCar Series. He now has 29 wins and his ratio of wins to career starts is the all-time best of regular drivers in Indy car racing history. In recognition of his achievements, he was appointed Member of the New Zealand Order of Merit in 2012. 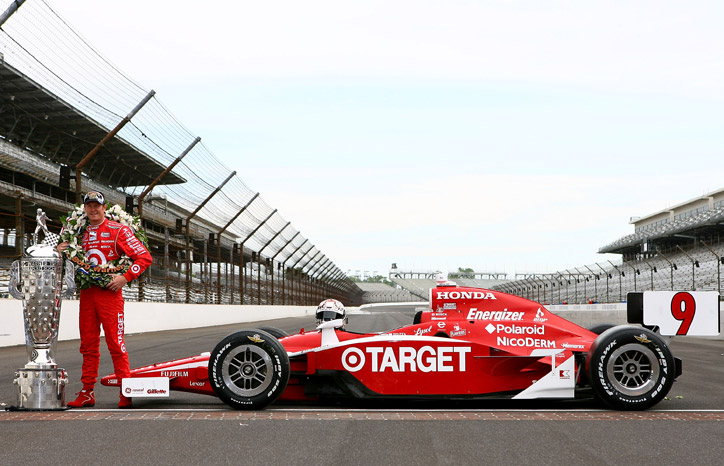