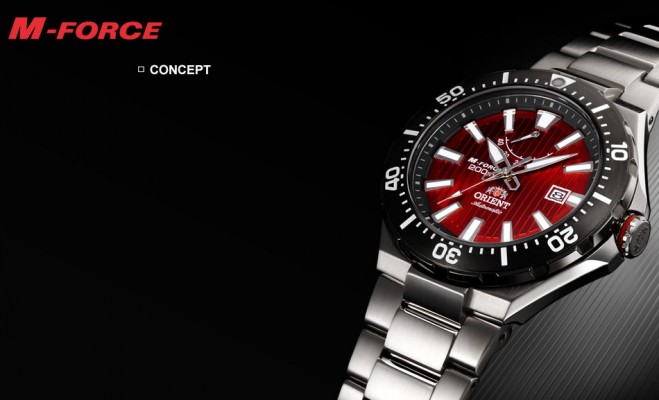 Orient M-Force 200m Diver EL07 Watch – Another Beast to Own

Made using the 316L stainless steel for the case and bracelet, this watch has a one-way rotating bezel, a screw-down case-back and crown and protected by sapphire crystal over the dial. Supersized to 49.1 mm diameter with a thickness of 13.6 mm, this watch has the wrist presence to intimidate.

The watch has power reserve indicator and a date window. The bezel is black PVD with white Arabic numbers and markers. The dial has a blood red vertical louvered pattern. Main markers as well as the interesting partial skeleton hours and minutes hands are painted with the customary luminous paint. The pip at the 12 o’clock position on the bezel as well as the tip of the seconds hand are also lumed.

Similar to the other past generations of M-Force watches with I own with references such as the DV01002B, EL06001H and the EL03001D, this watch has the same water resistant rating of 200 m. Other similarities such as the red band around the crown as well as the brand logo on the head of the crown remain consistent.

This watch uses the Orient caliber 40N5A in-house movement with automatic self-winding and hand-winding movement with seconds hand halt mechanism. Utilising 22 jewels, it operates in the 21,600 beats per hour range. Below are the three different options available. 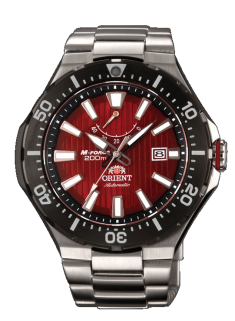 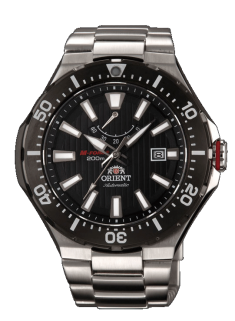 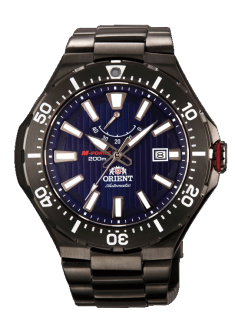 Since the first M-Force was launched back in 1997, I have been following this line very closely. In fact, the last three renditions are part of my collection. When Orient launched the previous M-Force version back in March 2013, the Titanium DV01002B, watch collectors were initially excited as Orient has decided to use titanium instead of the typical stainless steel. However, a lot of collectors including myself were taken aback by the decision of eliminating the power reserve indicator which has been part of all M-Force models.

I have to admit that my review on that particular M-Force was not flattering because of the non-inclusion of the power reserve indicator.

The powers that be in Orient heard the grouses and within a year, a replacement model is out for the market to enjoy. The power reserve is back on the dial and case is now even bigger at 49.1 mm across compared to the titanium predecessor’s diameter of “just” 47 mm.

I am aiming to get the red dial piece. It will make a good addition to my collection. For more info, please visit orient-watch.com