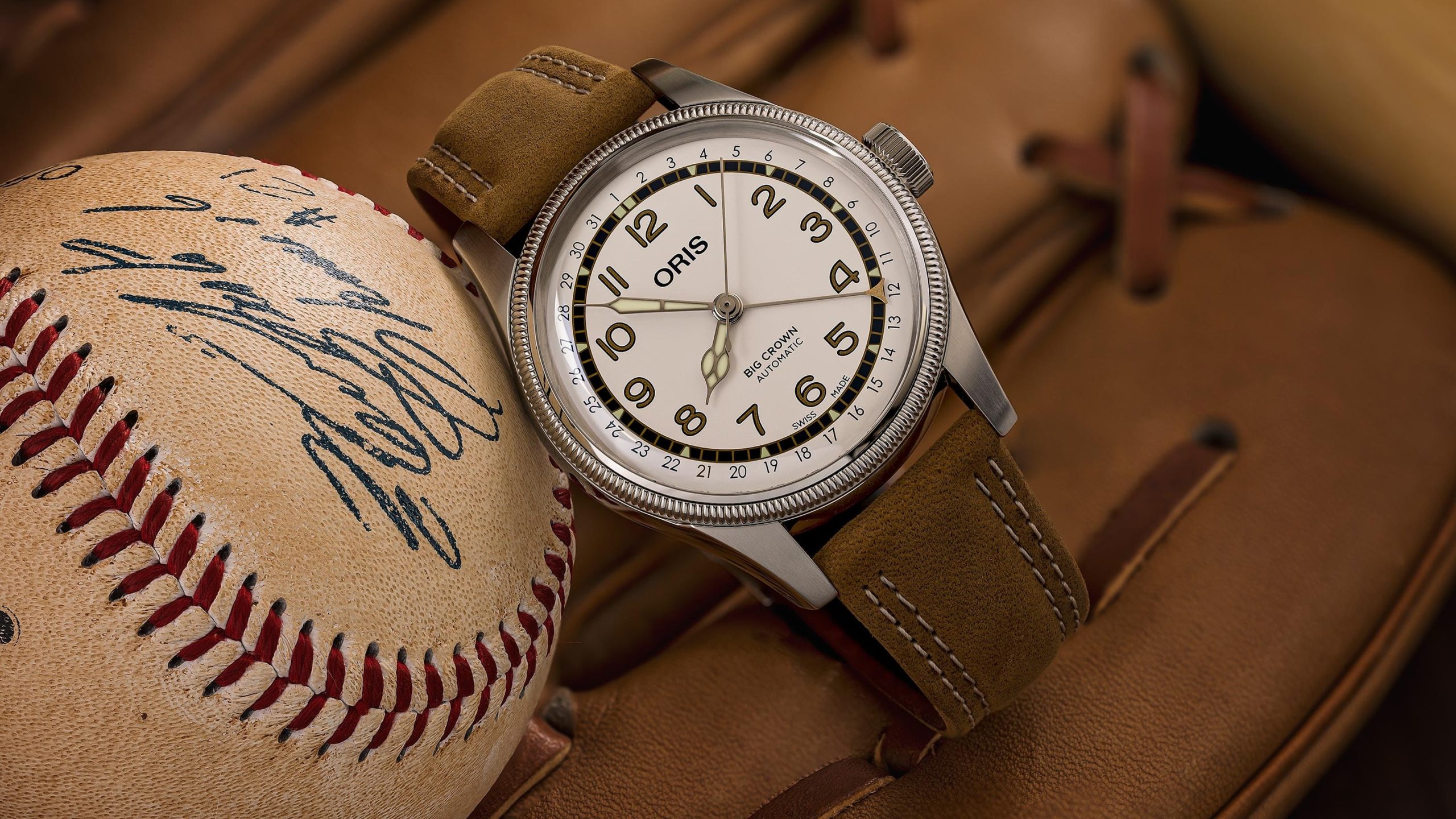 Swiss brand Oris holds a strong reputation for making some high-quality value-oriented mechanical watches. However, what makes the brand special is its constant endeavor to support noble causes. Most recently, Oris joined hands with the Roberto Clemente Foundation, a non-profit organization that is dedicated to developing leaders through education, sports, and service leadership. To commentate this partnership and pay a tribute to the baseball legend, Roberto Clemente, Oris has introduced the new Oris Big Crown Roberto Clemente limited edition watch. 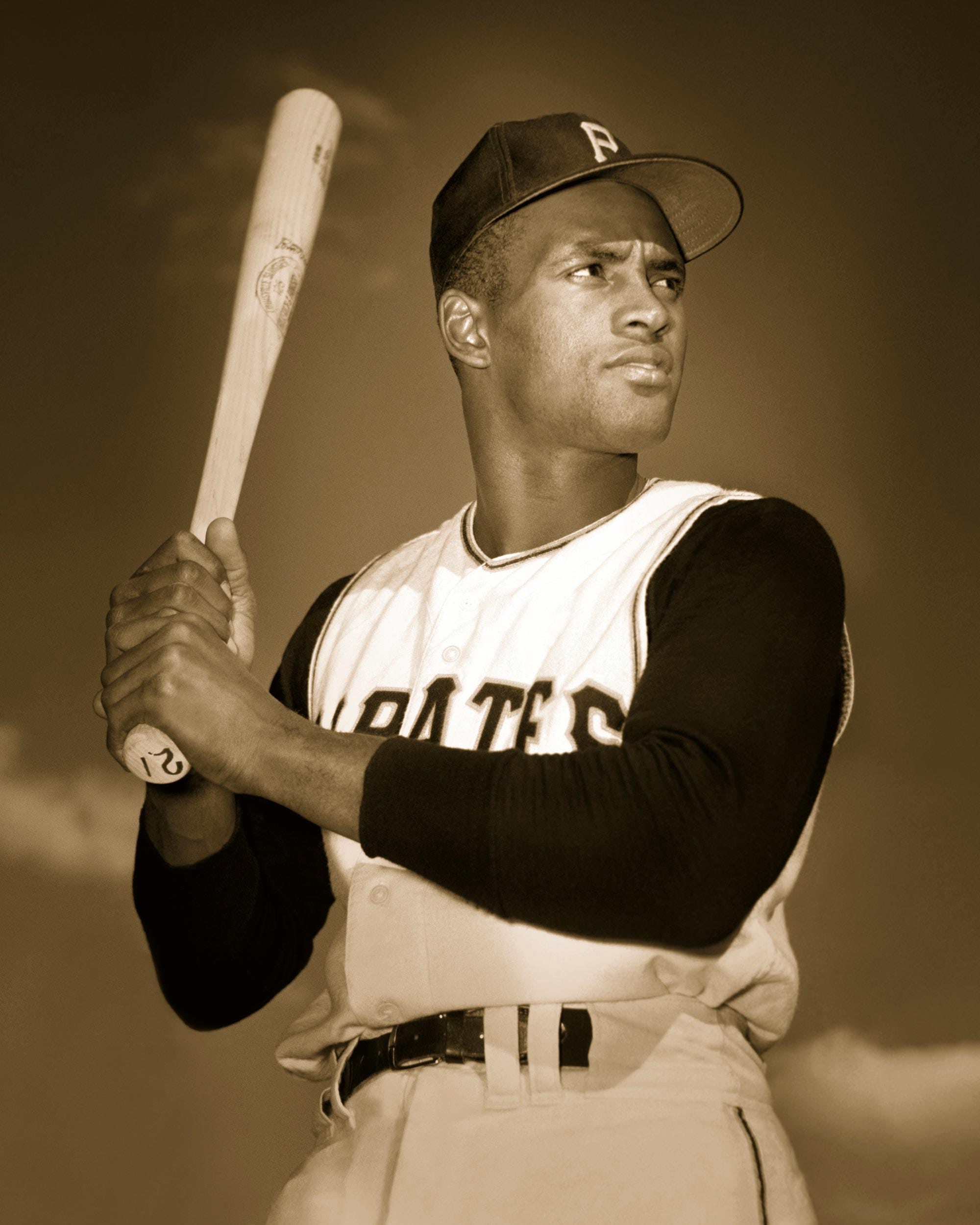 Born in Puerto Rico on August 18th, Roberto Clemente played for the Pittsburgh Pirates. During his long career, Clemente played 18 seasons in Major Baseball league and became the first-ever Latin American to score 3000 hits. He became a World Series champion twice and was a Gold globe award winner for 12 consecutive seasons. And while Clemente was a prolific baseball player, he was also an amazing human being who always extended his support towards humanitarian causes, a motto that has been carried forward by the Roberto Clemente Foundation. Now onto the watch. 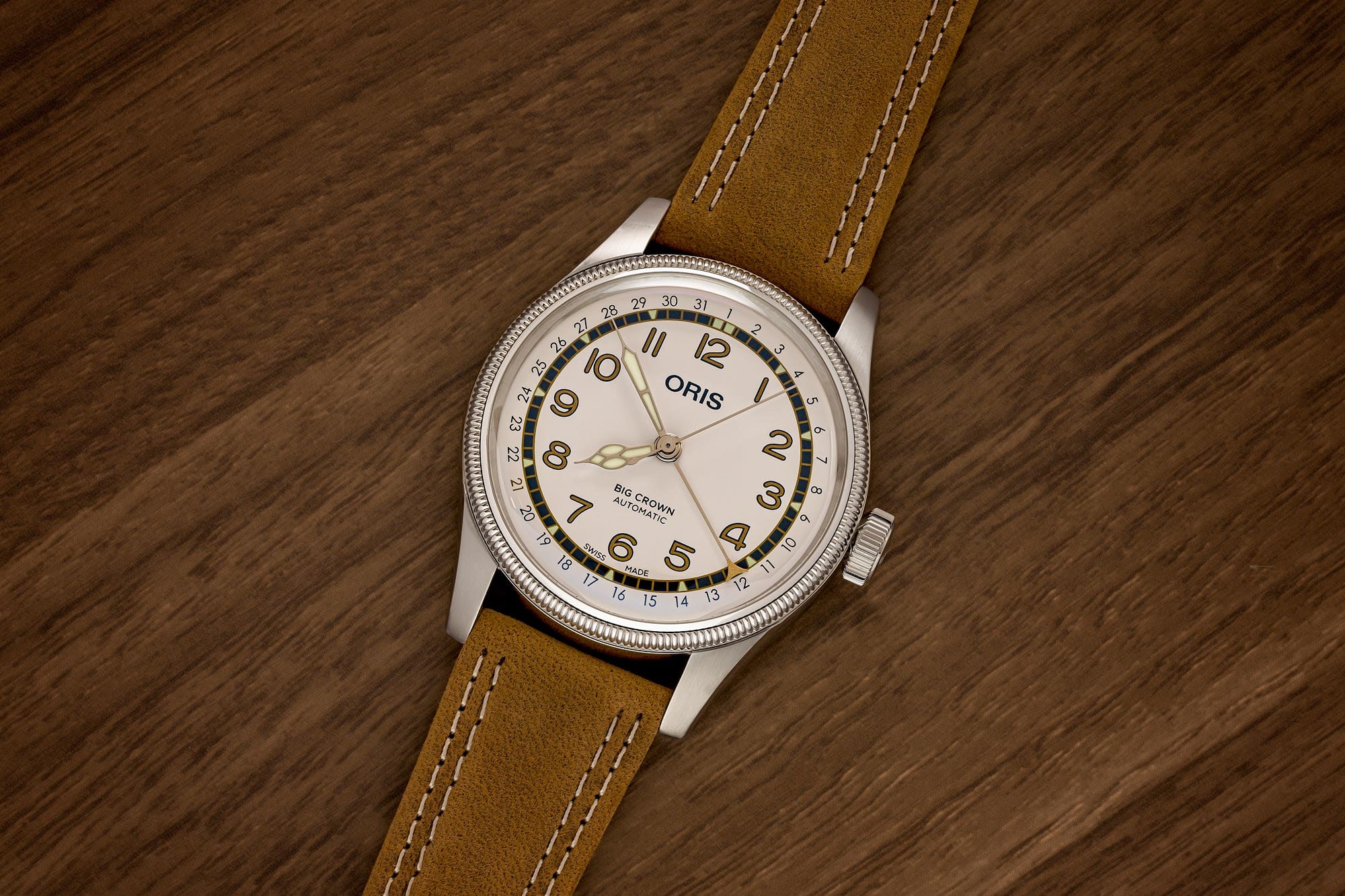 The Oris pointer date is one of the most charming watches in the Oris catalog, and the brand has made some interesting design choices to make this new watch special. To begin with, the face of the watch has been presented in a combination of white, gold, and black inspired by the jersey of the Pittsburg pirates. The base dial has been rendered in white to provide an excellent contrast to the golden Arabic numerals as well as the black rail-road style minute track. The 31 dates on the outer periphery have all been printed in black except for the number 21, Clemente’s jersey number, which has been painted in gold to stand out. The beautiful and familiar cathedral-style handset has been finished in steel, whereas the bowl-shaped tip of the pointer hand has been highlighted in gold color. 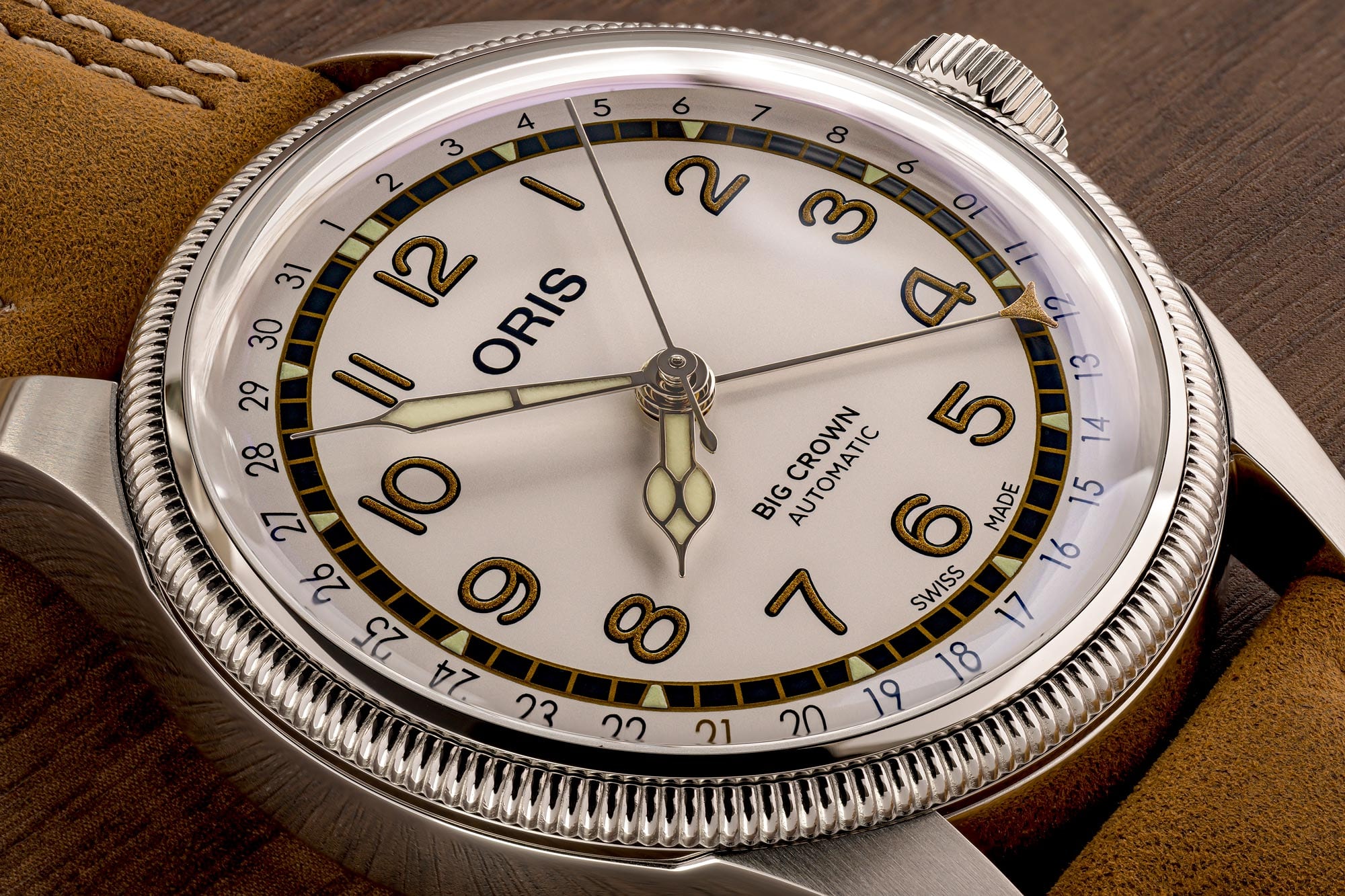 The case on the watch has been crafted from stainless steel and measures a modest 40mm in diameter. The smooth flowing lines, downward curving lugs, and the knurled bezel on top combine to lend this watch an elegant look. Flipping the watch over reveals a closed case back that has been deeply stamped with Roberto’s image along with the limited-edition number of the watch. Ticking underneath the case-back is the Oris caliber 754, a Sellita SW 200-1 based movement that has been modified in-house by Oris to incorporate the pointer date functionality. The movement operates at a frequency of 4 Hz and offers a power reserve of around 38 hours. 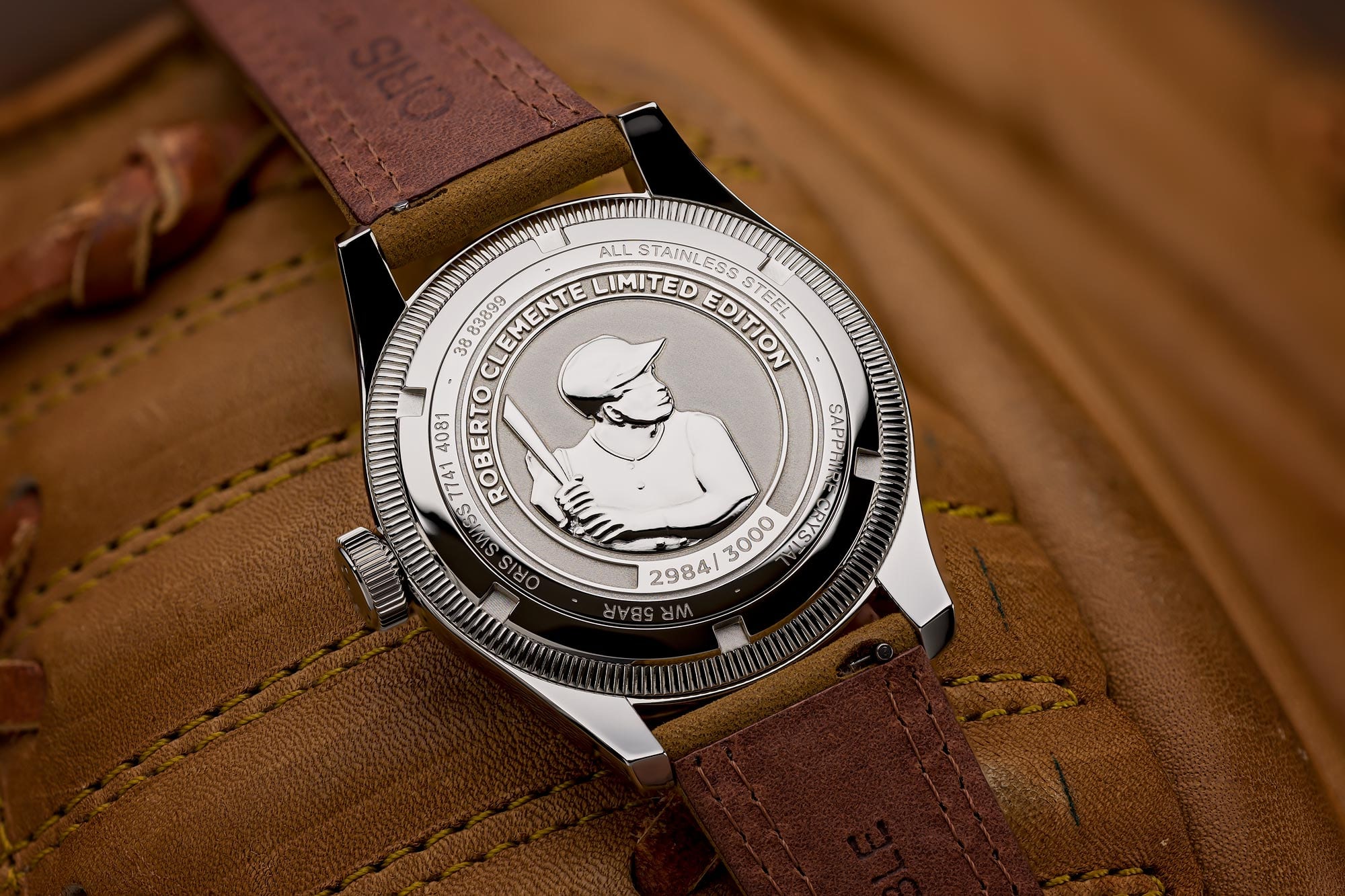 The new Oris Big Crown Roberto Clemente limited edition watch comes attached to a brown leather strap with double stitching inspired by the construction of a baseball glove. The watch would come in a special presentation box that would also contain an extra nato strap and a strap changing tool. Production is limited to 3000 pieces and the retail price has been set at CHF 1,850.