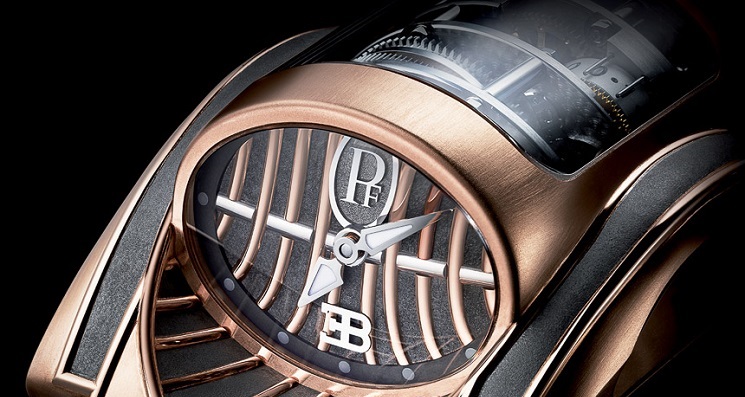 Many fans of the watch industry are aware of collaborations between watch and automobile makers, mostly Hublot and Ferrari, Jaeger LeCoultre and Aston Martin and arguably the most popular; Breitling for Bentley. However, I wonder how many know of the work going on between Swiss manufacturer Parmigiani and the Volkswagen owned French speed legend Bugatti? They’ve worked on other pieces before, such as the Aerolithe Flyback Chrono, but now they’ve got something new and I have to say, it’s very reminiscent of the Hublot MP-05 LaFerrari without the tourbillon. But that’s a good thing, right? 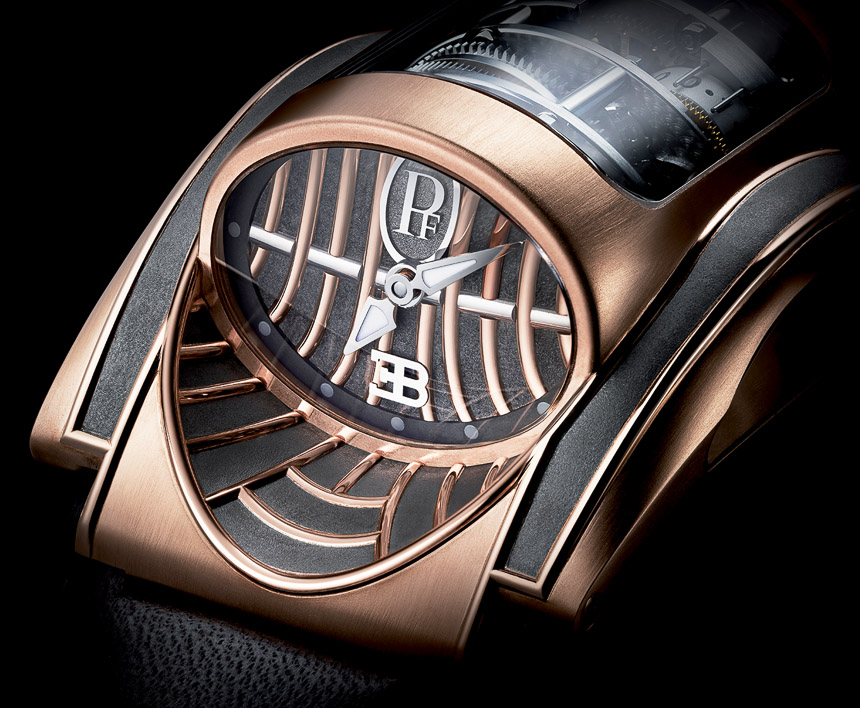 I’ll say. If nothing else, we get a marvellous topside view of that in house movement that is more than happy to display the silver coloured and gold cogs and wheels in all their sparkly glory, winking at any passers by who happen to glimpse upon them as they go. But showiness is nothing if the watch can’t actually tell time. 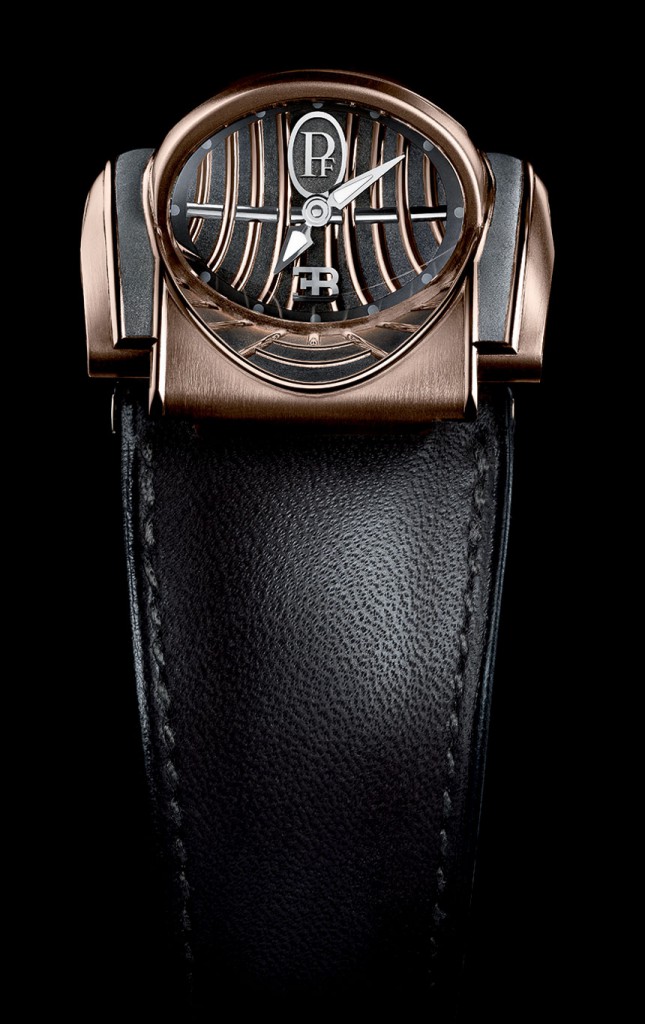 “Ah, if it’s anything like the Hublot it’ll be hidden in all of those barrels somehow” I hear you say. Well, it only shares the horizontal design aspect with the Hublot, and the automobile link of course. Unlike the Hublot, the Bugatti Mythe by Parmigiani displays the time as an analogue clock mounted to the end of the watch, looking like it belongs on the dashboard of a Veyron, rather than on the end of the watch itself. The face is an oval shape, the same as the EB logo and has both vertical and horizontal lines running across it that are designed to be reminiscent of the metalwork in the front grilles on the Bugattis of old with short and wide lancet hands with some lume applied. However, it’s design does slightly remind you of the stitches on a American football. And let’s not forget that Ford has an oval shaped logo too, luckily Parmigiani thought of that too as it’s put the EB logo on there too. Isn’t that thoughtful? 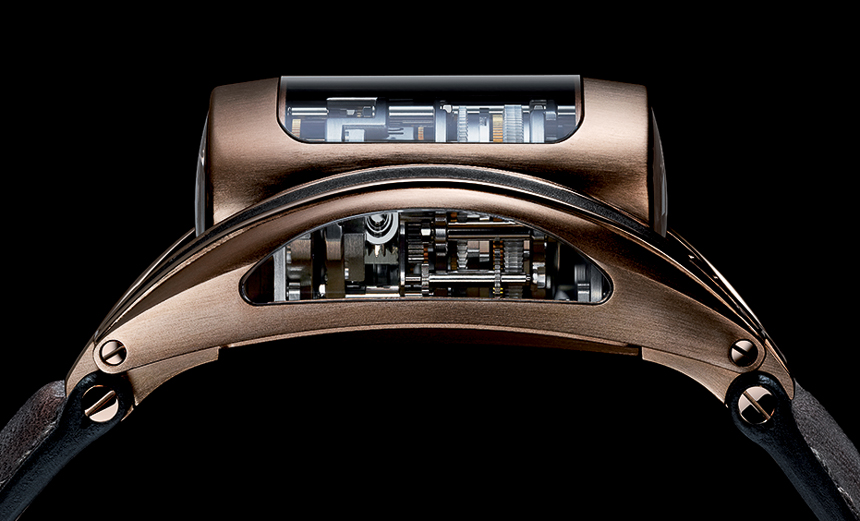 If all that Swiss/French cleverness wasn’t enough, there’s also a crystal on each side, so you get a lovely view of that’s happening inside the watch from the side as well. My only concern with it is that although it’s very useful to tell the time if you’re holding a cup of coffee and you need to check the time without spilling it, the position of the clock face itself could be a nuisance. But then again, this is a masterpiece, to be enjoyed for what it is and not so much what it can and can’t do because on the functions term, it’s pretty basic. On the other hand, that doesn’t detract from it’s striking appearance. 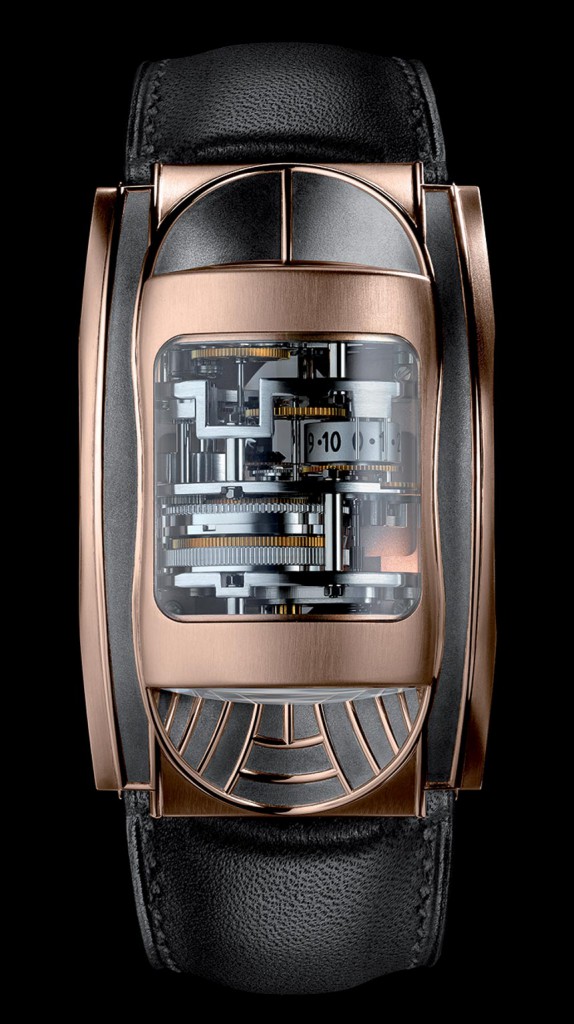 For those who are also considering the Hublot MP-05 LaFerrari but find it a bit hard to understand then you should definitely consider the Bugatti Mythe too, plus the leather strap makes it seem a bit more like a consummate professional in the office, unlike the Hublot which you could consider to be the newbie that’s trying to impress his boss. Introduced at the 2014 Concours d’Elegance, the Parmigiani Bugatti Mythe has a 10 day power reserve with the days indicated on one of the barrels in the top right. It’s 52.5mm long, 32.4mm wide and stands a powerful 18.6mm tall.

Think of it as the Burj Khalifa compared to a Big Ben like ultra slim watch such a Vacheron Constantin. To top off that height it costs a lofty $430,000. That’s almost half of a Bugatti Veyron! But it is waterproof to 100 metres and has a rose gold and black ruthenium case. Ultimately it’s up to the buyer to decide whether that’s enough to justify it. All I know is it definitely deserves it’s own exhibition in the museum of Ettore Bugatti. For more info, please visit parmigiani.ch