The Seiko SBDY001 Field Watch was launched by Seiko back in 2010. This is the first watch using the 4R35 movement that has hand winding and second hand stopping capabilities. The design Seiko decided on this Prospex model is that of a “field watch”. It was envisage that explorer scientists would be the primary users of this watch and it comes equipped with a magnifying glass that can be flipped open.

This watch is a JDM (Japan Domestic Model) unit but interestingly, I found it in another country than Japan. It is very seldom you find Seiko Prospex models being sold outside Japan. 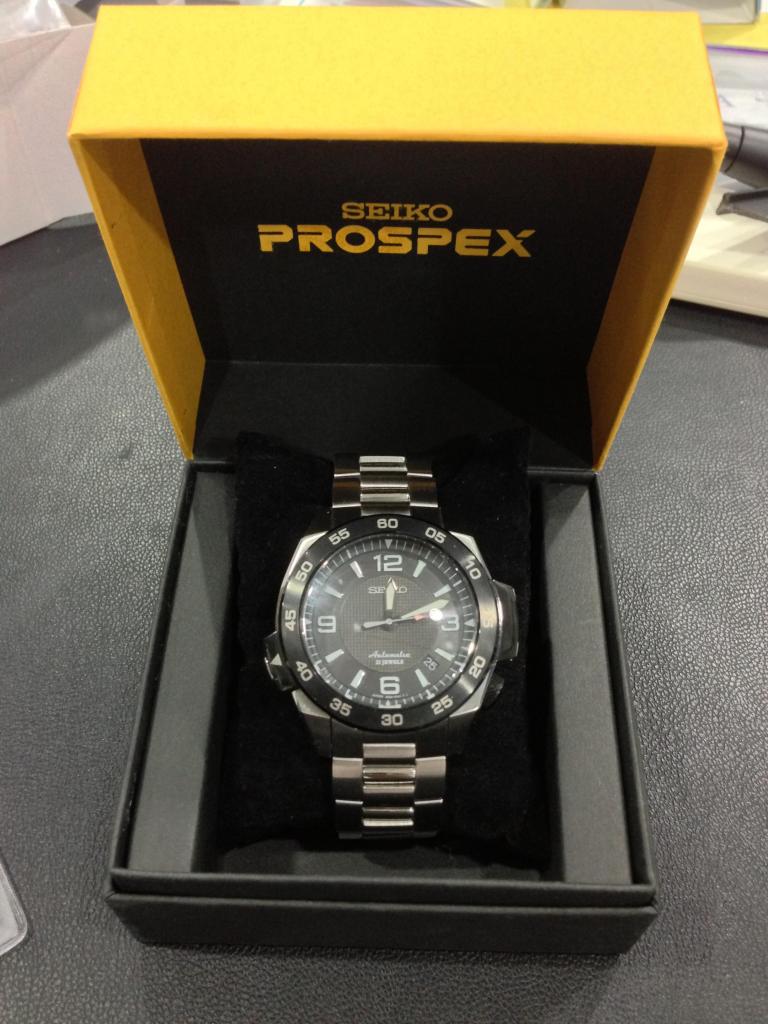 Protected by the black/yellow box synonymous with the Prospex series, the watch looks majestic in it. The plain dial and the black bezel in contrast to the stainless steel casing and bracelet give an aerodynamic feel to it. The red tipped second hand is a nice touch as it provides a point of focus on the watch.

This is a fair sized “field” watch in my view. With a diameter of 43 mm, almost everyone should be able to wear this watch. It was good that designers in Seiko decided against producing a watch larger than 43 mm which is the norm nowadays. Nevertheless, it is thick at 15 mm and the “fatness” does show.

To help obscure the thickness of the watch, Seiko designers decided to use the 22 mm lug size instead of 20 mm which is typically used in other Prospex models. This provides the necessary “balance”. 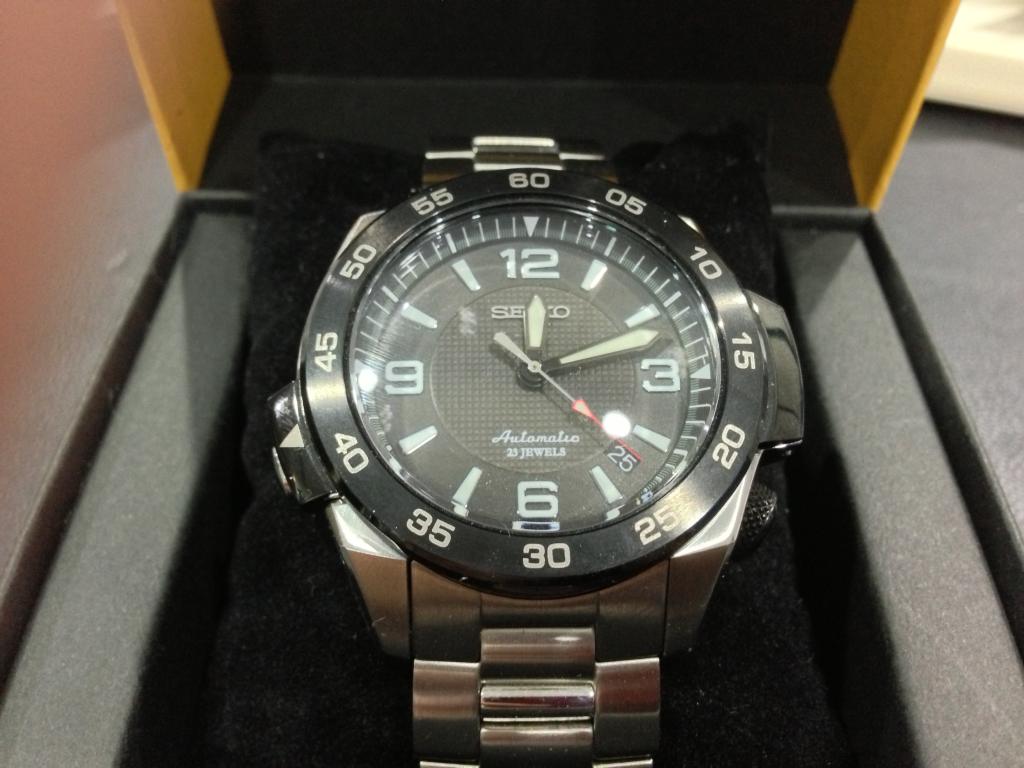 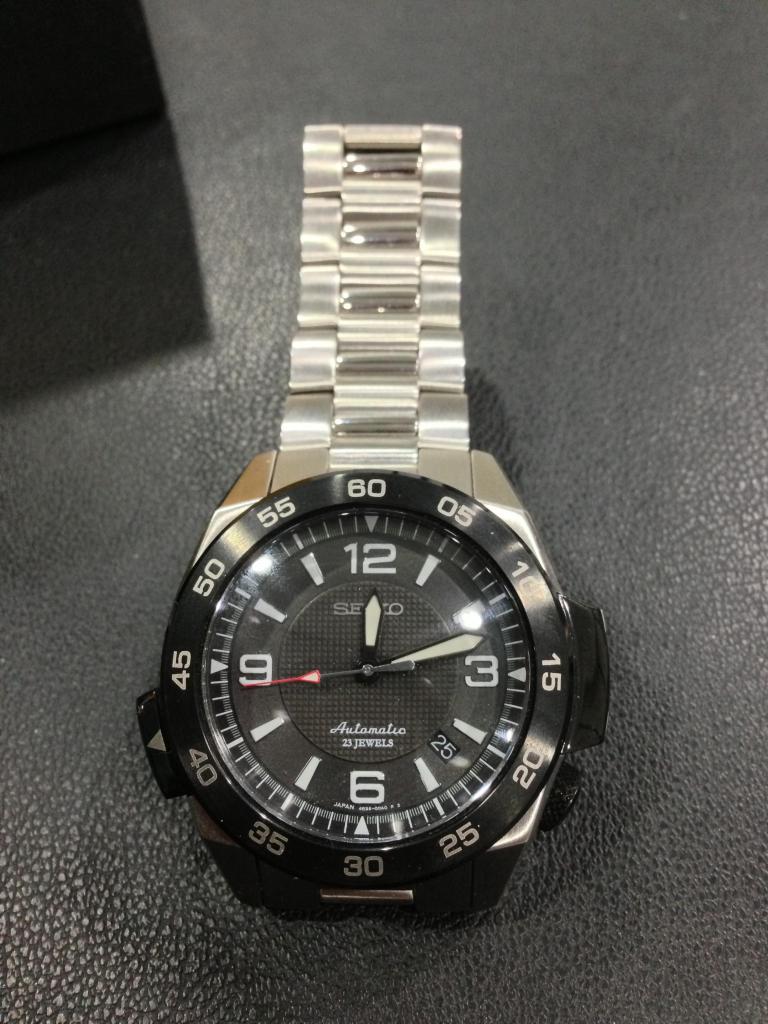 The dial is black with a central disk that is textured. It has three hands that are fully lumed. Arabic numbering on the four corners of the compass while the rest are indexed (5 minute intervals). Both indexes and numbers are lumed. At the edge of the dial, a second set of indexes is made available at minute intervals.

This watch comes with a date function. Instead of substituting one of the indexes to be the date window, a standalone date window is located at the 4:30 position. I prefer this placement as none of the lumed indexes or numbers is eliminated. For a lumed shot, you get the full effect instead of gaps. 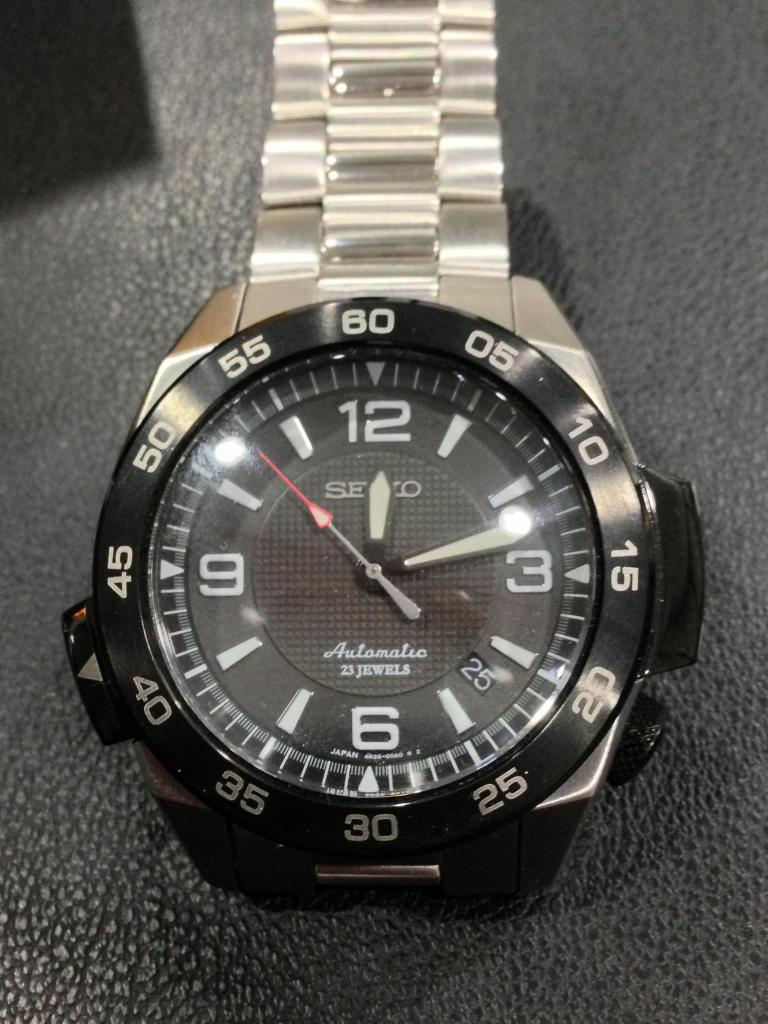 The black bezel has Arabic numbering in 5 minutes intervals. It is a permanent bezel and cannot be turned. The cursive “Automatic” on the dial signifies that it is a special tool watch for Seiko. 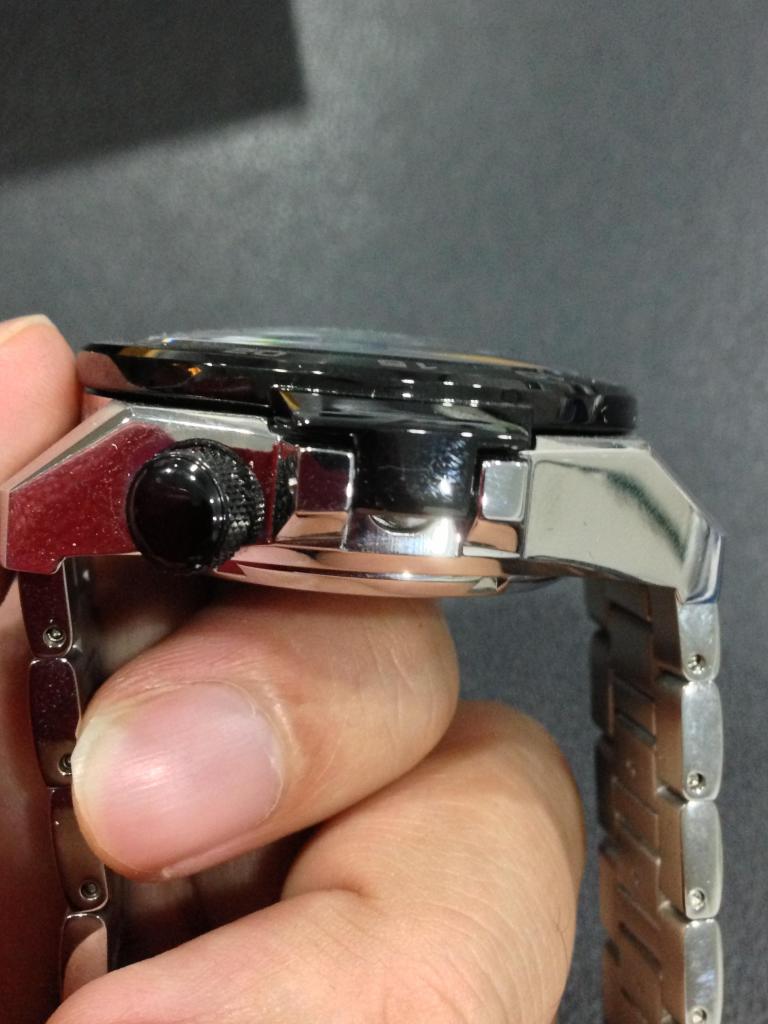 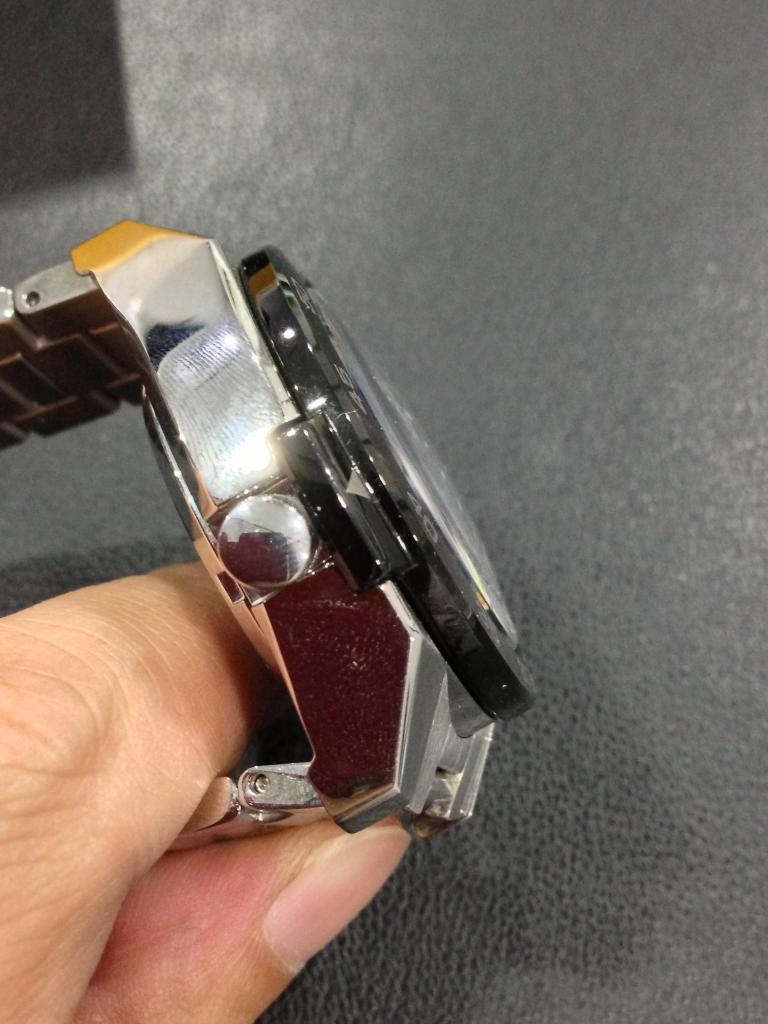 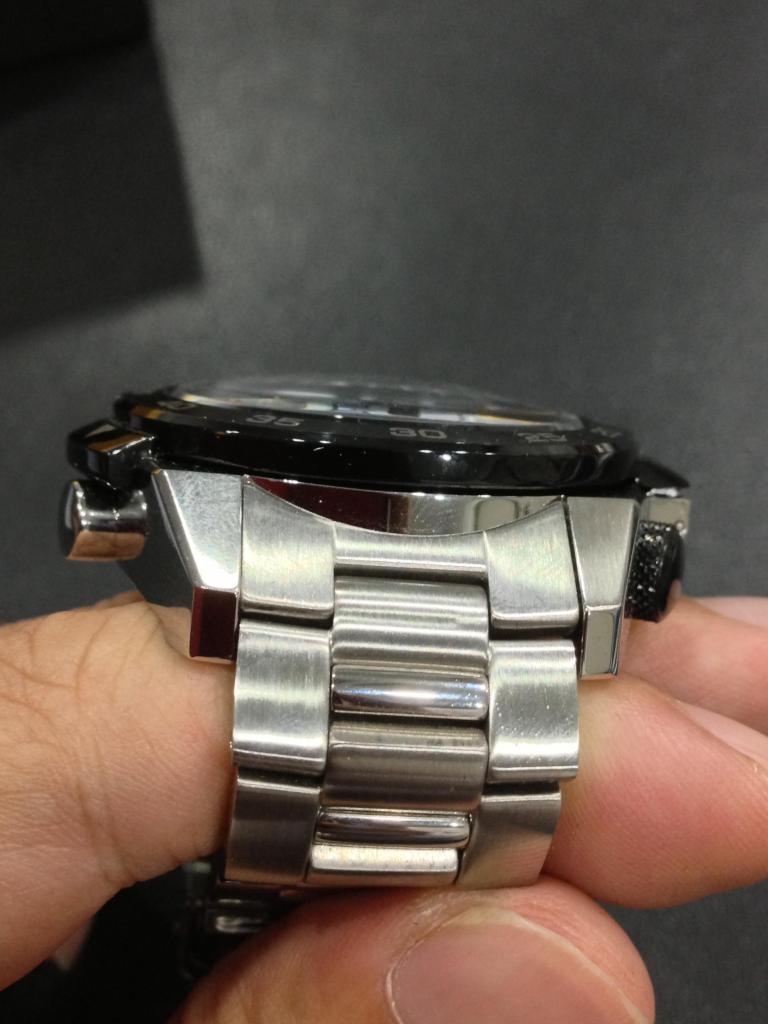 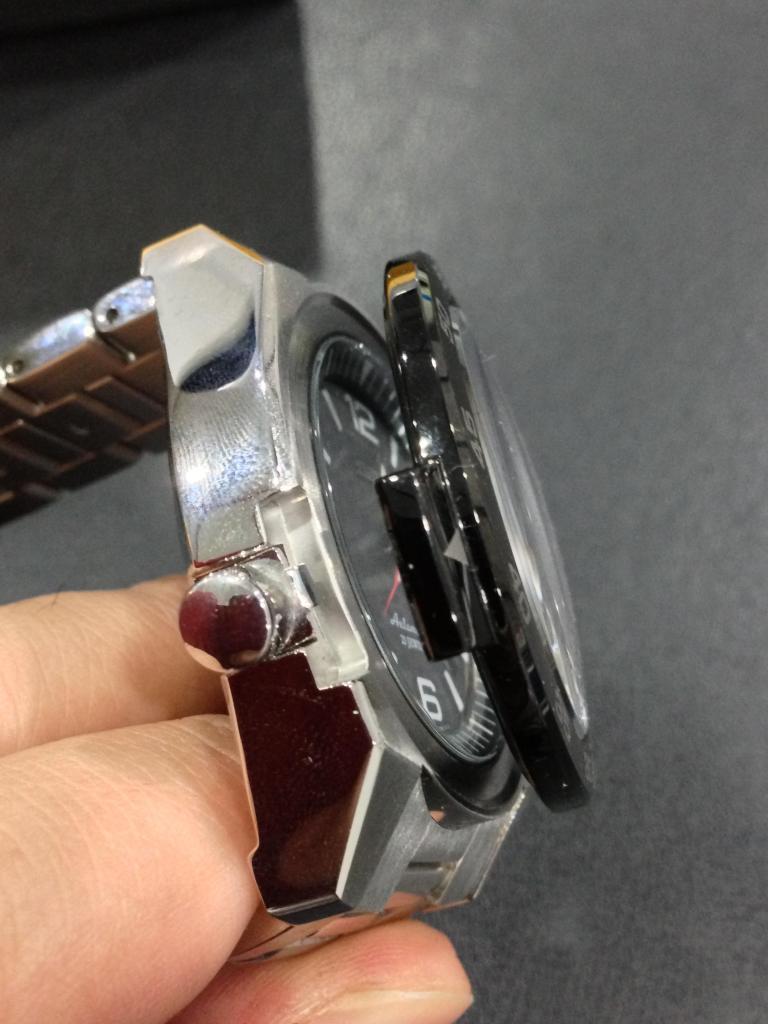 This crown is painted black and knurled but not signed. I was made to understand that the black paint on the stainless steel is PVD treated with a special chemical mixed by Seiko. Not DLC but something with similar properties.

To those of you that are ardent Seiko fans, from the side profile shots you would notice the similarity to the Seiko Samurai. Also, the links, clasp and diver extension are all similar to the Samurai’s bracelet. Only the end link is different because it takes regular spring bars rather than the thick ones. Hence, its nickname: “Seiko Field Samurai”.

The crystals used for the watch is Hardlex, an artificially created crystal proprietary to Seiko.  Below you can see the magnifying glass fully extended. 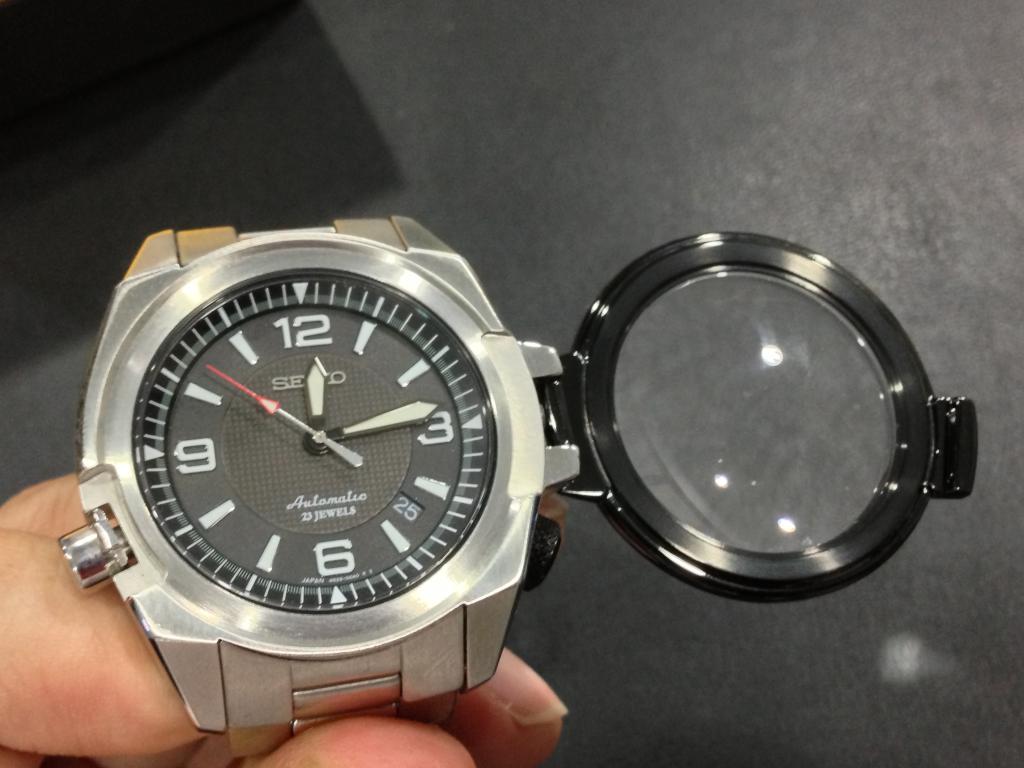 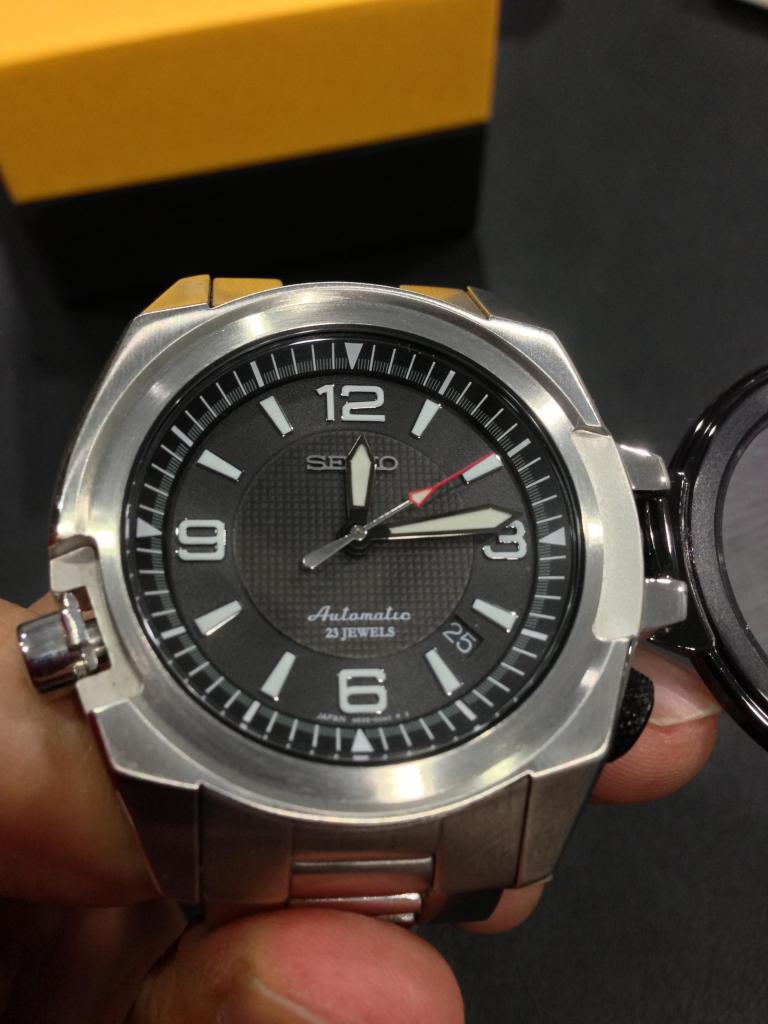 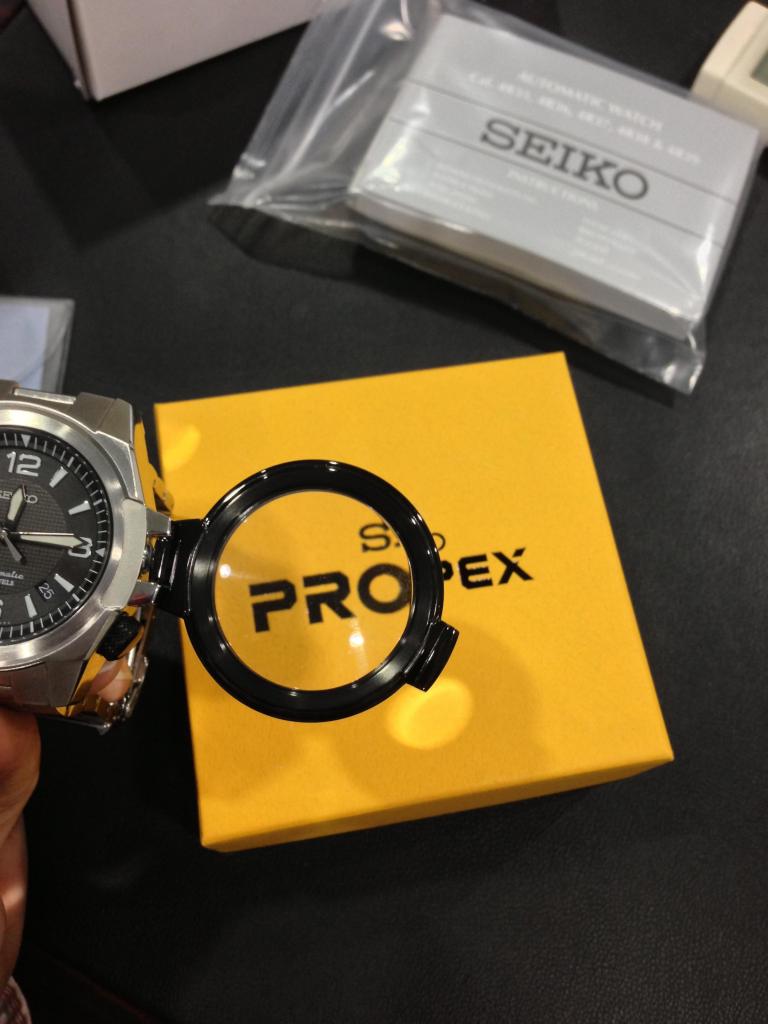 The magnification of the magnifying glass is estimated to be 3 times. More than sufficient to see things in detail as well as start a fire. This I can confirm. I’ve tried using it to burn using the sun’s rays and it worked. I am proud to announce that this is the only watch that can make fire!!

The watch comes with see-through case back where you can view the 4R35 movement. Unlike the 6R15, the 4R35 movement does not come with decorated rotor. This movement operates in the 21,600 vibrations per hour category. Comes with 23 jewels and has a power reserve of ~41 hours.  This movement is design to fit between the 7SXX and the 6RXX movements. Although there are a lot of negative comments from bloggers about this movement, I don’t find any problems with the movement to warrant such derision. 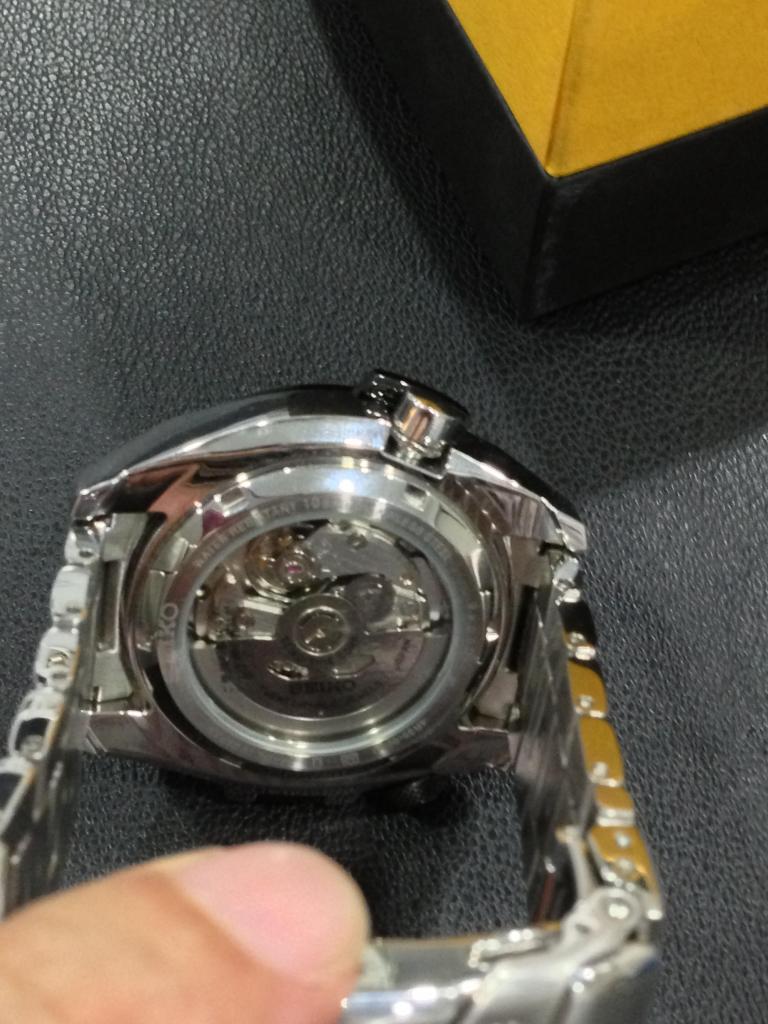 The 22 mm bracelet of the SBDY001 comes with a diver’s extension. This fact is a mystery to me since this watch is not designed as a diving watch. In fact, this watch has a water rating of just 100 m and without a screw down crown, I won’t dare use it for anything more than a dip in a pool.

I suspect Seiko added the extension to help adventurers put on the watch over their cold weather jackets. If this is true, it’s a pity Seiko didn’t mentioned it as such.

This watch uses the pin-and-collar system which requires you to be careful when sizing the bracelet. 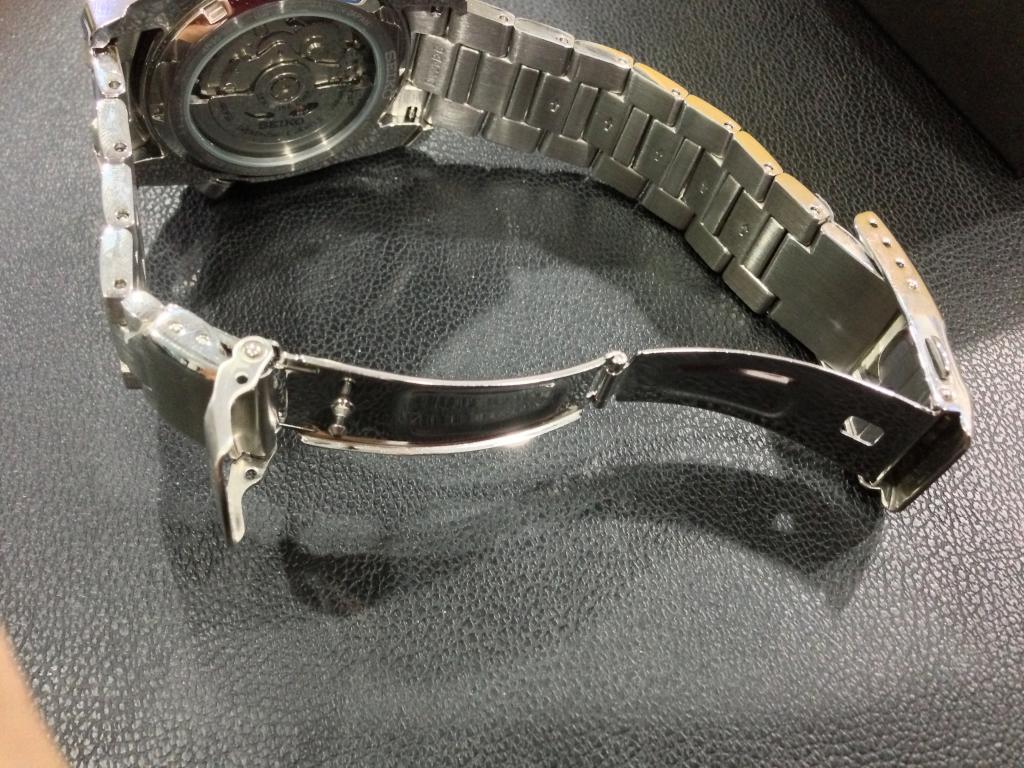 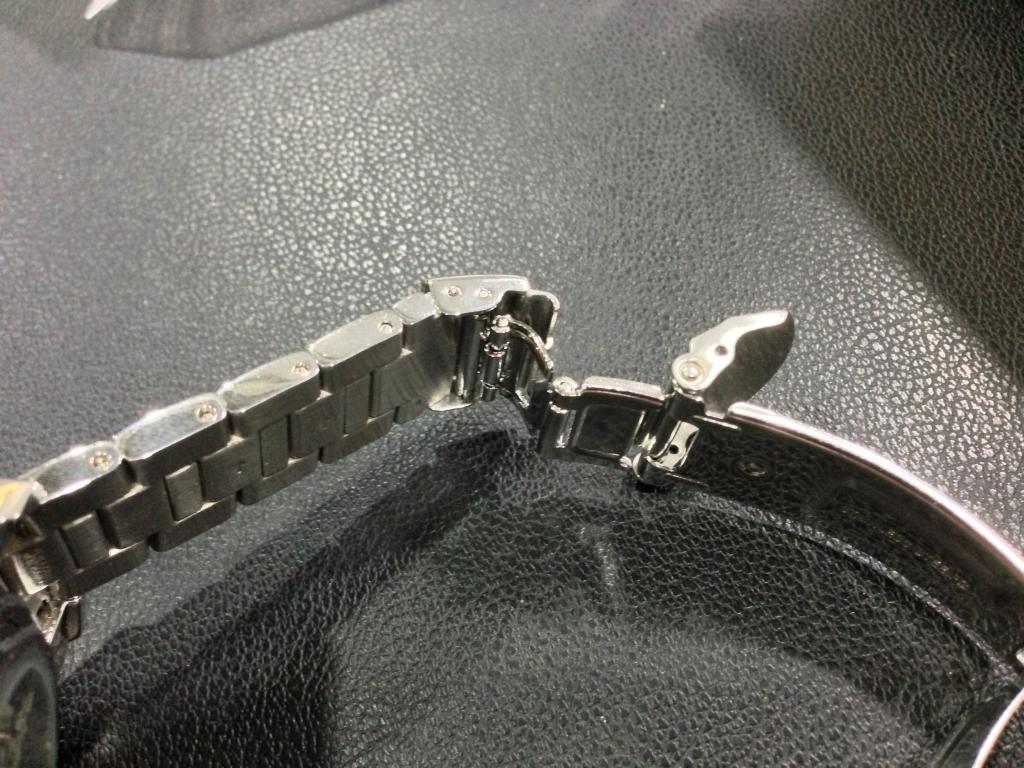 Despite the size and thickness, the watch looks balanced on my wrist. The use of a 22 mm bracelet instead of the typical 20 mm was a smart move by Seiko. The dome crystal which is obvious from a side view perspective is “Panerai” like. 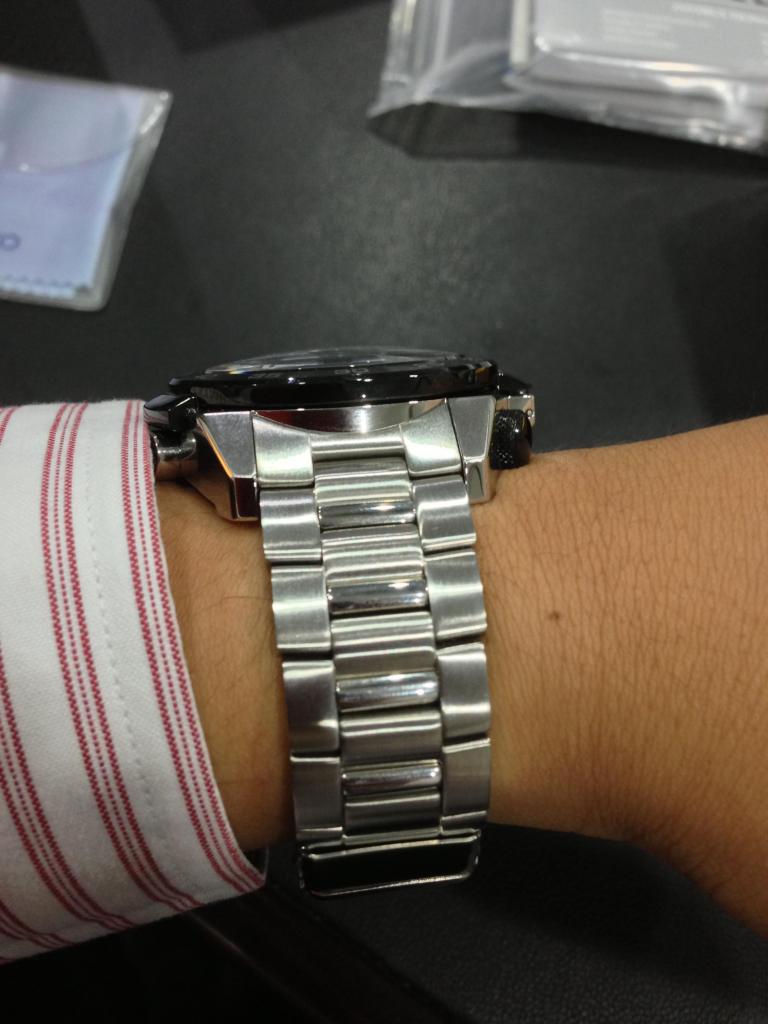 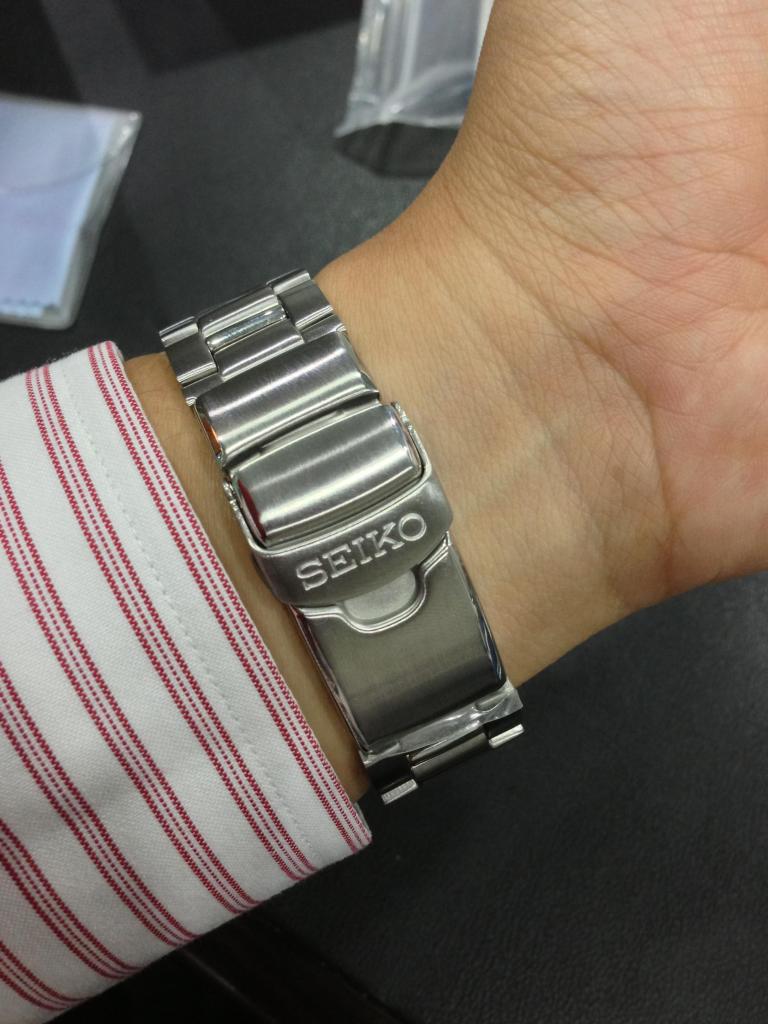 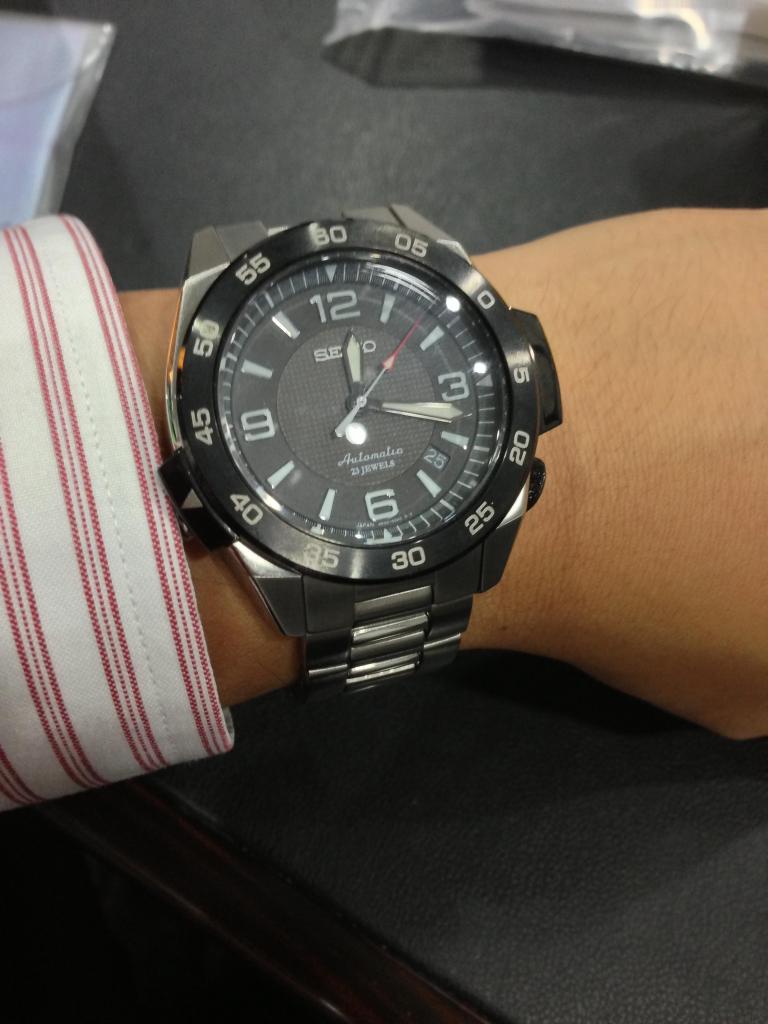 The manufacturing quality is first class. It has a useful tool and therefore it deserve its placing as a member of the Perspex group. I know a lot of people have a different view about this but I believe Seiko did the right thing.

It is comfortable to wear and it easily slips under shirt cuffs. This makes it an all-rounder as it can also be used in a formal setting.

As a final photo, a lume shot of the dial. 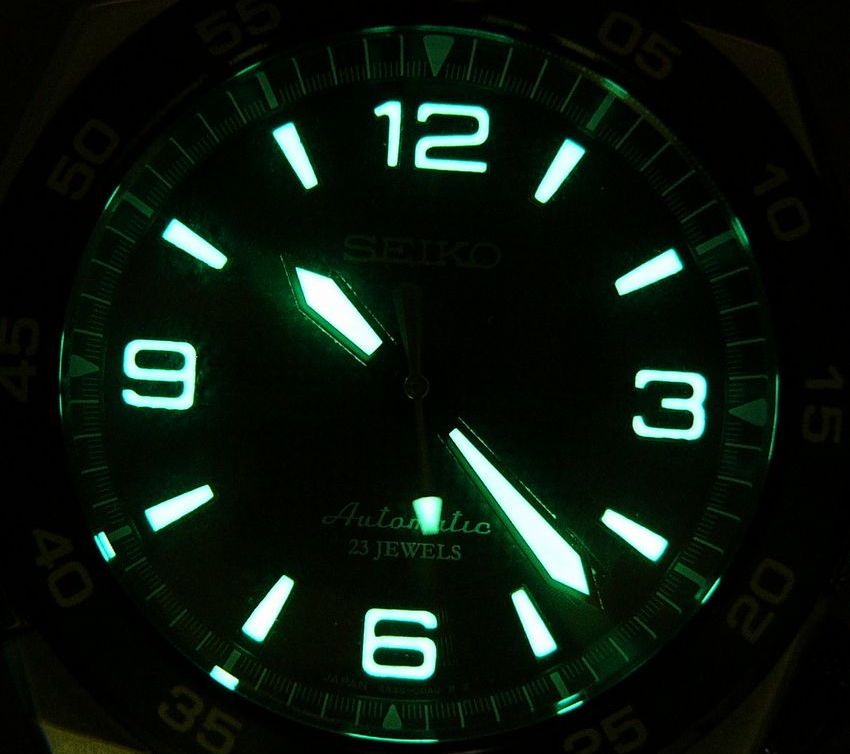