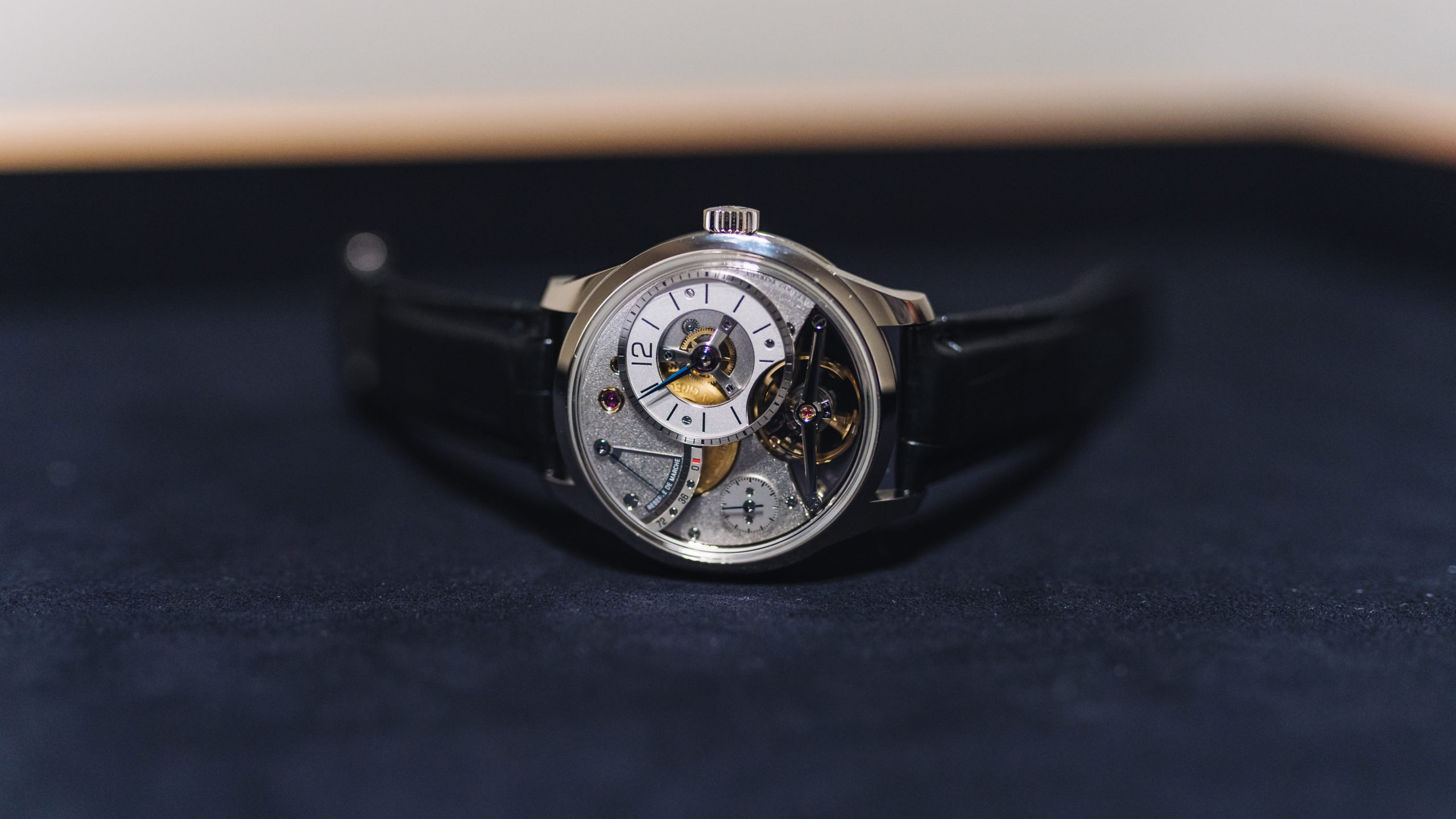 One of the brands everyone was watching during SIHH was Greubel Forsey, and rightly so. Having to keep up the reputation of being makers of some of the world’s best watches isn’t easy, so whatever watch Greubel Forsey releases must be extremely special and very beautiful. Luckily, they’ve done an excellent job of it this year, let’s take a look. 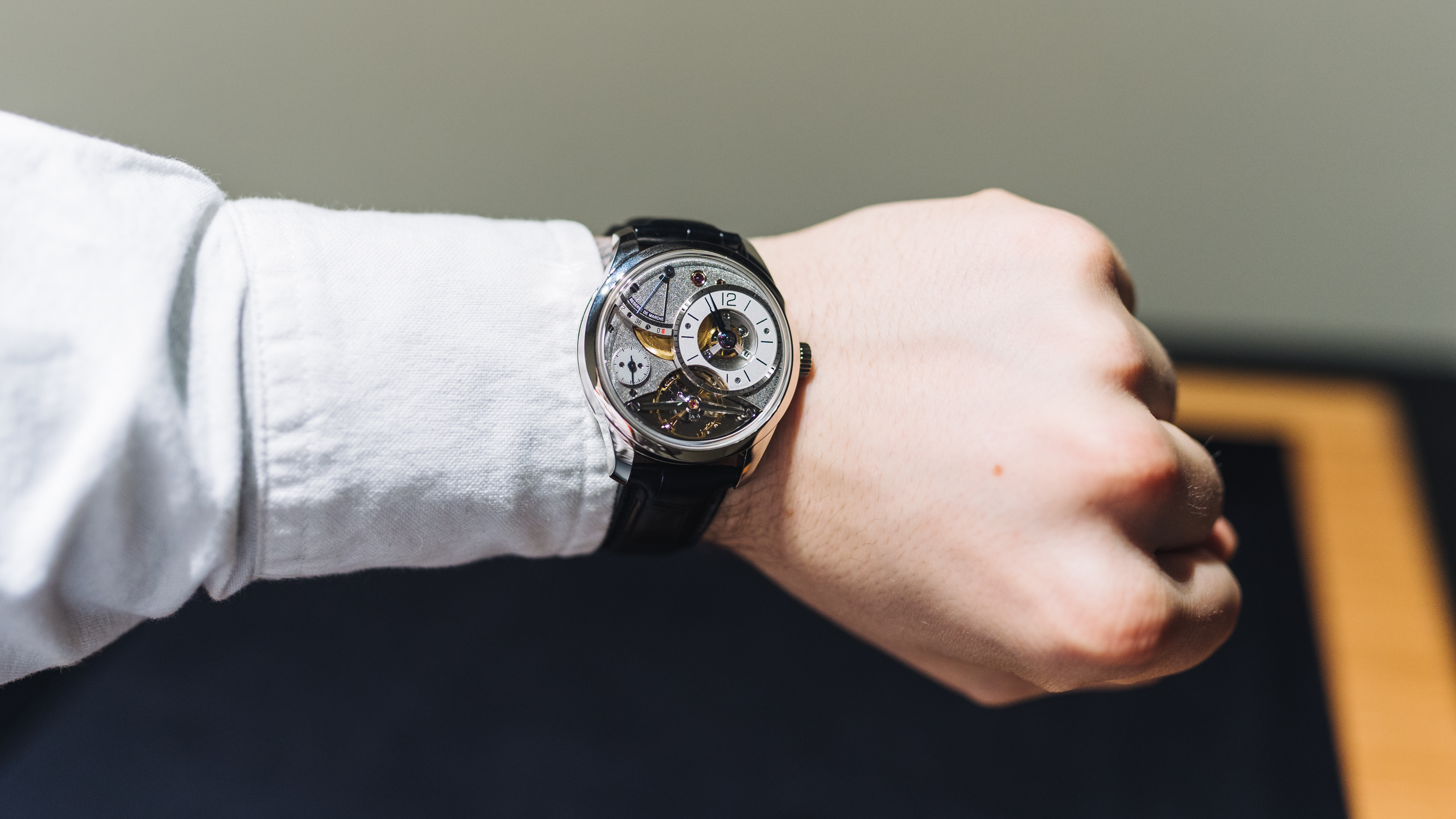 Saying that a Greubel Forsey watch is ‘entry level’ is the same as saying that about a Bentley. It’s the least equipped of that marque, but yet it is still way more than your standard run-of-the-mill product, and it’s the same here. In 2016 you might remember Greubel Forsey unveiling the Signature 1, which was to be their ‘least equipped’ piece, now the Balancier Contemporain has come along to offer a different style. 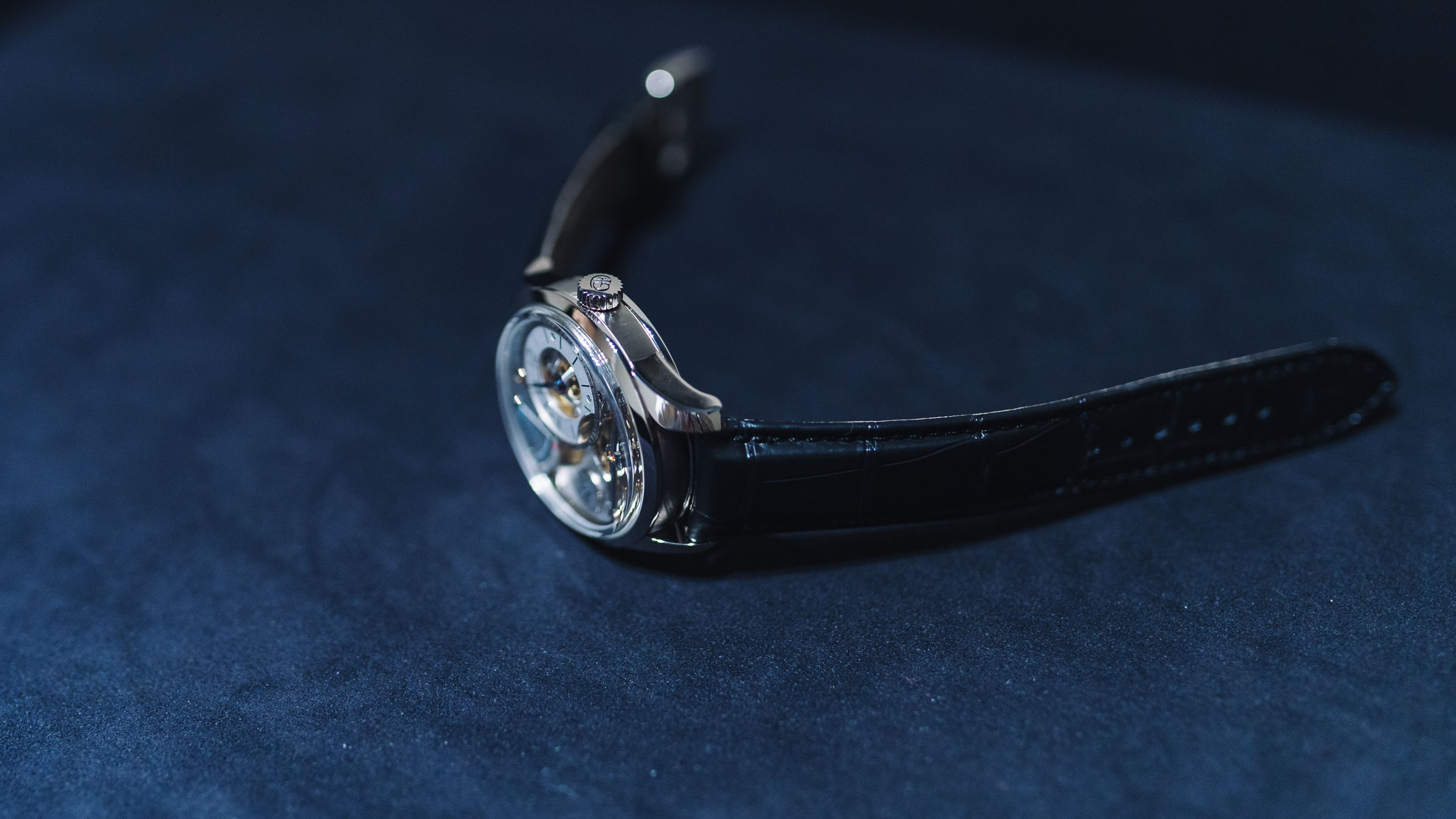 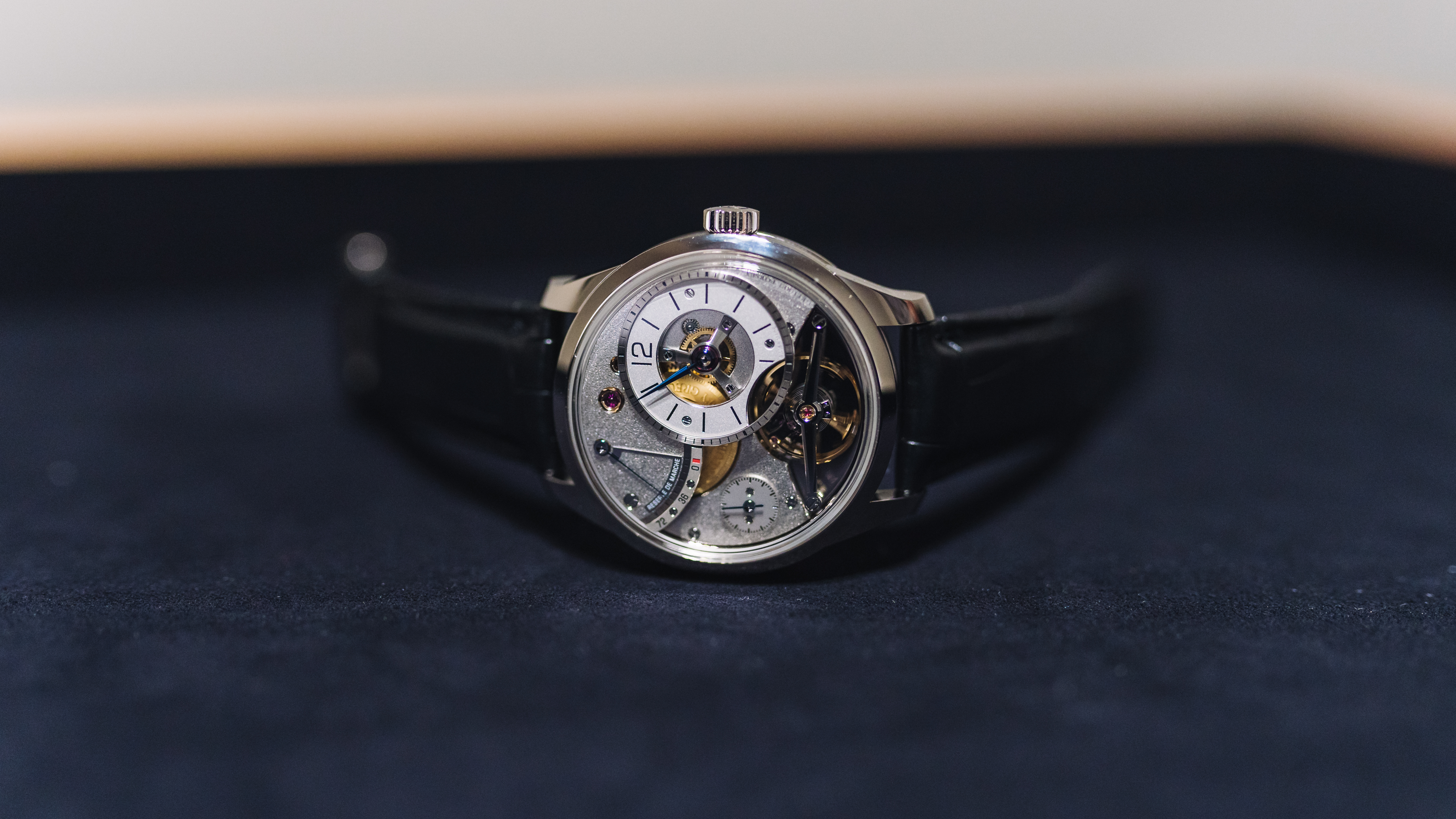 The Balancier Contemporain offers an open and clean dial layout, with the large balance wheel exposed at the six O’clock position, the time dial itself has been nudged over to one side and hollowed out so we can observe a small part of the watch’s inner workings. There’s a small sub seconds dial too, situated below the power reserve and on another plane. These depthy watches look fantastic on the wrist but make it troublesome for us journalists to photograph well, but we love a challenge! 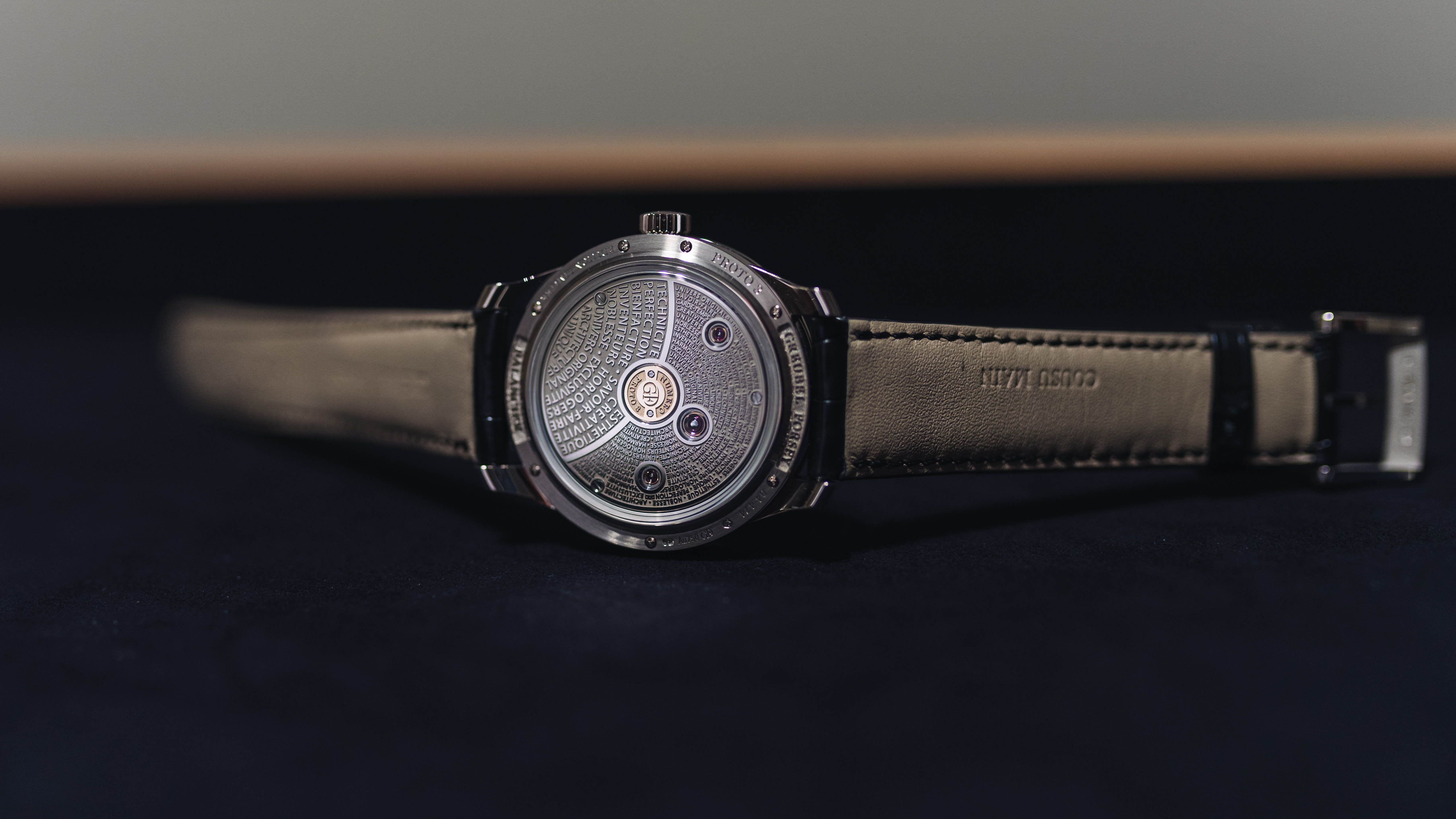 The back of the watch shows the brand’s values inscribed across a plate which covers the entirety of the open caseback, only three chatons are visible here. The watch case is 39.6mm in diameter and constructed of white gold, with diamond setting possible as well that will push up the price of 195,000 Swiss Francs even further, though to what level we don’t know yet. This watch is limited to 33 pieces. 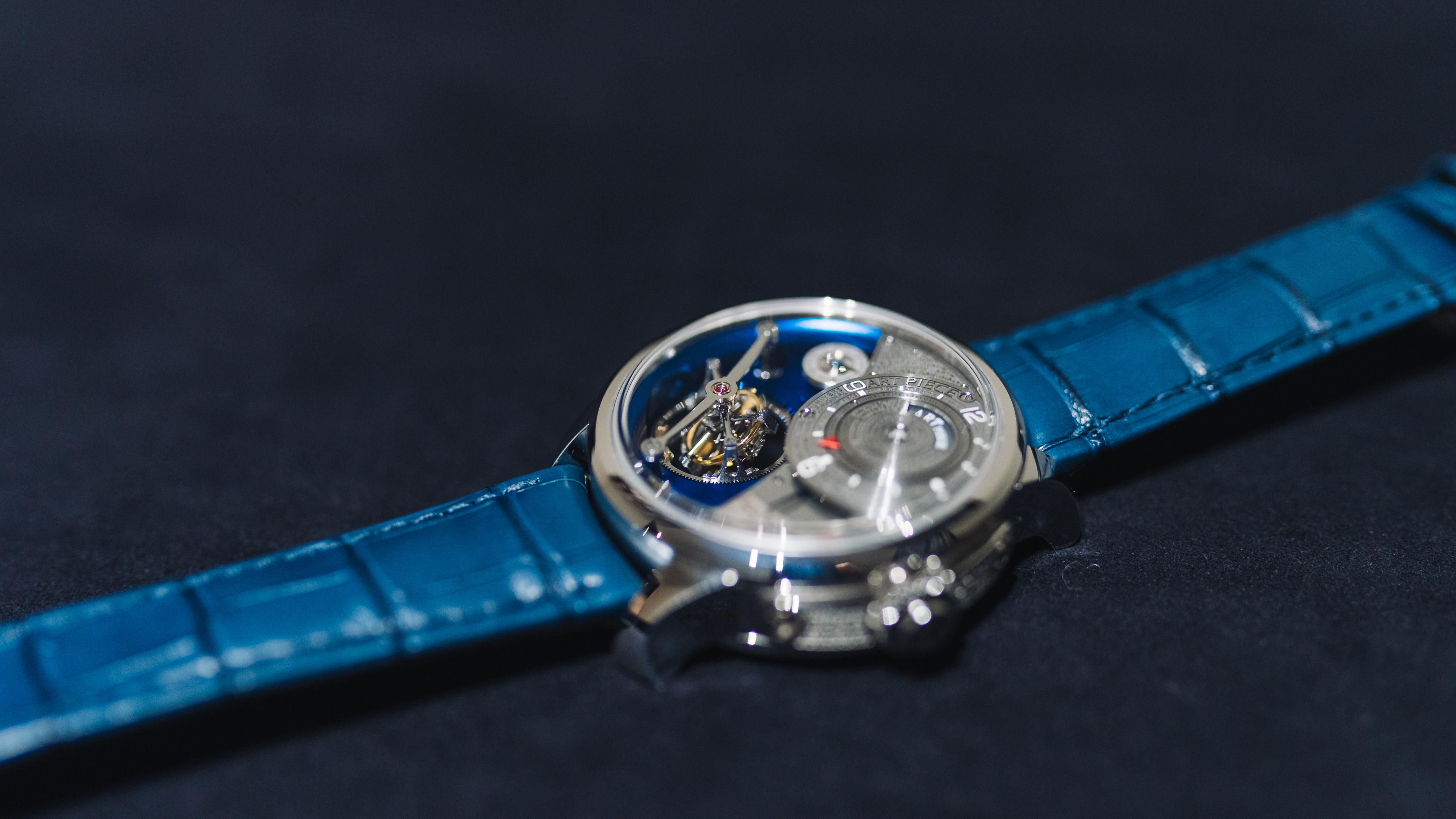 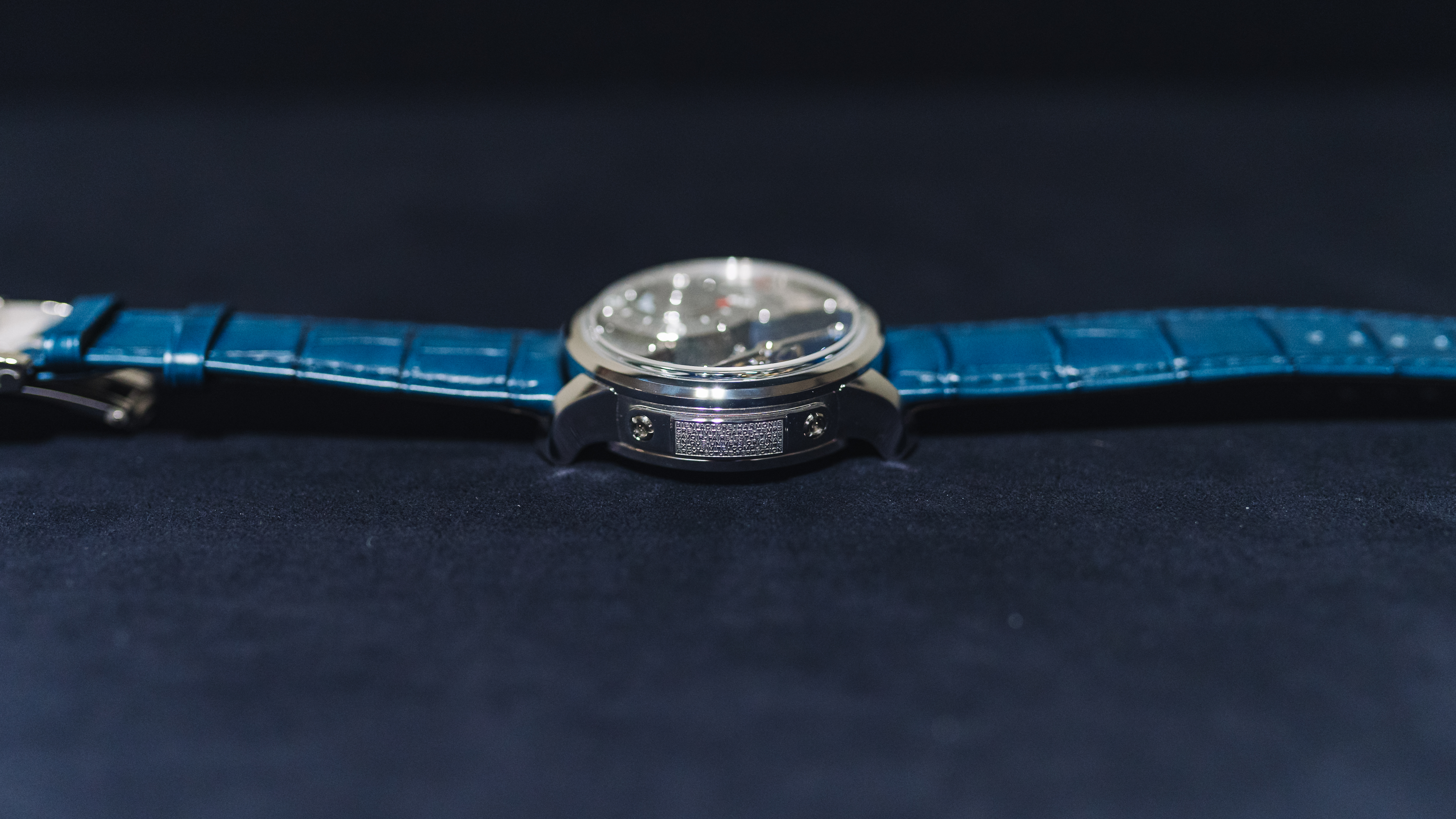 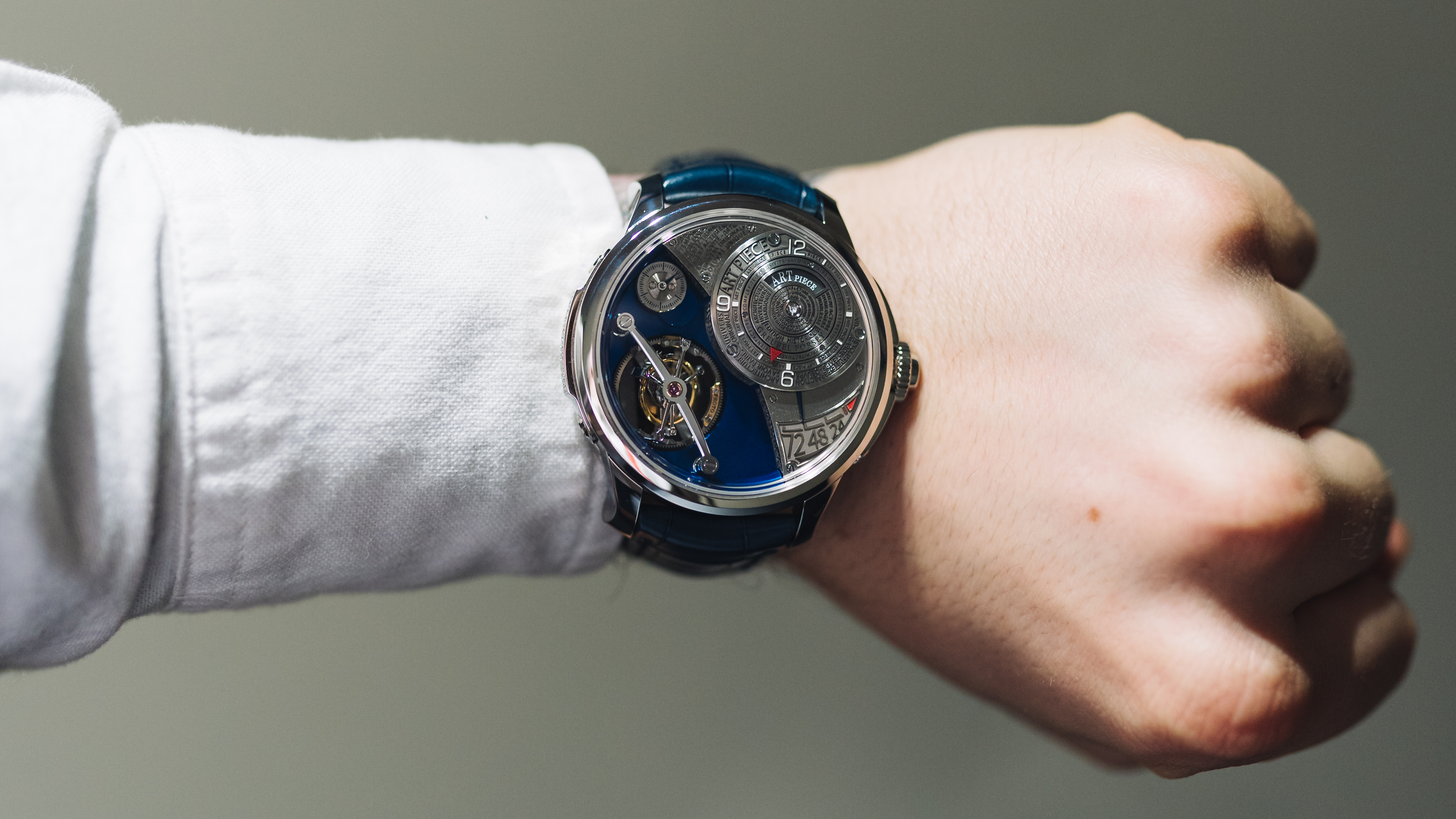 Perhaps the flagship range of the brand, the Art Piece line shows Greubel Forsey’s skills as not only master watchmakers but master engravers as well. The engravings speak for themselves, but the clever mechanics of the piece can be easily missed at a glance. True, it would be hard to miss the double tourbillon set slap bang in the middle of the frosted blue plate, using a tourbillon inclined by 30 degrees inside a cage which also rotates to remove the effects of gravity in any position theoretically. 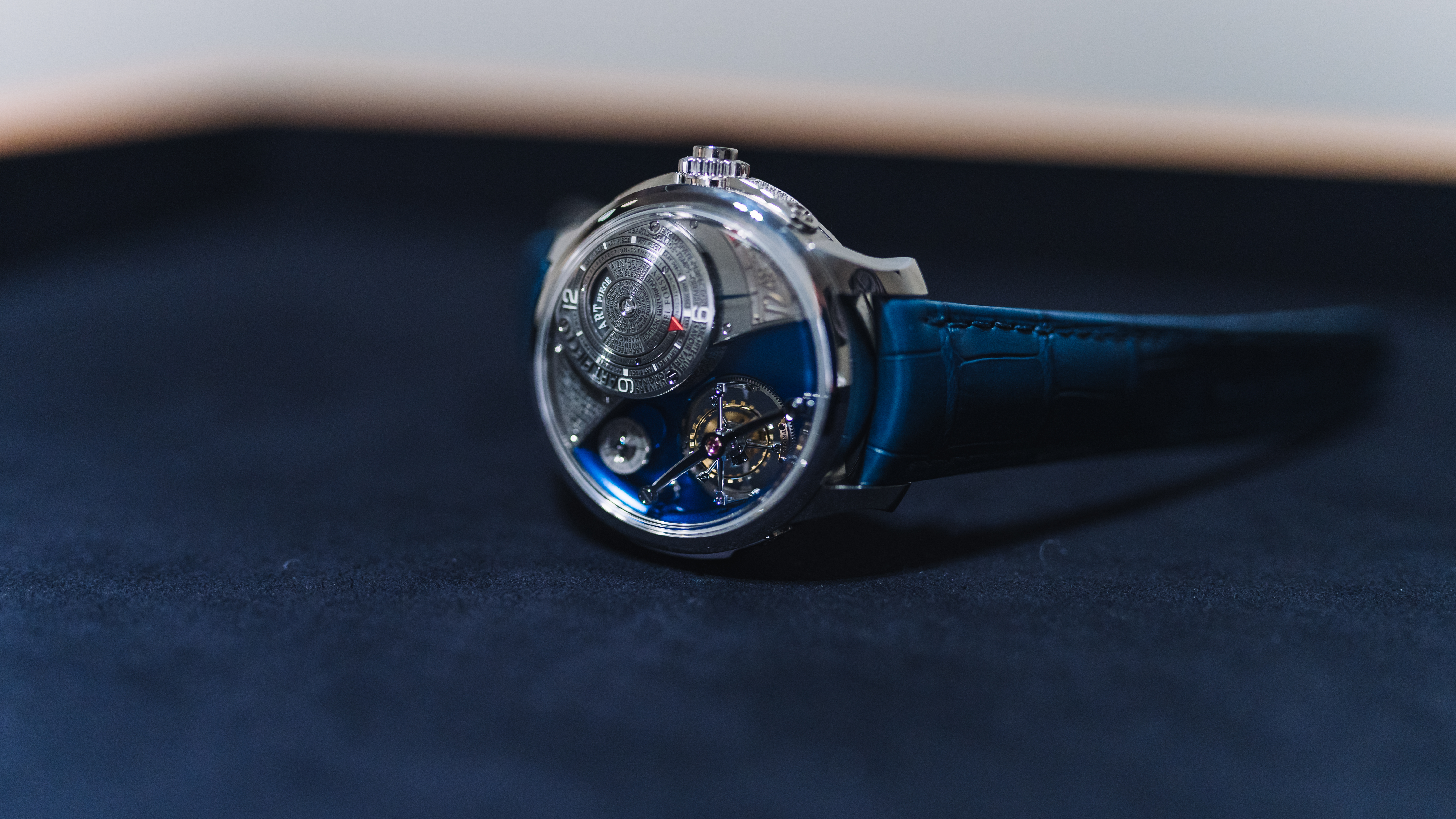 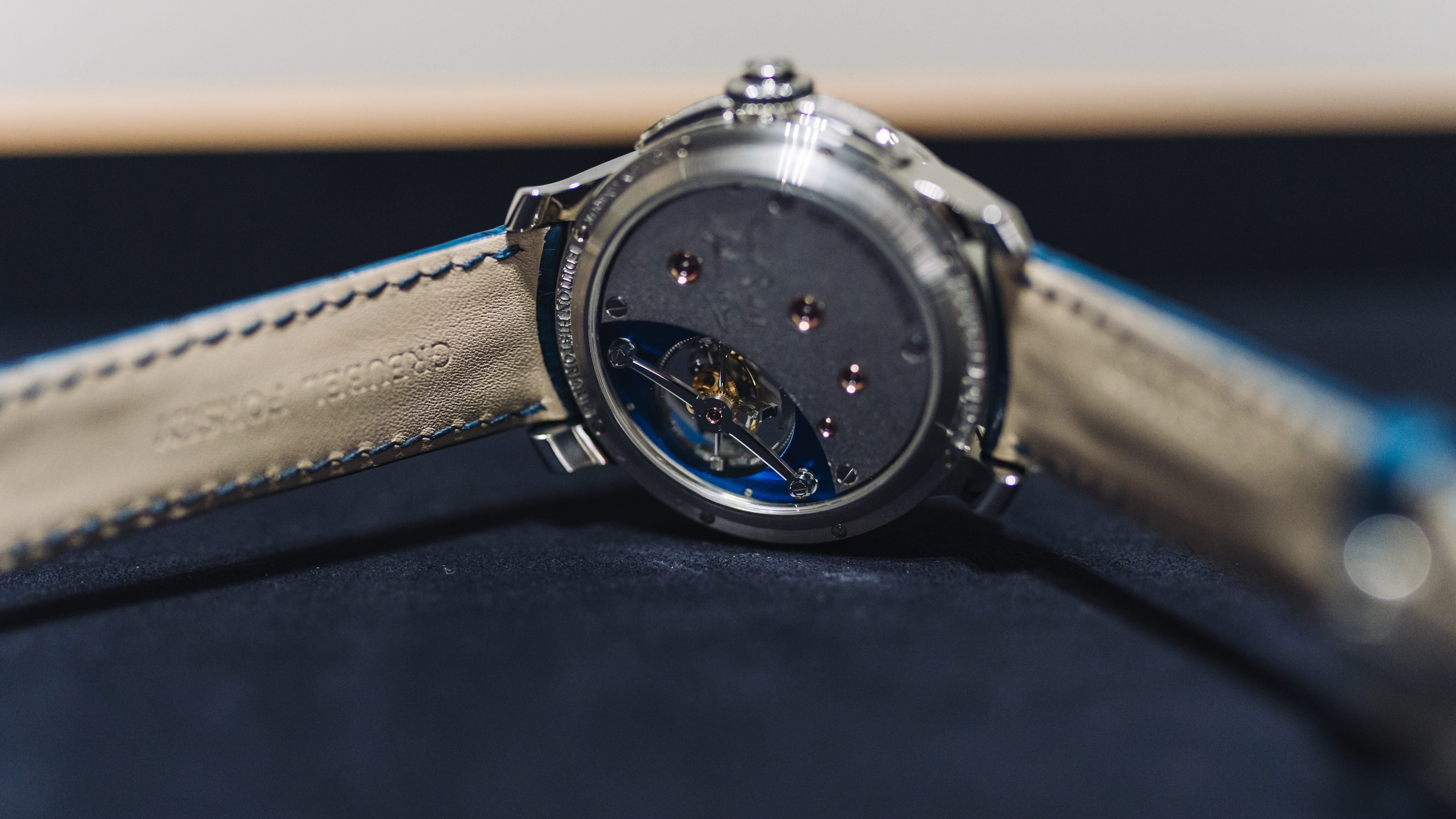 But, if you looked closely where the time is indicated, and you’ll notice the lack of a minutes hand. The hours are obvious enough, and a big red triangle aids legibility there. The way the minutes are delivered is smart and completely unnecessary. The crown has a pusher inside, when you depress it, the words saying ‘Art Piece’ on the time dial disappear to reveal a disk showing the minutes underneath. Luckily, you can see something on the caseback, the signatures of the brand’s namesakes, Robert Greubel and Stephen Forsey, as well as the back of that tourbillon. But, the piece is limited to 33 editions, the first 11 in platinum, and the price is set at 555,000 Swiss Francs, so whether you do ever get to see that caseback somewhat depends on your budget. Visit Greubel Forsey here.