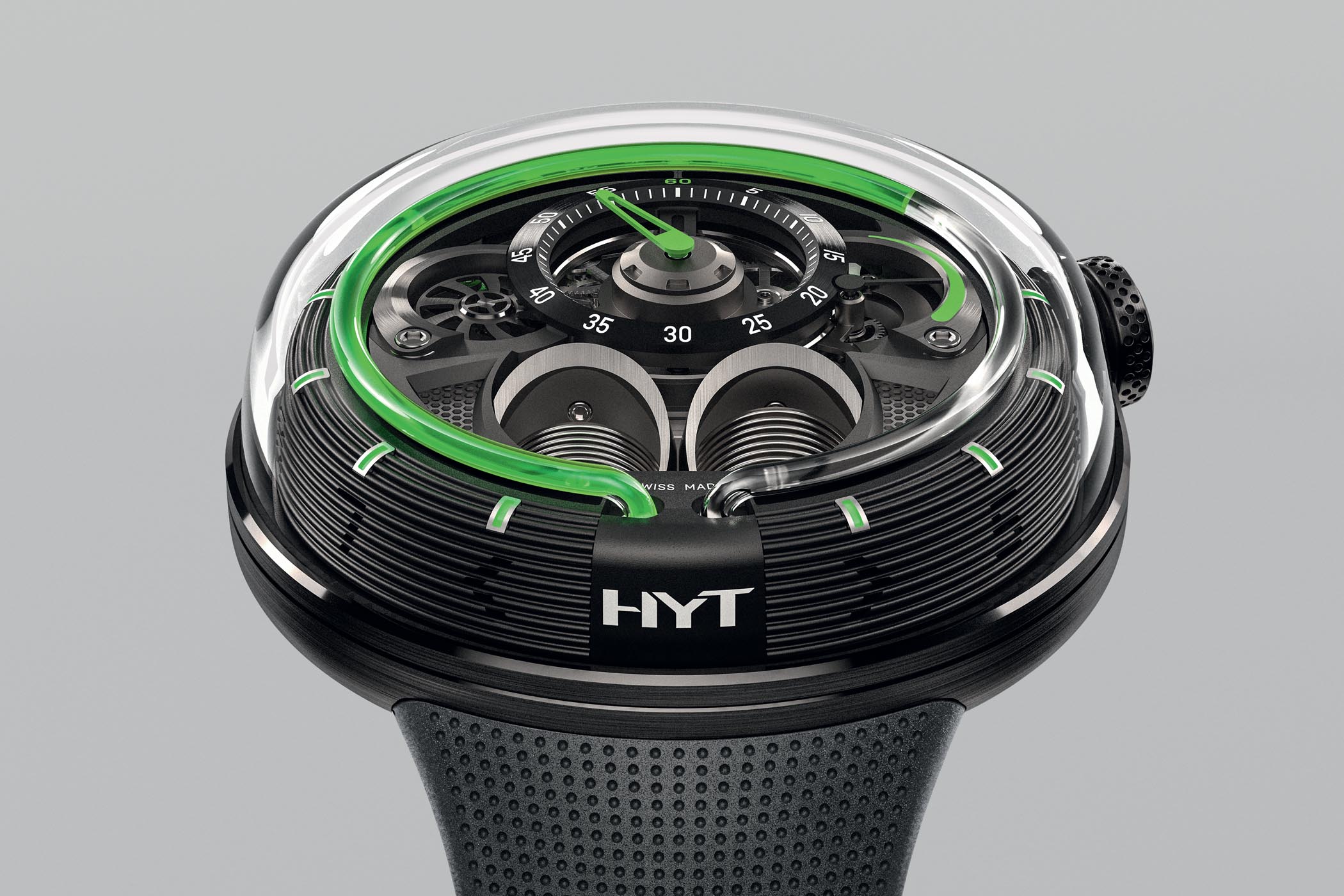 Collisions. The very destructive nature of collisions surprisingly brought out life into the universe – the Big Bang. The beauty of collision can also be seen in HYT’s new timepiece, the H1.0. With the name being the only disappointment, the H1.0 beautiful juxtaposes Mechanical Horology alongside the latest fluid technology. The result is a timepiece that showcases the injection of physical energy into a patented fluidic module. As the intricate movement and multi-layer bellows join forces, time literally gains momentum. 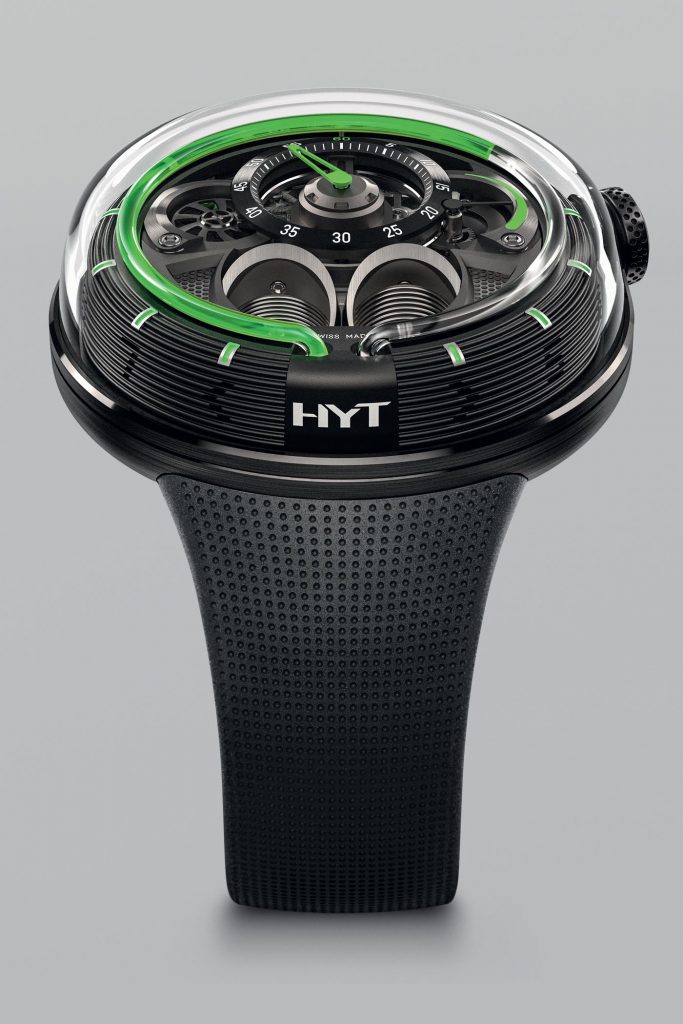 In 2012, HYT debuted its first timepiece collection, the H1, a collection that is currently being phased out. More recently the brand came out with the H0, which was meant to be a new direction using the same “fluidic module” concept which the entire HYT brand is based on. While at a glance it looks like the H0 with its curvy lug-less case and sapphire crystal cap, the H1.0 is a totally new watch that shares nothing with the H0. In mostly sapphire crystal and steel, the H1.0 collection features more visually striking lines and with its lack of lugs, a more comfortable case. 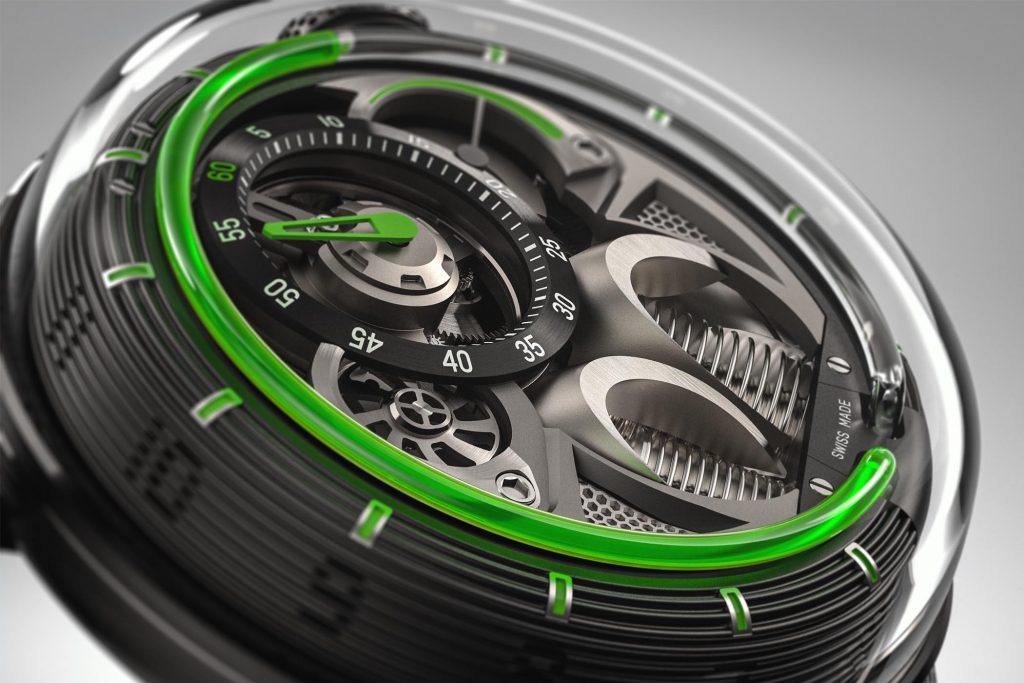 The H1.0 is a visual treat offering three-dimensional transparency. Viewed from any angle it takes an architectural approach to visualize the passage of time, placing the present in the context of the past and future, using liquids. All elements of the specially developed skeletonized mechanical movement collaborate closely to form the big picture of pure functionality. From the clearly visible power reserve display to the constructed wheel that indicates the flow of the seconds, time is in perpetual motion. Positive energy emerges from a series of visible tensions, such as the shaping of the steeply curved case and the clipped lines of the bellows’ extractors. Even the side-view of the watch tells the story of time’s passage via cut-out digits embedded in the deep grooves of the case‘s exterior. 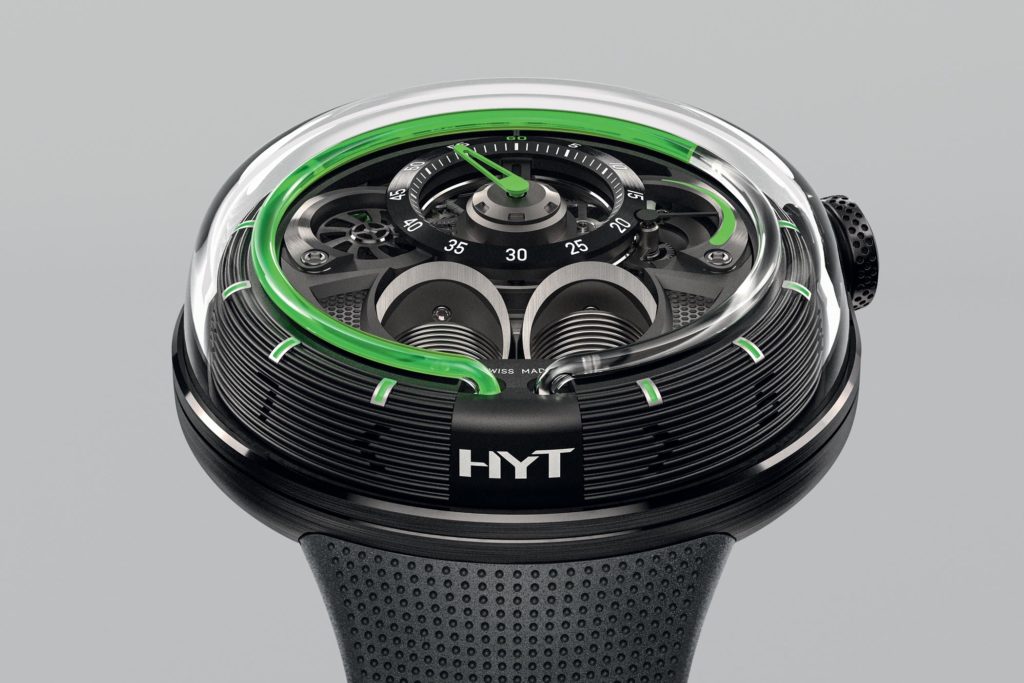 The movement powering the HYT H1.0 is the same proprietary hand-wound calibre used in all the models with upright bellows that offers a power reserve of 65 hours. An isostatic connection links this mechanical movement to the multi-layer bellows containing the two immiscible fluids that are pushed in both directions through the borosilicate glass capillary tube with its special interior nano coating. Though the watch has water inside, it isn’t the best at handling the water pressure on the outside as its equipped with only a 50 meters water resistance.

There are three versions of the HYT H1.0 silver, black or anthracite case finishes complement bright blue, green or red immiscible liquids that flow perfectly in time with the elapsed hours. All are secured to the wrist with a subtly patterned black rubber strap and titanium buckle. making an impact feels good. The watch will retail for CHF 49,000. Visit HYT here.