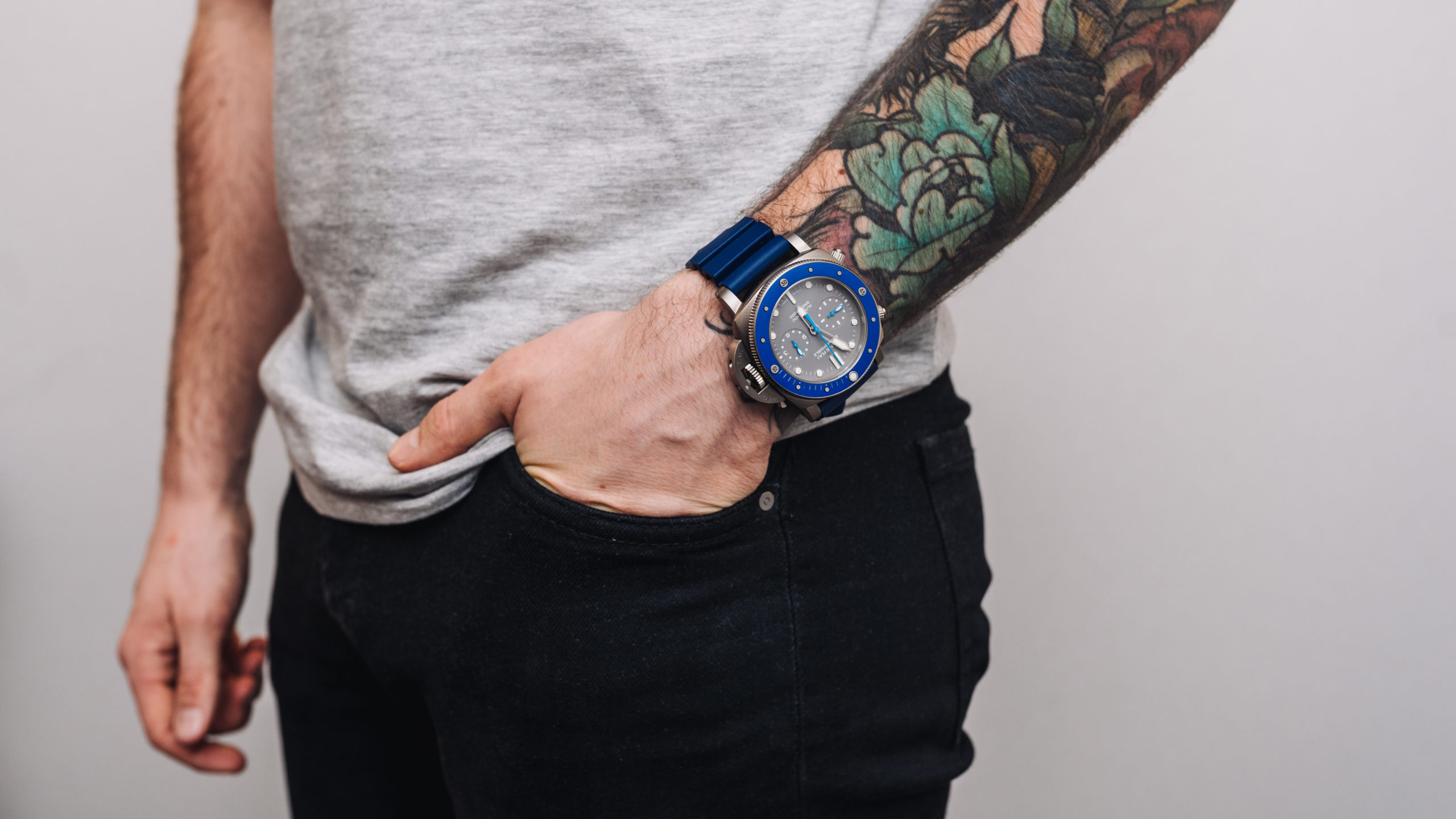 There were loads of different releases at last week’s SIHH to keep every journalist busy for the next month, but, while we are working hard, we appreciate that you don’t want to be. So, to give you the roundup here’s a list of everything Panerai (who unveiled no less than 12 watches this year) released at SIHH. 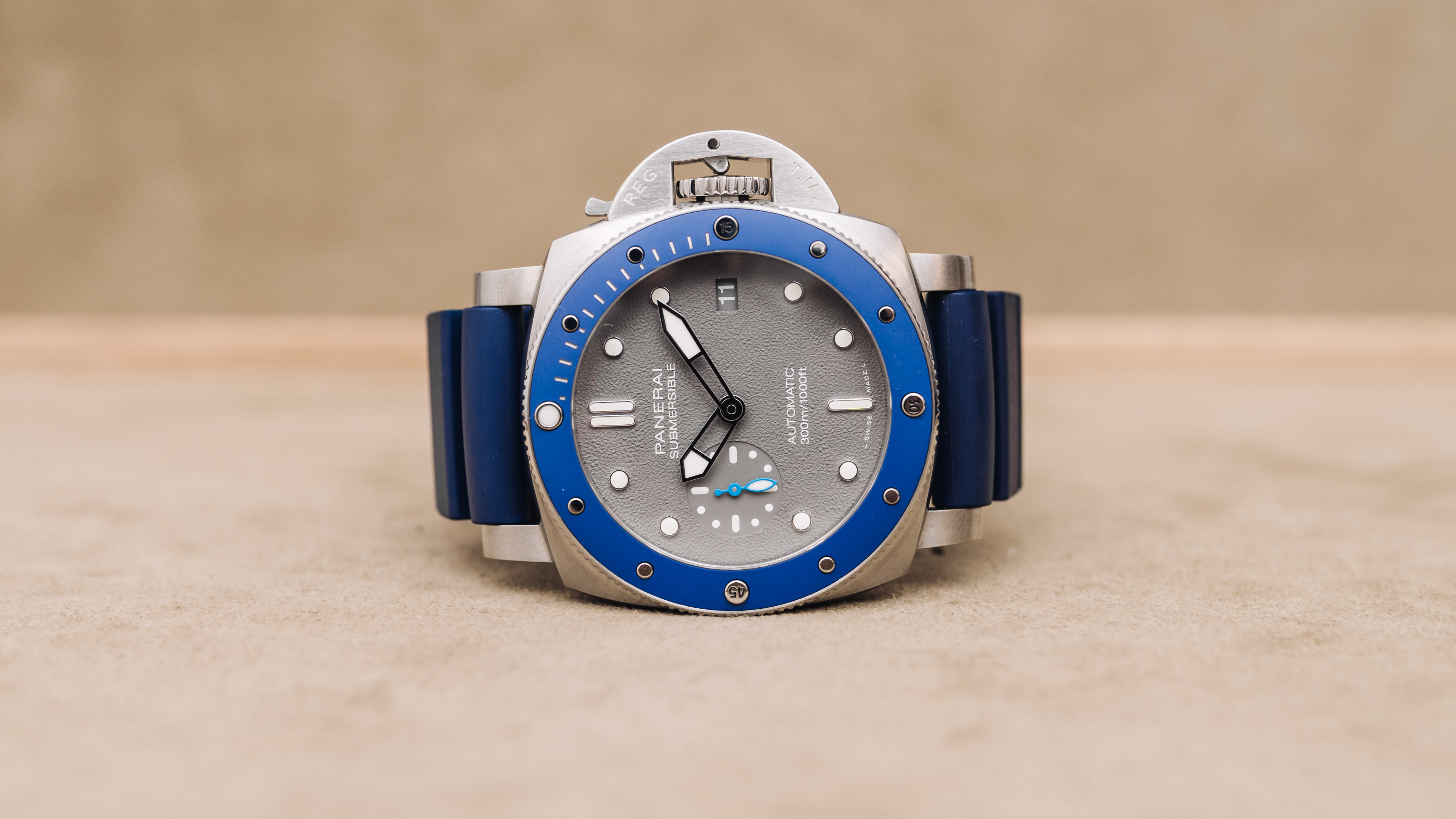 The smallest of Panerai’s modern-day diving range of watches came in a new blue and grey colour scheme like we saw from Omega last year with their Diver 300 watch. It’s water resistant to 300m with a stainless steel case and the in-house calibre OP XXXIV is good for 72 hours. 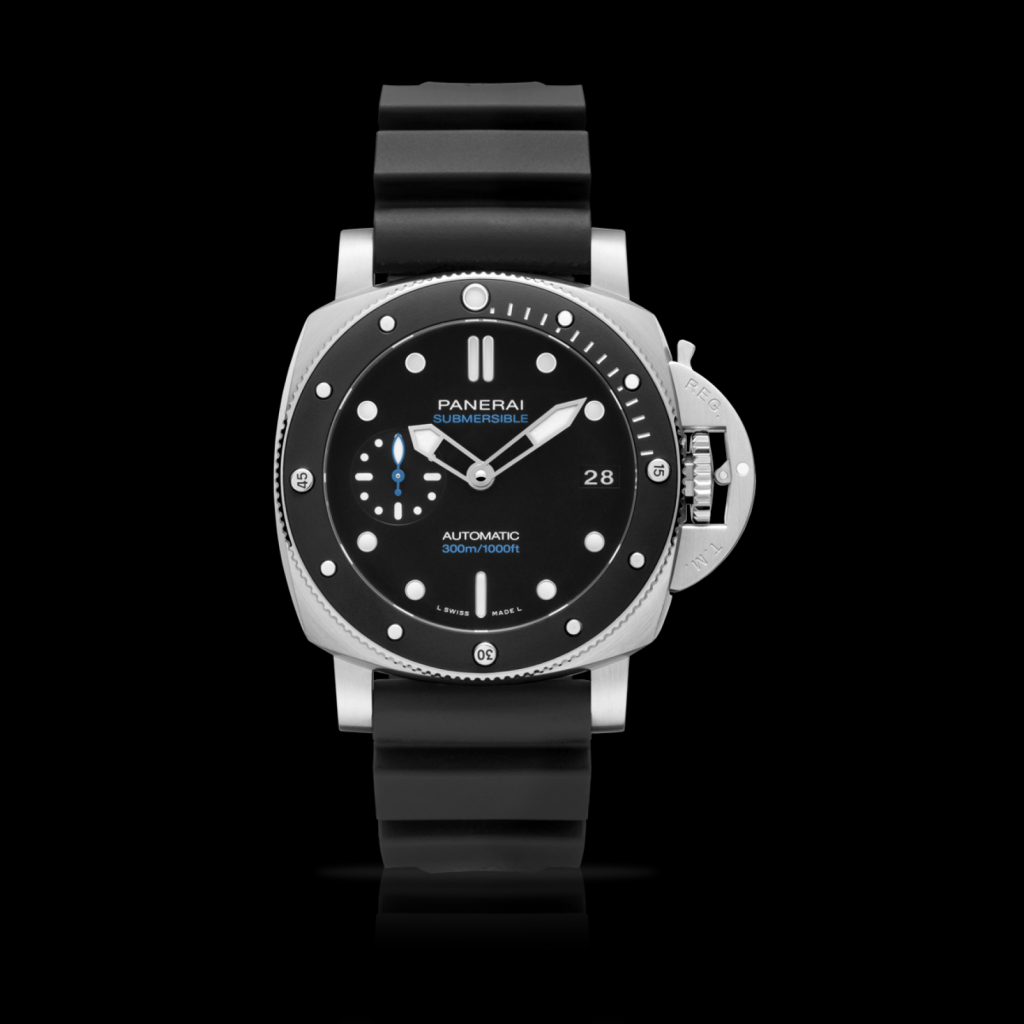 If the blue and grey with textured dial look is too much for you, then Panerai also revealed its 42mm Submersible model in the more standard black on black with a black ceramic bezel in a 316L steel case. This watch features the same movement as the 00959 which includes Incabloc shock protection. 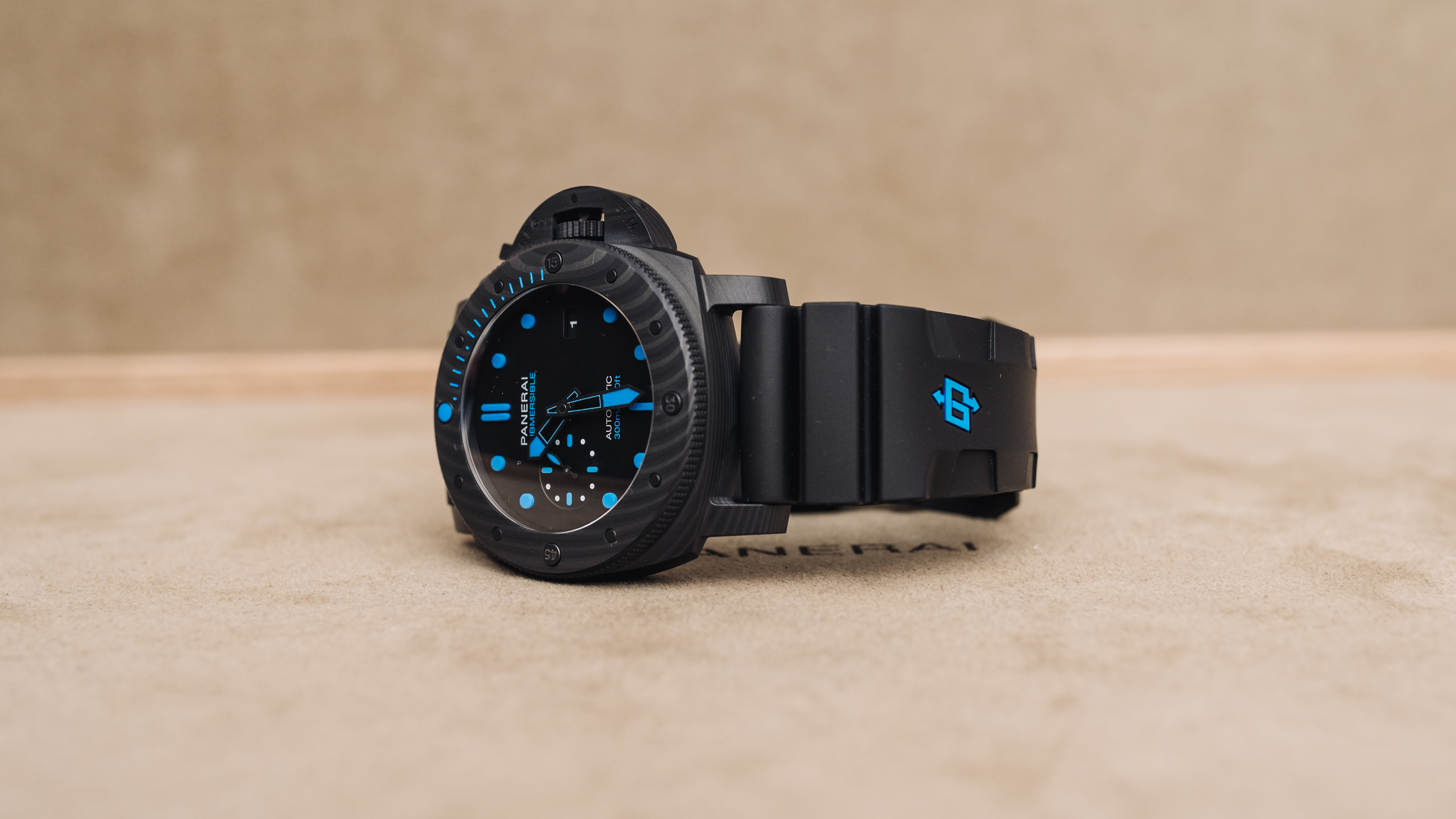 One of Panerai’s best feats is the research that goes into its case materials. Carbotech is one of their ideas which presses thin sheets of carbon fibre together to bond them into a solid block. Now, that block comes in 42mm form. This watch has the same movement as the previous two. 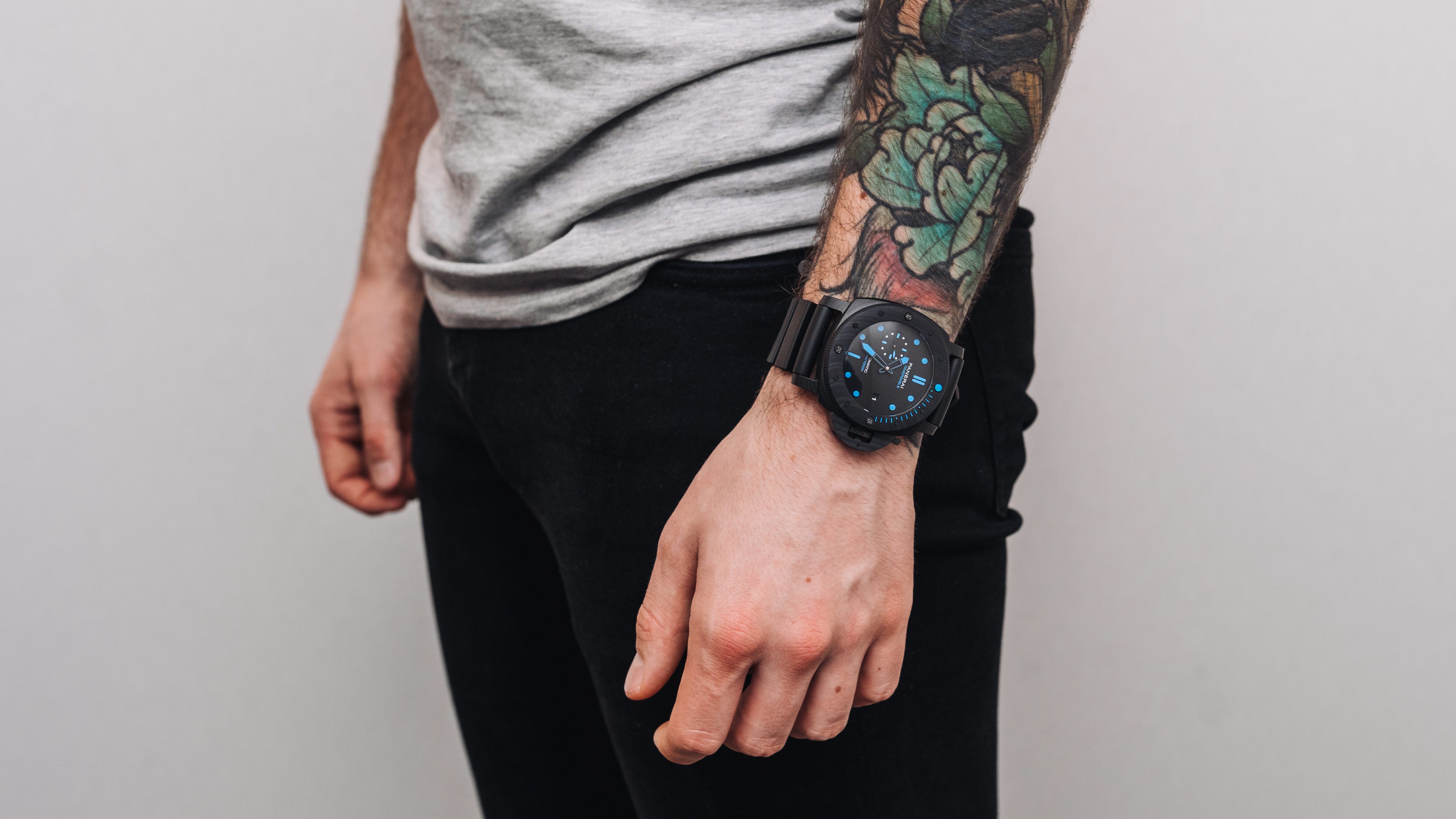 For 2019 Panerai also updated its original Carbotech diver, the 47mm version gets snazzy lume on the dial and sword hands bringing into line with its 42mm counterpart. Inside is the in-house made calibre P.9010, this watch also offers 72 hours of power reserve, Incabloc shock protection and a maximum depth of 300m plus Panerai’s 25% safety margin. 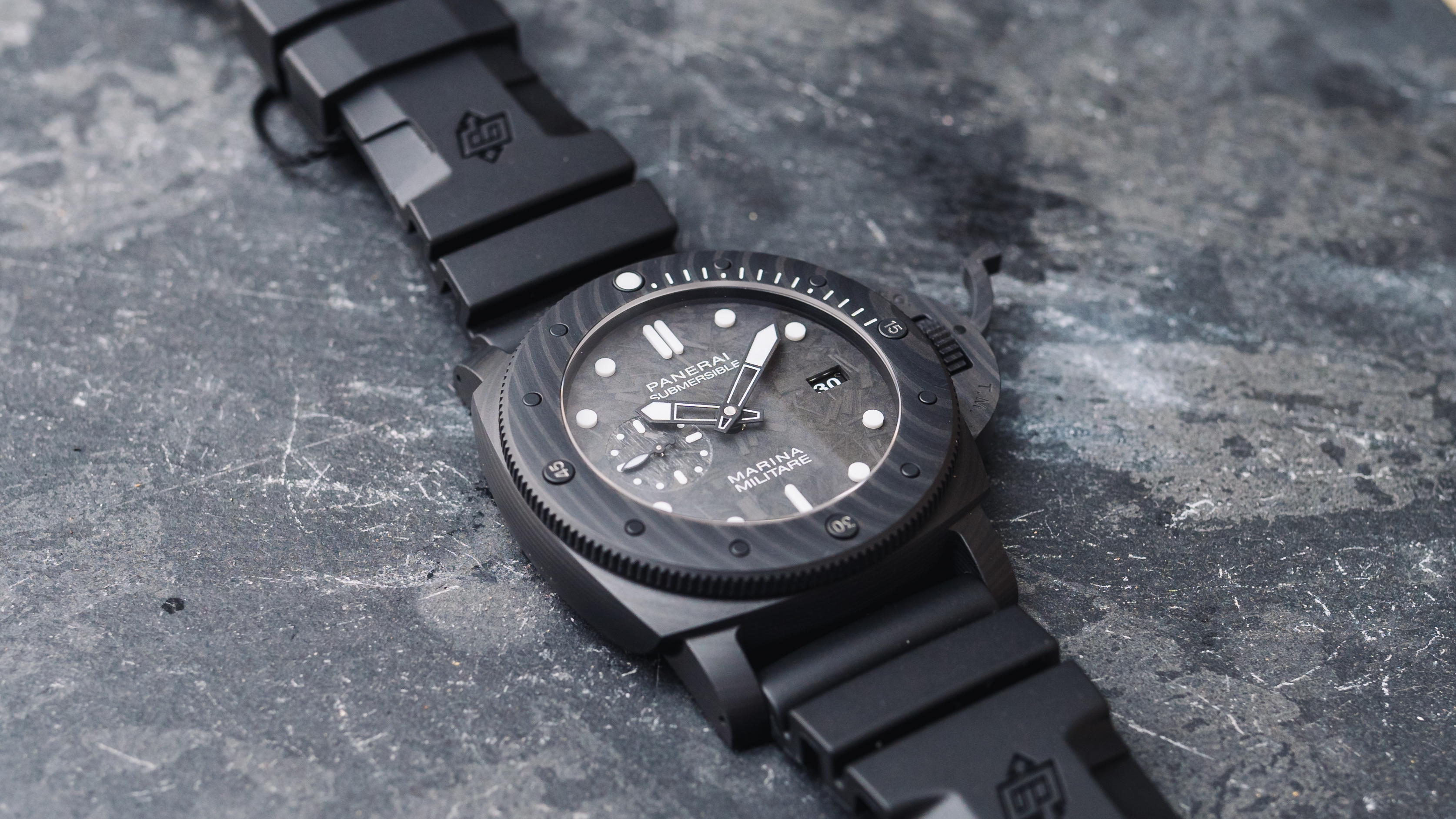 Celebrating Panerai’s history as the supplier of timing devices and other instruments to the Italian Navy’s commandos, the Marina Militaire features a camouflage carbon dial to match the camo of the Carbotech case, with the P.9010 calibre on board and an engraved caseback. Thankfully there’s no fake patina lume here, just stark white SuperLumiNova. 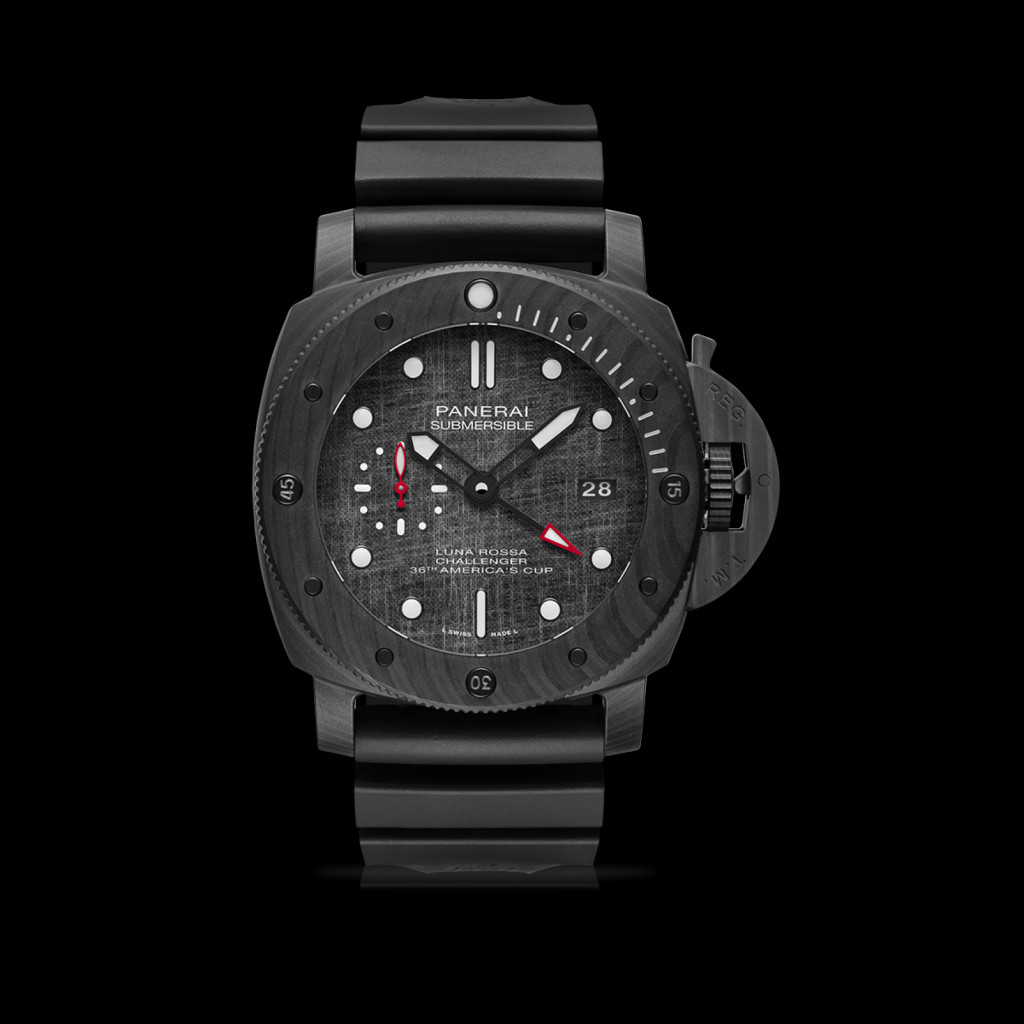 Celebrating a new sponsorship deal with Italian sailing team, Luna Rossa, Panerai creates the 01039 Submersible which features a sailcloth dial, 47mm Carbotech case and red details. It even adds a GMT hand to the standard bombproof P.9010 automatic calibre, featuring an engraved caseback, we will see more Luna Rossa watches in the future. 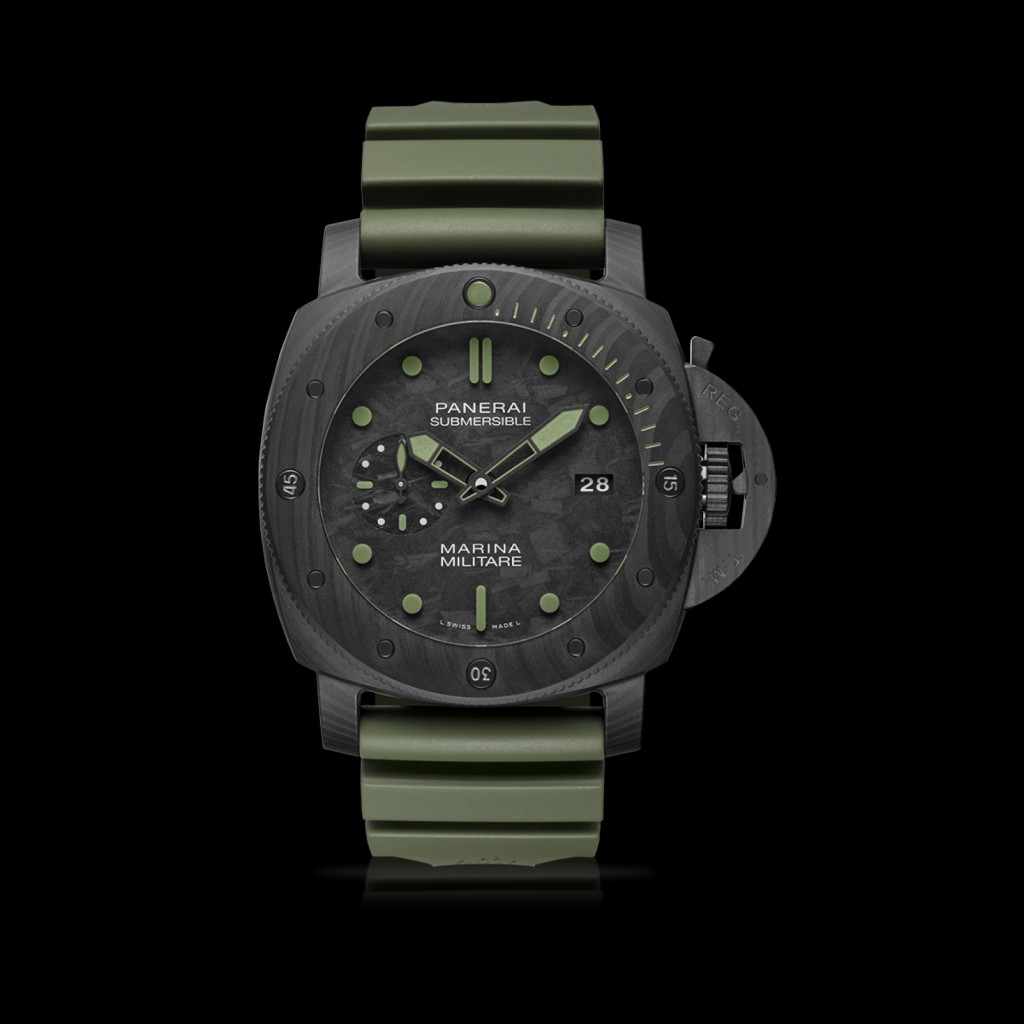 Perhaps the most talked about model from Panerai’s 2019 collection, this 33 piece limited edition Marina Militaire features a camo green rubber strap with green lume and a green camouflage dial. The reason it’s limited edition? Buyers of the timepiece new will get to take a training session with the Comsubin, the Italian Navy’s Diving and Commando group, I wish I could get a hold of one of these! 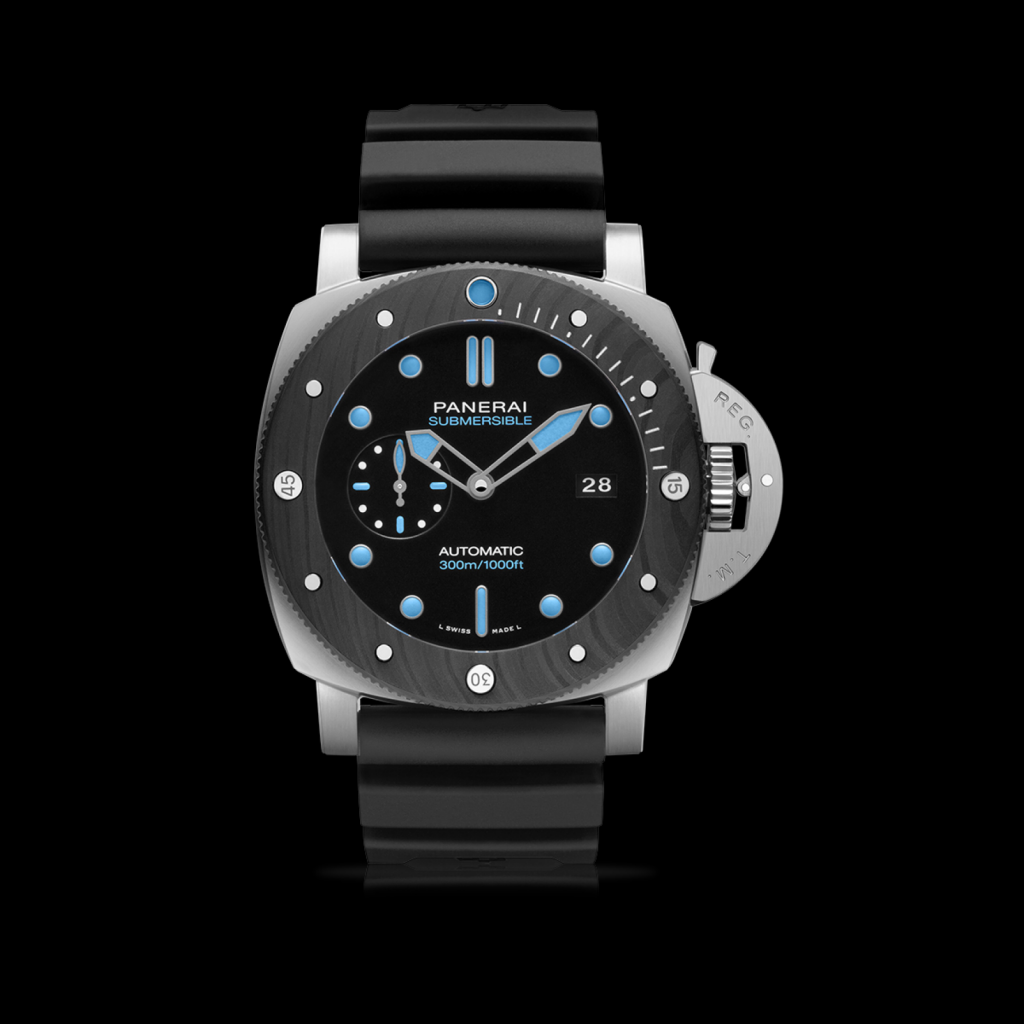 Panerai’s unique material used is BMG, which stands for Bulk Metallic Glass. An alloy of zirconium, copper, aluminium, titanium and nickel is heated and pressurised before being injected then rapidly cooled, creating an uneven atomic structure which adds greater strength, corrosion resistance, anti-magnetism and resistance to shocks to this glass-like compound. Adding in the new sexy Carbotech bezel takes this watch to 11. 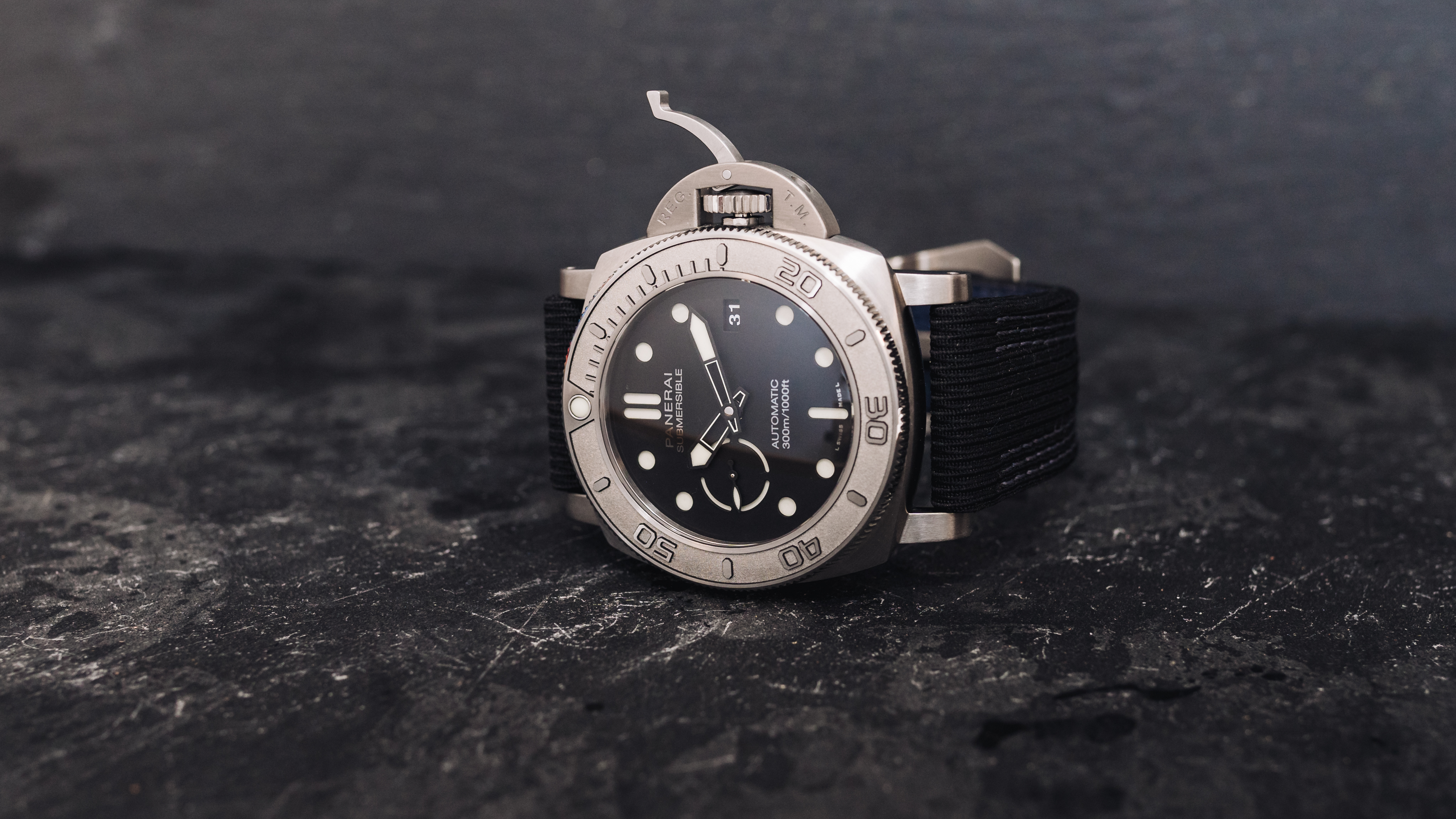 This 47mm edition of the Submersible features an entirely different look to the other models, including a diving bezel with raised numerals, a more futuristic looking dial and the Panerai name printed on the glass. It’s celebrating Mike Horn, one of the greatest explorers and a Panerai ambassador of over 15 years. It’s made of EcoTitanium, which is recycled titanium that doesn’t damage the environment through its mining. The strap is made of recycled material too. 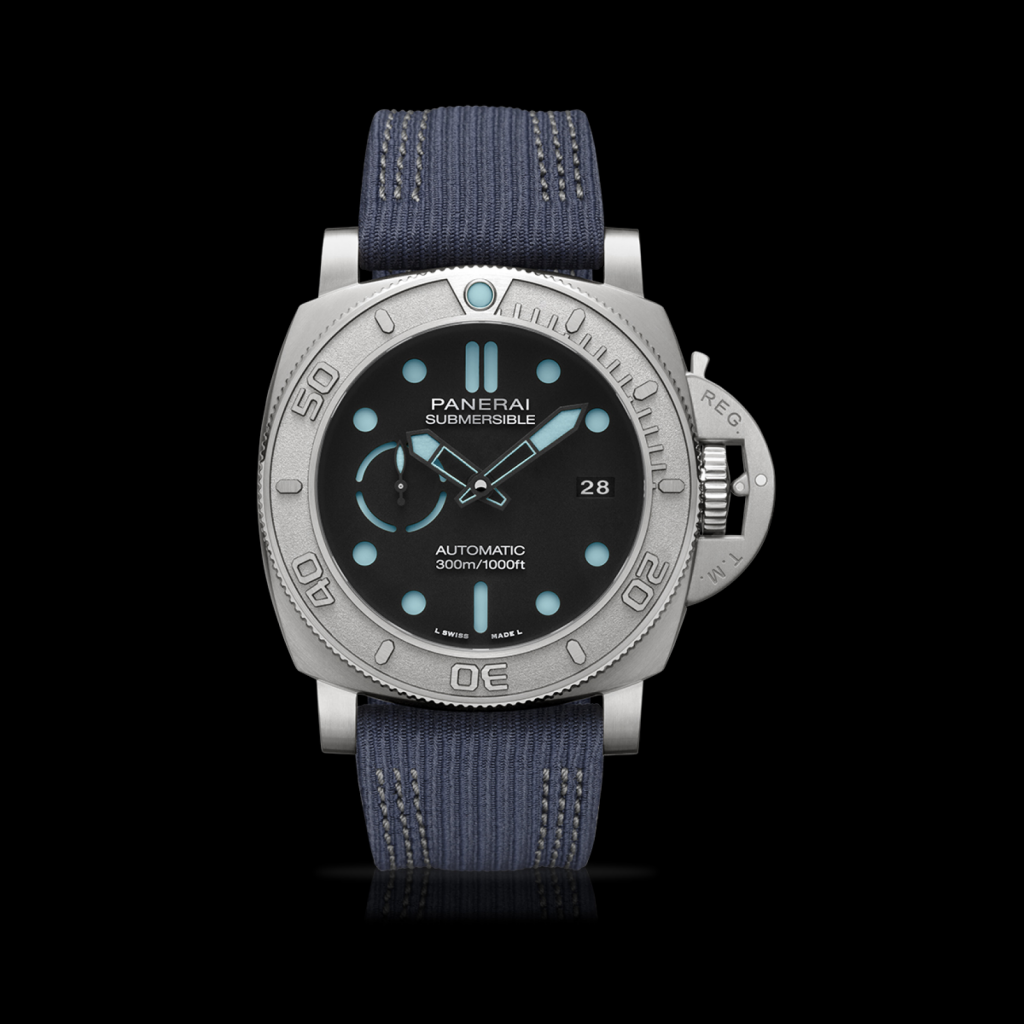 Like the previous model but with more chilling blue colours, this special edition PAM00985 offers the automatic in-house P.9010 calibre as well, with the EcoTitanium case too. The blue version is, however, a limited edition watch as well. Limited to 19 examples worldwide, the watch grants the buyer access to a multi-day training course in the Arctic with Mike himself, who will not only show how to survive in the most inhospitable part of this planet, but also the damage humans are doing to it. 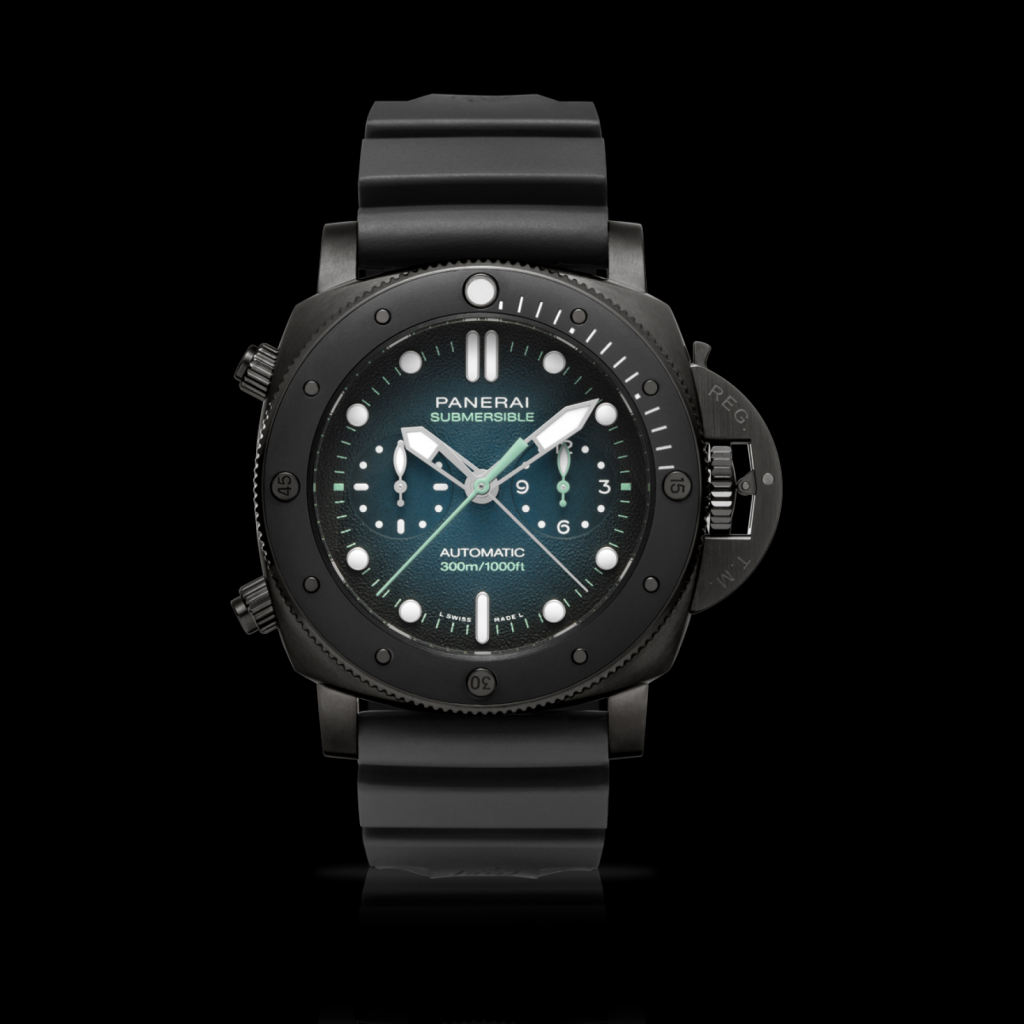 The big burly 47mm chronograph gets two new special editions, one which we have unveiled previously, and this new one which is also dedicated to professional freediver and friend of the brand. This watch which watch described as ‘sexy and light’ by Panerai themselves features a DLC coated titanium case housing the impressive P.9100 flyback chronograph movement. Better yet, the lucky 15 buyers get to experience diving with Guillaume in French Polynesia and learning why he is so passionate about the sea. 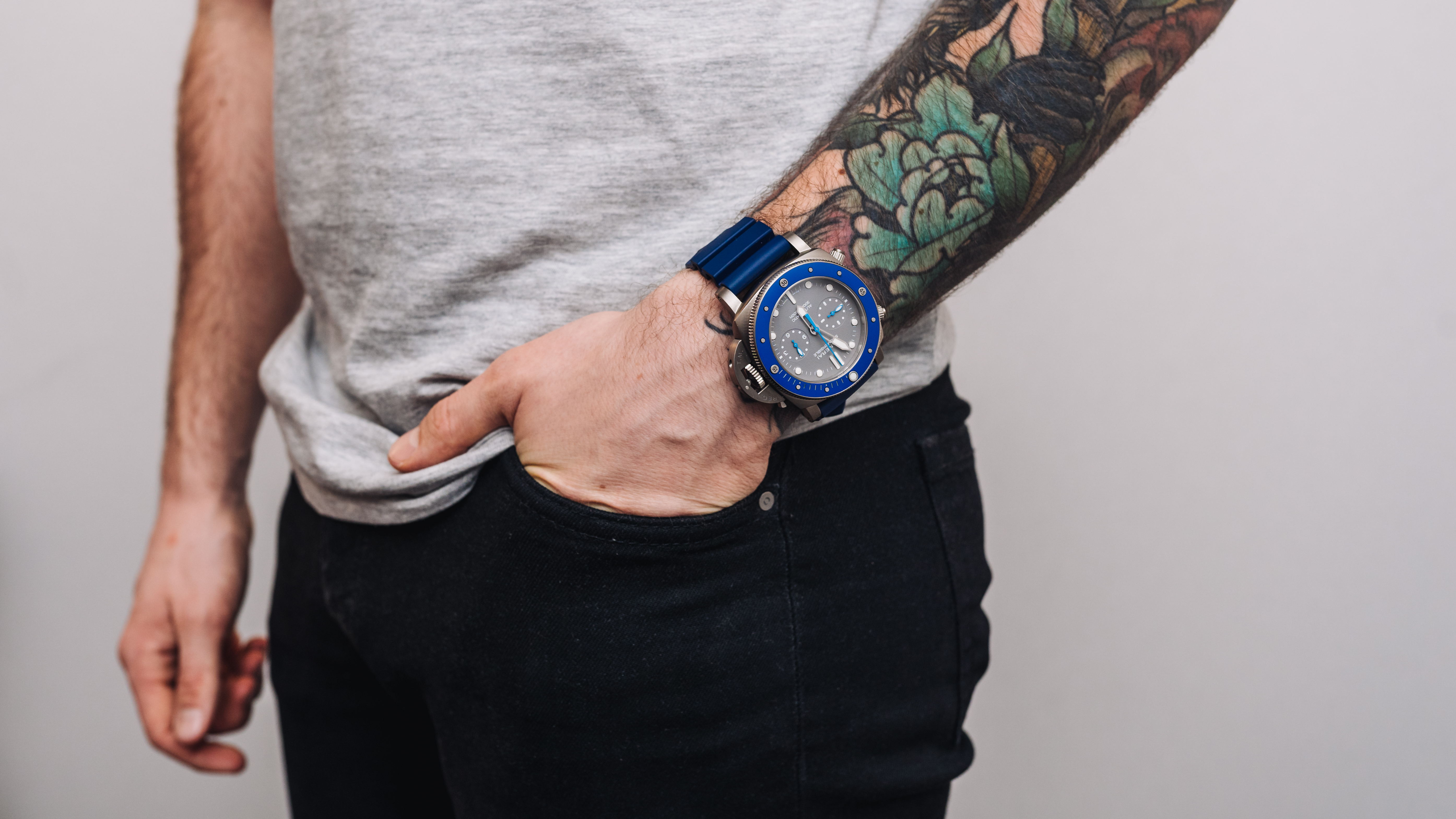 The non-limited version of the Guillaume Néry Submersible Chrono watches features a blue and grey theme, identical to that of the first watch we looked at but a lot bigger. The case is 47mm and made of titanium with a blue ceramic bezel. Meanwhile, the dial with a bi-compax subdial layout has a ‘shark grey’ colour to it and what could be passed off as a sharkskin pattern. Inside is the same P.9100 in-house made self-winding chronograph movement offering 72 hours of power reserve.

No less than 12 variants of the Submersible were shown this year, so it looks like Panerai has significantly invested in its big diving watch range. We love these watches, but what do you think? Is Carbotech the future? Visit Panerai here.