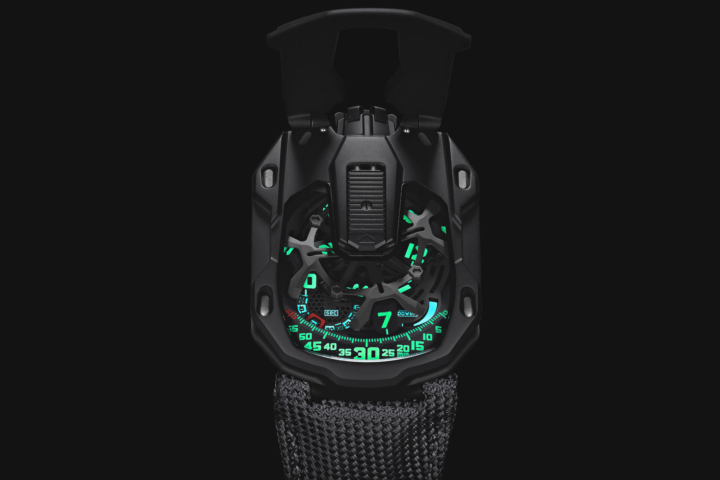 URWERK may have recurring themes but their new releases always pack a punch. As for the brand’s latest creation, the URWERK UR–105 CT Kryptonite, the concept of luminosity is taken to the next level. The new watch is a variation of the Streamliner but we already know about the recurring themes so why care.

Even if the URWERK UR–105 CT isn’t a novelty it adds a much needed cool feature, a Kryptonite, that pretty much glows very strongly in the dark. It only becomes a problem if you are from Supermans homeplanet, Krypton. Kidding aside, the design is very impressive.

What you get here is really the glowing feature since we have the same stuff from the existing models. The case and the movement are entirely the same. The shield thingy that appeared in the first two UR–105 models with the crown positioned at 12 o’clock is also present and serves a greater purpose here. The relatively wearable dimensions of the new watch would also allow you to make it as your daily driver, should you dare show it to your boss. Another note, the CT version’s Targa look featuring a hinged protective cover on top of the watch that allows a partial view of the time display and a full view of the mechanics when opened brings back memories from the model 103, I like it. 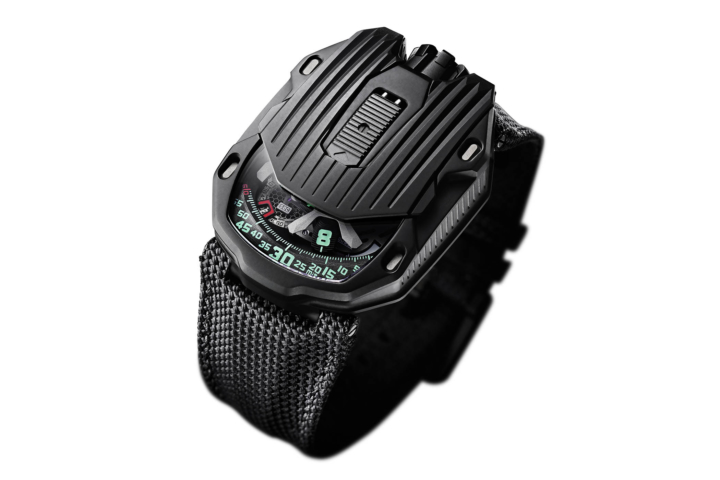 The case of the UR–105 CT Kryptonite appears clean and minimalistic, as defined in the category of an Urwerk watch. The vertical grooves on the cover takes inspiration from skyscrapers that adds a punchier look. The brand also boldly claims that the design truly evokes the mood of “Gotham City,” no doubt about that now. The titanium case is also coated with deep black AlTiN and to complete the stealthy look, a dark fabric strap is used featuring a pin buckle. When closed, the watch appears pitch black except the hour numerals and minutes track that are coated in white, imagine had you been required to lift the lid once in a while.

The movement features wandering hours running over a 60-minute scale. There is the same signature automatic winding with two pneumatic turbines on the back governing the self-winding rate that is set with a lever in FULL position, in STOP position or in RED, reduced position. As for the later developments, we get the fully opened carrousel which is now lighter and more aerial base-plate. There is also the addition of a digital second on the left of the time display and a power reserve indicator opposite side.

Come darkness, the URWERK UR–105 CT Kryptonite shows its true might. The hour markers and minute track has a very strong green glow while the seconds indicator and the power reserve have blue glow. The lighting effect is very cool and more playful when the hinged cover is open.

The new URWERK UR–105 CT Kryptonite retails for the same price as the previous models in the collection, at CHF 65,000 exclusive of taxes. For more info, visit URWERK online.