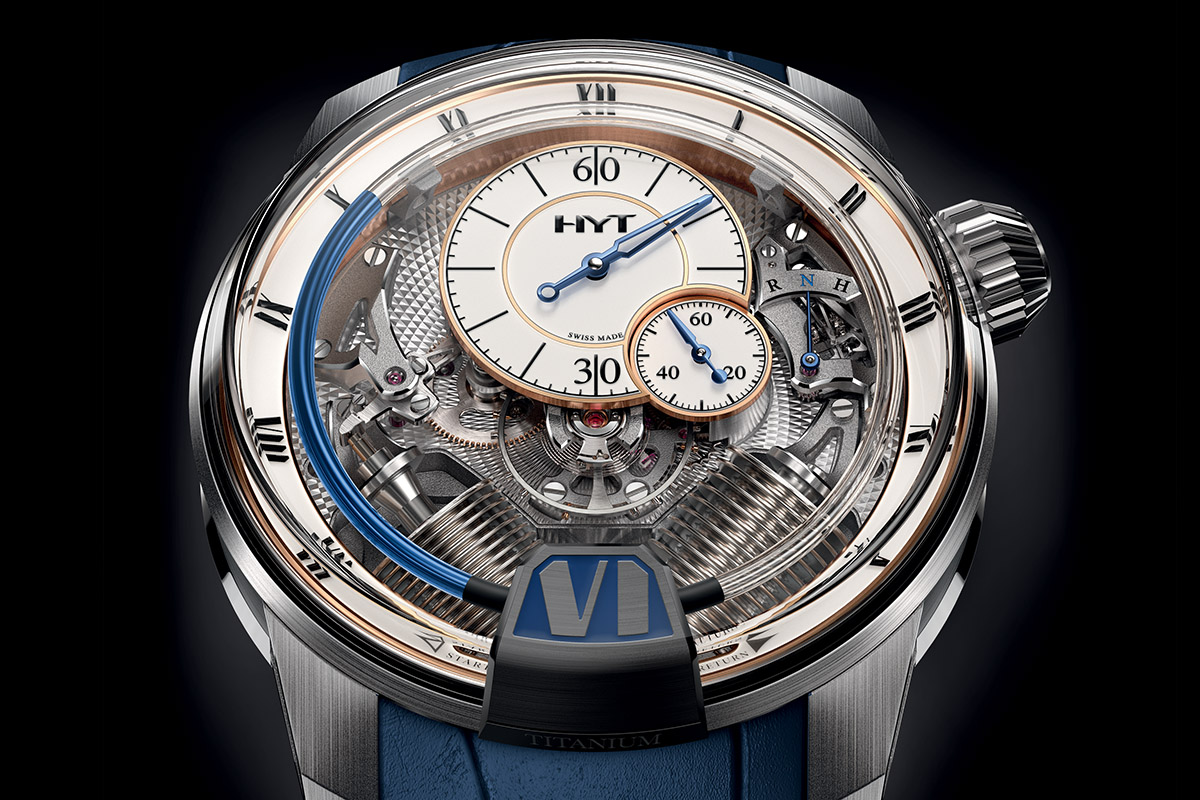 HYT offers something truly unique in the luxury watch space. Yes, that’s a sentence that has started many an article like this one. Does any independent watchmaker strive to offer something run of the mill that can had for a pittance at any mall or department store? Creating something unique isn’t even enough – for a watch to gain traction in a competitive market, it has be almost off the wall. Instragrammable, for sure. Being colorful and, well, big, helps a lot too. And being powered by a novel hydro mechanical movement definitely won’t hurt.

HYT’s watches are, for lack of a better term, bonkers. They use a combination of a traditional mechanical gear train with precision engineered fluids, pushed through tiny tubes, to tell the time. The distinctive bellows visible through most of HYT’s open worked dials are the stars of the show, along with the often brightly colored fluid that makes its way around the dial (in multiple directions) to indicate time’s passage. Let’s take a closer look at five absolutely superlative avant-garde watches that bridge the gap between science, art, and even some old school horology. 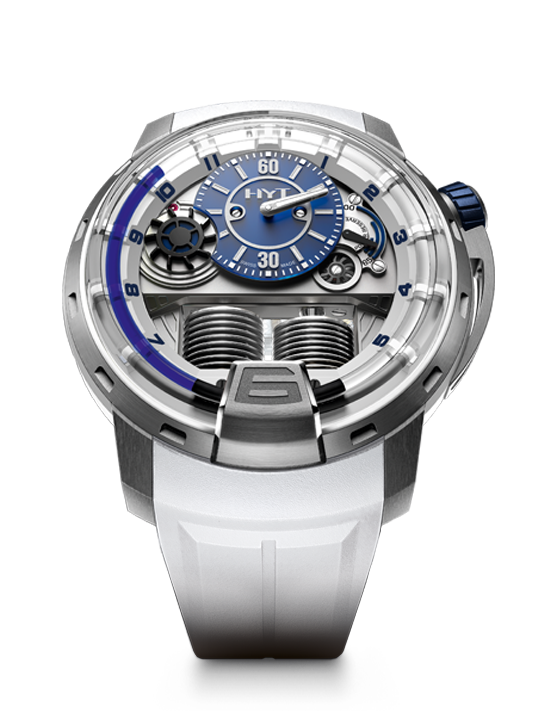 The Iceberg 2 is part of the HYT H1 collection, and represents, for HYT, a fairly straightforward introduction to telling the time using their unique movement. It’s also a dramatic and beautiful color combination that’s sporty but also refined, and will surely make a statement in any situation.

The dial is circled by an hours track, and along that track a blue fluid is literally pushed by the mechanical bellows through a tube, and where the fluid ends, you have your hour indication. Minutes are recorded on the much more traditional dial at 12 o’clock.

Think of the day starting at 6 AM. This is where the fluid begins its journey. It circles the perimeter of the case where you can easily read the time based where the fluid lines up with the hours track. Eventually, the fluid closes the loop (at 6:00 PM, everyday) and in seconds it retracts all the way back to where it started. Now it’s telling you the time in the evening, and will continue to read the correct time until it retracts again at 6:00 AM.

This is one of those things that’s more difficult to explain in words. Once you see it in action (and HYT’s website has plenty of great animations that do just that) reading the time becomes fairly intuitive. 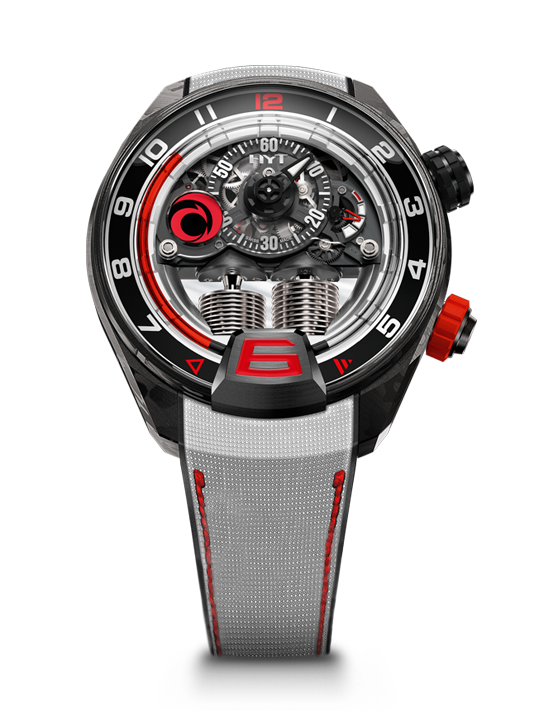 From the H4 collection, the Alinghi appeals to the adolescent watch lover in all of us. The same hydro-mechanical principle applies here, but with a few little twists.

First of all, it’s red and black. Is there a less conservative color option in a watch? This is not a mature choice. It says to anyone who happens to notice it that the wearer just doesn’t care about the social norms and fitting in. If it happens to be noticed by someone who recognizes the watch’s exclusivity and complexity, the effect is magnified.

Also, this watch has a little flashlight built in. If that doesn’t put a smile on your face, I’m not sure why you’re involved in this hobby to begin with. The second crown at 4:00 (well, 4:00 on a traditional watch, that is) activates a small LED light that illuminates the dial, and the openworked movement, from the bottom. Watch related light shows were cool when I was a kid and couldn’t stop pressing the Indiglo button on my Timex under the covers, and they’re cool now this HYT. 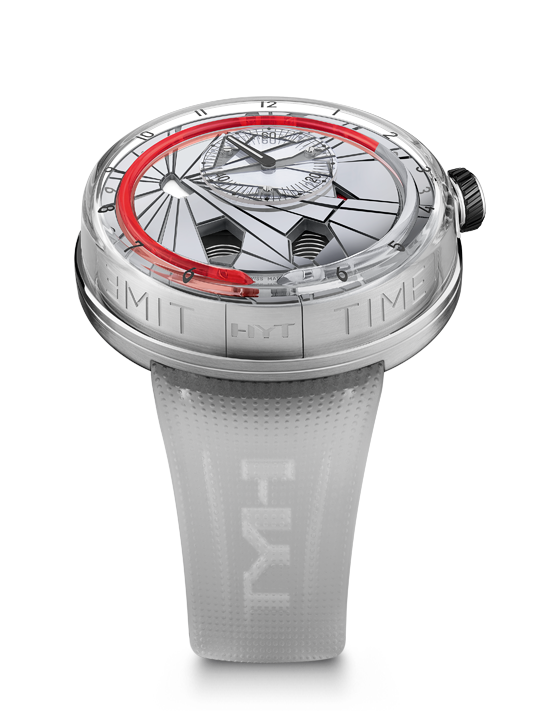 The H0 collection is perhaps the most whimsical lineup in the HYT stable. These pieces are all about watches as storytelling devices, often using precious metals to highlight the contrast between value in the world of antiquity and the extremely diligent scientific method behind HYT’s technology.

The Time is Precious is dominated by it’s absolutely unique and beautiful dial. Comprised of 63 highly polished facets, each tilted just slightly, it resembles a broken mirror and puts on a crazy natural light show as it catches reflections everywhere. It’s meant to sybmolize the fluidity of the present in the face of a shared past. Or something. Honestly, sometimes I think the marketing comes much later than the watch itself. Whatever HYT thinks the watch means, let’s take a second and just appreciate how visually arresting it is. 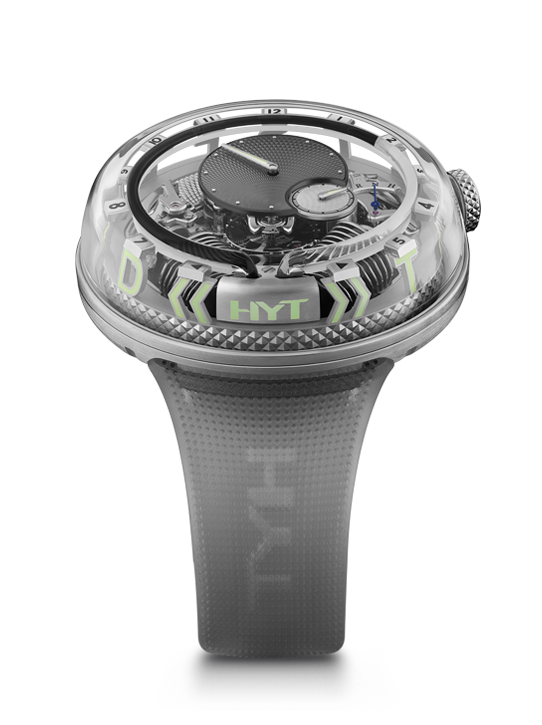 The H2O collection is sporty and (relatively) simple – things I tend to be drawn to in watches. Taking a deeper look, however, there’s a lot of incredible detail that makes this piece, dubbed “Time is Fluid,” pretty special. The guilloche work on the dial and base plate (as usual, visible through the dial side thanks to skeletonization) is quite stunning, and a genuinely interesting counterpoint to the ultra modern hydro mechanical movement. Centuries of horological tradition have essentially been combined into unusual and striking timepiece.

This one, more than many HYTs, can really be worn casually. The rubber strap and soft lines of the case combined with the accents of light green along the flange give the watch an unusually organic and natural feel. 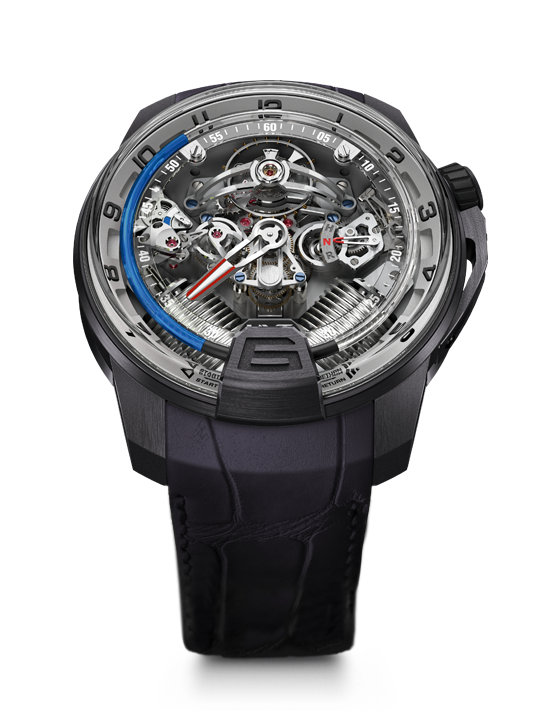 The H2 collection is perhaps the most maximalist interpretation of the HYT aesthetic. Watches in this collection are pure statement makers and push HYT’s technology to its absolute limit. With a movemenent engineered in partnership with Audemars Piguet Renaud Papi, the H2 Full Gun includes some extra horological flourishes that set it apart from other HYT watches.

Because of the use of liquids in the time telling mechanism, temperature control is important in HYT’s watches. At 9:00 on the Full Gun’s dial, HYT has included a thermal indicator that tells you if the watch is operating in its optimal temperature segment. The indicator at 3:00 is a mechanical expression of the crown’s status (telling you at a glance if it’s unscrewed and whether or not it’s in the winding or time setting position). Finally, the large central minute hand is a jumping minute hand, which is an insanely cool horological trick, even if a bit of overkill.