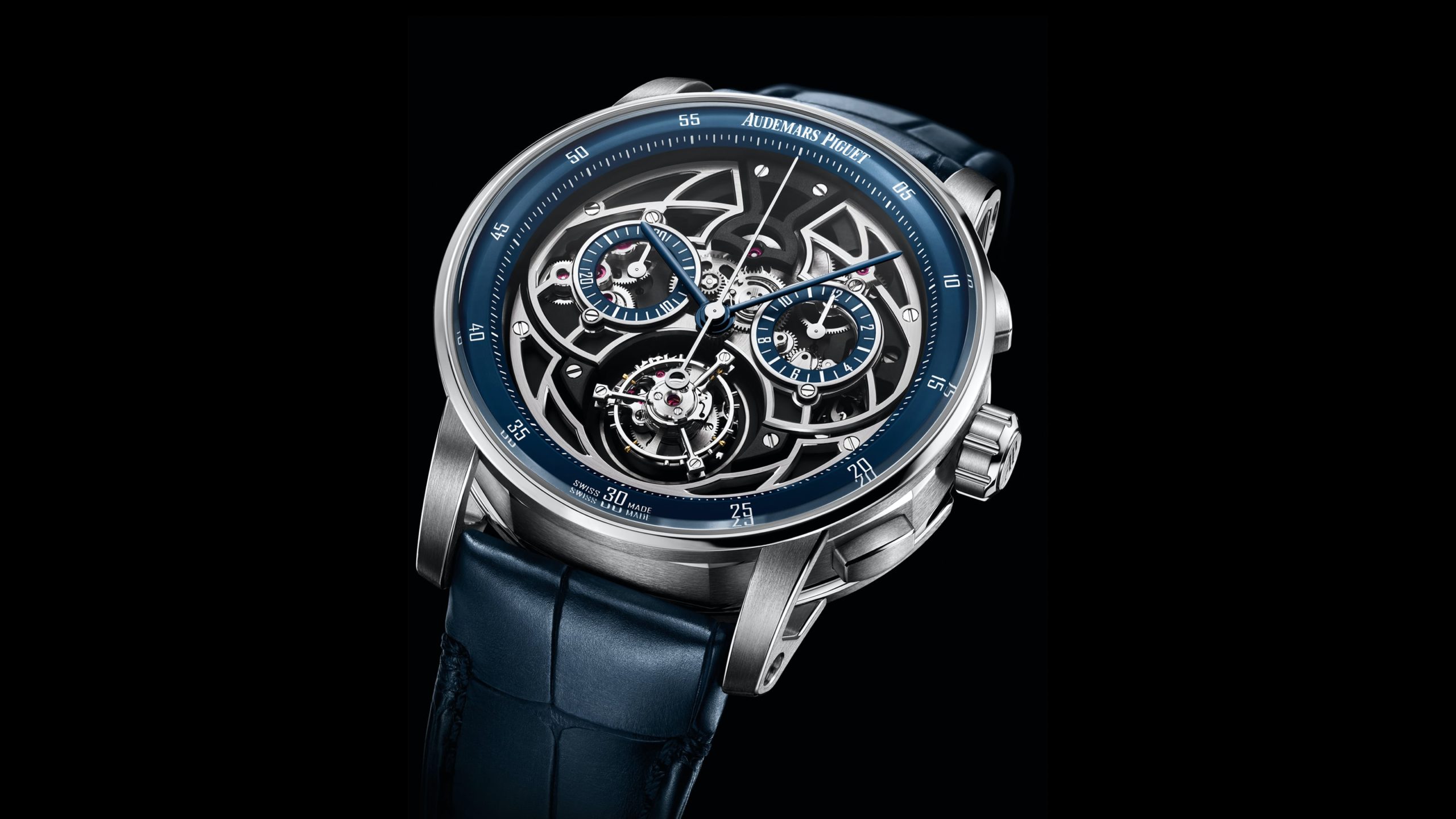 Released during SIHH 2019, the Code 11.59 collection from Audemars Piguet was received with severe criticism by the watch fraternity. However, Audemars Piguet seems to have taken the response positively and has lately been working hard to make the Code 11.59 evolve by adding intriguing timepieces such as the new Flying Tourbillon Chronograph. Combining a flying Tourbillon and a heavily skeletonized face, this new watch is perhaps the most ambitious Code 11.59 model released to date. 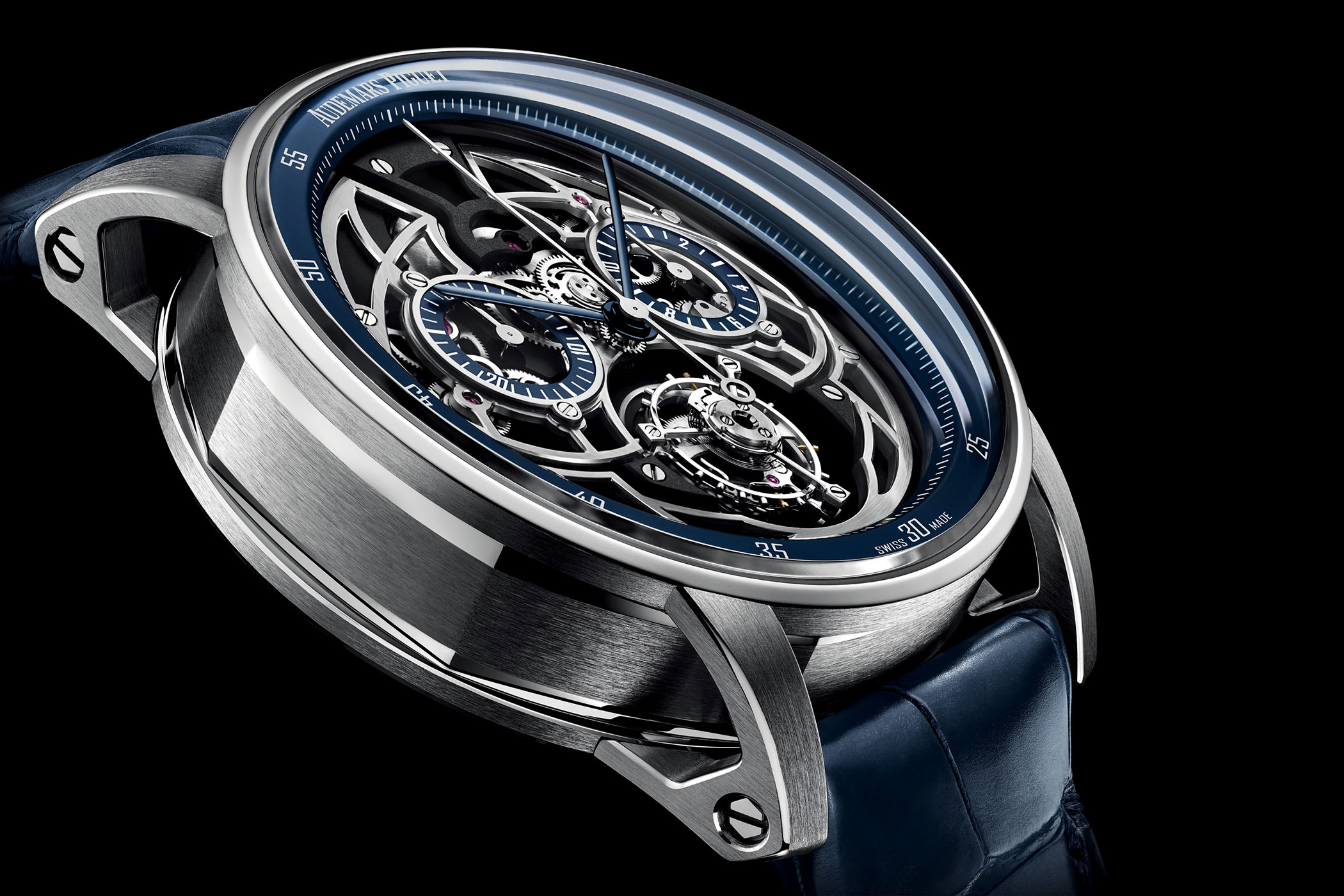 Open-worked dials are a mixed bag. Whilst they do exhibit artistic craftsmanship, they also end up sacrificing the legibility, which also happens to the case with the Code 11.59 Flying Tourbillon Chronograph. The dial on this watch has been meticulously carved out to bring the complicated internals to the forefront. The black and steel sections weave together to not only make a stunning visual statement but also offer a great backdrop for the two blue registers at 3 and 9 that track the chronograph hours and minutes. Located at 6 is a large circular aperture that houses the heart of the movement, the flying Tourbillon. The flange on the outer periphery has been presented in a lacquered blue finish like the one found on the sub-registers and features a white printed chronograph seconds track along with minutes in double digits on the top. The entire handset has a baton-style shape with the hour and minute hands blued to match the sub-dials. And while the hands are well-proportioned, reading time could be a little tricky at times. 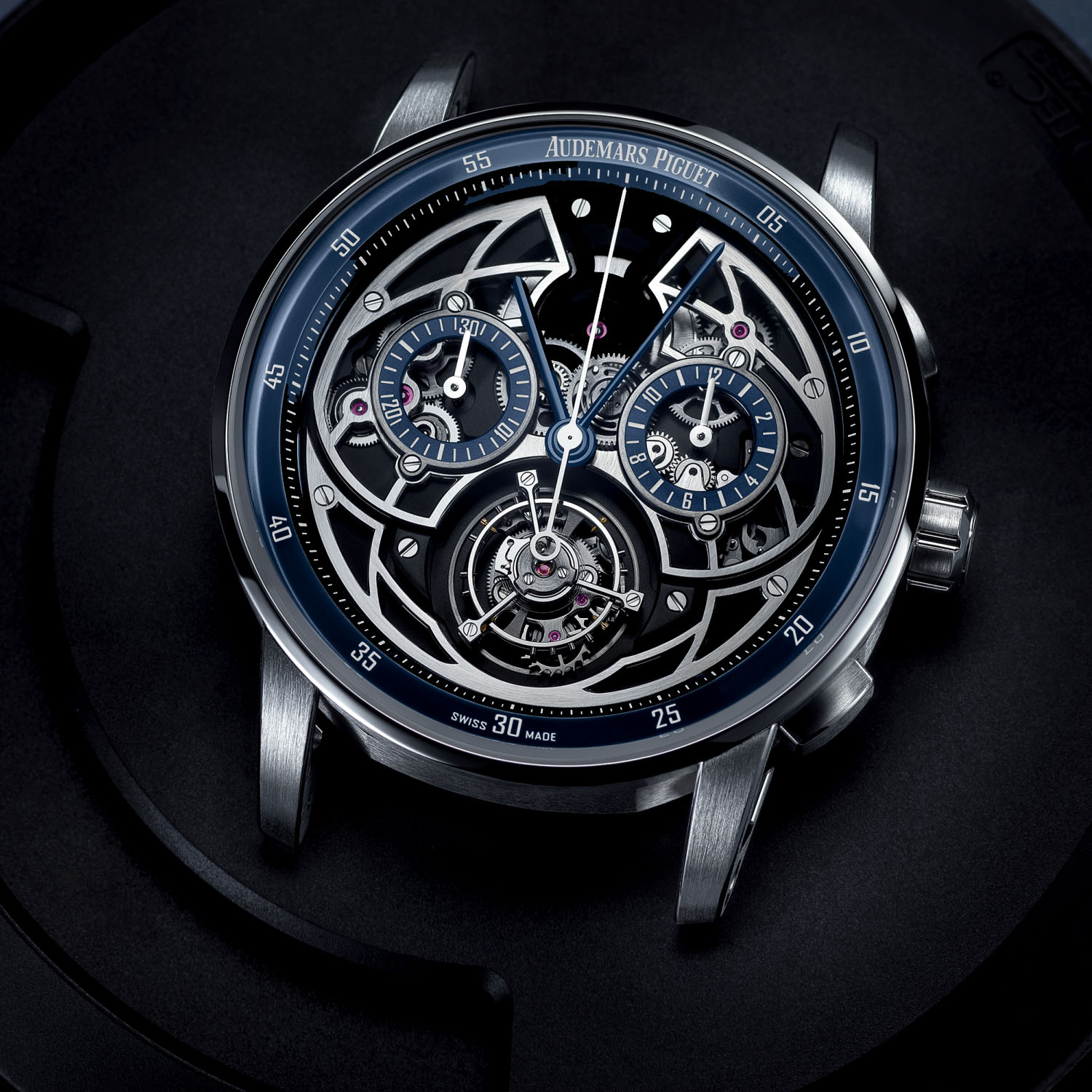 The 18k white gold case on this watch like other Code 11.59 watches is a piece of art. It measures 41mm in diameter and has an architectural vibe associated with it thanks to a heady mix of curved and angular surfaces that have been finished to a very high standard. One of the design elements that truly stands out on the case is the skeletonized lug structure that echoes the details on the dial. There are sapphire crystals on both front as well as the back, and water-resistant is limited to just 30 meters. 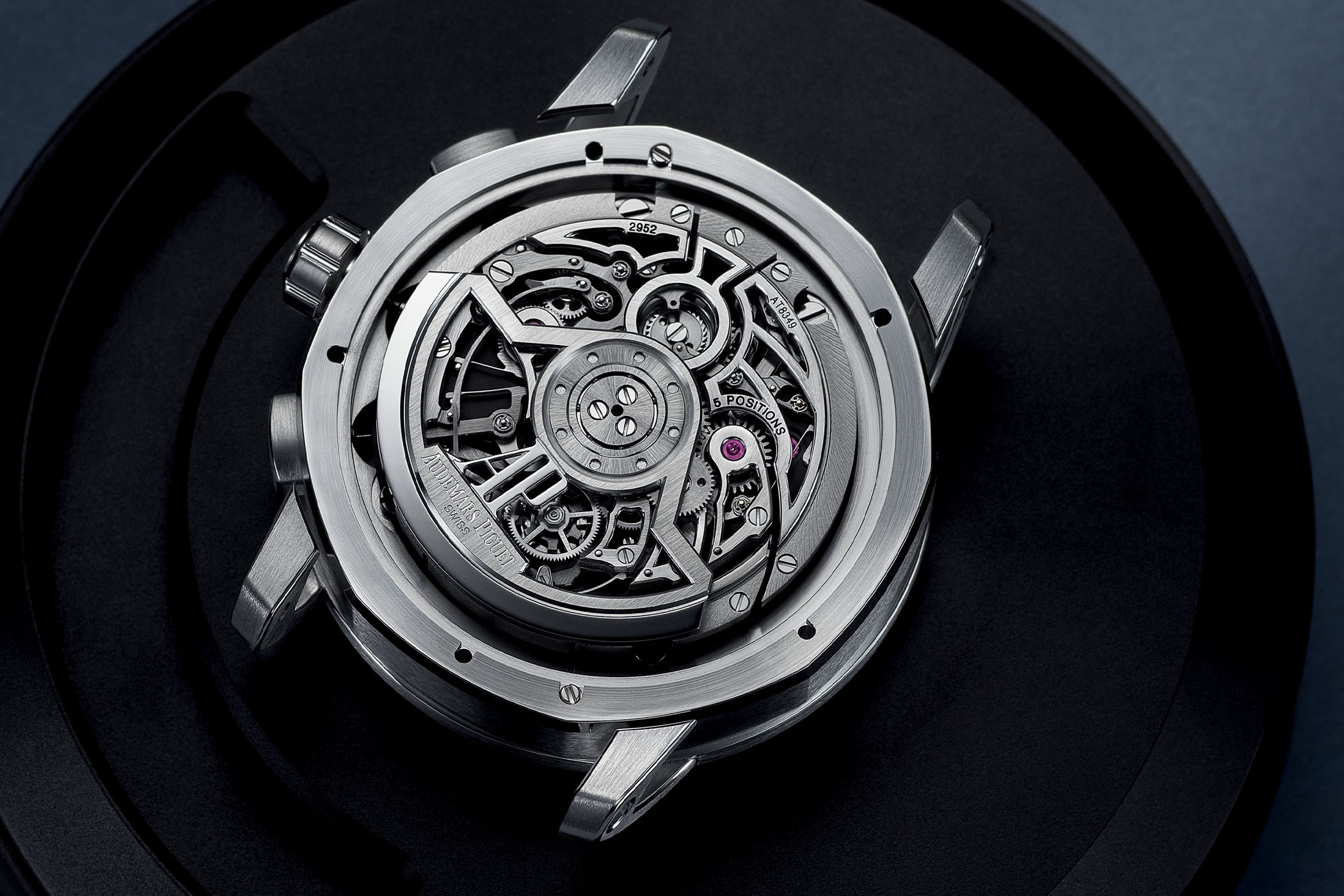 Driving this watch is Audemars Piguet’s in-house open-worked calibre 2952. This is an automatic movement that comprises 479 components, operates at a frequency of 3 Hz, and offers an autonomy of around 65 hours. The movement is beautifully finished and can be seen through the sapphire case back as well as the front. 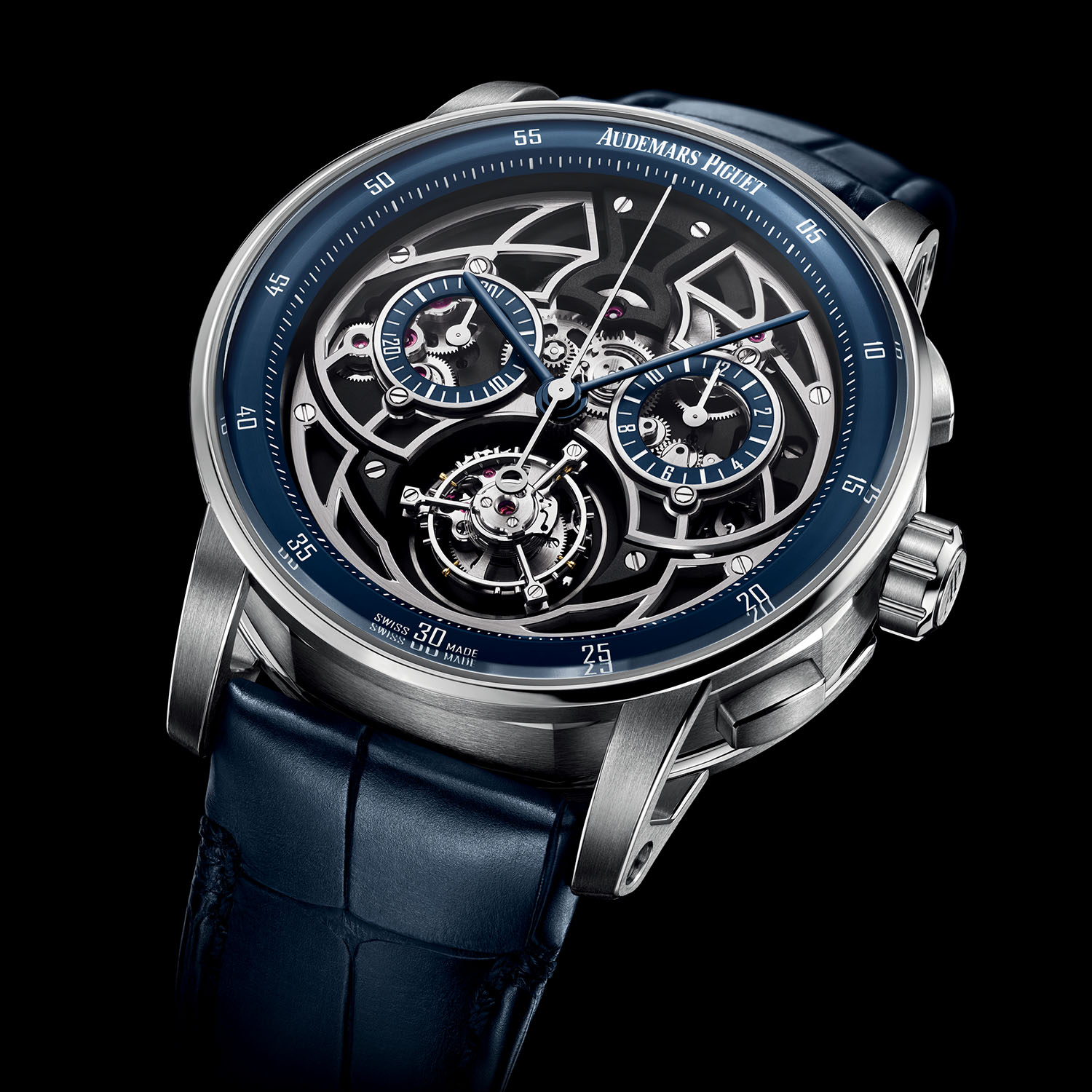 The new Audemars Piguet Code 11.59 Flying Tourbillon Chronograph is accompanied by a blue alligator strap. The watch is limited to just 50 pieces and the retail price has been set at CHF 240,000.