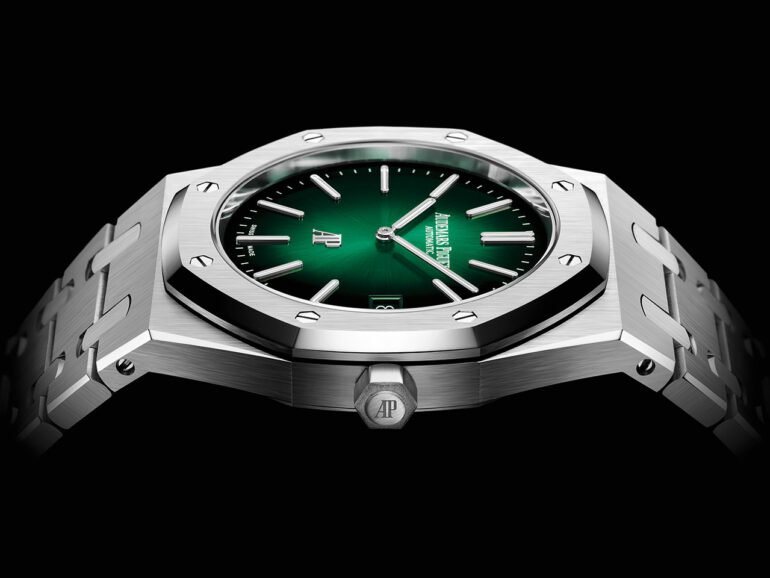 Audemars Piguet shares with us its vision for a green future.

As I’d expected (and possibly predicted, I forget), the colour blue has had its day on watches. We’ve seen all manner of them adorned in my favourite colour over the years, from the stylish and contemporary like white gold Submariner or the new Seamaster 300 Diver to the exquisite blues of Credor’s Eichi II and H. Moser & Cie’s Streamliner Flyback. Now, tastes are changing, and with the world being more concerned than ever about being environmentally friendly, it’s fitting that green is becoming the colour of choice for watchmakers. With that in mind, Audemars Piguet is leading the charge with five new green-themed Royal Oak models. 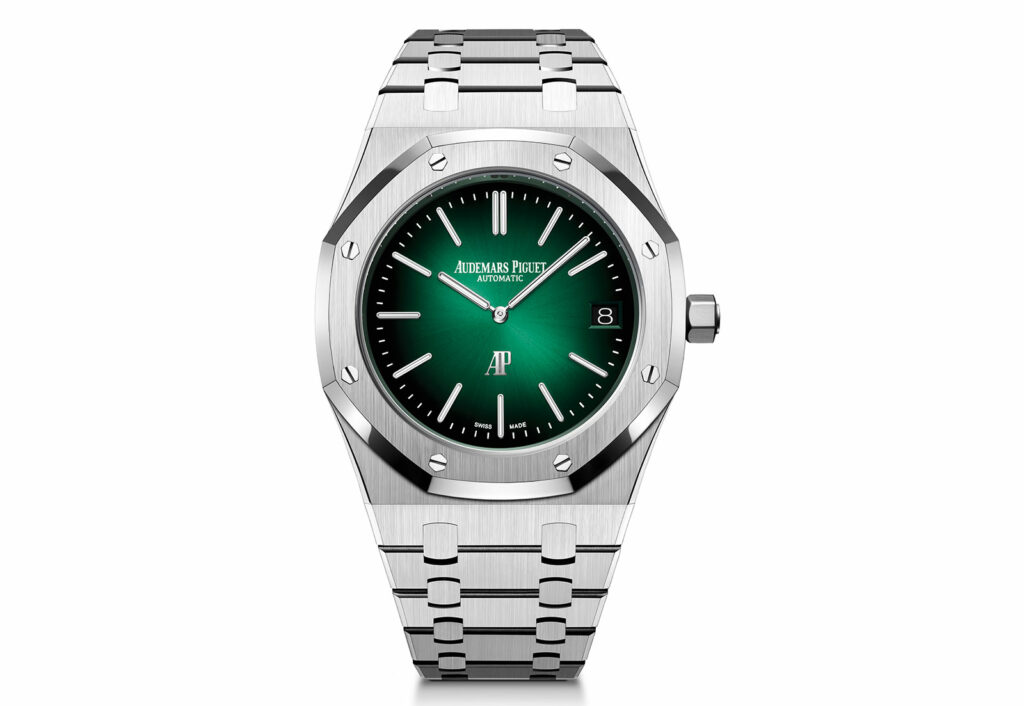 The Royal Oak “Jumbo” is a rarity, but this one’s going to be even more so as the case is made of platinum and the dial doesn’t have the brand’s signature tapisserie guilloché on the dial. The standard 15202 Royal Oak “Jumbo” can fetch double its retail price on the pre-owned market and has a waiting time at dealers of many years, so this green one will definitely be similar. That said, it’s handsome. The smoked green gradient dial with sunburst finishing looks excellent and provides an excellent base for the applied details such as the markers and the AP logo at 6 O’clock. The case measures 41mm x 8.1mm and houses the calibre 2121, a thin automatically-wound movement with 40 hours of power reserve. It’s not a limited edition model, but it is only available through boutiques for a price of CHF90,150 before tax. 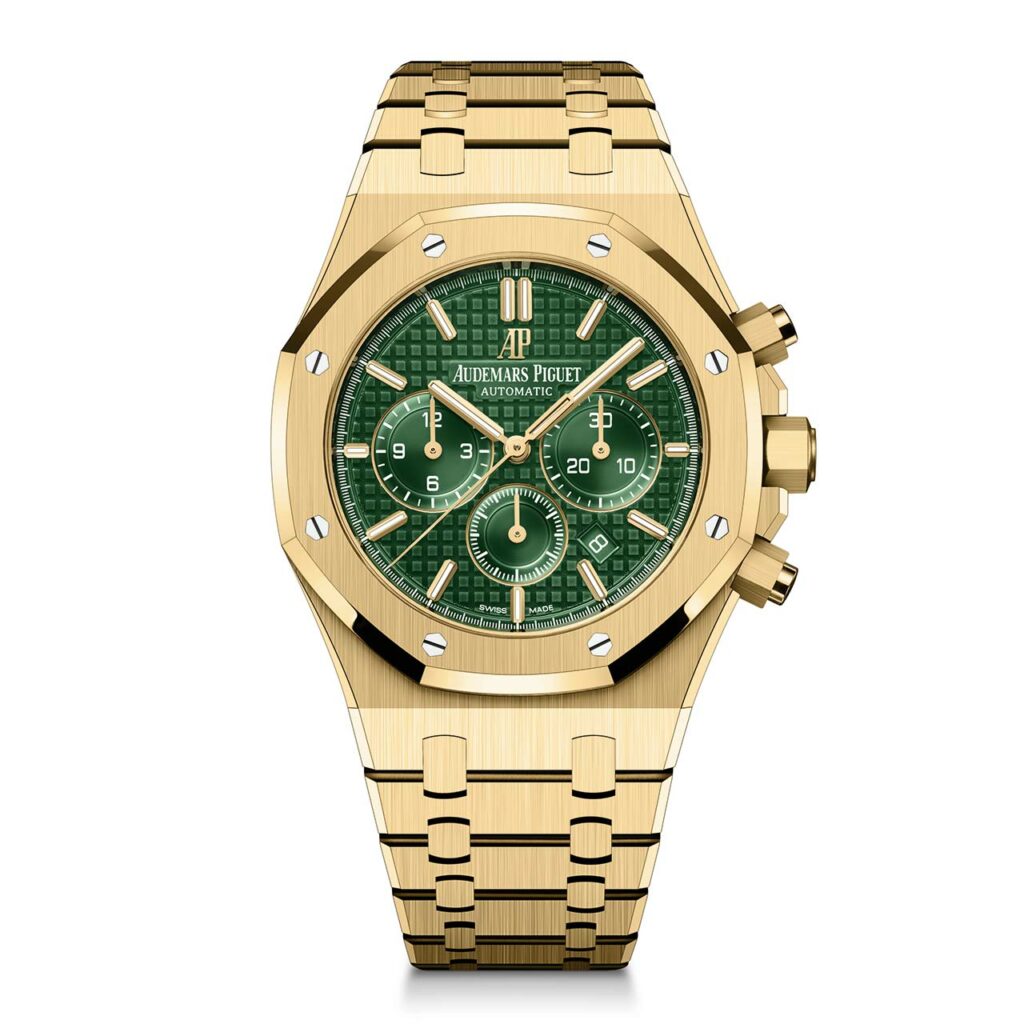 The next in the collection is a solid gold number, so, perfect for the rappers that make up Audemars Piguet’s clientele. It features an 18k yellow gold case which is 41mm in diameter and has an expected thickness of 11mm. The green dial with tapisserie guilloché works well here. I like how it interacts with the yellow gold colour. The AP logo on this watch is made of 24k gold. It also features contrasting bolts on the bezel and has an automatically-wound movement inside. Unlike the previous model, this one is limited in production to just 125 watches, price on application (if they haven’t all sold). 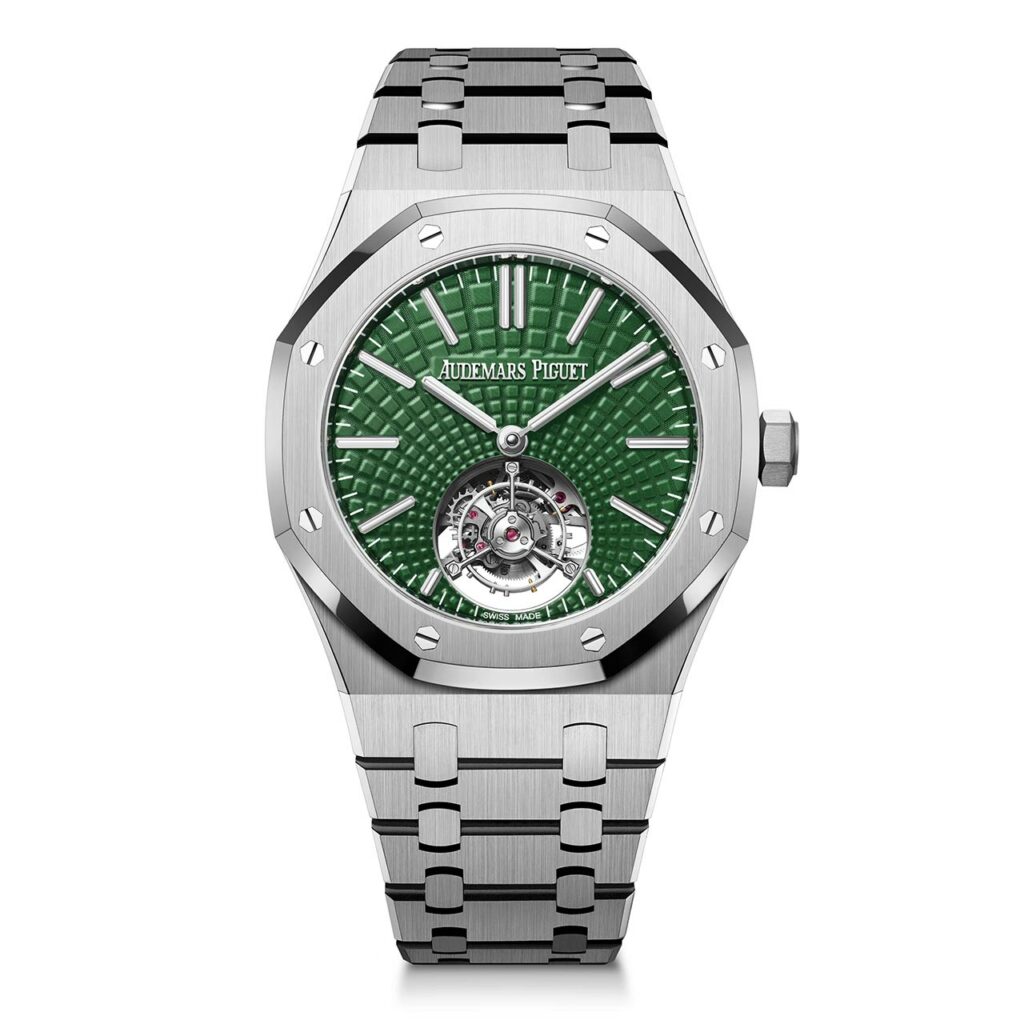 The other three models are broadly similar, so I won’t spend loads of time talking about their features (all models are price on application). The first is a flying tourbillon variant of the self-winding Royal Oak. Unusually, for a watch of this calibre, the case and bracelet are made from titanium, allowing it to be light and easily wearable. It features the same green colouration on the dial as the other models. It has a charismatic Evolutive Tapisserie dial which sees the typical pattern modified, so it explodes outwards from the centre of the flying tourbillon cutout. The case is 41mm in diameter, and Audemars Piguet has limited this version to just 50 examples worldwide. 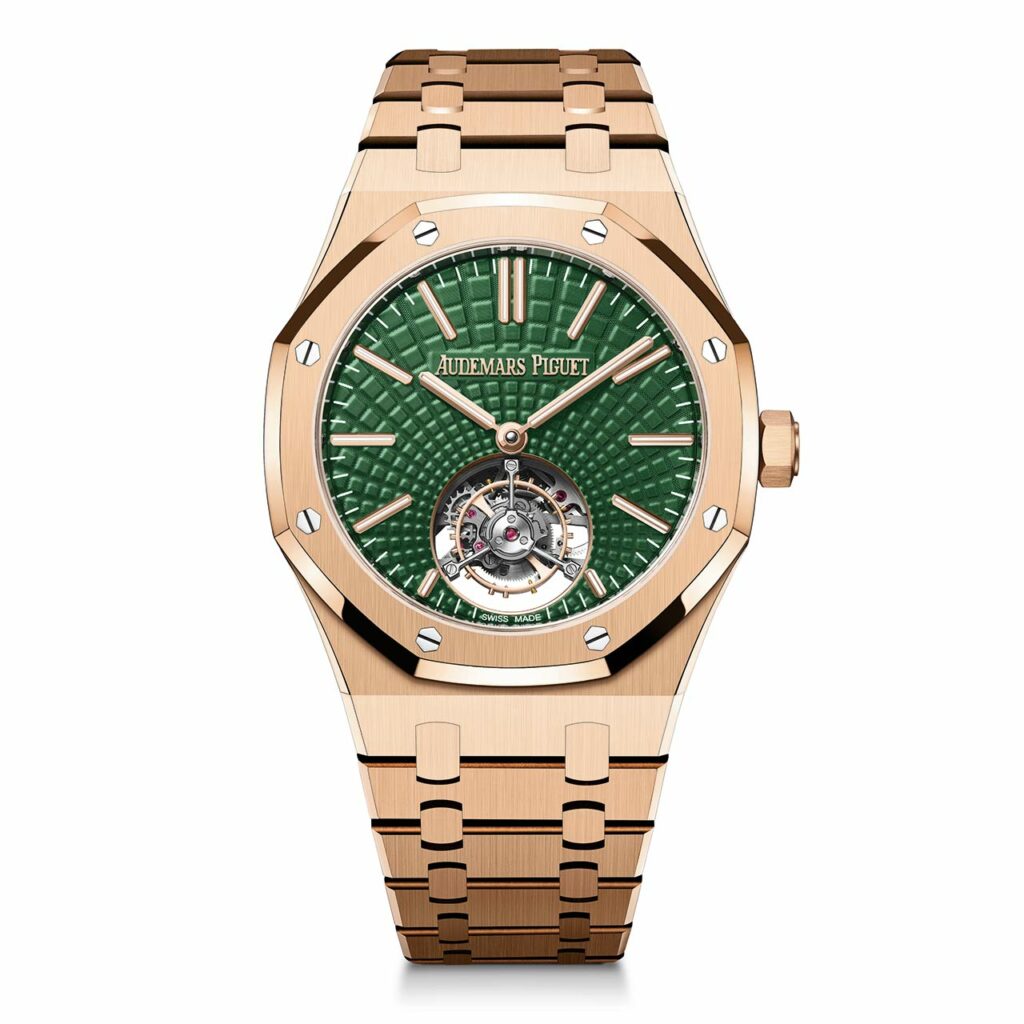 The Royal Oak Selfwinding Flying Tourbillon’s following variant features a solid 18k pink gold case and bracelet with contrasting bolts. The polished surfaces and iconic case shape indeed up the ante with this model, as does the flying tourbillon. While most debate the need for a tourbillon, few can dispute the artistic and mechanical skill that goes into making one. Further, the flying tourbillon adds extra complication by removing the supporting bridge at the top of the tourbillon. It’s not as easy as leaving that bit off, as the tourbillon needs a support that can hold it up and also supply power to the escapement assembly, and that’s no small feat. This watch is limited to ten examples only. 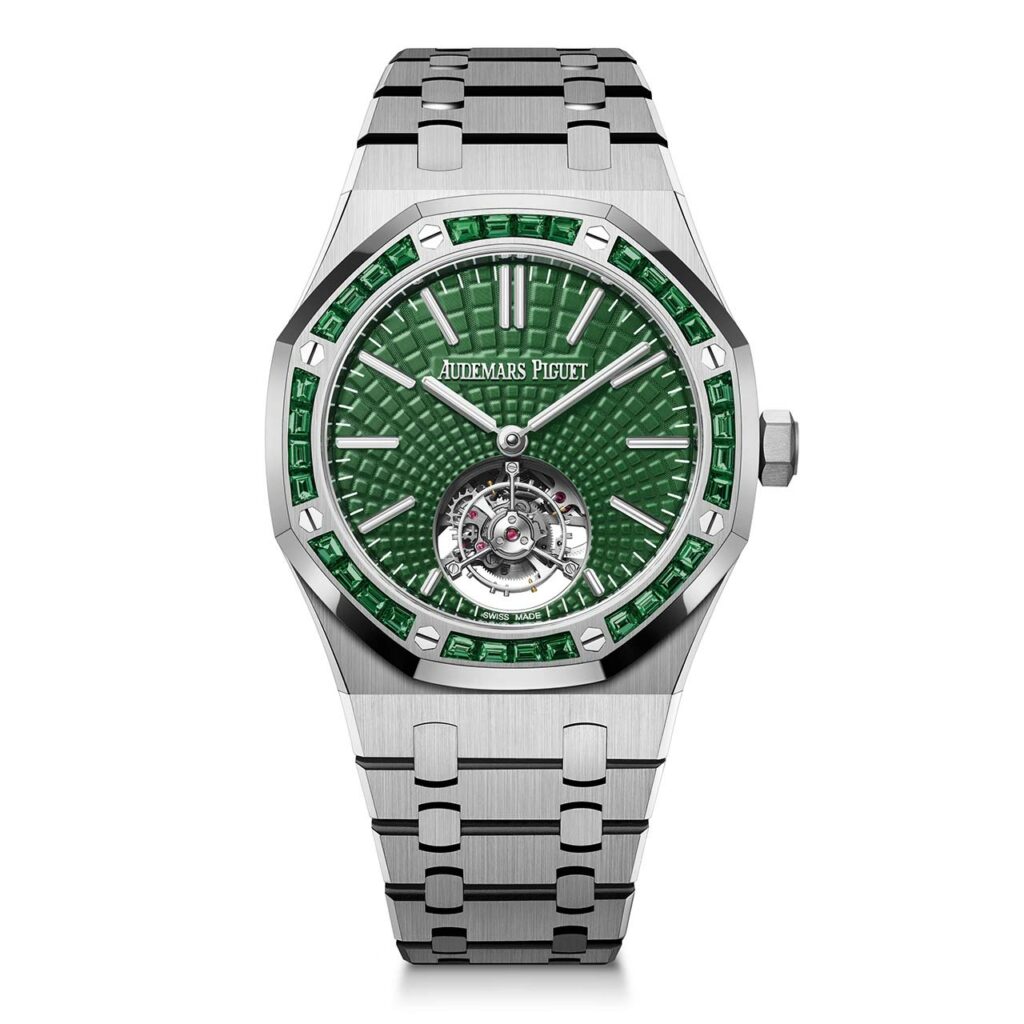 The last one is undoubtedly the most, ahem, striking. It features a titanium case and bracelet, just like the first of the three self-winding tourbillon models we’ve looked at. It also features a bezel made of 18k white gold and set with 32 baguette-cut emeralds. The specific baguette cut of these emeralds means they’ll sparkle and stand out on a watch which arguably does not need it. But, I find them to be un-offensive, and I’d love to have a go with one of these if only to say I have. It comes with the latest-generation flying tourbillon movement, the Calibre 2950, which beats at 3Hz and has a power reserve of 65-hours and a contemporary finish, it’s the same movement as seen in the divisive Code 11:59 range. This model is limited to just 15 pieces. 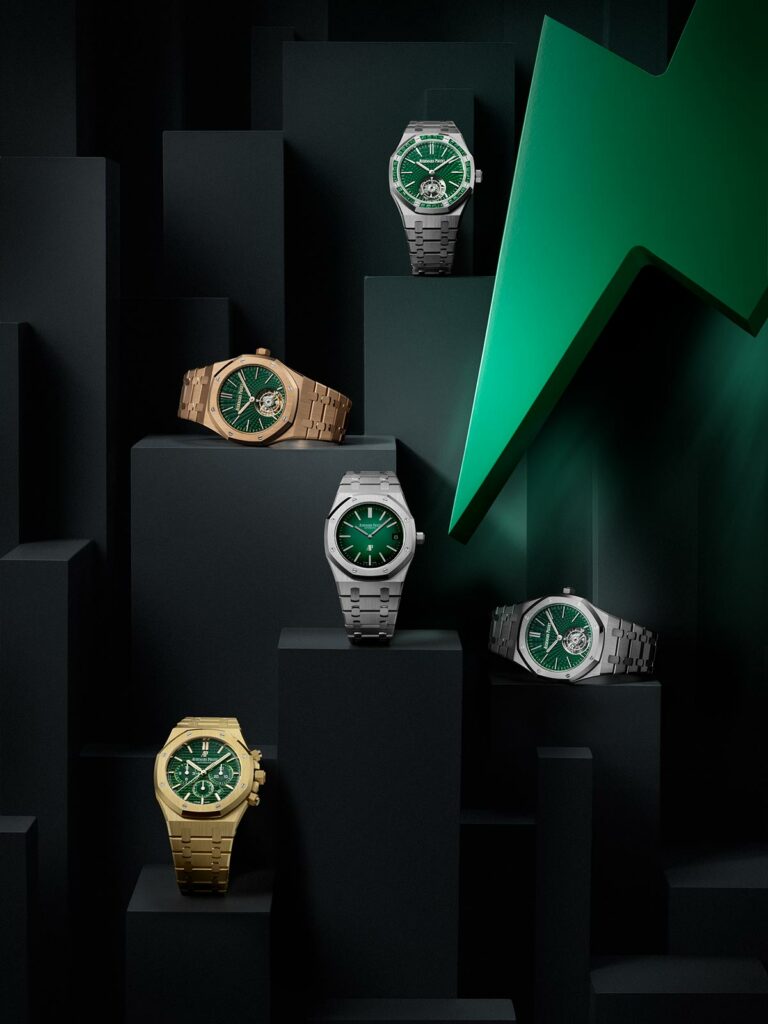 So, these are the new watches added to the Royal Oak collection. There will doubtlessly be more in the next few months; Audemars Piguet has already updated the Royal Oak Offshore Diver collection recently as well. Which of these is your favourite? Let us know in the Disqus comments section below!