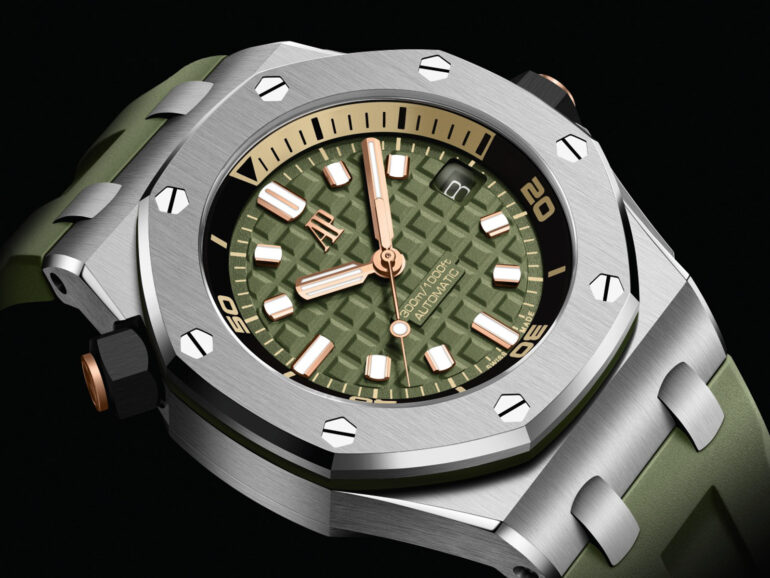 Audemars Piguet's next watch in the 2021 upgrade program is the Offshore diver.

For a long time, fans of Audemars Piguet’s horological side were left wanting with the Royal Oak Offshore collection thanks to a slew of movements with bought-in modules and average-but-not-fantastic performance. The one turn-off of this horological powerhouse’s meaty sports watch line was that there were far better alternatives with equally interesting designs and bulky proportions with a lot more oomph under the bonnet. A couple of years ago, and to the dismay of nearly everyone, Audemars Piguet unveiled the Code 11:59, which came with a brand new set of in-house movements. While most people were losing it in the Facebook Groups about the so-so design, I wondered how long it would take them to get those movements into the Royal Oak Offshore. Well, now I can wonder no more. 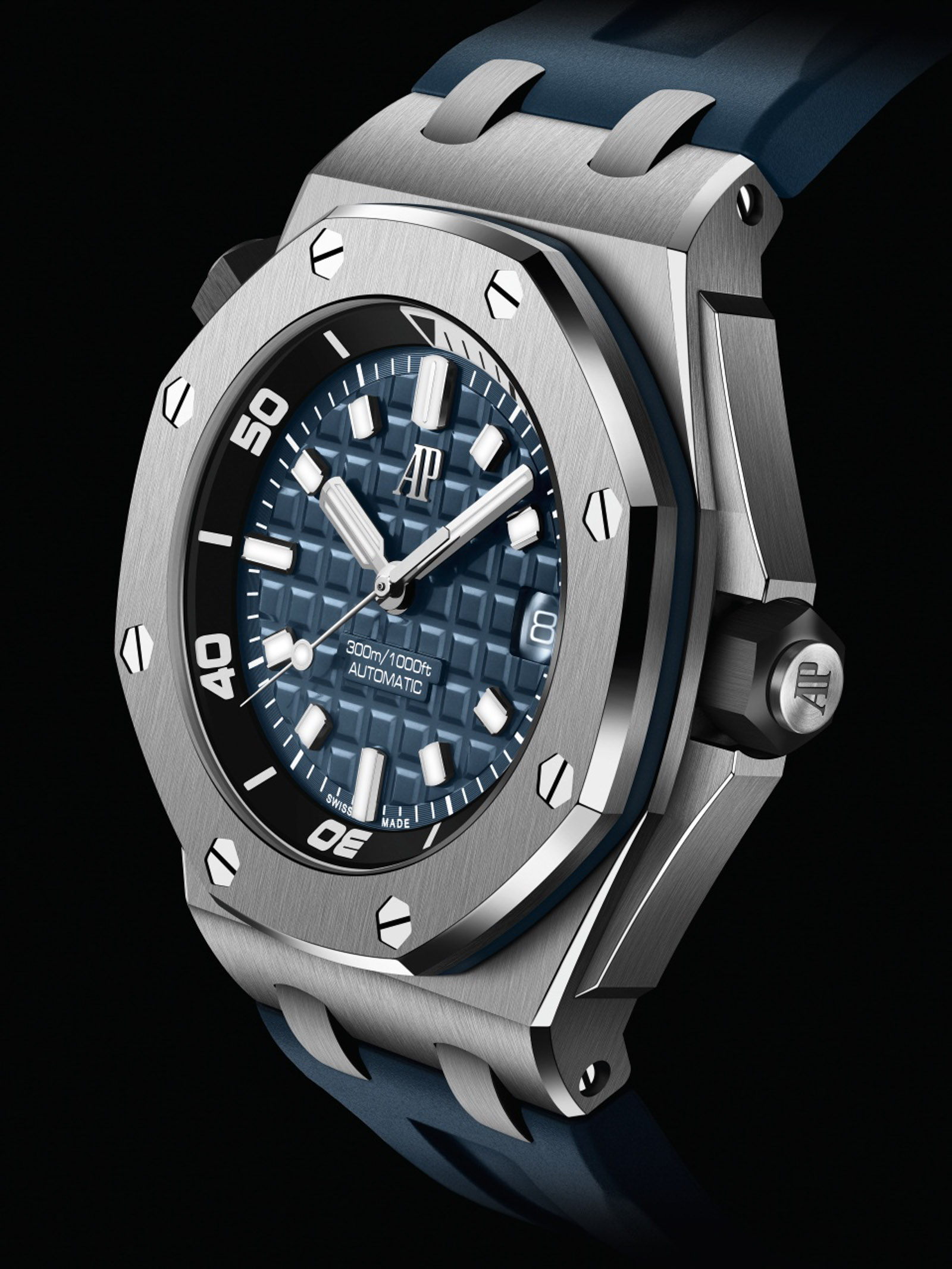 In our roundup of Audemars Piguet’s 2021 changes, the next watch is the update to one of my favourite watches in their collection: the 42mm Royal Oak Offshore Diver. It was a big and bulky watch, but without any extra complications, it was pretty reasonably priced, and thanks to all the permutations that are a key to the Royal Oak Offshore design, it still looked like a genuine product rather than an Offshore for poor people. 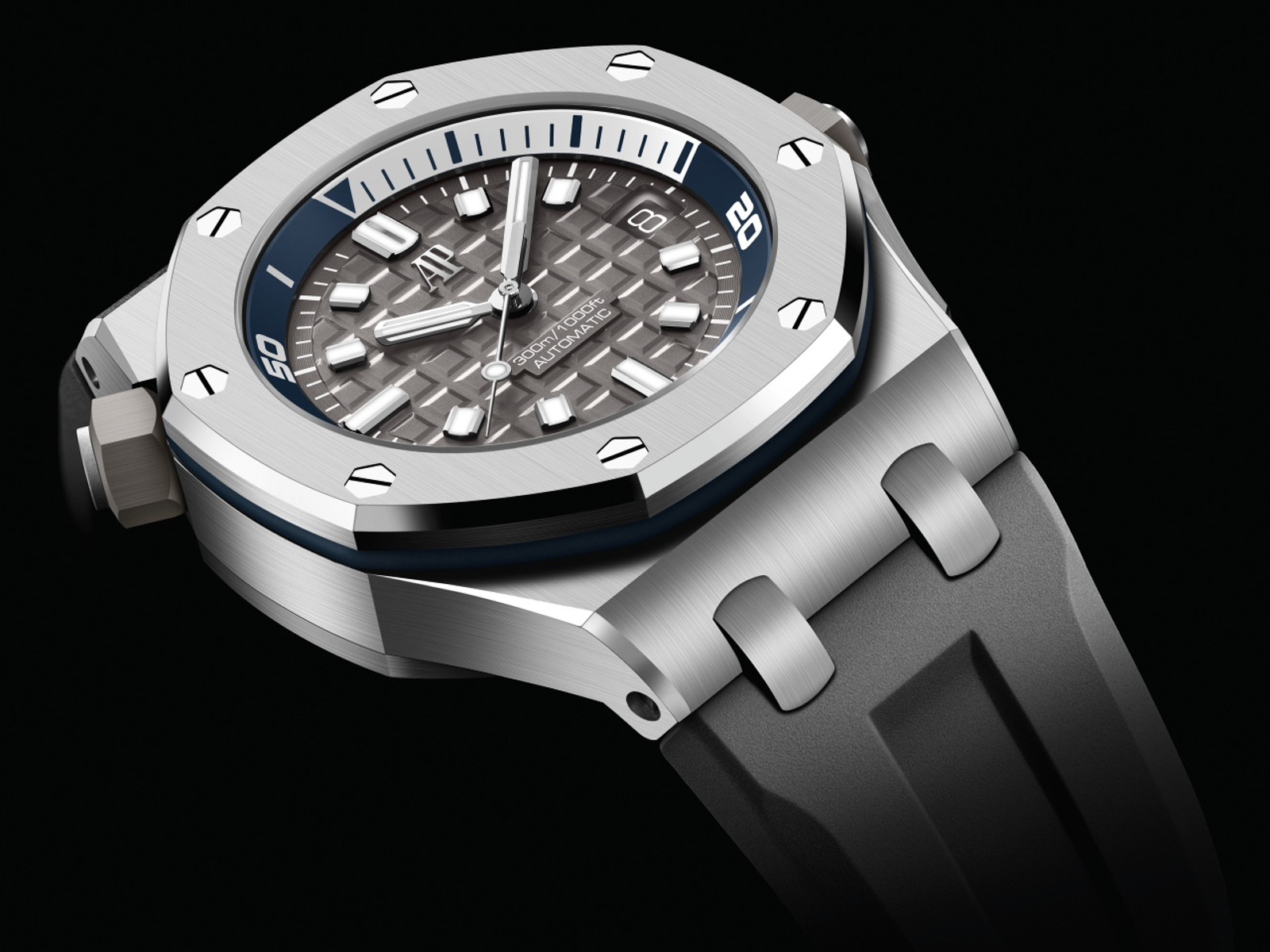 For 2021 Audemars Piguet has changed a few things. The most noticeable is the change to the markers. Before, they were long and thin, but now they are big and chunky. In the rendered images you see on the screen, their shape is obvious, but I suspect they’d look rounder in real life. This is definitely Audemars Piguet moving closer to the Submariner look, although this is leaps and bounds ahead in every department other than the ‘dubious-similarities-you-might-see-in-the-dark’ department. 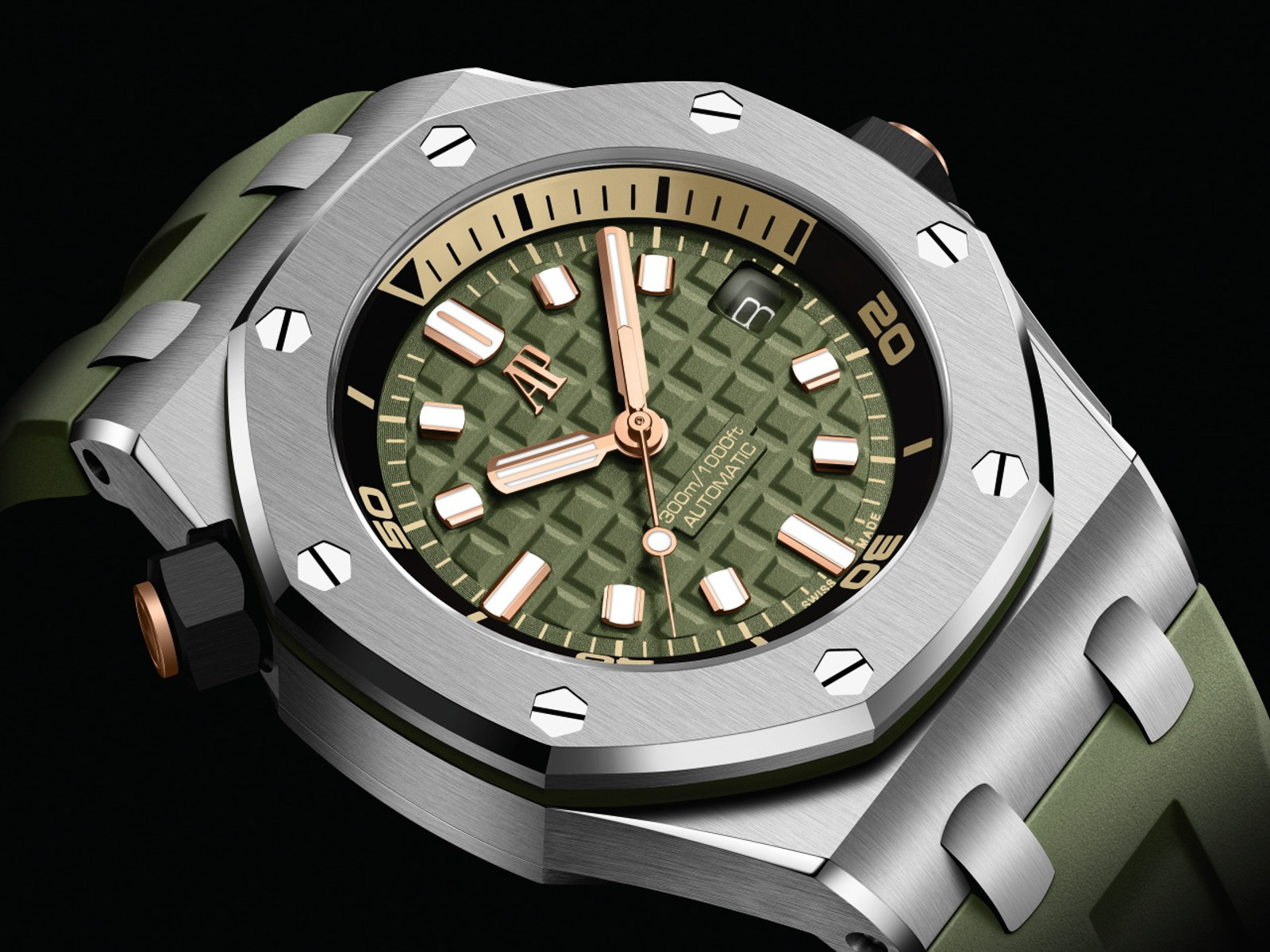 Audemars Piguet is still using Méga Tapisserie guilloché for the dial, which reminds me of the top of a chocolate bar. Oddly, they haven’t chosen to use the new style of Méga Tapisserie with crosses, as seen on the 43mm Offshore chronograph collection I looked at the other day. Another oddity of the dial is the magnified date. It appears that the magnifying lens for the date is built into the date window instead of being tacked onto the glass so it can annoy people who can’t afford it.

The inner-rotating diving bezel remains unchanged as well. It’s controlled via a crown at 10 O’clock and is designed for scuba divers who would have used it to keep an eye on their time remaining underwater. Nowadays, computers can do that far more accurately, but it’s good to have a failsafe. To complement that diving potential, the 42mm case is water-resistant to 300m. 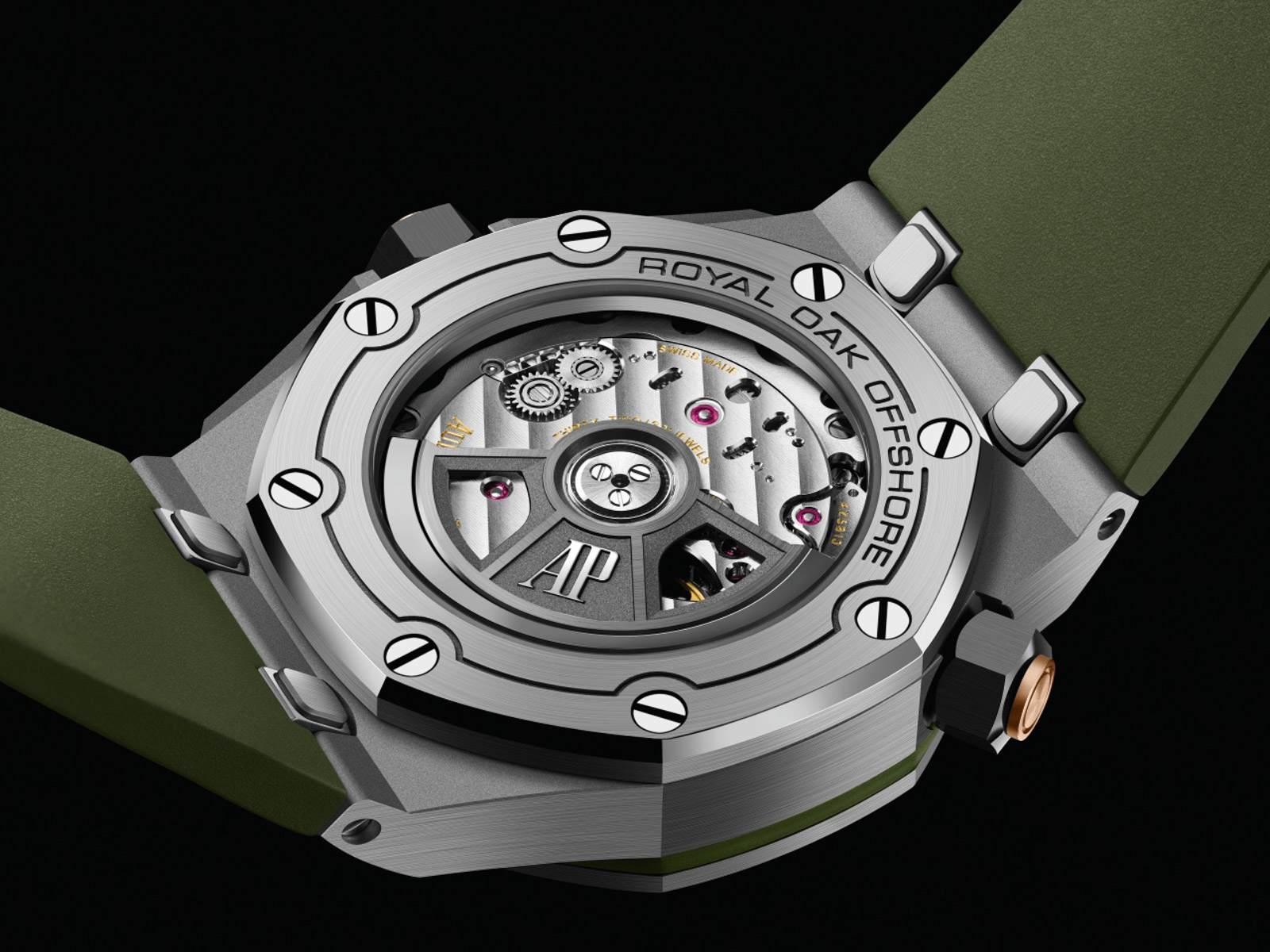 Inside said case is the calibre 4308, a movement with a 60-hour power reserve and a beat rate of 4Hz. It features all of the mod-cons of a movement from an haute horlogerie producer such as Audemars Piguet, including circular graining and Geneva stripes on the plates. The grey partially-skeletonised rotor gives this luxury watch a robust feel, although I do miss the gold engraved rotor of the old 3120 calibre.

Audemars Piguet has also changed the strap system around, being one of the very latest to incorporate a quick-change system onto its straps. Pressing both the buttons on the back of the strap where the lugs intersect will release it, allowing you to fit another (probably expensive) strap. We don’t know yet if older straps are compatible with this system.

Audemars Piguet is offering the watch in only three colour variants to start. There’s blue on blue, featuring a blue dial, bezel and strap. There’s khaki on khaki, which is the same combination but a different colour (and gold hands and caps for the ceramic crowns), and there’s blue on grey, which features a grey dial and strap with a blue inner-rotating bezel. No black on black option yet. Maybe that’s because it was the most popular and they need to shift the stock of colours they have. I may have made that up, though.

These watches are not limited edition watches and will cost you CHF21,500 before tax.