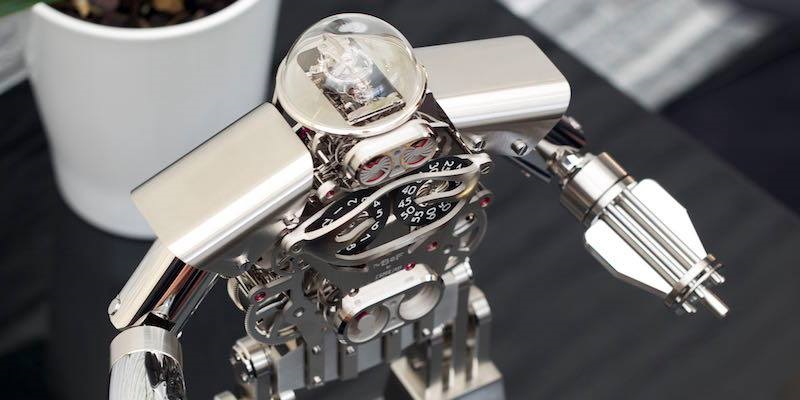 MB&F celebrated their 10-year anniversary at Baselworld 2015 with one hell of a cool release. This year’s theme was under the banner “A creative adult is a child who survived”. With such an inspirational theme, it was only fitting for MB&F to build a masterpiece to match, and match they did. Melchior was presented to us when we stopped by the MB&F booth for a sit down with the young manufacture and it felt like being a child all over again. Created with the esteemed clock mater L’Epée, the kinetic robot is a beautiful and outrageous 480-component mechanical table clock. 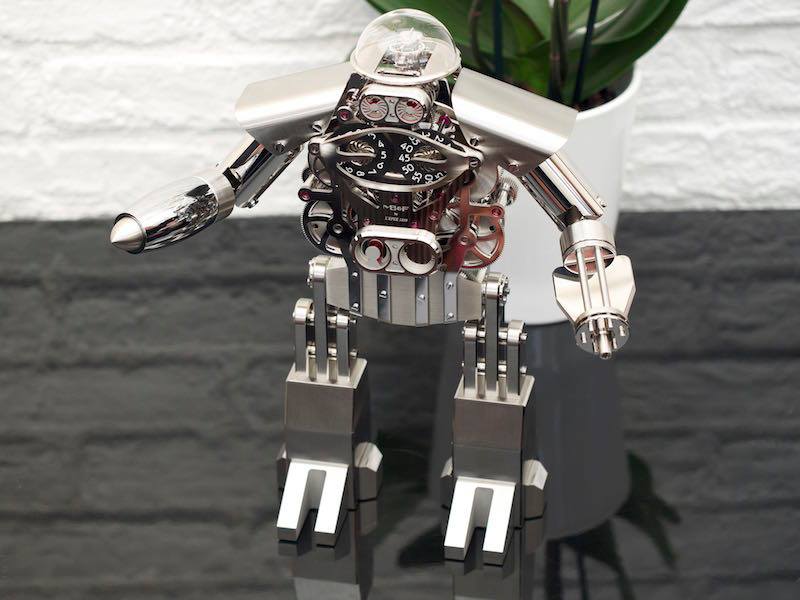 Fitted with steel and brass armour, animated brain and outfitted with rocket launcher and Gatling gun, Melchior is the one robot you want protecting your tabletop goodies from any pesky intruders. Melchior was conceived and developed by concept lab MB&F, and engineered and crafted by L’Epée 1839 – Switzerland’s only specialised high-end clock manufacture. The quest by Maximilian Büsser’s for a robot companion of his childhood dreams has been realised in Melchior as he dreamed of the years when films like Star Wars and robots like R2-D2 dominated the big screen and protected Luke Skywalker from harm. As only a child could imagine, Maximilian Büsser’s imagination brought him to create Melchior with the help of esteemed designer Xin Wang. 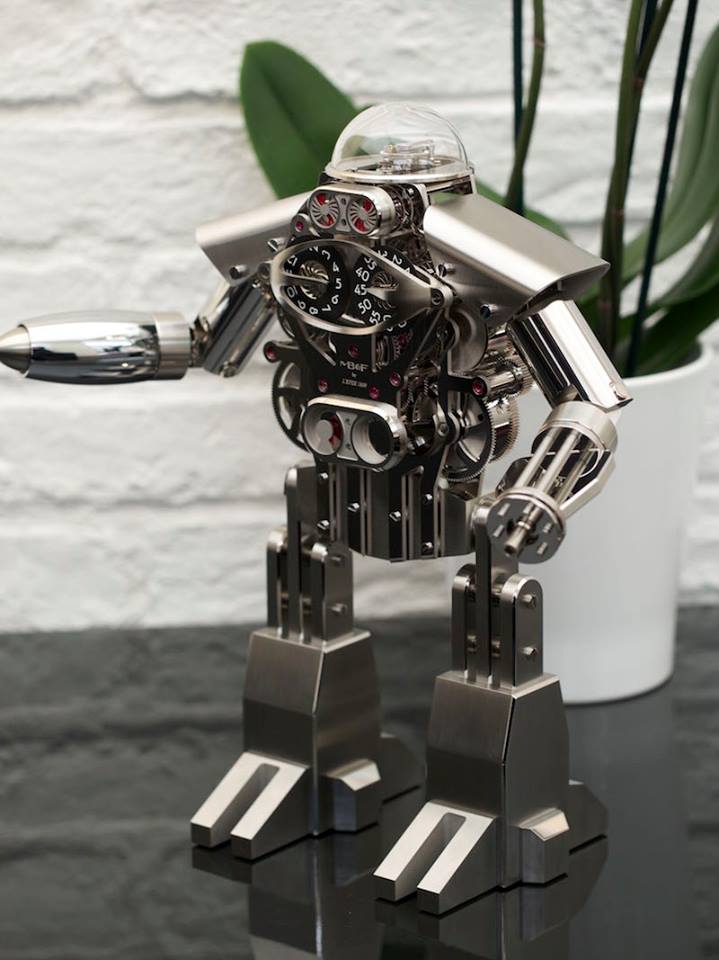 This was achieved by reimagining and redeveloping the high-end clock movement of L’Epée and giving it a mechanical head and the torso of a robot. The use of jumping hours and sweeping minutes on Melchior’s chest are displayed on discs bearing the MB&F signature numerals – with pointers incorporated into the breastplate – while a dial on Melchior’s abdomen is the power reserve indicator. And as if Melchior didn’t have enough going for him, the beautiful movement boasts a power reserve of 40 days! Yes, 40 days not hours. Why is this a big achievement? Well that is because most table clocks have an 8-day power reserve at best. This amazing achievement is thanks to the 5 main spring barrels, which help make up Melchior’s torso. The barrels are in a series for optimal performance. The retrograde action of Melchior’s eyes marks off intervals of 20 seconds. Through the use of dual layer revolving discs, both bearing radial propeller motifs, gives the impression that Melchior is opening and closing his eyes. 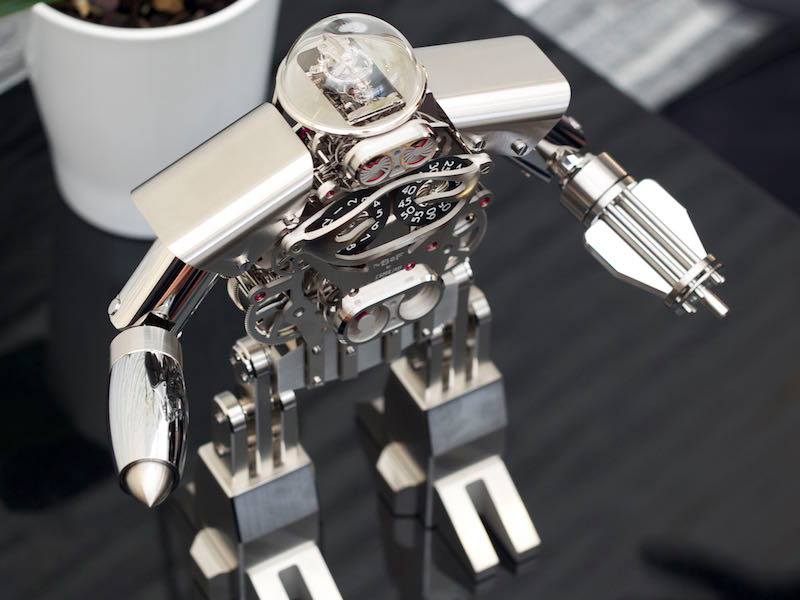 There is so much to love about this beautiful table clock that it becomes a thing that kids dream of and imagine owning one day. Even Melchior’s arms rotate and pivot for aiming the rocket launcher and Gatling gun at unsuspecting bad guys. What is a great little touch also the that the Gatling gun doubles as the winding/setting key for the movement that is accessed at the back of Melchior’s armour plate on his back. 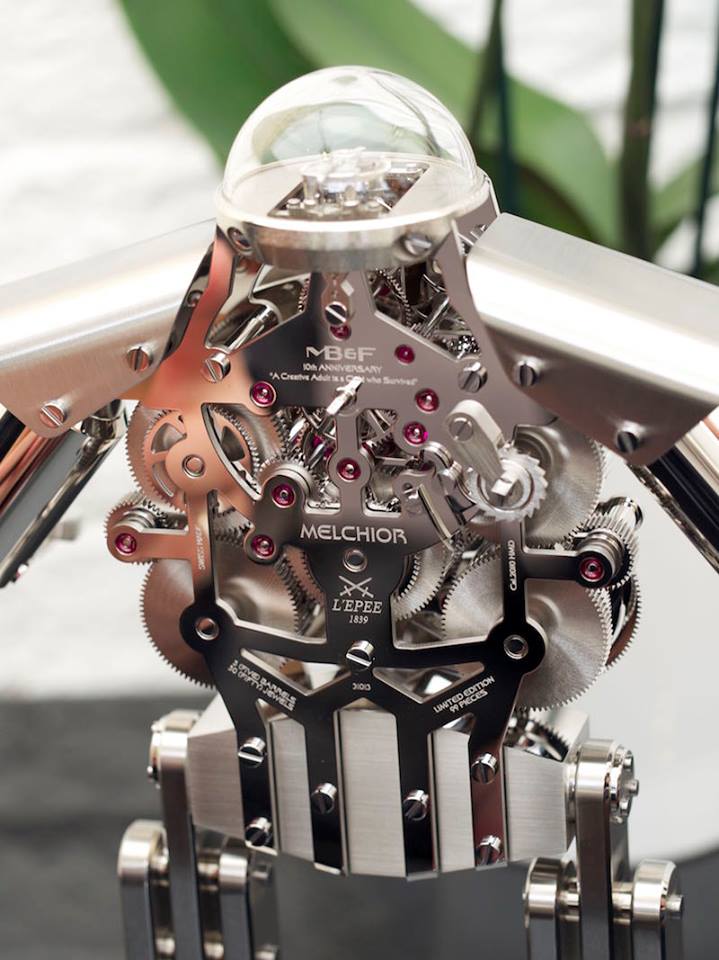 To say I love this piece is an understatement. It really is the thing dreams are made of as a child as you watch all those sci-fi movies and dream of magical robots that are by your side through thick and thin. As cool and crazy as it gets and just what we expect from MB&F.

Limited to just 99 pieces and available in a monochromatic ‘light’ edition or a two-tone ‘dark and light’ edition featuring black PVD-treated components.

The user manual can be found here