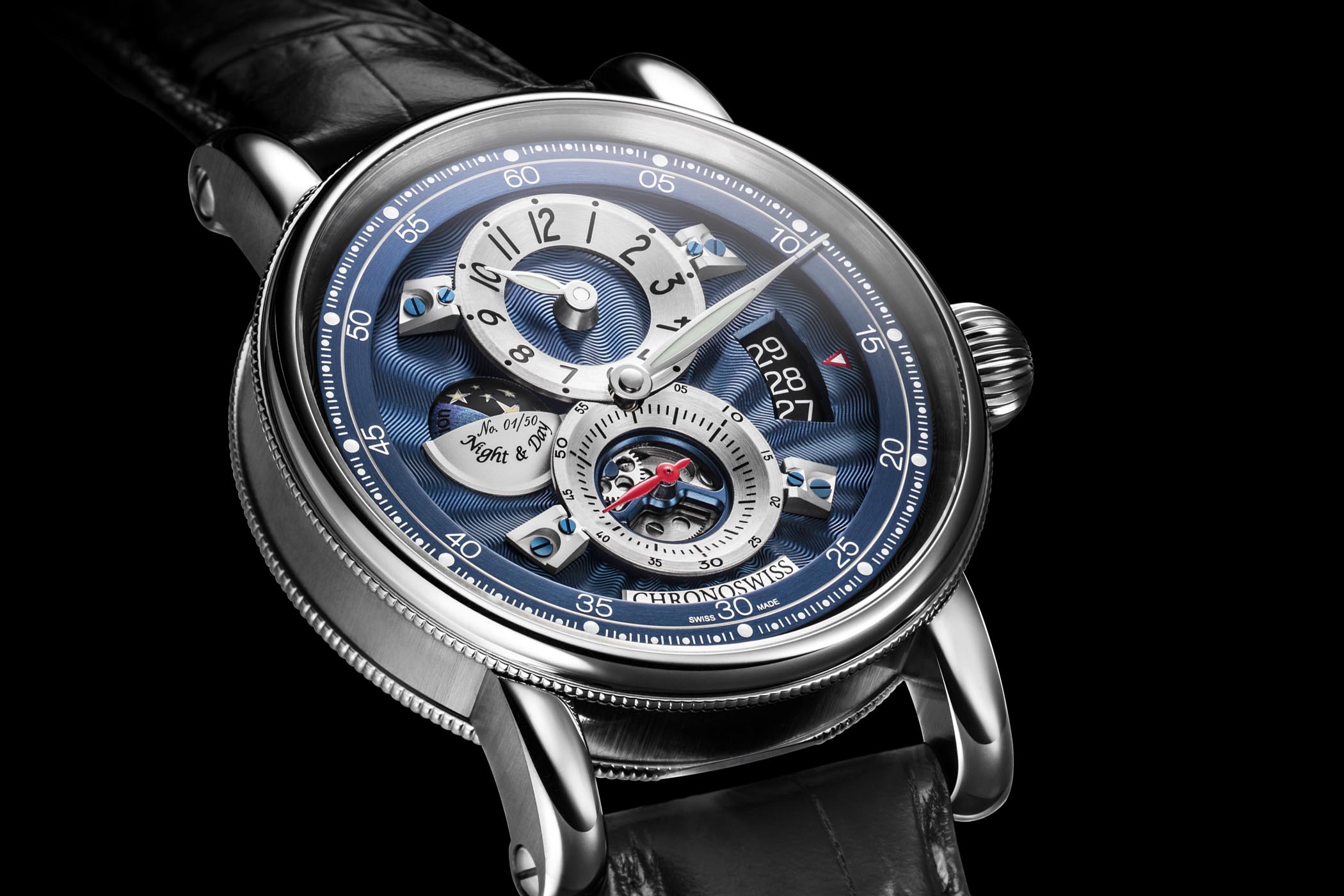 Now Tom Cruise isn’t my favourite actor but I thought Knight and Day was a good film… What? It’s nothing to do with that? It’s a different night? Oh, well, in any case, here’s the new Flying Regulator from Chronoswiss, a surprising manufacturer on many levels. We see seen regulator watches coming into popularity recently, the layout makes them easier to read. While many will command over $10k for the privilege of splitting the time up on the dial, the Chronoswiss regulators have sought to keep it real and down to earth, so that some of us can afford them, and it’s been doing it since 1987. 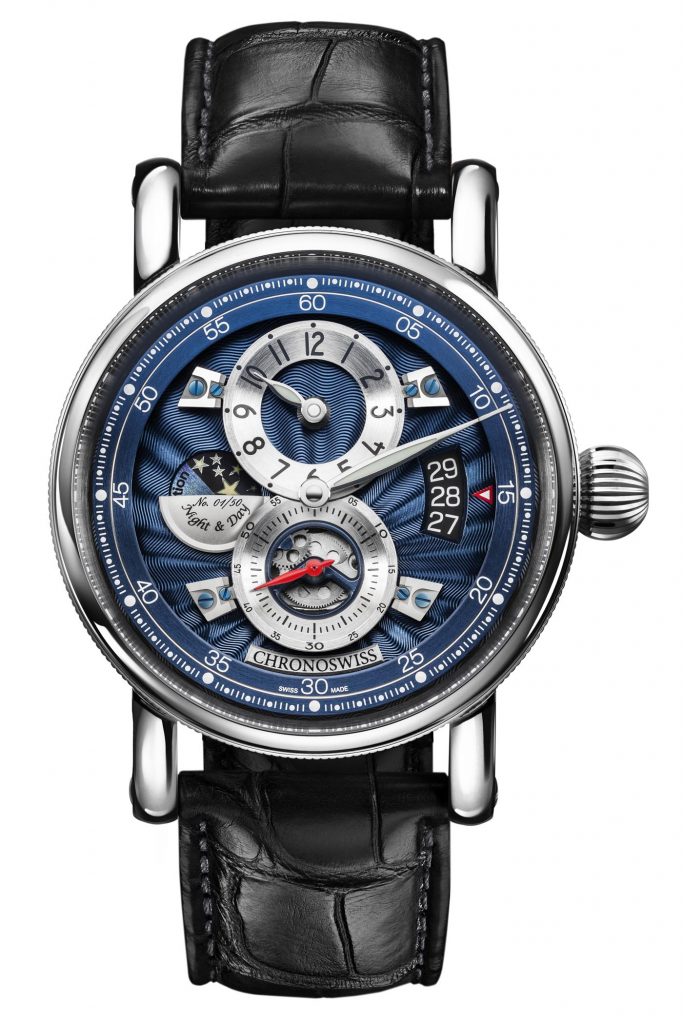 The new Night & Day limited edition watch comes in a 41mm x 13.85mm case, with some attractive knurling around the bezel and the back. The middle is a simple brushed finish to contrast the polishing of the top of the bezel and lugs. A big onion crown, another significant part of the Chronoswiss design, finds its way onto the Night & Day watch. 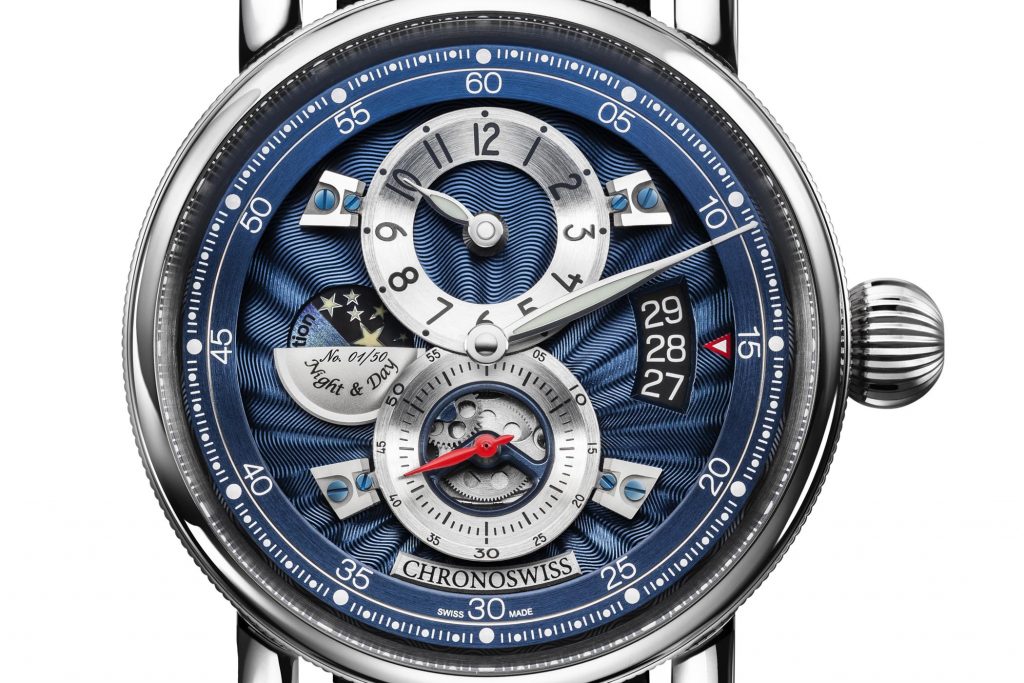 The dial on the Chronoswiss is certainly something to behold. The blue colouration of it matches with the silver rings and the touches of red on the seconds hand and the date pointer. Here, Chronoswiss has opted for a large date cutout, which shows three dates instead of one, with a red triangle to point to the current date. The multi-layered dial is covered in an undulating sunburst guilloché, with thick waves making it appear as a layer of velvet or melty chocolate. Blue chocolate that is. This is cut in-house on an antique rose lathe, the correct way to do it, no stamping here. The day/night indicator is made from titanium with laser cut stars that are filled with Super-LumiNova, while the day part reveals which number of the limited edition batch you have.

Inside the watch is the Chronoswiss calibre C.296, which is automatic winding and based on an ETA calibre, the ETA 2895 to be precise, to which Chronoswiss has mounted an in-house made regulator module. As such, the oscillation frequency is 4Hz, and the watch will run for a total of 42 hours, and there is an exhibition caseback too.

This new Chronoswiss watch, presented at Baselworld, has the reference CH-8763-BLSI and is limited to just 50 pieces, there’s no word on pricing just yet.