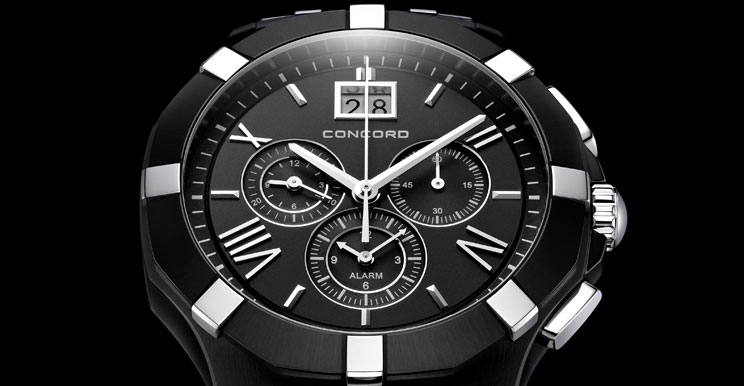 As the sporting pedigree celebrates the 150th years anniversary of Saratoga Race Course.

In celebration of this monumental event, Concord is launching Saratoga’s timeless original design in full PVD in the 2013 version of its 2004 Concord Saratoga SR. The Concord Saratoga Chronograph 2013 is the ultimate in sleek sports luxury, a contemporary watch in which its predecessor’s classic features are subtly metamorphosed into ergonomic perfection.
The thunder of a hooves of the purest thoroughbred horses on a legendary track … immortalized on the case-back of every Concord Saratoga watch case – a symbol of the progression over a quarter century of signature features moving with the times to produce perfect reinterpretations of the original design.

Once again, the Concord Saratoga Chronograph provides a true reflection of the spirit of its namesake – a distinguished race track located in Saratoga Springs, New York. In tribute to its thoroughbred origins, the Saratoga horses embossed on the case-back of the new full PVD Concord Saratoga Chronograph provide a proud tribute to Saratoga’s uniquely prestigious pedigree associating an enduring love of aristocratic horses and equally noble watchmaking aesthetics.