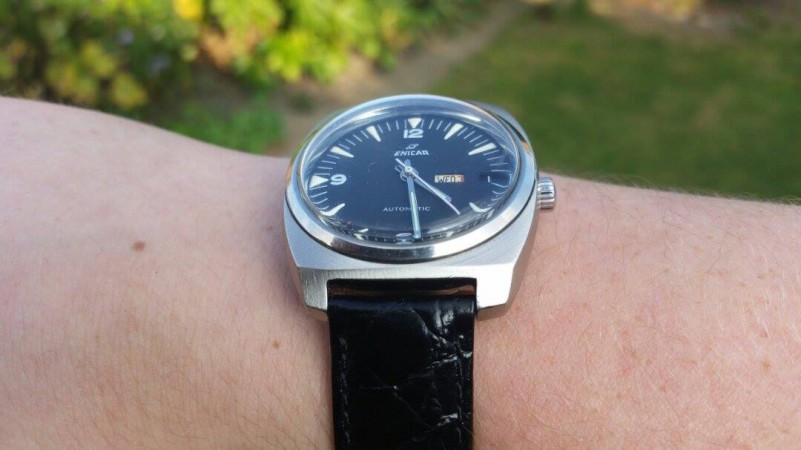 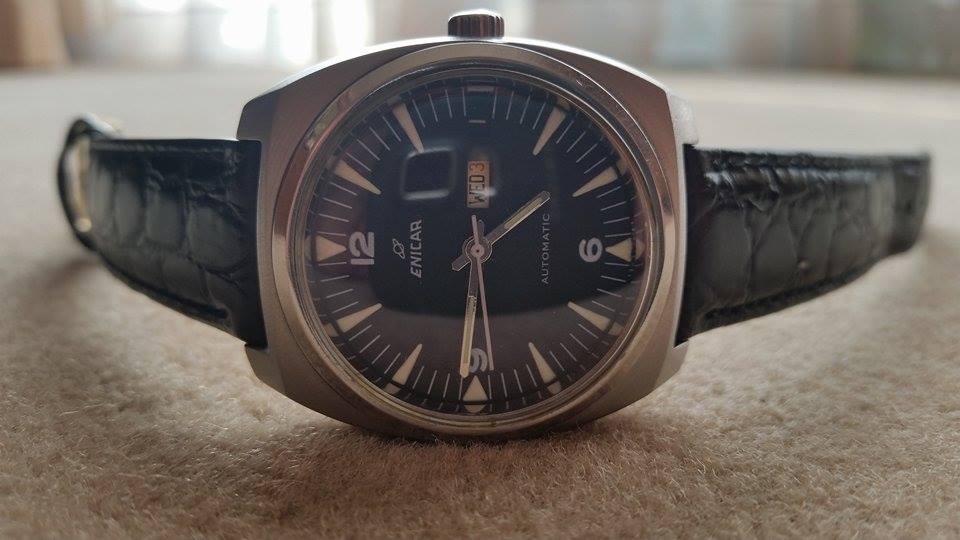 Well, it’s not brand new that’s for sure. We’re thinking sort of 70s right up until Enicar collapsed in the 80s. Here’s the interesting part, if you look up the Enicar company you’ll find they have a website and lots of new pieces. This is because it was bought by a Chinese investor and has spent many years reforming and making pieces for that particular market. However, because it’s recently enjoyed a renaissance of sorts in the Asian sector I’m almost certain we’ll see it returning to Europe and eventually the US markets at some point in the future, and I’m really excited by that prospect. 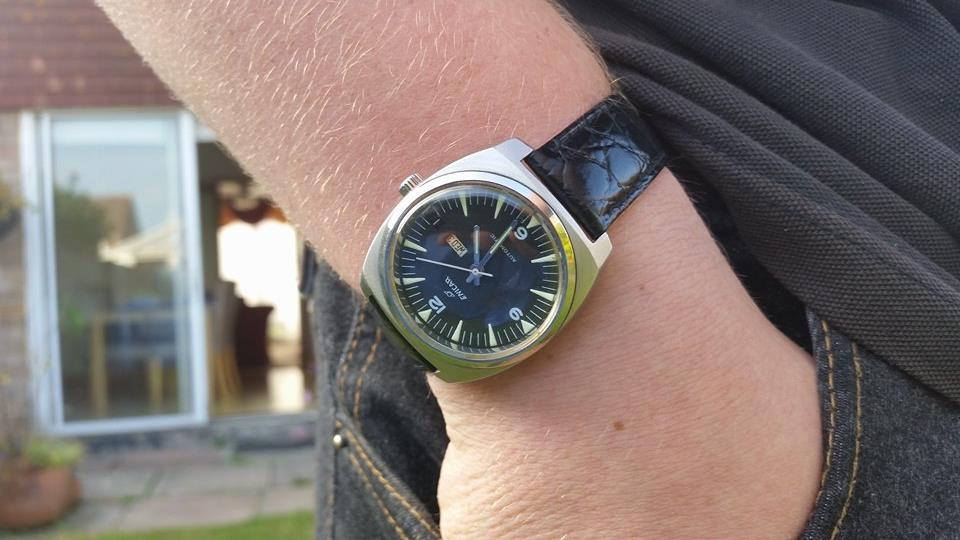 It’s important to remember that Enicar never was at the top of the chain. It never made haute horlogerie pieces. It never had the one of the top spots and lost it like Longines did. It’s always made pretty basic pieces. There have been mechanical alarms and GMTs about, even the subject of this article is a day date. Enicar’s watches were basic, cheap and reliable. It should also be known that these watches can be bought on Ebay. If they come from an Asian country (most likely India or Singapore) then they may have been what Enicar buffs call ‘butchered’. I will admit that this piece has indeed been ‘looked at’ in one of these countries, but that doesn’t bother me because it looks great. It seems they’ve actually done a good job with a nice and tidy dial and the movement looks to be pretty good as well. 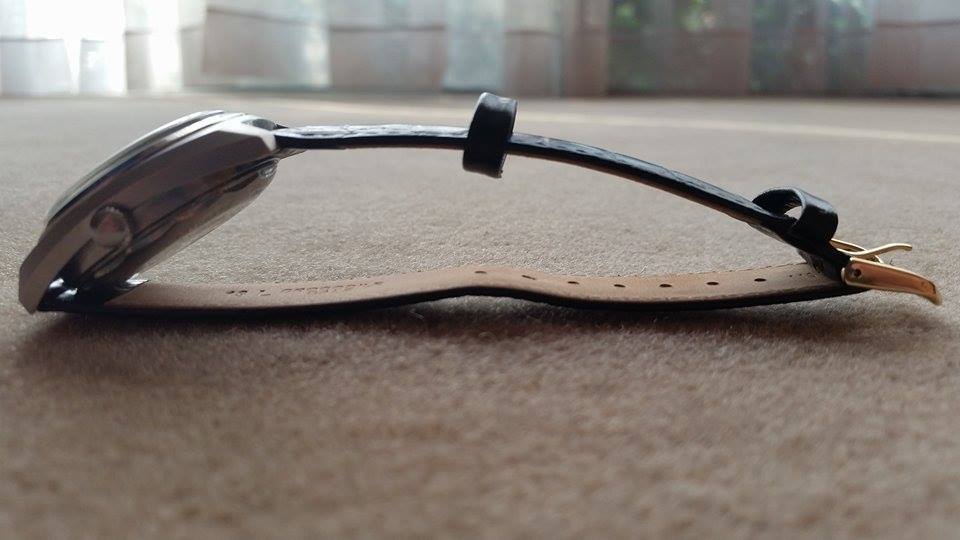 This particular example is an automatic day date dress style watch. It holds power for about 36 to 40 hours before needing a winding again. But even when I don’t wear it (and believe me, I don’t wear it much) I’ll still wind it every day. The dial itself is 35mm across, with the case adding an extra 2mm or so. 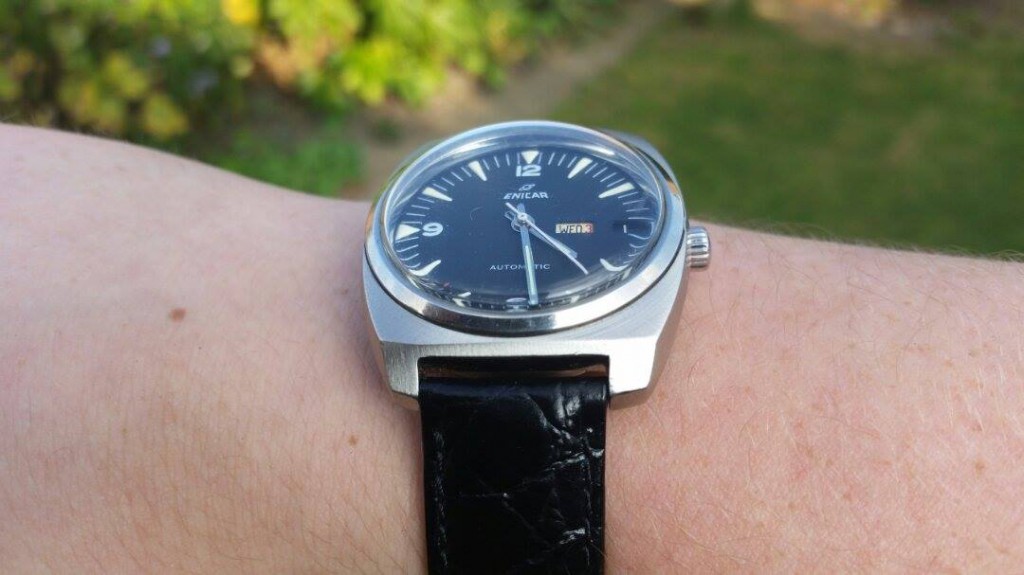 The black dial has triangular lume applied to it, the lume itself is really really bright and will easily hold it’s glow overnight. In fact, only my Omega Seamaster 300m glows brighter and it’s just come back from the factory for a new dial and hands. The hands are also luminous, however the seconds hand and the date windows aren’t. 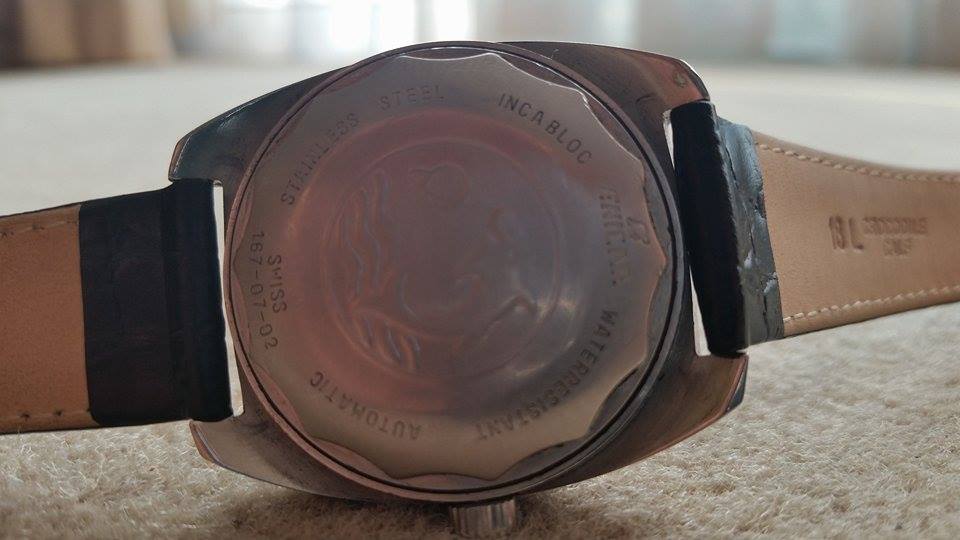 Turning over to the back of the watch we have Enicar’s standard case back which has the Enicar logo (Saturn) and a shark jumping out of the water embossed on the back. Above that is the Enicar name itself and logo again engraved onto it. Written around the outside there’s the words: Water Resistant (it once was, but no longer is), Automatic, Stainless Steel and Incabloc. There’s also the serial number on the back as well. Indeed this watch has the Incabloc system. A revolutionary way of protecting the most important and fragile parts of the watch from shocks and vibrations. When there were loads of other small brands like Enicar, Montine and Titoni Incabloc was immensely popular because it actually works. Even Patek Philippe has used the Incabloc system before. You’ll also find Incabloc in most vintage Enicars because they’re both from the same place in Switzerland, La Chaux de Fonds. The movement itself is copper coloured and has a simple winding rotor over the top which has a distinct pattern on it. I thought it was one of my fingerprints until I realised it wouldn’t come off. Oops! 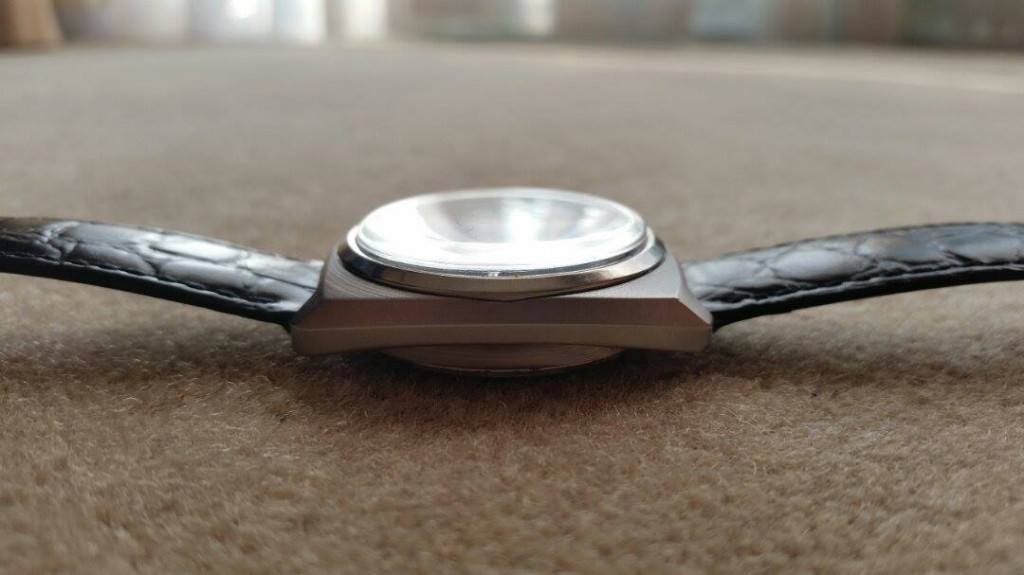 This watch is roughly 11mm thick, which isn’t too bad for an automatic piece from a long time ago. The crown is not a screw down but rather a simple pull out ordeal. The crystal itself is domed so it stands above the rest of the watch and all scratches were caused by me. I really like the seconds hand on this as it’s nice and simple and functional. It may also be because it reminds me of the needles on the instruments in a Citroën ZX, which was my first car. Either way, I really like it. However my favourite part of the dial is Enicar’s Saturn logo. Again like the seconds hand it’s simple but effective, that and Saturn is the most beautiful planet in to Solar System. 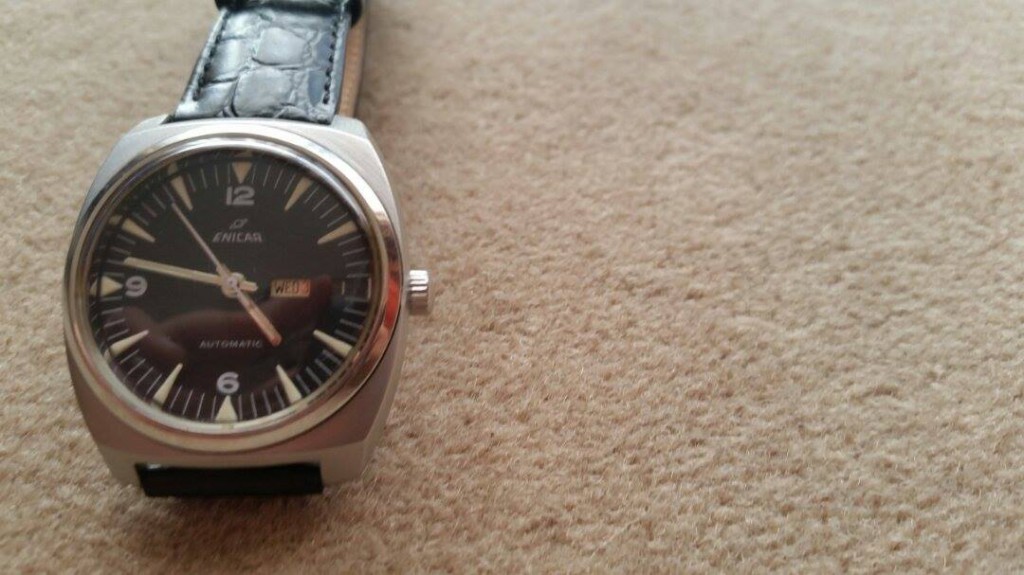 This watch cost me roughly £45 which isn’t bad in all honesty. You can find similar versions on Ebay and many other watch sales websites.

Enicar is on the up, and even if I stand alone, I can’t wait. For more info, please visit enicar.com