In this article I’ll be talking about grand complication watches. These watches represent everything the industry is about. They have over 200 years of knowledge passed down from one to another throughout history. They have class. They have a huge price tag and they have more bells and whistles than a church. These features are what give the watches their title as grand complication watches and their presence signifies the amount of workmanship. Within this article I’ll show you four watches from the upper echelons of the watch industry. The mechanical art forms created by the masters, so there’s no Jaeger LeCoultre here I’m afraid. I should also point out that these watches are usually available in gold or platinum depending on availability, however, gold is more sonorous which means it conducts sound better. We’ll focus on platinum and I’ll inform you where gold is available.

So, what makes a watch that may very well already be complex enough a grand complication? It depends on your viewpoint but it’s widely thought of that a grande complication watch should have a chronograph of some sort (be it a normal one, split seconds, flyback or anything in between), a calendar complication and a minute repeater. Patek Philippe disagrees.

Their 5074P-001 Grand Complication watch ‘only’ has two of these complications. It’s an automatic, platinum cased behemoth which also has a moonphase indicator. The perpetual calendar sub dials also have overlapping hands, so they do two things in one small circle. The only exception to this is the 6 O’Clock sub dial, where there’s a rotary date indicator and a moonphase window there too. Patek’s pride in this piece manifests itself in the minute repeater. Recognised as the most complicated thing possible to put on a timepiece, every minute repeater watch made by the Swiss house is personally tested by the CEO, Thierry Stern, before it’s boxed up for shipping. This watch also has a sapphire caseback so you can see the backplate of the movement and the solid gold micro-rotor. This watch is available with a black or white dial in either solid 18k gold or platinum however none of them are waterproof, only dust and humidity resistant. So don’t submerge it. 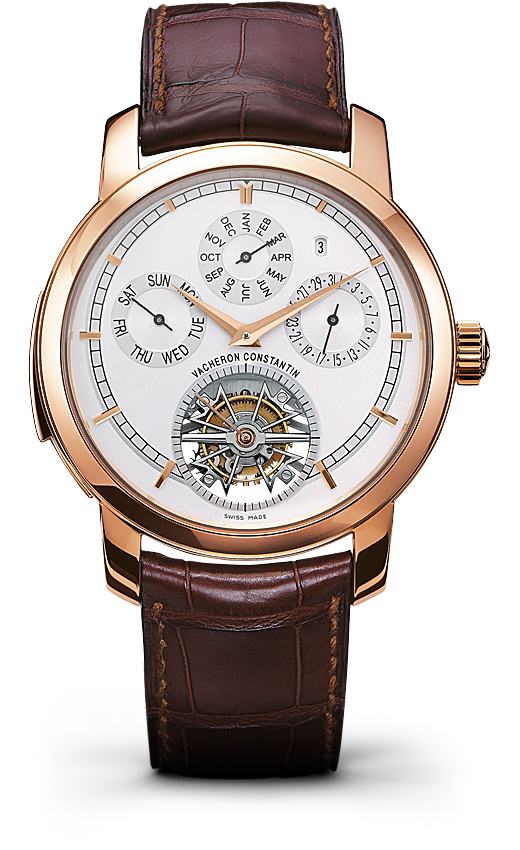 Vacheron Constantin is backing Patek Philippe up on this grand complication lacking a chronograph idea with their Traditionelle 2755. They don’t list it on their website as a grand complication watch, but it does all the things Patek’s does, so it should be, right? Added to this is the tourbillon at the 6 O’Clock position. It has two functions, first it helps make the watch more accurate (this is debated) and it also has a seconds hand on it. This is Vacheron’s one up on Patek, which lacks a tourbillon altogether, but the Vacheron is a manual wind and the Patek is automatic. You can still see the back of the Vacheron, though, and there’s that beautiful tourbillon on show all day long. The Vacheron is a perpetual calendar and that little window displays the year and leap year. The 5074P-001 has this as a rotary indicator instead of this more date window style. This watch is available in platinum with either a white or grey dial or 18k pink gold with a white dial.

Audemars Piguet interjects here with aptly named Jules Audemars Grand Complication. It seems the term bezelbulging that I coined a while ago was invented for two watches. One is the Blancpain Villeret, for it’s almost nonexistent bezel, and this watch for completely the opposite. Nevertheless however, this Grand Complication has the magic three additions on it. This has the time (obviously), a minute repeater, a perpetual calendar with a week indicator and a moonphase indicator and a split seconds chronograph. All of this and an automatic rotor fits into just a 14mm space. What’s more is all of the bridges are hand finished, the automatic rotor uses a ceramic ball bearing to decrease wear and the rotor can also be customised with your own design. All you need now is to be able to afford one. This watch comes in platinum, 18k pink gold, titanium and dark coloured titanium. If those aren’t enough, the dial is partially skeletonised and there’s also a sapphire caseback too.

A.Lange & Söhne are also going with the magic number and mix of complications with their first ever attempt at a grand complication watch. A.Lange & Söhne had never made a minute repeater as we know them in one of their watches before, but they had some experience with the Zeitwerk Striking Time range. This watch features a split seconds chronograph just like the Audemars Piguet, the difference is there’s also a milliseconds counter, this one works in groups of ten milliseconds to be precise. There’s also a perpetual calendar, a moonphase indicator and of course the minute repeater. This watch also features Lange’s super slim seconds hands, lancet hands for other features and their characteristic numerals. Because this watch is Lange’s first they haven’t quite perfected the art of miniaturisation yet, this watch is 50mm across and 20mm tall. It’s ok, though, this is only their beginning and they’ve said it themselves, it’s more of an experiment for them. This watch is limited to six pieces, all in pink gold and only one is made a year. It’s also easily the most expensive of the four at over $1.5m.

This isn’t a competition article. It’s more of an introduction to those of us who may not realise the exciting world of high complication watches even exists. These watches aren’t to be confused with watches like the Vacheron Constantin Tour de L’ille, Breguet Marie Antoinette and the Patek Philippe Henry Graves pocket watch as these are all classed as supercomplication watches and they really deserve their own article. I’ve also not included companies such as HYT and MB&F as while their watches are fantastically intricate, they focus more on telling the time in a way no one’s seen before.

As with all my articles this close to the holidays, I wish you all a fun, happy and safe holiday season.