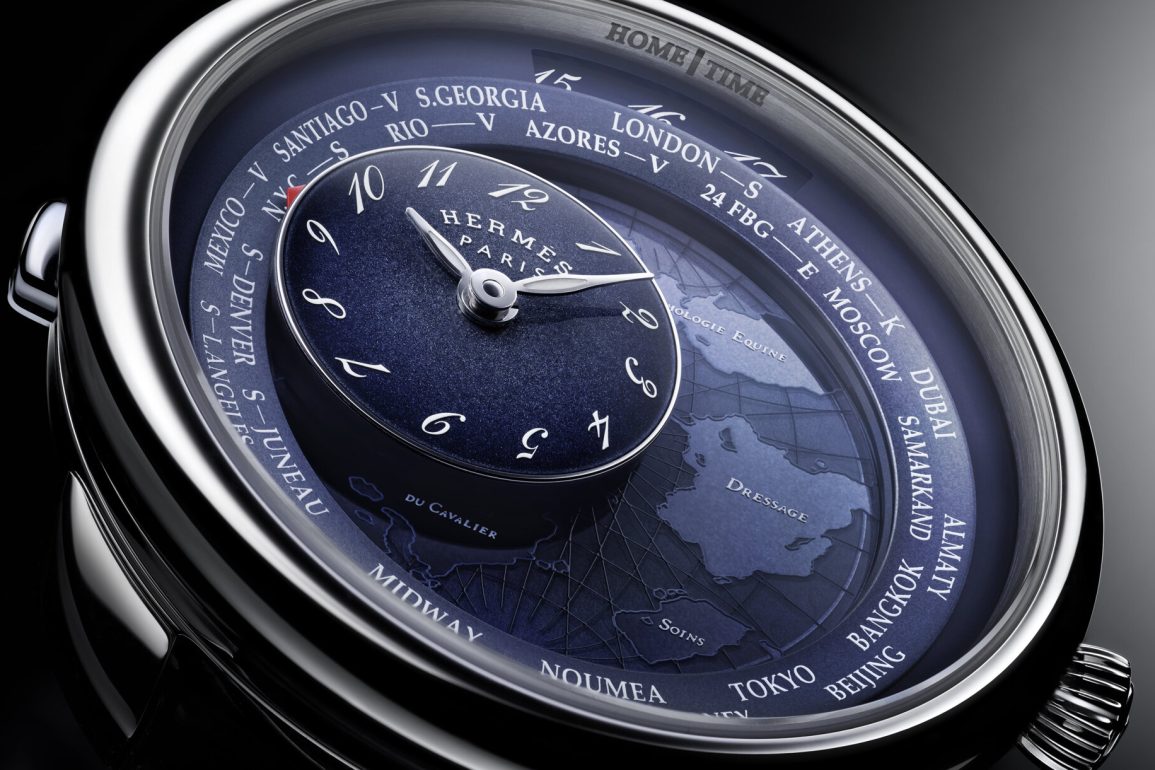 Almost straight out of a fantasy, the new Arceau models display two time zones in a novel and complex way.

Introduced in 1978, the Arceau design has become a major collection for Hermès with both time-only dials and unusual, complicated displays like the Arceau L’Heure De La Lune. The latest pair from Watches & Wonders brings a novel approach to relaying two time zones, complete with a fictitious map based on the “equestrian planet” from the Hermès Planisphère d’un monde équestre silk scarf. A wandering sub-dial works in the same vein as the moons on the L’Heure De La Lune (remaining oriented), but an unconventional arched window at 12 o’clock shows the home time in lieu of a second sub-dial. The case comes in two sizes and two metals – 41mm in platinum or 38mm in stainless steel. The bezel on the platinum model is black DLC titanium. There are unique arching lugs that are longer at the top than bottom, creating the signature asymmetry of the Arceau line. A signed crown at 3 o’clock is joined by a small pusher at 9 o’clock and both work together to set the dual time display. There are sapphire crystals front and back, and water resistance is limited to 30 meters. Calfskin or alligator straps are available for both models. 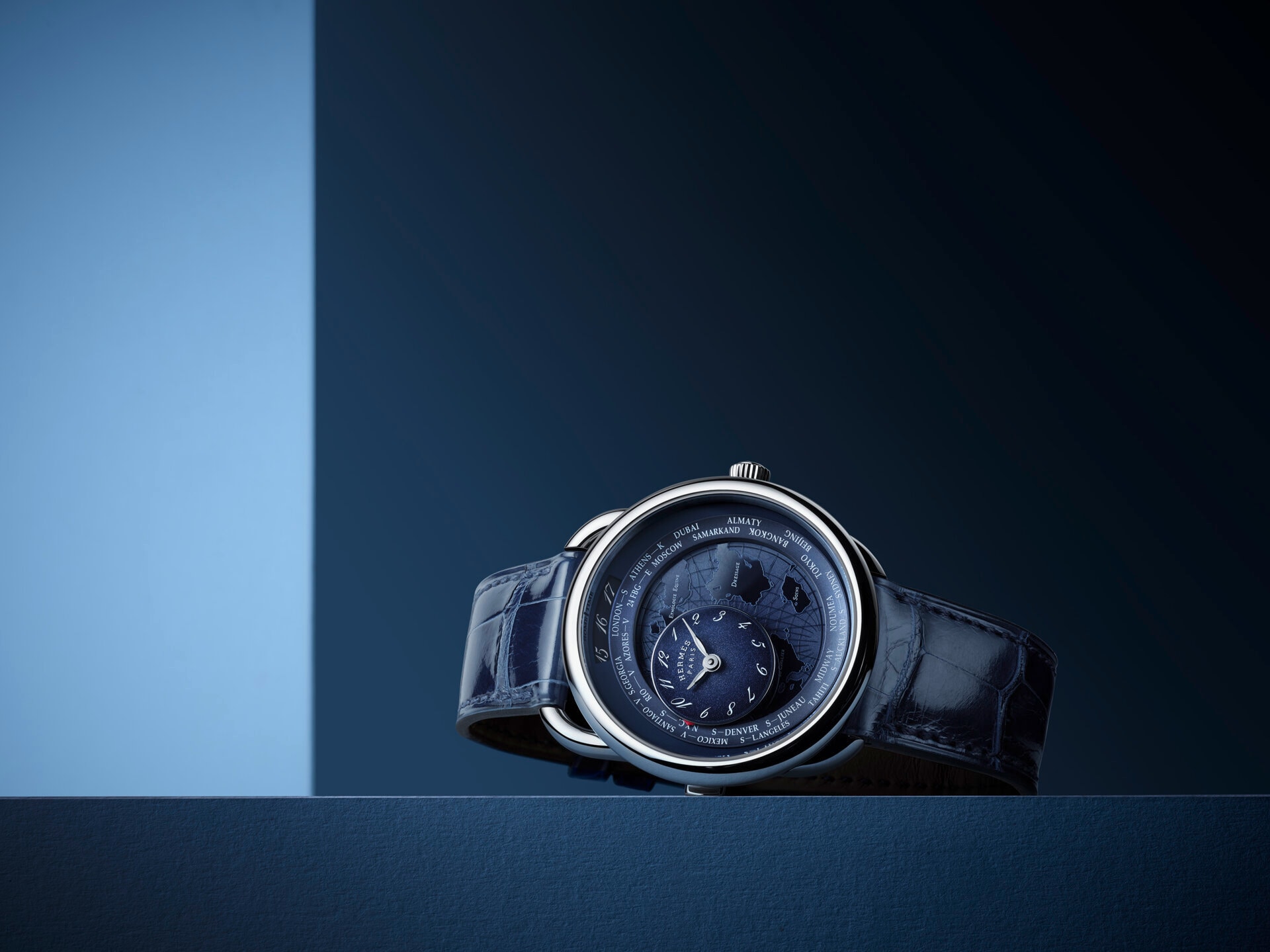 The dials have many familiar Hermès elements, but also a very new aesthetic. The main dial is off-center and pushed to the bottom, leaving a bit of space at the top for a window displaying the home time via a 24-hour ring. Local time is in a sub-dial within the main dial that rotates around an outer ring of 24 world cities. Underneath is the “equestrian planet” map made via laser engraving and lacquer. The color palette is blue on the steel model and grey on the platinum model with many subtle shades. As the satellite dial rotates around the main dial and cities, it maintains an upright orientation as does its red city pointer. The hour hand adjusts itself as the dial moves to the correct city and time zone. How does it work? Set both times to match by using the 9 o’clock pusher to move the sub-dial to the home time zone, then pull the crown to the third position and set the local time on the sub-dial. Now, push the crown to the second position and set the home time in the top window. When you travel, simply use the 9 o’clock pusher to move the sub-dial to the proper city/time zone, which will automatically adjust the hour hand accordingly. The complex engine making this possible is the Hermès caliber H1837 automatic (made by Vaucher) with a specialized travel time module produced by Chronode in Le Locle. It beats at 4Hz with a 40-hour power reserve. It’s decorated with a series of machined H letters on the plates and rotor, which certainly looks cool, but is not at the level of hand-finishing by some of the major industry players. As a side note, Hermes has a 25% stake in Vaucher and the movement is exclusive to the brand. 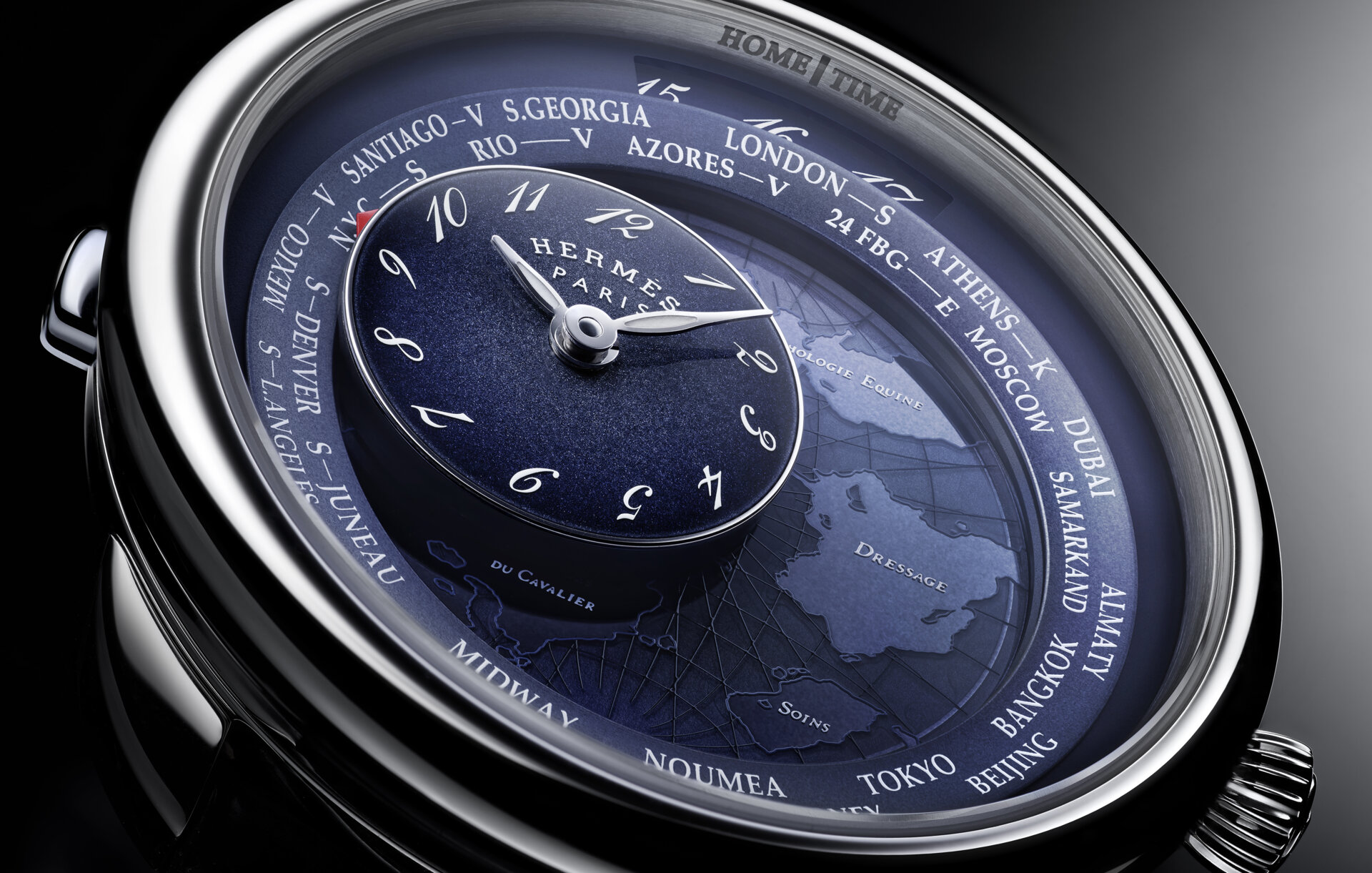