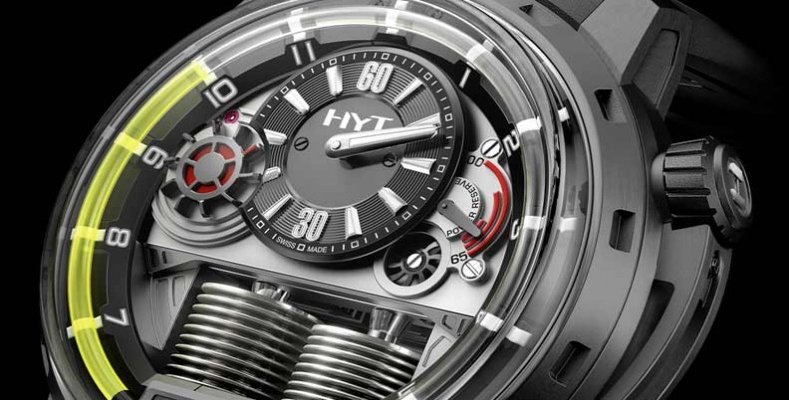 HYT – Since The Dawn of time

Since the dawn of time, man has been trying to find a way to tell and measure the time. We’ve been through all the phases: from solar and mechanical clocks, to quartz, which has hurt the industry (well, it depends what you think of quartz watches. We will have the opportunity to speak about that later), passing even by the water … the water clock (Clepsydra), operating on the principle of a regular flow of water over time.

Today, we no longer have the problem of quantifying the time, and yet there are still so many people that are always late. Nevertheless, every day watchmakers are seeking new ways to read the time, from the most conventional manner to the more atypical. For example, AOSWatches and “The Wheels of Time” or Christophe Claret and the “X-TREM-1” (to name a few). 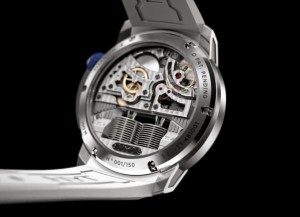 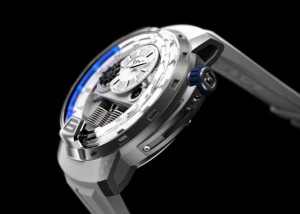 Like a trip back in time, HYT Watches use a liquid. Here’s a little story … A year before its launch in 2012, a young designer contacted me because he had a crazy project (and I like that!). He wanted to launch a watch which would give time thanks to a liquid (something far away from HYT). It was a project that was just in the state of design with no financial background, and especially without technical study. I didn’t pursue the concept further, and indeed it has not led to anything.

That’s why I was pleasantly surprised at the launch of HYT Watches. They are everything I love in watchmaking: a concentration of innovation, completely atypical, and that had shaken the whole industry in the space of a few days. A world first, which combined a hydraulic part with a mechanical part. Being as passionate as we are, we eagerly waited to learn more about the new concept of Vincent Perriard at Baselworld 2012.

To be clear, it’s crazy and everyone knows it. In general, if there is a tiny drop of water inside of your watch case, you will need to repair it and therefore have to spend a lot of money. For HYT, on the contrary, the liquid is an integral part of the clock’s ability to read time.

Let’s return for two seconds to the Clepsydra, which essentially has the same goal – give the time or at least measure short periods with water.

A Clepsydra works on the same principle as the hourglass, with the difference being that it is the flow of a quantity of water that sets the elapsed time.

The problem with a water clock is that as it becomes empty, the flux rate of the flow becomes lower. Indeed, this follows a fairly simple phenomenon.

The pressure generated by a height of water decreases at the same time as the container empties. The amount of runoff for the same duration is different when the bowl is full (the first Clepsydras were made with bowls), and when it’s almost empty, which raises issues regarding the accuracy.

This problem in the constant flow is due to the fact that the water pressure at the bottom of the bowl decreases, the latter being directly linked to the height of overlying water. To maintain the same pressure, “Ctésibios” (who was a Greek engineer, born in the third century before JC), had the idea of keeping the water level constant. 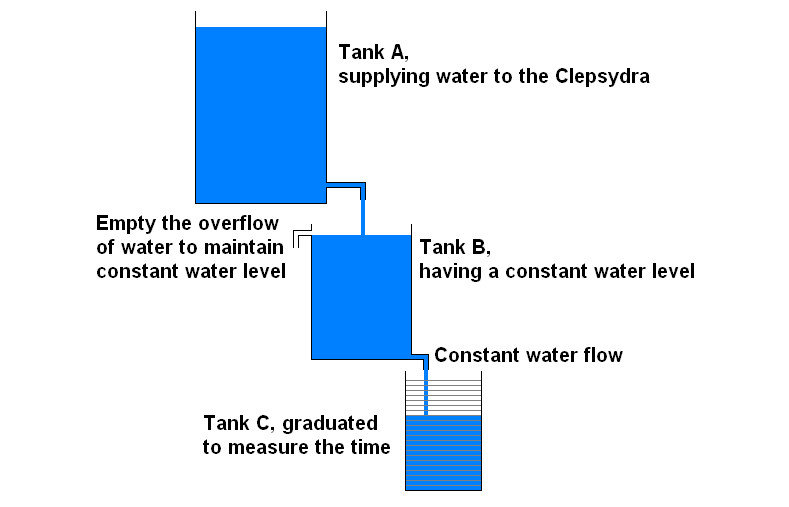 For this he used three tanks (A, B and C). Tank A contains a large amount of water, and its goal is to always feed tank B with water. The level of B is maintained thanks to a hole near the top, which is responsible for emptying the excess of water (this is a valve). The water in B flows normally through a small hole at its base. The flow through this hole is constant; because the water level in B doesn’t vary, the output pressure therefore also remains constant. The water in B, flowing through the hole in the base, goes into tank C, which is graduated. By observing the fill level of C, we can determine the elapsed amount of time.

In short, all there is to say is that using a liquid to tell the time is an extraordinary feat. So, we understand that the principle of the fluid module, which is the base of the HYT timepiece, required an incredible number of hours of technical studies.