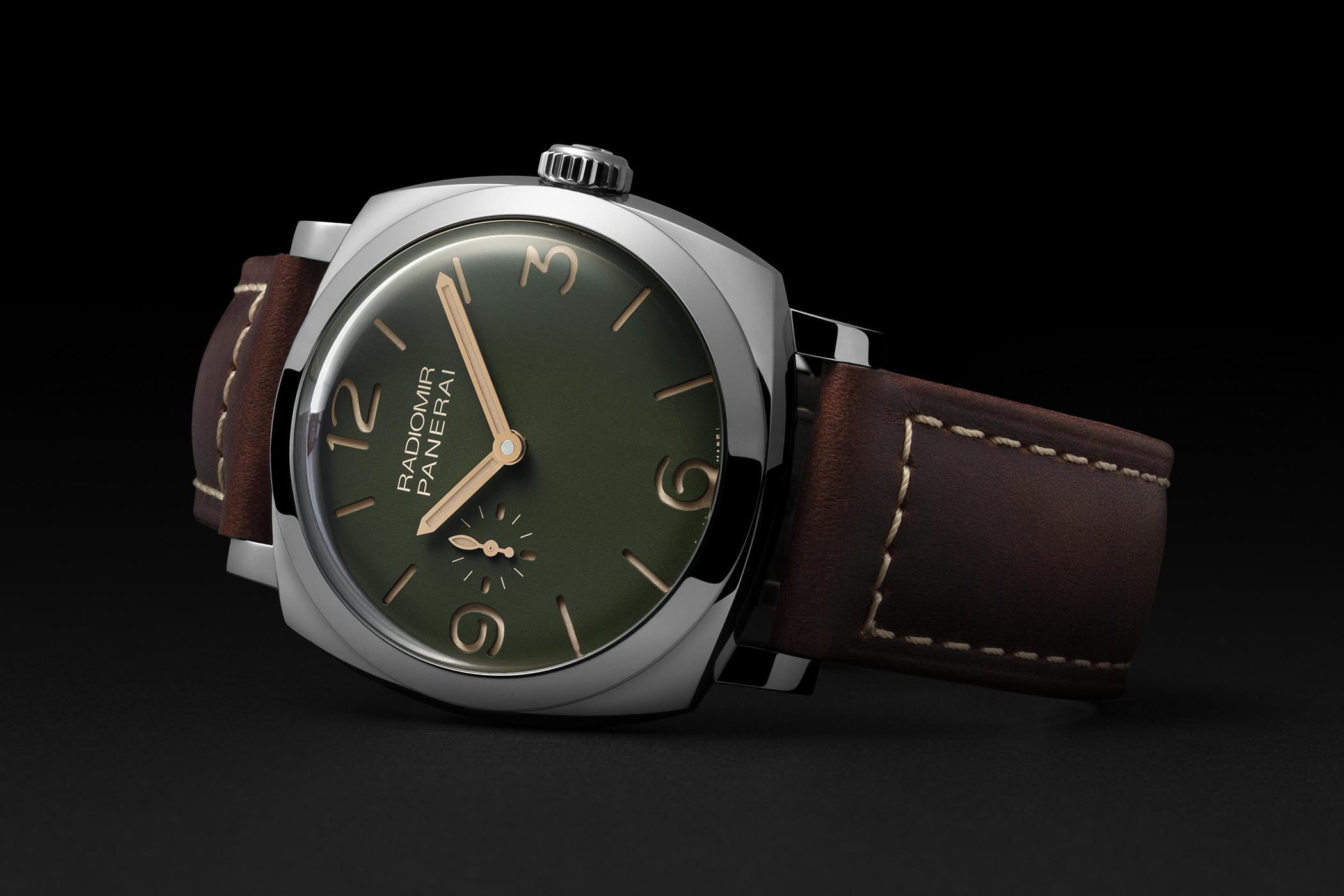 Despite being a younger brand than most others on the watchmaking block, Panerai has nevertheless built a reputation on solid watches designed for and used by professional mariners, more specifically, the military. The Royal Italian Navy created exclusive watches for the Navy’s divers to use which would allow them to view the time underwater and during night operations. These watches were called Radiomir watches thanks to their use of Radiomir paint on the dial, a radioactive substance which glowed in the dark. You can buy Radiomir watches from Panerai these days, but there is no radioactive material in them. The Radiomir 1940 collection represents their most basic and pure design, and now they have some new dial colours. 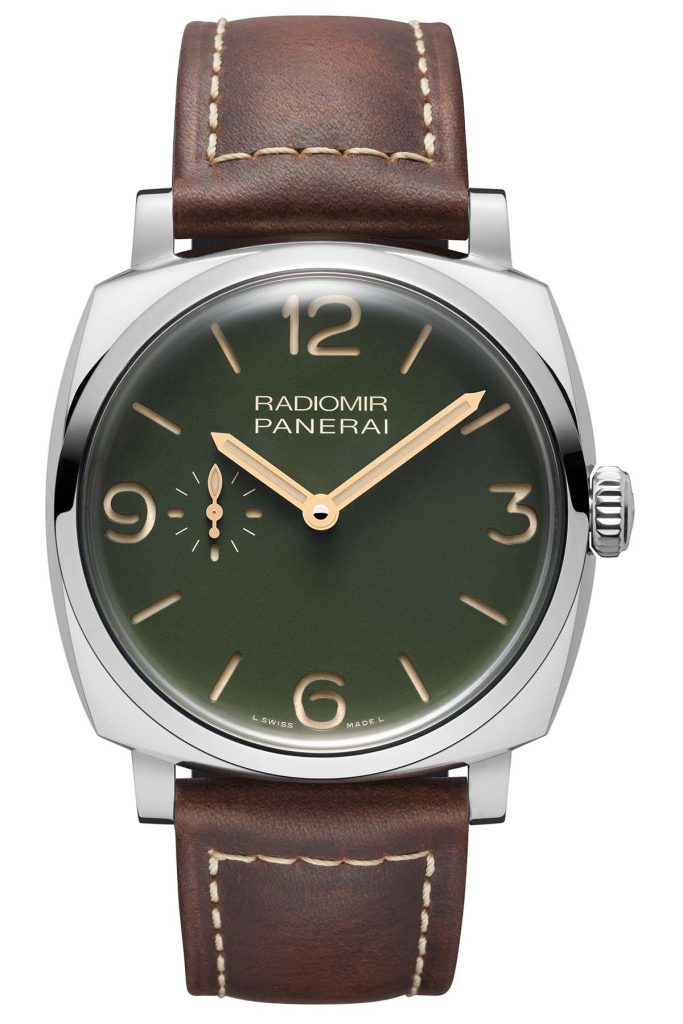 This most simple version of the new Panerai watches wears its militaristic green colouration with pride. The 45mm stainless steel case features polishing all around the cushion shape, but not the wire lugs of the most traditional models. The hands are gold plated and have lume in them to help them glow in the dak. The dial uses the classic sandwich construction to create a depth to the indices that is particularly prevalent on the sub-seconds dial. The Panerai P.4000 calibre uses a micro-rotor to keep the bulk down; it also has a three-day power reserve for extra usability. The price is €9900. 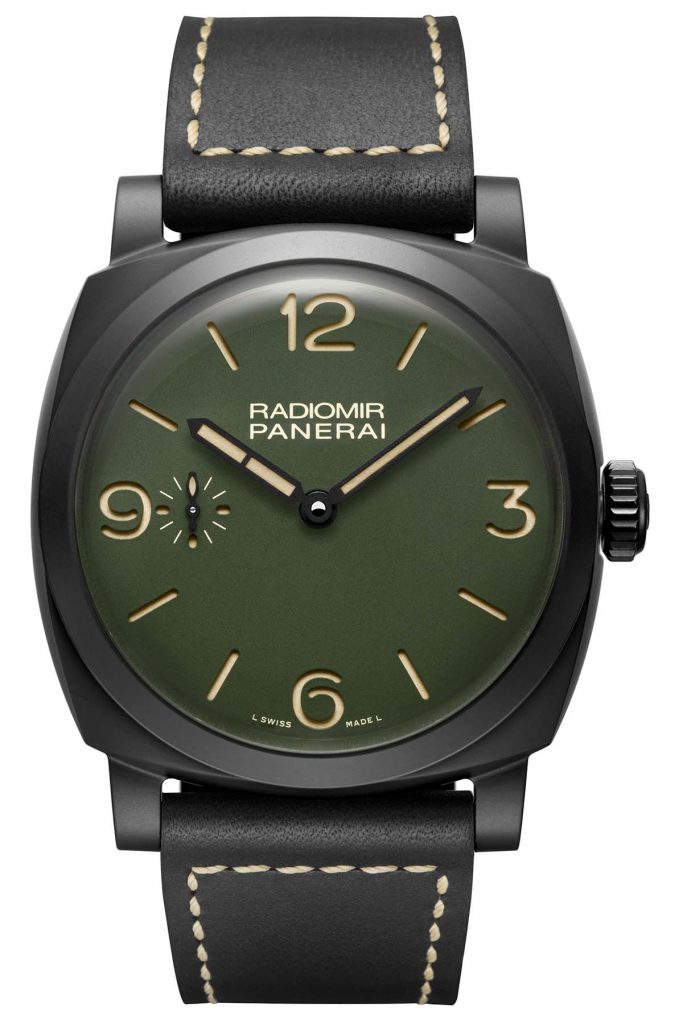 The PAM00995’s bigger, meaner brother is the new PAM00997. Featuring a bold case of 48mm in diameter, the most noticeable part of this watch is undoubtedly the ceramic case. Panerai has a materials research lab which is second to none (I’ve seen it myself), which allows them to make creations as unique as this. Inside this ceramic beast is the in-house made Panerai calibre P.3000, which is notable for its large baseplates, similar to those from the town of Glashütte. This manual winding movement also has a three-day power reserve but is quite slim by Panerai standards. Just like the PAM00995, this one is also served up on a “Ponte Vecchio” calf leather strap. The price of this one is €12,900. 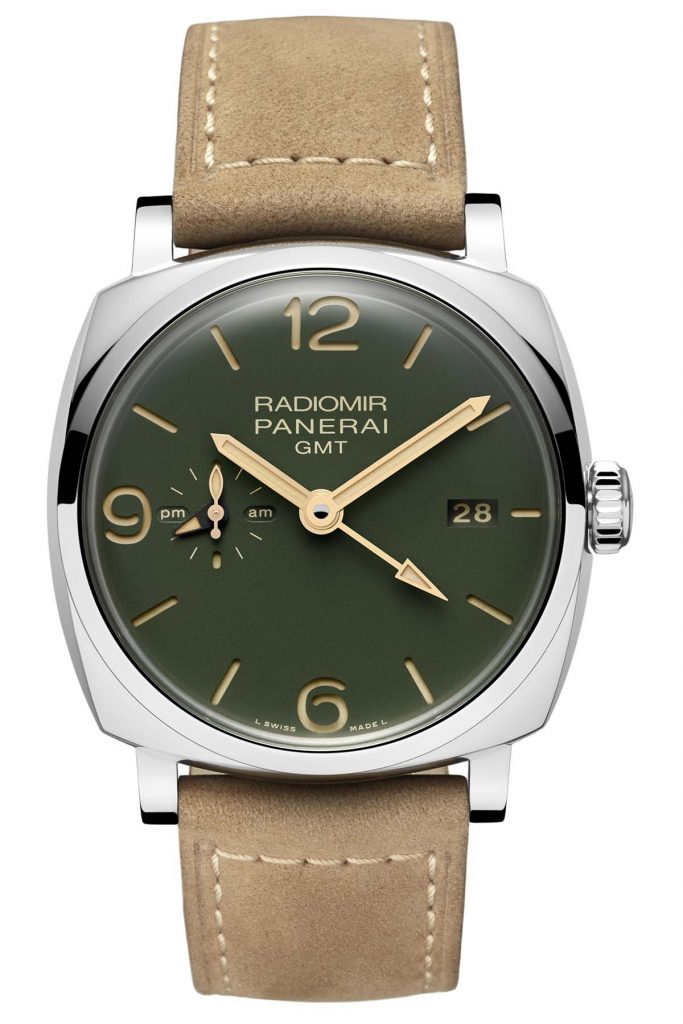 The PAM00998 brings to it a slightly more complicated watch but with a similarly unfussy dial, a Panerai hallmark. The PAM00998 brings to the table the same clean and green dial as the PAM00995, but if you look a little closer, you’ll see an extra lumed hand. That is a 24 hour hand, making the PAM00998 a GMT timer. Inside that sublime polished cushion case is the P.4001 calibre, which is based on the P.4000 calibre. It brings not only a GMT hand to the table, but a power reserve of three days that is visible through the caseback on a little dial. This watch is still 45mm in diameter, like the PAM00995, but the case is thicker at 13.95mm compared to the former’s 12.2mm thickness. The price is €11,700. 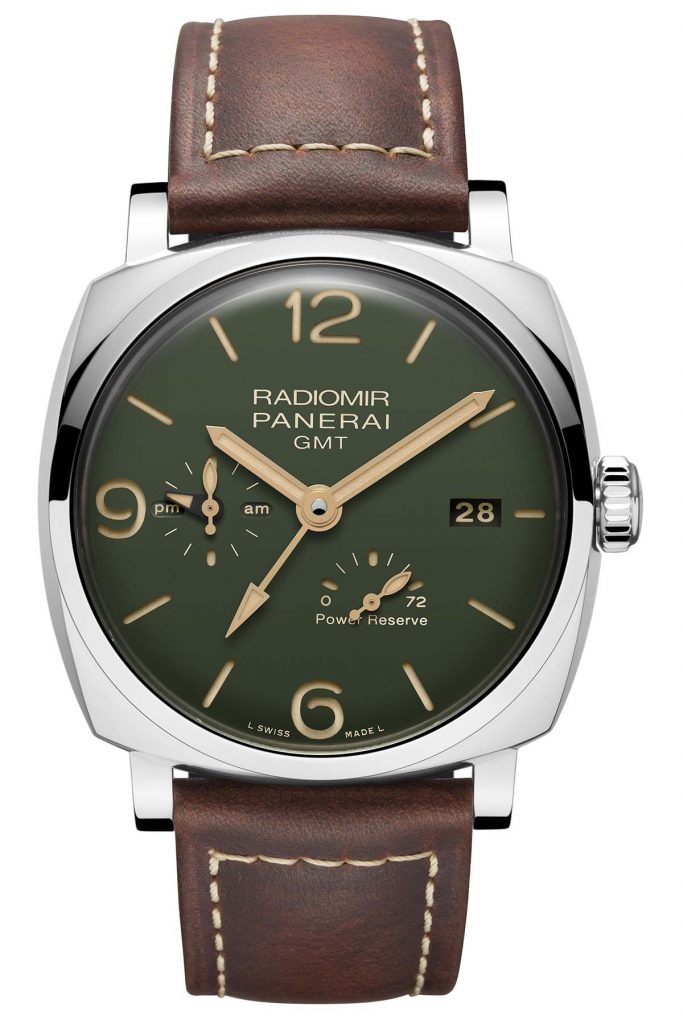 Finally, we come to the most complicated of the bunch, the PAM00999. This watch features both a power reserve on the dial and the GMT display of the previous version, as well as the date too. However, the layout changes slightly for this one, though the GMT stays where it is the seconds subdial gains another hand, which in this case indicates whether it’s AM or PM. The P.4002 calibre keeps hold of the micro-rotor layout with a sturdy bridge for the balance and is still suitable for 72 hours of run time. And, of course, the movement is visible through the back. This one will cost €11,900 and has the same dimensions as the PAM00998.

All of these watches are linked by their classic green dials which ooze military heritage. But, they’re also all linked by a 100m water resistance rating, which shows Panerai is still committed to quality.