Introducing New Watches From Breguet For 2020 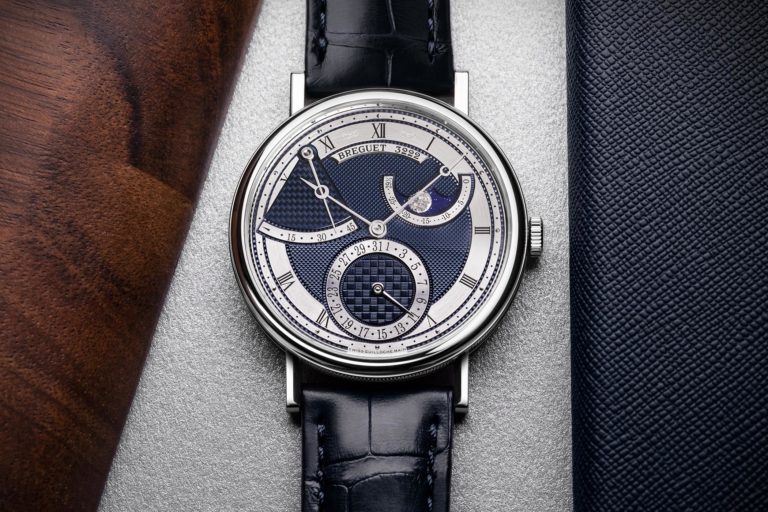 With the microscopic elephant in the room putting most of the watch world on hold for 2020, brands are left with no alternative but to launch their collections online. The Swatch Group had initially planned an event in Zürich called Time to Move, which was going to be a press conference for their upper echelon brands (Omega and above). Sitting at the summit of the Swatch pyramid of brands is Breguet, which has now released three new models for this year. With Breguet being my favourite watchmaker, I was ecstatic when I was handed this article. 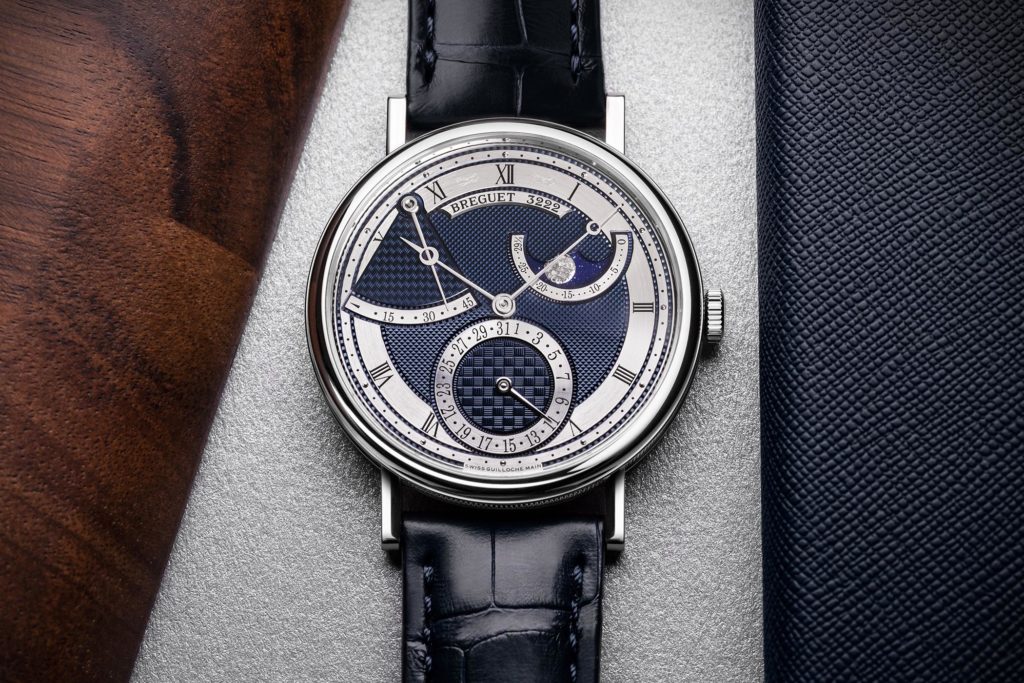 My favourite model of the new lineup is the Classique 7137, which takes the inspiration for its dial from Abraham Louis Breguet’s Perpétuelle No.5 pocket watch. In this case, the word perpétuelle didn’t indicate the presence of a perpetual calendar, but rather, Breguet’s automatic winding system which used a platinum arm to wind the watch (at this point, the automatic rotors we see today didn’t exist, check out Moritz Grossmann’s Hamatic watch to get an idea of Breguet’s automatic winding system). 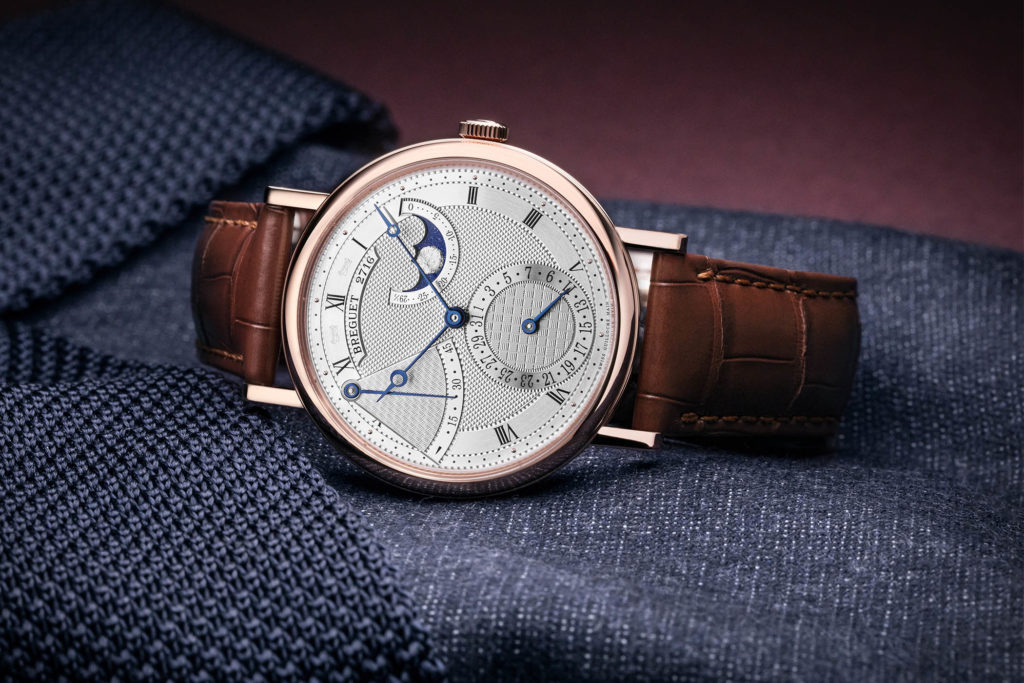 The dial of the 7137 follows the design of the No.5 pocket watch’s dial, albeit with a rotated power reserve. With elegant guilloché created by a skilled artisan with a rose lathe, Breguet dials are unmatched in their engraving. While some, like Kari Voutilainen with his Vingt-8 or A.Lange & Söhne with their Handwerkskunst, get close, I don’t think anyone in the industry today matches Breguet in the guilloché dial department, and there are four different patterns on display on the 7137’s dial, can you name them all? 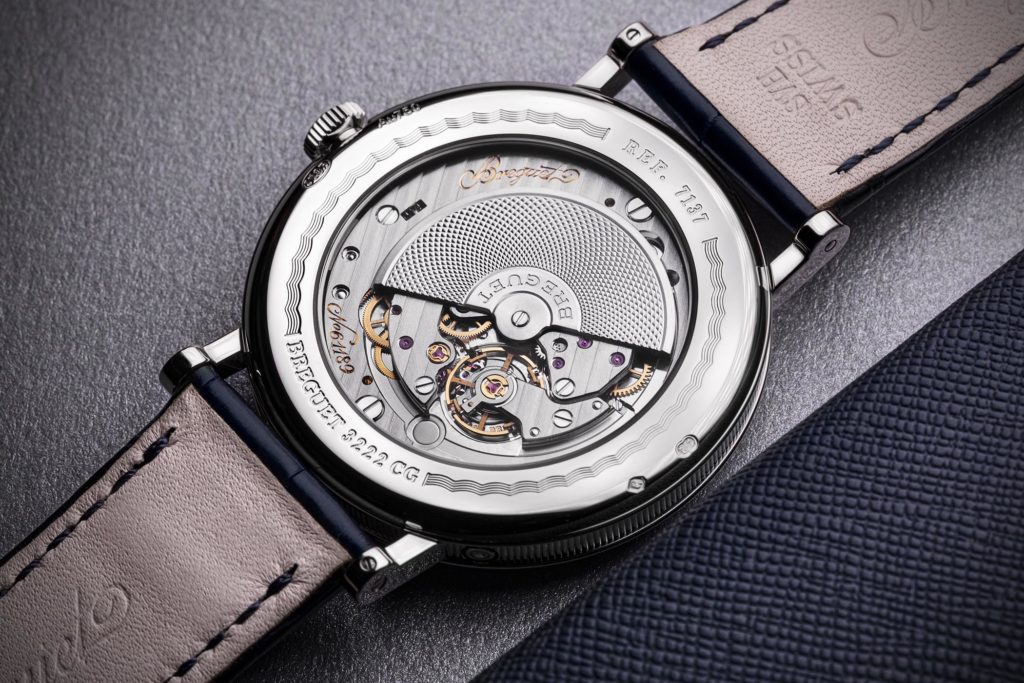 The watch features a power reserve, a rotary date and a moonphase which lacks Breguet’s distinctive face engraving, instead opting for a more lifelike emboss. With the blue dial & white gold version that moonphase is particularly striking, though I would like to have seen the face appear on the rose gold version to differentiate the models a little further. Inside the watch is an automatic calibre 502.3, which has a silicone balance spring and lever, a 3Hz beat rate and a 45-hour power reserve. Inside the svelte 39mm x 8.65mm case, this watch is incredibly attractive, but it costs €35,300. 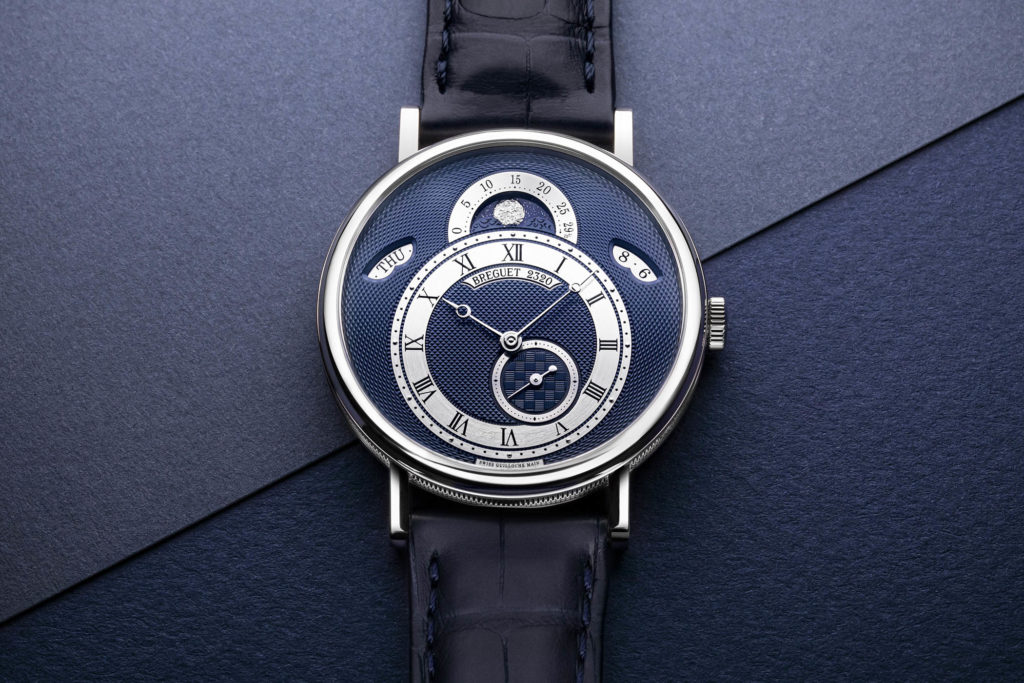 The 7337 is based on Breguet’s pocket watch No.3833, are you starting to see the connection between Breguet’s current lineup? Most of them take their designs from the plethora created by the brand’s namesake, Abraham Louis Breguet, when he was alive in the 18th and early 19th centuries. Breguet’s No.3833 had a dial which spread out the indications as the 7337 does, but the pocket watch was also a quarter repeater. This one is not, but it would be intriguing to see Breguet make a limited edition version which is. 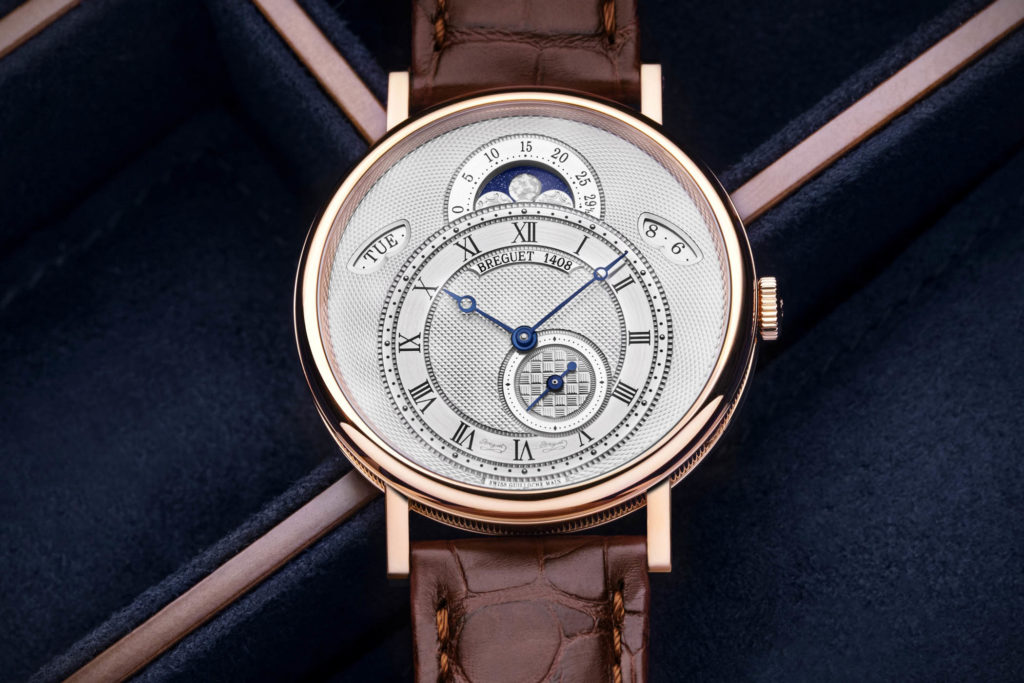 This design isn’t new to the lineup, Breguet has been making six variations with a white dial and three choices of metal for a few years, with the other three variants having metal bracelets. The new watch features the updated moonphase that we saw on the 7137, which is made to resemble the moon a little more accurately than other Breguets which typically have a big face engraved onto them. The only other dial changes include the guilloché patterns, specifically inside the time dial and the sub-seconds. It appears that these two new watches will join the current lineup, rather than phase them out. 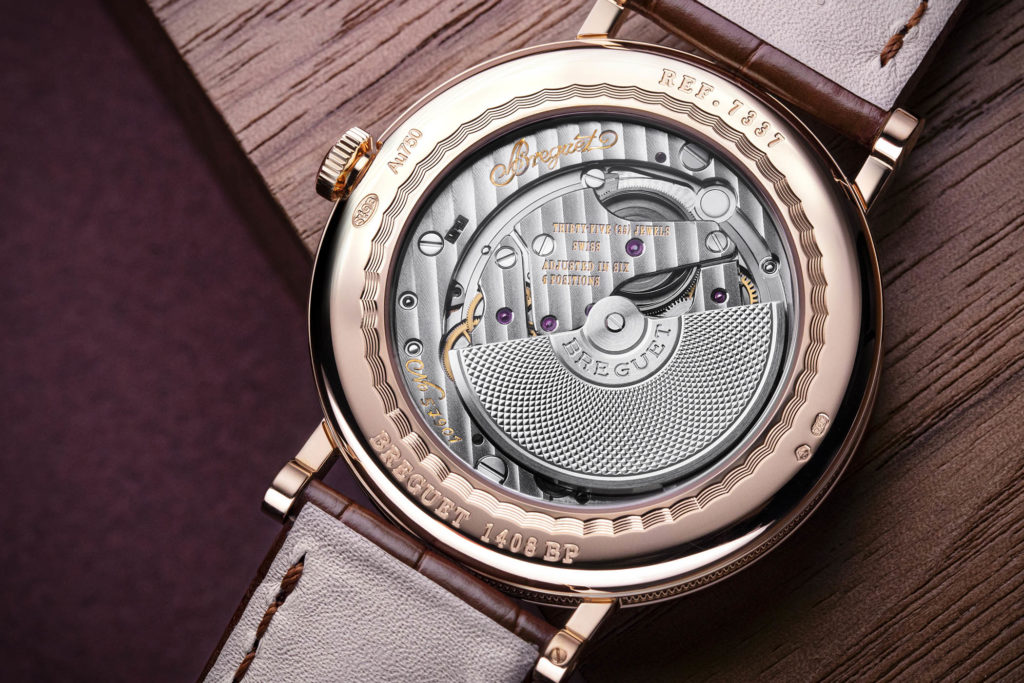 Inside the watch is the calibre 502.3 QSEI, which is similar to the 502.3 calibre in the 7137 above except for the added indications. Alongside the date and moonphase, there’s also a day of the week indicator to balance the dial out. The movement has a 3Hz beat rate and 45-hour power reserve, an off-centred rotor with excellent guilloché and high quality finishing all round. The price for the 7337 is yet to be confirmed, but expect to pay around €40,000, but there may be some discrepancy for the case material. 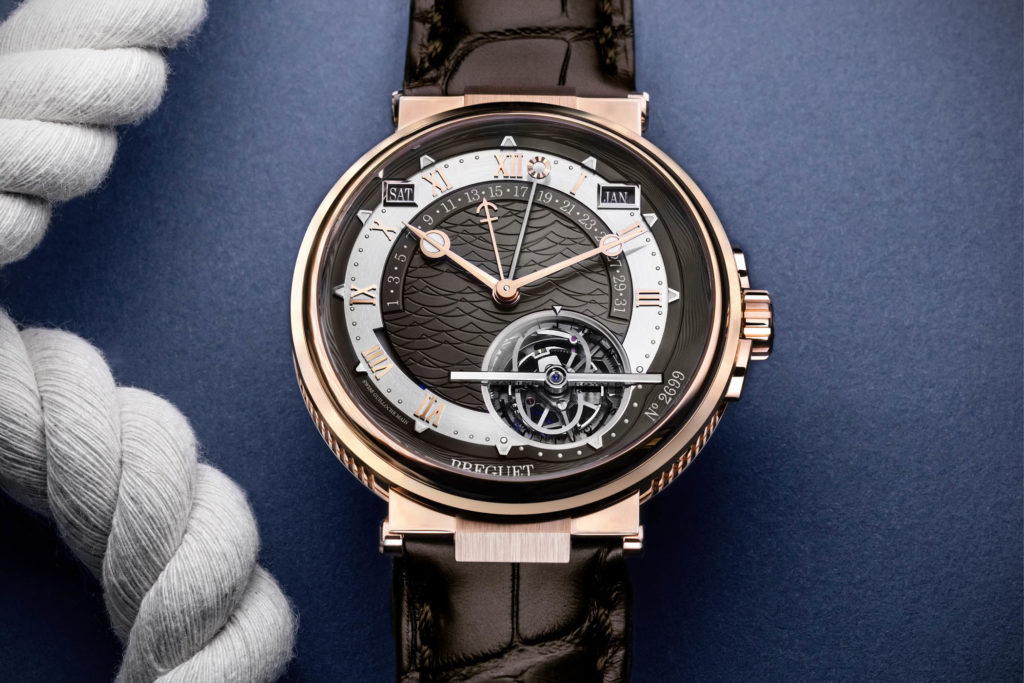 Like the previous pieces, the new Équation Marchante adds to an existing collection, a really bleddy good collection too. Having worn the blue platinum version for a bit, I can attest to the quality of this watch (and also the mass, it’s a heavy beast). A watch of this calibre is what Breguet needs to stand out in the world of hyped brands and independents. Occasionally they do something that challenges the independent brands out there, something like the Tradition 7047 tourbillon for instance. 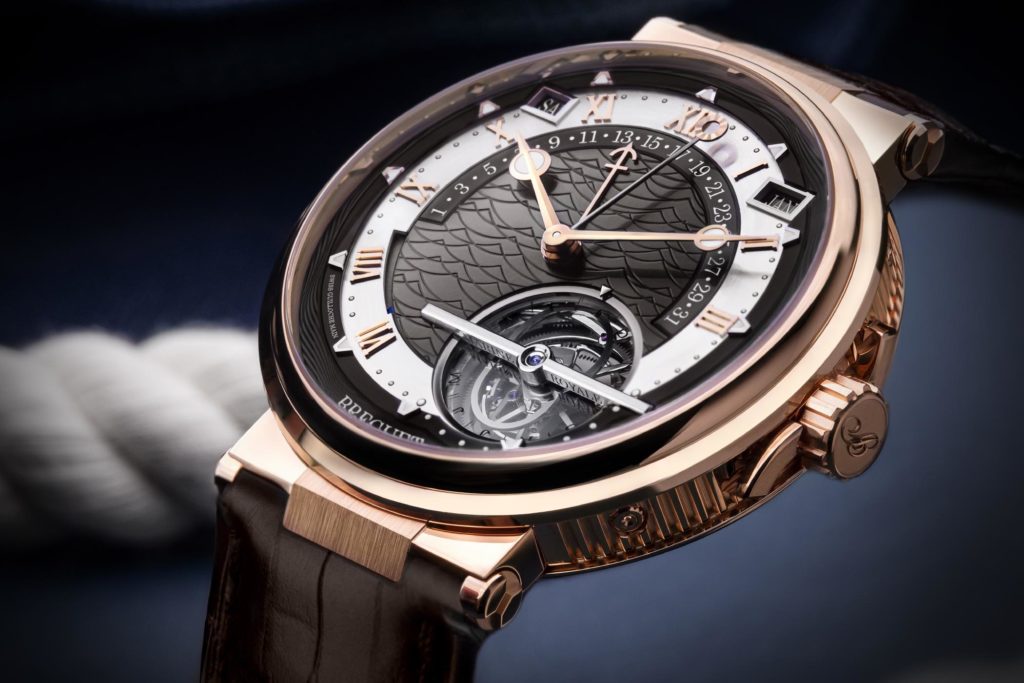 The Équation Marchante has a tourbillon in it, as well. It has a perpetual calendar, power reserve and an equation of time display, too. The equation of time (I’m calling it the EOT now) displays the difference between mean solar time and true solar time. While we think of each day as having 24 hours, that is not technically true as the Earth’s orbit is elliptical rather than circular. Only four days out of the year have precisely 24 hours in them. They are the 15th of April, the 14th of June, the 1st of September and the 24th of December. Every other day is either slightly longer or shorter, with a difference of up to 15 minutes either way. The Équation Marchante displays this time difference with a second minutes hand, tipped with a fluted circle. Depending on whether the true solar time (the actual time according to the position of the Earth) is ahead or behind mean solar time (the time as humans measure it), that second minutes hand will either be ahead or behind the normal minute hand, as governed by the kidney-shaped cam sitting atop the tourbillon. It’s a hard notion to get your head around. Luckily, once you get some practice, you should be able to show it off to your friends at the pub with ease.

The movement has a nautical theme to it to add some whimsy to this timepiece. The engraving on it is of the Royal Louis, built in 1758 she ended her voyage in a dry dock, being dismantled after some damage there was irreparable, beats being sunk by the British I guess. Orbiting the Louis is a peripheral rotor to keep the calibre 581DPE ticking for up to 80 hours. There’s also silicone technology onboard, and of course, the EOT and perpetual calendar functions added. Strip away those extras, and you get what is essentially the 581DR calibre used in Breguet’s stand-out ultra-thin tourbillon models.

As you can imagine, a big solid lump of rose gold with over 580 parts inside it and incredible engraving is going to be expensive, and at €209,500 it’s hardly bargain of the century. Still, I know that some other top tier brands out there would charge way more for this much work.