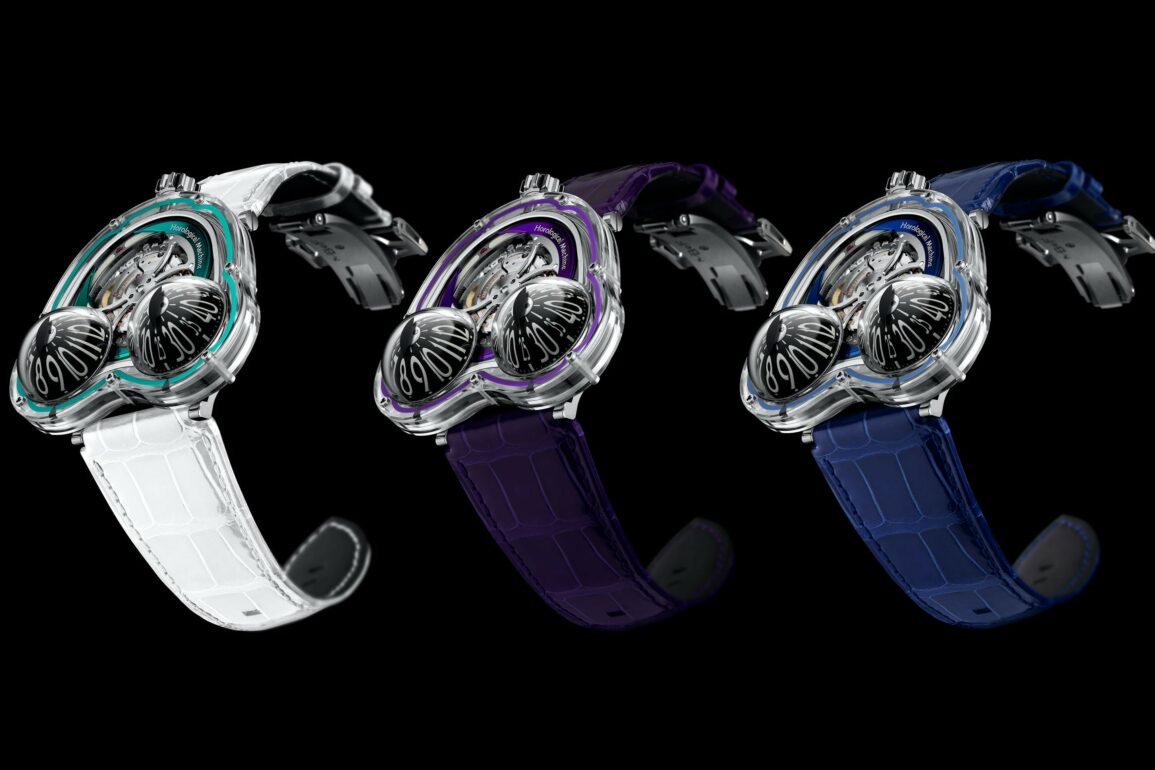 Did you know it’s been ten years since MB&F made the very first watch named Horological Machine No.3? Did you also know that I’m not sure which way up you’re supposed to wear it? Well, you know now, that’s for sure! The Horological Machine No.3 (HM3 for short) was nicknamed the ‘Frog’ because of its bulbous protruding time domes which mean you don’t need to turn your wrist as much to tell the time, in the same way a frog can see in multiple directions without having to turn its head. 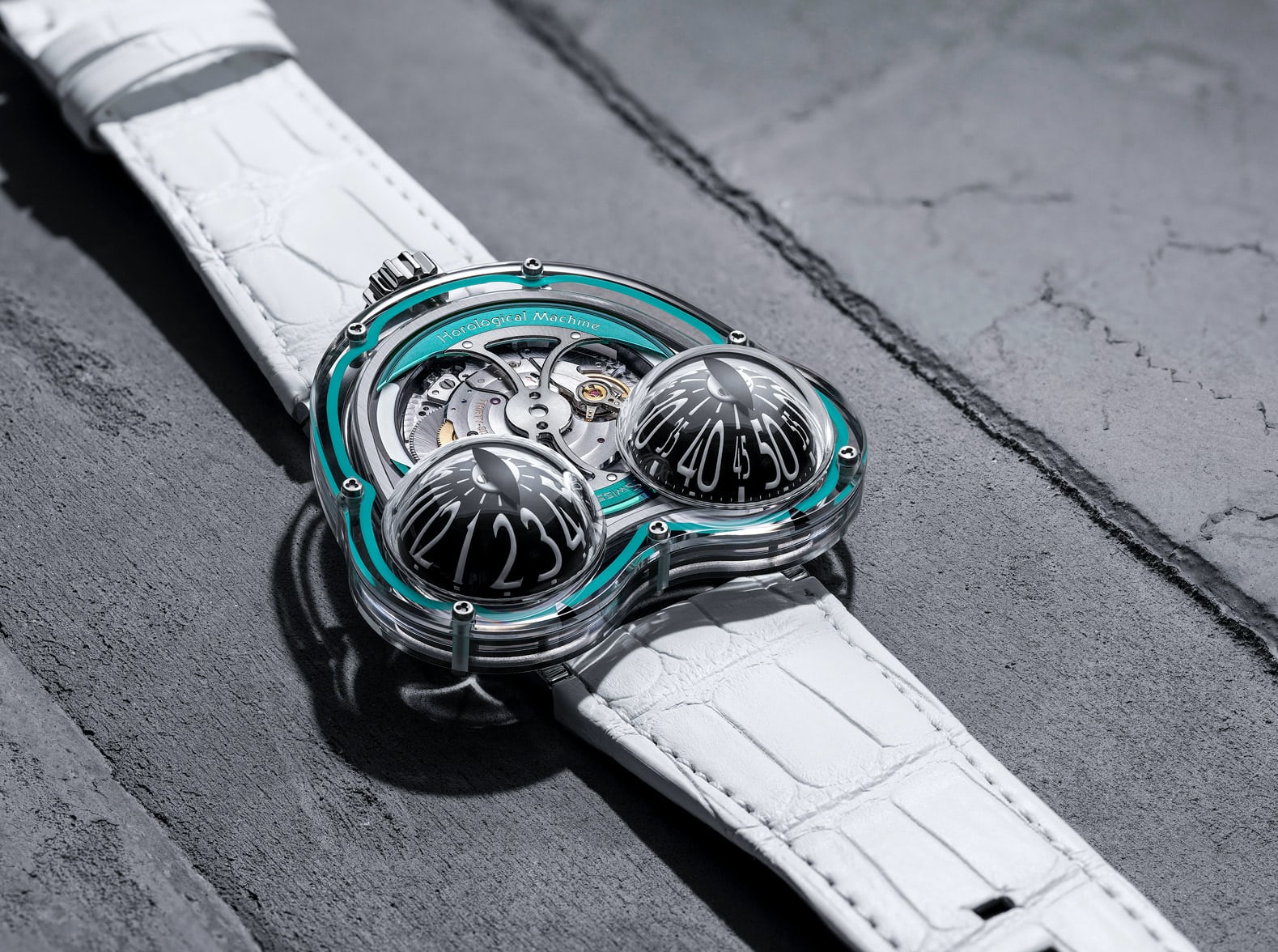 So, what’s changed for this tenth-anniversary model? For a start, the case is now made solely out of sapphire crystal, one of the hardest materials known to man. Up until now, you could only get the HM3 in titanium, red gold or black coated zirconium. To add splashes of colour, the gaskets come in either blue, purple or turquoise and are colour matched to the automatic ‘battleaxe’ rotor. The new case allows you to observe all of the mechanics powering the HM3 which have been designed for MB&F by Jean-Marc Wiederrecht of Agenhor. Before we get into the specs of the movement, let’s take a quick refresher course on how this watch works for its wearer. 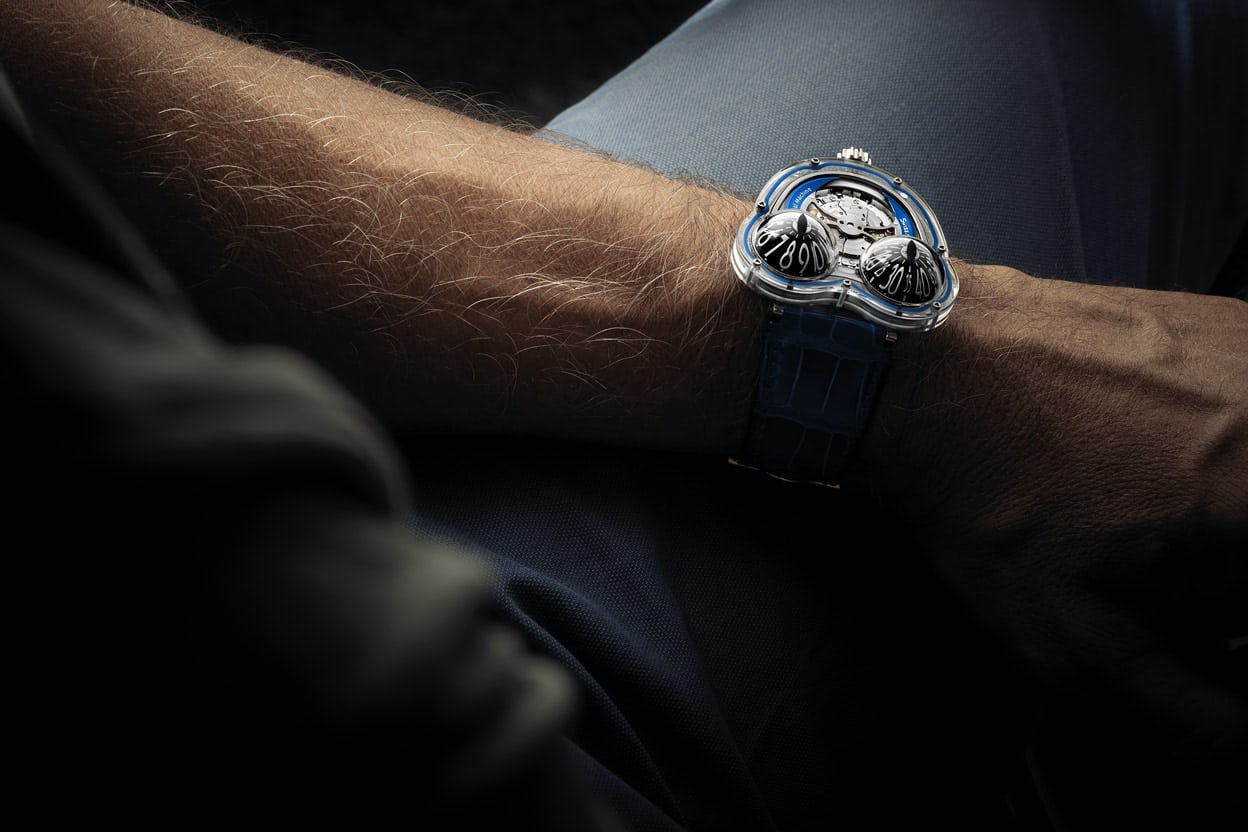 There are no seconds indications with the HM3, they’re unnecessary, but you can see whether the watch is running or not as the movement’s balance wheel is visible on the front. The automatically-wound movement sends its power to two large domes which protrude from the case. Thanks to the enormous numbers and the fact that the domes extend beyond the case, the legibility of the watch is excellent, and MB&F has even gone to the trouble of printing the numbers in lume. There’s also a couple of lume bars added underneath the rotor, so when it moves around at night, you get a cool illumination effect. There’s also a secret message hidden within the crown which uses Rayform light reflection technology to display the battleaxe logo onto surfaces via the crown. 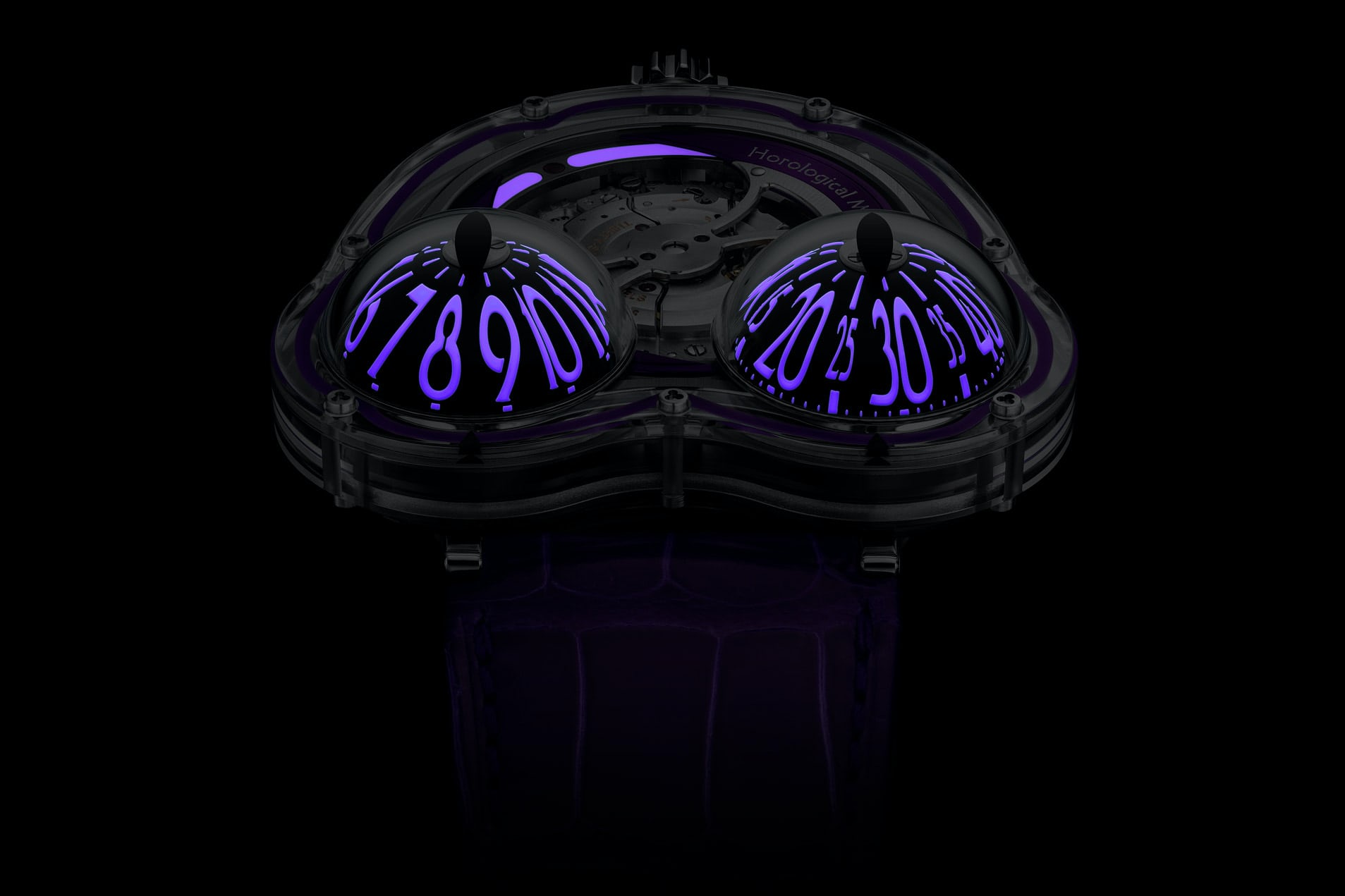 MB&F does not in-house make the movement powering this watch. Instead, it begins life at the Girard-Perregaux factory. The automatic rotor has been shaped to look like a battleaxe, and MB&F calls it the ‘Mystery Rotor’ as it appears to be symmetrical and therefore should not be able to wind the movement at all. To make it unbalanced, one of the ‘blades’ of the battleaxe has been cut down to a razor-thin edge, providing just enough imbalance to allow the rotor to wind the movement efficiently. The rotor is made of gold and titanium for the Frog X, and only gold for the regular Frog, The movement beats at 4Hz, although MB&F hasn’t told us how long it’ll run for (why would you want to take it off?). 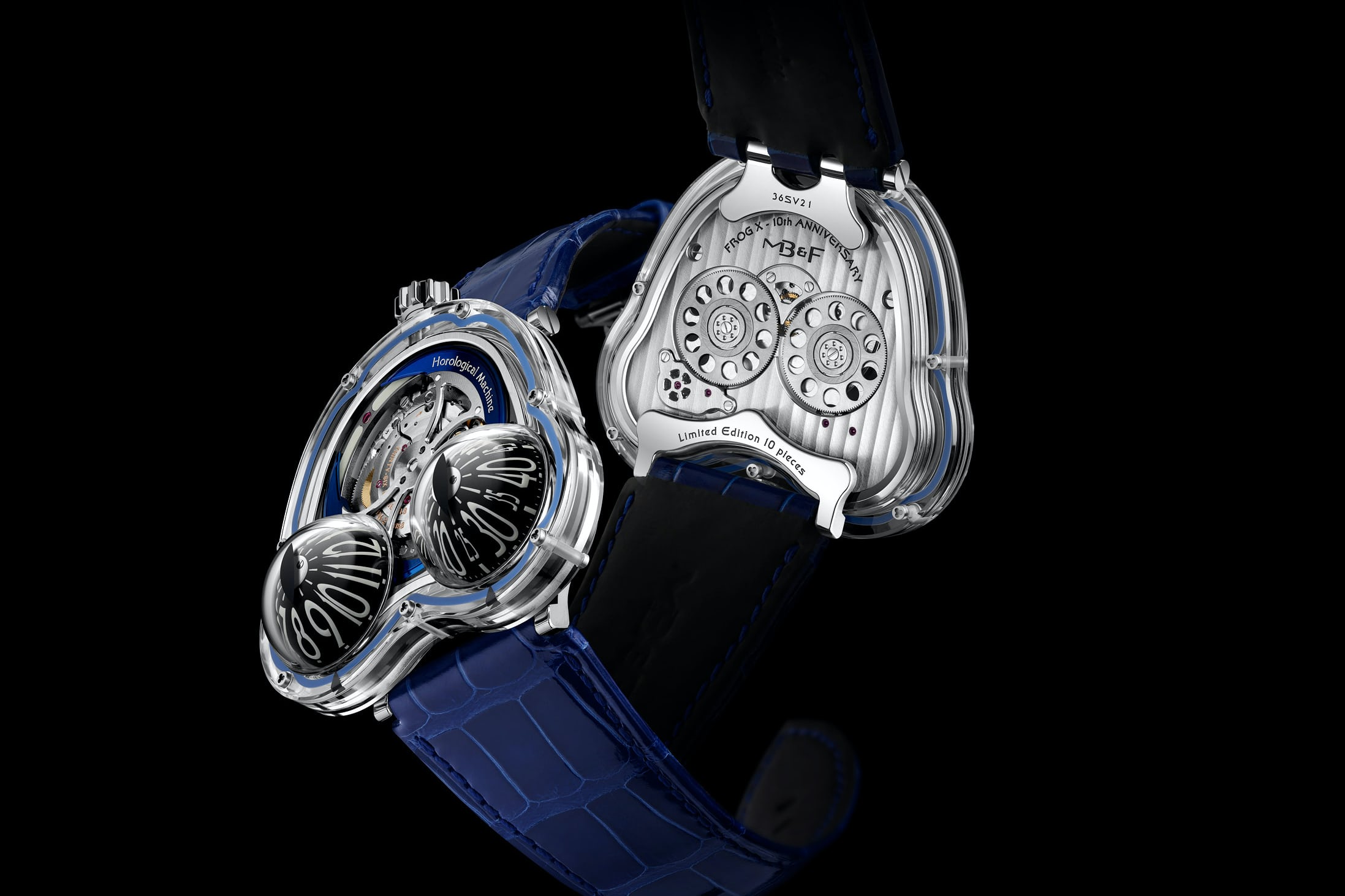 The movement sits inside an oddly-shaped case which measures 48.3mm x 52.7mm x 17.5mm and comes on either a purple, blue or white leather strap depending on which colour Frog you choose. Prices start at $152,000 as expected for a watch like this, and each version is limited to just ten examples.